Launching way back in 2008 the Vauxhall Insignia replaced the ageing Vectra and consigned the badge famously tarnished by Clarkson to the history books.

It underwent a facelift in 2013 and has latterly been fitted with Vauxhall’s new Euro 6 engines. Spacious, middling-to-good looks and well equipped, it’s precisely placed to compete with the VW Passat and Ford Mondeo, yet I confess it’s a car I’d barely noticed. 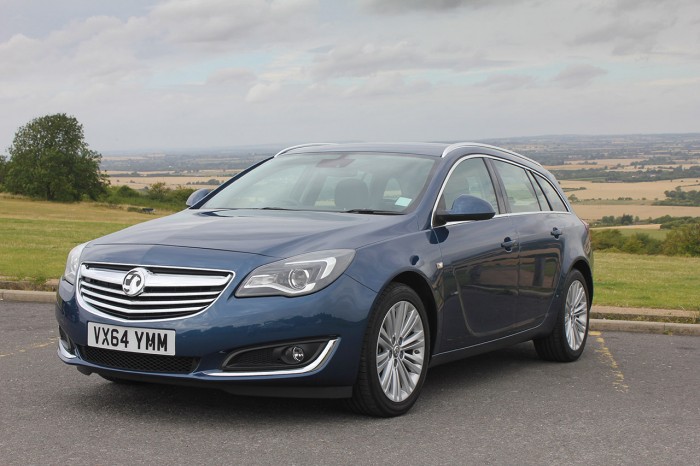 The gauntlet was thrown down at a recent event when I met a business manager from Vauxhall and began to talk about cars. We soon moved on to what I drove, a Passat CC, and he replied without hesitation, ‘You must try the Insignia’. Having never considered Vauxhall to be much of a challenge to VW, I jumped at the chance. Fast-forward a few weeks and I’m in the driving seat of an Insignia Sports Tourer. 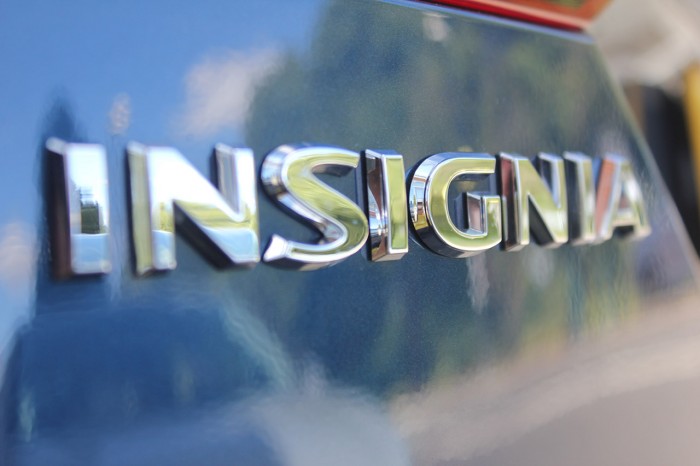 Aesthetically the Insignia’s heft and solidity lack the sharp sleekness of the Passat and Mondeo. The front and rear overhang are somewhat bulbous but the high shoulder-line and gradually sloping roof, accentuated by the more extremely raked window line give it a sporty and dynamic side profile. Liberally applied chrome accents and the distinctive front LED daytime running lights allude to quality. 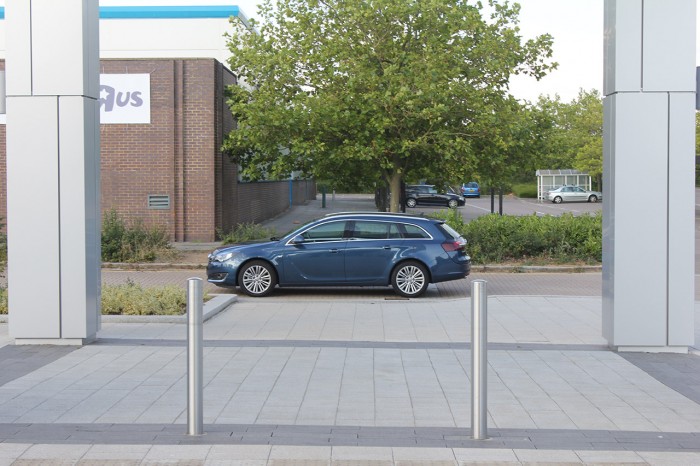 The interior is a far cry from Vauxhalls of old. Build quality, although a notch below VW’s, is nevertheless very good.

The dashboard is well designed with a massive eight-inch touch-screen display taking pride of place. Heating controls are logically arranged beneath and the one criticism is the dull speedometer.

Tech Line specification has the mid-range unit which looks as though it was designed by someone with a penchant for everything vanilla. Bland in the extreme, an upgrade to the digital version would be a worthwhile investment. But this is a small criticism, it works well and the in-dash display is well conceived. There’s plenty of storage space with a large glovebox, several cubby-holes and a large storage box between the front seats. A rear armrest is only available when specifying a leather interior. 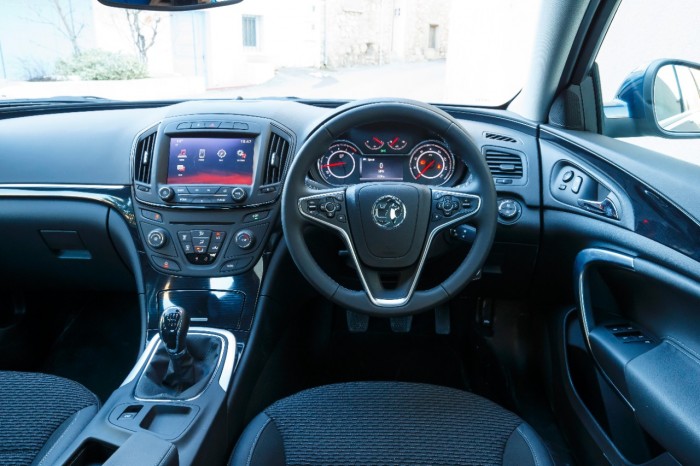 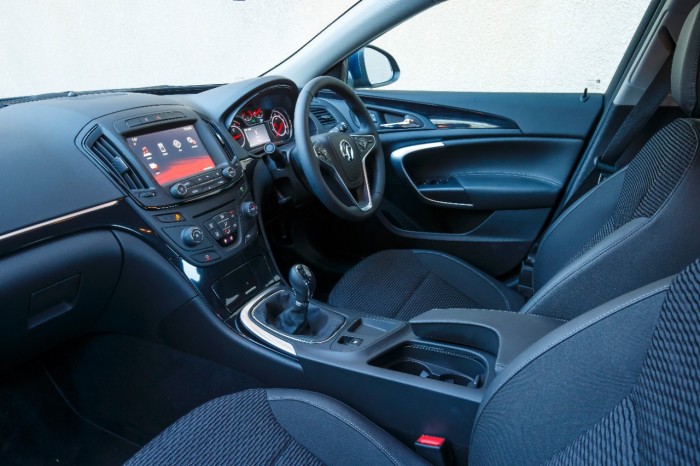 With regards to the entertainment system it is among the best I’ve used. Phone connection is straightforward and comprehensive, navigation is unusually good for standard kit (although an on-screen speed limit display would be welcome) and the DAB radio is good, save the occasional silence when switching to a stronger signal or FM.

One pleasing detail is how the air conditioning fan hushes when a phone call is made. Having become used to the quirks of the voice recognition (the steering wheel button gives access to all commands while the on-screen button only supports options for the current activity) it works seamlessly. 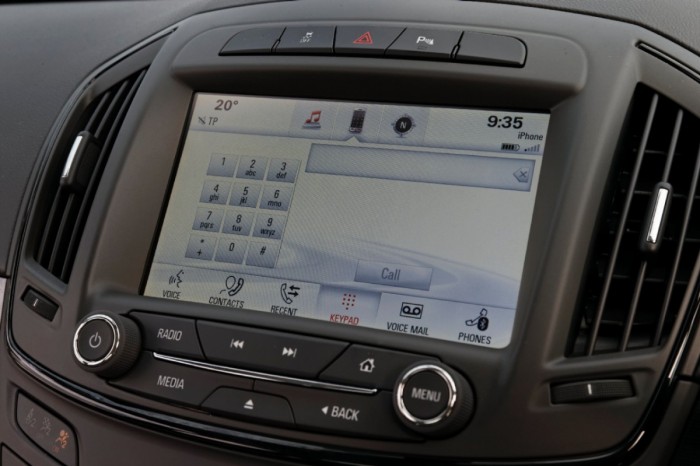 Driving the Insignia is a pleasure, particularly on long runs. We drove the 2-litre 170PS ecoFLEX ‘whisper’ engine.

Starting is more of a bad cough, but on the move it is indeed extremely quiet, often impossible to hear at all. Its turbo is fitted with an electrical actuator to spin it up quickly, significantly reducing lag and resulting in a responsive and impressively torquey engine that never fails to deliver power when required.

The suspension soaks up bumps admirably, and while this comes at a small cost in terms of body-roll, I rarely found myself pushing the car to a degree where it became apparent. Steering is precise with good turn-in and the ride quality and grip are excellent.

On less than perfect road surfaces the tyre noise could be uncomfortably bad, however our car was fitted with optional 18-inch alloys and Bridgestone Potenzas which I’m prepared to blame for this. 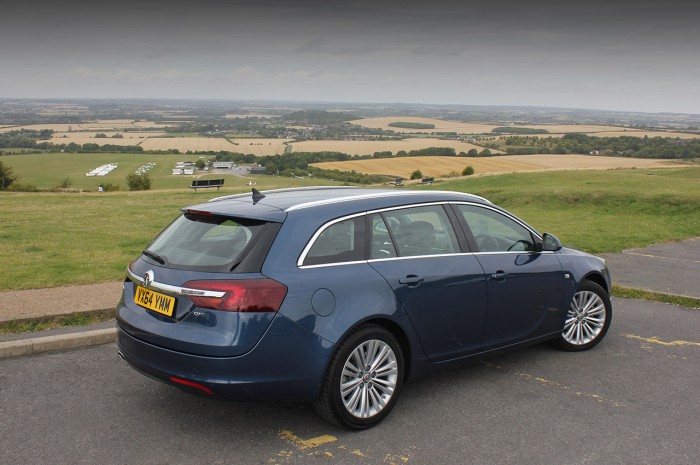 One minor drawback of Euro 6 compliance is that the car periodically needs to be topped up with AdBlue diesel additive. Normally I wouldn’t have mentioned this but unfortunately while we had the car it went into a wild panic, telling me every few seconds it needed AdBlue. This began with over 1,000 miles to go, continued until we returned the car, and nothing could be done to get rid of the message. It obscured all dash information including speed (I rely on the numerical display) and cancelling would only suppress it for a few seconds. 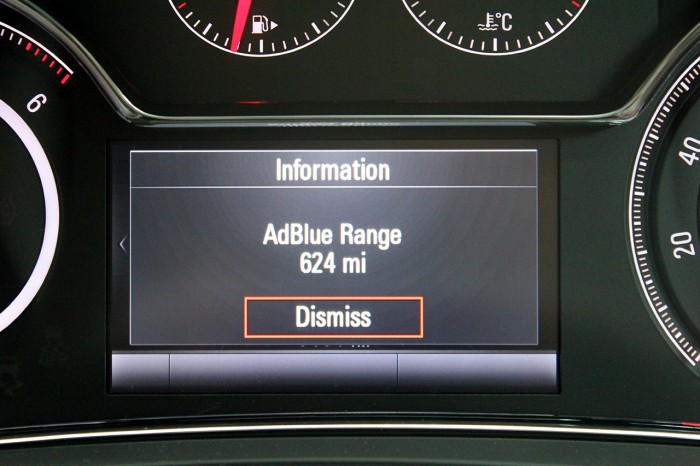 Only the conventional ignition key feels out of place, but a keyless ignition is available as an option along with just about anything else you could imagine. Our car was specced with the optional electric tailgate, which loses its novelty factor after a few minutes. 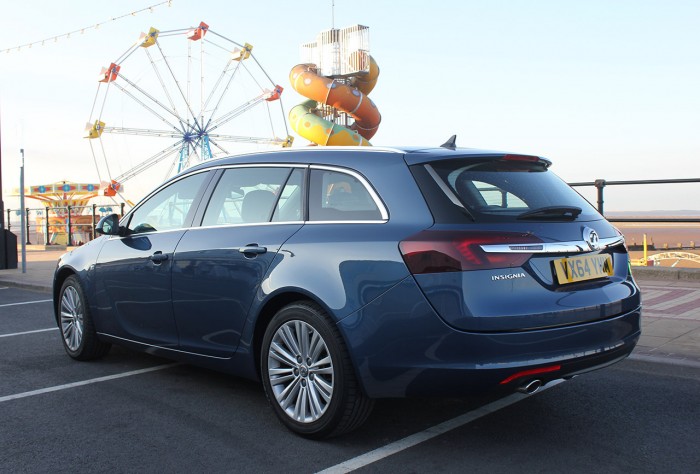 I’d have far rather paid a little more for parking sensors. At 4.9m long the car is no baby and after a week’s driving I was no closer to guessing where its extremities lay. A small mark on the back of the car suggested a previous tester had found one of them. Despite slightly larger dimensions than the Passat, load space is 14% down with seats flat, 17% less with seats up, but during my week with the car I never got anywhere close to filling it. 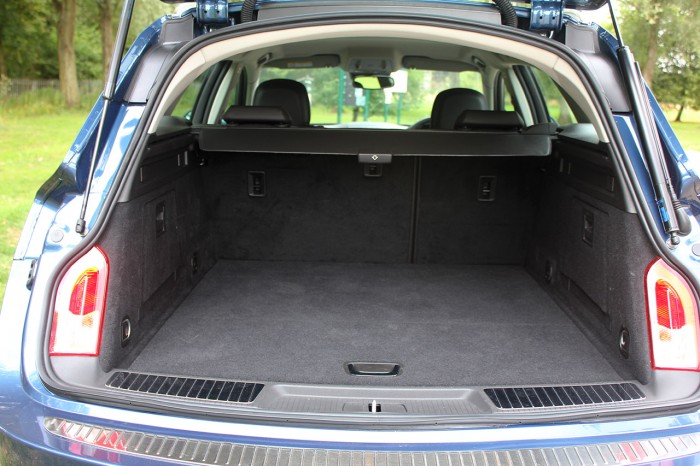 The Insignia is a truly good car, and elevates Vauxhall from its period of mediocrity. Had I not driven a Passat or Mondeo, I would be absolutely over the moon with the Insignia.

It looks good, handles and rides brilliantly, and devours the miles with the best of them. It boasts a high level of standard equipment, and a wide range of modern engines is available, from the 140PS 1.4 litre petrol turbo to the 325PS VXR 2.8 litre V6 turbo.

Several 2-litre engines are imminently being replaced with 1.6-litre versions. Added to the excellent entertainment system and ample space, the Insignia is a world away from the tired, facelifted 2008 car I was expecting. 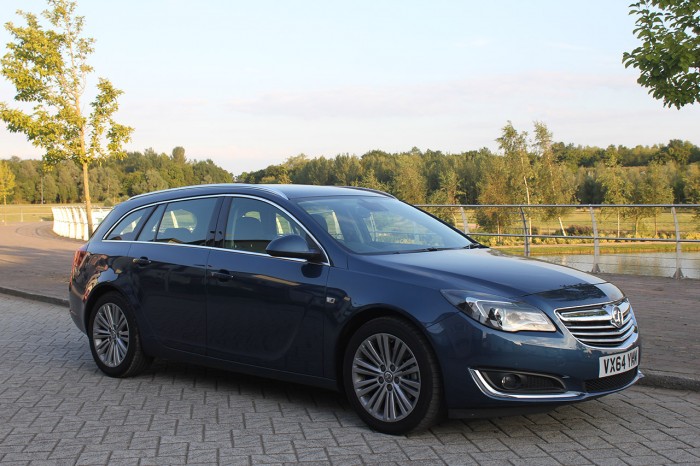 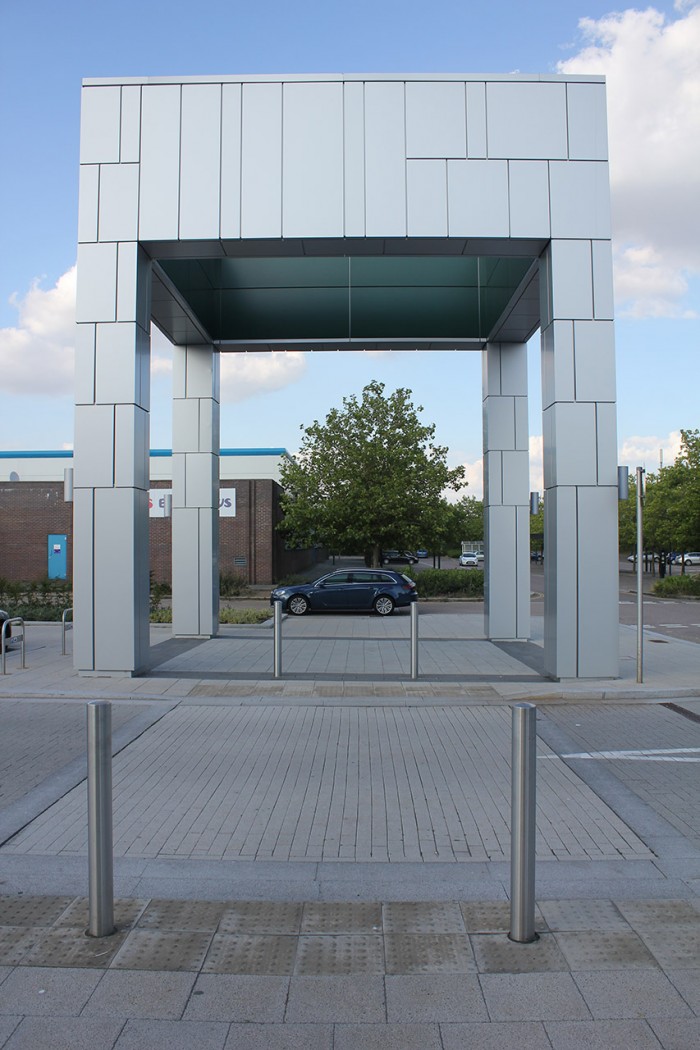 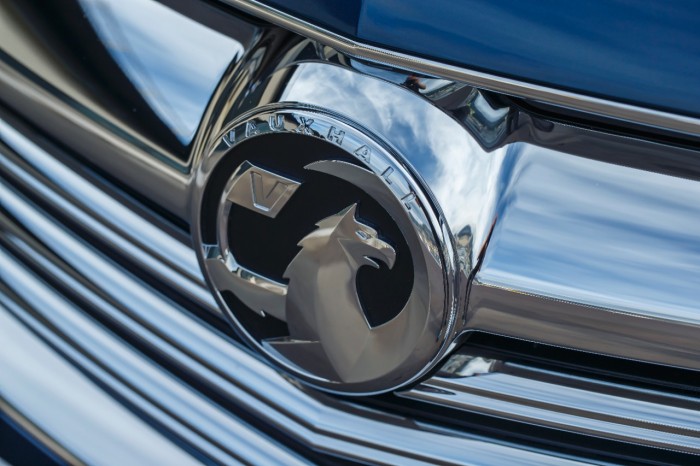 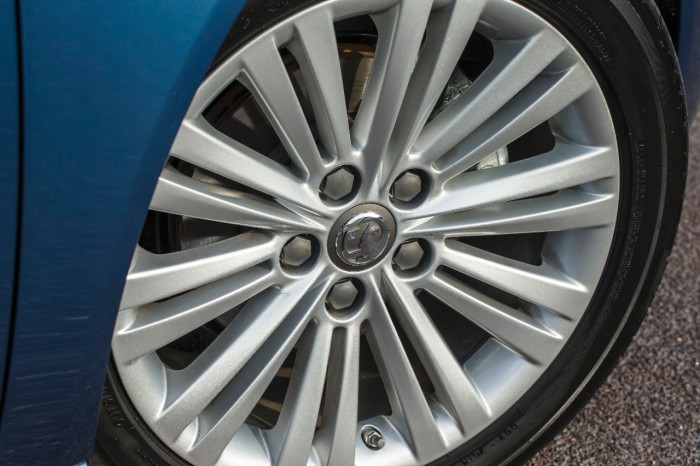 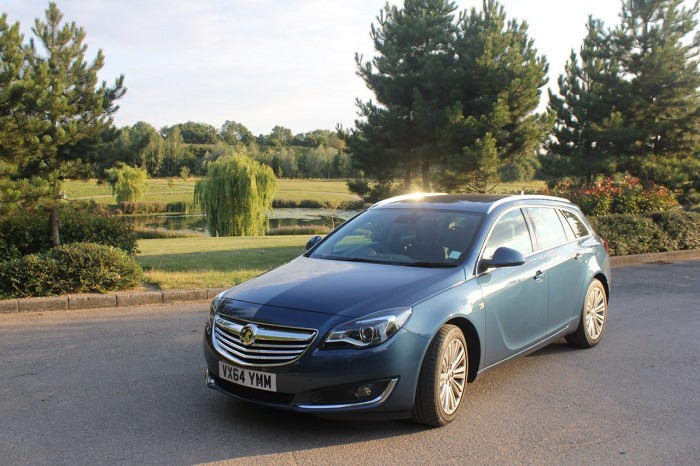 As tested (including pearlescent paint, electric tailgate and Plus Pack wheels and fog lights): £25,689