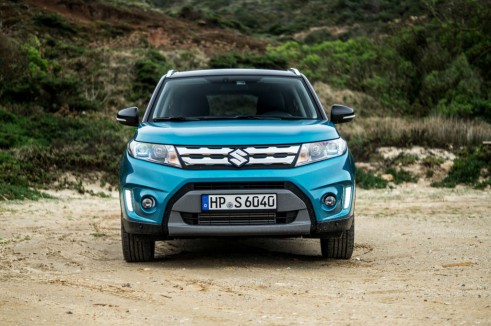 Suzuki launched the last Vitara in 2005…a replacement has been long overdue.  With our Grand Vitara review being one of our most popular, we headed off to Portugal to check out the all-new 2015 Vitara.

Powered by either 1.6 litre petrol, or a 1.6 litre diesel the Vitara will go on sale in April starting at a very affordable £13,999 in SZ4 trim. 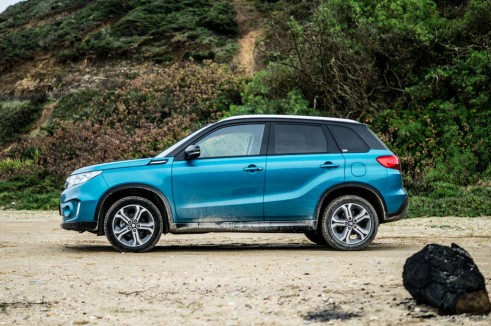 This all-new Vitara has left its somewhat rugged looking predecessors heritage behind. Instead, Suzuki have gone for a more on point crossover look.

Still retaining the classic clamshell bonnet and side louvres the front has a bold, modern appearance to it. LED running lights frame the outer edges of the bumper nicely and go well with the wraparound style headlights.

Along the sides things remain quite featureless with just a single style line running along the lower half of the doors and up to the rear arch.

A sharply raked rear bumper gives good angular ground clearance, whilst the rest of the back end looks very S-Cross in appearance.

Contrasting roof colours and customisation packs give the Vitara the ubiquitous ‘customisation’ that every manufacturer is striving for these days.

Overall it looks more soft-roader than off-roader, no doubt giving it more mass appeal when coming up against the rest of the Juke brigade. 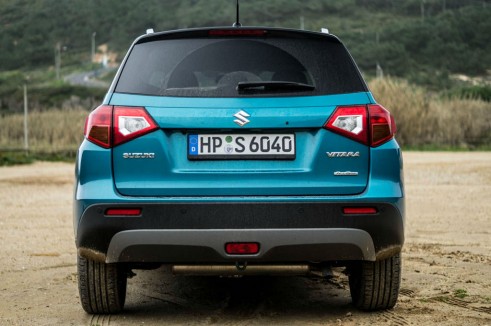 The 1.6 DDiS diesel engine produces 118 BHP and 320 Nm of torque, it will shove you to 62 in 11.5 seconds. On the road it drives very well, at speed – especially on the motorway – it’s a rather comfortable cruiser with minimal wind noise from the mirrors and good insulation from tyre roar.

Around town and over broken sections of road it soaks up the majority of bumps with ease. This doesn’t make it a soft ride, in fact it’s very well damped keeping control of body roll in the corners. A spirited drive shows just how well the new Vitara is set up. 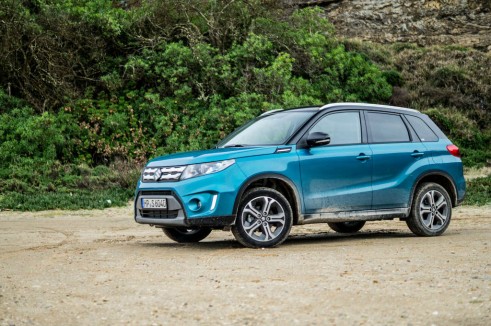 Its full off road ability is somewhat questionable, as the off road track we drove it on wasn’t challenging in the least. 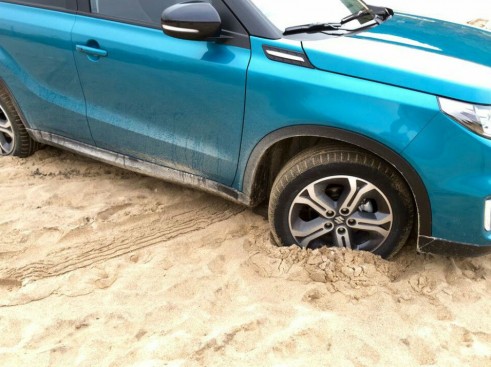 With this in mind we decided to test the Vitara a little further by taking it onto a very soft, sandy beach. Being on standard road tyres eventually we ventured too far and got stuck quite deep, no biggie this is a four-wheel drive after all.

Setting it into Snow mode and locking the diff we gave it some welly in reverse and managed to extricate ourselves from the situation. Not bad going for a fairly tame looking soft roader! 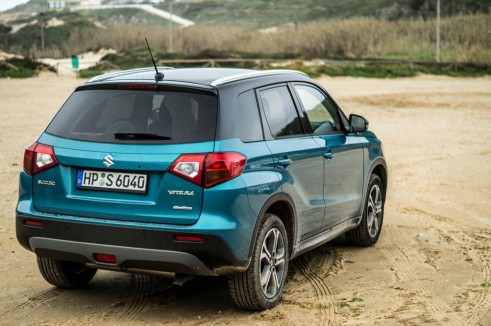 We also drove the 118 BHP 1.6 petrol in two-wheel drive form – this is probably going to be the biggest seller.

This means the Vitara comes close to the magical 120 BHP per tonne figure, which ultimately means a fun drive. And it is pretty fun, it pulls well when you need it to and returns decent MPG too; coming in at around 42.8 for Urban consumption.

It does however lack that beefy 320 Nm of torque that the diesel has, dropping down to just 156 Nm. It is very noticeable when you drive them back-to-back, but for around town with no off road use we would stick with the petrol.

Steering gives a very connected feel, it is well weighted and you get a direct response from inputs, a vast improvement over the Celerio’s setup. 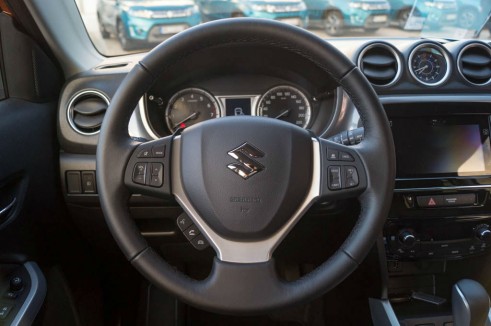 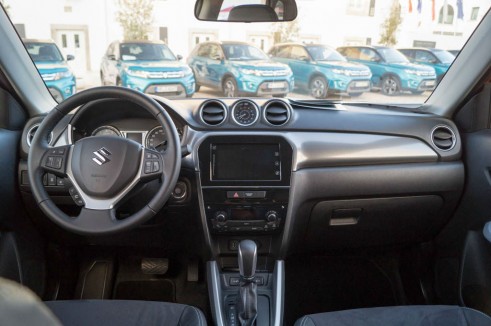 Inside the Vitara you find a clutter free centre console. A touchscreen interface handles all the infotainment systems, but thankfully the climate controls remain physical buttons.

The touchscreen is of a new generation we haven’t seen before on Suzukis, instead of being a third party slot in job this looks far more easy on the eye.

Running across the middle of the dash is a coloured piece of trim that can be customised to one of four colours, a nice touch to add a bit of individuality.

The ALLGRIP controls are situated just behind the gear lever for easy access and the part suede seats are a very smart addition to the SZ5 trim.

You actually get a lot of kit on the entry level SZ4: 16” alloy wheels, DAB Radio, USB, Bluetooth, Cruise Control, Auto Air Conditioning, Electric windows all round and projector headlamps are all standard.

Moving up to SZ-T and the alloys grow in size to 17’s, tinted rear windows appear along with the smartphone link and Sat nav.

Top spec SZ5 trim will set you back £17,999 for the two-wheel drive petrol variant, whilst the range topping SZ5 diesel with ALLGRIP will cost £21,299.

Dual tone paint is a rather pricey option at £800; both the Urban and Rugged styling packs cost £500. 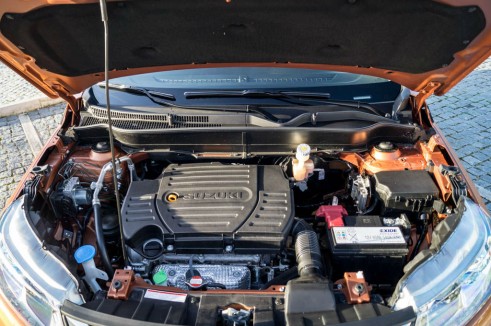 Yes the interior is a little plasticy, the doors being particularly scratchy in feel. But none of them are offense on the eye and at this price point savings have to be made somewhere.

Rear seat legroom is on the tight side but that is to be expected in a car of this class, headroom on the other hand is very good due to the cars high roof line. 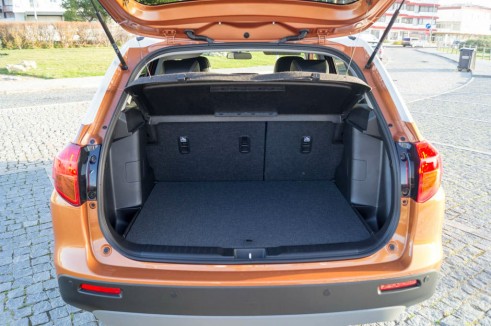 Boot space is reasonable at 375 litres and there is a split rear floor so there is more storage to be had beneath.

However with this being a four-wheel drive it doesn’t come with a spare wheel…which we think is pretty ridiculous. It should be standard fit on the four-wheel drive versions, not an optional dealer supplied extra. 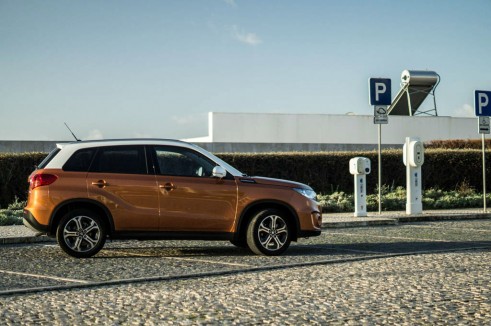 Suzuki have well and truly made the all-conquering Vitara a soft roader. It’s the same as the Juke…yes you can have it in a four-wheel drive but barely anyone does.

We can’t blame them really as the B segment crossover market is huge and that’s what they are now trying to compete with. Gone are the days you could sell a small, rather quirky four-wheel drive with little competition.

When the Vitara was first released in 1988 it was practically the first of its kind, now it has morphed into a crossover that you can opt for four wheel drive…if you really need it.

It’s sad in a way, especially how Suzuki have pitched the Vitara as having great heritage, but it’s a sign of the times and they have to move with them. 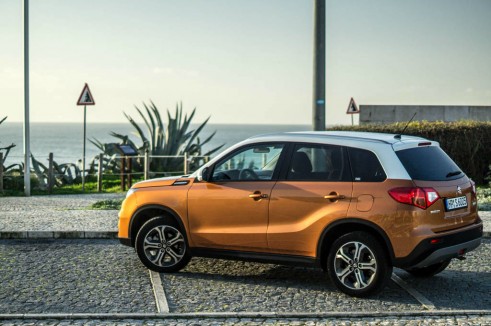 With regard to current competition it’s well up there with the Fiat 500X and the Nissan Juke. Ride is excellent for this type of car; the only thing that will let it down is some of the cheaper plastics in the interior.

If you can look past those you will have a superb, affordable B segment crossover. 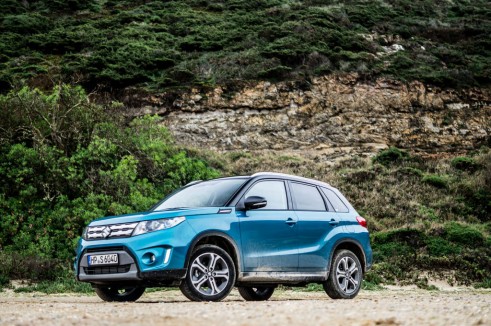 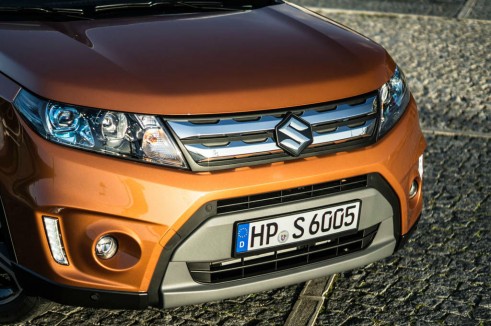 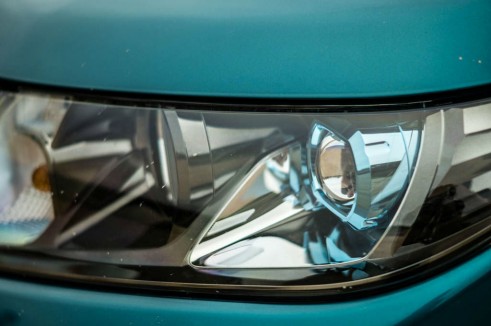 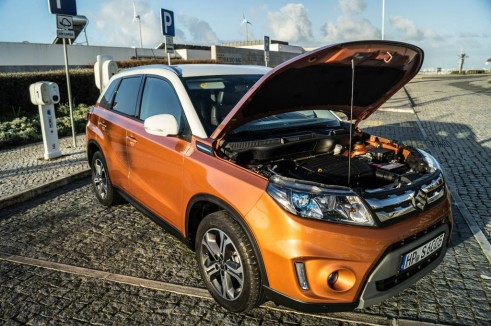 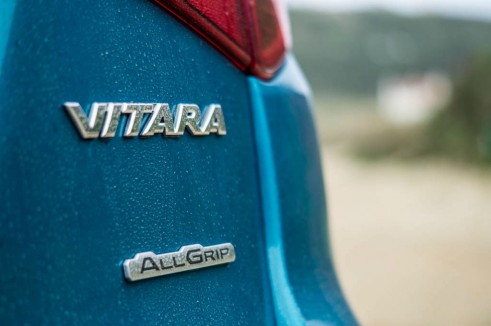 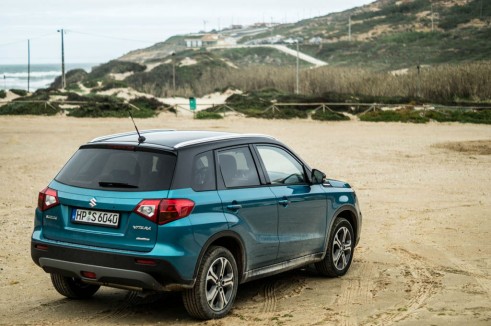 2015 Audi R8 Revealed Ahead Of Geneva