2015 Audi R8 Revealed Ahead Of Geneva

Following some interesting pre-reveal exposure to the media, the second generation R8 has finally been tapped in prior to an official unveiling at Geneva.

And what a cluttered market place it finds itself in compared to its predecessor.

With the new NSX, Ford GT, Ferrari 488 and the Mclaren 675 LT, on top of the rest of the readily established competition, the R8 has quite a fight on it’s hands in winning the affections and chequebooks of punters.

There has never been so much choice. 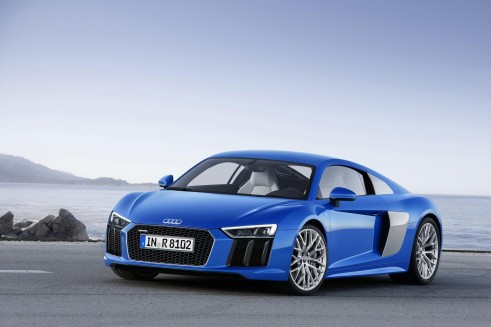 Visually the second gen’ R8 isn’t quantum leaps from its forbearer but adopts certain design queues from recent concepts and the rest of the Audi range, whilst also being indicative of where they’re headed.

It pulls off the trick the first one nailed so well of being expensive looking, exotic in silhouette but relatively subdued and dignified especially by comparison to some of its gratuitously aggressive Italian contemporaries.

The new R8 is certainly more angular, but only in accordance with the new overall Audi style directive.

There are however one or two complaints.

The awkward strakes that adorn the flanking grilles at the front and back. Whilst they’re likely something we’ll get used to, on initial reveal and contrasting with the bright hues in which the car is initially dressed, they look out of place. Minor details also suggest a crisis of identity.

At the risk of sounding like a total stick in the mud, i’d like to pledge my support for brand identifiable exhaust shapes. Audi RS has for me been largely defined by those oval cans.

They were binned a couple of years back for the circular arrangements found on the gen’ 1 R8 facelift. Now, they’ve changed again, to something completely unrecognisable. Jaunty oblongs hanging off the flanks that appear to have been lifted from the Skoda Octavia VRS.

What happened to the delicious shoulder blades that gave the original such a confident beach hunk stance? Broken up and scattered like ruins of a time gone by. 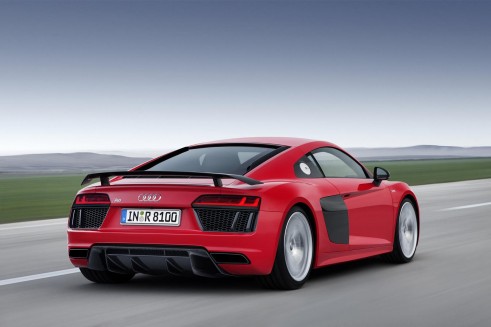 As ever styling is subjective and I am in no doubt these will avalanche out of the dealerships but considering the original R8 looked so effortlessly cool, confident and impeccably defined, the dusting of awkward aesthetic fuss that has appeared on this new one seems at odds with a badge that is now a household name in of-the-moment cool motoring. 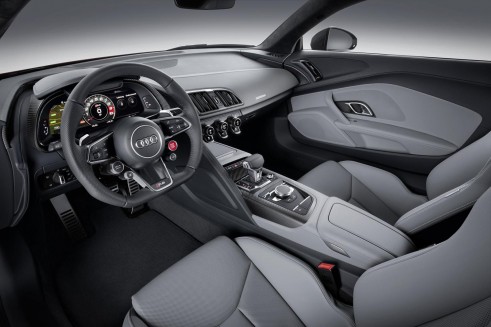 Where the good news comes is on the inside.

Audi are categorically on an unstoppable role when it comes to styling appointing and equipping interiors. With none of the excessive panto fuss of the Huracan sister car, but all of the genre defining suave of the original; the new R8s interior comes simplified, angular, thoughtfully penned and expensively appointed.

The days of the cockpit button-fest are well and truly over. The TFT display and navigational wheel mounted nobs replace the central screen and buttons that dated the original the most in its twilight days.

Whilst continuing on from where the new TT left off, the new R8s cockpit is well defined as the more premium experience. 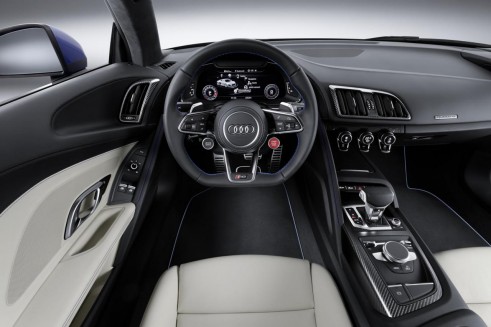 Where the new R8 appears to catch the eye philosophically, is on the spec sheet. This is a more serious car.

It would appear that at least from Audis viewpoint, there are bigger fish in the sea than the lesser 911s, as from launch the Carrera crushing V10 is the only option in 540bhp standard and 610bhp V10+ tunes.

Both are mated exclusively to a seven speed dual clutch transmission which is alleged to be smoothened and quickened further still over the already impeccable unit in the gen’ 1 facelift. 62 is taken in 3.5 and 3.2 seconds respectively.

The body is 40% stiffer and the car is overall 50 kilos lighter than its predecessor. In terms of performance, at least in + guise, the R8 sits shoulder to shoulder with its big bad understeering bull brother.

Although a V8 will be along shortly, Audi is making a statement of intention coming out guns blazing from the off. It is to go toe to toe with rivals the likes of which have always been above and beyond the reach of its predecessor.

Expect to first see the new R8 in the metal at next weeks Geneva Motorshow before going on sale in the summer. 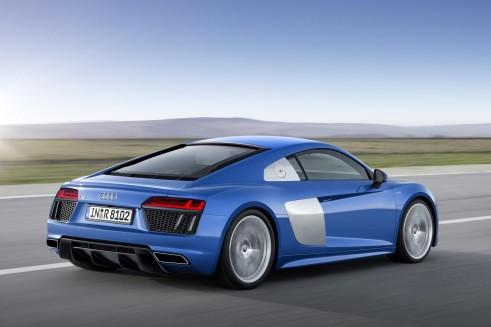 Side note: does anyone else see elements of the outstanding RSQ concept used in iRobot over ten years ago in the new R8? 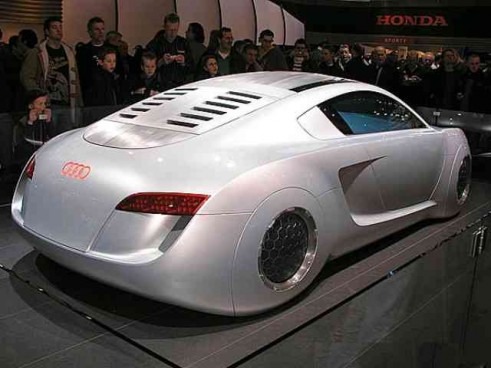