Here it is then, the long awaited second generation RS3, and the formula doesn’t appear to have changed an awful lot.

In terms of power train, this is a cause for celebration. That seminal 5 cylinder turbo lump was one of this cars rather dynamically flawed predecessors few redeeming features.

This isn’t billed a “world beating” car for nothing. It had better cut the dynamic mustard this time out though, as the subordinate S3 is reported to be a fantastic steer. 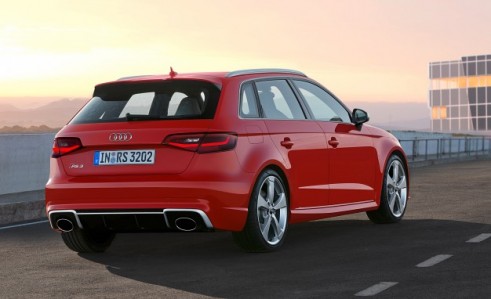 The gestation of the new Audi RS3 has been a rather public affair. Psychedelically camouflaged prototypes have been flogging the ‘Ring for every last drop of dynamic finesse they can squeeze.

The over-endowment of exhausts has been a subject of keen criticism in the hatchback segment in recent times but I’m personally happy to see the proper dual oval exhalation equipment at the rear indicative of a true “Audi RS” item.

The styling by ‘roid rage hyper hatch formula continues elsewhere with recognisable bumper sinews off the delicious A3 Clubsport Quatto concept of earlier in the year.

Regrettably though, the iconic ‘Quattro’ arch bulges have been omitted, along with the Clubsport Quattros voluptuous ‘booty’, so in spite of the addition of those ovals we’re still met with a fast A3 as opposed to definitive “RS”, aesthetically.

Good job like most Audis, the A3 is fairly handsome in the first place. 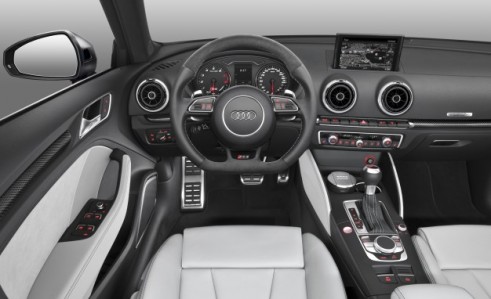 Good news on the inside was implied given that this is an Audi. They can’t seem to go wrong with beautifully designed and built interiors that know no equal although it is sad that the fantastic digital instrument binnacle hasn’t made the jump yet. 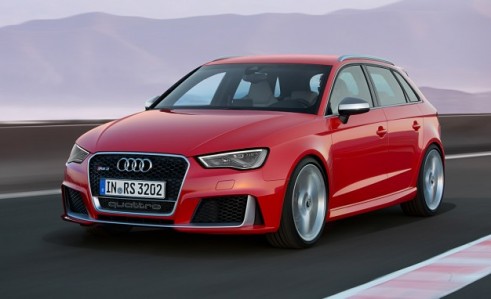 Expect the new RS3 to make an in-the-metal appearance at next years Geneva show with it reaching customers in the summer.

It’ll have some stiff competition though as the RS3 is but a brick in the wall of the second hot hatch renaissance.

Hondas Civic Type R rebirth as well as the gen’ 3 Focus RS among others, should be making their mark alongside the RS3 at Geneva in March.

We’re eager to see whether they’ll be troubling this near 400bhp brute and whether its any more than the blunt instrument that its predecessor was even on its best day.