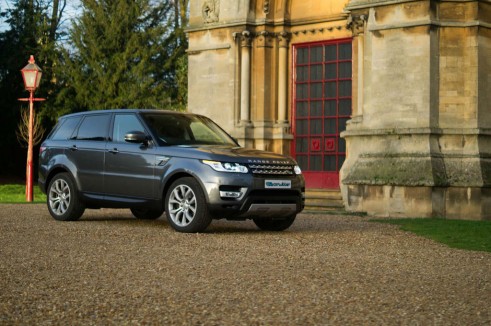 Range Rover released the all new Vogue in September 2012 at the Paris Motor Show, but starting at £71k it’s rather pricey. However there is an answer, its sibling the Range Rover Sport starts at £51k, that’s quite a saving! 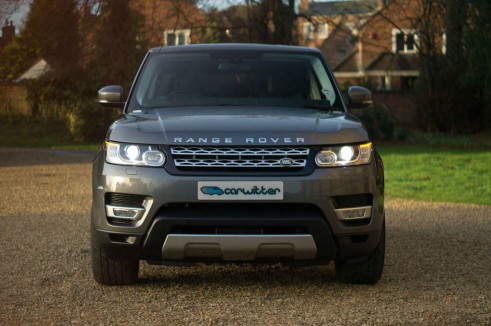 From the outside the all new Sport is gorgeous. A mash up of Evoque and Vogue lead to a masculine, classy look. LED daytime running lights surround Bi Xenon headlights – which are a work of art in themselves, looking more like a camera lens than a headlamp – orange running lights pierce into the front wing giving this Range a unique light signature, at night it looks very smart. 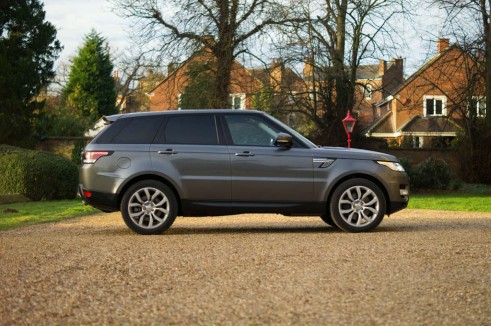 A bevelled grille gives the car its Evoque lines, less squared off than the Vogue it’s the start of the Sports sleeker looks. A large flat clamshell bonnet is punctured by black gloss air vents, giving the Sport up to 850mm of wading ability. Toward the rear a falling roofline pinches the glass against the Sports almost flat waist, making it smaller and less boxy than the Vogue, another Evoque trait.

The back features a deep spoiler and a protruding boot, a rear skid plate sweeps up into the bumper giving the Range a wider stance, Evoque lights are blended with the Vogues to create small but neat rear lamps. 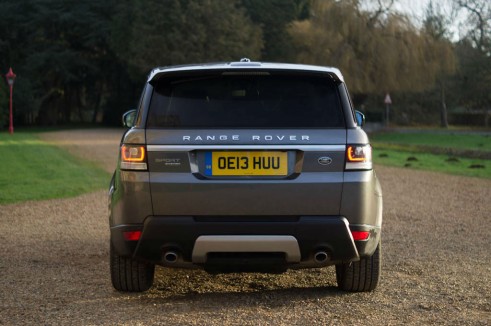 As soon as you clamber up into the Sport you notice the superior driving position, you sit higher than almost everyone. Looking over the roofs of cars in front, you get the full picture of the road ahead. Before you stretches out that wide, flat bonnet, judging the front is never an issue!

As you set off you notice how easy the steering is, nicely weighted when you add more lock but very light to start with. It feels very detached though, but that’s to be expected in a car of this size.

Pin the throttle and you are met with a great big glob of surging power, this is the case no matter what gear you are in, or what speed you are travelling. The 8 speed ZF gearbox kicks down and accelerates without any lurching or jarring, its silky smooth and keeps pace effortlessly. This is how all automatic gearboxes should be! 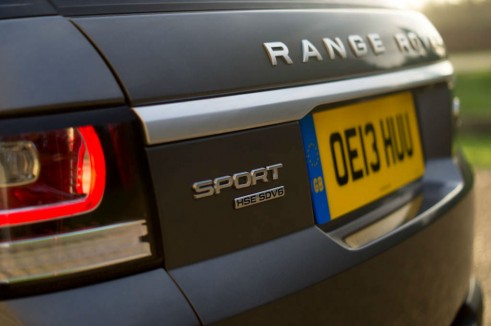 0-60 may be 6.8 seconds which is quick enough, but the Sport builds speed like you would not believe!

Before you know it, you look down at the speedo and you are well on your way to court with 6 points and a ban. You simply don’t notice the speed you are travelling at, you are cocooned from all the normal sensations of momentum, it gets quite scary.

On a motorway trip our speed kept creeping up higher and higher without us realising…we ended up putting the limiter on to be safe. 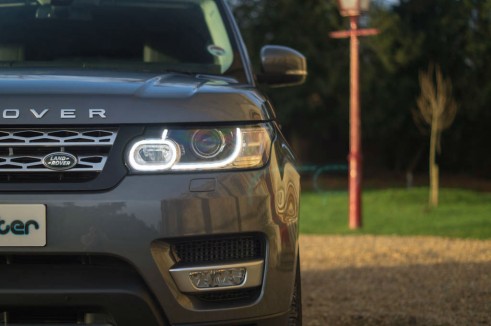 Overtaking is a breeze, all that torque means it picks up pace with ease. The Sport is far less wallowy than its bigger brother, cornering still gives body roll but nowhere near as bad as the ship like yawing we have felt in the Vogue.

You can feel the Range Rover Sport is much stiffer sprung, you feel lumps and bumps in the road through the chassis which is good, it at least gives you some feedback.

We have also driven the Sport fully off road at Gaydon, all that needs be said on that subject is that its such a shame 90% of these vehicles will never leave pristine tarmac. Wheels in the air, wading, crossed axles, boulders, sand; anything thrown at it was a taken in its stride. What a machine! 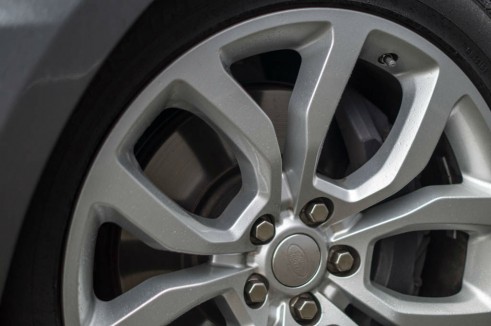 One thing that was less confidence inspiring were the brakes, whilst they are great along everyday driving conditions – providing good feedback and a very graduated feel to them – under emergency braking from 50 MPH they just didn’t seem to have enough bite.

This was however in slightly damp conditions, but it felt far too long to come to a stop for our liking.

Over 310 miles we achieved 30 MPG. 150 of these were town miles, the rest were long distance journeys over motorways and A roads. Land Rovers claimed Urban MPG is 32.5 so we weren’t far off that, combined is quoted at 37.7 MPG. 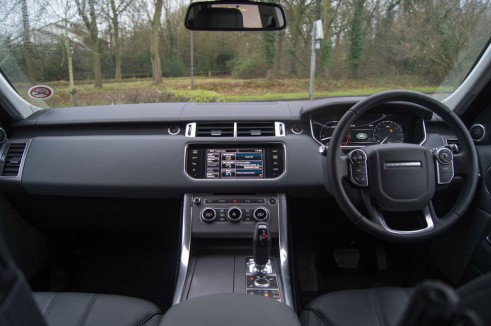 Inside, the Sport is uncluttered and minimalist. The heater controls are the only real buttons in the centre console, everything else is controlled by the large infotainment screen. Swapping between these menus has a slight bit of lag, it would be nicer if it was instantaneous. 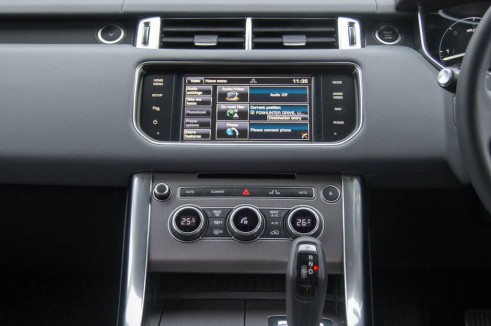 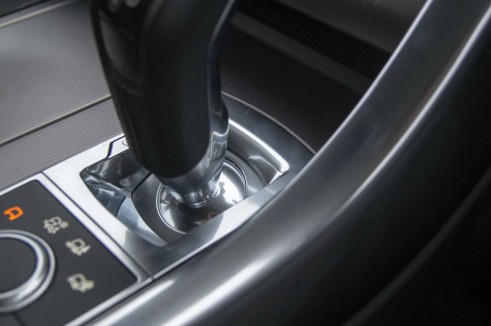 The detailing around the gear lever was something we loved, machined aluminium perfectly polished to give the automatic ‘box a really mechanical look to it. There are dashes of bright aluminium all over the interior, soft dash plastics are mixed with a pin stripe light beige trim, it’s all very classy.

The standard stereo was a bit of a disappointment, it lacked any real flair or crispness at higher volumes…the 19 speaker 825watt basic Meridian setup will set you back a grand. 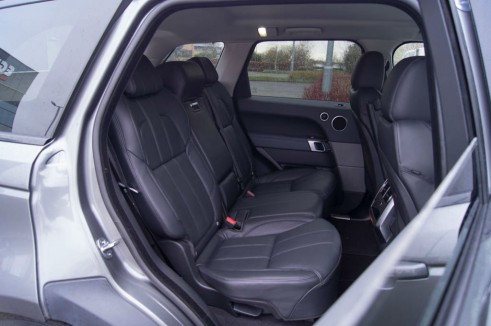 In the back the rear seats have ample leg and headroom, despite the falling roofline. There is easily enough room for 4 adults to travel in comfort over long journeys. 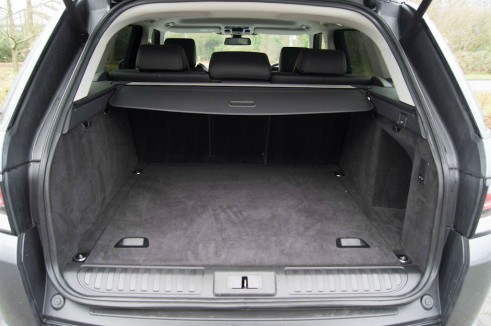 Boot space is generous at 784 litres, its lip free access makes loading very easy. Oh and if the Range is too high you can lower the car by 50mm for easy access. You can lock this into place up to certain speeds, useful if you have a tight fitting garage, or just want the Range to look ultra-mean when pulling up at soirées. 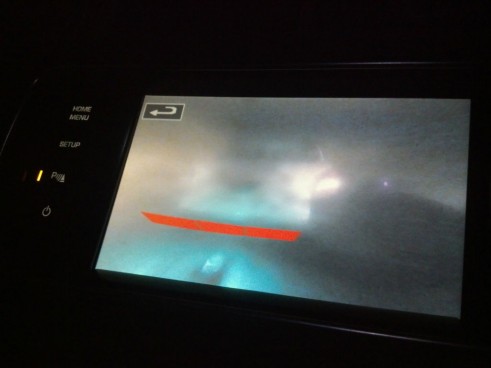 That rear view camera we mentioned does become rather pointless though, as soon as you step out onto those damp, dirty winter roads the rear of the Sport becomes caked in debris…along with the camera. It really should have a water jet to clean it, or a cover for when its not in use.

Instead you are left reversing into what appears to be a deep sea wreck, or an impressionists take on the world behind you.

The level of detail on the Sport is superb, a small circular plaque of the concept sketch is cited in the B pillar – it can only be seen properly when both front and rear doors are open.

The headlights have text around the lens’s, puddle lights project ‘Range Rover’ onto the floor, there’s even a hidden tow bar which is electrically deployed from the boot. A lot of thought has gone into making the Sport feel special, and it certainly does. 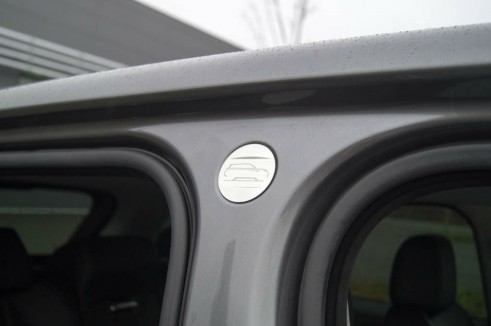 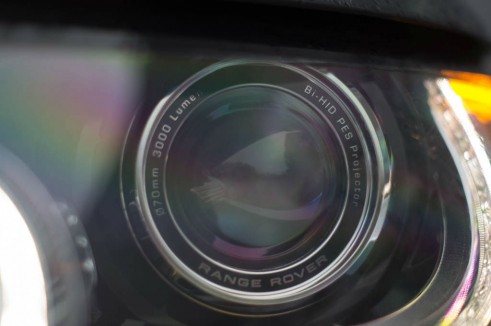 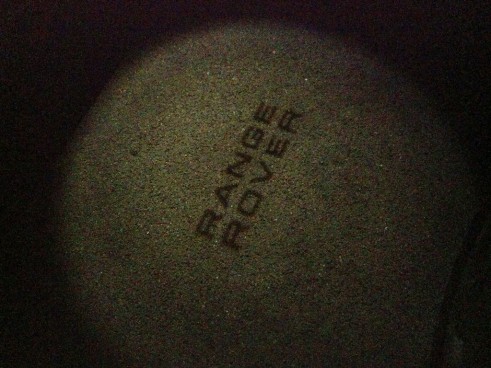 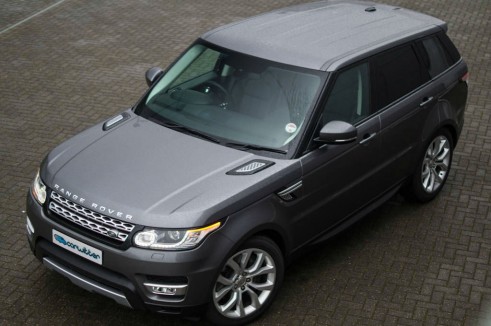 So, our test model was £10k cheaper than the basic Vogue…but it has the same style and class, its better looking, and can still seat 4 comfortably, it’s also a killer off road machine. So why would anyone buy the Vogue?! 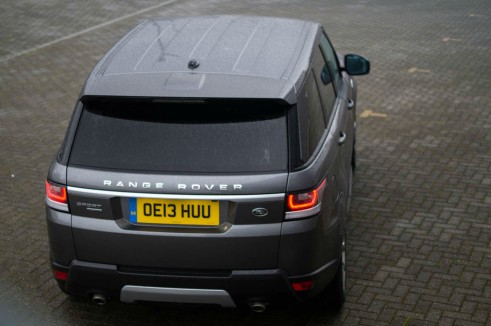 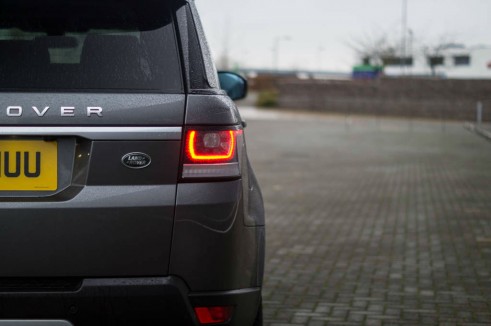