The 2017 season was won by Keith Cronin and Matthew Edwards in their Fiesta R5. Four times champions, they beat the competition in the second leg of the day by just 0.1 seconds. That’s how close these guys get to eachother.

We were invited along to the WRC Media Day to get a taste of rallying for ourselves.

This years Dayinsure Wales Rally GB takes part on the 26-29th October, with a Rallyfest stage being held at Cholmondeley Castle for the second year running. It’s a very short stage and just aims to bring the rally cars to the people en mass. 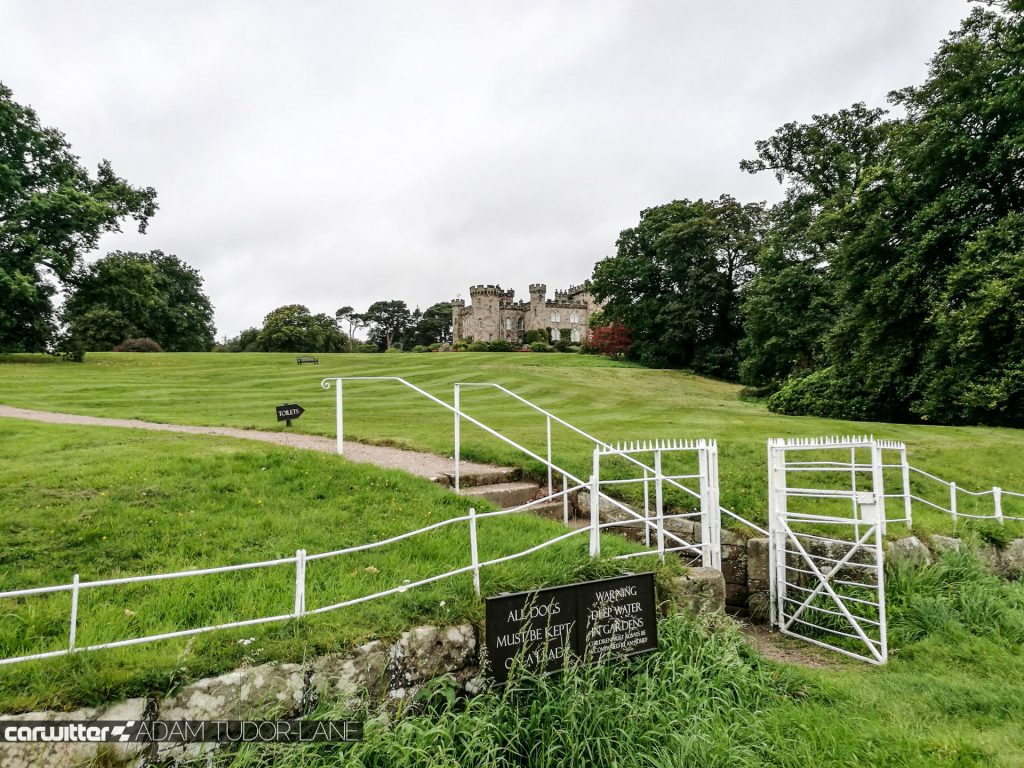 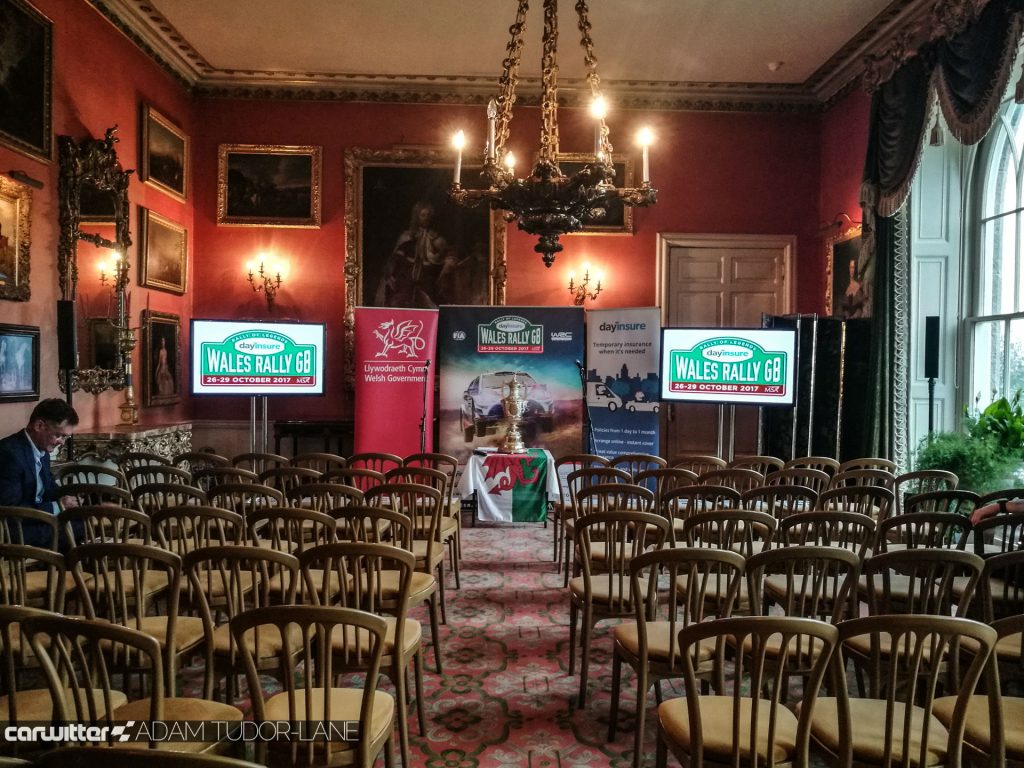 After a press conference detailing the event, local support, sponsors etc it was time to get some passenger rides in.

Strangely, and oddly enough even though this was the ‘WRC’ media day, there were no current World Rally cars there. Nor any teams, nor any current drivers. And by ‘day’ they mean fours hours of not so slick organisation.

But, we had fun nonetheless. 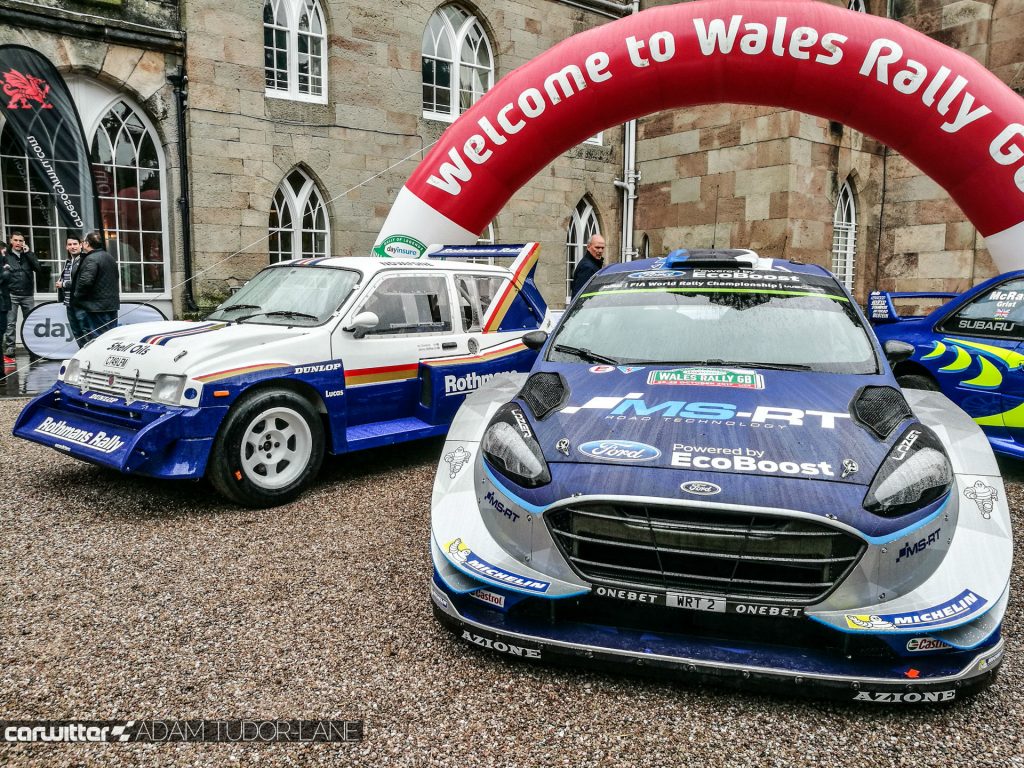 Donning a Hans Device for the first time ever I helmetted up and waited my turn for a ride.

The next car in the queue was an old 1300cc VW Beetle with some rather full on Safari style lights and roof rack, apparently it’s steeped in history…but I didn’t fancy going in that.

Behind it sat a Ford Escort RS Cosworth. When I was younger I had an insane Kyosho Landmax 1:8 scale petrol powered remote control car. It was in the classic fluorescent orange Repsol colourway with Carlos Sainz and Luis Moya on the side windows. It was even 4WD and could hit speeds of 70 MPH. 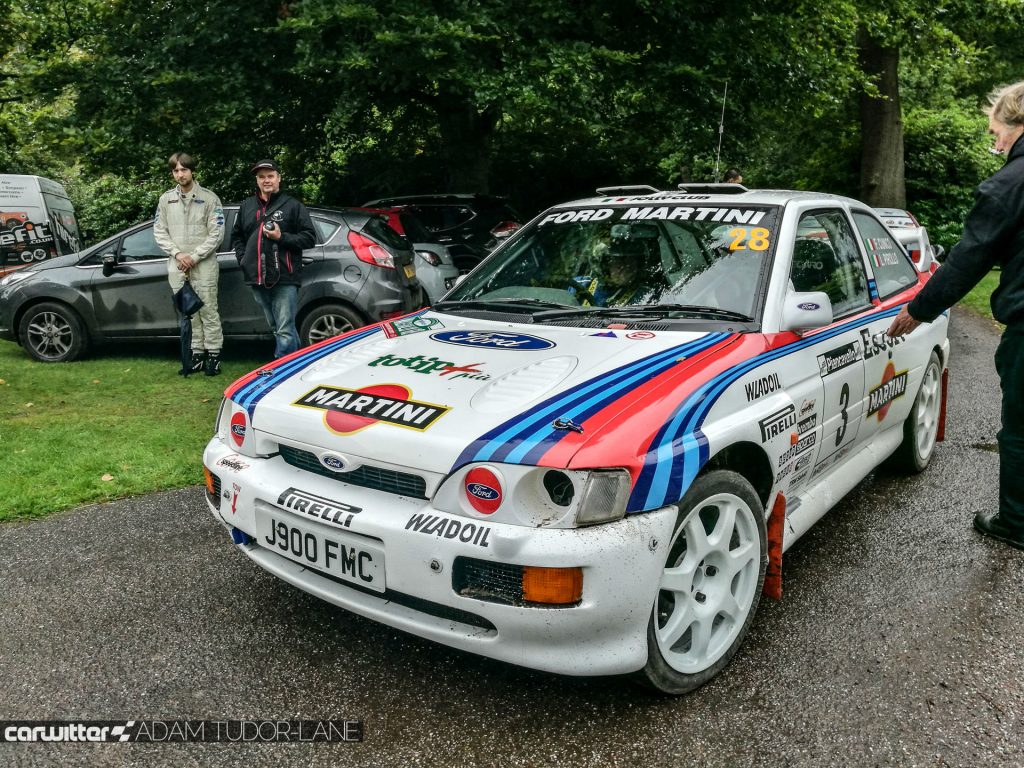 Naturally I waited for the Escort to pull in front. Clambering in you sit low down, eye line just peeping above the top of the dashboard.

Harnessed in, spine compressed downward it’s time to set off.

The course is roughly 1.5 miles long, with a hairpin and a doughnut section to navigate. The weather is damp, there’s been a little rain over the last hour and the surfaces look treacherous. 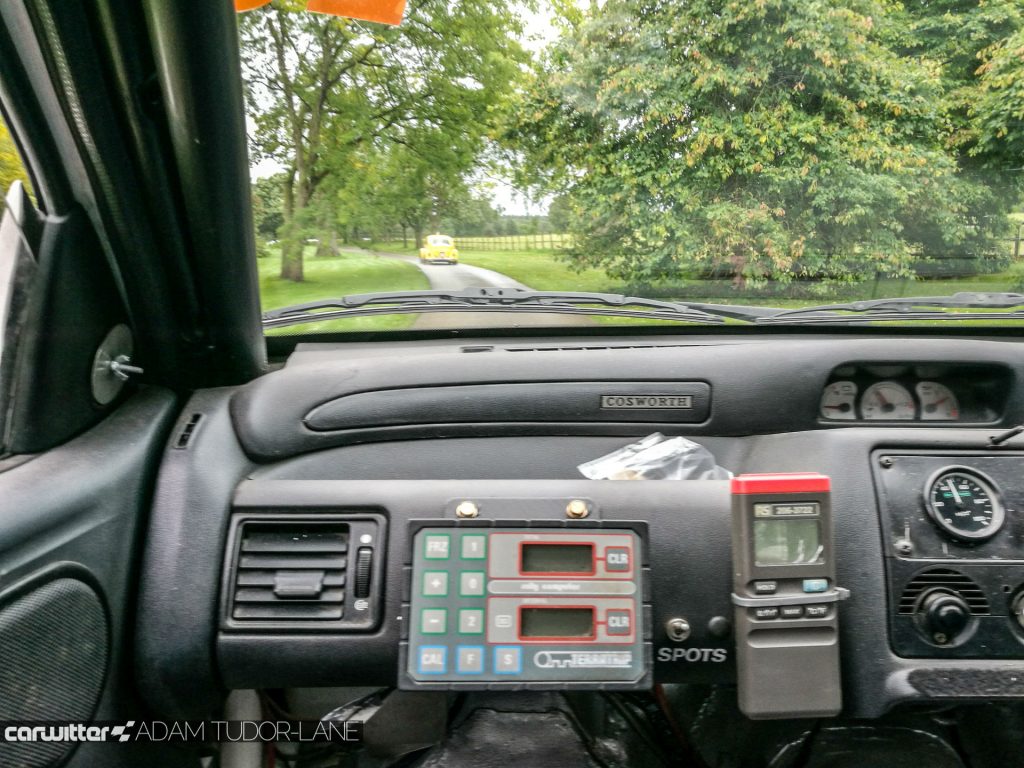 Waiting at the line we see the car in front shoot off. Held for 30 seconds or so it’s then our turn.

Engine revs rise, brakes release and it’s a go. The four wheel drive gives traction even on the glass like tarmac beneath.

Original power in the Escort RS is roughly 227 BHP, meagre by today’s standards but in this stripped out shell in felt more than enough.

Banging through the gearbox we make it past the first two corners. It’s a good pace, not breakneck, but not tiptoeing either.

Missing out the doughnut section we blast straight for the finish, over a slight crest were everything gets a bit light and you feel like you’ve left your stomach behind on the asphalt.

That’s it. The whole thing is over in about a minute, and now we queue back up for my exit and the next punter.

Here’s how it looked from my seat, full 360 and immersive. It’s filmed in 4k and best viewed on your phone.

Chatting with the owner he tells me how he used to be a co-driver for years in national rallies. He then realised that the guy in the seat next to him was having way more fun.

So 18 months ago he bought the Cossie. It was one of the very first out of the factory, before the homologation specials were really put into production. The roll cage and everything was factory fit, it had a lot of history and had always been at home churning through mud and undergrowth.

I unclip my five point harness, shake hands and extract myself from the bijou seat.

Hans device off, helmet off, balaclava off I then realise familiar faces queuing up again. 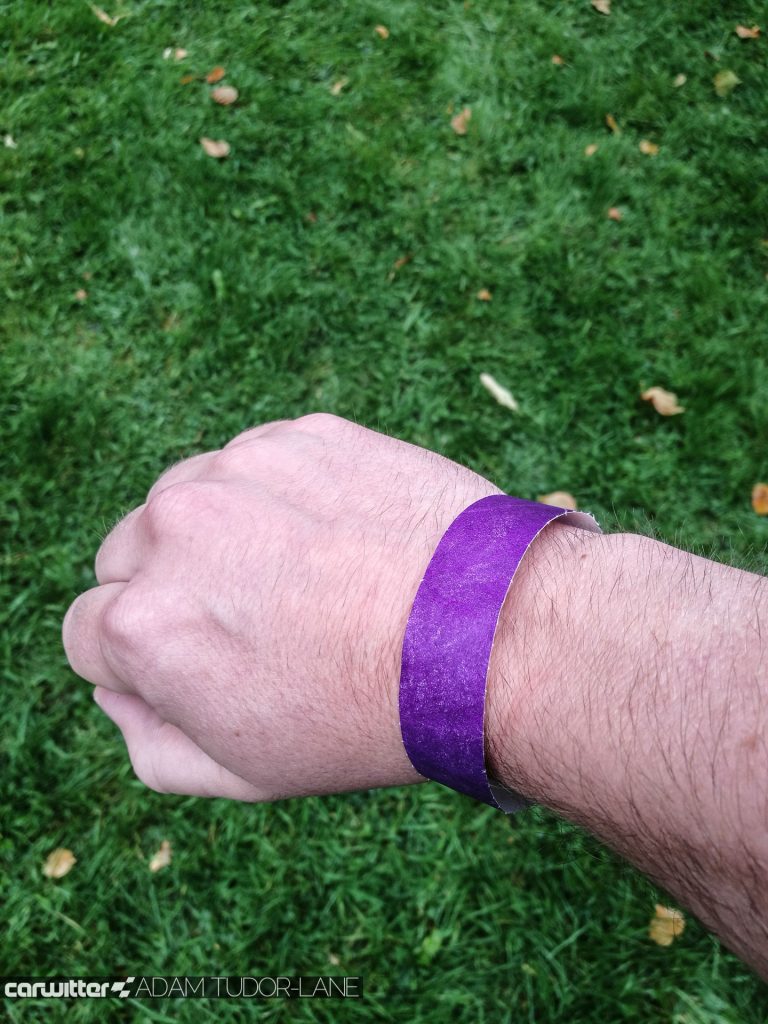 Apparently you just need to get another wristband and then you can go out again.

As soon as I know it i’m donning a Hans again, helmetting again and standing waiting for my next ride.

This time it’s a Toyota Celica GT4, the ST205 variant. Another homologation special, this one was a road car that had been turned into a rally variant.

Almost falling into the car over the high sided cage, limited visibility and minimal head turning…I was far from graceful.

This one was different to the Escort. There was only the top half of the dash present, the rest had been chopped away rather abrutply. Fuses were fixed to the dash, wires ran everywhere and there was even a small bare circuit board mounted near the dials on the drivers side. 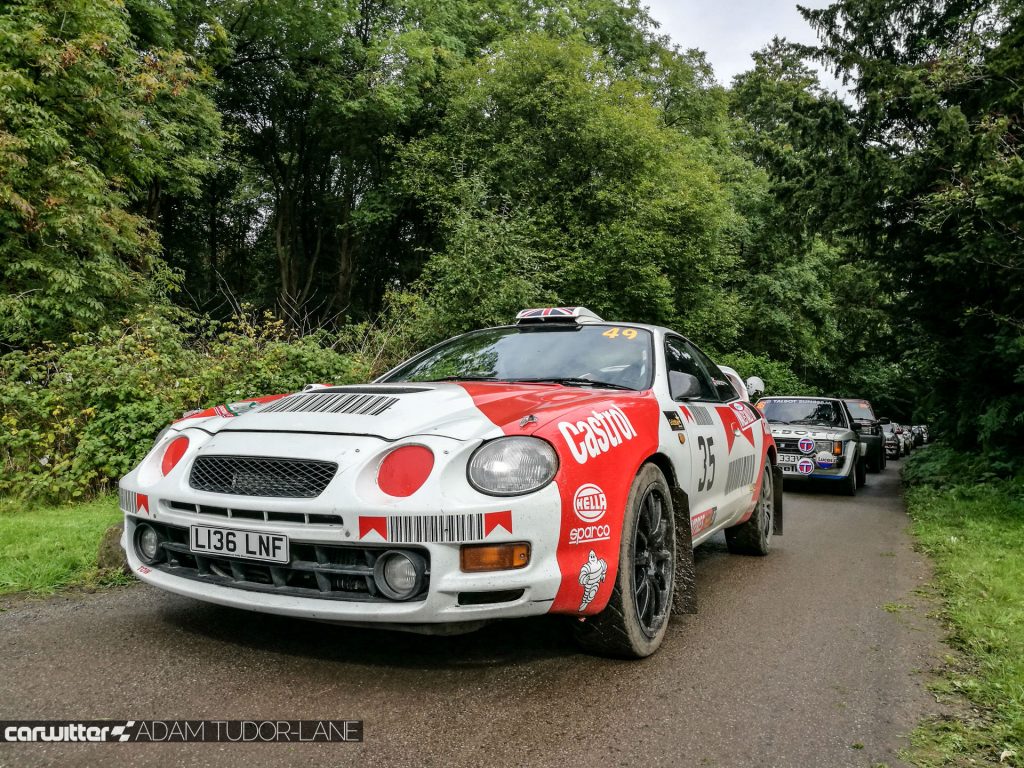 Setting off from the start the pace was far quicker. Even though we were on dry road tyres we shot toward the first corner. Diving in, a bit of opposite lock was needed. A full four wheel drift was being set in motion.

Next corner and we handbrake turn, this time the opposite lock couldn’t save us. But we stopped about 90 degrees perpendicular to the road.

Setting off again in a flurry of mud and grass we head toward the doughnut, slipping and sliding in a circle we make it with two wheels off and the Toyota scrabbling for grip.

Over the crest, stomach on the floor and we brake for the end of the course.

Queuing up this time took forever, there was some sort of massive backlog. Most of the passengers ended up getting out and walking a good 15 mins through the tree lined road back to base.

I sat and chatted instead. 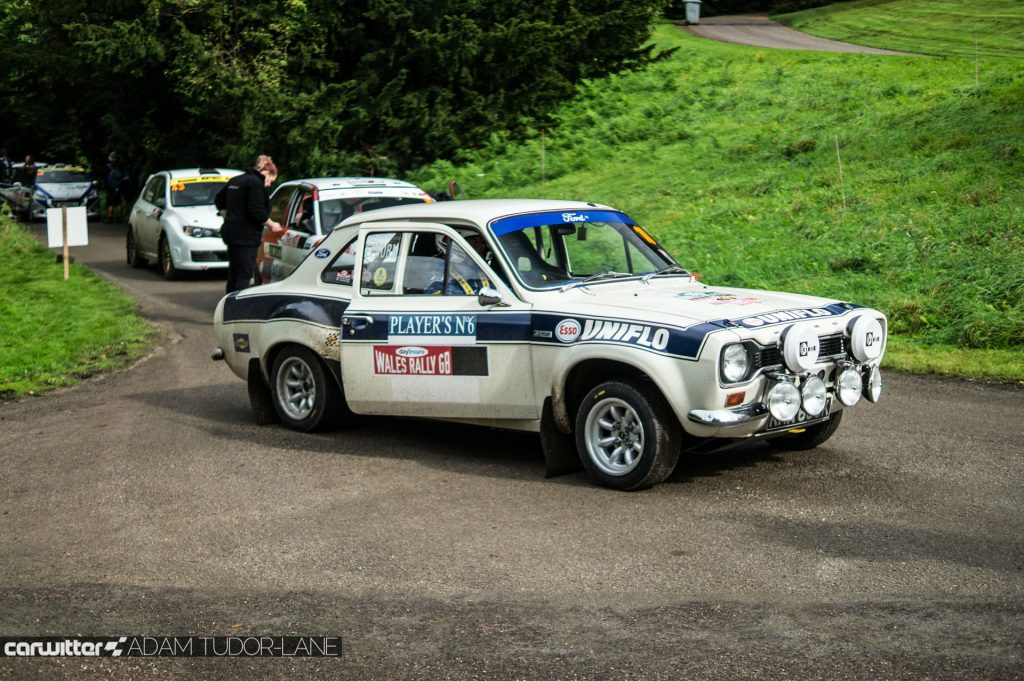 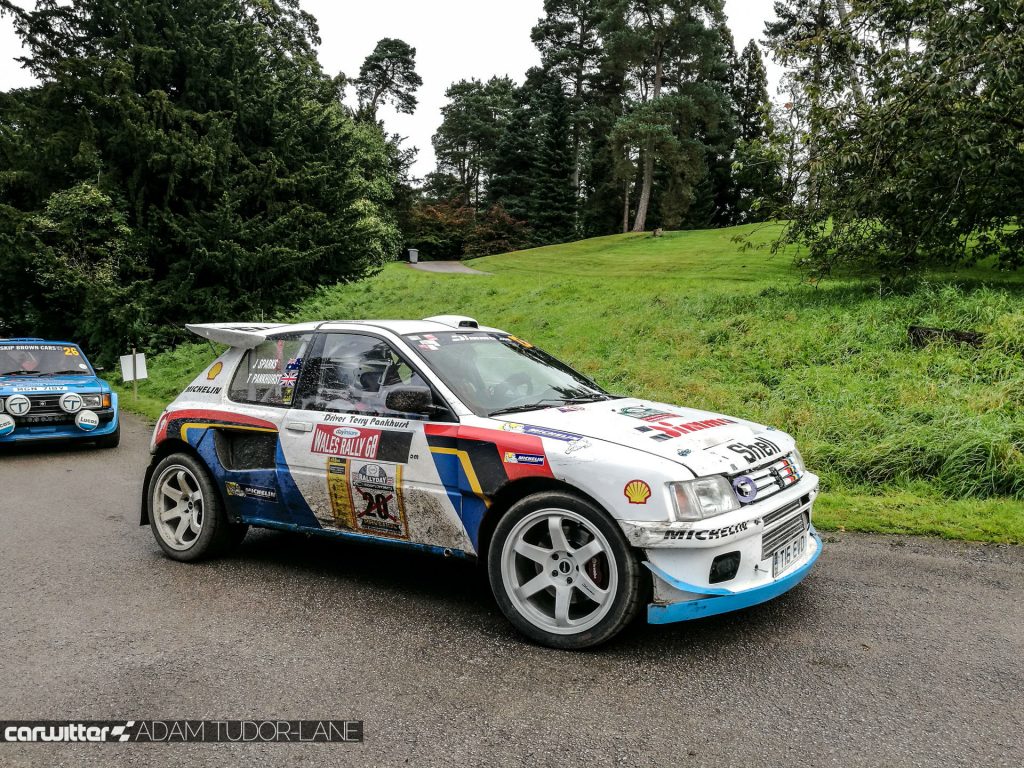 The car was a normal road going car once upon a time. It’s been outfitted with a custom cage, fire suppression system and the small circuit board is from Maplin. It’s a timer that controls the water injection onto the intercooler. It’s a must have for the Barbados rally and gives far more power when in use.

I find out the owner dislikes events like this. Cold tires, told by the organisers to keep it on the black stuff, it’s too short and too tame. But he does it to get people into a rally car and show them what it’s like.

All the guys that are here today have the same kindheartedness about them. The owner of the Escort likes to do it for the same reasons. He also gets to use his car for free, in a relatively safe environment and doesn’t have to go too mad. 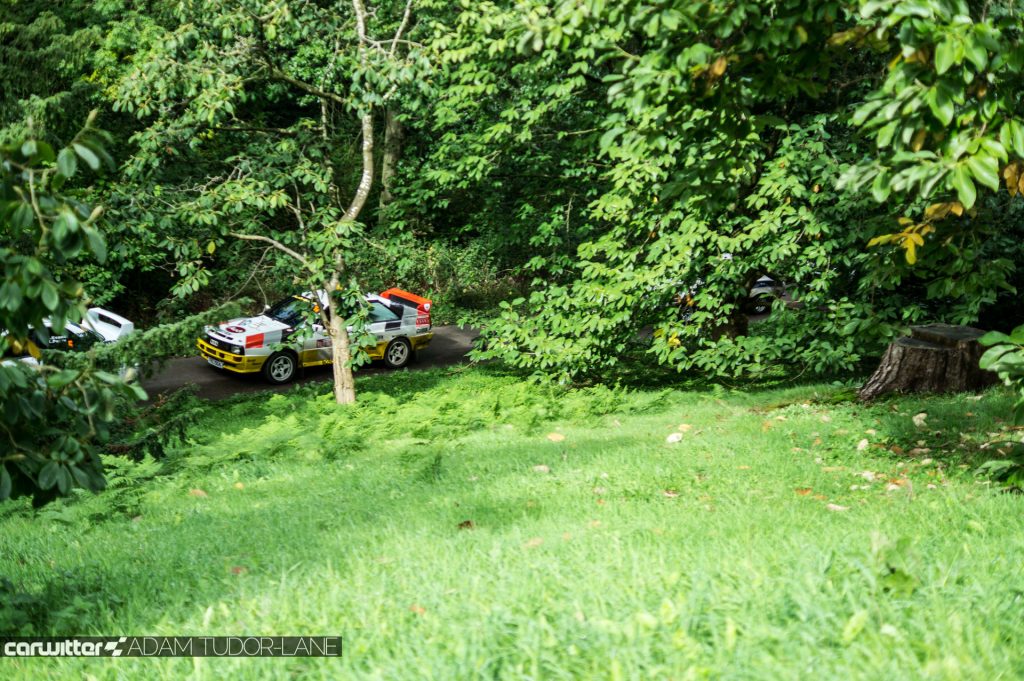 But with only two runs each I can’t help but feel it’s probably been a long journey, and not much action for these guys.

All of them would have loved to have done this all day long. Over a longer course, and with the correct tyres. Maybe even timed.

Naturally they have to keep all us media types with the correct number of limbs and heads. But it just seemed like such a waste to me.

They’d all bought their trailers, cars, fuel, Christ knows how many miles for two, maybe three runs around Cholmondeley.

I know a lot of the media peeps would have kept going round all day, seeing what the different cars were like and experiencing childhood dreams. 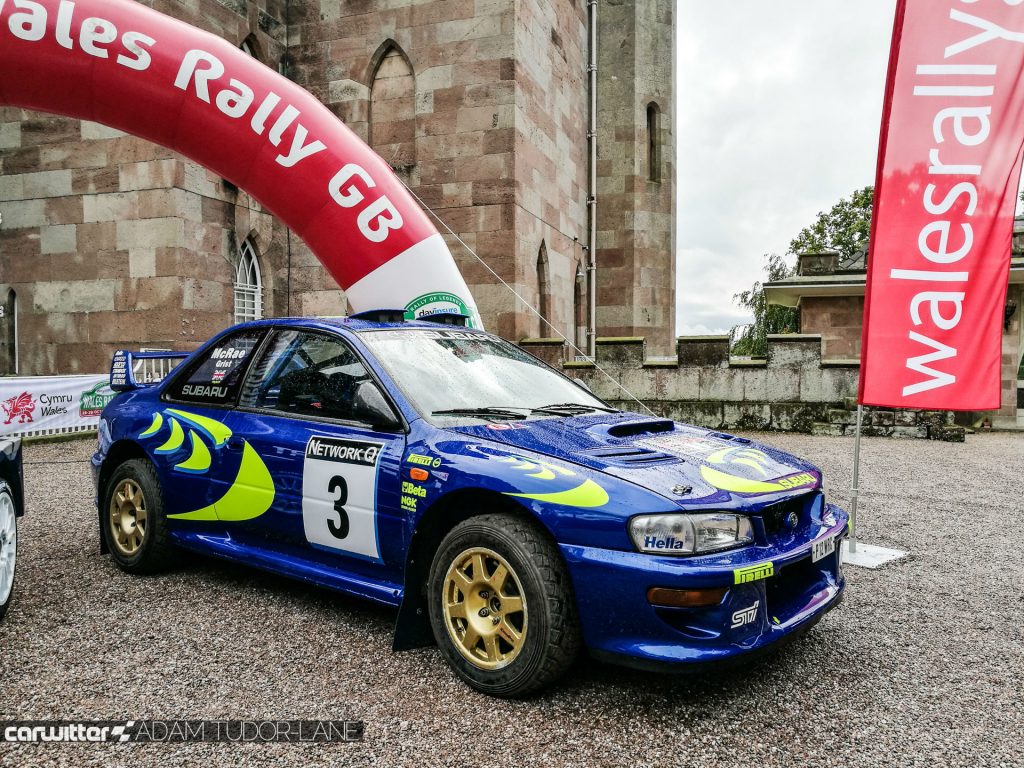 Whilst it’s a good event and does give you a very mild taste of rallying I can’t help but think it could have been organised far better and the opportunities been clearer.

Anyway, we’ll certainly be watching this years Wales Rally GB and keeping a beady eye on Chris Ingram. A rapidly rising British rally star, who confirmed at the media day that he will be running in this years Rally GB. 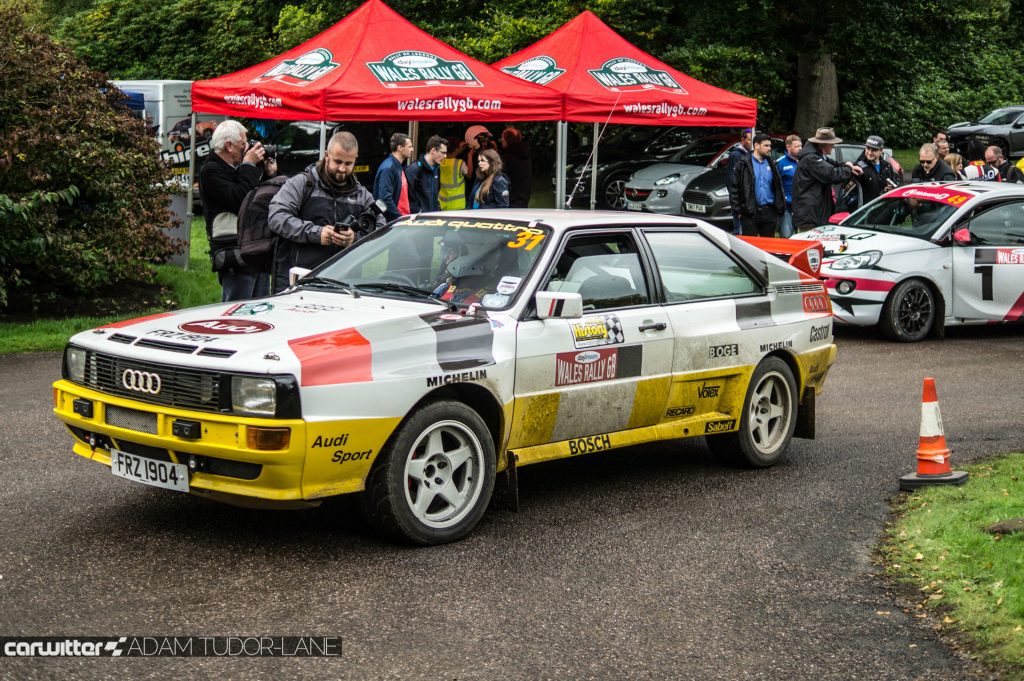 Challenging Weather: 7 Tips to Stay Alert on the Road