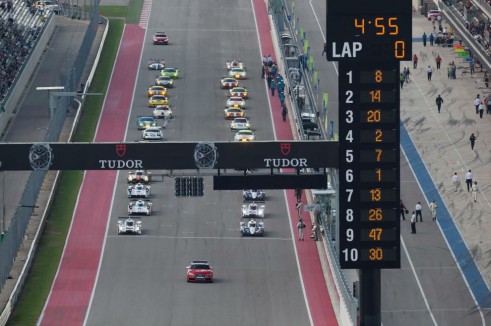 The World Endurance Championship returned after a 3 month hiatus to the Circuit of the Americas, Texas.

It brought with it a few new faces, most notably the LMP2 Extreme Speed Motorsports HPD ARX 03b Honda of Scott Shard, Ryan Dalziel and team manager Ed Brown making their debut ahead of a planned second outing at Shanghai before a rumoured full season in the WEC for 2015. In the LMP1-L class the championship witnessed the long awaited appearance of the Lotus AER machine.

In the LMP1-H category, Mike Conway joined the Toyota squad as regular pilot Nakajima was racing in the Japanese super Formula. 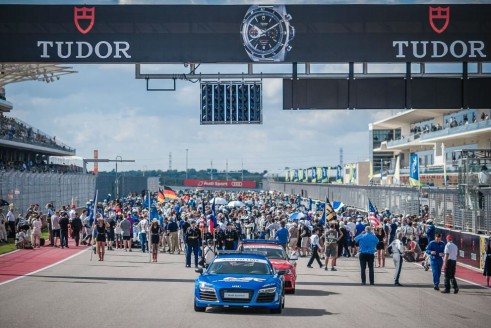 Qualifying saw Toyota take the pole with Buemi and Davidson over a second quicker than the pair of Porsches, the Le Mans winning trio were up 4th ahead of the second Toyota and the 2nd Audi in 6th. While in the “L” class the Lotus and the Prost/Heidfeld/Beche Rebellion would not set a time forcing both prototypes to the back of the pack.

Buemi raced away at the start building a 30+ second cushion before handing over To Nicolas Lapierre. 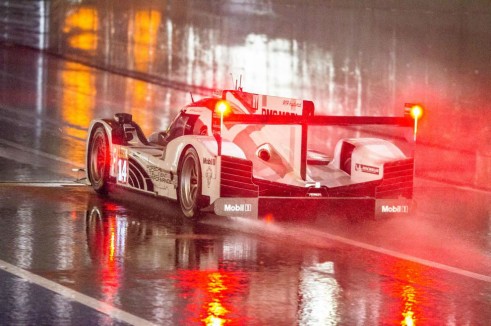 Then the rain came.

Well a monsoon of biblical proportions which caught a number of the drivers out, Lapierre included sending Prototype and GT machinery into the gravel one after another as drivers battled against the worsening conditions.

Timo Bernhard would make contact with a barrier without damaging the Porsche too much, it would have seemed while Mike Conway made a fantastic save in his Toyota.

Sensibly the race was halted for a little under an hour and the grid lined up in race order albeit on count back resulting in quite a lot of confusion as some of the recovering cars found themselves a lap down after pitting for suitable tyres. 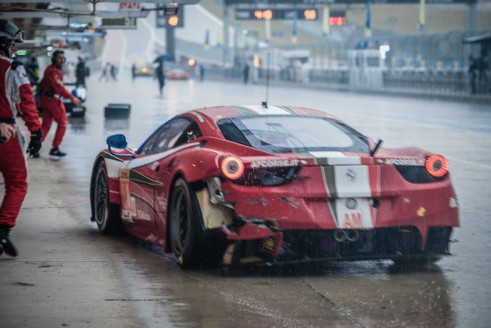 Following the restart it was all about Audi, the #2 machine of Fassler, Treluyer and Lotterer making the best of the conditions and the “ungrooved “ intermediate tyre while sister car of Kristensen, Di Grassi and Duval – who would appear to have no issues following his awful crash during the Le Mans practice – wore the conventional Michelins to score a second 1-2 in as many WEC events, after the Porsche of Jani, Leib and Dumas hit trouble late on promoting the recovering Toyota of Buemi, Lapierre and Davidson to third ahead of the two Stuttgart machines.

Wurz, Sarrazain and Conway would complete the Hybrid category, the former having a few things to say on social media after the event about the way the red flag and restart was handled!

In the LMP1-L class the qualifying problems of the Heidfeld/Prost/Beche car would all be forgotten as the trio took a pretty much unchallenged class victory following the retirement of the sister machine. The Lotus would end up 9 laps down on the Rebellion. 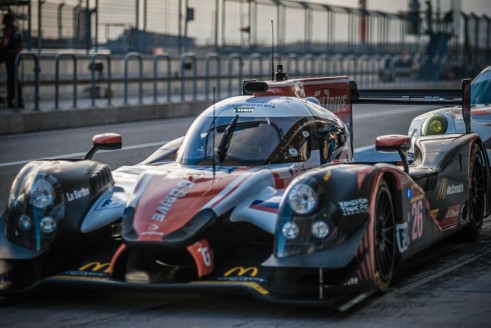 In P2, after an up and down race again following the red flag confusions the KCMG took the spoils in their Oreca Nissan ahead of the similar Russian SMP outfit and the ESM HPD Honda.

It should have been an all Oreca Nissan podium but the second SMP entry retired while heading the class with mechanical issues, while the Hong Kong based KCMG squad battled past the remaining Russian entry to take slender class honours.

In the GT classes, as ever there was battling to the last. The Aston Martin of Turner and Mucke taking the victory in Pro class from the Porsche of Pilet and Makowiecki and the Ferrari of Villander and Bruni after all three protagonists had lead at one point or another.

The main battle however would go down right at the last in GT Am category as Richie Stanaway closed down Pedro Lamy – both again in Aston Martins from 2 and a half to less than a second on the final two laps. 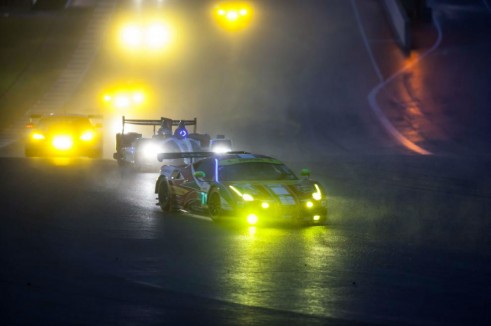 Practical Sleepers in the United States