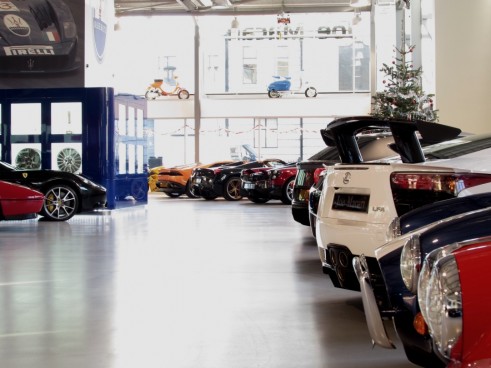 The exotic automobile dealership is not always the most welcoming place for the keen eyed eager young car enthusiast to go and indulge his or her passion.

In spite of the infantile grasp and appeal that precious metal and composite has over its fans, those whose job it is to distribute it, have, in my experience, often been very sour when dealing with anyone not laying down a deposit.

We are all in agreement that these things are not climbing frames or in fact there for anyone else’s viewing pleasure at all. They are a product that is there to be sold.

They are also, however, a luxury item that garners the attention of people of all ages and lets face it, the future of the market does depend on such machines, or at least the brands that are responsible for them, being one of the goals that the young and ambitious want to achieve.

Ask any forty-something Ferrari owner now, and he’ll tell you that having the toys and watching them race fostered his dream, and that seeing one in the flesh concreted that dream.

So the sale of expensive cars is a fine balancing act between having your product presentable for sale to the customers of today, whilst stimulating and encouraging the imaginations, desires and aspirations of the customers of tomorrow.

This is why I think Joe Macari Performance Cars is one of, if not the best distributor of rare machinery of its kind.

Before my visit I knew little about how they did business. Whether it was a call up to book job. Whether the public were allowed in under any circumstance at all.

In spite of my rant just gone, given the kind of cars on display in that place and the price attached to it, id’ve completely understood if it were for punters eyes only. 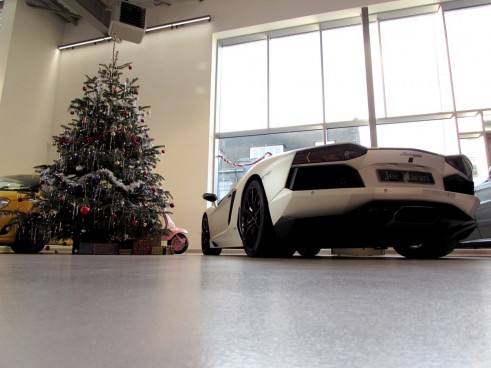 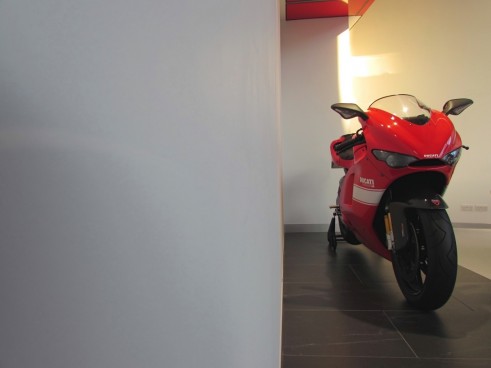 It was a purely recreational visit at the time, for my mates little brothers birthday.

On the morning of  our visit I made an uneasy call to check whether it was open to visitors.

I’m calling to enquire about visiting your dealership

with further explanation of the circumstances of the visit, to which I received the response,

Success; a pleasant surprise, but my faith remained reserved. Could these lot be, god forbid, pleasant? Even if we don’t have a loaded chequebook? This was the point where I thought there might be something worth talking about.

Upon passing the newly revamped premises I found myself (and my mates) panting at the window of the South Ken’ to Wimbledon replacement bus.

A bit pathetic given some of the events I’ve been to this past year and the machinery i’ve been lucky enough to behold, but old habits die hard.

In view, even from a passing coach, was a Pagani Huayra, Lamborghini Huracan, and one of the first Ferrari 458 Speciale A’s in the country. Buzz yourself in, and these are what greet you. The air is dusted with petrol fumes and the scent of well tended leather.

Behind the desk, itself obscured by a black road legal Maserati MC12 Corsa, was the girl with whom i’d spoken on the phone not an hour before. 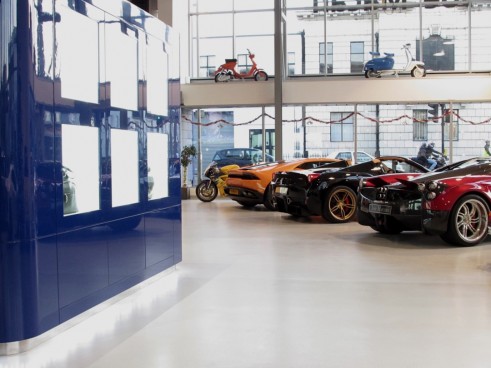 First order of business after gathering oneself together, remaining adult and dignified, is to scope the joint out.

We’re here to see the best of the best. What you got, Macari?

Good gravy were we in for a treat. On top of the four machines i’ve already mentioned, in this room, sat the Nurburgring all time lap record holding Porsche 956, one of 50 Lexus LFA Nurburgring Editions ever manufactured, a pristine Lancia Delta S4, an AC Cobra, a Jaguar XJ220, a Ferrari 288 GTO, a Series 1 E-Type, a Ferrari F40 and thats just off the top of my head.

The plethora of images that should be posted with this article may reveal the blasphemy of my amnesia, but even without naming the rest, its quite a roster. 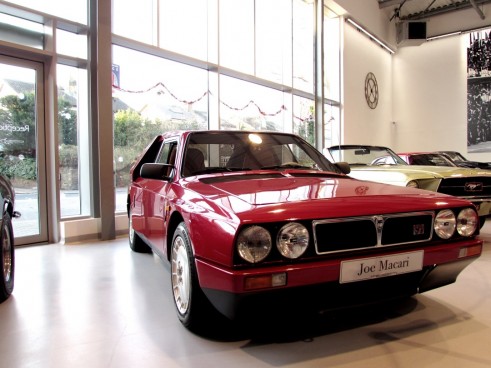 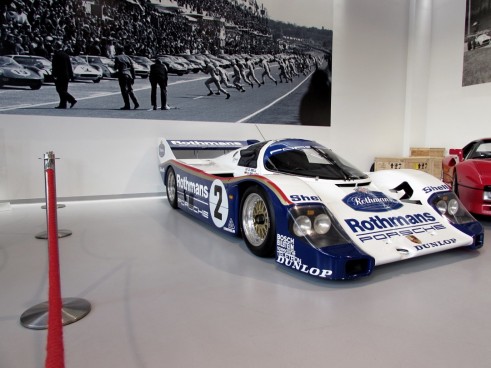 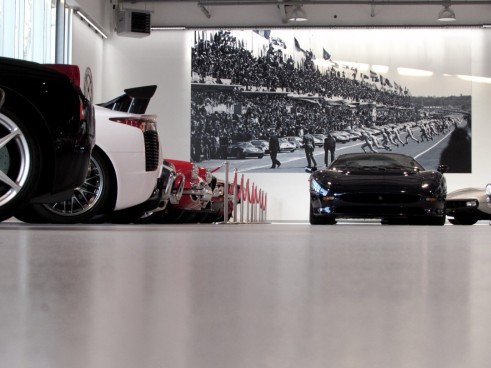 Following our little reccy the birthday boy immediately swarms to the LFA, a car that has until now, quite comedically eluded him.

I’ve seen a few at various events large, small, near and far. I actually stumbled upon the blue press fleet car shaking down at Snetterton (our local track) one year.

Finally however, here it was and he was suitably and embarrassingly sweaty in the presence of his dream car. I remember as much with my first (second, third and fourth) Zonda S at Wilton House. 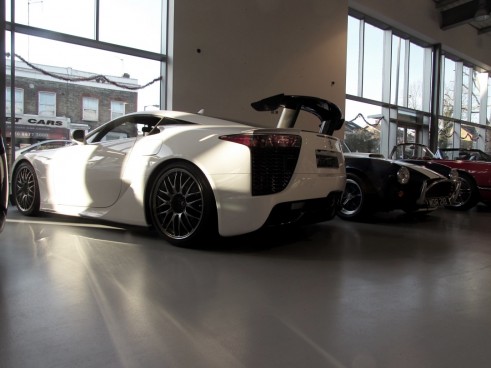 We get very close to a lot of these priceless unicorns, hanging our cameras in the cabins, poking fingers in sooty exhausts (ahem), all that silly stuff, whilst being extremely and demonstrably mindful and careful of them.

This kind of liberalism on the part of the establishment is both risky, I admit, for them, but nonetheless boundlessly refreshing. Too many times have I been to unnamed not quite exotic brands sales outposts and been ushered away from R8s.

Smashing the eery silence of this barracks of the bellissimo, is a louder than life, out of time throbbing from Kimber road. We bound, ahem, casually walk outside to see whats causing the stir. 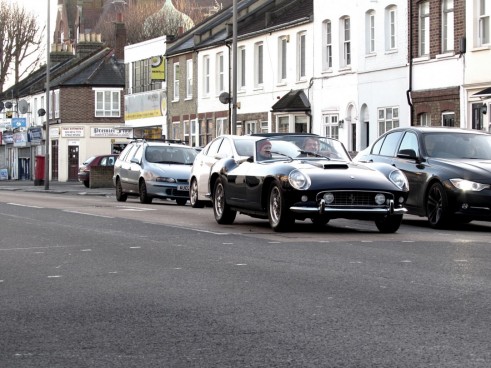 Its a closed light Ferrari 250 GT California with none other than Mr Macari himself at the wheel. He spares no expense with his application of throttle turning left leading down to the service centre. Trouser tents suitably topped up, we limp back inside. 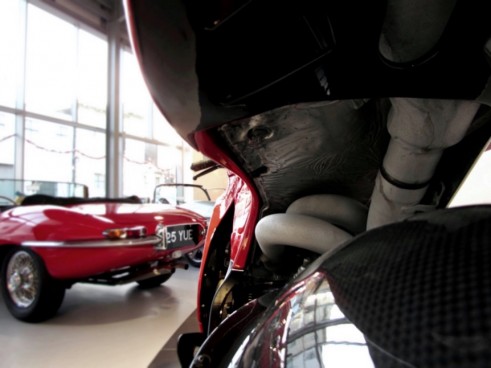 Other than the pretty, well spoken lady behind the desk, one other employee strolled the expanse of the Macari showroom space.

We spoke at length about cars and what his passions were. He claimed to own no less than 5 classic Allards; a little known, but briefly successful in racing British manufacturer who shut up shop in 1966. Our informative friendly new acquaintance may or may not have very generously allowed our LFA besotted guest to have a brief seat in the car of his dreams. Exemplary treatment, if a little risky; that is if he did allow it. I don’t know…

Following that possible experience we resigned to further snapping. You can lose hours in places like this, especially if you’re made to feel welcome.

Now to the second half of our Macari experience.

I promise account of this won’t take up another thousand words. Having exhausted all photographic opportunity in the showroom, our new friend directed us to the aforementioned service area. We dabbled with the idea of going or just hitting the city centre. Im glad we went.

Follow the road down which the 250 GT did splutter into there is what appears to be an industrial unit. A Macari branded depot indicates we have the right road but Mercedes Vianos are what captivates our narrow view ahead… oh its opened out. 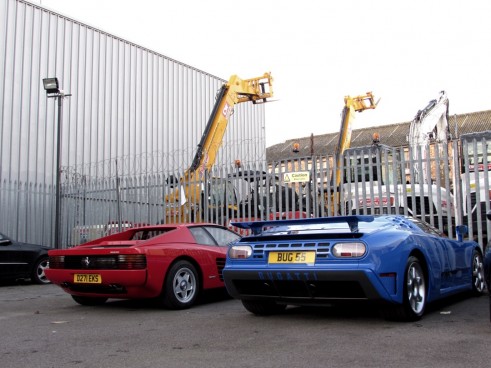 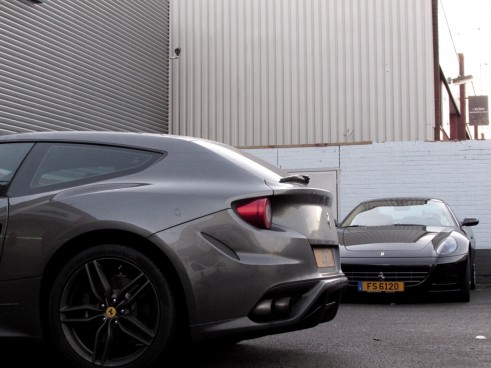 The sky is clear on this crisp late December evening, and the light is fading. We have to move fast to get the shots we want.

We immediately vacillate over the Bugatti and the LaFerrari. Neither can be qualifiedly described as beautiful, yet they relentlessly captivate the gaze of all who behold them.

They wear such typically garish and intimidating proportions that are so synonymous with the ostentatious hypercar. The EB looks squat and muscular; vacuumed to the ground. 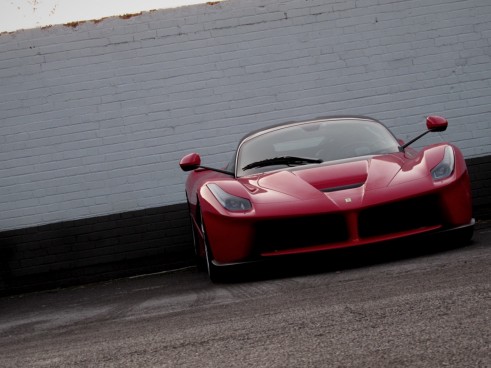 The LF is an exercise in automotive design illusion. That skinny bubble roof works with its gopping mouth, spindle mounted mirrors and lights that straddle its outer reaches to give a presence and stance that I simply haven’t seen on another car.

It takes more of my mental faculty to assess its proportions and digest its posture than it does to pass judgement on something else you might call typically beautiful. Its awe inspiring and visually overpowering.

Don’t take this as me fangirling; I’d take a 918 over this every day, but LaFerrari is some piece of work. To see one in this more casual setting too, gave new value to its presence.

It took up some time getting around and debating, but we weren’t there for, nor am I here to write about The Ferrari TheFerrari, so we proceeded into the service building.

If Ferrari were royalty, then we’d just rocked up for Christmas dinner at Sandringham.

To our left, Joe was leaning over a 275 that was undergoing some TLC. We made our presence known and humbly asked if we were alright to mooch.

Go right ahead just don’t get caught in any equipment

Mooch we did. It was good to be back in an area bathed in artificial light. Time was no longer of the essence. That is until everyone wanted to clock off for the day. 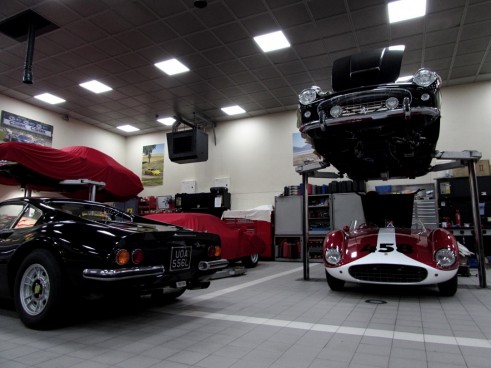 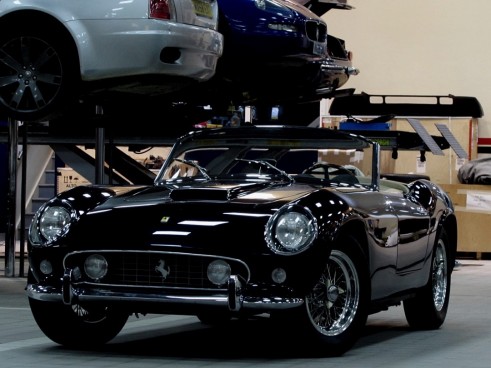 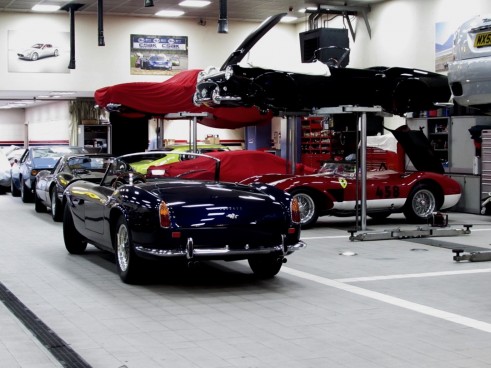 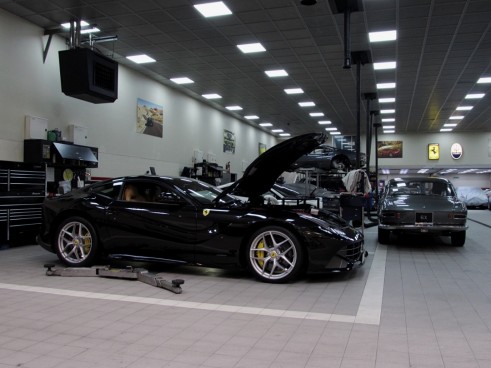 The scent of 98 octane was even thicker in the air in here as carborettas gargled on the gasoline and belched its volatile remnants out of slender quad chromed outlets. The extractor tubes hung over the 275s exhausts were clearly struggling.

We strolled around in a daze, either high off the fumes or besotted by the priceless automotive gems that littered this hall of bygone heroes. I suspect it was a bit of both.

When not scoping out the next best shot, we were gushing about how special a moment this was to undoubtedly be remembered as.

Having signed off a 330 for a quick test run, we spy Joe strolling over to us. “Alright chaps?”. “Aye, aye, just admiring your collection”. “A lot of its not mine. We’re looking after customers cars here as well as buying and restoring. That TestaRossa came in recently. Very special car. Mille Miglia. Cuban Grand Prix. Priceless”.

We nod and acknowledge, somewhat slack jawed. “Whats your favourite?”. I ponder a moment… “I love the 275 GTS. Subtle and beautiful. A real cruiser”.

Macari nods in agreement; “lovely cars the 275s”. He seemed surprised, pleasantly so, that we had such appreciation for machinery that came so long before our time. The 330 trundles back in; petroleum ethers trailing into invisibility as it rejoins the warm nest from the dry crispy cold. “I’ll leave you boys to it then”. 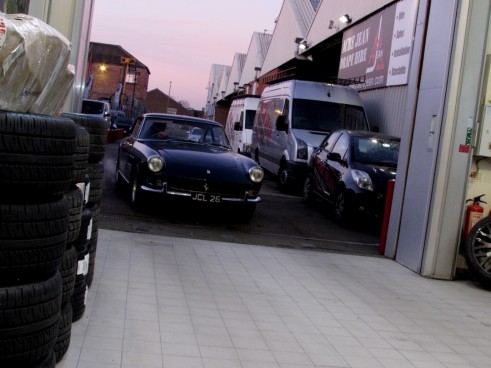 We gave our thanks and wandered off again. Outside the light was trailing. We knew the time had disappeared from under us and that the JMPC crew would be looking to get on their way.

We stroll outside; greeted by LaFerrari and friends shaded by the compounds walls with the wintery twilight glowing in the sky overhead. It was, regrettably, time to leave. 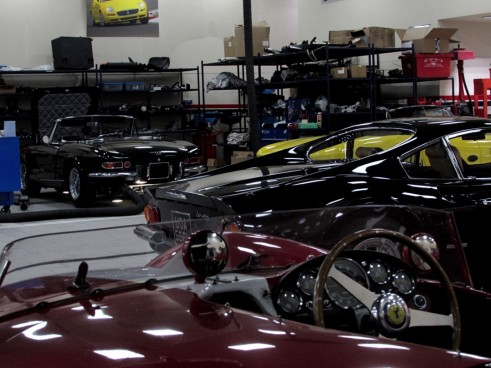 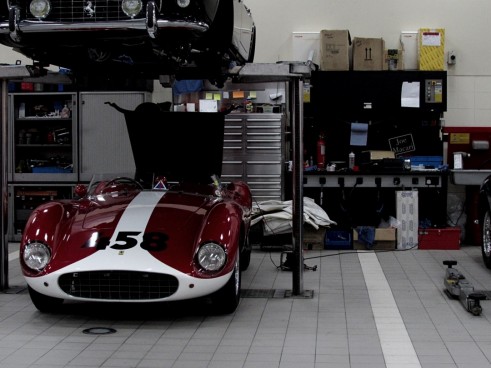 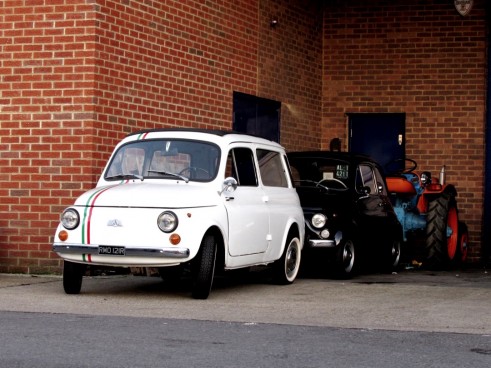 The job description is stock, sell and service exotic cars, but it goes so far beyond that. It plays the perfect automotive host; for rich or poor, young or old.

It presents a supercar in front of the public, for the spectacle that a supercar is. It is a prerequisite of this type of machine, to garner the attention and adoration of all onlookers.

So just as it seems non sensical for someone to buy something like a Carrera GT and be left alone as if they were trundling around in a Focus, a dealership full of the things isn’t going to go unnoticed.

So Macari helps foster the love. Its this kind of front line of exotic automotive exposure thats going to keep the order books of Ferrari, Lamborghini, Pagani and the like, full, for years and years to come.

Aspire to succeed. Aspire to own one of these. What a pleasant surprise and a truly lovely experience it was. 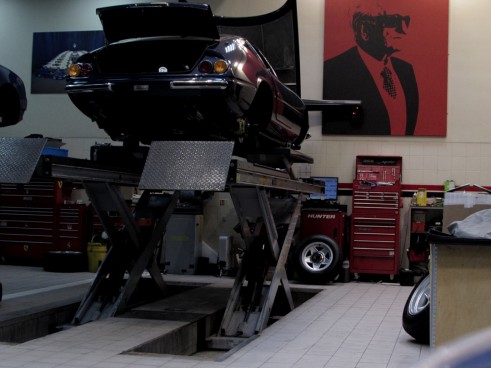