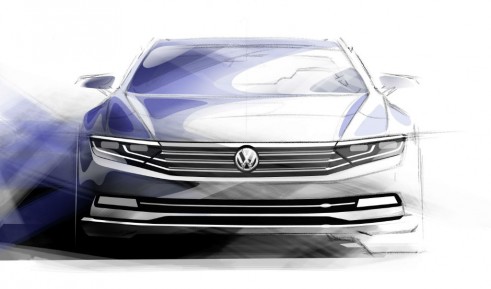 The VW Passat is now 41, and the current version was last facelifted four years ago, so it’s about time they updated it’s long-running saloon.

And they have, because here for the first time are some scant details of what to expect from the new version, due out early next year.

The car will make its full debut at Paris in October, but for now Volkswagen have given us some concept sketches and details of what will be under the bonnet.

The sketches show a much sleeker version of the venerable saloon, perhaps taking cues from the success of the Passat CC that joined the line up during the life of the current fifth generation’s life.

VW say the new car will be 85 kg liter than the outgoing model thanks to the use of lighter materials in construction meaning a saving of up to 20% in fuel efficiency.

Under the bonnet the engine range will be joined by a new, biturbo 2.0 litre petrol unit producing 236 bhp and an impressive 368 lb ft of torque.

That pushing power will be routed through a seven-speed double clutch ‘box and four wheel drive.

Alongside that, the first Passat hybrid will be offered, in the form of a plug-in model with a range of around 600 miles on one tank of gasoline and 31 miles on electric power alone.

Inside the Passat will follow the trend for screens, with a 12 inch touchscreen sliding into place along with a raft of other new features including Park Assist for auto parking and Traffic Assist, which is a system VW say will make start/stop use more comfortable.

Expect more details of the new Passat closer to the launch, and you can follow them all on Carwitter.