It’s another Saturday morning here in Irvine, California. Cars and Coffee is held in the same parking lot as the Mazda Headquarters. Employee cars are left in the parking lot. Lately, they have consisted of Mazda 6’s and Mazda CX-5’s.

It wasn’t that long ago when the parking lot was filled with Mazdaspeed 6’s and Mazda RX-8’s.  The enthusiast employees matured a bit.

When the first generation Mazda MX-5 first came out, I was not impressed.  I was an adolescent focused on Ferrari, and back then, the 1991 Toyota MR2 looked the closest to one.

Throughout the years, I’ve grown to like the MX-5.  Sure, every later generation got a bit heavier, but I can appreciate Mazda attempts to open up to a broader market.  The third generation is still under 2,800lbs., even with a power hardtop. That’s a feat in itself.

The 2016 version resembles the first generation all over again, with sharper lines.  Mazda wanted to focus on dropping weight.  Simple, compact design allowed that to happen.  The difference this time lies in the arches, where the striking arcs are eerily similar to a Ferrari 458. 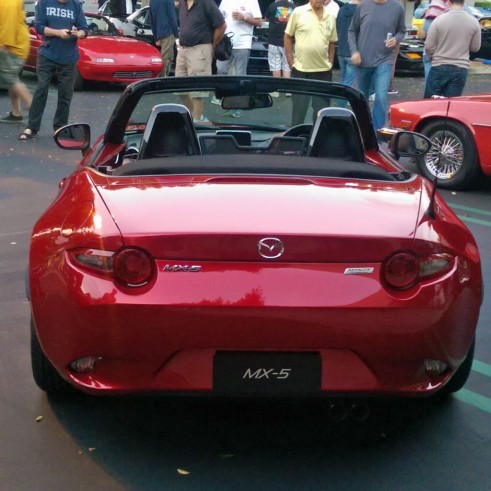 What impressed me most was the interior.

The speedometer and tachometer have 270* sweeping needles, very similar to the Ferrari 360.  The HVAC unit consists of three rotating knobs.  There was no indication of a radio, but that seems to be taken care of by the multimedia screen. 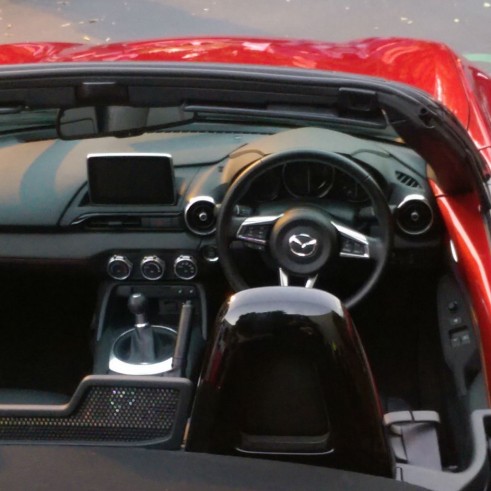 The exterior is simple, yet striking.  Lightweight, clean designs, and a back-to-basics driving experience led to the Mazda MX-5’s success.

It’s easy to see that success continue on with the latest generation.