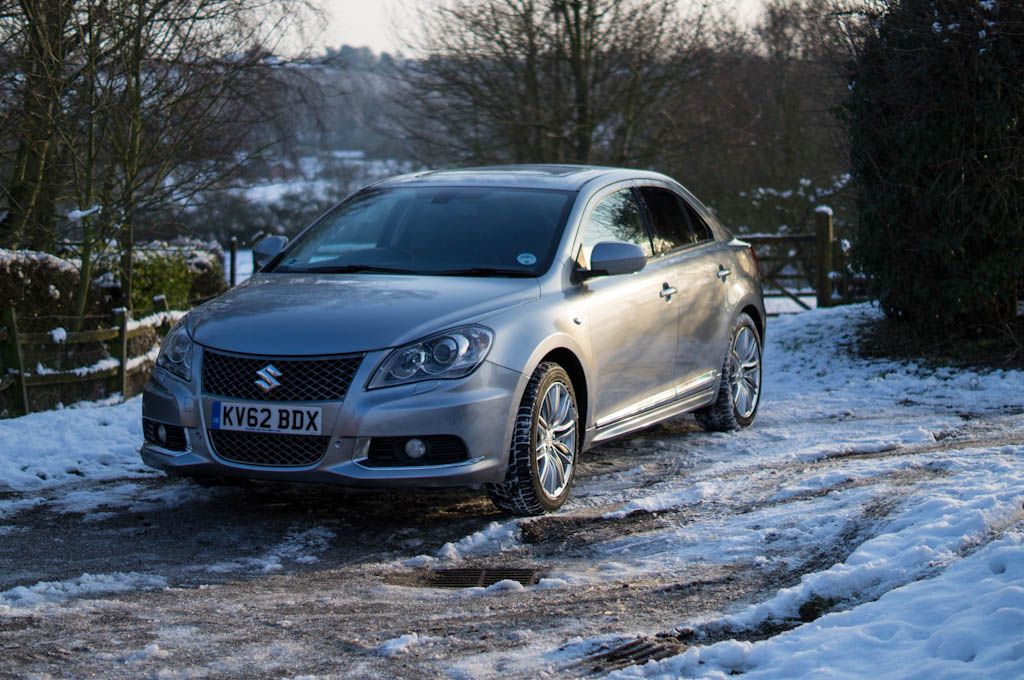 With only 500 models of the Suzuki Kizashi being made available to the UK public, it will always be a niche, rare car. Kizashi is a toe dip for Suzuki, to see how well the model floats in such a tight market. The car we reviewed, came in the only spec available, all-wheel drive, 2.4 Litre Petrol, mated with a CVT automatic gearbox. At £21,995 it sits in the middle ground, between budget and premium when compared to its rivals. 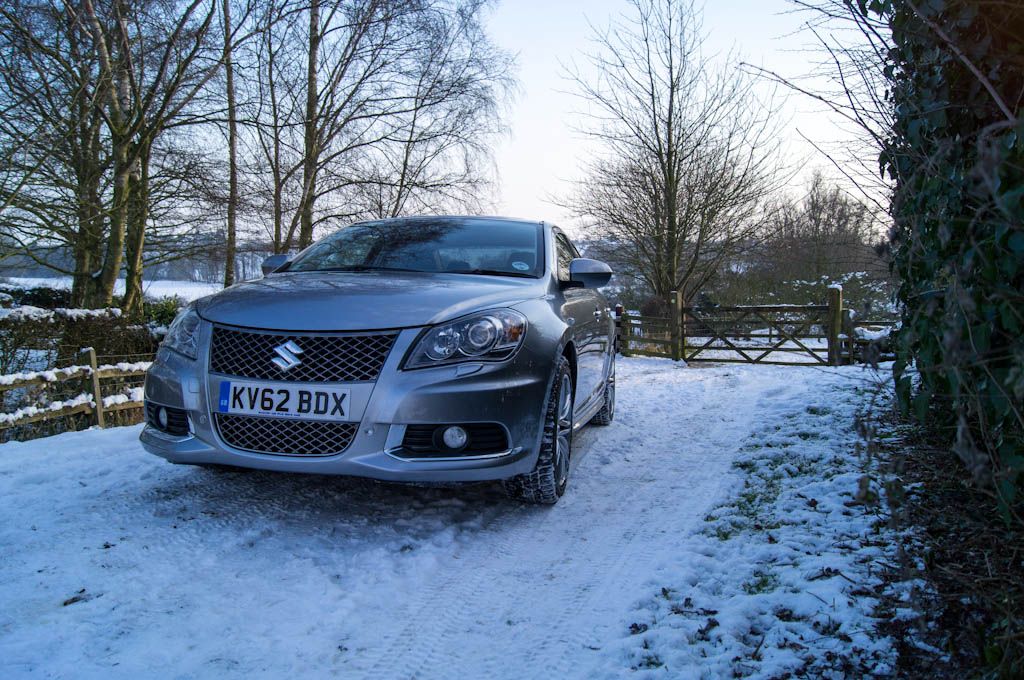 Kizashi in Japanese means “something great is coming”, this car certainly looks great. Chunky, wide, with subtle curves and bulges. From some angles it looks like a Volvo, from others it’s unmistakably Japanese. The front of the car follows the same look as its baby brother, the Swift, with a deep diamond front grille punctured by a prominent S. Dark headlights frame the HID lamps nicely, as the line from the front grille flows up the bonnet and down each side of the car, giving it a Volvoesque waste line.

At the back the boot lid features an upward kick, with a small rear spoiler on top. Toward the bottom, the twin exhaust pipes are surrounded by floating aluminium inserts, which give the illusion of wider pipes, it helps the rear end look purposeful and mean. 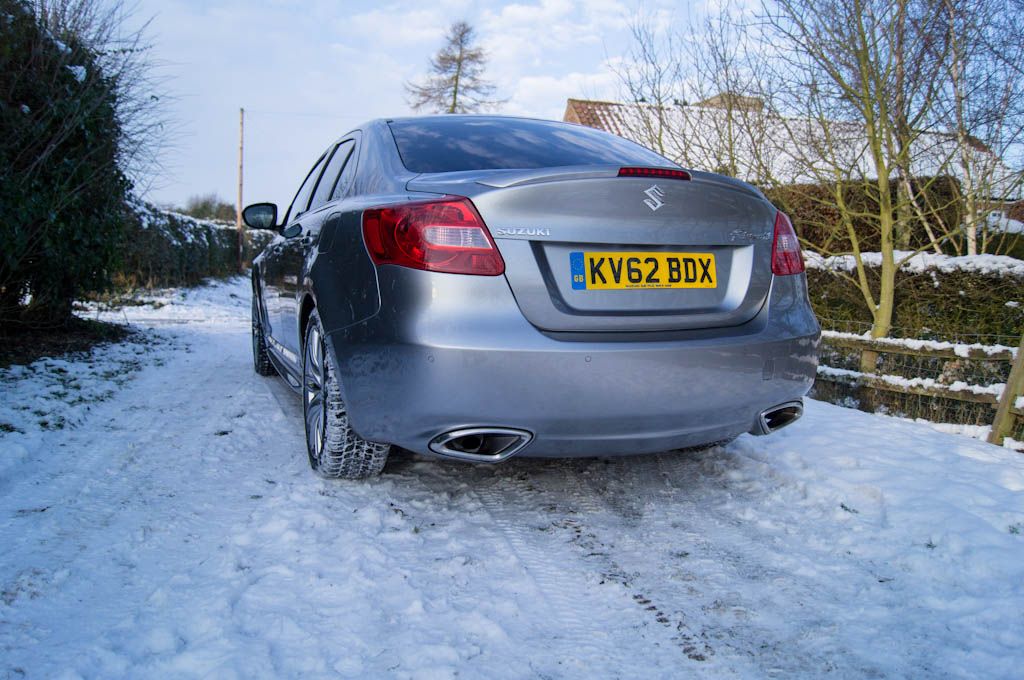 Being one of the smallest in its class in terms of dimensions, at only 4,650mm long, it is shorter than the Mondeo and Passat. Due to this the rear doors have a slightly small entrance, making them a little tricky for an adult to get out of, but for kids, or occasional use they are perfectly fine. 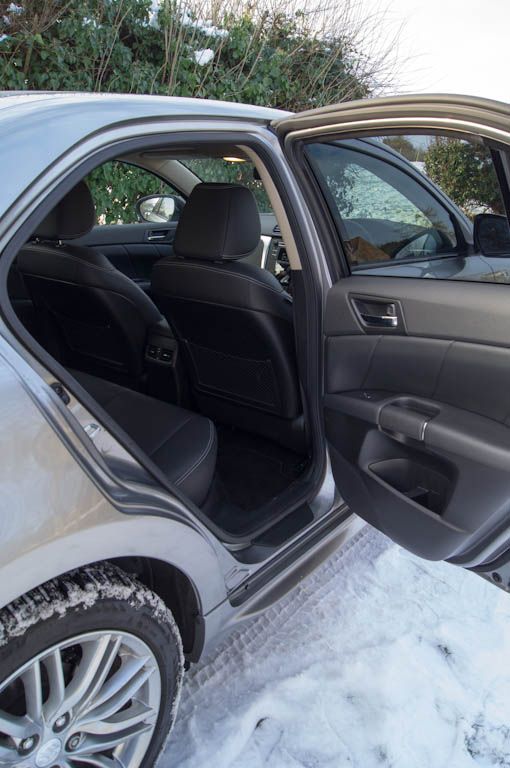 The only thing we didn’t like about the exterior where the darkened rear passenger windows. I’m not sure why manufacturers have gone down this route in the last few years, but I think it looks plain odd, especially on a saloon. It would be nice if this was an optional extra instead of standard. 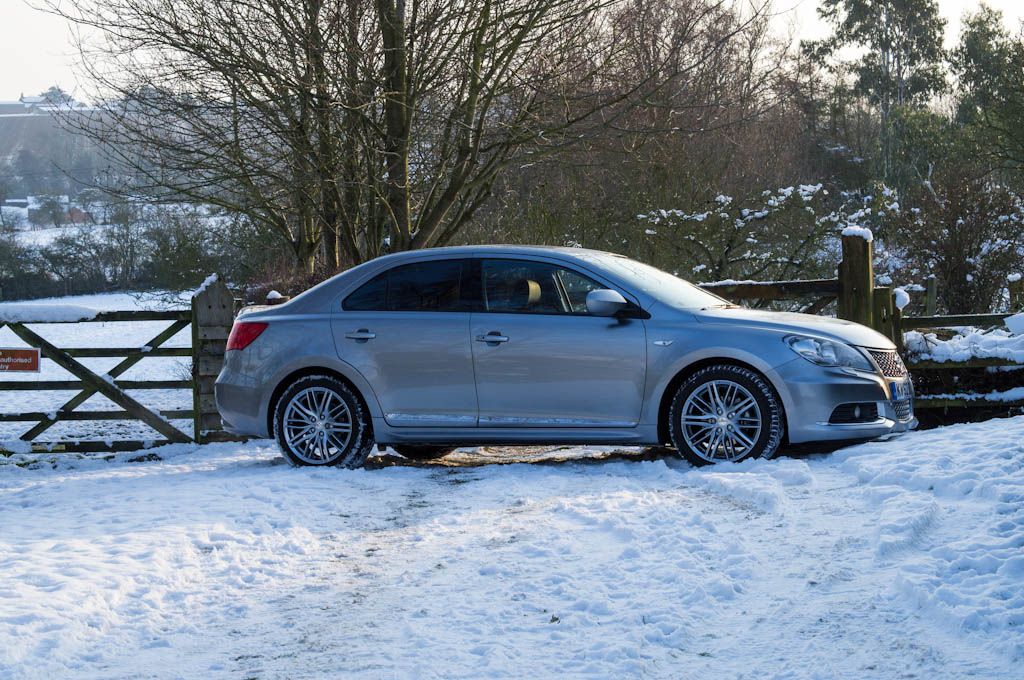 Luckily for us we had the Kizashi for a week that was filled with snow and ice. We managed to drive it through the hills of Lincolnshire, and back home again, without once getting stuck! It was amazing, you could point it up a hilly snow covered road, press the accelerator and you’re off. The all-wheel drive can be switched on or off to help save fuel. With it off, minimum torque is sent to the rear wheels, and the car becomes pseudo front wheel drive. However if you come across a tricky stretch of road, simply press the AWD button, torque is then split up to 50:50 between the front and rear. It’s like magic, you don’t even feel anything when engaging or disengaging the system.

In times of ever diminutive engine sizes, to have a 2.4 litre petrol will probably put a lot of people off. We drove 110 miles, along single carriageways with the AWD system on, and only returned 26.3 MPG. However for the journey back AWD was off 99% of the time so the MPG increased to 28. Not great, but if you aren’t driving thousands of miles a year, I think 28 MPG is acceptable. Urban MPG is quoted at 25, but if you have the car in front wheel drive mode, and use the gearbox manually, you can achieve about 36 to the gallon – so I’ve heard.

The Kizashi has a CVT (Continuously Variable Transmission) gearbox; it works in a different way to a normal automatic. Instead of cogs clunking into place when you change gear, it has a metal band that tensions between two cylinders. This provides it with constant torque, and smooth gear changes. 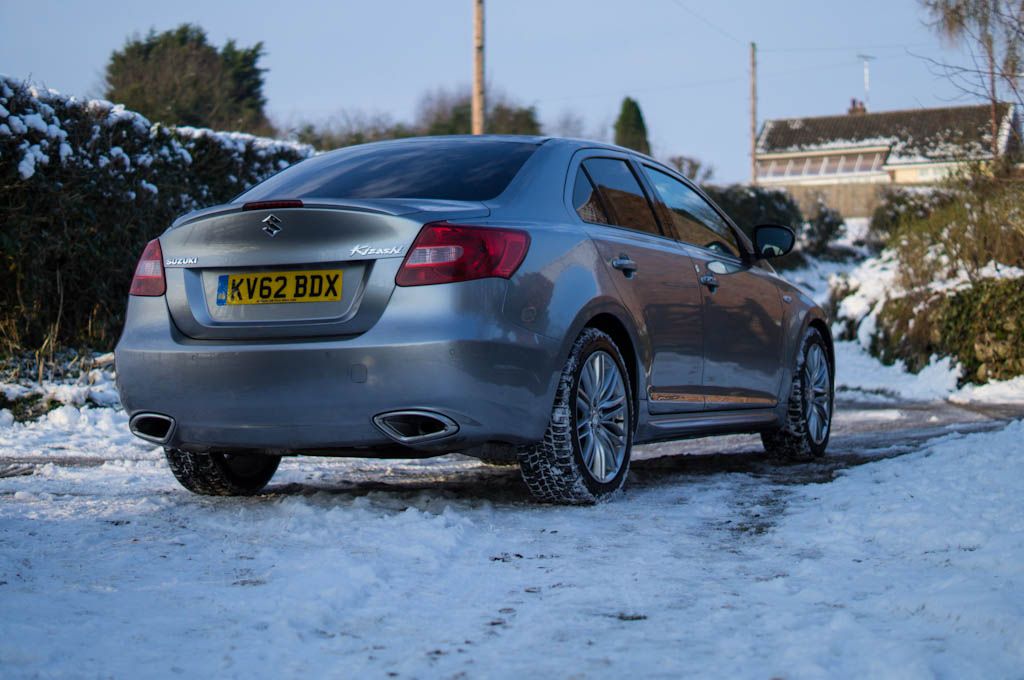 You can leave the car in automatic mode, or select it to manual. The gearbox works well once you get used to it. For example, if you go to overtake, the engine will rev to 6,000 RPM and stay there. You think to yourself “Why isn’t it changing gear?!” but really it’s the gearbox doing the work. After a second or so the car will start to accelerate smoothly. The feeling is a bit like turbo lag, but with more subtlety once the power delivery starts.

When left in auto mode you cannot notice gear changes, there isn’t any shuddering or jerking, you will just hear the engine change note almost randomly. I’m not a fan of automatic gearboxes, so the first time driving a CVT was a dream. It’s how all automatic cars should be.

With its 178BHP, full with 4 adults, plus luggage, the Kizashi pulled well in all conditions. Setting off feels a little sluggish, but I think that’s purely down to the gearbox. It has a 0-60 time of 8.8 seconds, which is quite nippy for a car weighing of its size.

Ride is quiet and refined; the Kizashi soaks up bumps and potholes without fuss. When you do decide to chuck it into a corner a bit fast, you are welcomed with endless grip and very little body roll, like its smaller sibling the Swift Sport it handles brilliantly.

The MPG figures can be blamed upon the large engine, all-wheel drive, and the CVT gearbox. But it is what it is, for such power, linked to an all-wheel drive system; I don’t really think you can complain. 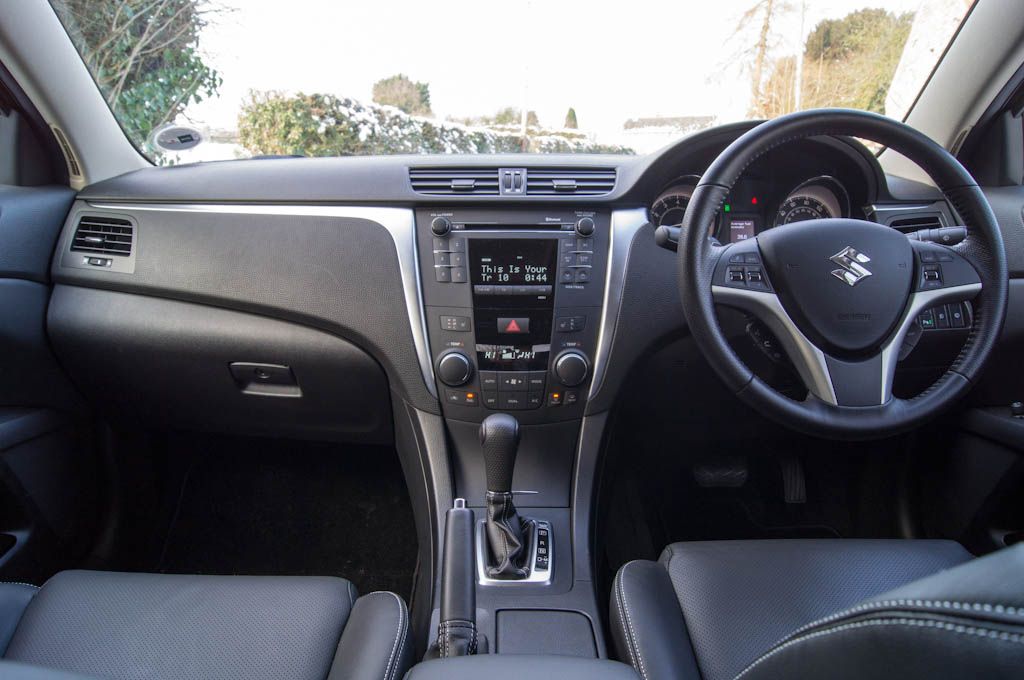 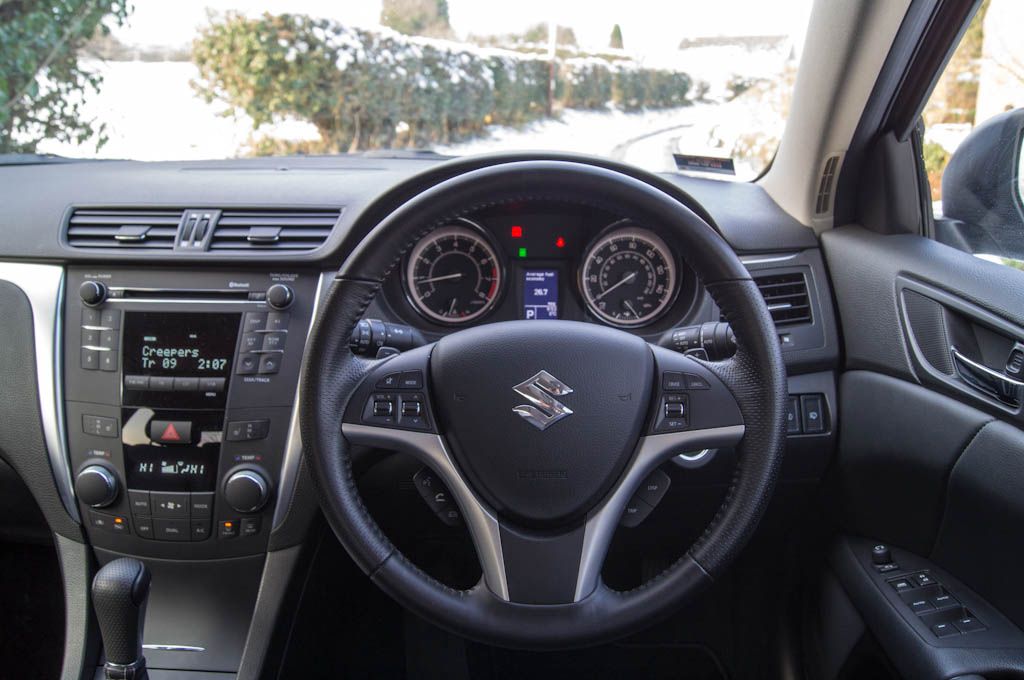 Inside the Kizashi the feeling is of premium. Leather heated seats, smart dash plastics, Bluetooth hands free, and a multifunctional steering wheel are all standard. Between the front seats is a large armrest, that unfortunately doesn’t slide forward, but there is ample storage room up front, along with two power sockets; which is handy. Keyless entry, with a start button adds to the high class feel of the interior.

The stereo in the Suzuki was brilliant, deep, bassy, yet clear. I have been very impressed with the stereos in both the Kizashi, and the Swift Sport, it proves that manufacturers don’t have to provide, poor quality, lack lustre audio as standard.

Sitting in the front the seats are comfy, but I couldn’t shake the feeling that these are seats you sit on, rather than in. They are a lot less hugging than I would have liked, which made the drive feel a little less engaging. 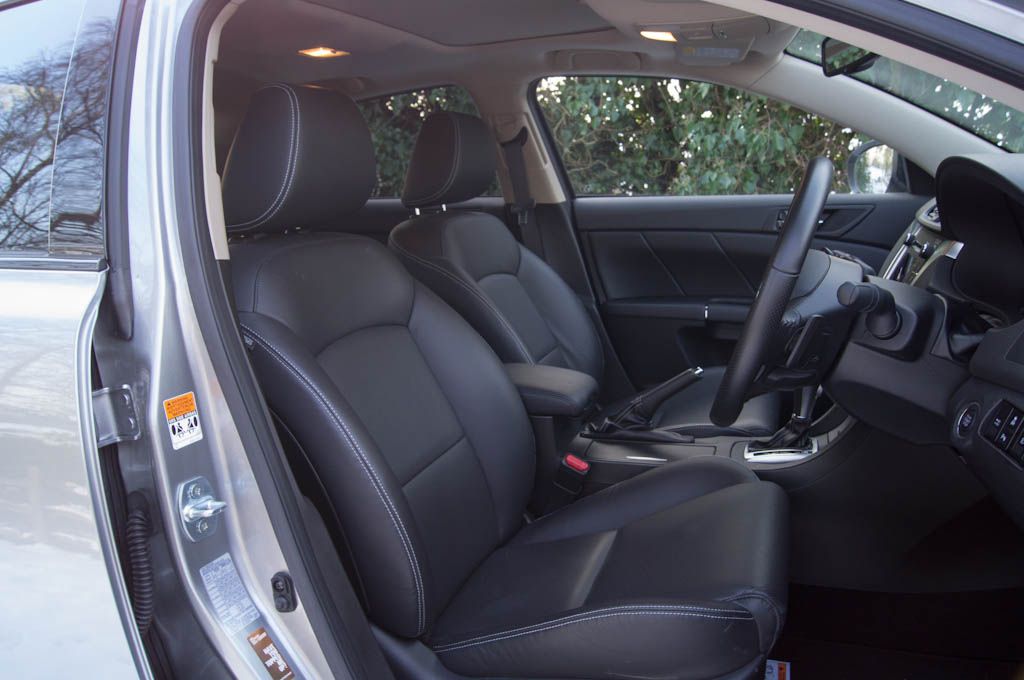 In the back leg room is good, it would be a comfy fit if you’re tall but not uncomfortably so. At 410 litres the boot is small compared to other saloons, but it easily managed to swallow up luggage for four adults on a long weekend. 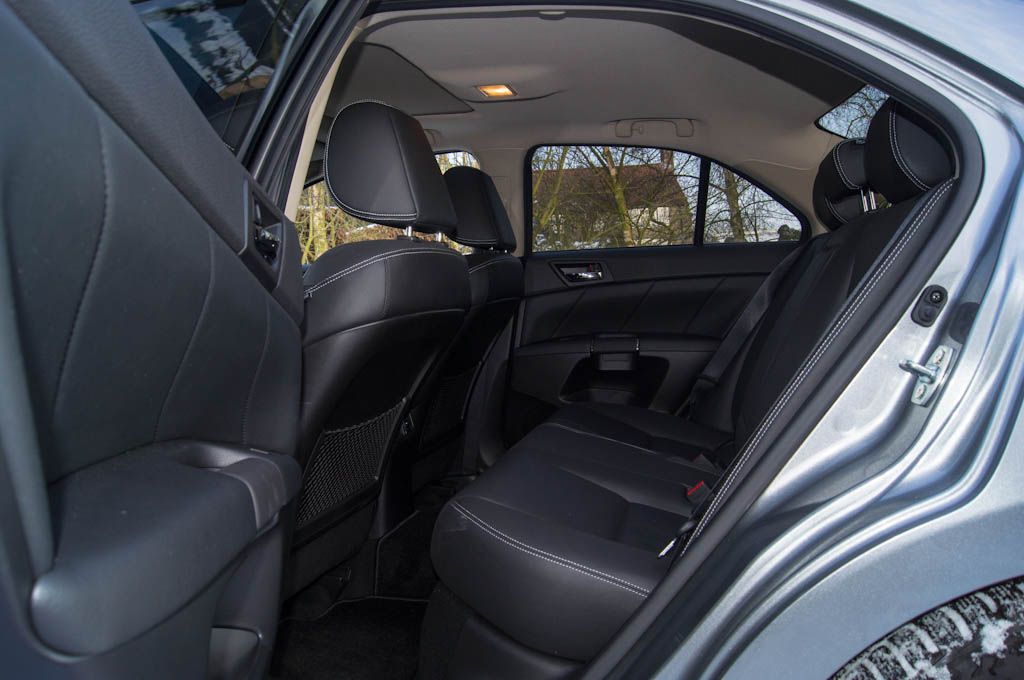 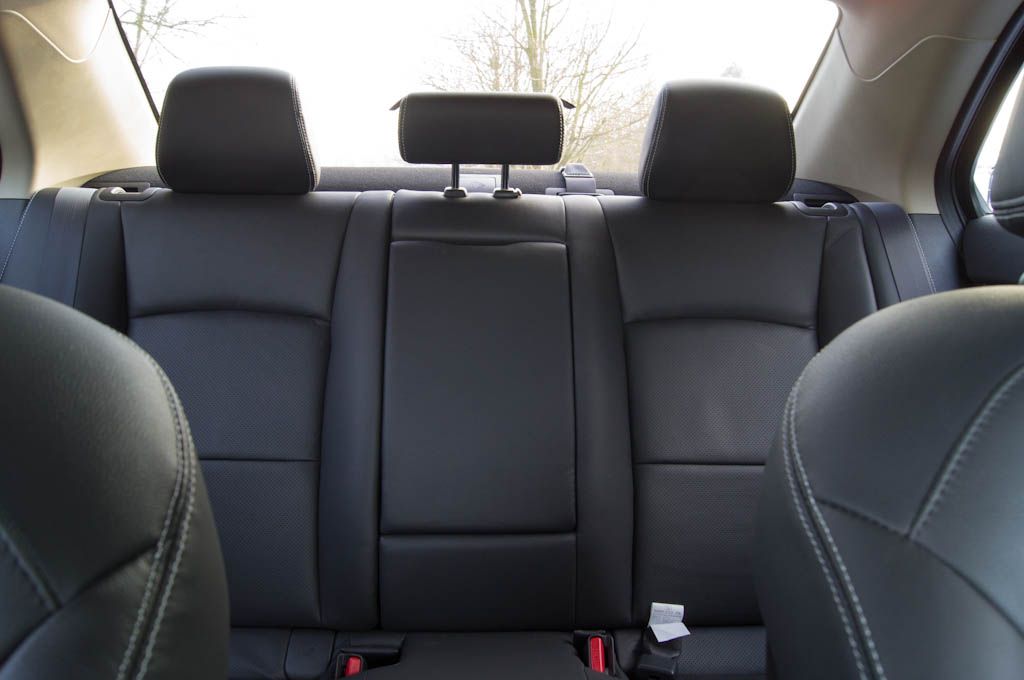 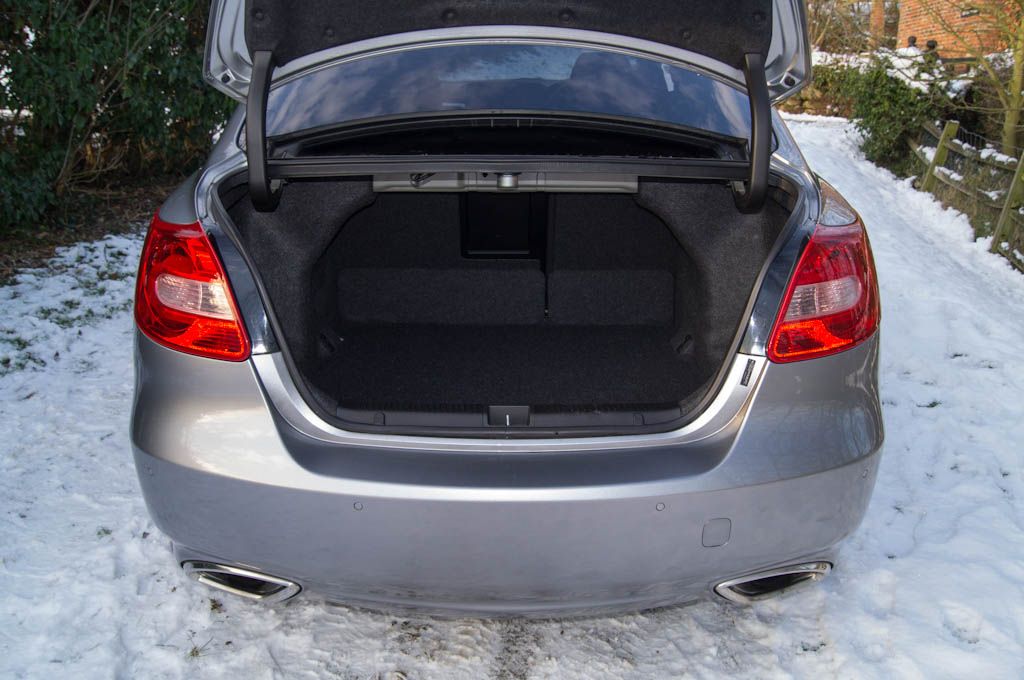 The only thing I would have liked to see is a factory fitted Sat Nav, it is an optional dealer fit, however on a car of this quality I think Nav as standard is a must! 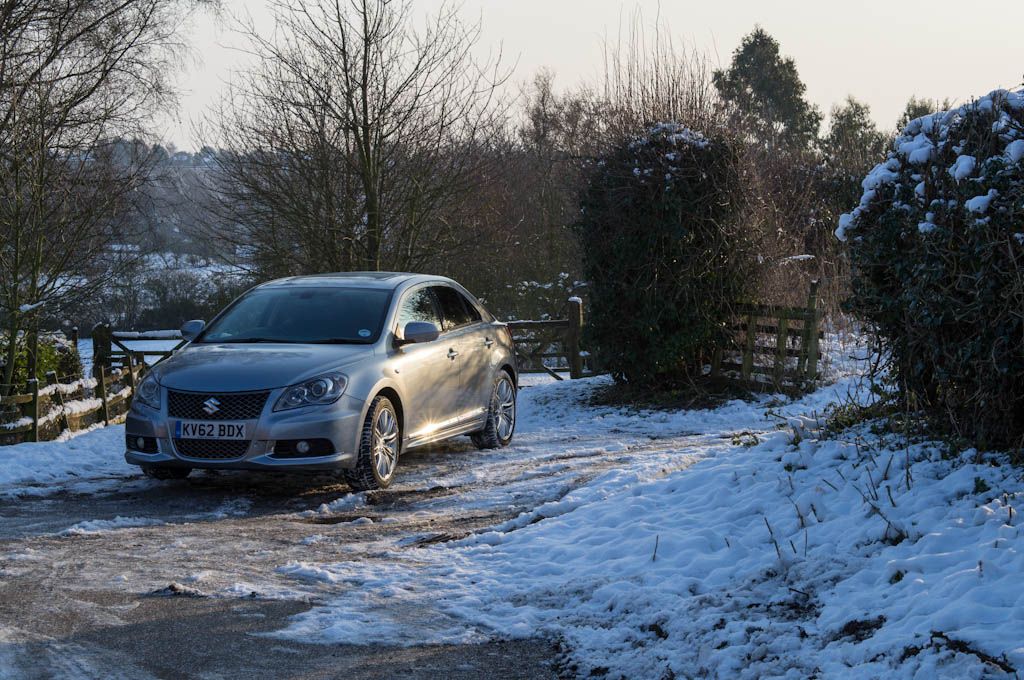 I think the Kizashi is brilliant, I love rare cars and in 9 hours of driving, covering nearly 400 miles I didn’t spot another! With such limited numbers in the country, it’s a safe bet they are few and far between.

It doesn’t achieve great miles per gallon, but that’s due to what it can do. The way it was engineered to be. I have never felt as confident in snow as I have in the Kizashi, and with winters in the UK becoming ever more severe, along with the constant wet weather, it makes sense to have a car that has the option of all wheel drive.

If you need a family car, or an executive saloon for short commutes; yet don’t want the sheep’s choice of a Mondeo, Passat, or Insignia then try out this muscly looking Suzuki. For £21,995 it could well be considered a bargain, it is a lot of car for the money, and with exclusivity on its side…..id have one! 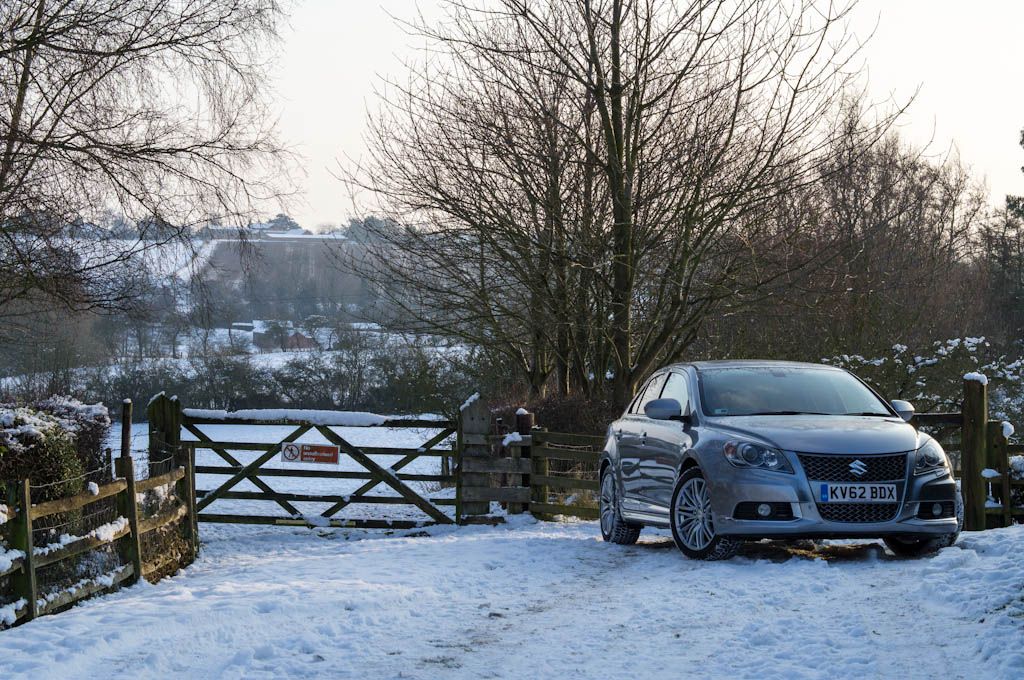