In spite of a partial reveal late last year, the production version of the seminal Mclaren P1 GTR has dropped jaws yet again. With outstanding class, Mclaren has revealed what it purports to be “the best drivers car in the world on track” dressed in the timeless yellow with green striping livery as seen on the Mclaren F1 GTR 06R BPR legend.

Technical details are as follows: the GTR sits 50mm lower than its road going counterpart and 80mm wider.

It develops a road warping 660kg of downforce at 150mph. The GTR is fifty kilograms lighter than the standard car which itself isn’t exactly flabby, some of which comes off with the new inconel and titanium exhaust system.

Propelling the GTR is 800 petroleum guzzling 3.8 litre twin turbo V8 horsepowers in tandem with 200 from the electric motor making for a cool 1000 at the slicks.

Mclaren has also divulged new information regarding customers indoctrination into the P1 GTR program. Simulations will be available to ease them into the forces that a fully lit P1 GTR are capable of inflicting.

The Driver Program sees them invited to an initial test session at Silverstone before attending the first proper event at Circuit de Catalunya in Spain. Owners will partake in Driver Profiling sessions at the MTC where Human Performance Centre assessments will take place, the seats will be tailored to each customer and the liveries for their cars will be finalised. 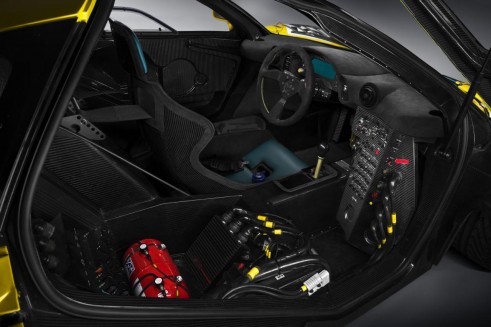 With very little chance of anyone other than customers getting the chance to get behind the wheel of the GTR, our first and best chance of a proper look around it is at the 2015 Geneva Motorshow early next month where Mclaren will be presenting the car alongside its 675LT and Sports Series siblings.

This is sure to be a big year for Mclaren.