Peugeot are giving off some seriously mixed signals regarding their intentions in the performance car market recently.

On the one hand they’ve brewed up the seminal RCZ R and 208 GTi by Peugeot Sport models, which perform notably by comparison to their contemporaries, and on the other, are producing concepts like the 308 R, and then confirm nothing beyond a sub 200bhp lukewarm GT model for production.

The aforementioned road going models are indicative of real ability within the newly resurrected for the road Peugeot Sport wing, to produce exceptional performance cars, and the concepts are wetting the palettes of all who have been to a few too many launches of high performance bright blue Golfs, yet Peugeot remains bipolar.

So what does this newly revealed incredible 308 R HYbrid concept indicate? Firstly then, if their claims are true, it indicates their ability to get 493bhp and over 730nm out of a 1.6 thp/hybrid power train.

Secondly and certainly more superficially, it indicates they are well practiced enough in the aesthetic garnish that a performance orientated model requires. Much more than that? Not really. 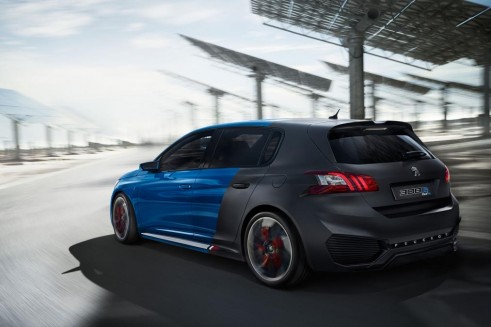 The purpose of the concept in reality is to draw attention to the standard 308 hatch which needs to do well in China.

It is also, so say PSA, a showcase for what the power plants of foreseeable performance models will look like. Hybridisation is to drip down into the humble hot hatch, but probably not for the 308 itself.

The 267bhp 1.6 Turbo that makes up the petroleum partition of the Hybrid power train in this concept will later this year make its way into a road going 308 GTi, and hopes are high for that, but without a serious weight loss program, that power figure will look somewhat conservative alongside the likes of the Golf R, Audi RS3 and Focus RS.

If priced in parallel with the ST and GTi, then it may well represent a serious lower level competitor.

With the old 205 T16 in mind however, I remain dimly hopeful for a return to the ridiculous performance that Peugeot Sport was once known for.

Until then the 308 Hybrid R is indicative of a bright, if somewhat distant future, and it shows intent. Less concepts and more road cars please Peugeot! We know you can do it!

Hyundai – A Message to Space – SPONSORED