The Nissan Skyline GT-R has been a cult legend since its inception in 1969, back then the KPGC10 – Hakosuka  as it was known – produced 160 HP and 177 Nm of torque from a naturally aspirated 2.0 litre engine.

Oh how things have changed in the last 40 years. The Skyline GT-R evolved over 5 generations up until 2002 when the R34 production ended, to replace it Nissan dropped the Skyline name.

It was now to be known simply as GT-R. And the legend continued.

Since its release power has been bumped up numerous times, with the 2014 model now producing 545 BHP and 627 Nm of torque…but thats still not enough for some buyers.

Litchfield based near Gloucester,  have been tuning cars for the past 15 years, and with the GT-R being such a great starting place they turned their attention to developing performance upgrades for this Japanese beast.

With £15k and a bit of work you can have a GT-R pushing out 750 HP or more. We caught up with the proud owner of a Stage 4 Litchfield Nissan GT-R to find out what it was like to own. 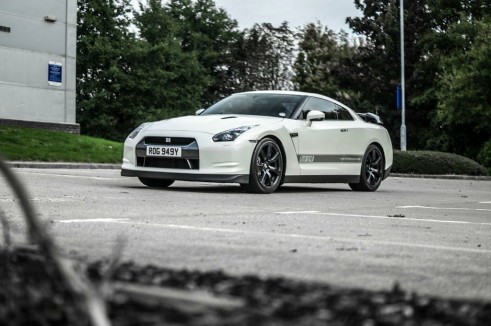 The Civic Type R was first real sports car I had, and I loved it.  It had the most amazing gearbox and fantastic VTEC lift.

But my favourite has to be the GT-R as it is the complete car, and never ceases to make me smile…even three years on. 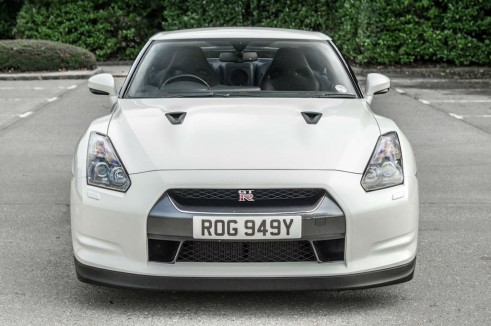 What made you buy the GT-R?

I had a 350z for 3 years over 60,000 miles and loved it.  The GT-R was the natural step up, and the legend of Skyline, the accessible performance and the fact that it would kill any supercar in an ‘everyday’ body was very compelling.

The ‘legend’ around the brand and the fact that is it is so much cooler to drive a Nissan than an R8, 430 etc was too tempting.  Never, ever regretted it (except maybe when pulling into a Shell garage, which happens a lot). 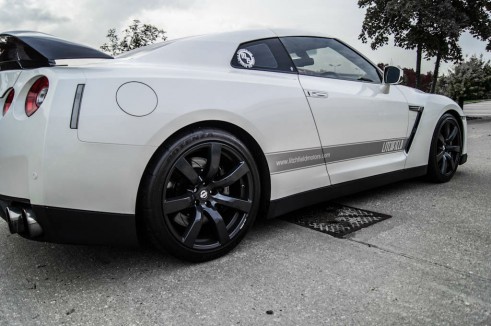 Have you owned it from new?

Yes. I was able to have the first 60 plate on the road, so  i had the bonus of the dream car and that brand new car smell!

The fact that, even though it is a five year old model (and mine is three years old) it is a joy to drive, it makes you smile and it still gets serious attention and respect.

My favourite thing is, having owned it longer than any other car, I looked around and there is simply nothing out there to touch it…still. 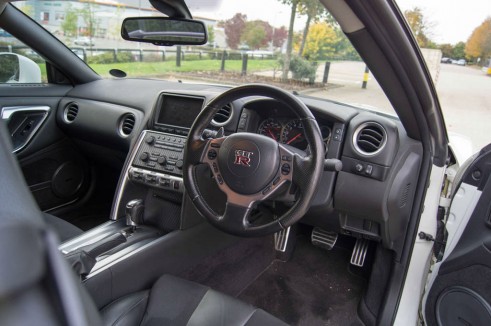 The interior isn’t the greatest if we are honest – if it had an Audi interior and the drivetrain from Nissan it would be beyond anything.

Obviously better fuel economy would be nice but that comes with the territory.

On the stock car everything I would have changed I already have with the help of Iain Litchfield. 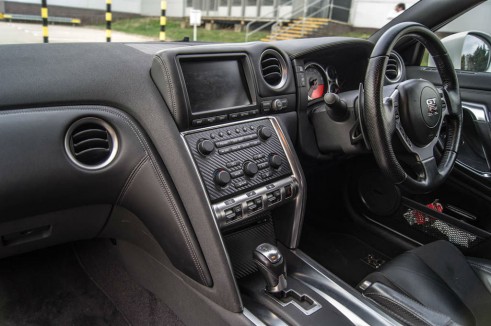 Actually very good.  Not horrifically uncomfortable and the seats are fantastic on long journeys.  Fuel economy on a run is around 22-24 MPG, it has Sat Nav, decent stereo and the boot will take two sets of golf clubs and overnight cases.

It is my only car and a ‘daily drive’. It goes to Ikea, the supermarket, B & Q the lot!

As well as driving to and from any events where it can be driven more ‘enthusiastically’. 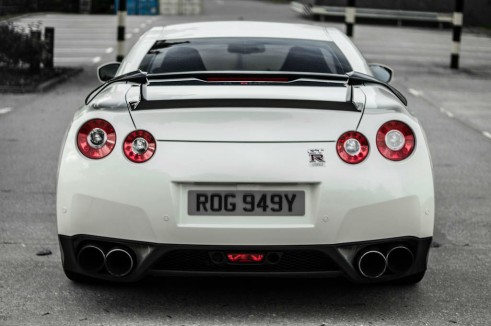 Depending on how you use the car it differs hugely.

I have done a number of track days and race events like ‘Ten of the Best’ mixed with everyday driving and the odd trip to the ‘ring so it has done a perfect mix.

I have actually scared myself a little writing this down as it does mount up! 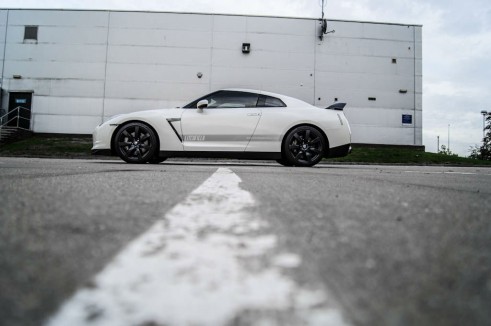 How long are you planning on keeping it for?

I considered changing it at three years, but having looked around at everything there is nothing else I would rather be driving!

Coming into Copse corner at Silverstone with racing driver Jake Hill beside me and the brakes decided they were going on strike.

Obviously we weren’t going to trouble an apex so we gracefully drifted across track, then a kerb and on to a run off towards the fast approaching wall.  Luckily the speed scrubbed off enough to get it all back together…but it was a fun 5 seconds or so! 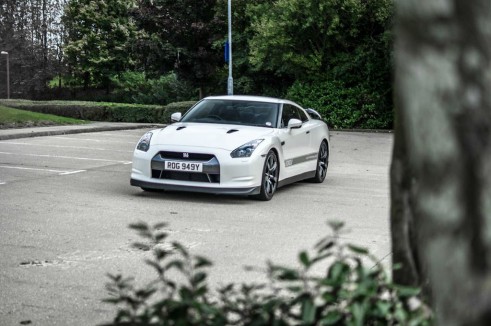 Only recently now I have the latest ECUTek map which transfers the Traction Control during launch to ECUtek from the Nissan stock one – makes a fantastic difference to the launch control!

People often say the GT-R isn’t a real driver’s car, as all the technology built into the vehicle keeps it on the road, turning even mediocre drivers into Gods, what do you think to that?

It is an argument which has raged from Top Gear and Evo magazines to forums etc.

I think the only real answer is that it does flatter a driver on the road as the talents are so far beyond what you can achieve on a road it appears mundane and boring. Having said that if you are driving it closer to its limits it comes alive – working with the computers, searching for perfect torque distribution and grip is a fantastic feeling.

Obviously the better driver you are the more you can get out of the car – why shouldn’t fun be accessible to everyone? 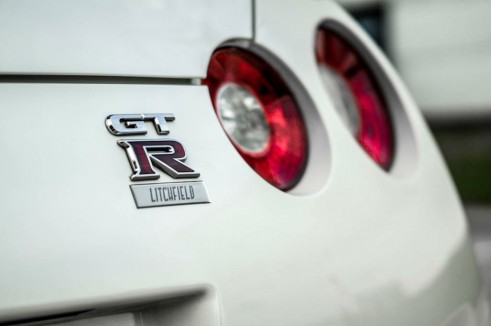 You have some quite extensive modifications on the car, with it now running a Lichfield Stage 4 map.

Was it not quick enough in standard form?

Its not really about being quick to start with.

The first mod was to make it sound like it goes with a Y Pipe.  Once you do that you have to get it remapped and once you see what even a minor update can do it’s a slippery slope.

The common upgrade path is now to a stage four which, ironically, is following the sort of upgrade path that Nissan are doing with the stock car.

A Stage Four car runs about 620 BHP with a free flowing exhaust, and the stock car is at 550 this year and who knows what next. So the difference, while being markedly different on the MY09/10 cars it’s not so much of a leap for the MY12 + cars.

Once you put downpipes and intakes on, the noise and the driving response is transformed and a stock one feels, if you can believe it, a bit slow and dim witted… 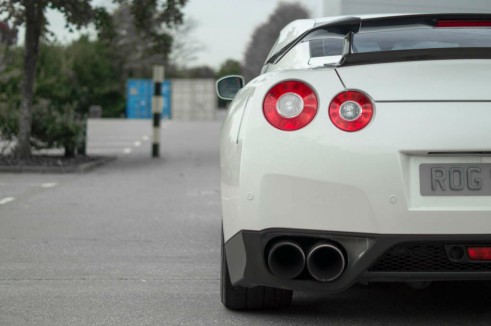 Mizuno San (the R35’s creator) has expressed strong views that the car is perfectly balanced the way it leaves the factory, and that it shouldn’t be touched.

What would you say to that?

That’s very Japanese and I respect the fact that they stick by their product.

What it doesn’t account for is the fact the car is perfect for every market in the world and every weather condition etc.  US cars run on 93 octane fuel at their top end, and we have 99.  The Germans can even get 102, so it has to be flexible and be able to cope with missed services, customer abuse and sustain a warranty worldwide.

All tweaking it does is make sure it focuses you on the lesser headroom for failure, and means you need to be bang on with your tuner and oil changes.

I do my diff and transmission oil around 30% more frequently than Nissan suggest, and most people who drive them hard do it even more often.

The brakes…well they were changed by Nissan for the MY11 model after the issues they had with discs cracking but they still weren’t right even for everyday proper road use, most owners now go for the cheaper aftermarket disks and pads for better performance and economy. Another view that always crops up is that the GT-R is far too heavy at 1740 KG, do you agree?

Another interesting question – Mizuno-san always said that the mass of a Formula One car was 600KG ish and its weight, at peak down force, was about 1700 KG – ironic that!

Of course making a car lighter will help acceleration and cornering, but the biggest improvement would be under braking for me.

The issue is the drive train is so heavy that making it significantly lighter is actually very difficult, without huge expense of carbon fibre etc. 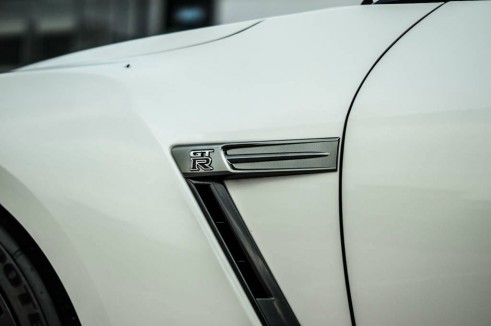 Odd bits like the bell housing which is a well-documented issue, that was replaced no problem.

Headlights can be a pain as the seals allow in moisture and blow bulbs – I am on five replaced thus far.

The only other issue was a slight yellowing of the bumpers with the white on plastic as opposed to metal and a worn seat bolster all of which were sorted by Nissan with no hassle! 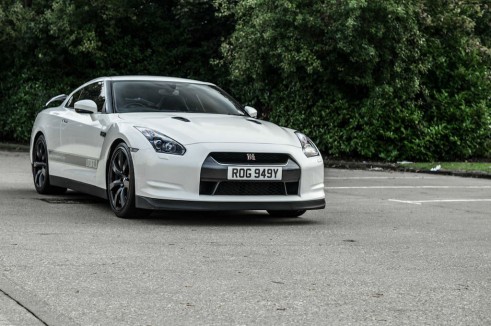 Do you take it on track often?

Not as often as I want but then the tyre bill would be horrific!

The GT-R Owners Club support Asda ‘On Your Marks’ charity day at Bruntingthorpe giving fast passenger rides to paying public and terminally ill children – we have supported this since the beginning 12 years ago and I did my third year this year.

It has done 20 laps of Silverstone GP circuit and two years at ‘Ten of the Best’ at Elvington so it’s been driven properly, but never abused and gets full fluid changes after each event. 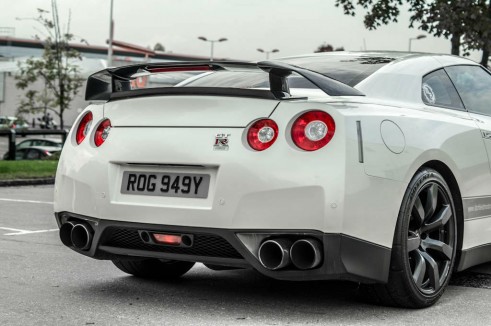 What modifications have you got planned?

Iain Litchfield Bilstein/Eibach suspension is probably the biggest upgrade in the pipeline and since being asked to do this article I have upgraded from the 90MM to the 102MM GTC Titan Titanium exhaust system for freer air flow and a fabulous sound track!

Here’s how it sounds!

Epic, just epic.  Faster than pretty much anything out there yet attainable and almost practical.  Rare, desirable and never, ever ceases to make you grin on your favourite road. 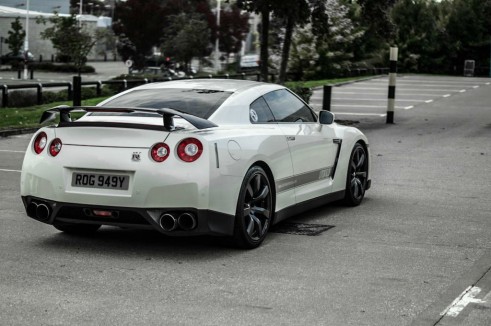 We would like to thank the owner, and the Nissan GT-R Owners Club for their help with this article.