Peugeot originally released the 106 back in 1991, but it was lacking the sporty hot hatch aspect that Peugeot had become so well known for with the legendary 205 GTi. They decided to release a stripped out, extreme 106, it was named Rallye. I’d have to say the MK1 Golf GTI.  Perhaps because it was my first car, I look back with rose tinted spectacles! But it still remains the most enjoyable car I’ve ever driven.  I still own it and hope to have it restored one day… 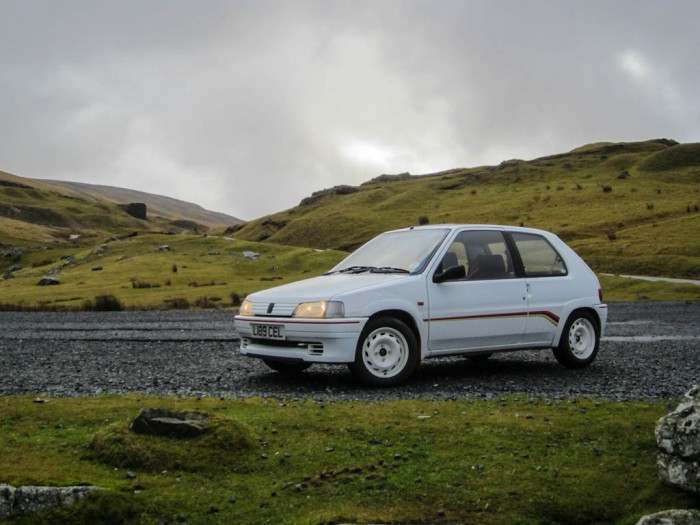 As much as I love my current Fabia, I missed having something petrol and high revving.  Last year I found myself with some spare time and spare cash so decided to buy something fun to play with.  I love hot hatchbacks and the 106 fitted the bill nicely Whilst I don’t mind the look of the S2, I prefer the boxier looks and some of the smaller styling details of the S1

It has to be the engine, it is a great little unit which pulls well throughout the rev range, but it really screams once you get over 5k RPM, and keeps going to more than 7k with a lovely induction roar even using the standard air box!

I’d have the seats mounted lower, at 6’5” it is a bit of a squeeze; and there is no way I can currently fit in it with a helmet on if I wanted to take it on a track day It has always been a second car for me but I’ve used it on long (200 mile plus) journeys and for commuting on occasion – it has been great.  After a few miles of driving you get used to its controls again and despite its age, it becomes relatively easy to drive. The car had been stored for 4 years before I bought it, so there has been a rolling programme of re-commissioning works but nothing unreasonable. In nearly 18 months it has only failed to start once and this was traced to a cracked coil pack…not bad for a 19 year old car

No, I have used it for a week or so at a time for commuting, but it usually comes out for fun drives as and when the weather permits.  Recently it has been used even less though as it now lives in a garage 30 miles away from where I do. 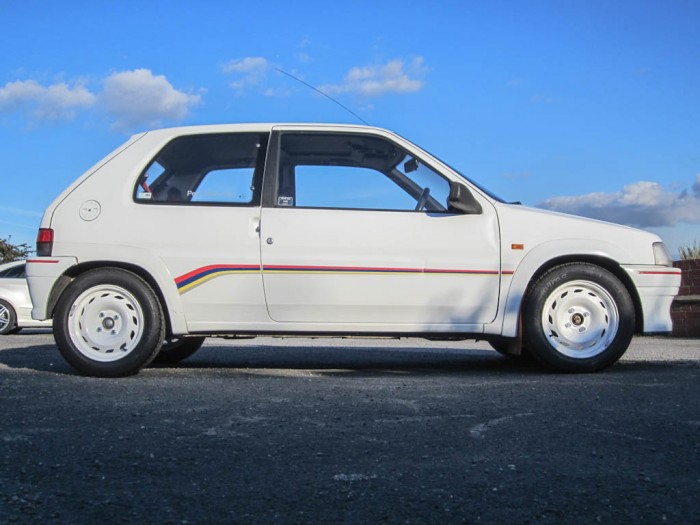 How many miles does it have?

It has now covered about 114k miles.

How many miles have you driven in it?

I have covered about 3-4k miles in it 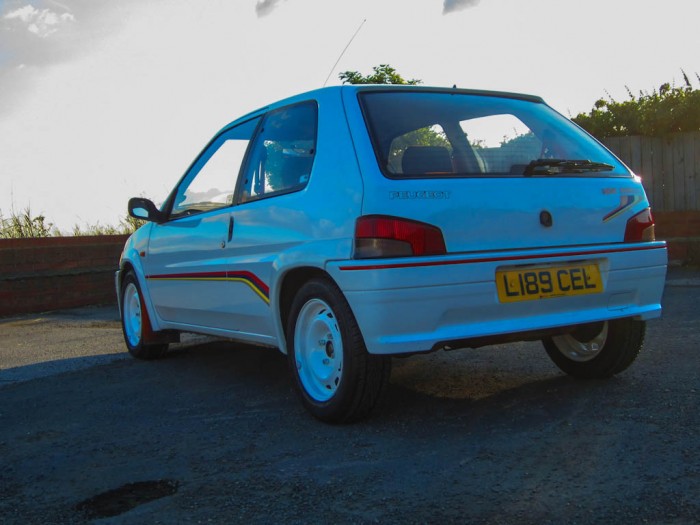 It has been a relatively cheap car to run, tax is about £130 a year, my insurance comes in at under £300 on a limited mileage policy, and parts are generally cheap.  I haven’t measured the MPG but it doesn’t seem to be all that efficient on fuel, although given that its 19 years old and goes best between 5-7k rpm I’m hardly surprised How long are you planning on keeping it?

Make me an offer I can’t refuse…

I did take it for a spin on a typical Welsh mountain road over the winter, the main roads were fine but as it turned out the mountain road was still somewhat icy and it got pretty slippery, lack of ABS didn’t help either 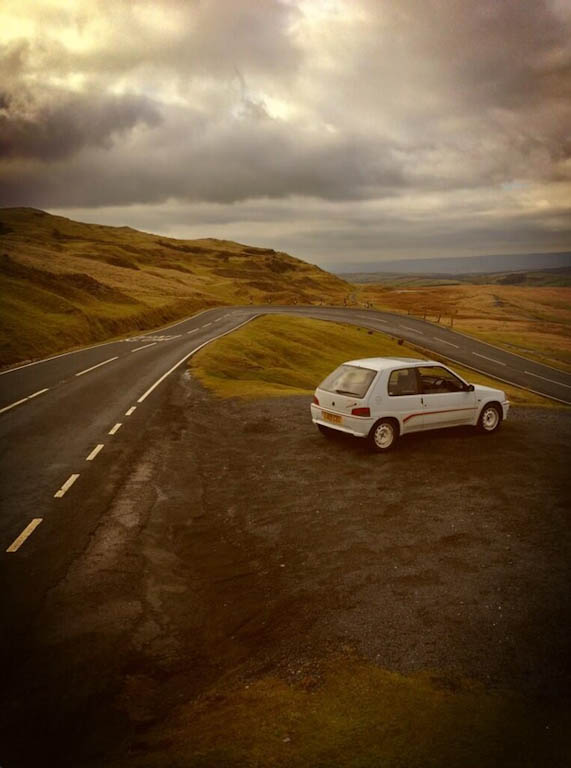 The coil pack and crank sensor were replaced when it refused to start and its exhaust did once drop off…but it has now been replaced from the downpipe back.  Otherwise it has just required servicing and minor fixes

Would you ever take it on a track?

I’d love to take it on track, and half had that in mind when I bought it…but since I physically can’t fit in it with a helmet on it would require me to install bucket seats, and this isn’t a route I want to take.  For the time being, the Fabia will have to continue its track duties 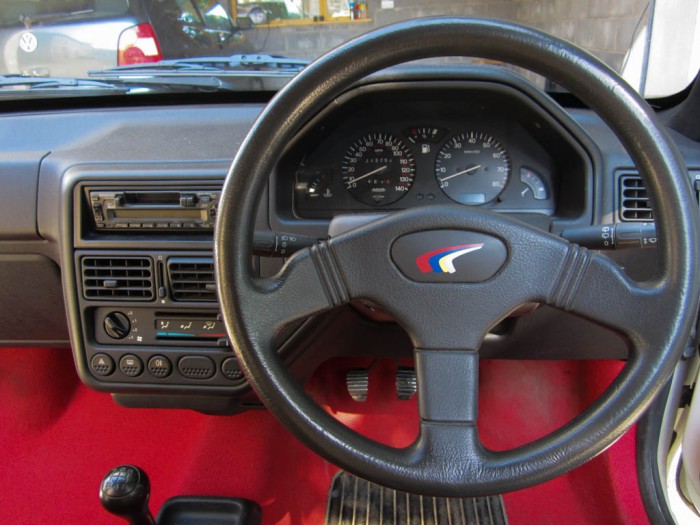 Have you made any modifications to the car, or are any planned?

No, given that standard 106 Rallyes are getting rare now, I’d like to keep it as original as possible and have tried to ensure that all parts I have replaced have been standard

Your quite a tall guy, how on earth do you fit in it?

It did take a bit of getting used to but it isn’t too bad now.  The driving position actually suits me quite well, although I do have the back of the seat fairly well reclined Ever had any rust issues?

No, this is part of the reason I bought the car.  It was dry stored before I bought it and has been dry stored for most of my ownership.  There are a few tiny spots from chips etc and obviously some of the general corrosion you would expect underneath on a 19 year old car, but I’ve had a good look over the underside with my local garage and have been advised that it is remarkably sound

The 106 Rallye is a rattly and noisy little thing, but delivers a very ‘pure’ driving experience, with no electronic aids to get in the way.  It is a frantic car that thrives on revs and is happiest above 5k rpm, keep it in this range and you can maintain a huge amount of momentum on twisty roads.  It is a very ‘old school’ car and you have to remember that it will bite if pushed, but the limits are high so the potential for fun is huge…and let’s be honest, with steel wheels and multicoloured decals, it looks brilliant! 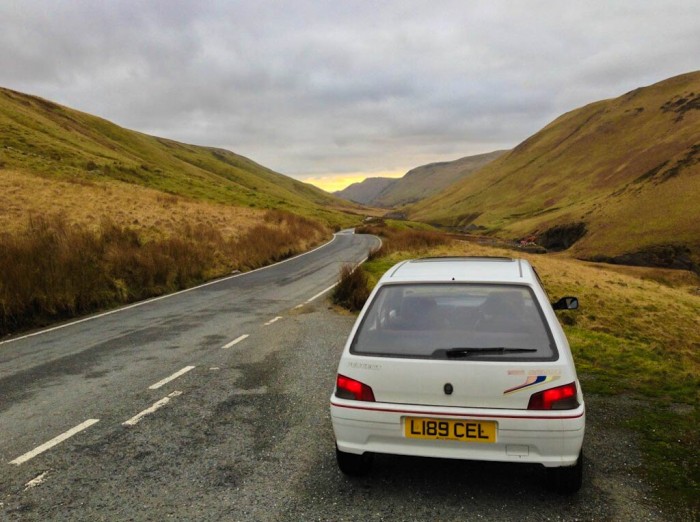 Carwitter would like to say a big thank you to the owner, for taking the time out to help create this feature.