Movember is now long over as the nations freshly shaven gents are now lamenting the onset of Christmas and reflecting on 2013, but at the beginning of the month I helped kick off Movember in a bit more style. This, was a defining moment for my 2013… 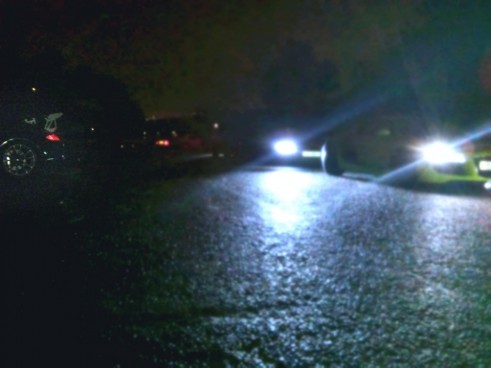 Following an invite from a friend of mine, one Tim Burton aka Shmee150, myself and a mate leapt head first into some pretty brutal rush hour traffic down the M11 from Cambridge to central london. After some dancing between some of London’s prettier constructs unsure as to what direction to take we eventually convened with the MoMyRide lot at the serpentine car park just before stage 2 of the run began.

It was fairly sudden and breathtaking. One moment we were weaving between double deckers taxis and the odd Bentley at best, the next we were drowning in exhaust noise, fluorescent green wraps and stick on bonnet ‘taches. Needless to say as we pulled in, gawping at two Audi R8s and a Ferrari 458 making their presence at the cruise known having arrived shortly after us, we were in heaven.

Any feeling of self consciousness given our humble chariot was dispersed. “Its not what you’re driving, its that you’re here that counts”. 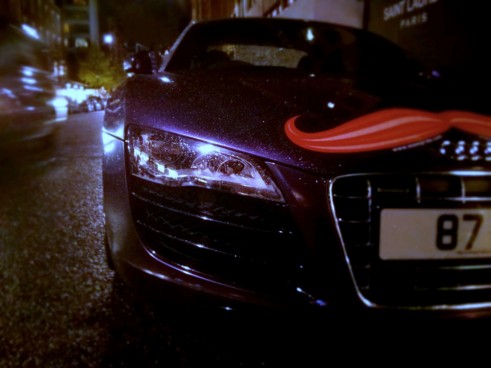 It was a fairly sedate trundle out of the serpentine car park but once out on the road everyone lit up. The evening was a celebration of car culture, charitable giving and good feeling. The pack quickly bled out as the GT3 RS leapt out in front with two R8s and a Porsche 991 shortly behind. Keeping up as best I could I decided to hold on to the lime green VX220 and god was it a challenge. 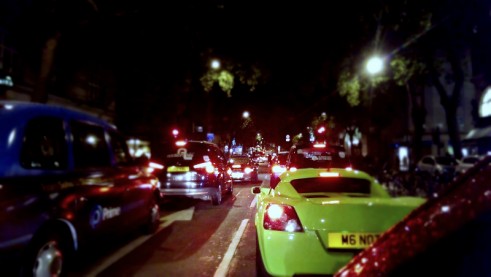 The peculiar thing about lunging a million pounds worth of supercar around London is that the city is full of tight areas and blind spots constantly evolving around you. Vigilance is key and thus patience too.

As a result the plucky tool in the 106 desperately trying to keep up, once he’s found his rhythm, finds it somewhat easier given the cars London-friendly dimensions. A relief. It wouldn’t have been much fun to be left mingling with the cabbies. 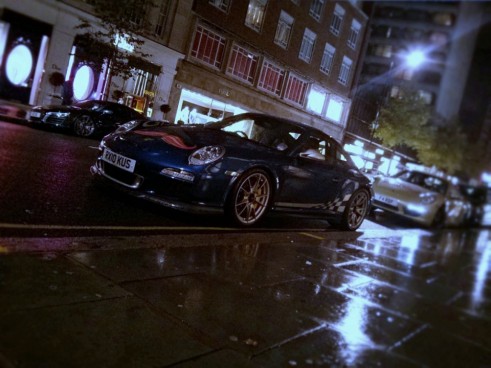 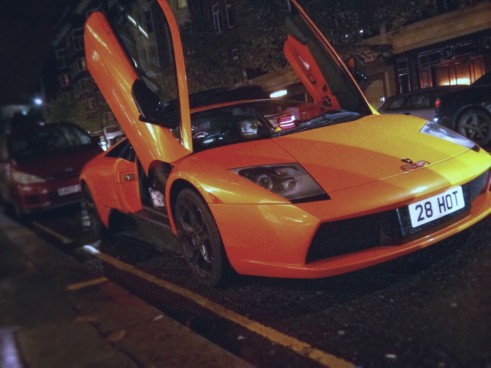 Following a quick stop at the side of the road (yes, it seems a stream of supercars can do that without qualm, even in London) we depart again, following width issues in the road between a double decker and a Murcielago, for westminster bridge – a less disruptive stopping place. Moments beforehand one of the drivers runs up to the window exclaiming “theres a tunnel up there”, gives us the task of hogging the two lanes behind the pack and sprints back to his car…

Sure enough the pack launch out into the street, swiftly disappearing into the tunnel. With Londons wrath bringing up our rear we let go and chase them down (with little hope of success), burst into the tunnel where we are met with air thick with the sonorous wails of supercar song and whisps of unleaded 97. One of the most memorable experiences of my life… 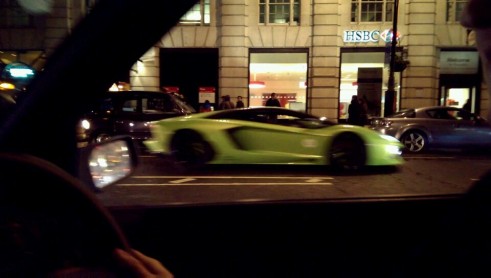 Interesting side note: Even participants of a supercar rally can be upstaged, but only in london. See pictured, An Oakley Design Lamborghini Aventador and a Hammann BMW M5, the latter shot rather appropriately outside BMW Park Lane… 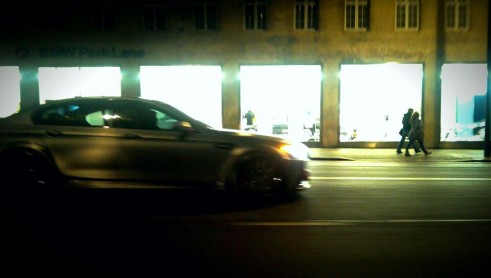 Big Ben and westminster bridge loom and It’s here I get the best look at the line up. The aforementioned Murci’ had joined late and was stealing the show in its bright orange with black wheels configuration. Tims R8 led the pack with the other R8s in tow.

To the back we sat behind the fantastic lime green VX220 which realistically was the only car in the group able to manoeuvre between Londons worst as effectively as the little 106. Whilst waiting for proceedings to fire up again an elderly lady walking beside the pack asked what was going on to which I replied, a charity sports car run. She smiled, proclaiming how lovely it was doing it for a good cause, and wished us a safe, fun evening. Utterly joyous. 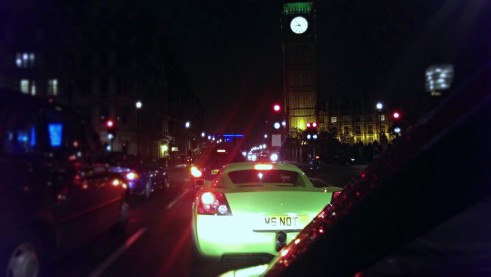 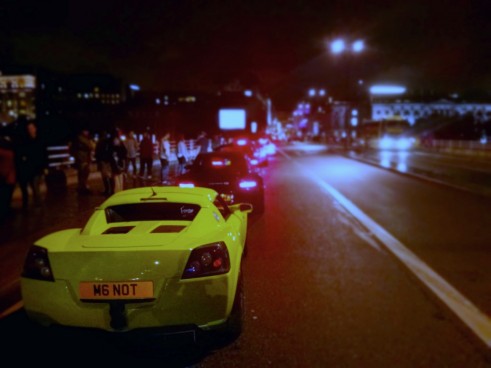 We depart, GT3 screaming westminster to its knees, with little left of the evening to go. Most of the pack peel off into the distance with more compliant roads, a Quicksilver R8 is all we have left to hang on to. 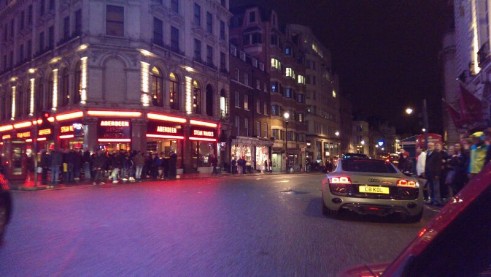 Last stop, Sloane street before we leave for home. What better a place to conclude than that iconic for its exotic machinery presence over the last three or four summers. A road christened ‘a Le Mans starting grid’ by disgruntled residents in the past in response to the noise. A few snaps, swift goodbyes and before we knew it we were heading back up lamenting the imminent journey home. 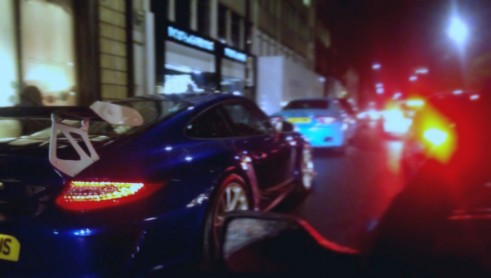 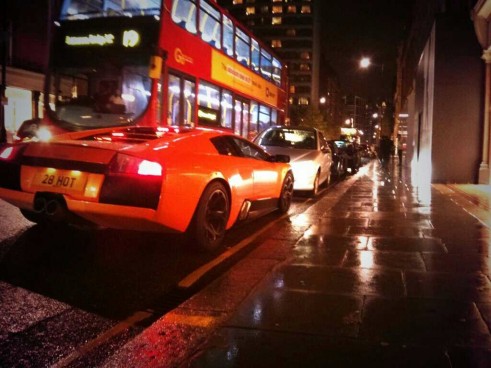 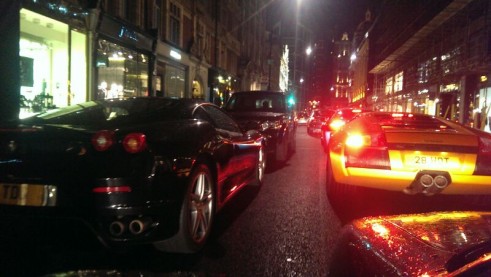 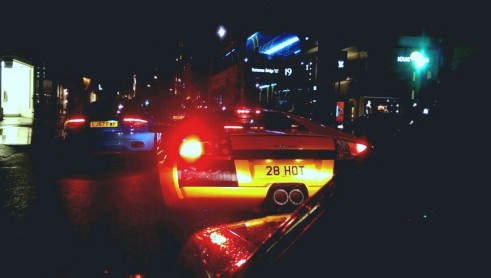 What an experience though. And all for a great cause…MoMyRide will undoubtedly back in 2014!