An hour with the Aston Martin V12 Vantage S

Having been invited to a customer and press day for the V12 Vantage S at Aston Martin Cambridge, I really didn’t know what to expect.

I turned twenty two days beforehand, so I wasn’t deluded into thinking i’d get there and a queue of potential customers would be denied their taste of Astons latest, greatest B-road belter as the managing director chucked me the key.

Nonetheless I wanted to see the car in person and spend whatever time with it I could. I’m usually somewhat skeptical of this sort of car, that being, something with an air of the “last hurrah” about it. These are usually overly garnished and unjustifiably steroidal looking, brightly colored versions of cars we’ve in reality been used to for the prior five, or six years.. Lamborghini Gallardo and your 11 years of service, i’m looking at you. You buy one thinking its the greatest, most special thing and before you know it your latest jewel is wilting in the shadow of the next generation. I could be forgiven then for looking at this Vantage, which has existed in concept for ten years now, with similar disdain at first glance. However, this is of course no ordinary Vantage, but you already knew that… 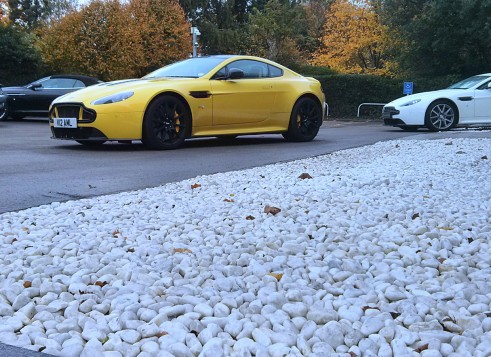 So what makes it different from the standard Vantage? Look no further than the V12 on which it’s based and 90% of its story will be told. 2009’s upgraded 12 cylinder powerplant itself receives an upgrade, benchmarking alongside its Vanquish sibling at 565 bhp. Torque is up too, to a commendable 620NM with a view to allow a smoother range of delivery across the rev range. Aston claims the V12 S will dispatch 62 in around 3.8 seconds and top 205mph. These figures are very much up to todays standards. There seems to be no holding back on this one. Upon startup that typical Aston Martin V12 gargling of blood denotes a flagship with added bass and crackle. 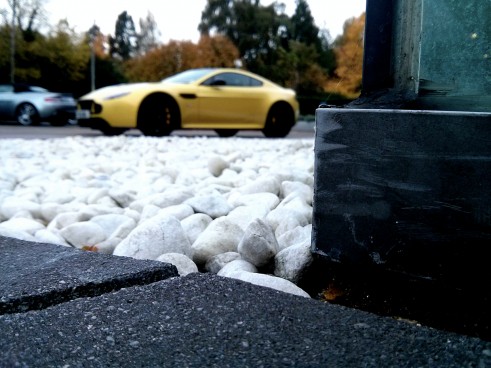 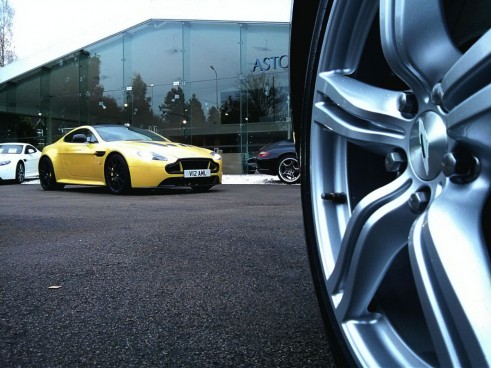 What you’re met with first, though, is how visually striking the V12 S is over any of its softer, more handsome and really quintessentially english siblings. Thats not to say it isn’t beautiful because it really is, but that GT spec brace face, the forged matte wheels, the “yellow tang” paint scheme and black hatchback bandanna on this demo car perfectly epitomize the harder sports car philosophy that the Vantage was always supposed to have had.

The carrying out of this isn’t  just skin deep either, nor for that matter one of simple power gains. S stands for ‘serious business’ in the world of Aston Martin and this Vantage is no exception. Carbon ceramic breaks a la Vanquish, lightweight forged wheels, and the capable ‘Sportshift III’ hydraulically actuated automated manual transmission saves kilos and sharpens up the V12 Vantage to make it an exceptional sports flagship.

Dr Ulrich Bez holds that “The new V12 Vantage S is, simply, pure Aston Martin. It is extreme in its nature yet truly timeless in its design language”. Spend a bit of time with this car and you get a feel for what he’s talking about… 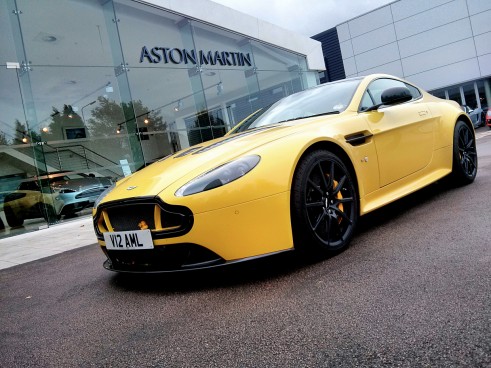 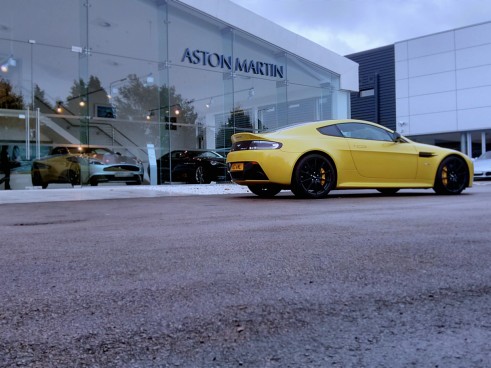 As with any premium sports car, and particularly in Aston Martins, the cockpit is as much a focal point as the design of the body. For V12 S the steroidal symbiosis of over the top and functionality runs into the inside. Slide less than gracefully into its cabin and you find yourself in the embrace of its gorgeously upholstered bucket seats, offering the support and comfort alien to most performance orientated models such as this.

Swathes of alcantara and lashings of that bright yellow accompany the industry standard obligatory carbon trim. Its a typically garish livening up of a slightly aged interior. The Vantage’s age is somewhat exposed more than anywhere else from under the paraphernalia in this area, but where this would somewhat add insult to the injury of gimmickry in other aging machinery, securing their finality, in the Vantage it feels not at all out of place. I feel the car is as purposeful as it looks, no more and no less, in every area. Crucially, none of the additions feel like they’re a smokescreen or disguise for the cars lengthy period of service. 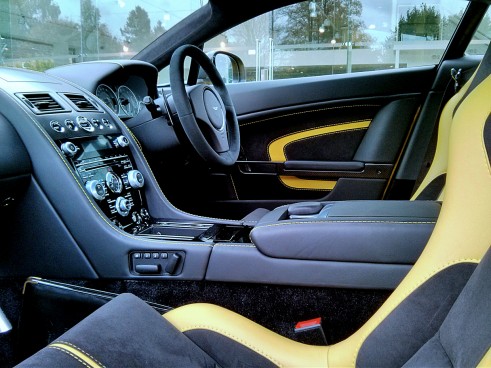 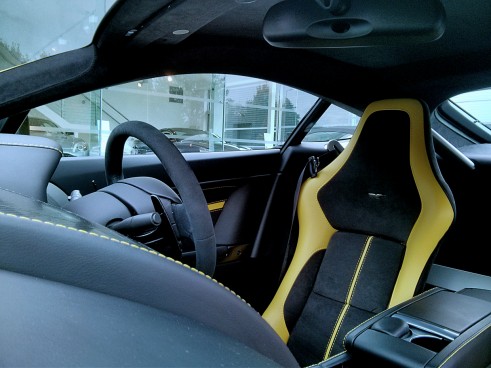 As in all Aston Martins you just have to drink in the delicious details. Granted the “emotional control unit” is as gimmicky as the day of its inception, but nowadays it feels natural in an Aston, and a legitimate part of the experience. I personally am very much an alcantara over leather guy and consequently swooned the moment I sat in this car. It has an air of exclusivity about it that is just perfect.

It is hard to escape time in the motoring world, and nowadays with advancements making headlines by the hour and competition hotting up, the interior is especially dated in feeling. A dousing of Vanquish interior facelifting would not have gone a miss in my view, but regardless the V12 S wears its aged interior with grace and dignity. Worries on its age aren’t lingering ones, but worth a mention… or two. 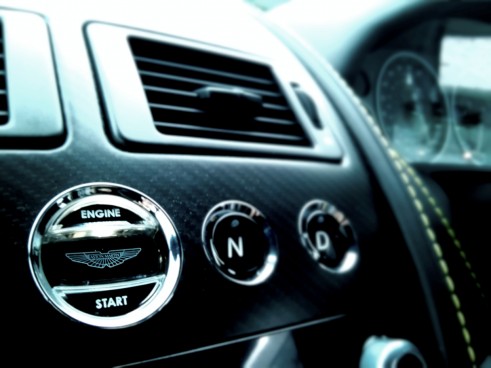 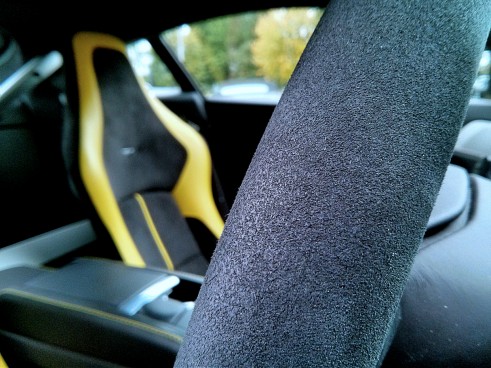 Interestingly some of these details such as the emotional control unit and the plaque denoting the model on the door sill, I feel, find themselves more at home than ever in an Aston when it is of limited and exclusive number. The whole aura of the car gives an impression of how an owner would feel stepping into their very own piece of AM history. Dynamically it is undoubtedly outclassed by contemporaries such as the hallowed Ferrari 458, but this can’t be the point with this car. It is as brilliant a machine as Aston wants it to be, all the while carrying over that intoxicating personality. 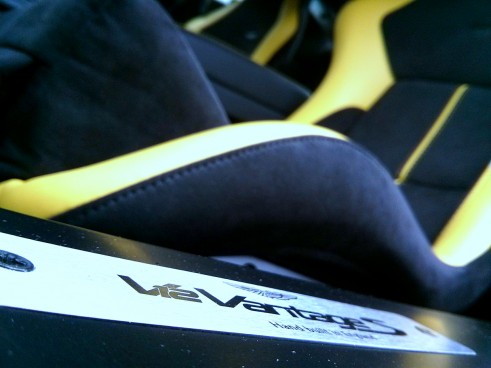 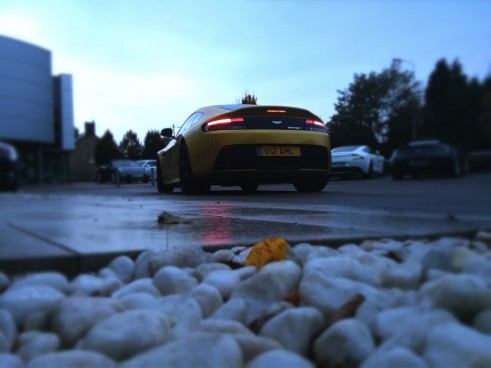 As I mentioned previously, you could be forgiven for seeing the V12S as somewhat an encore for this generation of Vantage, but upon closer inspection it is arguable that the Vantage has its best tracks saved for last, before it bows out. V12 is certainly not just a badge. The galactic force under the bonnet goes some way to insuring that, but what separates this from the standard V12V? The S will take your assumptions based on its garnish and cast them aside given the chance. It is a ten tenths road racer in ways the standard V12 would struggle to hold a candle to. This is a legitimate ‘fight club’ hardened super sports car and a 110% worthy flagship to the Vantage range.

I feel like it offers a completeness to the Aston ‘top of the line’ as well. The Rapide S is obviously a larger than life autobahn monster. The Vanquish is arguably the nipped and tucked handsome new face of Aston, and likely a good reference point for where they’ll take Vantage next. The V12 S though, as a legitimate identity, completes this trinity with a welcome pasting of the old school, hard arsed sports car ethos, never before personified by the Vantage so well.

I know theres talk of AMG engined Astons in future (I whined about it myself in a previous article) but I, and certainly Doctor Bez think they’re way off. The current range is holding face with outstanding class.