Having only ridden one other motorbike in my life, this was always going to be a hard review. It’s not as though I have the breadth of experience or a wealth of knowledge to delve into as I do in the car world. But taking it from a learner/newbie perspective I’ll give it my best shot.

So I passed my CBT thanks to Honda Motorcycles UK, they then emailed and asked if I’d like a loan of the other bike that was there the day I took my CBT, the fairly new Honda CB125R. 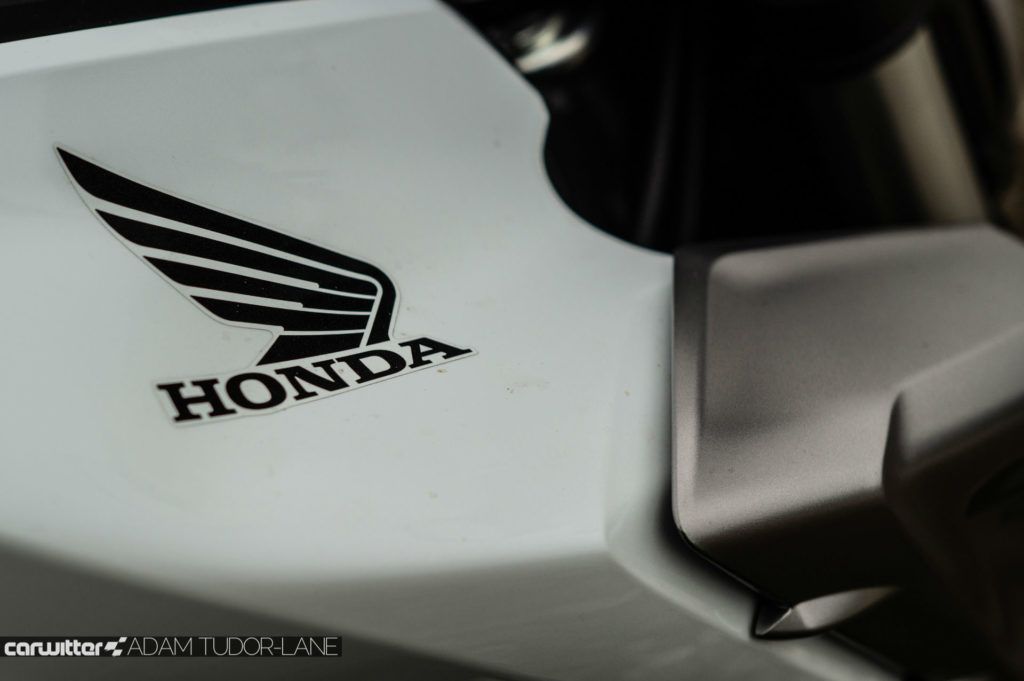 Now I had ridden it that day, but for all of 15 minutes around an incredibly small car park. But it’s a bigger, normal sized bike compared to my loveable little MSX125. That put me off.

It was dropped off via a van and wheeled onto my driveway, it would now be in my custody for the next three weeks. Switching it on for the first time I saw it had just 60 miles on the clock, why on earth were they trusting me, a rookie, with a brand new, unblemished bike?! No pressure. 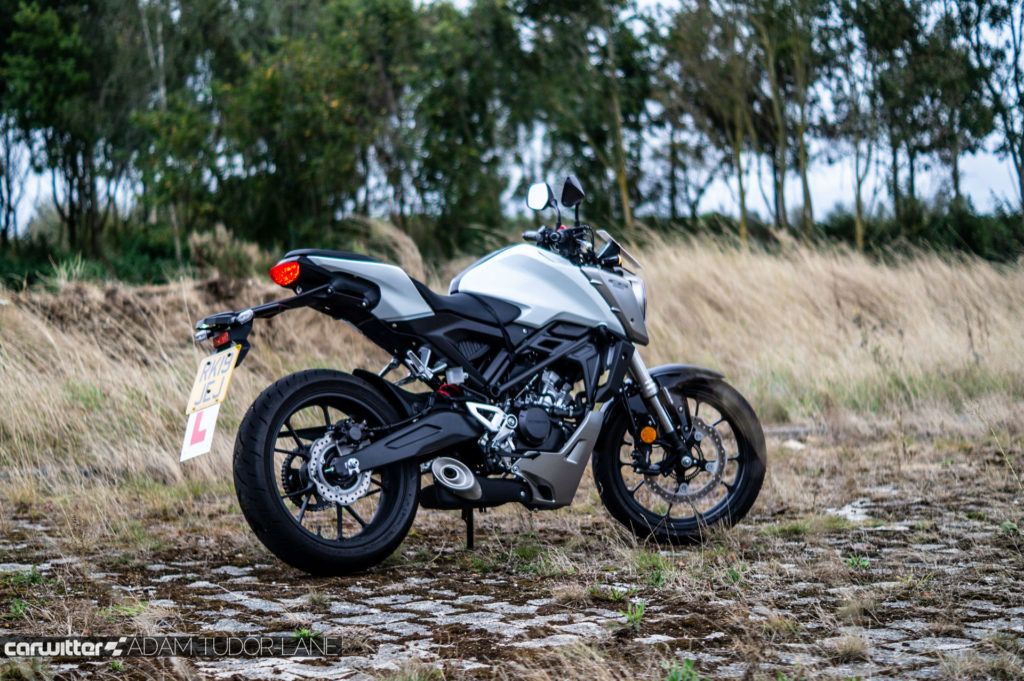 Comparing it to the MSX the CB125R is a heavier bike, but it’s not unwieldy. I feel that I could still grab and save it if it was to fall. That never happened in the whole time I had the bike BTW. Pro.

But you can definitely feel it’s increase in size when manoeuvring it, the dinky MSX you can almost lift into position. Trying that with the CB and you’d do yourself an injury.

Firing it up for the first time I headed out within an hour of delivery. I didn’t want it to become this big thing that I put off for fear of its size compared to what I was used to. 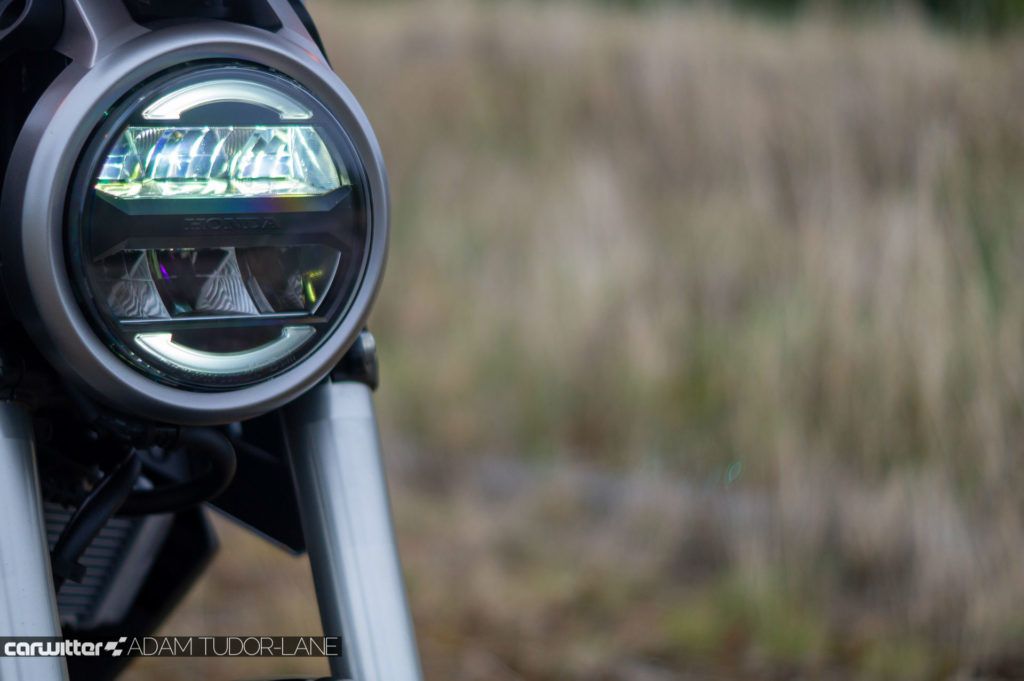 The first few hundred yards were a little shaky, it had been nearly a month since I last rode a bike and the total of my time on two wheels was still in single digits.

Heading down some country lanes I quickly got used to the 125R. As I thought on the day of my CBT the mechanical aesthetics of this and the MSX are identical. To all intents and purposes, it feels exactly the same.

The clutch has the same weight, the gears click and clack into place just the same and the throttle response is identical.

I stand by my original thoughts that the 125F feels like a far cheaper, inferior machine to either the MSX or CB. There’s a weight to the controls of both which feels solid, like you’re actually engaging with something big and mechanical.

You just don’t get that sense with the 125F. 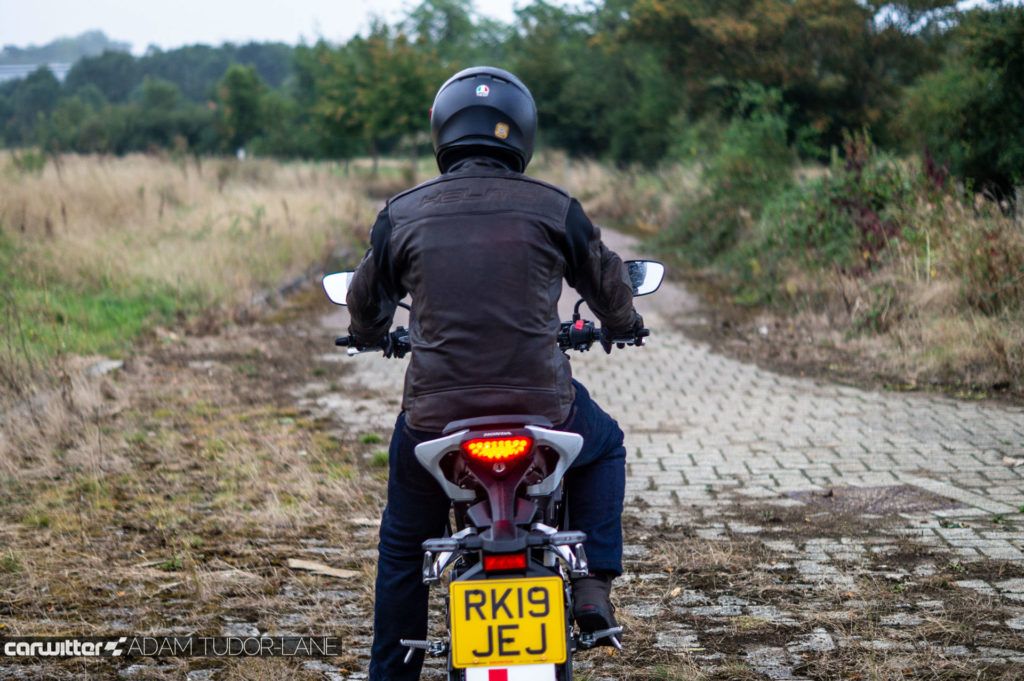 In terms of acceleration the CB picks up the same as the MSX, but at the top end it’s got a longer stride. You can hit a few MPH over 70 with ease.

Around town it was all I needed, over the course of 100 miles never once was I overtaken on either dual carriageways or country roads. This again reinforces my belief that you don’t need a big powerful bike at all. Well not for what I’m after anyway. 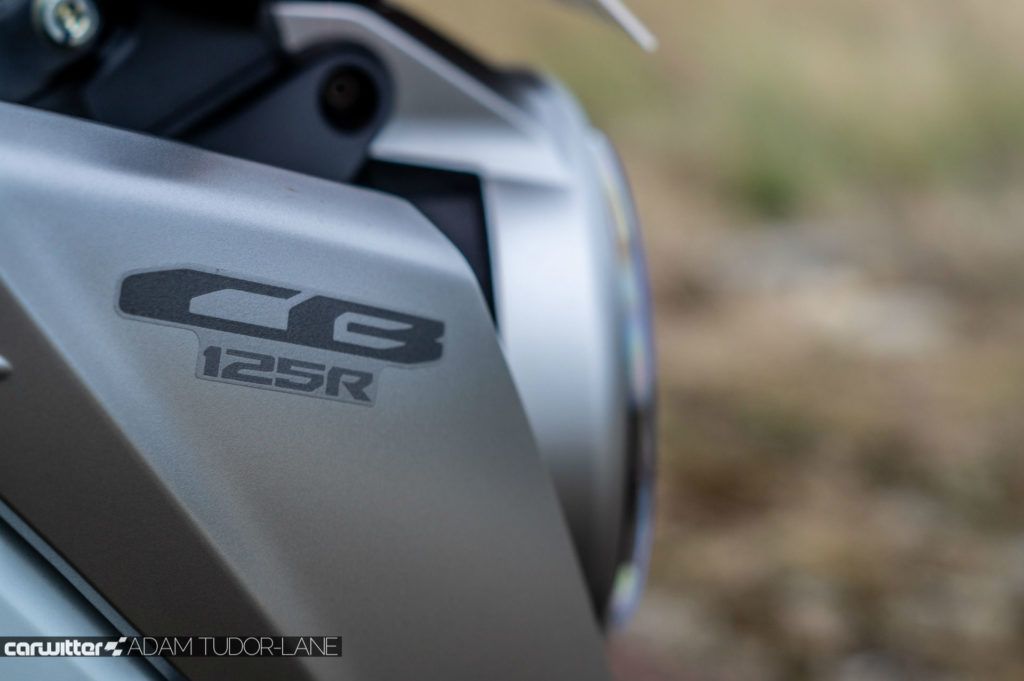 It doesn’t sound like a puny gutless 125 either, there’s a healthy roar from it which is surprising considering the standard exhaust. The MSX is far more muted by comparison.

That added weight took a little getting used to. I went and practised all the things I had covered on my CBT just to refresh myself. The turn in the road was particularly tricky, balancing the extra weight at low speed meant more than the occasional foot on the ground.

The extra heft was something I soon got used to though, leaning into corners felt far more satisfying on the CB125, you really have to shift your weight which you don’t need to do on the MSX. 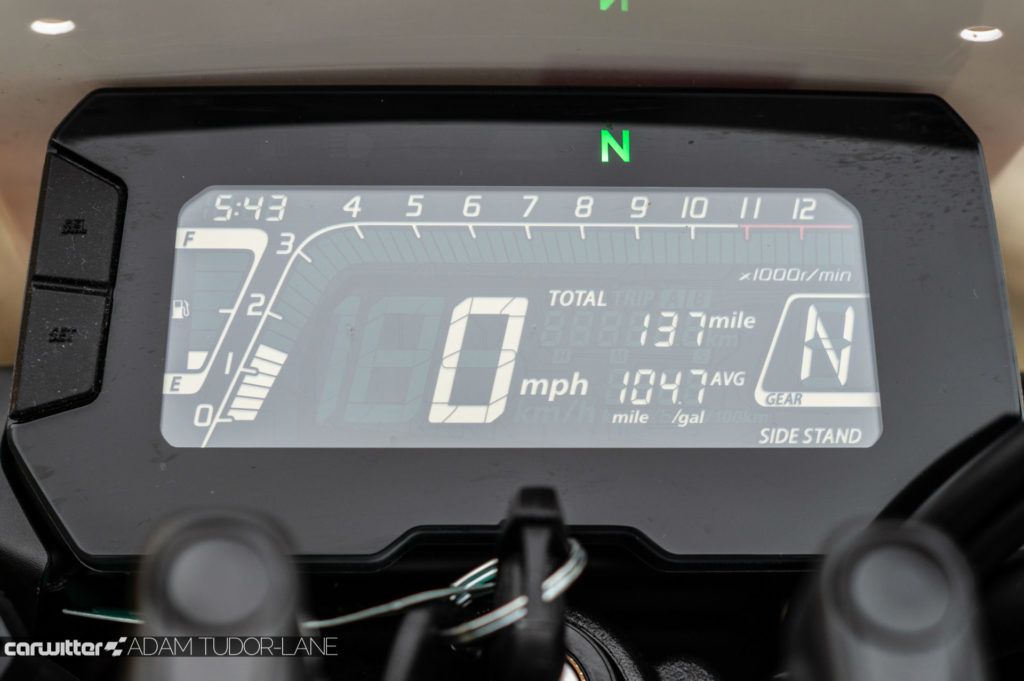 There’s an all-digital dash which enthusiastically says ‘lets ride’ when switched on, it’s gimmicky, but loveable at the same time.

Unlike most motorbikes you get a gear indicator, which is cheating somewhat. It’s nice to have, but does make you lazy. It’s not exactly hard to keep count of where you’re at in the gearbox.

In terms of the looks, I absolutely loved the CB125R. It blends old café racers with a modernity that just works so well.

The same awesome design is carried through to the rest of the R range, so you can bump up engine size to either a CB300R, CB650R or a monster CB1000R if you so desire. All look incredible.

LED lighting is standard all-round, which continues the modern theme. There’s also two channel ABS to look after you in wet and slippy conditions. 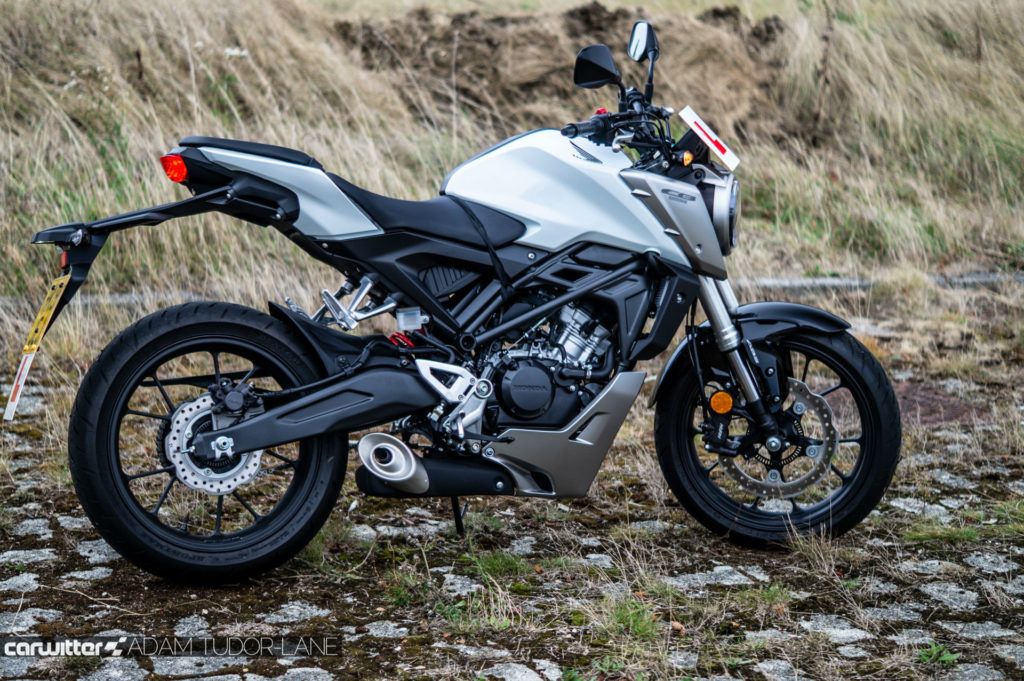 Power from the 124.7CC liquid cooled engine is rated at 13 HP and 10.4 Nm of torque at 8,000 RPM. You’ll hit 50 MPH in 11.4 seconds, which seems slow compared to anything car related, but on the open road it’s more than enough to keep you ahead of the traffic on short sections of road.

Kerb weight tips the scales at 126 KG, and the seat height is 816 mm, so perfect for a learner like myself. At 5ft 10 I could still get both feet flat on the floor. No tiptoeing here. 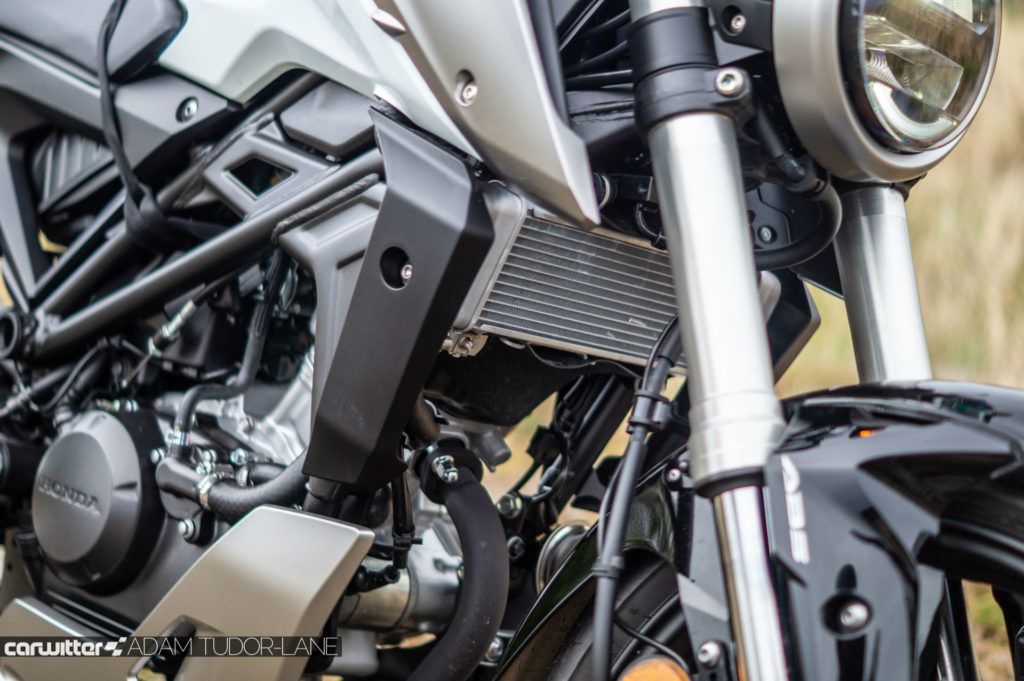 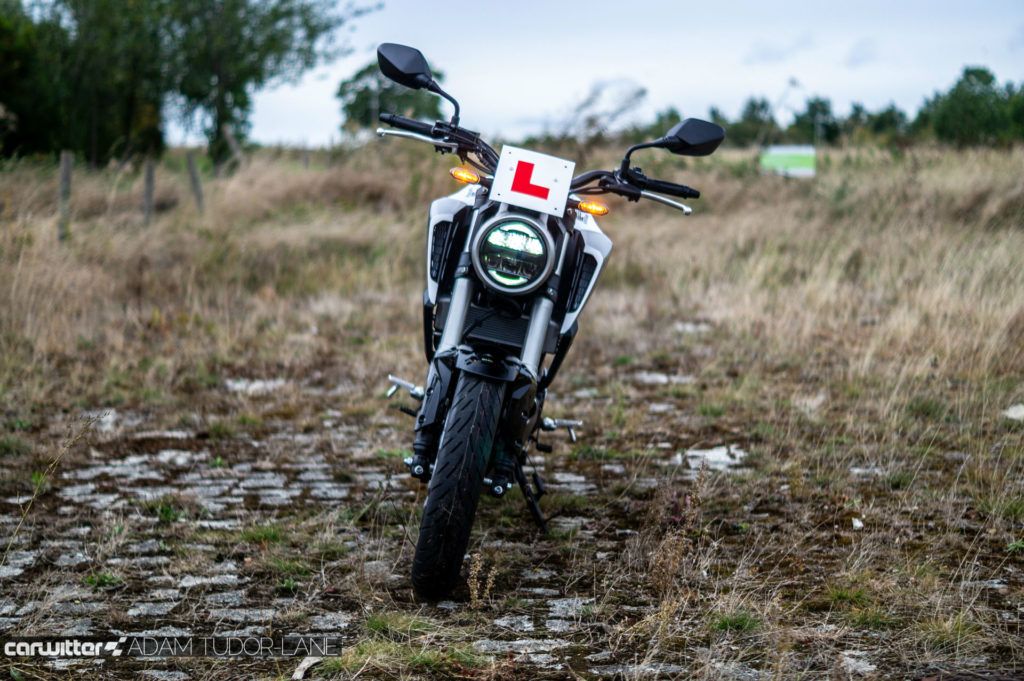 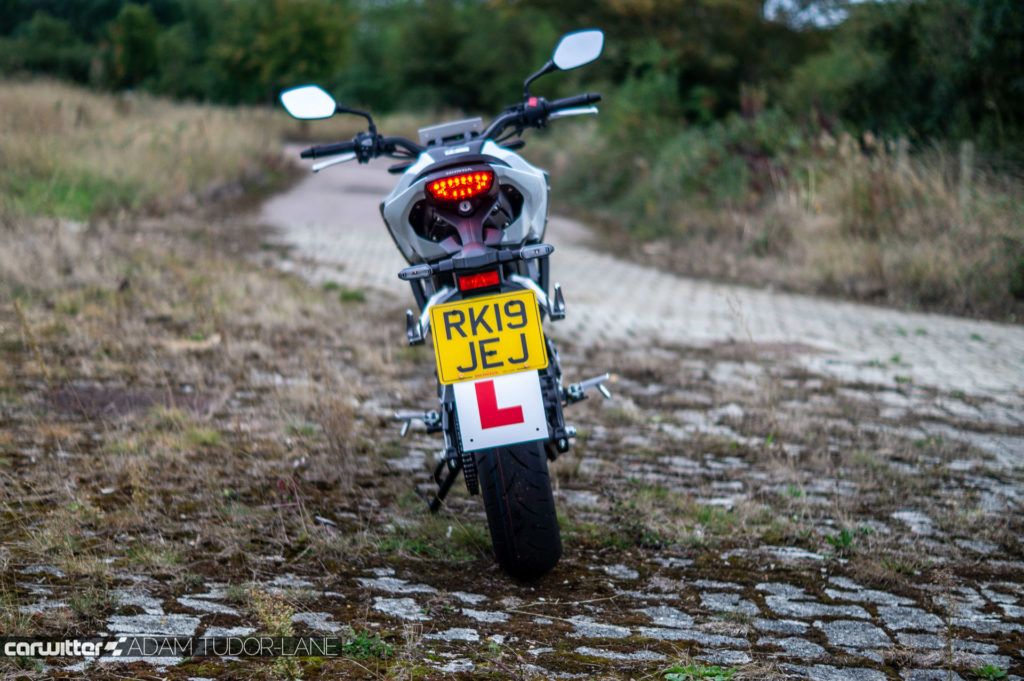 Over my 100 miles with the CB125R I really grew to love it. The controls are so familiar compared to the MSX it made riding it incredibly simple. The extra weight isn’t too unwieldy, but it’s probably toward the weight limit I’d like to ride. For me it’s all about the ‘chuckability’ the CB125R lacks some of that, but its nimbleness and top speed make up it.

You can buy the bike outright for just £109 a month with a £442 deposit. That’s at 6.9% APR over three years. Both options are available direct with Honda Finance. 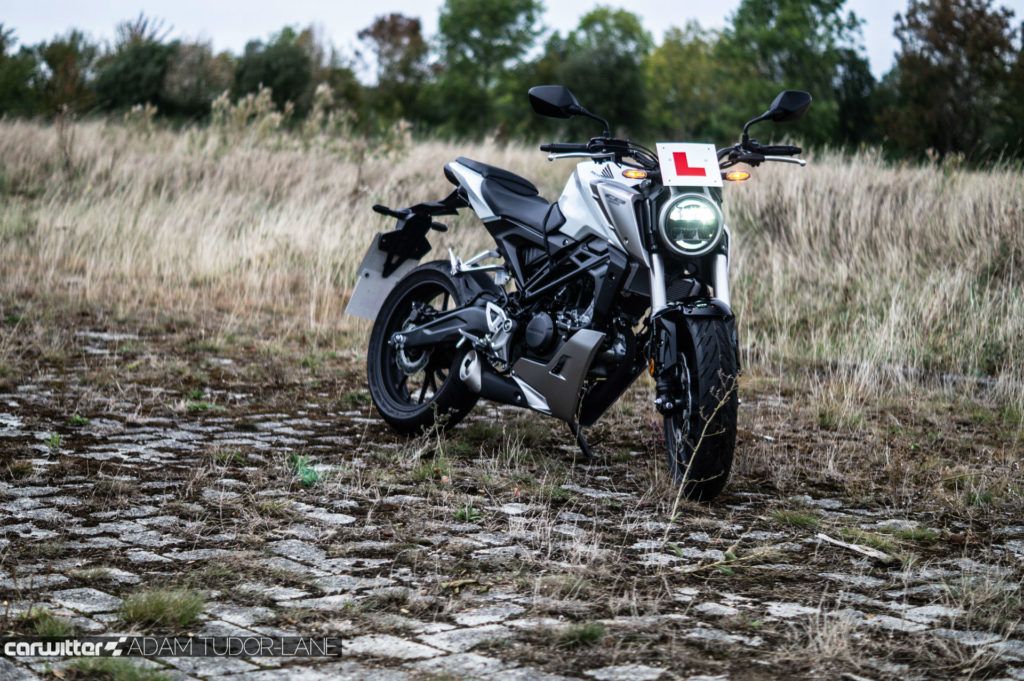 Clean Air Cars: Why Fuel Emission Tests Are So Important