TV ratings for Formula One have been dropping over the years. Vettel’s dominance since 2011 bored everyone but Red Bull fans and the recent regulation change to humming V6 power units is not helping. Plus Red Bull’s dominance has been replaced with Mercedes this year…

Germany, South America and Italy have seen the highest fall in ratings. Formula One management now appear to be bothered with these facts and are introducing ideas in hope to produce more of a “show”, however artificial the solution might be.

A failed attempt to make F1 interesting again involved Mercedes testing a “trumpet” exhaust at the in-season Barcelona test. High expectation but the decibels didn’t increase much at all, just a change of engine tone.

Once again another attempt has been made to make Formula One interesting. During Austrian practice, Nico Rosberg of Mercedes, and Kimi Raikkonen of Ferrari attached a titanium skid blocks underneath their cars to create sparks, something that’s not been since the early 90s where masses of sparks were created from super low clearance. 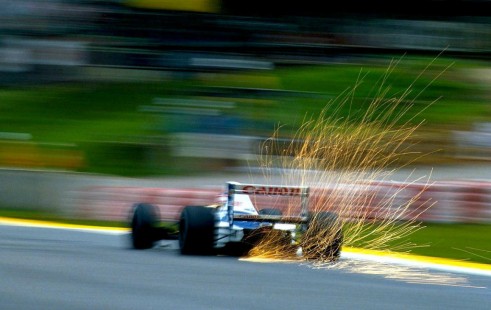 While some sparks came from the back on Rosberg’s car, yet again, it’s another idea that’s failed.

Fernando Alonso has expressed his thoughts on the current show that F1 is producing.

The show that we’ve put in this year is not good enough in some of the races.

Also, when one team is dominating so much as Mercedes, probably the spectators prefer some more action.

So what next for F1? A double exhaust seems to be the next idea that will be tested along with glowing brake discs and vapor trails.

All good and well but it’s definitely concerning how many artificial ideas are being considered and even tested. With most people complaining with the lack of noise, this will most likely take priority. Ecclestone still hasn’t got his way with ‘artificial rain’ i’m sure that one will come back around soon!