The BTCC season resumed after a break of 6 long weeks, petrol heads up and down the country were left breathing a collective sigh of relief as the lights turned green on Saturday for practice and qualifying. Anyone who had kept tabs on the break would have known that MG were expected to be quick after an excellent tyre test a few weeks ago at Snetterton, a test which Honda chose to sit out, preferring to take to the Norfolk track in their own time. Qualifying threw up few surprises with MG taking a 1-2 on the grid, Sam Tordoff taking the pole ahead of his more experienced team-mate Jason Plato. Then followed the Honda Civics of Gordon Shedden’s Dynamics Yuasa racing team, ahead of the Eurotech entered Pirtek machine of Andrew Jordan, Colin Turkington lined his BMW up in 5th. 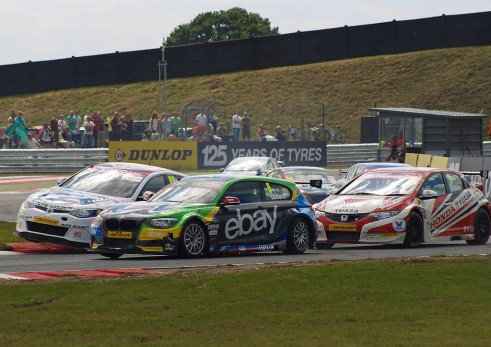 Series leader Matt Neal had a session to forget however – as did Motorbase Airwaves Racing’s Aron Smith, Neal qualifying a distant 11th while Smith had a huge shunt forcing him to miss a large chunk of the session. His earlier time being good enough for 6th on the grid seemed to gee up his mechanics who had the car ready for the grid, and the first race of the day.

Tordoff gets a great start leading away from team-mate Plato, with 2nd from Shedden and Turkington. Smith and Jordan fight over 5th, while further back Dan Welch’s Proton gets spun out by Rob Collard’s BMW at Agostini. Jordan wins the Battle for 5th and sets about chasing down Turkington, Shedden and the MG’s.

Lap 2 begins, and problems for the Rob Austin Racing Audi of Will Bratt, as his bonnet catches remove themselves, letting his bonnet slam into his windscreen. One slow lap to the pits later and he’s back out with a patched up gaffer taped Audi. There’s more action down the field with the injured (by an alleged shark attack) Rob Austin, the recovering from a poor qualifying Matt Neal, Rob Collard, Tom Onslow-Cole in the Passat, the Pirtek Civic of Jeff Smith and Speedworks Toyota’s Dave Newsham all battle for the lower points. 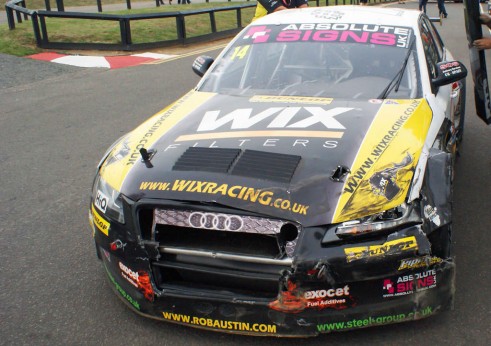 Gordan Shedden in 3rd is now the fastest man on the track, chasing down the MG’s ahead. Meanwhile team-mate Matt Neal has moved up to 8th position. Shedden continues to harass Plato, as the battle-scarred Audi of Bratt sensibly moves out-of-the-way to let the leaders through. A little further back Collard is now chasing down the Vauxhall Insignia of Jack Goff, having a great race for the final points position. Not far ahead of them Matt Jackson is putting a great move on championship leader Matt Neal for 8th place, sensible driving from both drivers gives each of them plenty of room to manoeuvre.

Back at the front Sam Tordoff takes an untroubled first BTCC victory from Plato with Shedden, Turkington, Jordan and Smith running out the top 6. Not the best race the BTCC has produced this season, lets hope races two and three make up for that.

Plato gets the better start this time and leads, but Turkington gets a flier from 4th and is 2nd by the Montreal hairpin ahead of Tordoff, Shedden, Jordan and the Motorbase pair of Smith and Jackson. Unfortunately their stable mate Liam Griffin beaches his Focus, bringing out the Safety Car at the start of Lap 2.

Lap 5 and racing resumes, Jordan and Shedden battle for 4th over the course of a few corners with Jordan eventually winning the encounter – unfairly as it would be later judged, he will receive a 6 place grid penalty at Knockhill. In the melee, Smith, Jackson and Neal all pass the Scotsman, more drama up front as Plato slows and Turkington inherits the lead. 2nd us the MG of Tordoff, Jordan in the Airwaves Ford and the Yuasa Honda’s. Will Bratt (wearing a spare Rob Austin liveried bonnet) has more bad luck as he gets punted out by Ollie Jackson’s Speedworks Toyota Avensis.

Lap 7 Jordan is the fastest man on track, and all over the back of the MG of Tordoff who is not too far off the leading BMW. A three-way fight for the lead ensues, but P2 is where the first change happens as Jordan brakes later than Tordoff, as Turkington takes a few moments to breathe again. Welcome back BTCC! 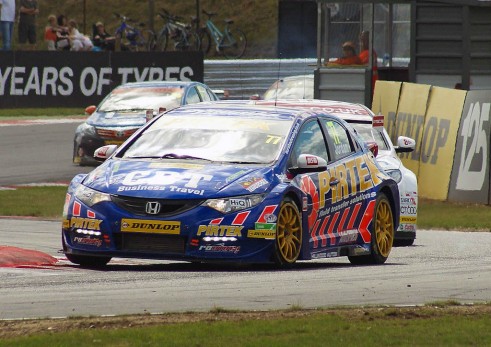 The Airwaves cars of Smith and Jackson having their best weekend of the season thus far join the podium battle, as they reel in Tordoff, but the next action comes from the Cicely racing Toyota of Adam Morgan, whose spin causes Jeff Smith’s Civic to hit the Audi of Rob Austin. Meanwhile the luckless Dave Newsham has nowhere to go and collides with the pair of them! Back towards the front Tordoffs MG has run out of tyres as he starts to drop down the order, and has to defend from the BMW of Collard. Collard’s team-mate though has a mirror full of Honda Civic, as Andrew Jordan pressures the former champion. The Motorbase cars, Civics, Tordoff and Collard follow in an 8 car train at the front – is this BTCC or the MOTO3 series??

It would take a brave person to bet on the podium outcome of this one, especially with 5 laps to go! 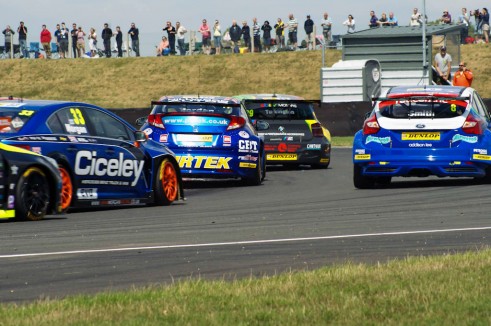 Turkington is driving the widest BMW – very defensive driving from the star of Croft, Jordan and Turkington collide, and the BMW driver drops down the order. While Collard and Tordoff have a collision of their own, with Collard spinning off. WSR go from hero to zero in the space of a few corners, Tordoff’s race gets even worse as his MG having used its tyres now, uses all its brakes, a weekend that many had predicted would be a dream for the Triple 8 run squad is turning into a nightmare!

In the excitement Matt Neal finds himself fighting for the 2nd step of the podium with Aron Smith. A good clean fight between the tow sees the multiple champion secure a Honda 1-2 behind Andrew Jordan with Smith, Jackson – the recovering Adam Morgan, Turkington, Shedden, Newsham, Tom Onlslow-Cole and the bright orange Dynojet Toyota of Frank Wrathall taking the final point; in a race that had enough action for an entire touring car event! Race 3 will have to be epic to top that…

The reverse grid was drawn by the first ever BTCC champion, Jack Sears. It saw Dave Newsham line up on the pole, ahead of Shedden, Turkington and the rest. Plato starts at the back, following his race 2 retirement and will be looking to get into the points. Remember that the MG was quick here at the official test day, and will have no weight penalty due to his previous retirement. Lights out and Newsham gets a terrible start, dropping to 6th and colliding with Neal, putting Newsham out and Neal to the back. There was a bigger incident behind as the pack brake hard for the Newsham / Neal incident. Plato goes off into the barrier and barrel rolls across the grass. The MG teams weekend goes from bad to worse! Safety Car deployed and rightly so as the Doctor (no not Peter Capaldi) attends to Plato, who thankfully – is OK.

Turkington leads Shedden, Jackson, Smith, Morgan and Rob Austin, as the race restarts on Lap 5. The action continues behind as Ollie Jackson and Will Bratt (again) get together, this time joined by Dan Welch who picks up a puncture for his trouble. Shedden and Turkington battle for the lead, Jackson sitting just behind decides whether or not to join in, or watch and wait. It doesn’t take him long to make his mind up as soon its a 3 way fight for the lead, more contact! 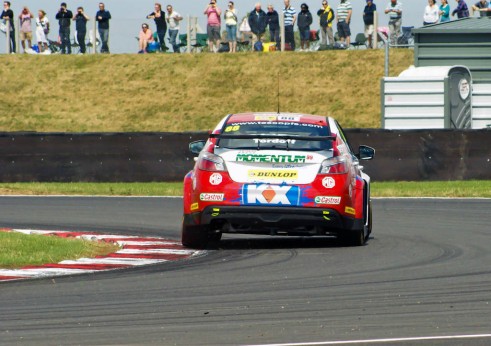 Shedden turns Turkington around for the lead at Agostini, funnily enough Shedden escapes punishment for this move and doesn’t even get a slap on the wrist! Jackson goes through to 2nd while Turkington drops down the order. The battle for third heats up as Aron Smith defends hard from Morgan and Andrew Jordan. Tordoff, and the improving cars of Turkington and Matt Neal follow, battling for vital championship points. The lightweight MG of Tordoff tries to give the team a little more to shout about this weekend, as he pressurises the heavily ballasted Jordan in the closing stages. Jordan has to give way to the MG and BMW of Turkington, as Aron Smith defends hard from the Toyota of Morgan for the final podium place. Tordoff who seems to have found a new lease of life has got onto the back of the Morgan / Smith battle and attempts a move on the Toyota, with Turkington and Jordan chasing the pair. At the flag however, Shedden takes victory from Matt Jackson with Aron Smith taking a fine 3rd and making it a double podium for the airwaves team. Morgan, Tordoff, Turkington, Jordan, Neal, Collard and Nick Foster round out the points. 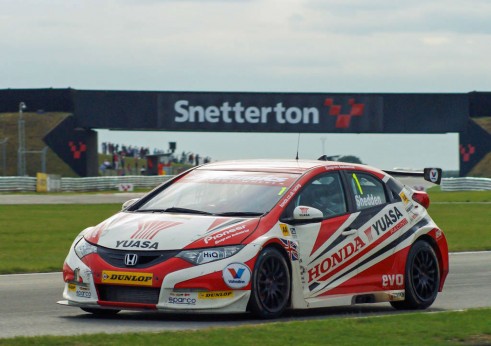 So plenty of action, lots of incidents, clean and not so clean racing. A very close championship table sees Matt Neal still at the top, but by only 9 points from Andrew Jordan, Shedden and Turkington follow in 3rd and 4th with Jason Plato 50 points down in 5th place.

Many thought Snetterton would be an MG benefit meeting, but while Thruxton seemed to be a Honda track, and Croft a BMW circuit; it would have seemed that the car to have at Snetterton was a Ford Focus!

The BTCC once again throws some unexpected results into the mix, i can’t wait to see what happens in Scotland!

This video makes us want a Honda NSX