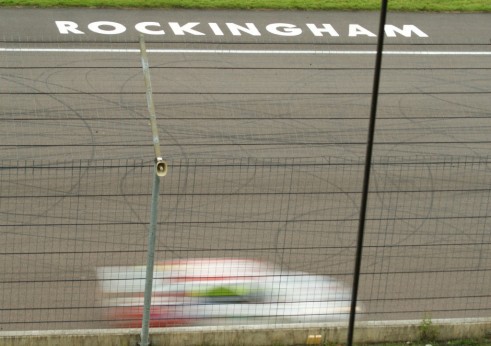 The BTCC circus moved on to Rockingham this weekend, where Matt Neal would be hoping to do what he failed to do one year previous – leave the circuit maintaining his championship lead. Team mate and reigning champion Gordon Shedden, 2nd place Andrew Jordan and West Surrey Racing’s “new threat” Colin Turkington would all be doing their utmost to make sure that didn’t happen. The biggest news of the weekend was that of a new face in the Motorbase Airwaves Focus, as Tom Onslow-Cole had signed to join for the remains of the season.

Qualifying threw up a few surprises with the Triple 8 MG’s of Jason Plato and Sam Tordoff locking out the front row ahead of “fan favourite” Rob Austin in the distinctive Yellow Audi A4. The heavy hitters started to line up next with Andrew Jordan’s Pirtek Honda Civic, ahead of the Similar Yuasa Racing car of reigning champion Gordon Shedden. The respective team mates would fill the next few spots on the grid with Jeff Smith returning after missing the Scottish round, just ahead of the ballast-heavy-series-leader Matt Neal in 7th.

There would be one final gamble for the teams to consider on Sunday morning as rain fell prior to the opening round.
“We’re not the best weather predictors” – Jason Plato told the TV crew on the grid referring to the wrong decisions made at Croft.
“We’ve just bolted a set of wets on…” Rob Austin informed the media when asked of his preparations for a wet starting race.
So as the grid girls leave the grid – trying not to get their stiletto heels caught in the now soft grass on the apron between the race track and pit lane it is reported that every driver is on the wet tyres, although Lea Wood enters the pits after the warm up lap for slicks. 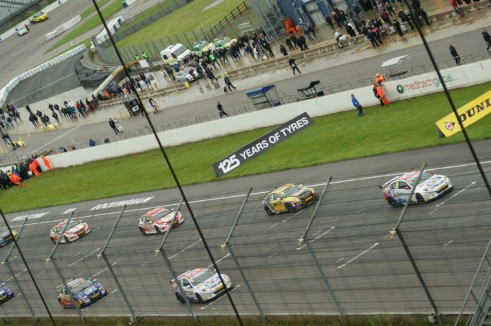 Lights out, and we are racing! Jordan gets a jump on the MG’s to lead at the hairpin, while Shedden slots into third behind Jason Plato with the second MG of Tordoff in 4th, whilst Honda team-mate Neal is 5th. Big crash at Graceland, as Adam Morgan’s Toyota is collected by the Audi of Will Bratt after the latter appears to touch a BMW. In the immediate aftermath the Proton of Dan Welch collides with Airwaves racing’s new boy Tom Onslow-Cole as the two drivers attempt to avoid the incident. Welches Proton – stranded on the circuit – is then hit by the Chevrolet Cruze of Andy Neate ending both drivers days early! Onslow-cole manages to limp back to the pits but a damaged brake line puts him out of this round. 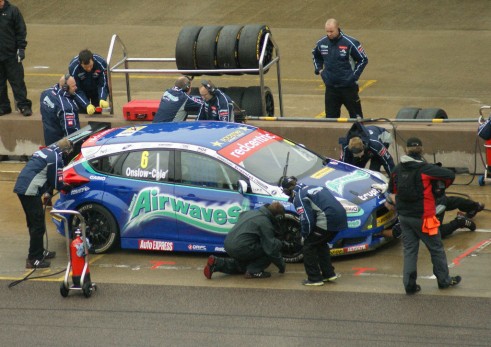 As expected the safety car is out with the order Jordan, Plato, Shedden, Tordoff, Neal and Matt Jackson in the Airwaves Focus getting a great start to end lap 1 in sixth. Drama! 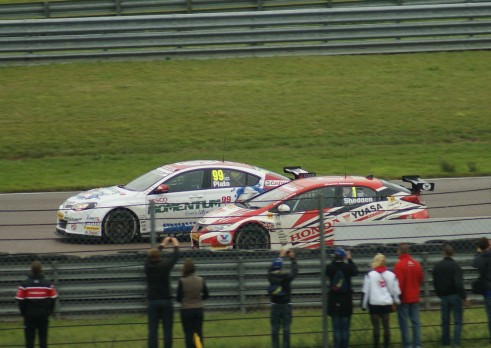 As the safety car enters pit lane and racing gets set to resume Matt Neal looses control at the chicane. Stranded until the rest of the pack have past him, he re joins the race at the back – and out of the points. No such dramas for the leader though, Jordan sets about puling out a small gap while Shedden battles with Plato for 2nd spot, Matt Jackson who has passed Tordoff for 4th joins the fight for podium honours.

Further back Tordoff is now dropping back, the MG’s don’t like these conditions as Rob Austin – recovering from an awful first lap and Rob Collard in the Ebay BMW both pass the former Porsche racer. Lap 10 and Jackson gets passed by Plato at the hairpin, and sets about chasing down Shedden who has broken clear of the MG. A little further back the rear wheel drive cars of Austin and Collard are beginning to come into play, as they close in on Dave Newsham’s Speedworks Toyota Avensis and the Matt Jackson / Jason Plato battle just ahead.

Austin and Collard both dispense of the Toyota on the same lap, while up ahead Jackson catches and passes Shedden for 2nd. Jackson is setting record sectors, but are there enough laps for him to catch the Honda of Jordan, who has been pretty much untroubled at the front?
The battle for points continues up and down the field with the Ebay BMWs of Collard and Turkington – having one of his quieter races battling for 6th, Jack Goff in the Team HARD Insignia taking a career best 9th, and Austin getting the better of Plato for 4th proving that Knockhill was no one off! 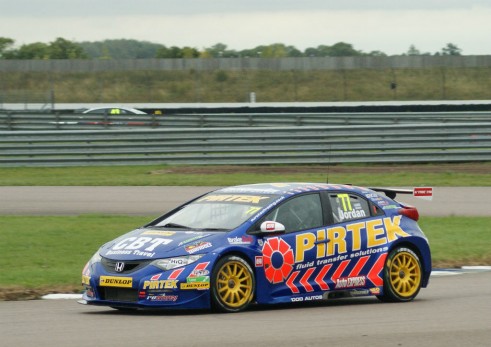 Final lap, and Jordan takes a reasonably easy, and unchallenged victory. The fast Ford of Jackson claiming 2nd – would be interesting to see what the fight would have been like if Jackson wasn’t fighting through traffic earlier in the race! The podium was rounded out in spectacular fashion as Rob Austin took Gordon Shedden on the final corner for a well deserved 3rd place, the rear wheel drive car being kinder to its diminishing wet tyres in the closing stages than the front wheel drive cars.

Plato would finish 5th from the BMWs of Turkington and Collard with Newsham, Goff and Frank Wrathall’s Dynojet Toyota Avensis claiming 10th.

Speaking of last lap drama, the Jack Sears Trophy race would also go the distance with Lea Wood’s gamble paying off as he passed the Focus of Dave Nye for the class victory. Matt Neal salvaged 14th place come the finish, but in doing so loses the lead in the championship – Andrew Jordan now leads for the first time since the first weekend of the season!

Drier conditions for race 2 of the day, which sees the grid line up in the order they finished race 1 – well in theory anyway. A few empty spaces towards the back as the unfortunates from the race 1 incident fail to ready their cars for round 23.
Green light and a great start this time for Rob Austin. who sails past the Focus and Civic ahead of him and into the lead! As the pack bunches up through the hairpin first time round, Nick Foster is forced to take his Ebay BMW across the grass, but re joins further back. Jordan in the ballast heavy Civic is being hounded, Shedden and Newsham are past the series leader, whilst Collard, Turkington and Neal are not far behind. 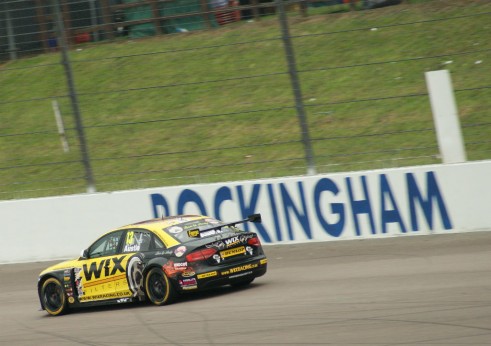 Shedden takes Jackson for 2nd place and sets off to try and catch the Audi at the front, Newsham also has a go at the Ford, while further back Matt Neal passes Turkington and sets about chasing down Andrew Jordan. Neal passes Jordan a lap or two later and Turkington – also chasing the championship – passes the heavy Civic on the same lap, and joins a train of cars fronted by the Focus of Matt Jackson, Newsham just behind the Ford though is coming under pressure from the BMW pair and Matt Neal. The three of them make light work of the Toyota, while Jordan further back has fallen behind the MG of Tordoff with Plato not far behind. 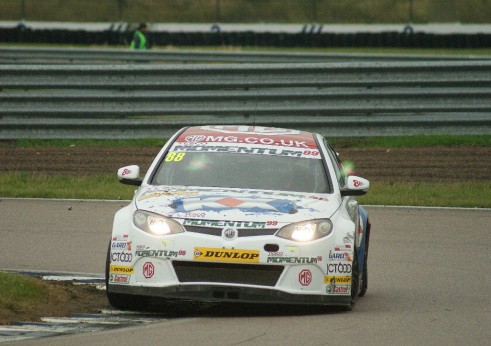 Plato makes a move at the hairpin, but the two are nearly taken out by an errant Howard Fuller in another Team HARD Insignia – the Vauxhall driver quite spectacularly missing his braking point. Lap 10, Collard and Neal both go off at the hairpin, Neal pulls off and into retirement for only the second time this season, while Collard makes it back into the track but is forced out with a puncture. Bizarrely both drivers seemed to go off on their own without contact with each other, promoting the battling MGs and Newsham up the order but more importantly Andrew Jordan.

Things are easing off a bit now in the closing stages, but Plato passes Newsham for sixth a little further ahead, Turkington takes Jackson for the final podium place.

Rob Austin though takes a brilliant, well deserved and well appreciated victory, the popular “character” in the BTCC paddock has had his fair share of bad luck this season, and now following a great Scottish round with 3 (after Turkingtons exclusion from the 3rd race at Knockhill) podiums and a first BTCC victory. 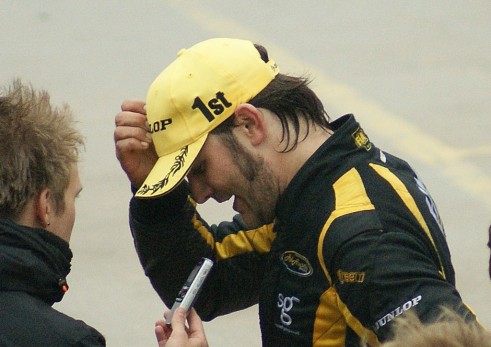 Shedden and Turkington completed the podium with Jackson, Tordoff, Plato, Newsham, Jordan, Tom Onslow-Cole and Jeff Smith rounding out the top 10. Neals non finish means that Jordan now leads the championship by 19 points over Gordon Shedden, with Neal a further 2 points adrift.
And who gets the pole position in the reverse grid for race 3?
Andrew Jordan.

Jordan gets a great start and leads the pack away, Turkington also gets a fantastic start moving up to 2nd from 6th on the grid…briefly before being passed by the MG of Tordoff. The safety car is out however, due to another big crash this time involving the BMW of Collard and the Insignia of Goff who manages to make it back to the pits minus a wheel. The newly repaired Adam Morgan was forced to take to the grass to avoid the incident, but continues albeit way down the order. Positions behind the safety car are Jordan, Tordoff, Turkington, Plato, Newsham, Jackson. 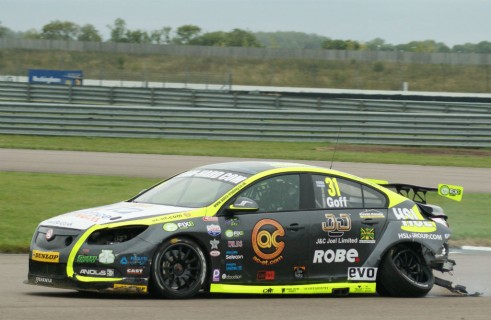 Lap 5 and we are racing again at Rockingham, Jackson passes Newsham and sets about chasing Plato. Austin tries the same move but ends up loosing to both Newsham and Shedden, further ahead Plato is gaining on Turkington. Shedden moves ahead of Newsham for 6th.

Light contact at the hairpin between Plato and Turkington allows Jackson to get right into the mix. Turkington gets a little breathing space as he chases Plato’s MG team mate up ahead. Further back Austin is ahead of Newsham, who now has Onslow-Cole right behind him.

Lap 11 and Turkington passes Tordoff for second place, followed almost immediately by his team mate – cynics may think a message something like “Sam, Jason is faster than you” was relayed to the young driver! Meanwhile Matt Neal (remember him) is up into 10th place. Tordoff drops further back as Jackson and Shedden both pass him on the same lap. 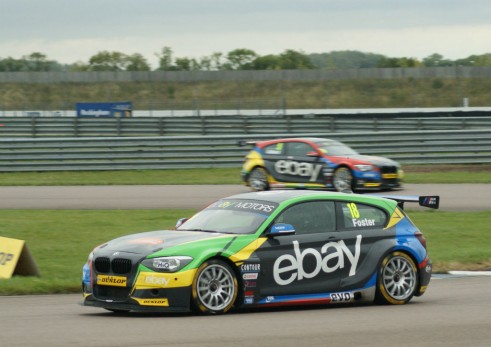 More panel bashing further back as Jeff Smih and Tom Onslow-Cole get tangled up, Smith continuing, Onslow-Cole rejoining behind the Honda, and with Adam Morgan’s Toyota behind him hoping to salvage something from what has been a horrible weekend by his standards!

Final lap now,  Austin and Newsham get together but both continue. Plato passes Turkington at the hairpin, only for the BMW driver to get a better drive out and re take the position. But at the flag Andrew Jordan seals a 2nd victory of the day from the battle of Turkington and Plato, Jackson finishes 4th with Shedden, Tordoff, Neal, Newsham, Austin and Jeff Smith rounding out the top 10.

Lea Wood took the final Jack Sears win of the day, and in doing so sealed his victory in this part of the championship.

Andrew Jordan leaves Rockingham as Gordon Shedden did 12 months earlier, leading the championship having snatched it from Matt Neal. Jordan this time leads Shedden by a healthy 30 point margin with Turkington a further 3, and Neal 4 behind respectively. 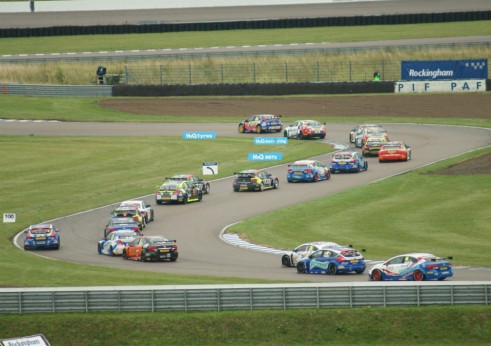 The championship moves to Silverstone in a couple of weeks time. This is turning into one hell of a title fight. BTCC we love it.