Mixed weather greeted the Easter crowds at Donington park for the second instalment of the 2017 BTCC season.

Qualifying, as it had done two weeks prior at Brands Hatch threw up a few surprises.

Ash Sutton initially set the fastest time in the improved Adrian Flux Insurance Subaru Levorg but, was relegated to the rear of the grid for race 1 following a boost infringement. Following him to the back of the grid was the TAG VW CC of Jake Hill, an illegal rear wing his crime. 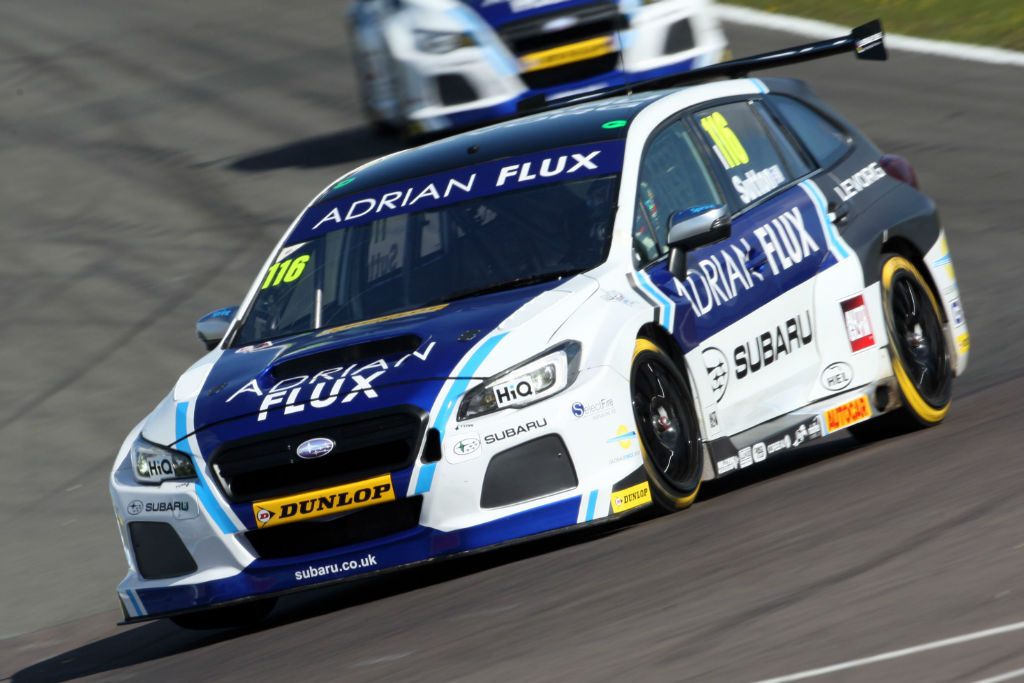 This promoted Rob Austin in the Handy Motorsport Toyota Avensis to pole ahead of Jack Goff in the Eurotech Honda Civic.

The Speedworks Avensis Tom Ingram was up next with Aiden Moffat’s Laser Tools Mercedes a Class 4th. The works Dynamic Halfords Yuasa Honda Civic Type Rs of Matt Neal and Gordon Shedden filled the next row ahead of Michael Epp’s TAG VW, Adam Morgan in the Wix Racing MAC Tools Mercedes, Jeff Smith – splitting duties between Donington and Oulton Park made it 4 Hondas in the top ten with his Eurotech machine ninth ahead of Colin Turkington’s BMW 1M. 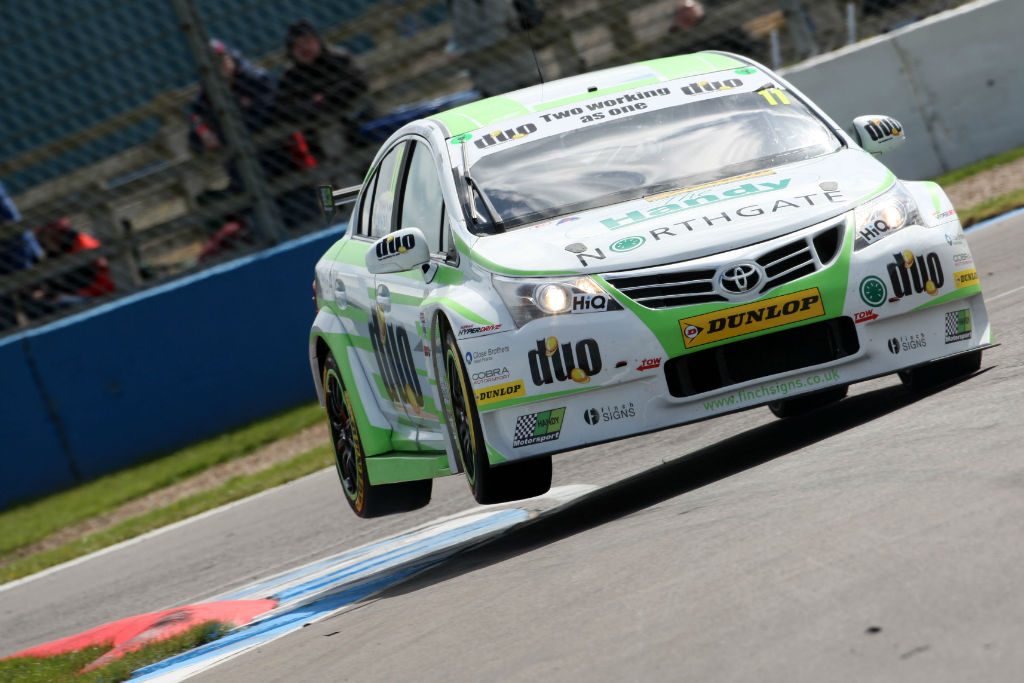 Incident from the word go as Ingram got nerfed into the first corner, with it pitching pole man Austin wide and back a few places in the opening corners, Goff would also have a moment and drop down the order during the opening carnage. 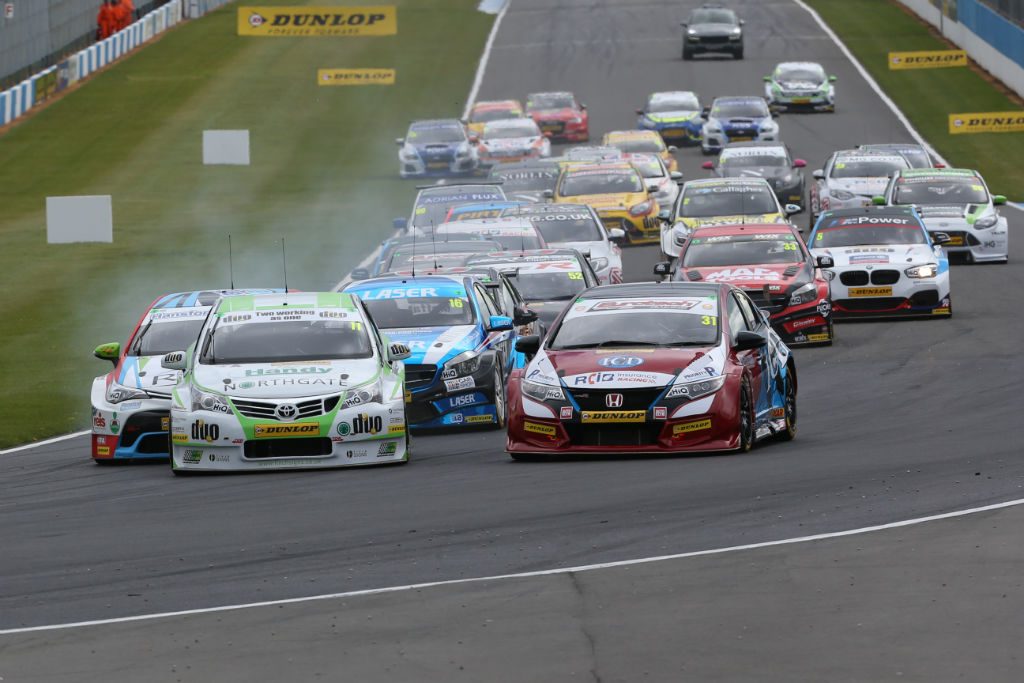 At the front Ingram was being reeled in the by the chasing pack with Moffat taking the lead on the 5th lap. Ingram, struggling with weight and the harder tyre option eventually dropped to 5th at the flag.

A flag that Moffat took for the first time in his BTCC career ahead of Neal, Austin, Tukington, Ingram, Rob Collard in his WSR Works BMW, Morgan, Shedden, Jeff Smith and Josh Cook in the Maximun Motorsport Ford Focus, however Morgan and Shedden would have their positions reversed as Morgan had passed the reigning champion on the grass rather than the tarmac! 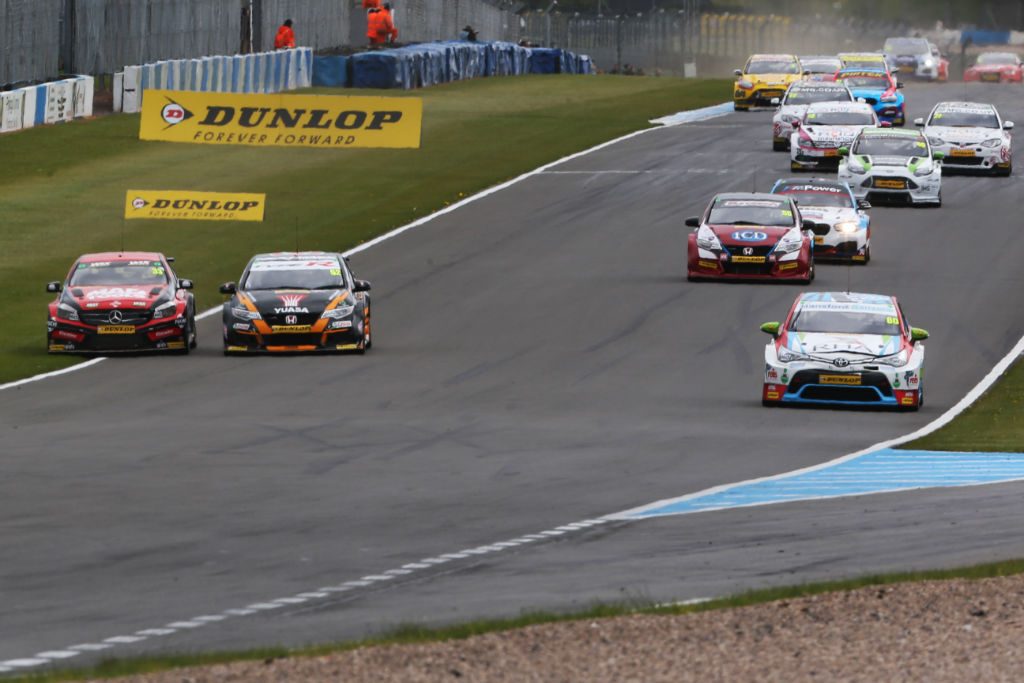 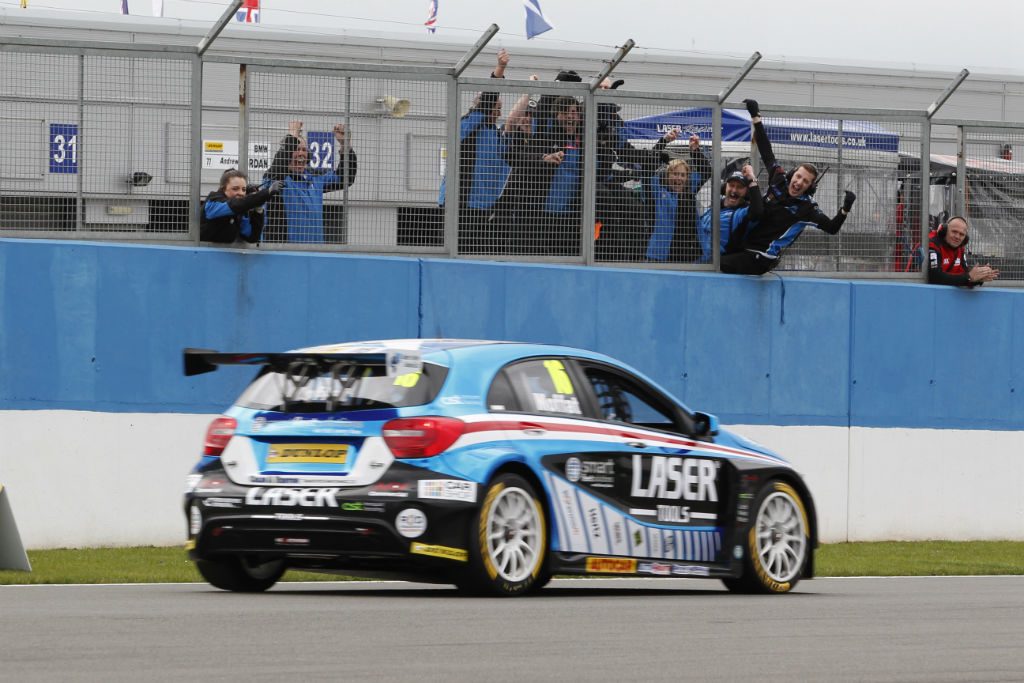 Moffat led away in the heavy and hard-tyred Mercedes in the early laps before being reeled in by Ingram and the BMW pair of Turkington and Collard.

Behind all this Sutton, looking to kick start his weekend after qualifying disappointment was up to 5th which, would become 3rd at the flag as Moffat dropped back as the race progressed. 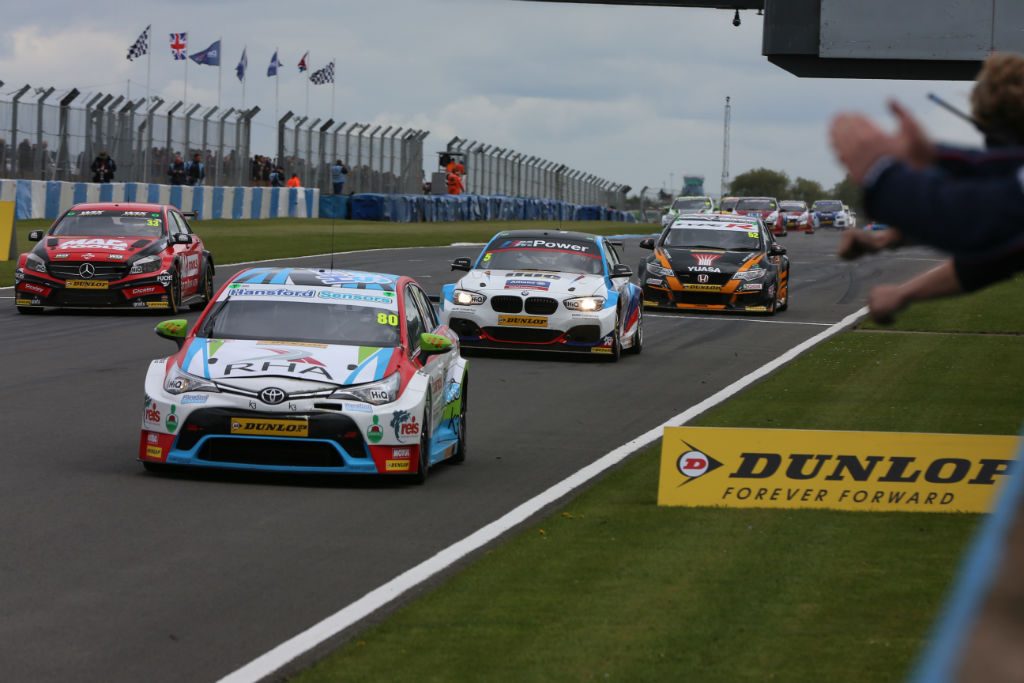 Ingram however took victory for the second time in 2017 and in doing so became the first driver in 5 races to record a second victory. Collard held off Sutton at the flag for 2nd while Cook took a fine 4th for Maximum ahead of Turkington and the works Honda duo of Shedden and Neal. 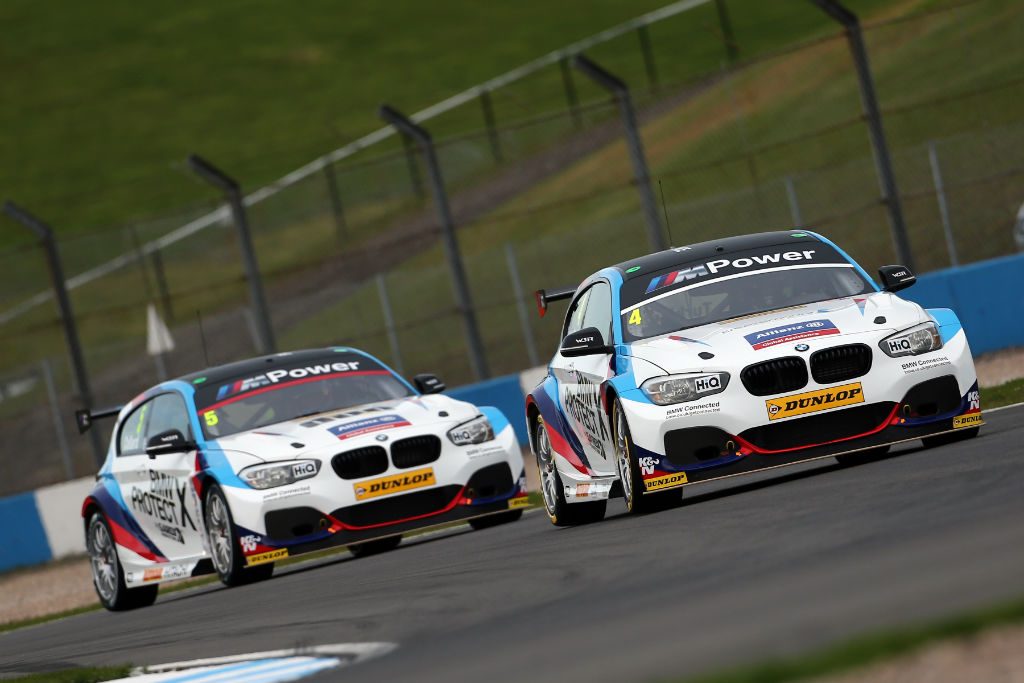 Dave Newsham in the BTC Norlin Racing Chevrolet Cruze – a car he knows well from his Power Maxed days took 8th and, with it the pole for the final reverse grid round ahead of Jack Goff and the current Power Maxed squad, Tom Chilton taking 10th in his Vauxhall Astra.

Heavy rain saw the entire grid on the wet tyre as conditions on a British Bank Holiday weekend took a turn for the predictable.

Incidents on the first lap saw many cars off at The Old Hairpin bringing out the safety car before Neal, leading beached his Civic as the red flags came out. Neal would be the only driver not to make it back to the grid for the restart once conditions improved. 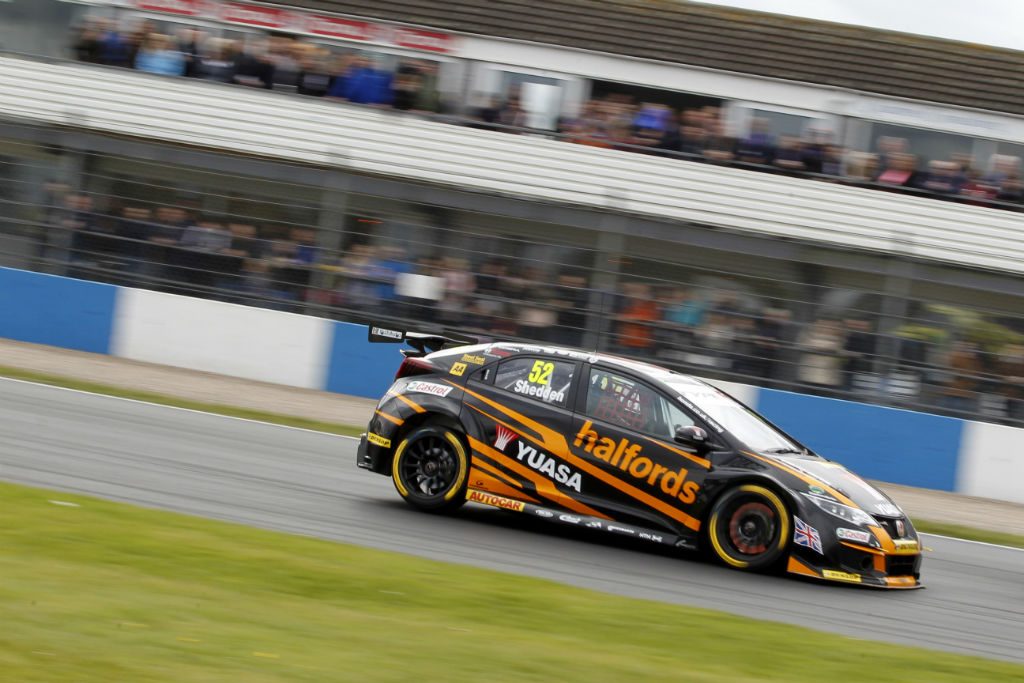 Newsham this time led away as the BMWs and Shedden looked to ruin the party. Shedden passing the Chevrolet on the 5th lap after a short safety car intervention, while Turkington followed on lap 8 leaving Newsham to battle hard in the closing stages with Morgan and Sutton for the final podium and outright independent victory. 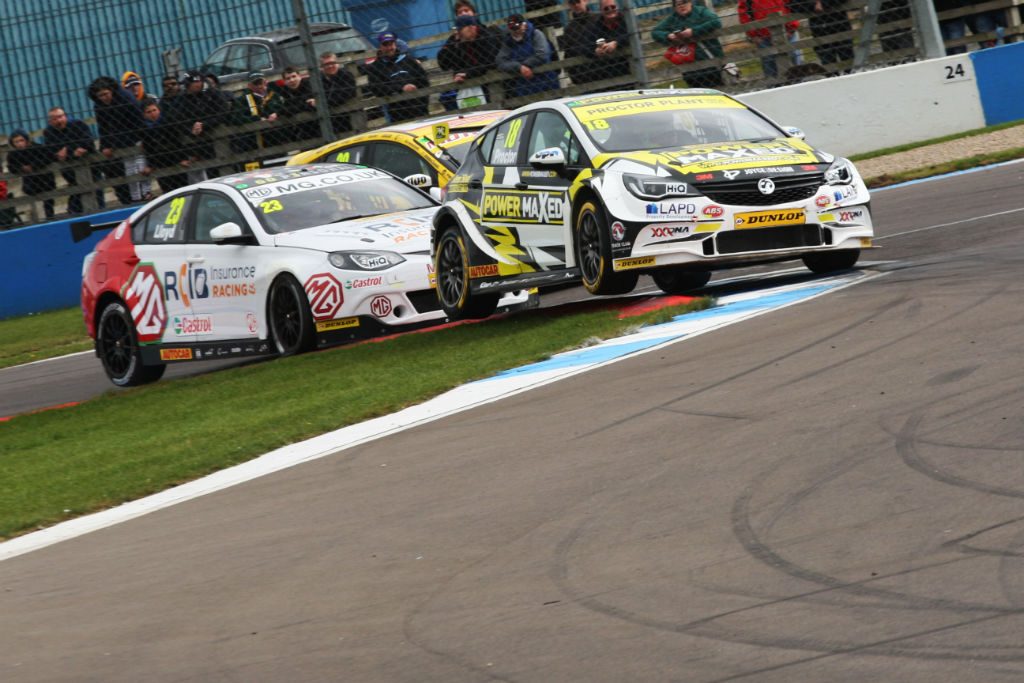 Morgan however won both battles taking the flag third ahead of the Subaru and Chevrolet respectively. Ingram was up next 6th past the post and scoring a hat trick of top ten finishes, ahead of Jack Goff, Josh Cook, Aiden Moffat and Aron Taylor-Smith in the RCIB MG6.

However, after the race Shedden’s car would be disqualified for a ride height infringement, handing victory to Turkington, promoting everybody else up a place and Senna Proctor in the Power Maxed Racing Vauxhall Astra into 10th.
As a result Shedden, who would have a comfortable lead after two rounds now sits 4th equal with Rob Collard. Tom Ingram leads the championship heading to Thruxton ahead of Colin Turkington and Adam Morgan. 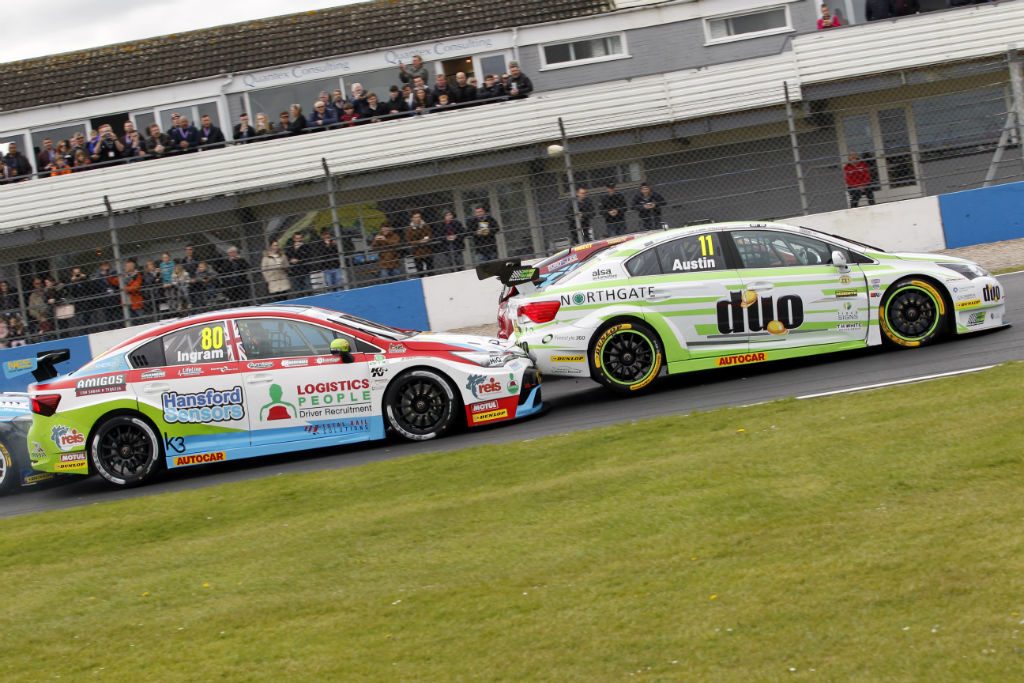 However, the atmosphere of the meeting turned early on in the day following a horrendous accident in the F4 race, which saw Billy Monger airlifted to hospital following a horrific incident with Patrik Pasma early in the contest.

Proceedings were held up for over 90 mins as rescue teams worked to free Billy from his car before transporting him to hospital with leg injuries.

The thoughts of all at Carwitter are with Billy and his family and we wish him a full and speedy recovery.