Finally, the BTCC season kicked off at Brands Hatch with action a plenty on the indy configuration.

The new season would also see an influx of new car and driver combinations, most notably the “works” Vauxhall Astras, run by Power Maxed Racing, with BTCC returnee and WTCC challenger Tom Chilton and Clio Cup Graduate Senna Proctor behind the wheels. 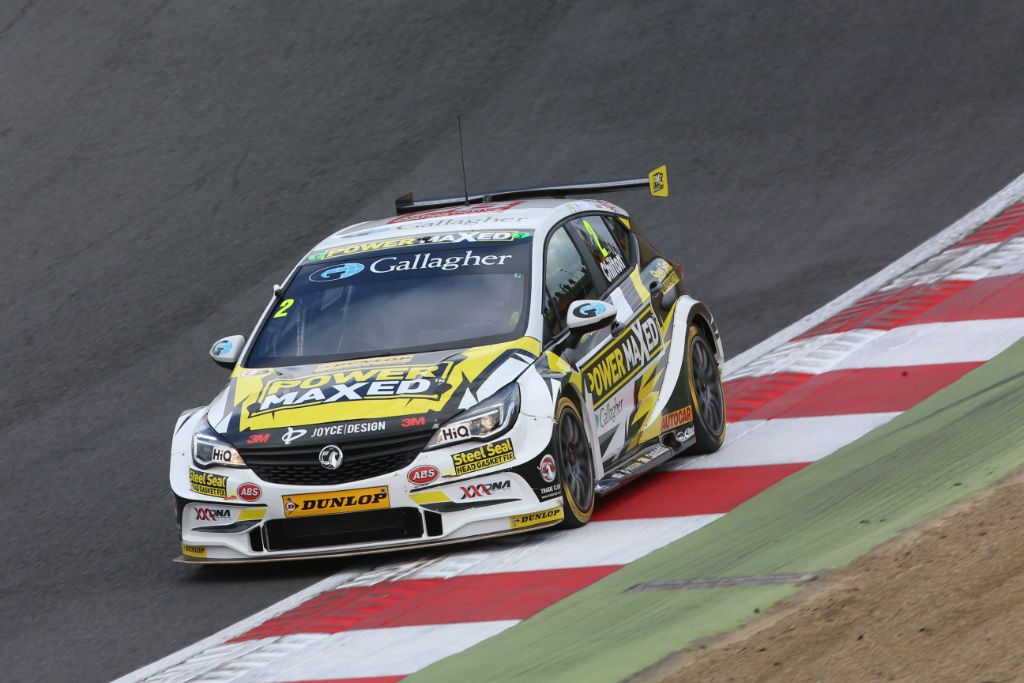 Qualifying was a stop start affair as rain played havoc bring red flag breaks and yellow periods that meant getting a clean lap in was tricky at best.

Jeff Smith in the Eurotech Racing Honda Civic landed the pole and with it the series lead just ahead of the 2016 race one pole sitter Tom Ingram and his Speedworks Toyota Avensis, sporting an up to date facelift based on the production model.

’16 champion Gordon Shedden and Matt Neal in their works Halfords Yuasa Civics were next ahead of Colin Turkington, returning to WSR after 2 years away from the 1 series BMW. 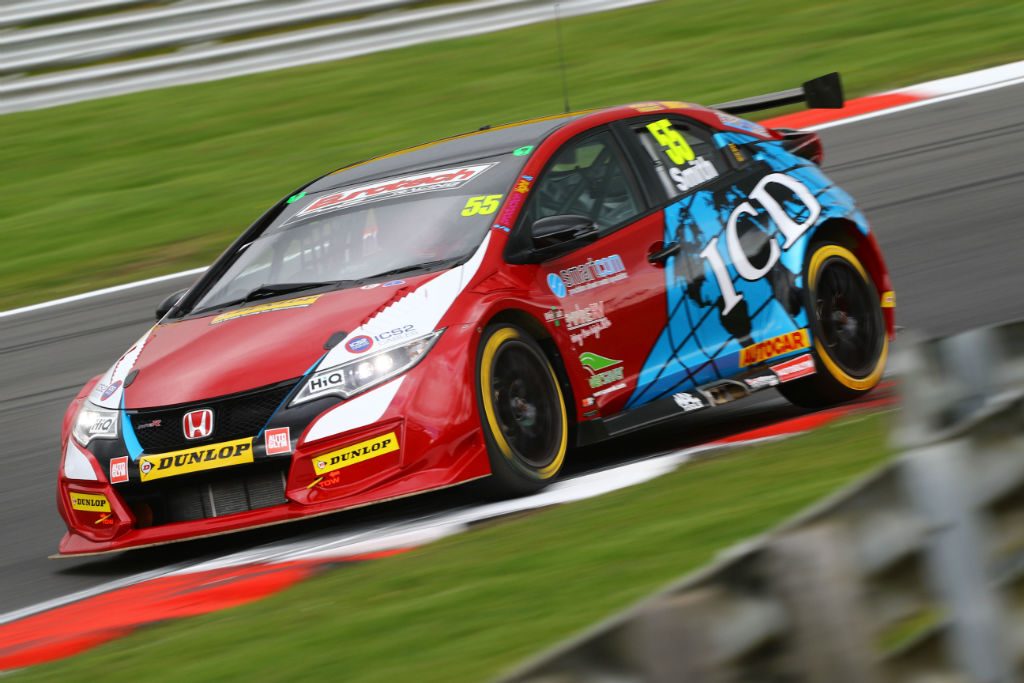 Adam Morgan’s Ciceley Motorsport run Wix Racing Mercedes A Class looked to have picked up a winter sunburn in its new bright red Mac Tools livery was 6th ahead of the second (and 4th Honda in the top 10 ) Eurotech Civic of Jack Goff. 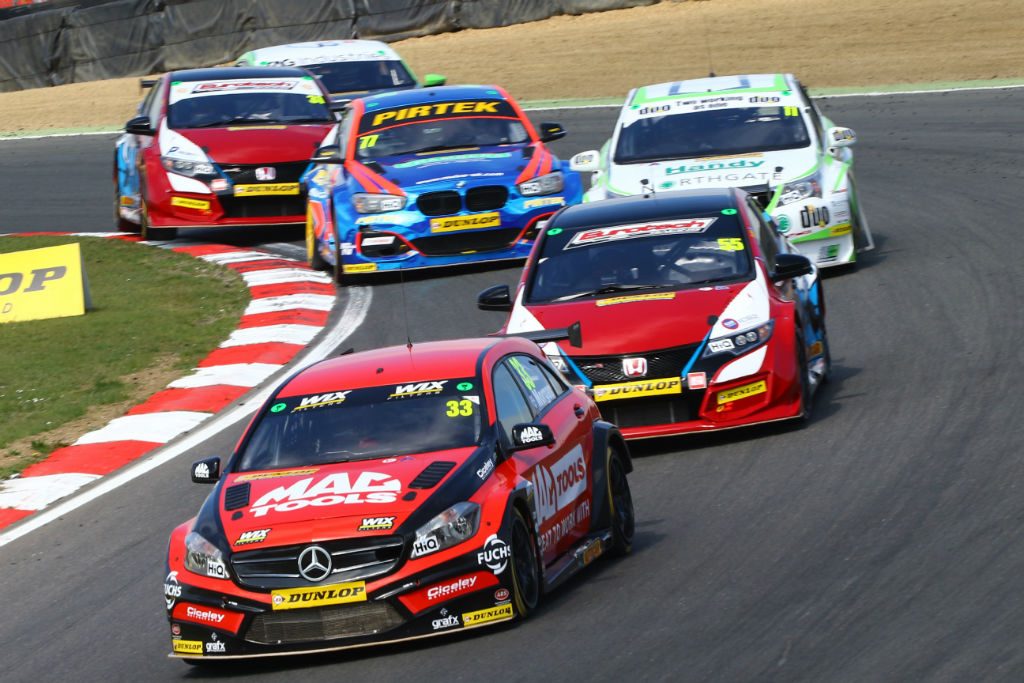 Ingram got the jump on Smith at the lights and led through the early part of the lap but, behind Turkington and Neal had got together, the latter appearing to move across on the fast starting BMW driver as he negotiated a path between the two Hondas and bringing out the safety car.

Ingram led away and built up a lead as Smith struggled on the soft tyre to keep Shedden and Morgan behind him before, being forced to retire with a front wheel nut problem in the latter stages.

Morgan would chase down Shedden in the latter part of the race but, had to settle for 3rd on the road at the flag behind the reigning champion. Smith’s team mate Goff would keep the Eurotech flag flying though as he battled Austin for an eventual 4th place. 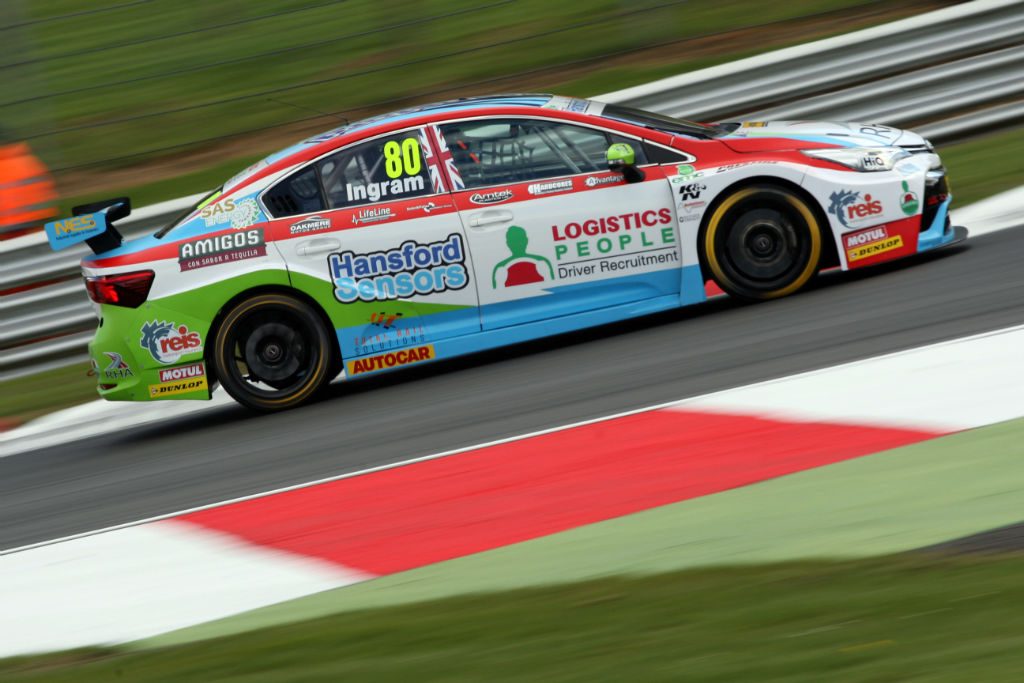 Andrew Jordan and Rob Collard in similar WSR BMWs but sporting different paint jobs were up next ahead of Mat Jackson’s Focus.

Michael Epps in another of the Team HARD VWs was not going to be a pushover either scoring his best result in 9th for Tony Gilham’s squad, reunited with the VWs they had originally bought to the series a few years ago. Tom Chilton took tenth for Power Maxed Vauxhall in the new Astras debut event.

Race 2 took a while to get going as, firstly Ingram had dramas on the initial warm up laps before causing the start to be aborted once on the grid. The second green flag laps should have seen him take up position at the back of the grid but, he opted to take pole and a drive thru penalty during the race, however.

Jason Plato’s Adrian Flux BMR Subaru pulled across Mat Simpson’s works supported Honda Civic, pitching the former champ into the concrete wall and bringing out the red flags. Fortunately everyone involved was unharmed although it did signal the end of Jason Plato’s day. 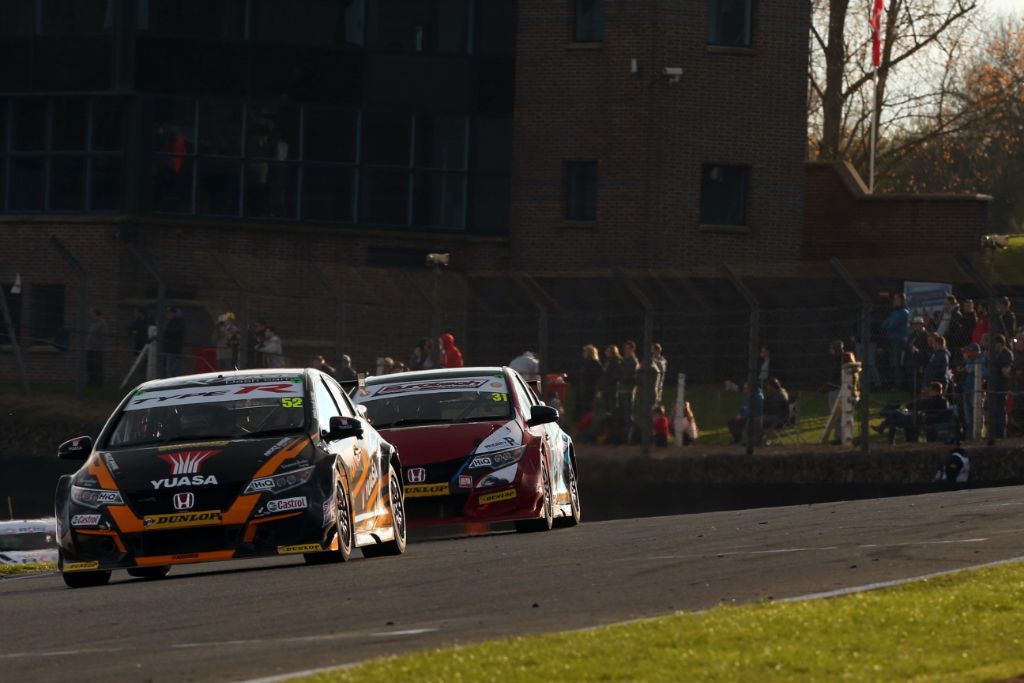 Eventually the race got going, Ingram led initially before Shedden took over for the duration of the event. A short safety car period momentarily reset the pack but Shedden wasn’t going to be beaten.

Collard, continuing his race 1 form was looking racy and battled though a pack consisting of Morgan, Austin, team mate Jordan and Ingram to take second ahead of the race 1 winner, Austin would cross the line 4th but be disqualified after the race for a yellow flag infringement while battling with Morgan and Jordan meaning Morgan would be 4th ahead of Jackson, Jordan, Josh Cook in the Maximum Motorsport Ford Focus, Chilton, Turkington and Epps eventually taking tenth. 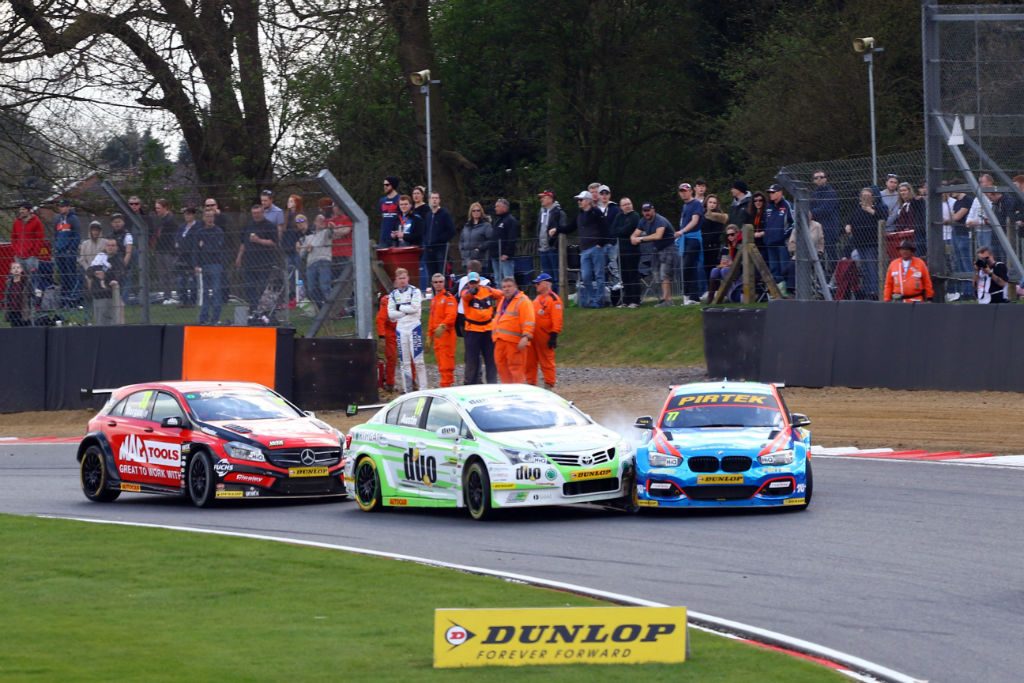 Following Austin DQ, Chilton would be promoted to pole ahead of Cook and the rest for the days third encounter.

Jordan got right what his rwd compatriots couldn’t in the day’s third event by successfully sliding through Cook and Chilton to lead into the first lap, Jackson also looked to get a good start before taking a trip across the gravel and out of contention.

This race however was going to be about the BMWs, Jordan taking a relatively straight forward victory while Collard and Turkington fought for positions. 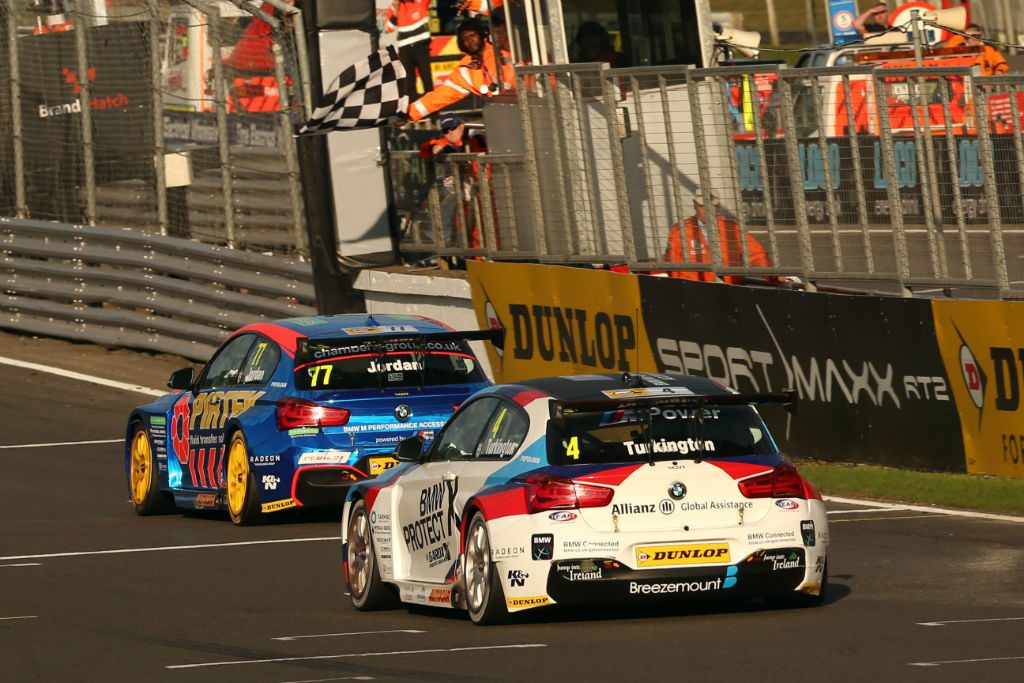 Turkington taking a fantastic second right on Jordan’s tail at the flag and Collard, in his heavier car 6th. Chilton took a well deserved podium for Power Maxed Vauxhall in their first outing with Neal, Morgan and Collard up next. Shedden, Goff, Epps (recording 3 top ten finishes this meeting) and Hill completed the top ten. 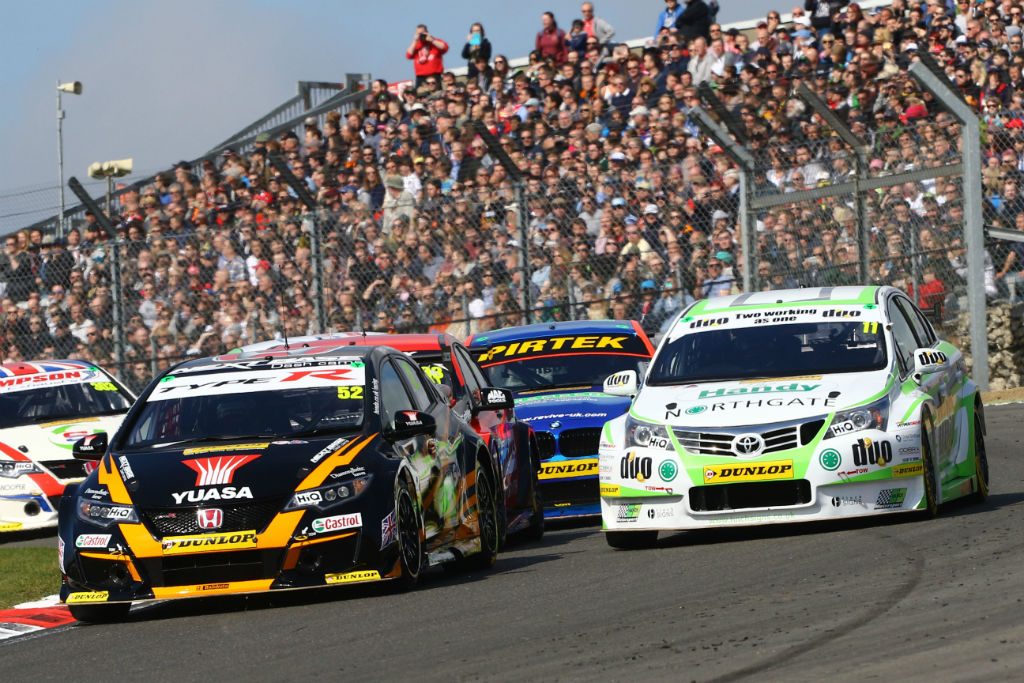 So, as it stands at the moment Gordon Shedden leads from Tom Ingram and Andrew Jordan as the series heads to Donington on Easter weekend.