With the sun shining around 40,000 tin top fans descended upon Oulton Park for the 4th round of the 2016 BTCC championship and, for different reasons than last time out at Thruxton, both BMR Subaru and Eurotech Honda would be making the early headlines.

Following the withdrawal from the Thruxton round due to safety concerns the BMR squad were back, and back in force with 2014 champion Colin Turkington planting his Levorg on the pole position. 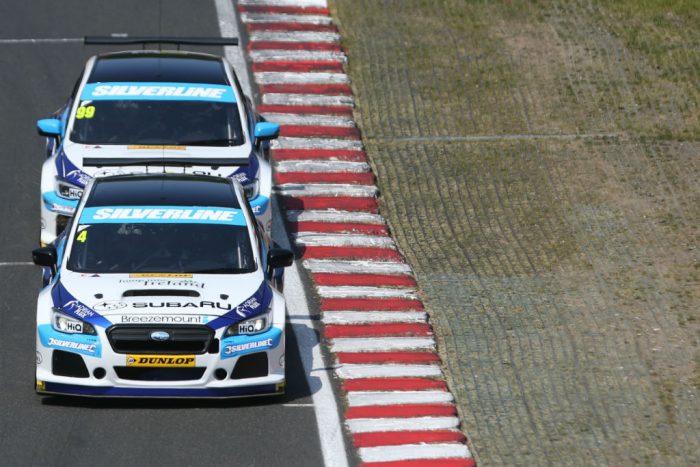 Series newcomer Daniel Lloyd was next up in the Eurotech prepared Civic ahead of the more established names. 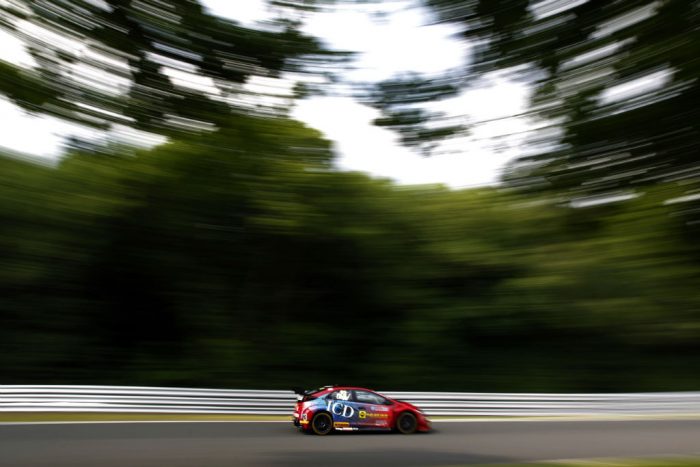 Sam Tordoff in the Gardex JCT600 BMW 1M qualified third ahead of Tom Ingram’s Speedworks Toyota Avensis heading up a pair of 2 time champions in Gordon Shedden in his Yuasa Halfords Honda Civic Type R and Jason PLato in the second of the BMR Subaru Levorgs.

Ash Sutton continued his impressive start to the season by qualifying 7th in the RCIB Insurance MG6 ahead of joint championship leader Matt Neal in the second Yuasa Civic.

Aron Smith’s BKR VW CC and Josh Cook in the second of the RCIB MGs rounded out the top ten.

Colin Turkington produced a vintage performance to take an unchallenged race one victory, Tordoff – one of the few race 1 drivers not to start on the soft tyre briefly stayed with the Subaru but the lighter Levorg got the better to claim the first victory in the BTCC for the Japanese Marque.

Plato would make it two Subaru’s on the podium following a race long battle with first Lloyd and then Shedden, who would go on to take 4th ahead of Ingram, piping Lloyd to the line for 5th. 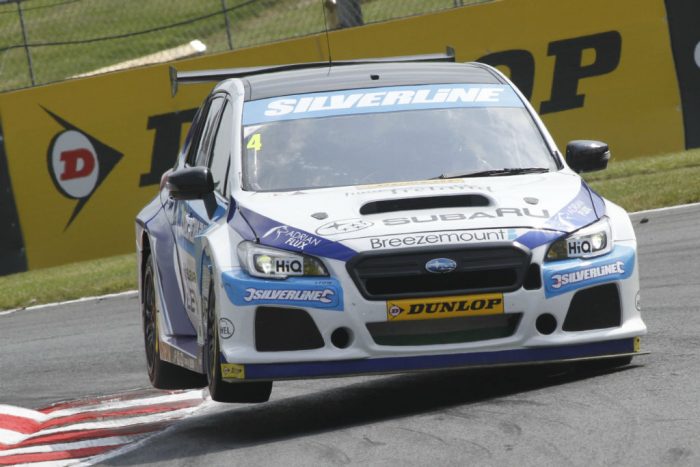 Cook would bring his MG home next, 7th after getting stuck in to the battle involving Ingram, Lloyd, his MG teammate Sutton who, dropped like a stone in the closing laps, Aron Smith, Neal and Andrew Jordan in the Pirtek Racing Ford Focus, the latter three completing the top ten. 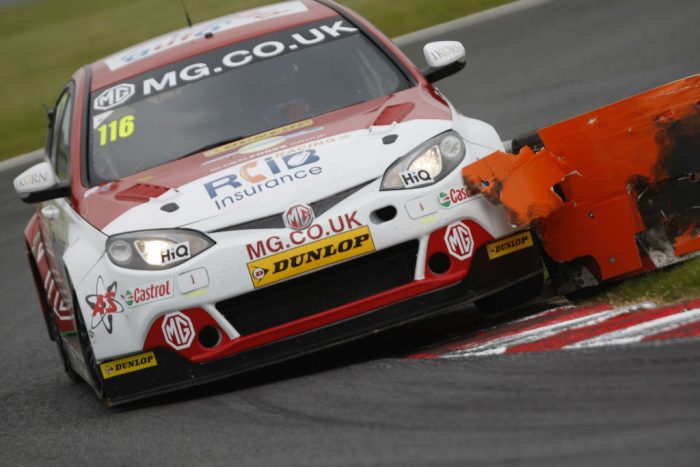 Race two saw the grid line up as race 1 had ended with Turkington again on the pole, only this time the Subaru would carry ballast Tordoff, alongside him was used to his BMW with weight on and got a great start leading into the first tour before the safety car was deployed to clear a few minor incidents. 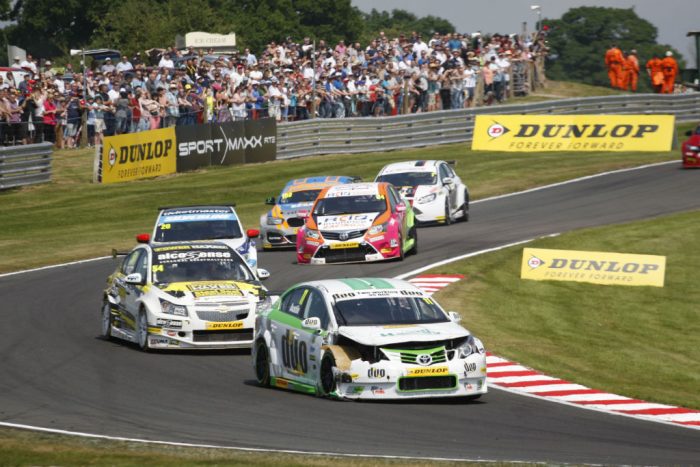 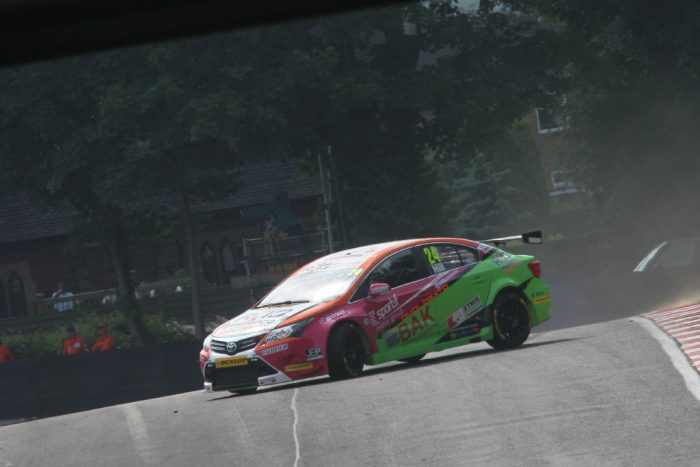 After the brief interlude, Tordoff settled down and took a commanding win that would see him sit atop the championship prior to the day’s final encounter.

Turkington and Plato took the second and third (and with it the second ever double podium for Subaru in the BTCC) while behind another epic encounter saw Neal and Cook continue where they had left of from at Thruxton, Collard had joined the fight, briefly passing both as he stormed from the lower places following a bad qualifying and race 1 incident before again being forced into retirement following contact with the MG. 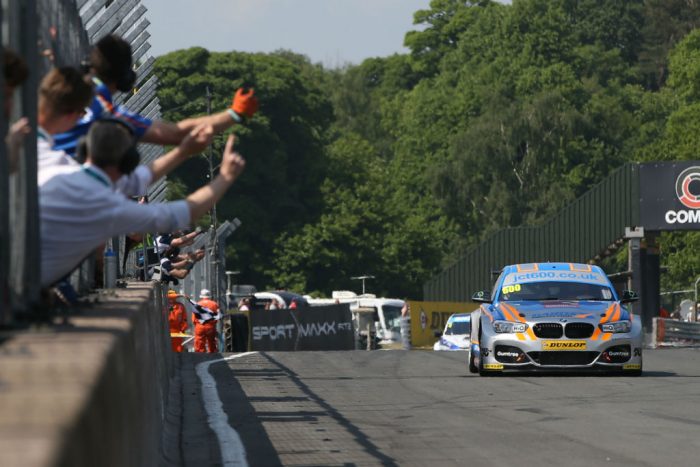 Shedden was 4th ahead of Ingram with Cook pipping Neal to 6th. Jordan to 7th and two drivers having less than stellar weekends themselves in Jack Goff in the IHG Rewards liveried BMW 9th and Joint championship leader at the start of the weekend Mat Jackson in his Motorbase Ford Focus.

The reverse grid draw was kind to Matt Neal and the works Honda driver lined up on the pole ahead of Cook, Ingram, Shedden and the rest.
At the lights the two works Hondas quickly led away, Ingram and Cook slotting in behind in 3rd and 4th respectively in a race 3 that had more of a race 1 feel to it for most of the proceedings.

Ingram and Cook fought hard for 3rd while the chasing pack of Subarus, BMWs, Fords, Hondas and the like laid in wait for something to happen. 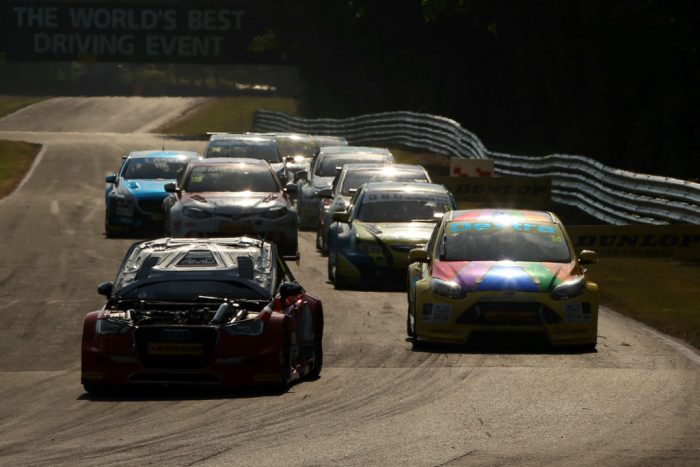 By the three quarter distance mark around 10 cars were bottled up behind the Toyota, as the battle for points and positions intensified. 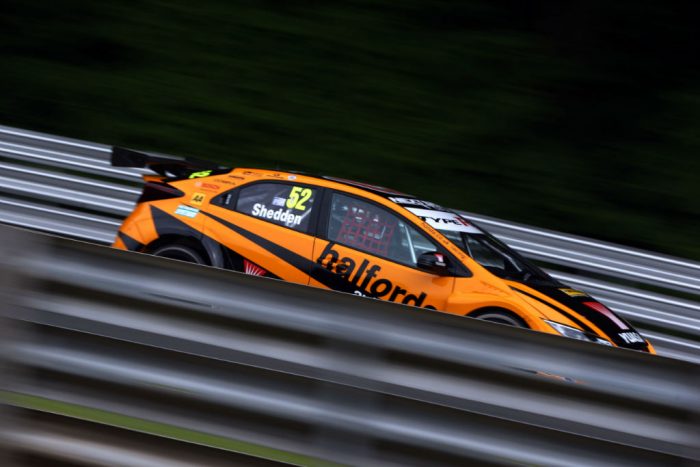 2 laps from the end however something did happen. Shedden, who had shadowed Neal for most of the contest picked up a puncture and ran round to the pits before eventually finishing 23rd at the flag, the race for 3rd had become the race for second and the BMW pair of Tordoff and Collard were getting racier as the contest went on – the latter coming from down in 25th at the start to finish 6th. 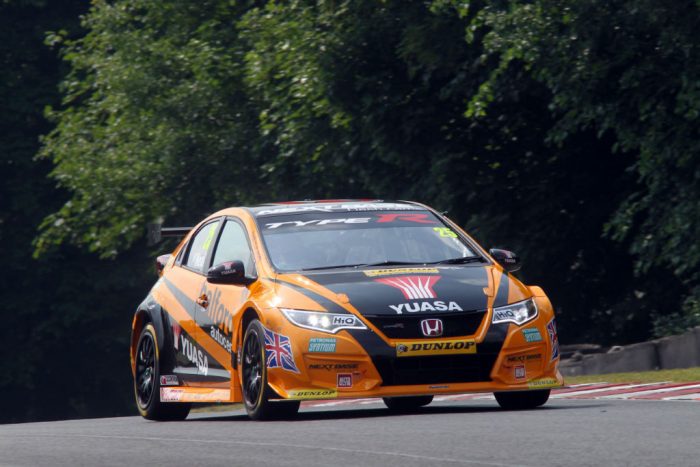 The podium places would go, eventually to Tordoff 2nd, after some fantastic overtaking in the latter laps, and Plato, securing a third visit to the podium in 3rd after Ingram and Cook delayed each other in the final corners promting a little argey bargey from the youngsters on their way back to the pits.

Turkington and Jordan again picked up points for 7th an 8th while Jake Hill took 9th in his Team HARD Toyota Avensis ahead of Adam Moragn’s Wix Mercedes, another driver having a less than satisfactory afternoon. 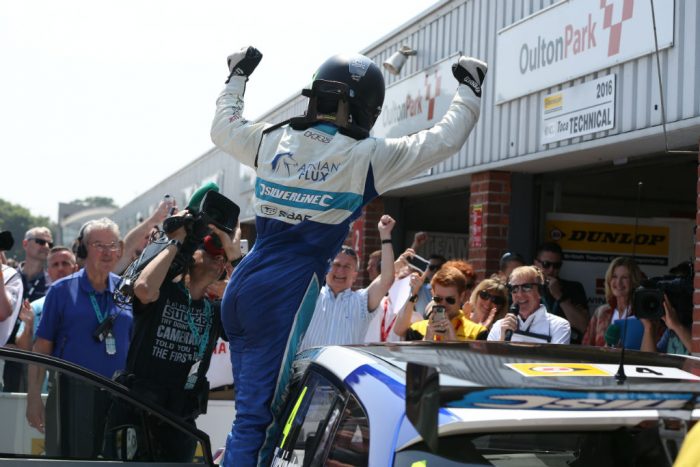 The result see’s Sam Tordoff head to Croft in a few weeks time as championship leader 1 point ahead of Matt Neal, but what can the Subaru squad do for the rest of the season? We’ll find out soon.