While the French were stamping their authority all over the WTCC in their backyard the best of British (Italian, Irish, Swiss and American) were at Donington for the eagerly awaited second round of the 2014 British Touring Car Championship.

With a race meeting now behind the teams and success ballast firmly in place on some of the cars, one wondered if any team or teams would begin to show any immediate advantage and if so who would it be? Honda? Pirtek? Ebay? None of the above?

Well yes and no, Triple 8 MG were on the pace from first practice and stayed at the head of the field through qualifying with Jason Plato on the pole and Sam Tordoff in third with the Honda of Gordan Shedden splitting the two. Colin Turkington completed the second row of the grid for Ebay in the 1 series BMW ahead of the two VW Passatts of Aron Smith and Alain Menu. Reigning champion and series leader Andrew Jordan in 7th, Jack Goff’s Vauxhall, Matt Neal in the “new” Civic Tourer behind the heavier “old” car of Jordan (!) and Marc Hynes rounding out the top 10 in his MG6 – in a time that would have been enough for pole position 12 months ago!

So although the grid for race one lines up in a familiar sort of way it’s worth noting that less than a second covered the top 16 cars in qualifying! This could get frantic first time through the Craner Curves.
The first thing that troubled the teams however was the British Bank Holiday weather, with rain falling for the first part of the day leaving a wet, albeit drying track for race 1, no one would gamble however and the field took the grid all shod with wet weather tyres.

The lights go out we are racing!

Lap 1 Shedden is slow away while Turkington briefly splits the MGs before Tordoff retakes second spot behind Plato, Hunter Abbot and Warren Scott end race 1 early in the Old Hairpin gravel, a recovering Shedden takes the BMW – whose tyres haven’t reached their full potential yet for 3rd.

Lap 2 Drama for Dave Newsham as his Focus spins at the Craner Curves, having avoided anything solid he rejoins at the Old Hairpin.

Lap 3 Jordan passes Aron Smith for 5th place at Redgate, the track seems to be drying.

Lap 4 Rob Collard and Matt Neal both pass Aron Smith and move up to 6th and 7th respectively, these conditions are a bit of an unknown for most drivers, with new cars and teams few will have any data to look at for these conditions. Further down the order Rob Austin brings his Audi in for slick tyres.

Lap 5 The weather is certainly a leveller, Andrew Jordan with 45kg of ballast on board sets the fastest lap so far. Tordoff is right on the back of Plato at the front with Turkington all over the Honda of Shedden not far behind them.

Lap 7 Jordan gets a much better drive out of Redgate and takes the Honda of Shedden, Collard also pus a move on the 2012 champion.

Lap 8 Jordan and Collard this time around take the BMW of Turkington for 3rd and 4th respectively. Newsham and Morgan tangle and go off at the chicane – both rejoin but lose out to Lea Wood and Mat Jackson.
At Half distance with the track rapidly drying the drivers are moving around in a bid to cool the tyres.

Lap 10 Rob Austin on slicks is the fastest man on track although he is 2 laps down.

Lap 13 Goff and Wood battle hard for the lower points but get caught out by the fast Fords of Newsham and Jackson through the Craner Curves.

Lap 15 Robb Holland tangles with Jack Clarke, Holland runs through the gravel losing the rear bumper in the process.

Final Lap The MG pair take a relatively easy victory with Plato leading home Tordoff from Jordan, Collard, Turkington, Shedden, Giovanardi, Neal, Smithand Tom Ingram, one final piece of action to round off race one was Ollie Jackson’s near miss as he locks up his brakes and narrowly avoids being collected by Aiden Moffat’s Chevrolet or James Cole’s Toyota.

Race 1 over, plenty of on track action without too much incident, just how we like the BTCC.

So with race 1 being run in changeable conditions it was though that race 2 would be dry, that was until a downpour during the Porsche Carrera Cup GB race drenched Donington Park changed that.

This was not good news for the BTCC teams, and again the field lined up on the Dunlop wet tyre, the rain may have stopped, but the track was very, very wet.

Lights out and we’re racing again at Donington.

Lap 1 The conditions catch out two Toyotas almost immediately with James Cole taking out a track marker on the inside of the circuit, and Lea Wood sliding wide and ploughing through the Redgate gravel, Menu is off at the exit of the Old Hairpin, slides across the grass, back across the track and into the gravel at Schwanz, that was so lucky no one hit him, that could have been horrendous. Marc Hynes also has a small gravel excursion. The safety car is out and we breathe.

Order behind the safety car is Tordoff from Plato, Collard, Turkington, Jordan, Neal and Shedden.

Lap 5 Safety car in and Jordan is on it straight away passing Turkington into Redgate, Collard loses the back end through the Craner Curves and winds up as so many have before him beached in the Old Hairpin gravel, Chris Stockton also takes his Chevrolet off road but rejoins towards the back of the pack.

And then this happened.

Lap 6 Rob Austin appeared to lose the Audi at Redgate and takes to the grass, Stockton and Clarke had to take avoiding action forcing Stockton off as well, James Cole following behind is then faced with a recovering Austin and with nowhere to go slams into the Audi (S3) of Robb Holland sending the pair across the track and destroying both cars. Neither will be out again today, Cole could be doubtful for Thruxton in a fortnight!
The safety car was once again deployed. 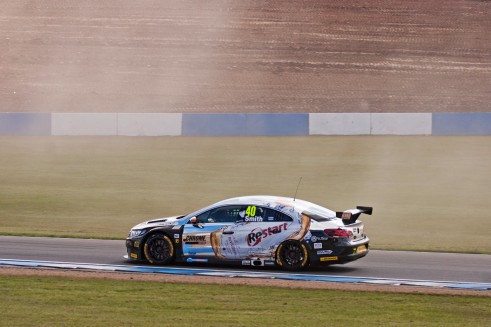 Lap 11 With the safety car ready to come in to the pits it was time for bizarre incident of the day #37412, Ollie Jackson’s Proton had a problem at the rear of the field behind the safety car and he was trying to get it back to pit lane, however, the car had failed right on the final chicane as the safety car went lights out and ready to return to the pits, fortunately the train of cars was backed up by Tordoff further down the track which prompted furious flag waving from the marshals and a further lap behind the SC!

Lap 12 Finally we are racing again…the track is still wet but not as bad as it was and now we have an 8 lap sprint to the flag. Matt Neal has had a small moment of his own coming onto the main straight and has Smith and Jackson (Matt) all over him while Shedden attacks Jordan.

Lap 13 Hunter Abbot off at Redgate, yellow flags out no overtaking until the car is moved, Neal re passes Turkington for 5th

Lap 15 Yellow flags in at Redgate and Newsham and Goff are battling hard for small points with Newsham eventually coming out on top in this battle of the former Clio Cup champs! The conditions are catching everyone out today as Jordan has a moment at the Old Hairpin, Shedden gets past while Neal closes on the champ.

The reverse grid pole for race three would fall to Colin Turkington and, for the first time in BTCC history – due in part to the changeable weather the whole grid would start the race on the Dunlop soft compound tyre. It will be interesting to see how they last towards the end of the race.

Lights out for the final time and we are (dry) racing!

Lap 1 Drama at turn 1 again, Plato touches Jordan but the champion holds on, further back however Moffat and Hynes are not as lucky as contact brings out the safety car once again.
Order behind safety car: Turkington, Neal, Plato, Jackson, Tordoff, Shedden.

Lap 4 We’re back racing, Plato takes Neal for 2nd while Newsham spins out at Redgate as does Jack Goff ehile exiting the Old Hairpin.

Lap 6 Mat Jackson has caught the Plato / Neal battle, Shedden is not far off this podium battle.

Lap 7 Jackson looks like he has lost 4th to Shedden but at the same time almost takes 2nd! Shedden gets the job done later in the lap however.

Lap 10 Menu from the back of the grid is up to 13th and just behind Tom Ingram, let’s hope there is no repeat of what happened at Brands Hatch.

Lap 11 Jordan battles and passes the Mercedes of Adam Morgan, Tom Ingram locks up and hits Rob Austin’s Audi hard forcing both drivers off the track.

Lap 12 Shedden passes Plato for 2nd and sets about chasing the BMW of Turkington for the lead.

Lap 14 Neal now gets back past Plato, tyres fading on the heavy MG.

Lap 15 Having been passed by Jackson’s Focus Andrew Jordan is now on Plato’s tail.

Lap 16 Jordan passes the MG at the chicane.

Lap 17 Shedden has chased down Turkington into the final laps, is there a final twist to this final race of the day?

Final Lap Turkington driving very defensive but Shedden is alongside the BMW, side by side for large portions of the lap. Coming into the final chicane it’s a case of who will brake latest, both go deep, there is contact, both take a short trip across the apex and Shedden emerges the victor from Turkington, Neal, Jackson, Jordan, Plato, Collard, Foster, Menu and Morgan.

The championship is now very, very close with Jordan and Plato sharing the top slot on 87 points with Shedden 1 point behind, Turkington 4th with 84 and Neal 5th with 79.

That’s all from a rather damp Donington where there was no trouble with telemetry and – despite the safety car periods adding lap to the race distances – no problem in knowing when the race should end. Let’s hope the next meeting at Thruxton sees better weather and more great racing.