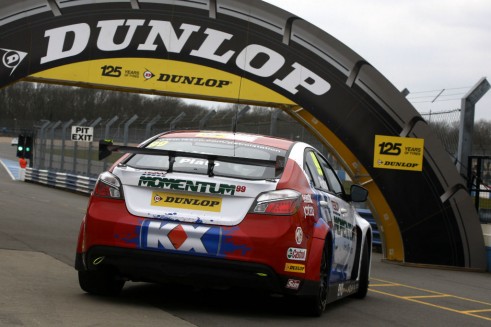 With the BTCC set to recommence for the 2nd half of the 2013 season in a few weeks time, we thought it would be a good idea to bring you up to speed with the season so far since the last rather wet round at Croft.

On scanning the internet, and various social media outlets it would seem that the big stories during the break have been that Jason Plato likes sandwiches, Adam Morgan is useless at barbeques, and Dave Newsham is thinking of growing a beard. Elsewhere Andrew Jordan has been partaking in Rallycross, while a number of the drivers will have been seen in a recent Top Gear race / stunt to decide the world best Taxi, incidentally the race was won by reigning champion Gordon Shedden – a message to the rest of the grid?

The 2013 season started where 2012 had finished, albeit this time on the Indy circuit rather than the full GP loop. Plato made the most of the first round, taking two victories from Andrew Jordan, despite an optimistic lunge from Jordan at the end of the first race; almost handing a surprise victory to Rob Austin in his Audi. It would be a mixed event for Rob, after leading the first lap of 2013 (wonder what odds you would have got on that before the season started) he finished a fine 3rd behind the battle-scarred Plato and Jordan in race one, but his weekend peaked to early, taken out in race two by Frank Wrathall who may not have see him (possibly on the phone) sorry radio to his mechanics(!)

Race 3 saw the first reverse grid, Matt Jackson was the pole sitter and early leader before the Hondas of Neal and Shedden passed, and went on to score the first 1-2 of the season. Further back however Dave Nesham spun his Toyota at Paddock sending cars all over the track as they tried to avoid him, all but the luckless Austin managed as the Toyota swung back across the inside, catching the rear of the Audi as he squeezed by on the grass. The contact sent Austin into the barriers, and the force near enough ripped the side of the car off. Looking at the incident now, after the tragedy of Le Mans, Austin was a very lucky man. A shrewd man too, a T-shirt campaign was quickly put in place with the proceeds going to help repair the car (Sherman) in time for Donington, which is where we head to next.

Reigning champion Gordon Shedden kick started his season after a meeting to forget at Brands, by qualifying on pole, and taking a lights to flag win in race one, although he did have Andrew Jordan to contend with throughout. Jordan finally made the top step in race two, as he continued to prove that he is a genuine title contender. Race two also saw a change in car numbering, as both Matt Neal and Jason Plato celebrated landmark BTCC starts. Neal 500, and Plato 400. Race three saw Colin Turkington take to the front in the BMW 125i Msport ,taking the first victory for the model in the reverse grid race. After a quiet Brands (following a qualifying accident) Turkington could be a man to watch as the season unfolds. Plato headed to Thruxton as the series leader from the consistant Andrew Jordan, Matt Neal, Sam Tordoff, Gordon Shedden. A big shout out to Adam Morgan who with 3 5th places in his Toyota Avensis at Donington moved into 6th in the standings.

Thruxton, the fastest circuit in the UK (Rockingham oval aside), is notoriously hard on tyres as the drivers fight for the best line through the complex at the beginning of the lap, and the chicane at the end. Andrew Jordan knows this all too well. After dominating for most of the weekend his tyre blew within sight of the flag, handing victory to Matt Neal. Race one was not without other incidents, Plato and Shedden tangled at the complex on the first lap, sending the champion to the back of the field, a lap down while Plato was left to battle for the podium with Tom Onslow-Cole’s VW Passat. Jordan’s last lap failure eventually saw him finish in 11th place, and meant the rest of the weekend would be seen as a damage limitation exercise.

Race two was Neal all the way, with Onslow-Cole going one better for second, third was fought out between the recovering Honda’s of Shedden and Jordan, with the Scotsman taking the final podium position by tenths. Race 3 saw plenty of action at the front, as the reverse grid mixed up the order. After the dust had settled Plato set into a rhythm and looked like he was set for victory, the Hondas were clawing their way back in to contention, passing Tordoff and Onslow-Cole, before getting held up with Jeff Smith’s own Civic in the latter stages. Plato was about to receive some karma for the Shedden incident earlier on, as with two laps left, he himself suffered a puncture and was forced to pit, losing all hope of points. Shedden took the victory ahead of Neal, with Jordan taking a well deserved podium following his race one disappointment. Onslow-Cole took a great 4th to go with his two podiums. At Thruxton it would seem that the car to have was a Honda. Neal now lead the championship from Jordan, Plato, Shedden and Tordoff with Jeff Smith now moving to 6th following his two 6th and a 5th. Oulton Park beckons.

Plato looked to put the demons of Thruxton behind him with two dominant victories in race one, and two, with MG scoring a 1-2 in race one. Race two wasn’t so good for Tordoff however, as the soft tyres on his car really left him a sitting duck as he slipped down the order, and out in the closing stages following contact with the Ford Focus of Matt Jackson. Shedden kept up his title defence with a 3rd in race one, 2nd in race two, but dropped out of race three shortly after Plato caught fire, leaving the consistent Andrew Jordan to take the spoils after his Eurotech, Pirtek Racing teammate Jeff Smith spun out of the lead with the end in sight. Turkington made it two 2nd places out of three races with Adam Morgan taking the final – and his first podium spot, fractions of a second ahead of Matt Neal in a race which had just about everything; constant lead battles and changes, troubled cars on two wheels nearly rolling, and many more incidents – oh yes this is why thousands of you watch the BTCC, its never dull! The championship had closed right up by this time, with Neal leading but only seven points covered the top three positions.

A wet weekend in North Yorkshire, but the weather didn’t keep the crowd away, neither did the fact that the race clashed with a famous French race which had started the previous afternoon. Not to be outdone, the BTCC boys made sure that they got their time in the limelight, as most of the motorsport world kept tabs on North West France.

Race one saw Turkington take a commanding lights to flag victory in the BMW, and the first soft tyre victory without the aid of a reverse grid. If the car to have at Thruxton was a Honda, the car to have at Croft was a BMW! Neal and Shedden finished 2nd and 3rd, with Turkington’s ever improving teammate Nick Foster, finishing an excellent 4th. Rain had threatened race one, but didn’t amount to much. Race two however, did start wet and proved a problem with some teams for which tyres to fit. MG chose the wets, and for a lap and a half they were right…unfortunately the track dried as quickly as it had got wet, and they dropped down the order like a stones. Turkington again took a victory, proving that the BMW is as good with success ballast on hard tyres, as it is light and on softs – could prove interesting for the second half of the season! Shedden took 2nd while Onslow-Cole took another fantastic podium, ahead of Neal and Jordan.

Race three was wet, so everyone started on wet tyres. Foster got away in the lead, helped no doubt by the rear wheel drive, proving that the BMW was also good in the wet, while Morgan who had lined up first followed him but the action here was further back. The Hondas and Turkington were making short work of the guys in front of them. Further back Plato and Tordoff were recovering from terrible (by their standards) grid positions, as a result of being lapped in race two. Neal and Turkington eventually took to the front, and it looked like Neal would take race three with relative ease, as Turkington followed a few seconds behind. But on the last lap, two wild slides from the 3 times champion almost let Turkington in for a hat trick. Neal held on for victory with Jordan taking 3rd ahead of Shedden, Newshaw with Plato recovered to finish a fine 6th.

Neal again leads the championship, but 40 points now cover the top 5 drivers. It would take a brave person to pick a winner at this point of the year, as we wait to see what happens when we return to racing at Snetterton!

Many of the BTCC teams took to Snetterton a few weeks back for an official test session, featuring most of the race drivers but also giving the opportunity for the teams to try the next breed of BTCC racer out. The results were interesting to say the least. The MGs of Plato and Tordoff were quick in every session, while Jack Goff in the VW Passat really impressed, by setting fast, competitive times on old tyres. Honda Yuasa didn’t attend the test, so how Matt Neal and Gordon Shedden will shape up once racing recommences remains to be seen, but the things that you can count on is that paint will be swapped, door mirrors will be removed (forcefully), and tempers will be lost.

BTCC we love it!