This weekend the BTCC made its traditional trip to Scotland, the fans were out in force to support their reining champion Gordon Shedden – although he was not the only competitor local to the land, Dave Newsham was hoping for an upturn in his luck in what would be considered his home race. Youngster Aiden Mofat also became the youngest starter in BTCC history at just 16 years old. Other new, and not so new faces would appear at the Knockhill round. Mike Bushell and Kieran Gallagher, would also make their series debut at the Scottish track, while Paul O’Neil made a welcome return to the series. Jeff Smith, Andy Neate and James Kaye all missed the Scottish round. 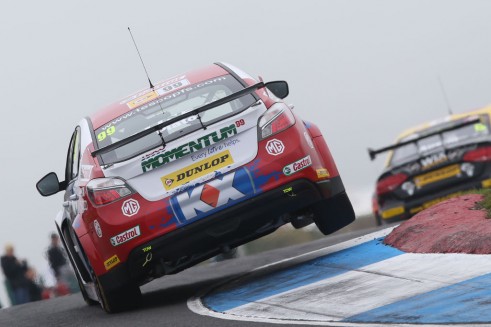 Qualifying saw the usual suspects at the sharp end, as the 3 Honda Civics of Andrew Jordan, Shedden and series leader Matt Neal along with Jason Plato’s MG6 and the rapidly improving BMW 1 series of Colin Turkington were all bested by the Audi A4 of Rob Austin! Taking a popular debut pole from Turkington, Jordan, Shedden and the rest. Jordan however would start in 9th following a six place penalty in lieu of an incident in race 2 at Snetterton.

So with 2 rear wheel drive cars on the front rows and the cars with heavy success ballast behind them – one would expect the Audi and BMW to take off and vanish, and that’s just what happened!

Austin made a great start to get away in the lead from Turkington and Shedden, all went cleanly through the first part of the tight and twisty Scottish track. Jordan starting from 9th has a go at passing Frank Wrathall’s Toyota at the end of lap 1 in a bid to claw back places and keep his championship hope alive. Lap 2 and Turkington makes a pass on Austin and takes the lead, Austin now has the Honda of Shedden to contend with. Further back Jordan is battling the MG of (Snetterton race 1 wniner) Sam Tordoff with Rob Collard’s BMW not far from the pair, while just in front Adam Morgan continues to impress as he passes 3 time champion Matt Neal.

Lap 9 and a big crash, Paul O’Neil’s Vectra is turned around and suffers heavy from damage with the barrier at the end of the lap, following contact with the BMW of Nick Foster. Safety car is out with the order Turkington, Shedden, Austin, Plato, Morgan, Neal, Jordan, Collard, Tordoff, Aron Smith and Dan Welch – who happened to run into the back of Smith’s Focus under safety car conditions!

Racing again, and Turkington continues where he left off by pulling away from the battling bunch behind him. Austin latches onto Shedden while Collard attacks the similar car of Jordan. In-between the two battles Morgan is adding another former champion to his tally as he passes Plato for 4th – anyone bet against him taking a victory before the season is out? 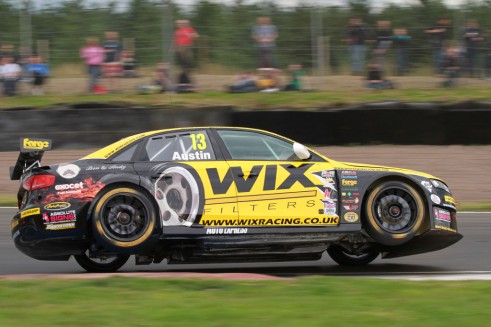 Collard finally passes Jordan for 7th, then sets about chasing down Neal. Up front Austin is all over the back of Shedden and looking for 2nd, the fan favourite vs the local boy and reining champion, this could get interesting! Morgan is catching both of them. Collard takes Neal for 6th but we are running out of laps, Shedden must have had the widest rear track available fitted to his Civic as he defends the relentless Austin all the way to the flag. Turkington takes a dominant victory, Morgan takes an excellent 4th from Plato, then follow Collard, Neal, Jordan, Tordoff and Smith. Plenty of side by side action, and not too many incidents! Lets see what race two brings.

Paul O’Neil didn’t take the start due to damage from his race 1 shunt, but otherwise the grid lined up as you would expect with plenty of fast cars and low ballast towards the front of the field.

From the start Austin gets a run on Shedden and takes the local man – who works at the circuit as his day job – into the first corner, Turkington – exploiting the power, grip and getaway expected with a rear wheel drive car – takes the lead and sets about building a gap to the rest headed by Austin, Shedden, Plato, Collard, Morgan, Neal and Jordan.

Lower down the field two drivers who would have been hoping for better results were Tom Onslow-Cole and Matt Jackson, they fight to reach the points. Lap 8 and the Honda’s of Neal and Jordan are at it again, this time battling for 7th – but more importantly championship points! The top two in the championship haven’t really been troubling the leaders so far this weekend. Just in front of them though Adam Morgan suffers a driveshaft failure and retires from 6th, further back former British Superbike star, Warren Scott shows us how good he is on two wheels as he (and most of the rest of the drivers in fairness) cut the kerbs at the chicane while battling with the S2000 cars. It may not be for points, but there’s great racing all down the field! 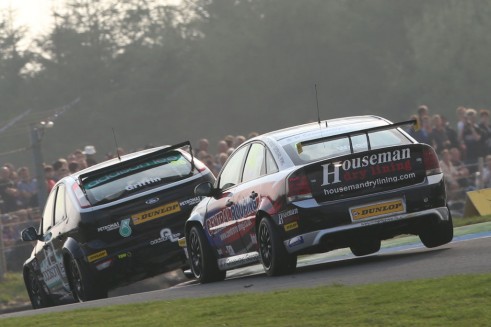 Wrathall and Onlow-Cole get close as the Toyota of Wrathall gets the better of Onslow-Cole’s VW Passat, Dan Welch also manages to steer his Proton past the VW for 12th place. Back towards the front and the Honda pair have passed Plato, and are now 5th and 6th following the retirement of Morgan. But at the front its Turkington again, Austin holds off Shedden for a career best 2nd place. Collard is 4th followed by Neal, Jordan, Plato, Tordoff, Jackson and Dave Newsham taking the final point.

Jordan leads, Collard gets a great start in the BMW. Neal, Austin, Turkington, Shedden and Plato follow, bad news for Plato’s team-mate though as Tordoff’s car had failed on the way to the grid and was being pushed to safety as the field completed the first lap.

Wrathall goes off at the start of Lap 2 while Turkington hassles Austin for 4th before eventually taking the position at the hairpin. Shedden has a go (again) at the Audi, but Austin is defending hard from the Scot, who, ironically passes Austin at Scotsman corner a few laps later. Plato, Newsham, Jackson and Welch now begin to reel in Austin. 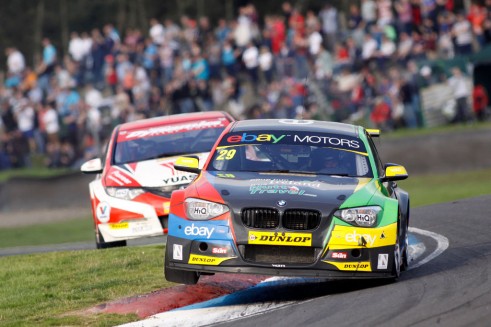 Lap 8 and the safety car is out again, this time to remove a parked car in a dangerous position. After a short pause we’re back racing! Jordan gets a great restart, Newsham drops back, Plato battles Austin, Jackson and Foster touch and continue. Jackson’s team-mate is not so lucky though, after contact with Mike Bushell. Wow race three always seems deliver action!

Lap 12 and Newsham pits, as does Tom Onlslow-Cole who got caught in the Foster/Jackson incident. Back at the front Neal is catching Collard for 2nd place.

Lap 17 and a huge engine failure for Gordon Shedden, on the start/finish straight, right in front of the Honda engineers! The waved yellow flags at the first corner hinder Shedden’s team mate Neal, as he is unable to complete the pass on Collard for 2nd in to turn 1. Neal bides his time though, and the two race hard but fair through the mid part of the lap, until Neal completes the move at the hairpin. Collard fights back across the line, and this time there is no yellow flag, Neal holds the position as Collards team mate (and double race winner) Turkington looks to get on the podium for a third time!

It isn’t to be however and Jordan takes a popular win from Neal, and the two BMWs with Austin, Plato, Jackson, Foster and Adam Morgan from the back of the grid following his retirement in race 2 completing the top 10. 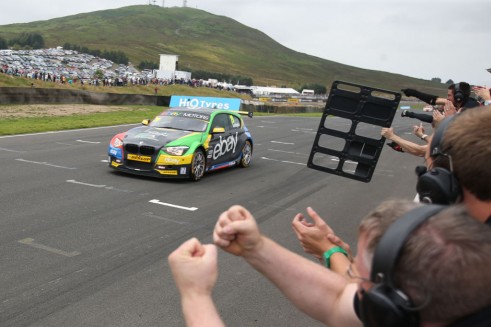 Following the race it emerged that Turkington’s BMW exceeded the boost limit, and was disqualified from race 3. This promoted Austin to 4th, Plato 5th etc which means that Gordon Shedden remains 3rd in the championship with 266, while Turkington leaves Scotland on 263. Neal still heads the championship but his lead over Jordan is now 6 points, the MG’s drop away a little in 5th and 6th, with Adam Morgan best of the rest in 7th.

3 Rounds to go, 4 contenders, 2 makes of car, but only 1 champion, who will it be? It wont be confirmed at Rockingham, but you can guarantee there should be plenty of action!

All images courtesy of btcc.net