It was only a matter of time before a Chinese company blew the jump start, battery pack competition out of the water. Audew has done just that.

Never have we tested a more up to date, cutting edge battery pack, jump starter combo. And all for £69.99! 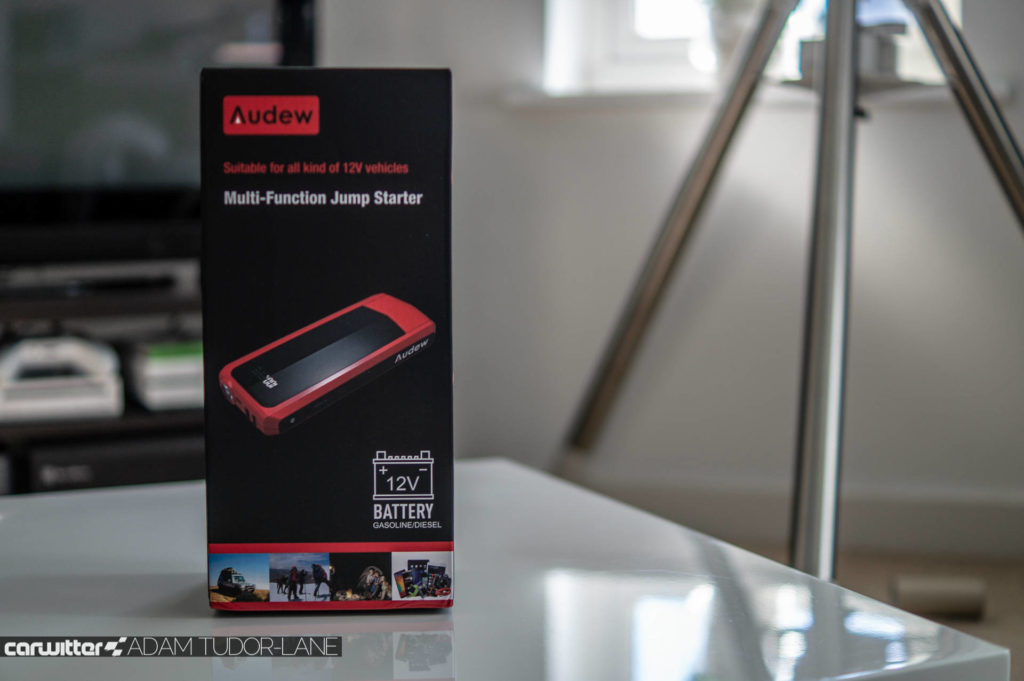 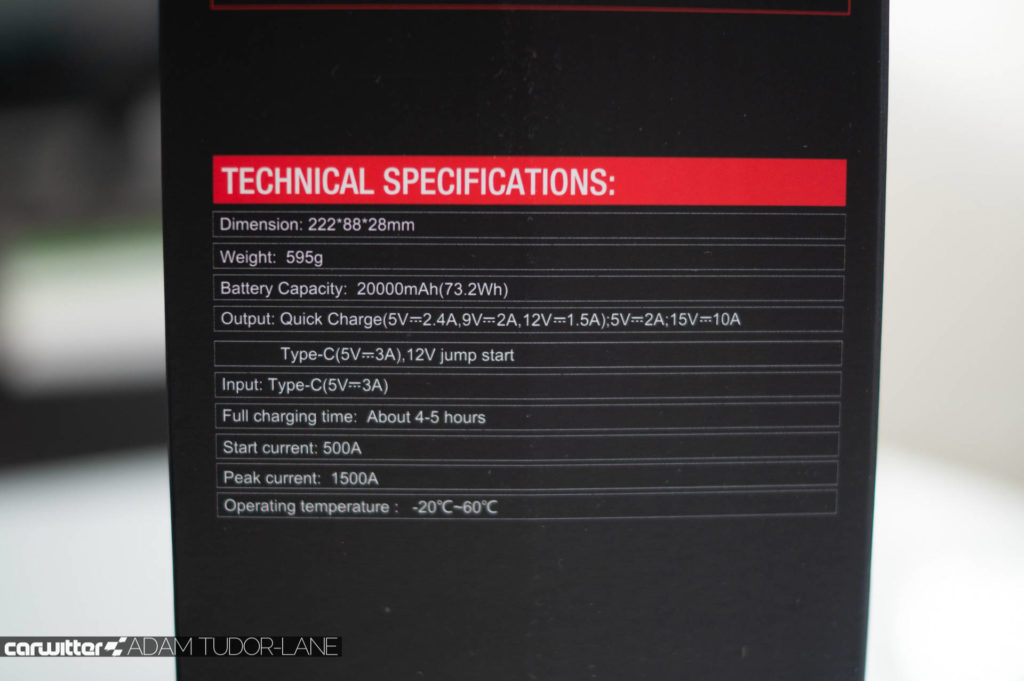 It’s a 20,000 mAh battery pack with the added functionality of jump-starting either petrol or diesel cars and trucks. Unlike smaller battery packs this will jump any size vehicle, you don’t have to worry about it running out of oomph. That’s thanks to a peak power of 1500A.

On the front you’ll find three USB sockets; USB-C which can be used to charge the power pack or charge a USB-C device, a normal 5V 2A USB and a Quickcharge 5v/9v/12v socket. Making this the second ever jump start power pack feature quick charge, the first was the Ring RPPL200. 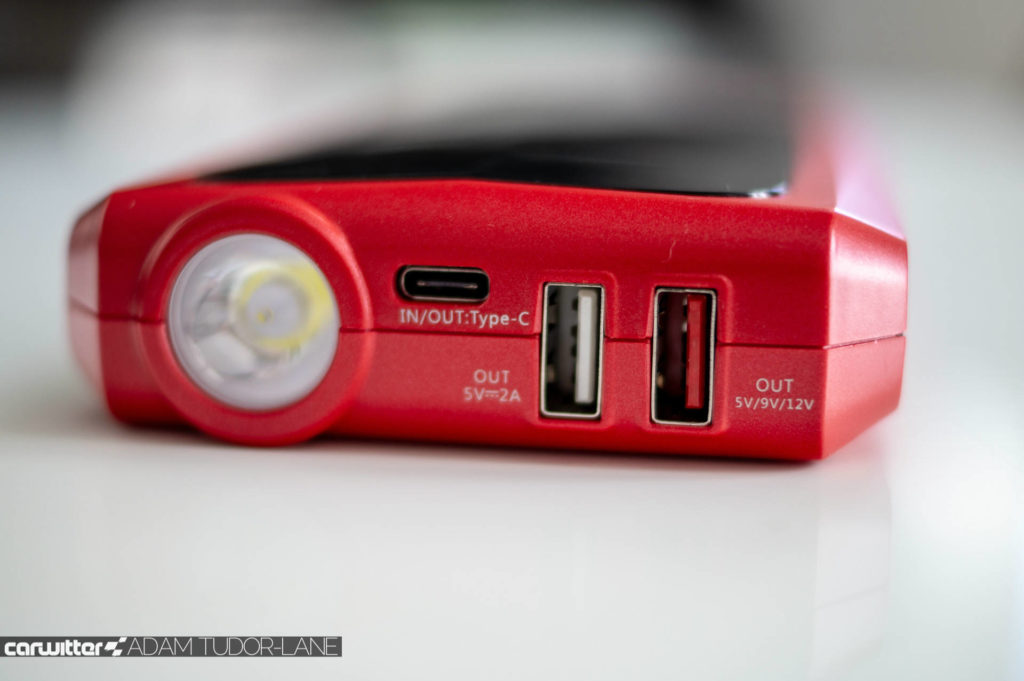 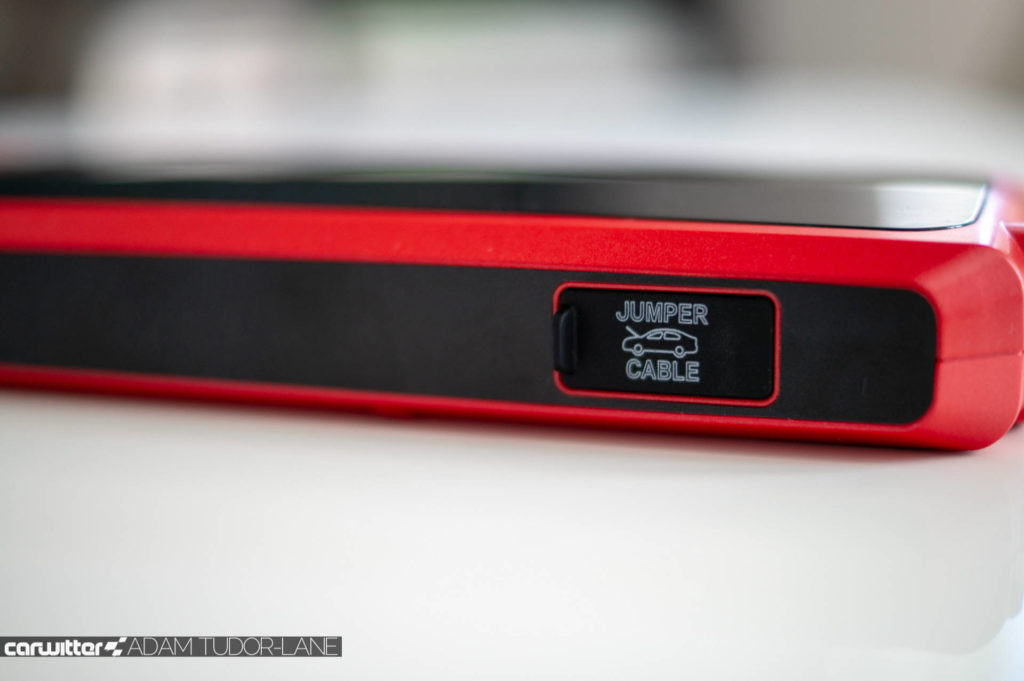 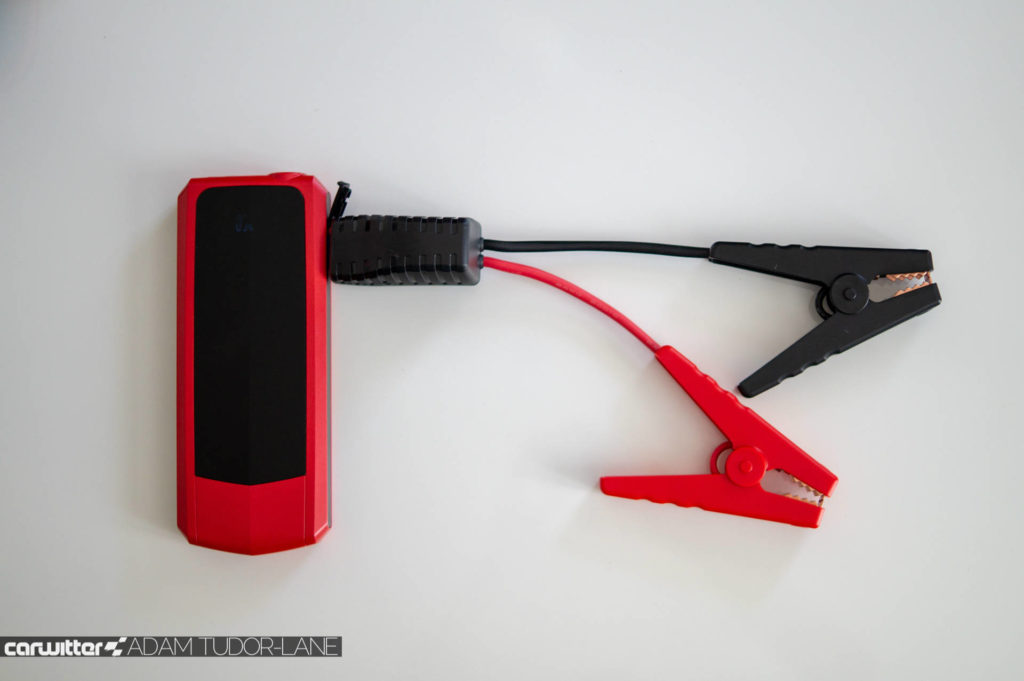 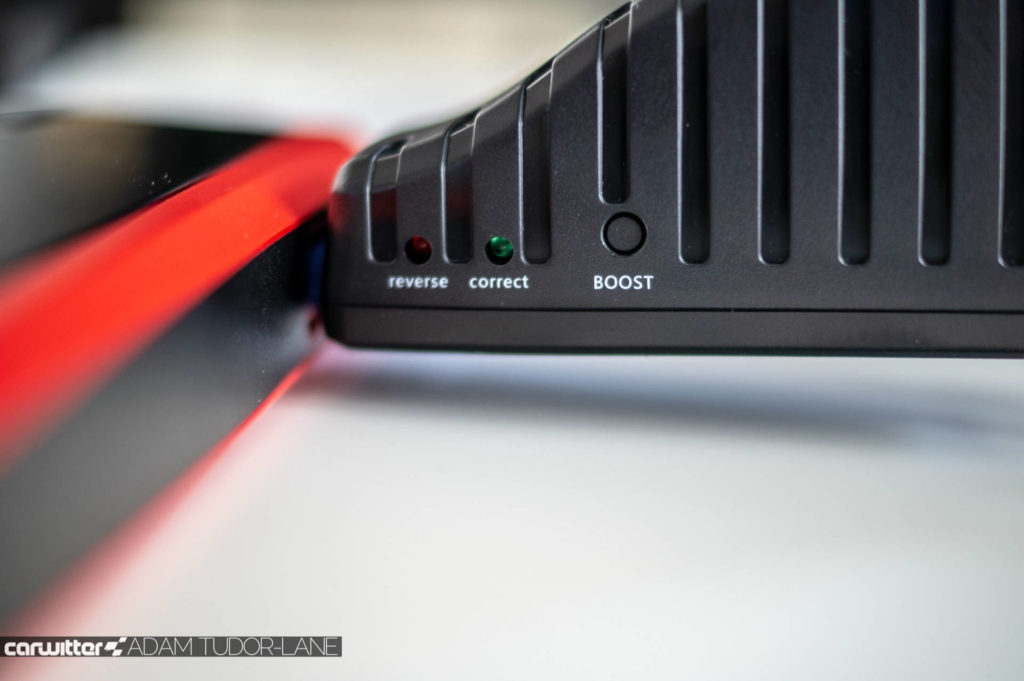 One thing we’ve never seen before though is the ability to use a 12v car socket off a battery pack. The Audew comes with a pigtail lead allowing you to use the traditional cigarette/12v type socket straight off the pack. The output is 15v 10A so should run a variety of devices with ease. 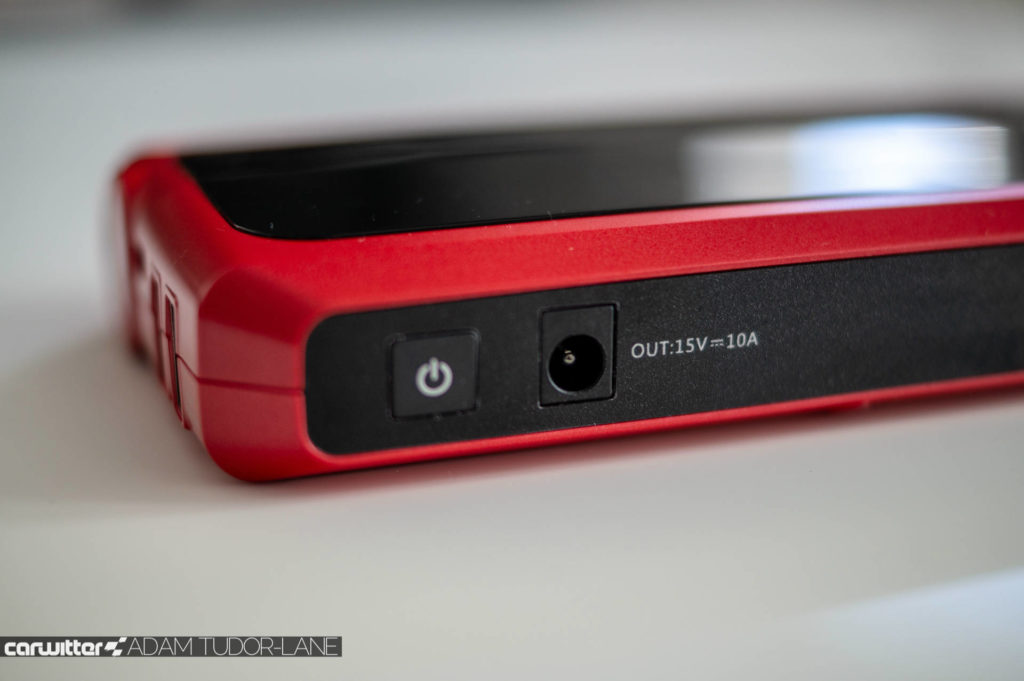 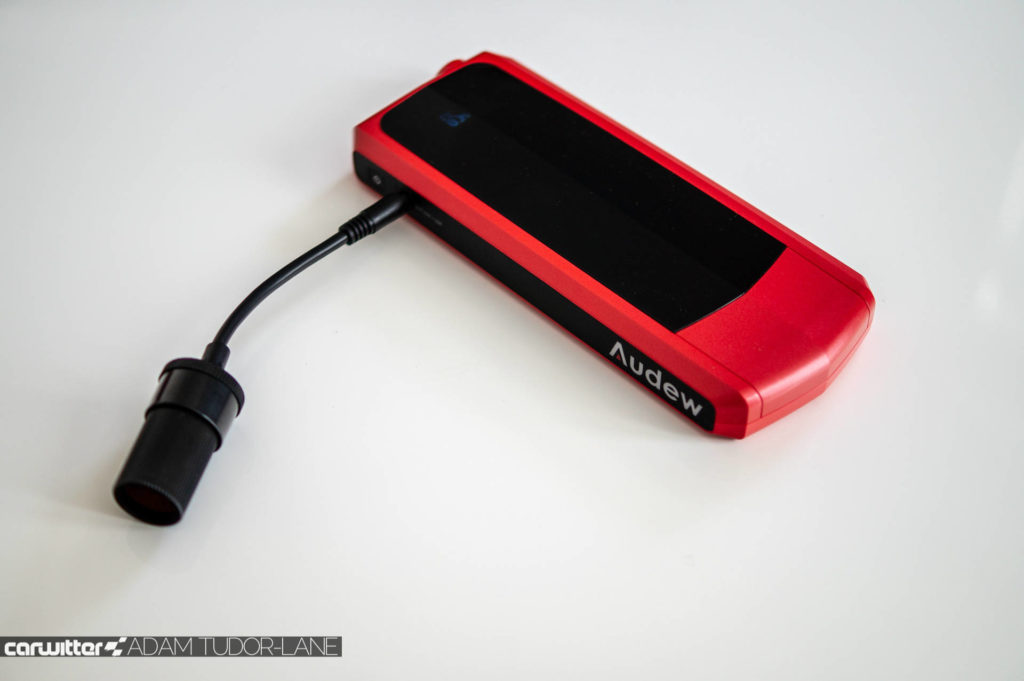 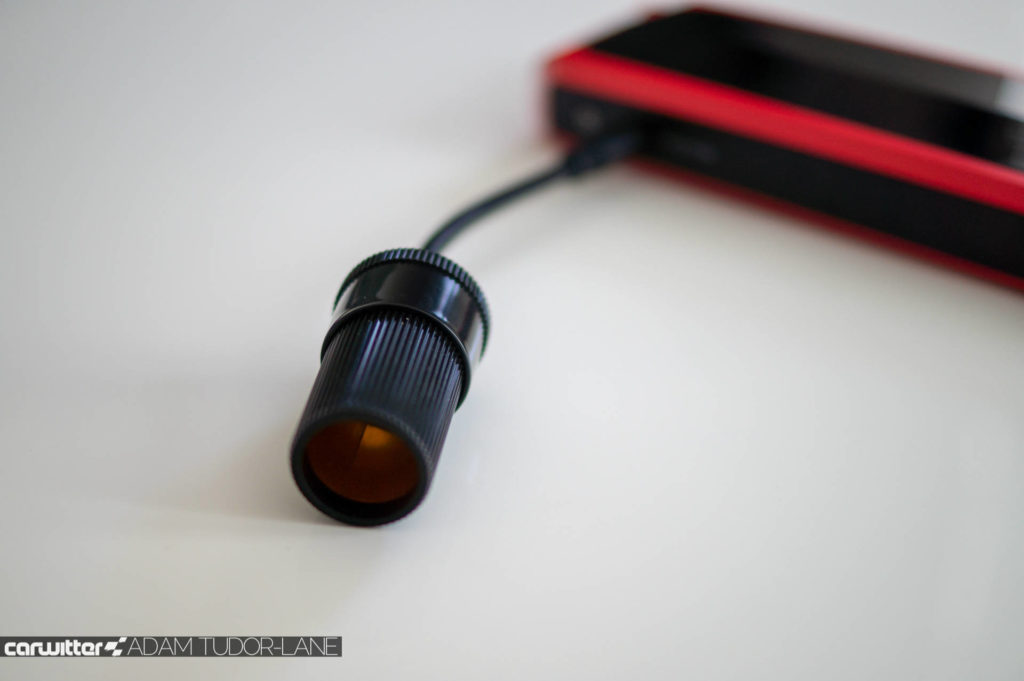 Due to its size, the pack can take a long time to charge, 4-5 hours from empty via the USB C socket.

There’s also a torch which is activated by a long press on the power button, another press will make it strobe while a further push will send out SOS. 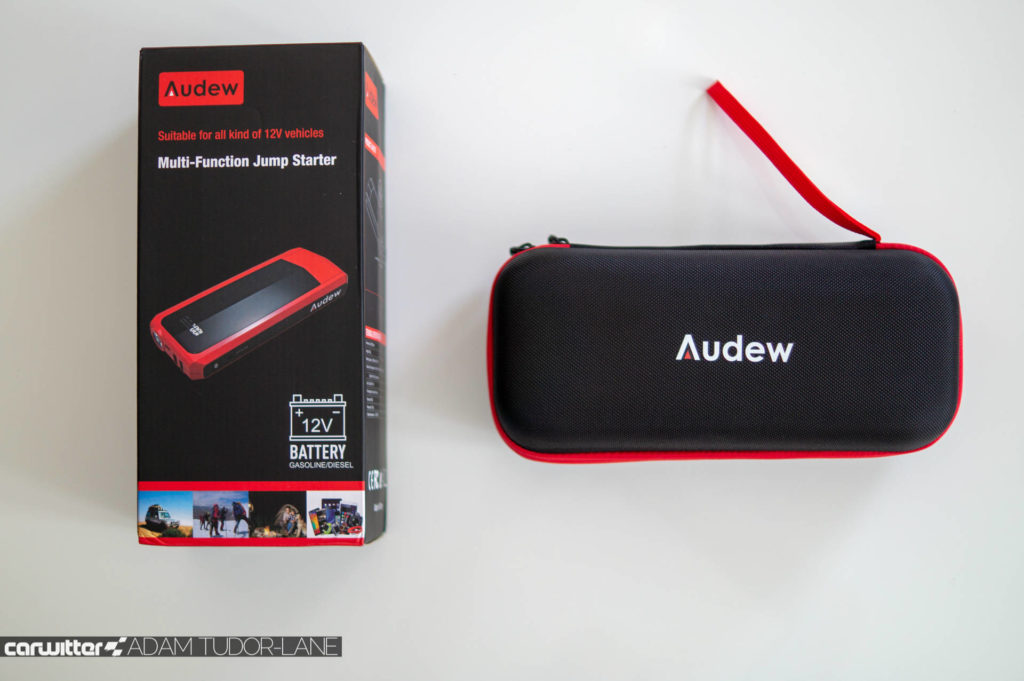 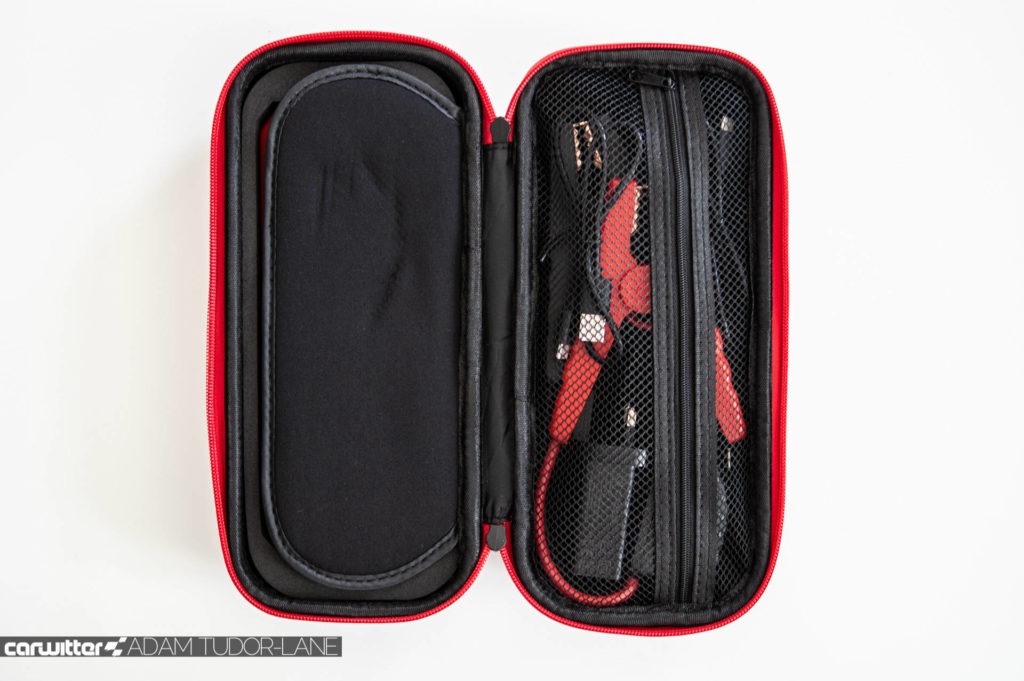 Built into the circuitry of the Audew jump starter is a starting capacity of 500A, this can be boosted to 1500A if your battery is totally flat.

To jump-start your car you simply plug in the additional jump starter block and cables. Much the same as with any smaller battery packs.

Just in case anything goes wrong there are numerous levels of protection built in; short circuit, over current, over charge, reserve charge, over discharge, over temperature, reverse connection and reverse polarity protection. 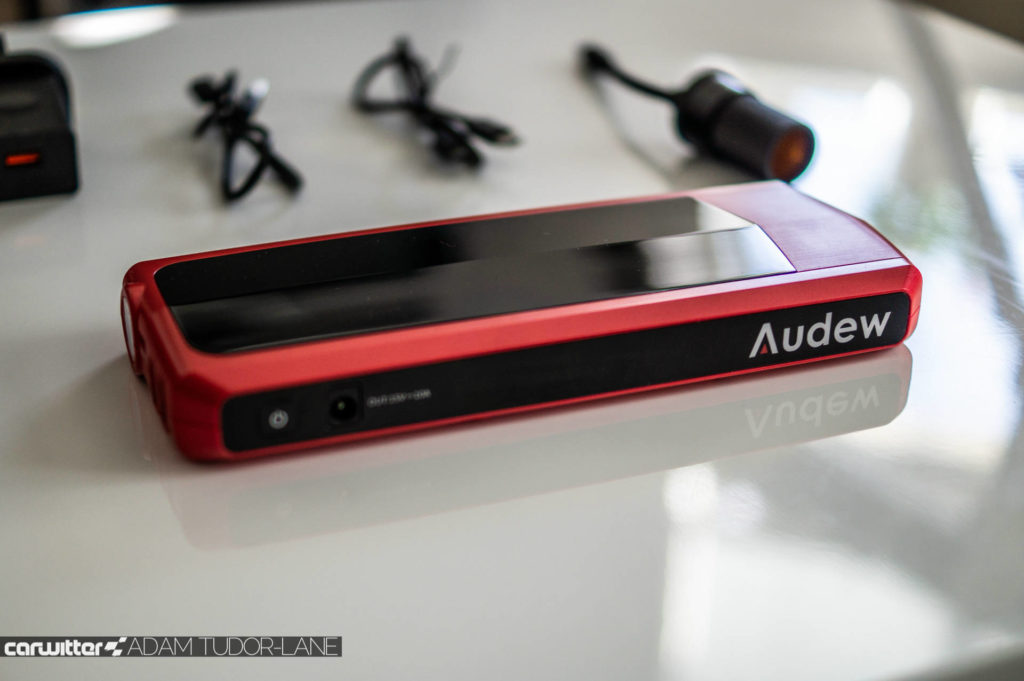 The Audew car jump starter battery pack isn’t without its niggles, but on the whole, it’s superb.

Yes, it’s a larger style battery pack. Measuring in at 22cm x 8.8cm x 2.8cm and weighing in at a smidge under 600 grams. You can still carry it around in a backpack, but it’s not as practical as some smaller power banks. Ideally, it’s probably best suited to being left in your glovebox, or taken out when you’re going adventuring and need a large amount of power on the go.

It’s exterior is made of what feels like an incredibly sturdy plastic. However, the glossy front section which hides the small LCD screen will no doubt pick up scratches along the way. 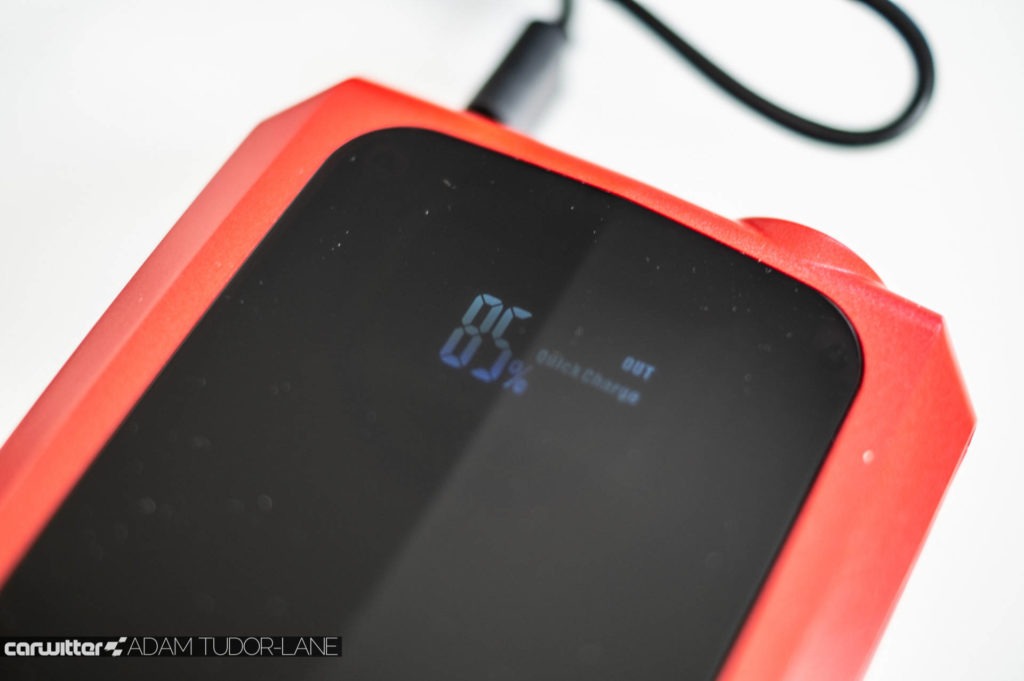 Charging two devices simultaneously is excellent, again we haven’t reviewed a jump starter yet that has that ability. Nor have we ever even seen one that allows you to run 12v devices from it, that’s genius and could come in incredibly handy.

You also get a nice padded pouch to keep the pack and all its cables in, this makes it easy to sling in the back of the car, so you don’t have to worry about forgetting that vital jump start cable, or damaging the pack as it rolls around in the boot. Another first among jump packs. 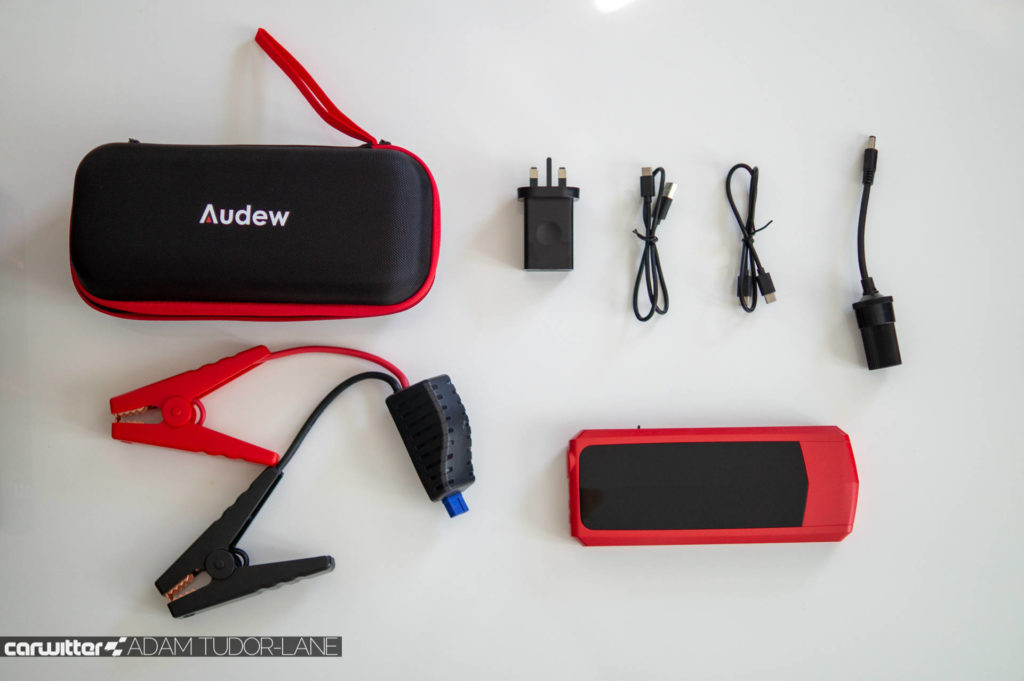 In the case, you’ll also find a USB-C to USB-C cable, standard USB to USB-C, a mains USB Quickcharge plug, the 12v pigtail connector, and of course the jump start leads.

A full charge can last 6-12 months. However, Audew recommends charging it up every 3 months. Audew reckon a full charge will allow you to jump-start a car roughly 35 times, which is damn impressive.

The jump start cables are also incredibly sturdy, they really take some force to prise open and the plastic is nice and thick. 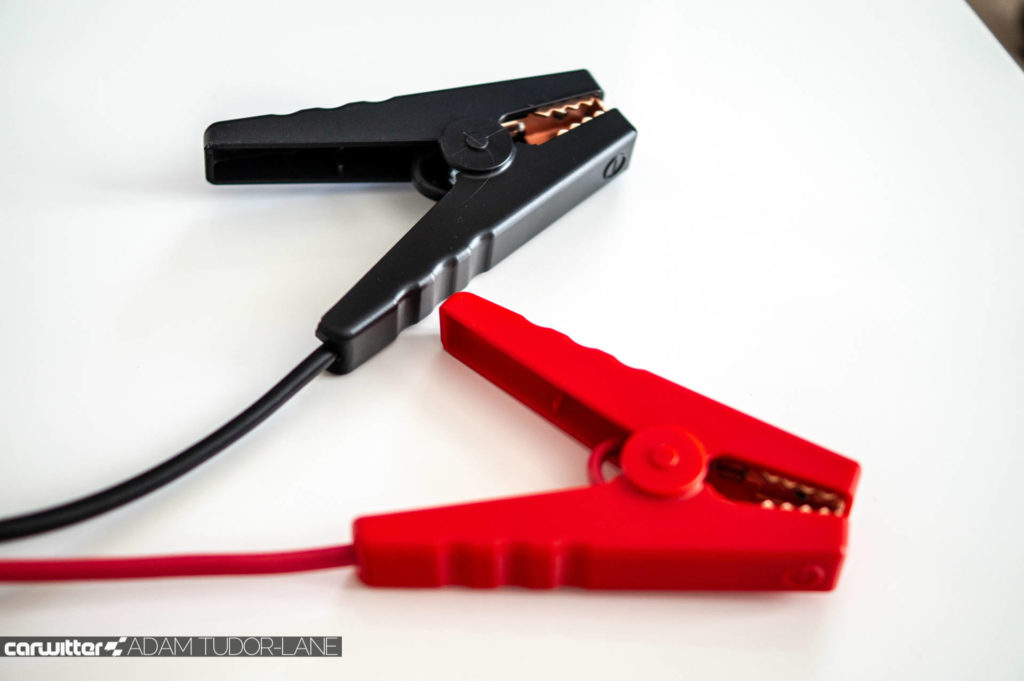 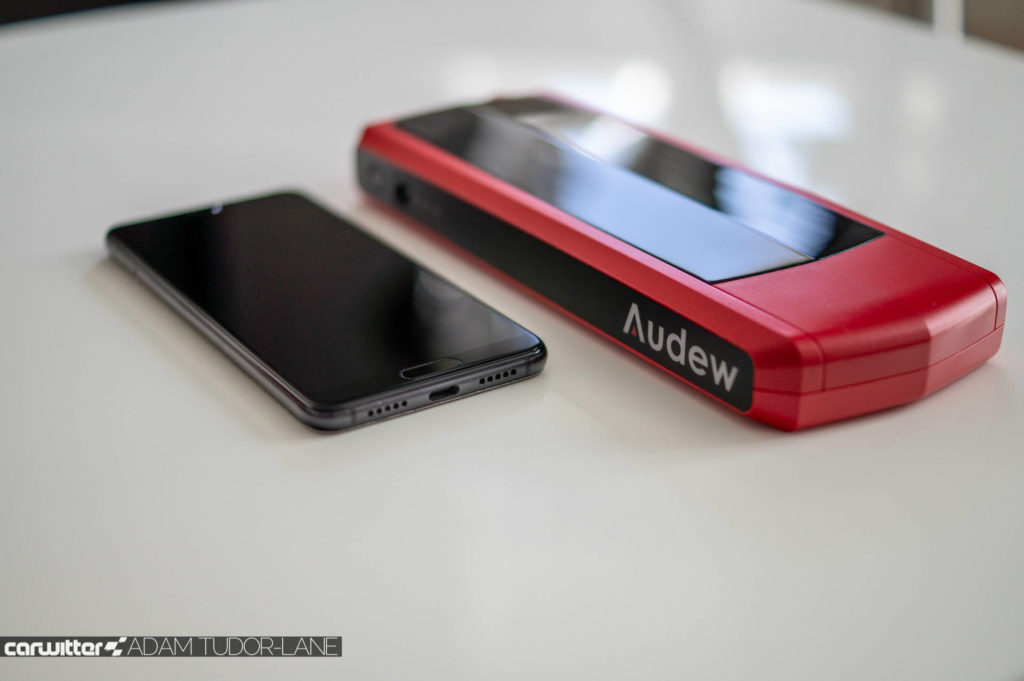 The only two issues we had are that the battery pack wouldn’t fully charge with the supplied quick charger past 88%, plugging it in with a normal slow charger juiced it up fully – just something to be aware of. The next issue was that the screen is quite dull, it can barely be seen at all head on, you have to angle the pack, and then you can see the dim LCD screen beneath the black plastic.

Apart from those two tiny niggles, the battery pack is great. Finally, someone has taken the abilities and practicality of a standard power bank and included them in a jump start pack. 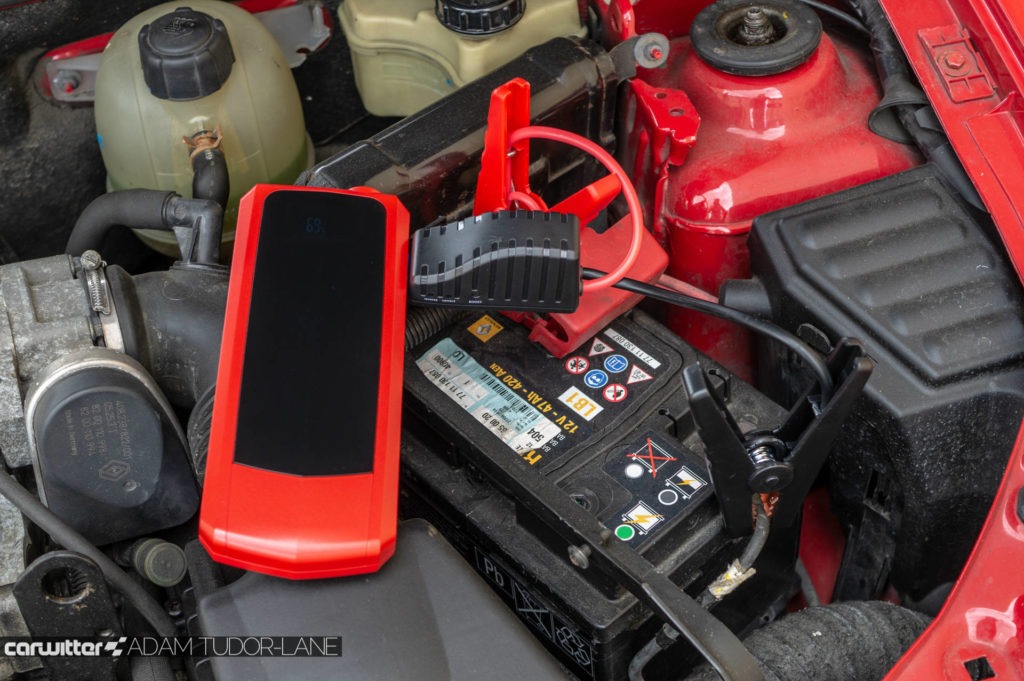 Amazon is your friend if you want to grab the ridiculously affordable 20,000 mAh Audew Car Jump Starter.

At £69.99 it makes total sense to go for one of these over an ordinary large sized power bank. Especially if you need the ability to jump-start your older car from time to time.

Oh, and it comes with a 12 month warranty as well.

The Benefits Of Car Leasing Over Buying