If there’s one genuinely underrated car brand on the market today, it’s Mazda. A small seller in the UK, I often wonder how they’re still here, but they should be doing a damn sight better and the latest 2020 Mazda 3 enforces that belief. 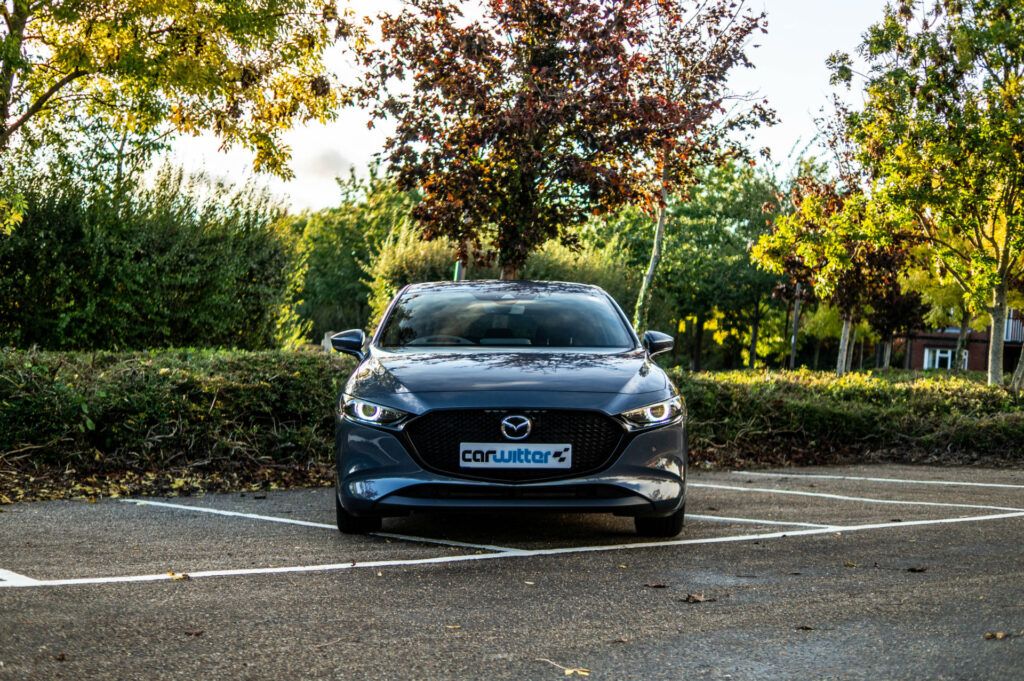 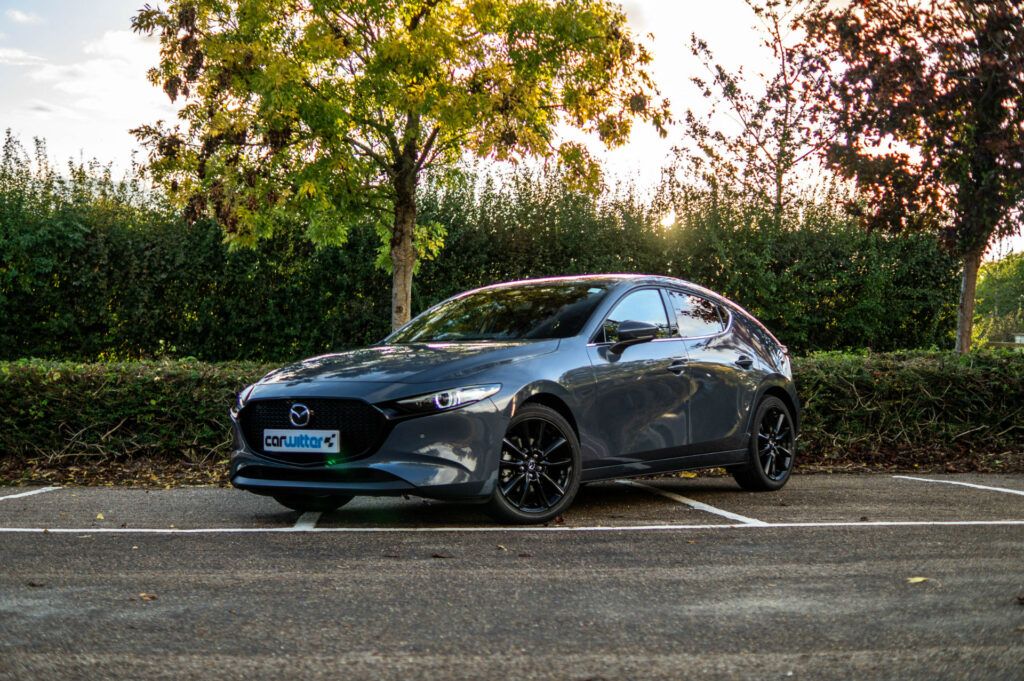 Without doubt, this incarnation of the Mazda 3 is the prettiest hatchback on the market. Looking like a shooting brake with its long swooping rear, the clear lines create something incredibly modern and sleek.

A large C pillar rear end is the only part some may have an issue with, it’s incredibly deep, and the smaller rear passenger window adds to the chunky effect.

It’s a clean design, compare it to the likes of the old fashioned looking Focus, or the dreary Golf, and you can see how modern this 3 is. 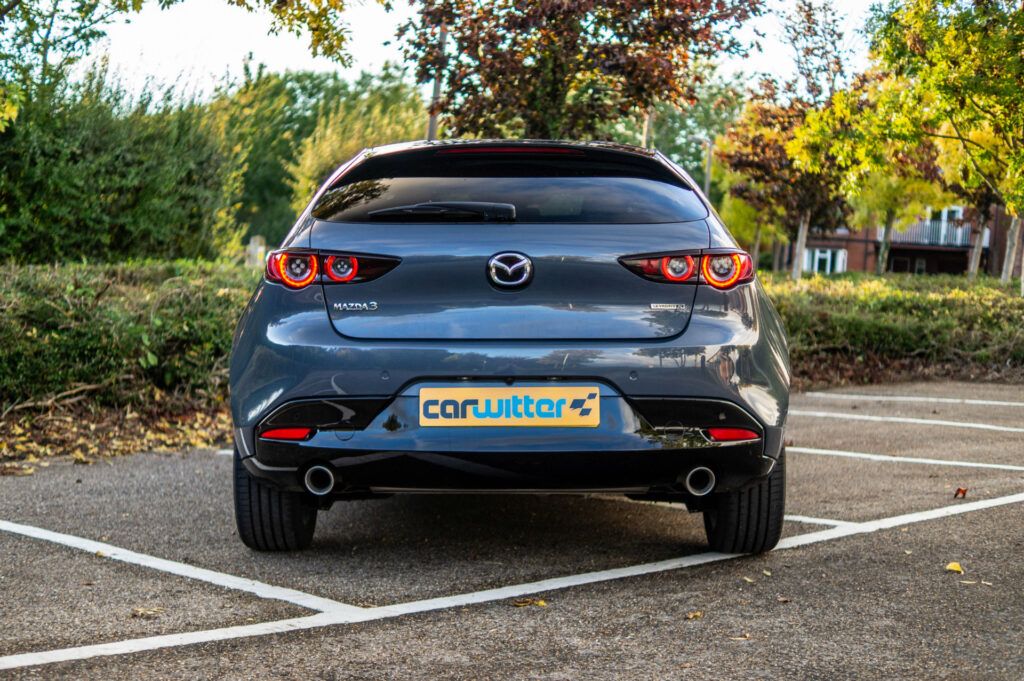 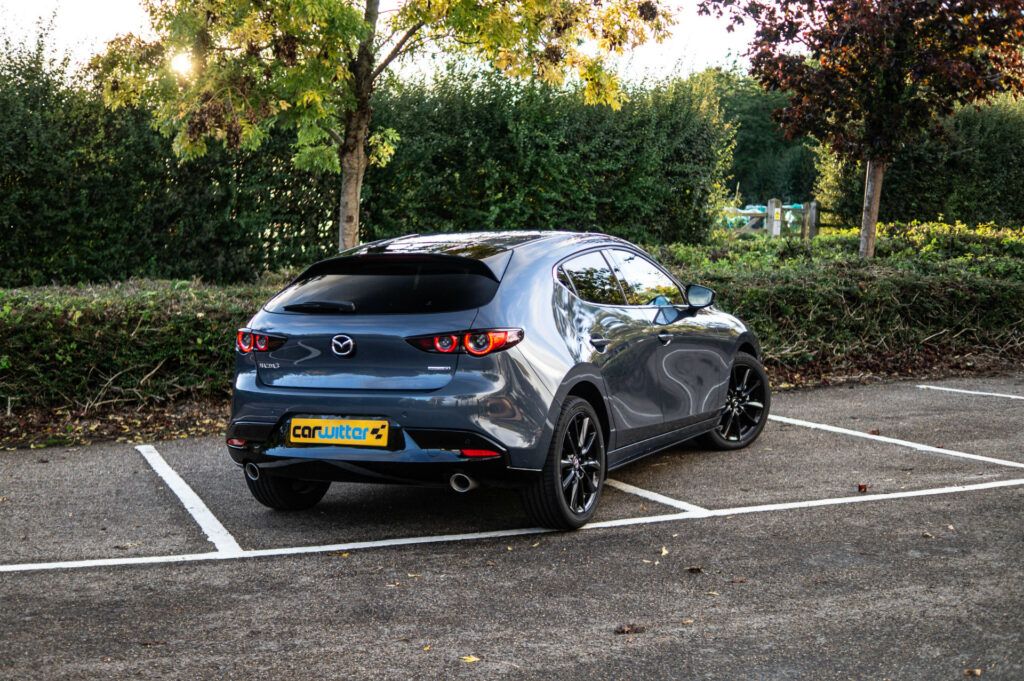 All Mazda’s drive well, they feel sporty, agile, light and have done for years now. That sweet sweet formula is naturally present in the latest 3.

Steering is sharp and precise with a nice weight to it, making the Mazda fun to handle along B roads when kept in the powerband. Body roll is slightly evident, but remains controlled and allows you to corner at pace with confidence.

What won’t inspire you though are the Toyo tyres, even in the damp taking a roundabout at a sedate 30 MPH led to understeer. When it rained things just got worse, we ended up feeling like a ballerina, tiptoeing on the pedals to keep the 3 lined up with where we want.

ESP never seemed to kick in or blink away like a guardian angel on our shoulder either. Toyo’s aren’t the best in the wet, but this seemed unusually loose for a new car. 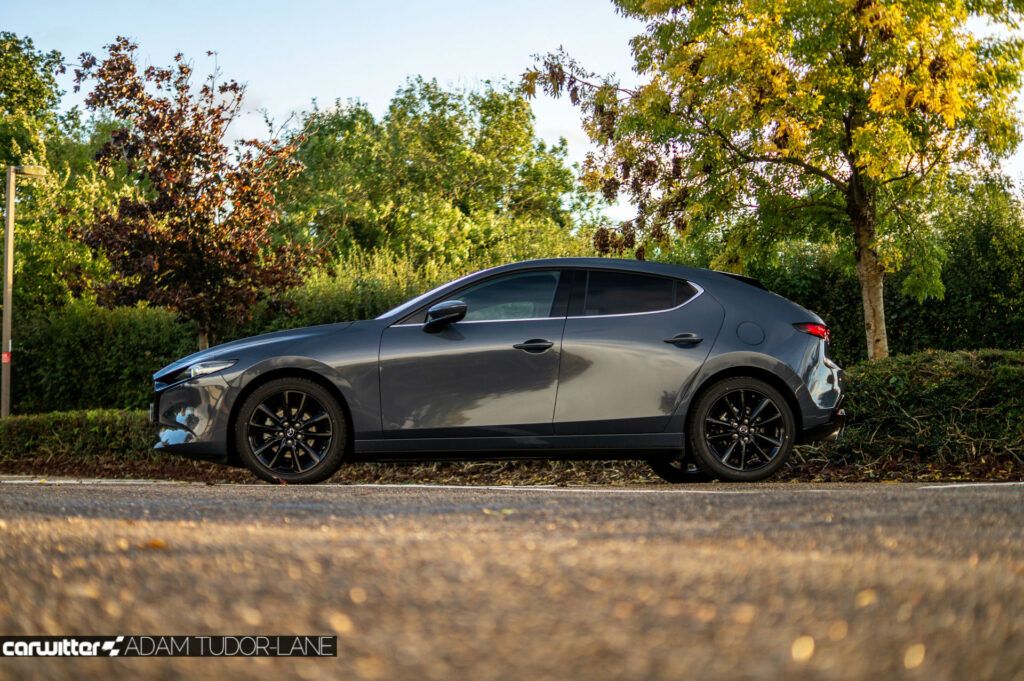 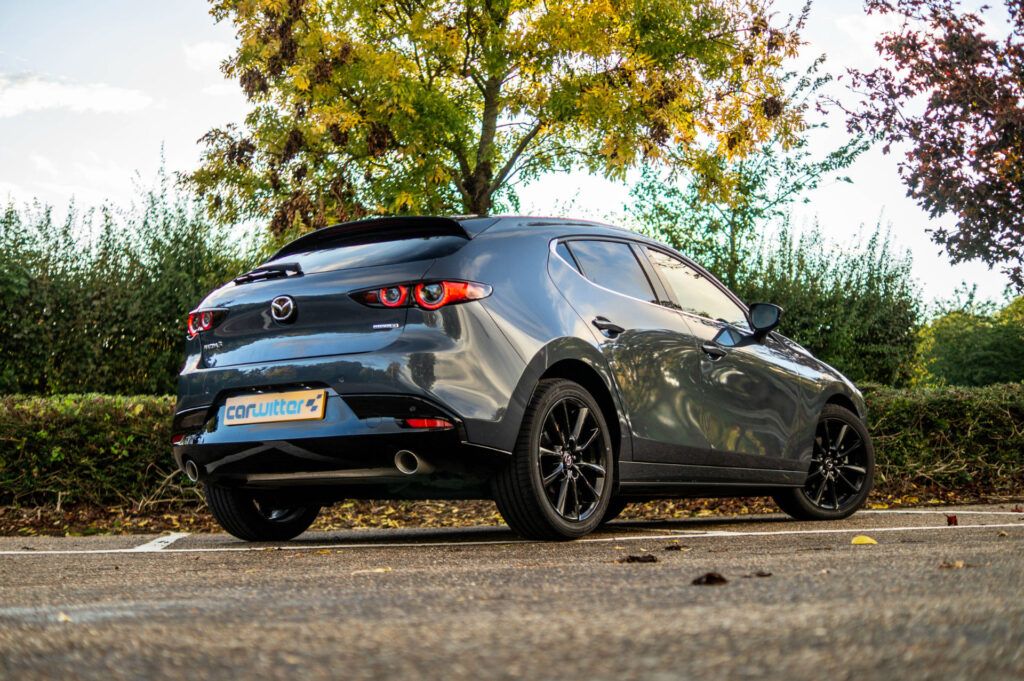 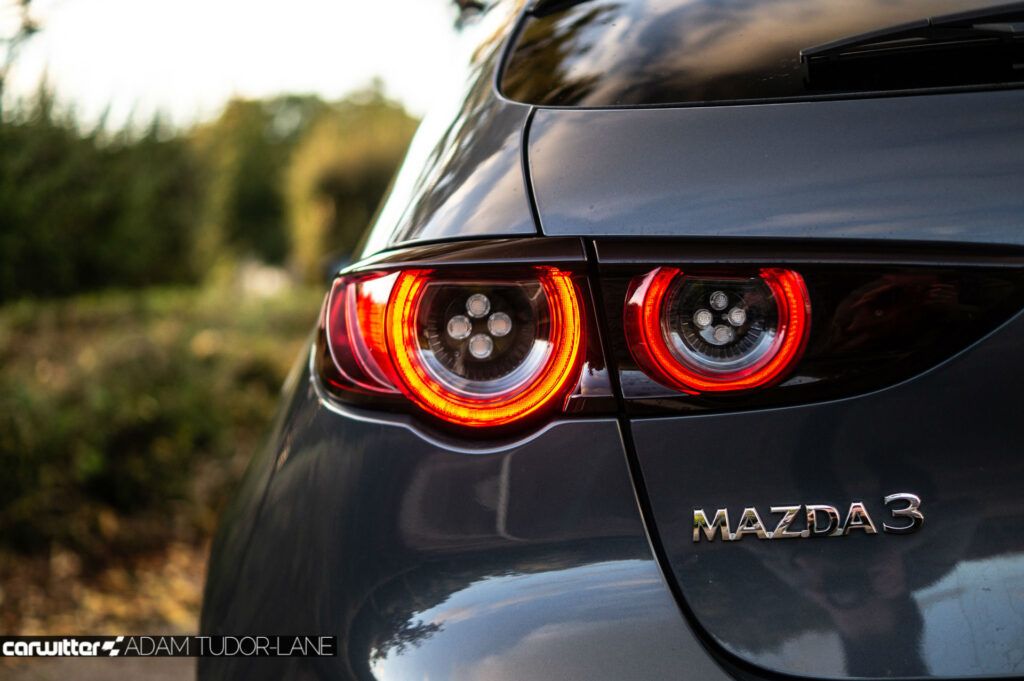 Ride is on the firmer side for a family hatch, as usual, smaller wheels on lower-spec models may help soak up a bit more of the road imperfections, but the 3 rides just fine on 18’s for us.

Fitted with the 2.0-litre Skyactiv-X engine, power is up at 177 BHP which sounds nippy, especially when you see the 0-62 time of 8.2 seconds. But you see, Skyactiv-X is all about the miles per gallon, so even though it sounds like a large engine, and the power is decent, it’s almost detuned for efficiency.

Acceleration and power are linear, there’s no vast globs of torque, and while the delivery of those horses is reliable the 3 seldom feels ‘sporty’. On the plus side, over 200 odd miles of mixed driving and the MPG figure stood at 48, that’s pretty damn good for a 2.0-litre petrol lump.
A tank managed 368 miles, and our total MPG figure came in at a very respectable 43. 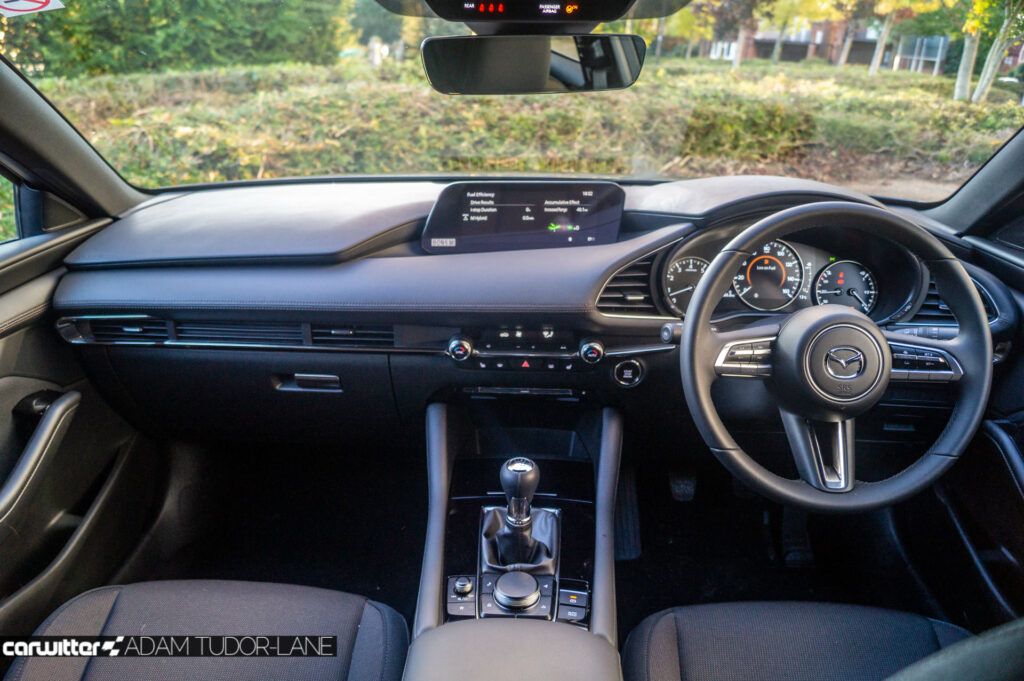 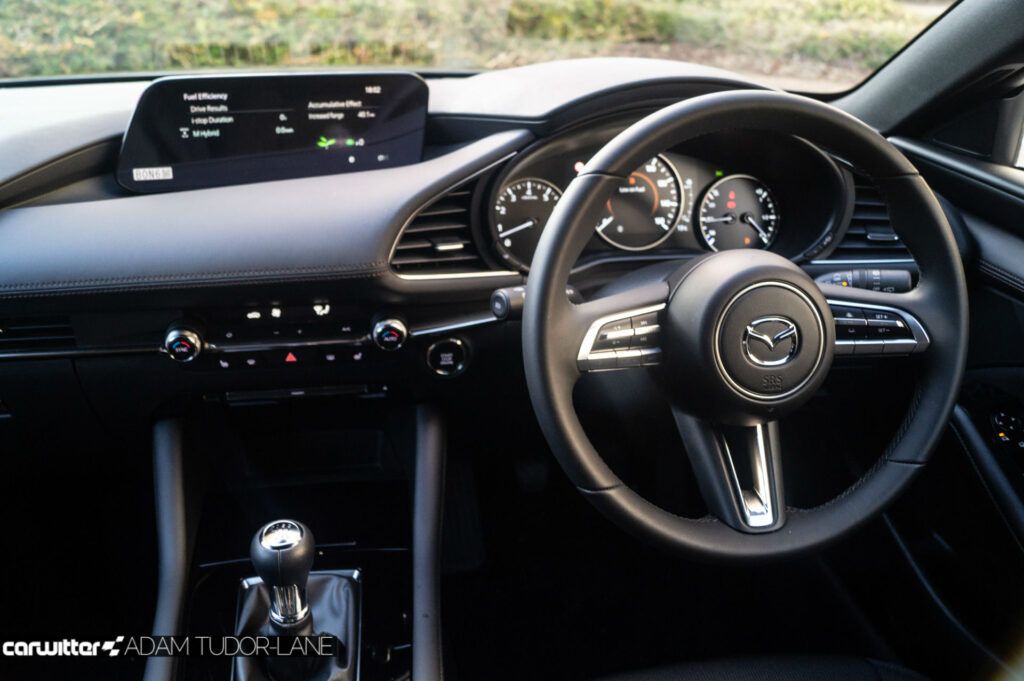 Mazda interiors are on par with the likes of Audi and Mercedes. There you go, I said it. I’ve never been particularly impressed or enamoured with either of those German marques for their interior fit and finish. Yes it’s good, and it’s a step up from a VW, Ford or Skoda, but then it should be as you’re paying more for the car.

With Mazda, you don’t. You’ll pay the same but get a far superior, higher-quality interior than what Ford can offer.

Buttons, dials and switches give a resoundingly solid click when interacted with, they all feel solid with a nice weighting. The entire dash top is soft to the poke, and there are splashes of brushed chrome around the vents and on the doors – the handles are cleverly hidden in with the brushed silver trim. 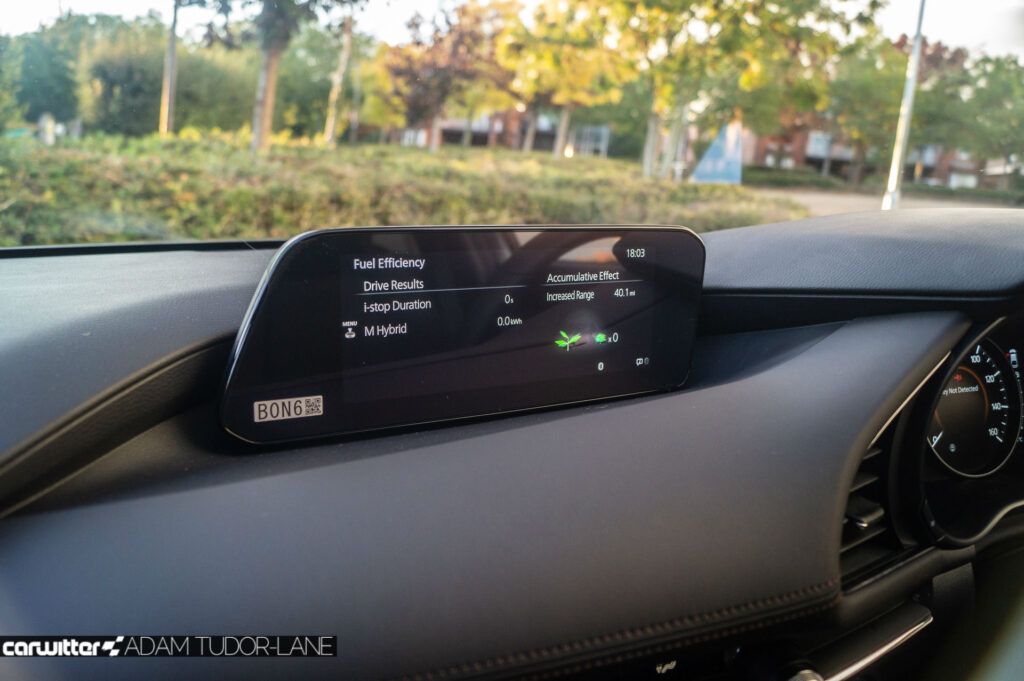 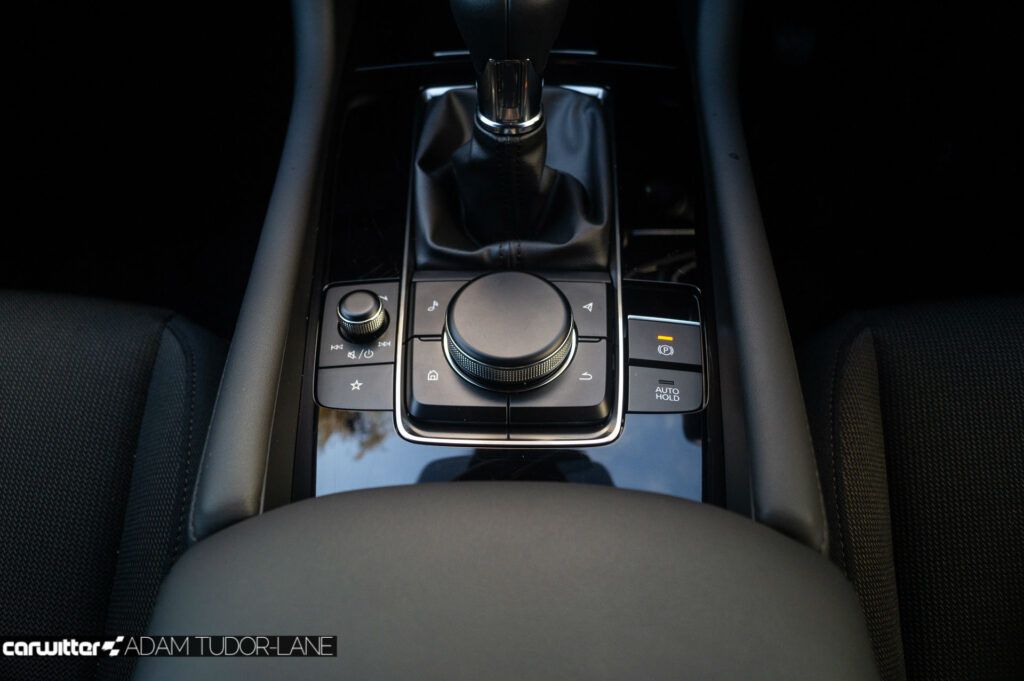 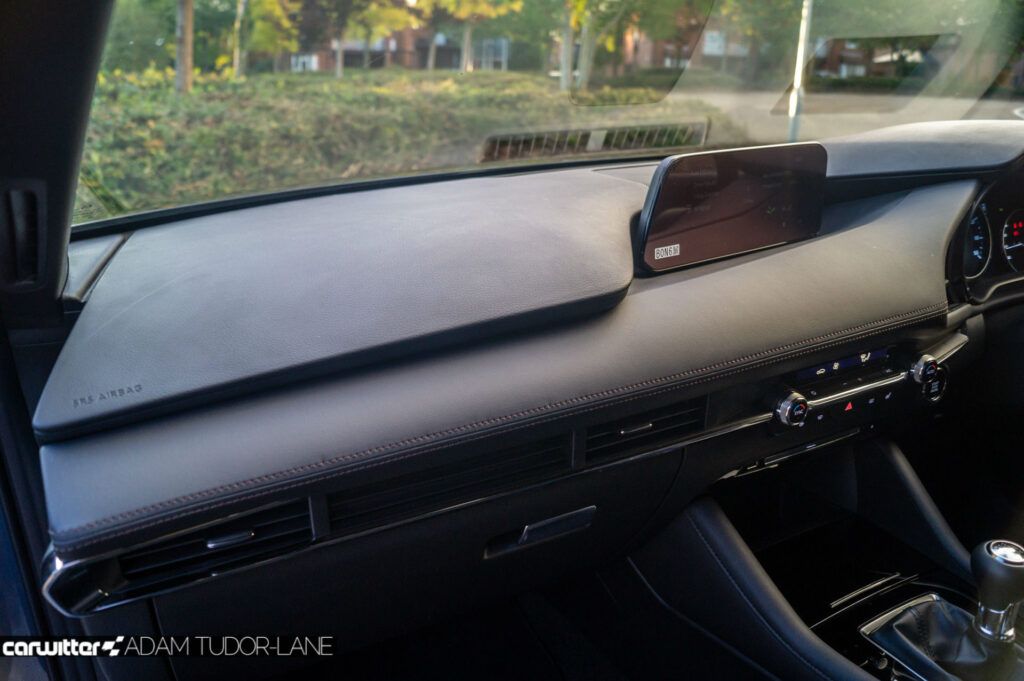 There are no touch screen shenanigans as with all Mazda’s, you control everything via the large jog wheel in the centre console. It’s far more straightforward, safer and easier than a touchscreen system and should be lauded for those reasons.

An 8.8-inch widescreen central display is subtly perched on the dash, its borders are nearly jet black so you can’t see where the screen starts and ends – Alfa Romeo take note. All the graphics are gorgeous on the eye with menus being clearly laid out and super slick to flick through.
Below you find the HVAC controls that meld into the dash, their white digits clearly popping when the system is switched on. 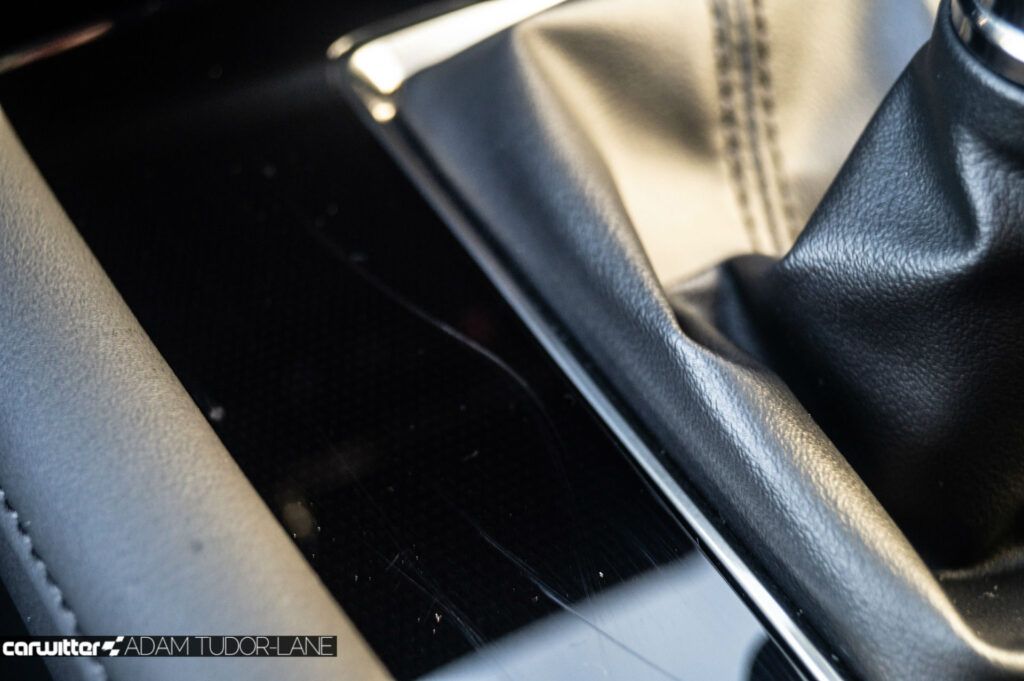 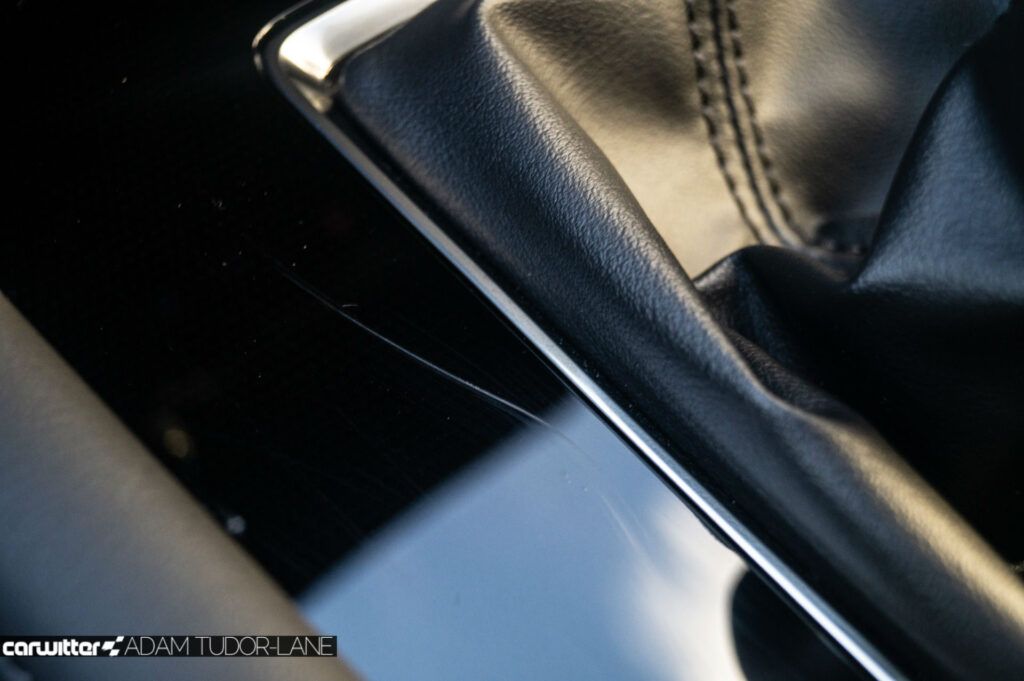 The only real nag is the gloss black plastic on the centre console, our car had but a few thousand miles on it and already it was scratched to hell. There should ideally be one of those ‘self healing’ paint protection film coatings over these bits, as you can imagine how bad they’re going to look in 30,000 miles, let alone 60. 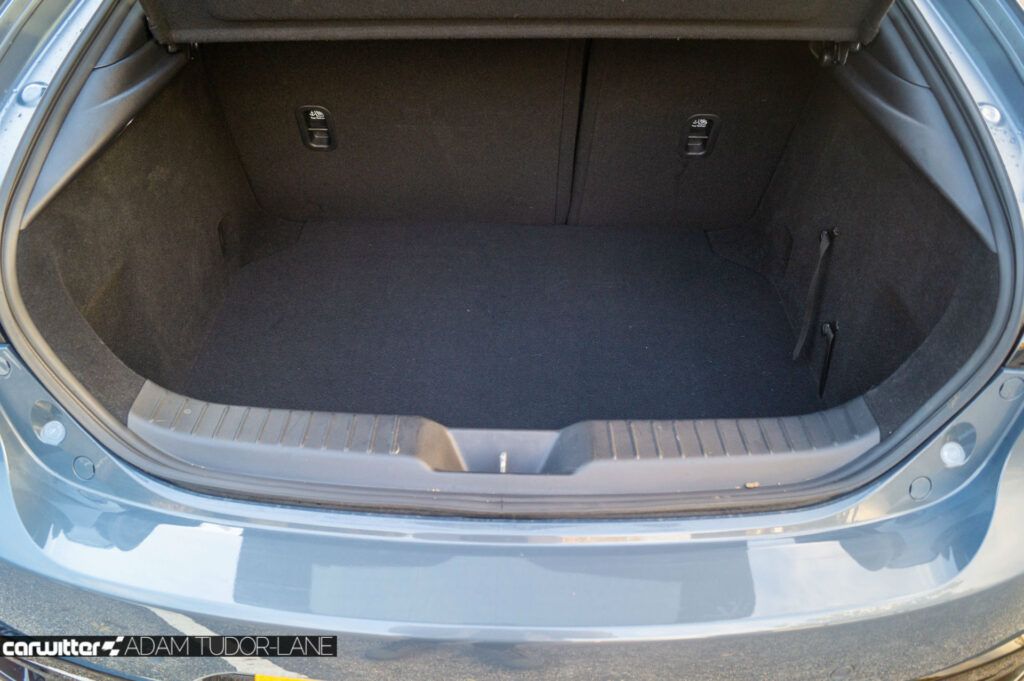 Rear seat legroom is very good for a car in this class, but headroom is on the low side due to that sweeping roofline.
Boot space measured in at 358 litres, so less than a Focus but that can be forgiven overall. However, there is a deep lip that could make getting large, heavier items in and out of the boot trickier.

Even though our model was the £25,640 Sport Lux model, it still had cloth seats, albeit heated. If you want leather be prepared to fork out for the GT Sport which is one below the range-topper and comes in at £27,440.

Our pick would be Sport Lux with the 2.0 Skyactiv-X engine, it will give you the 18-inch alloys, LED headlamps and keyless entry. It’s middle of the range and hits the sweet spot in terms of affordability and features. 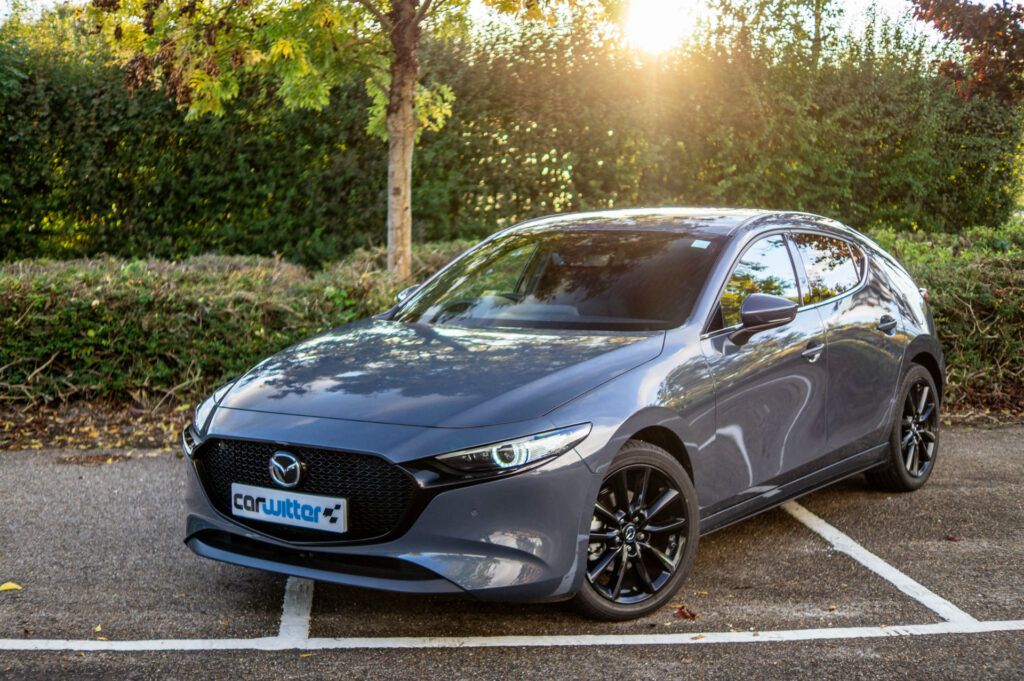 If I was in the market for a medium-sized hatchback, the 2020 Mazda 3 is where my money would go.

Style, build quality, handling and economy are all ticked. Personally, a hotter version with a bit more shove would be ideal, but that’s not what Mazda are about right now.

You won’t currently find a better hatchback for your money. Drive a Mazda 3 before you dare even think about a Focus or a Golf. 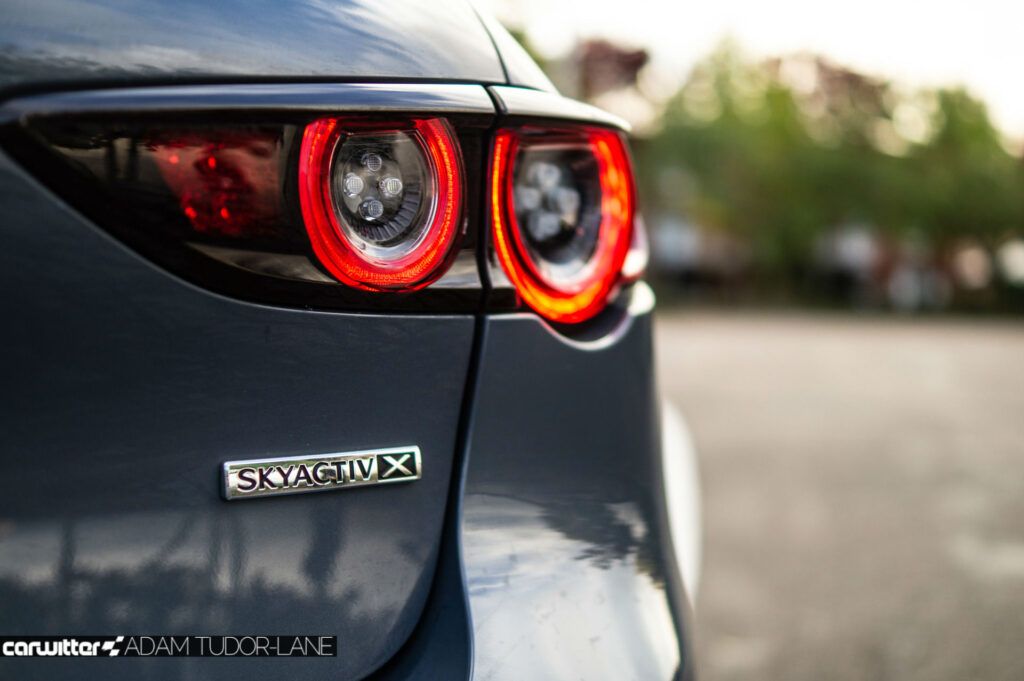 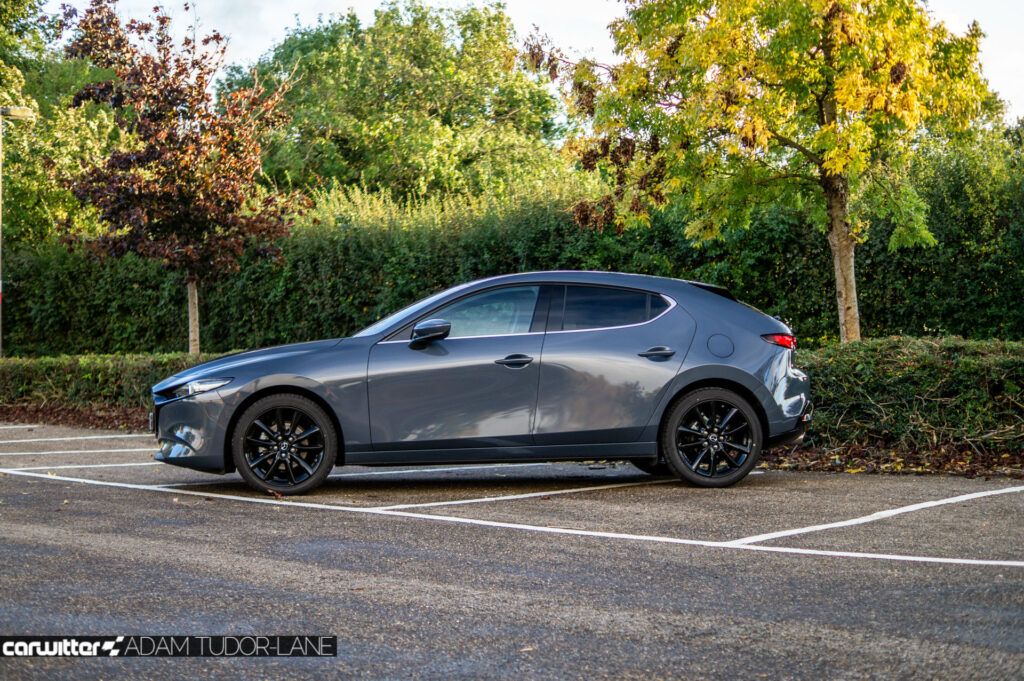 Winners and losers in the 2020 UK car market