Seemingly time has worn on, and Honda has seen fit to give the Civic Type R a facelift, honest, there are new bits!

On the plus side, they’ve made a stripped out, raw version called the ‘Limited Edition’, the bad news is that they made only 100 worldwide, 20 were coming to the UK, all sold out within nanoseconds.

More good news is that we’ve driven both, and this is what they’re like. 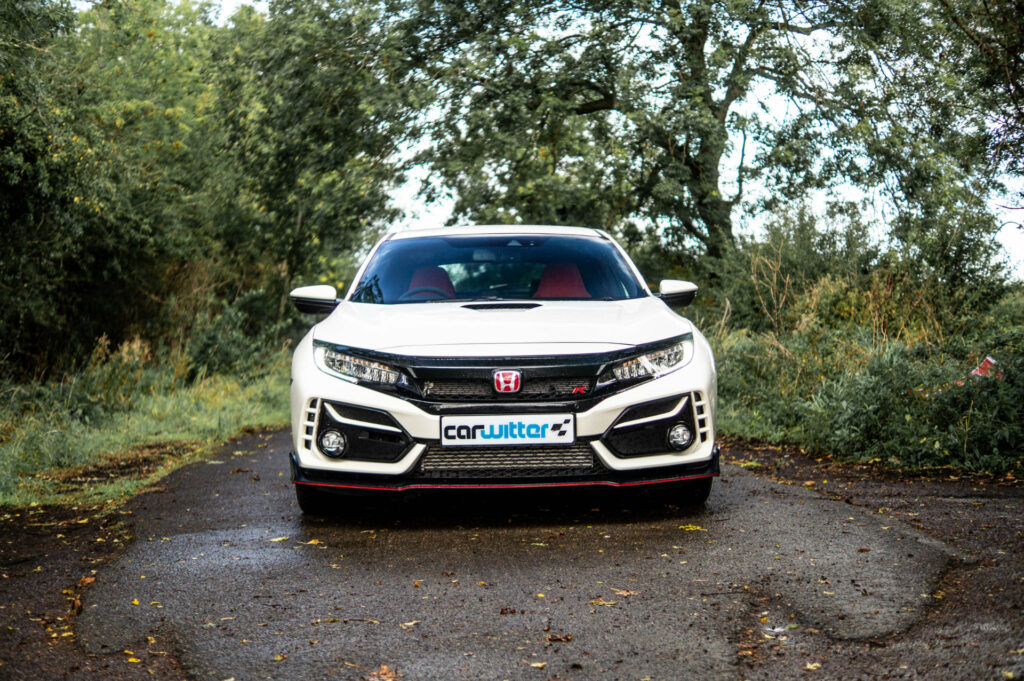 No doubt you’ve already spied that 13% larger grille up front, well done. That does actually help reduce coolant temps by 10% on track days, because every Type R owner does those on the regular.

There’s also a new teeny tiny piece of plastic trim to break up the low fog light surrounds. That same little addition is mimicked in the rear low cut outs too.

And that’s it. Genuinely. 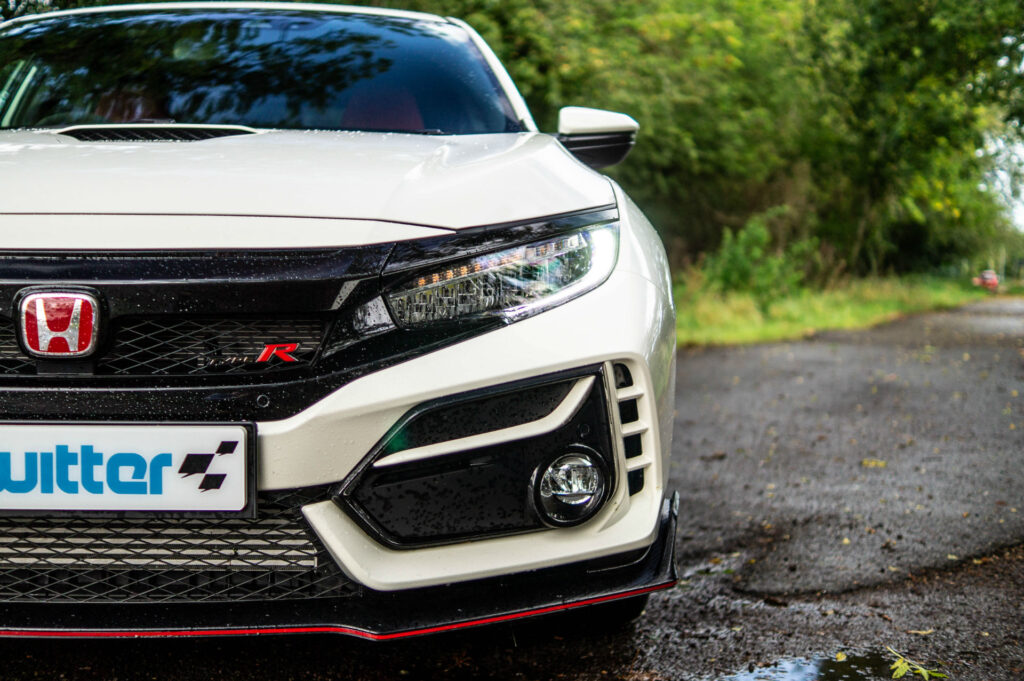 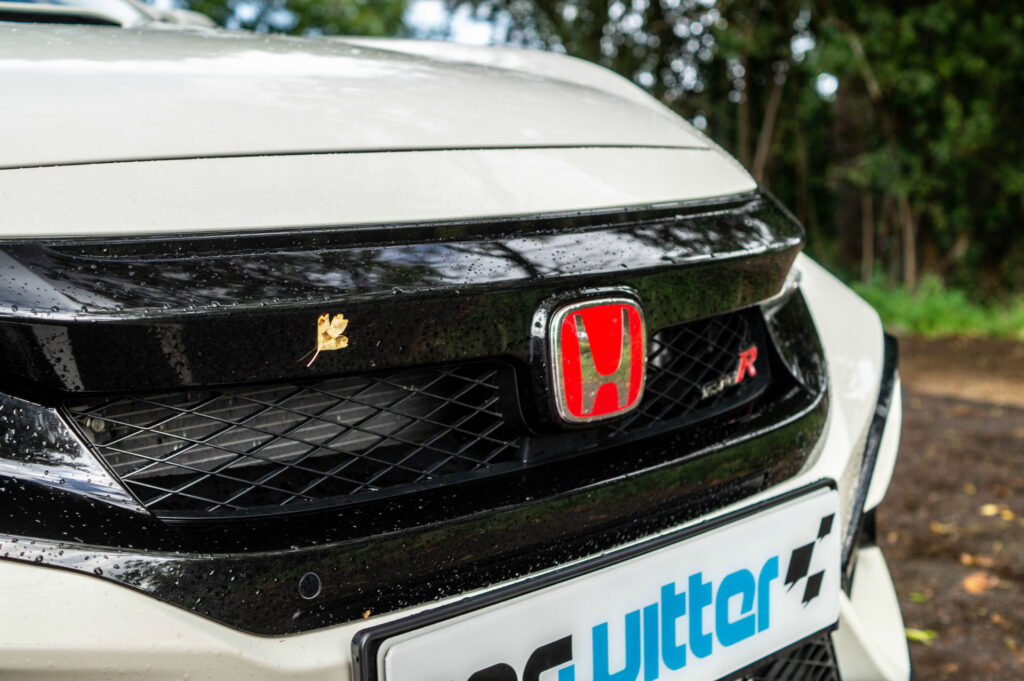 I’m being a bit harsh there, as a raft of changes are actually under the skin. There’s new two-piece floating brake discs which reduce unsprung mass by 2.5kg all while reducing brake fade. The clever techs have also removed 15mm of excess pedal travel.

To combat a slight reduction in downforce due to that new, bigger grille the front under-bumper air dam was redesigned.

Rear bushings on the lower arms have been stiffened, giving an eight per cent improvement in lateral loads, while the front sees new bushings and lower friction ball joints to help make the steering even sharper.

Inside you’ll find a new alcantara steering wheel, and a weighted teardrop shaped gear knob, much like the Type R’s of old. Both add to the aesthetic ‘specialness’ when you’re in the pilots seat.

So it’s very much tweaking the minutiae with this 2020 model.

Ah, but there is a whole new Type R model, the Sport Line. Think of it as a toned-down version of the Type R. The big wing has gone in favour of a lower deck version. There’s now a grey style line down the lower skirt instead of red, and more soundproofing in the boot and tailgate. Inside is also somewhat muted with black bucket seats. 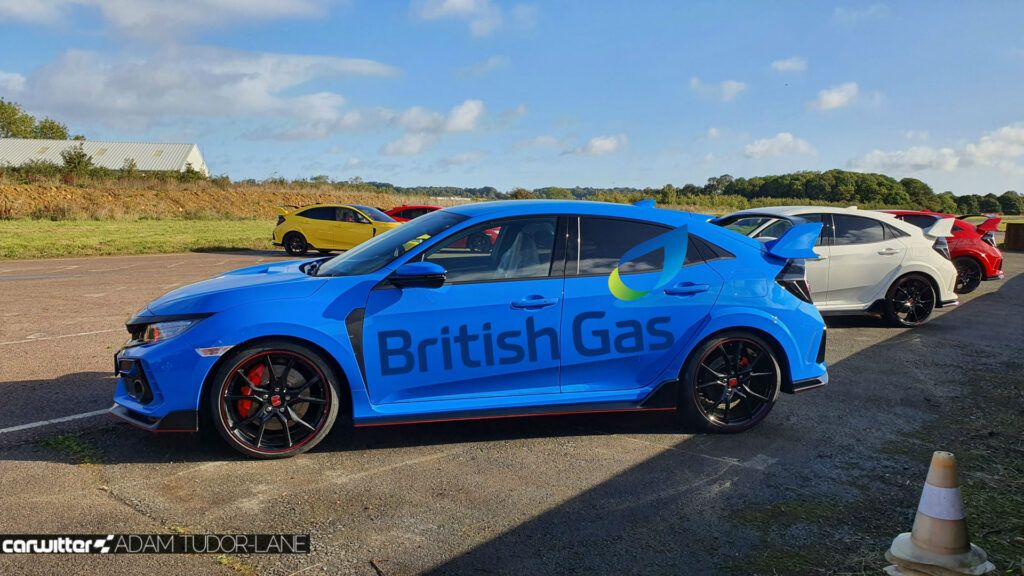 Oh, there’s also a new colour ‘Boost Blue’ aka British Gas blue. No doubt following the trend of quick blue hatchbacks started with Ford and followed on by Hyundai. 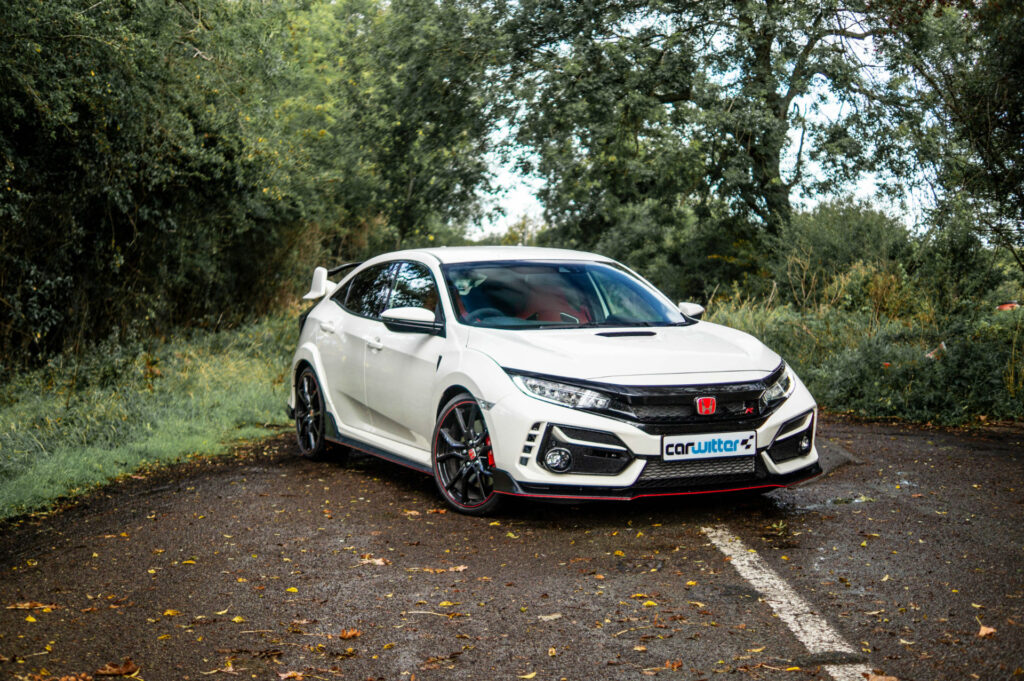 Yes, I’ve said it before that the FK8 isn’t as raw and pure as the FK2. I stand by that, as I’ll get on to later. But there’s no doubting the ferocious pace, handling and togetherness of the current Civic Type R.

I was thrown the keys and headed out on a two-hour road route with the journey starting off on some of the most open, flowing roads the Cotswolds has to offer. What an epic first half-hour, twists and bends with long flowing views meant stretching the legs of the Type R. Even when hitting the limits the road can take, you still feel like you can reign in the Civic in an instant.

Turn-in is crisp as ever, I wouldn’t be able to tell you if it’s become even pointier, so just take their word for it.

Ride is a little more focussed for the type of machine it is, it felt a little too comfy last time without the active dampers on. Switching between the two is still hard to tell apart, you really have to concentrate to spot the switch over, or be ‘on it’ to see the difference. 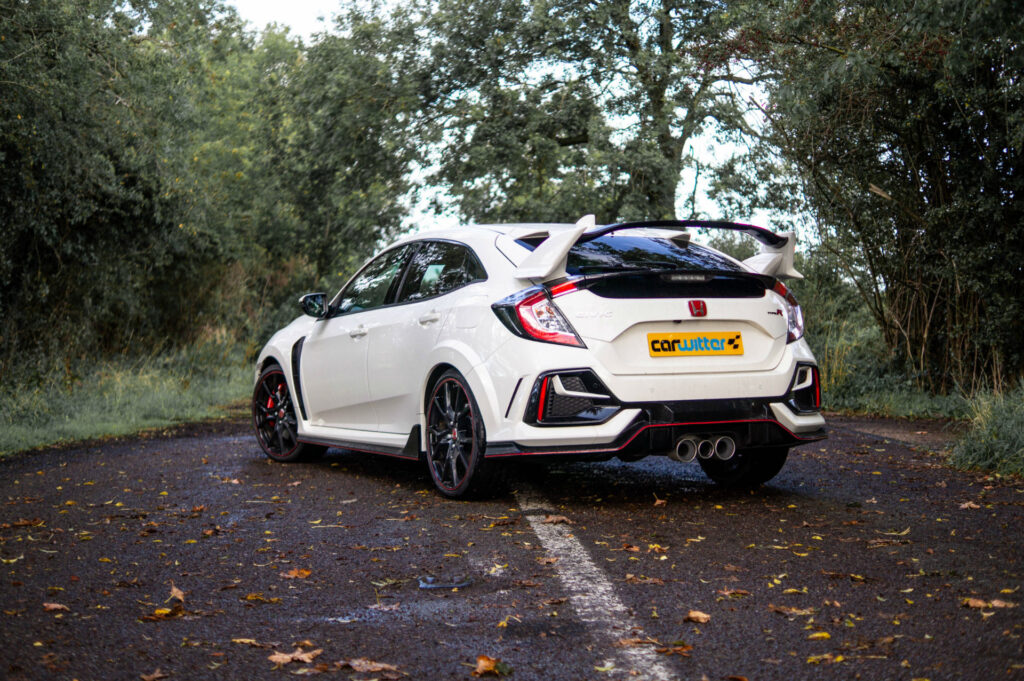 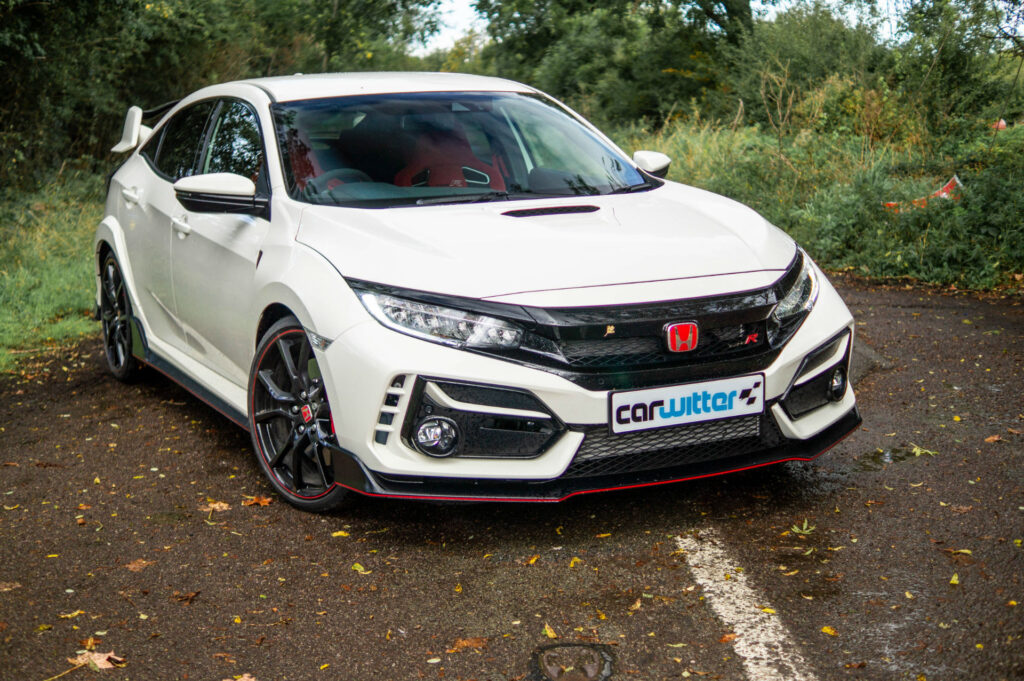 Dry grip is sublime, it’s incredible for a front-wheel-drive car to get such power down in a controlled manner. As the day progressed, traditional British autumn showed up, which meant my time on track was now a damp affair, not wet mind.

Here’s where that difference between old and new still shone through for me. Clambering into the old FK2, I was more than excited to get behind the wheel of one of these again. 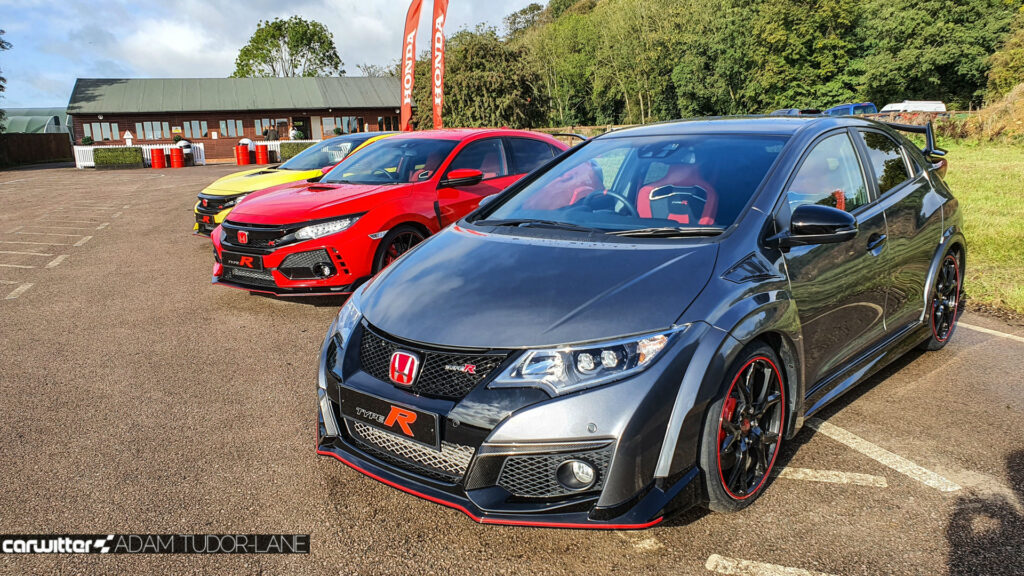 Five to seven laps were had in it, then it was straight into the current FK8. While its urgency feels a little more ferocious, no doubt due to torque, the FK2 is still the tighter, lighter feeling, raw machine that is the epitome of hot hatch.

It also got the power down far better in the damp, no scrabbling or traction control flashing, it just gripped and pulled out of the corners, the FK8 just couldn’t seem to get the horses down as quickly through that damp surface. Tyre difference, maybe. 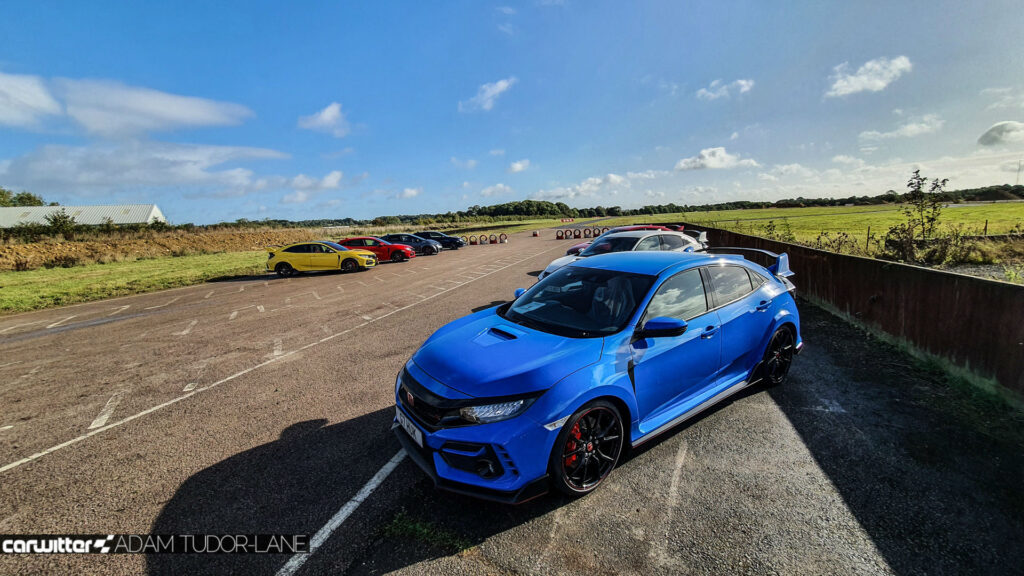 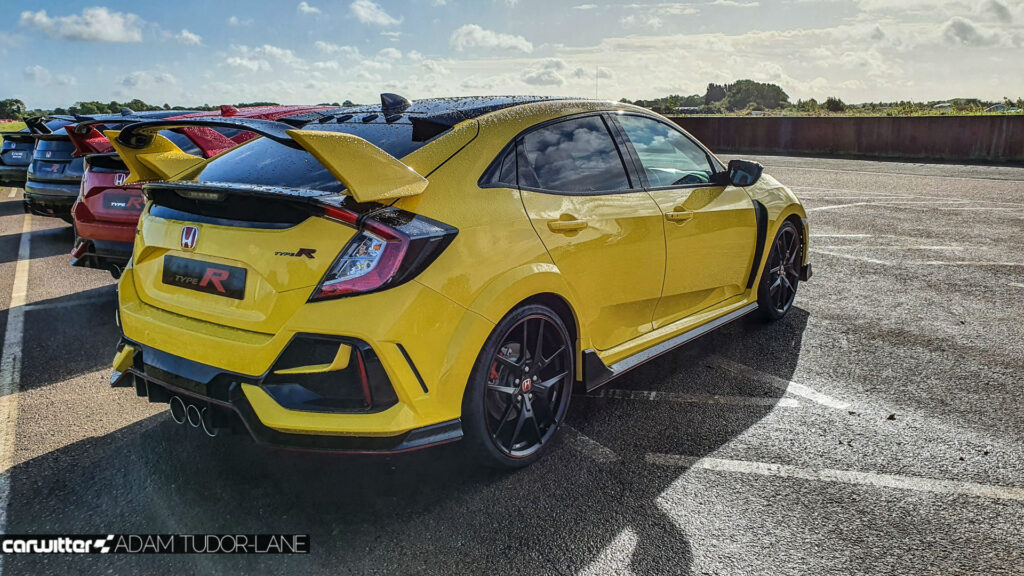 I also got track time in the £39,995 ‘Limited Edition’. Available in only ‘Sunlight Yellow’ it sits on lightweight 20” BBS alloys shod in Michelin Cup 2 tyres, different dampers and a recalibration of the EPAS to give maximum control.

Sound-deadening material in the roof, rear hatch, front bumper, and dash have all been removed along with the infotainment and air-con. Overall it’s 47kg lighter but still has rear seats…a removable option would’ve been excellent here.

Power output is the same, and the 0-62 time drops by just 0.1 second. So you don’t really gain much from this whole costly experience.

On track, the yellow peril is undoubtedly louder, far more visceral than anything else I steered that day. It’s more tail-happy than the full-fat FK8, but it’s not a ditch finder. Whenever a slide is induced you can feel what the Civic is doing beneath you, it’s never out of control or lost, a few tactile inputs and you have it back on the straight and narrow. 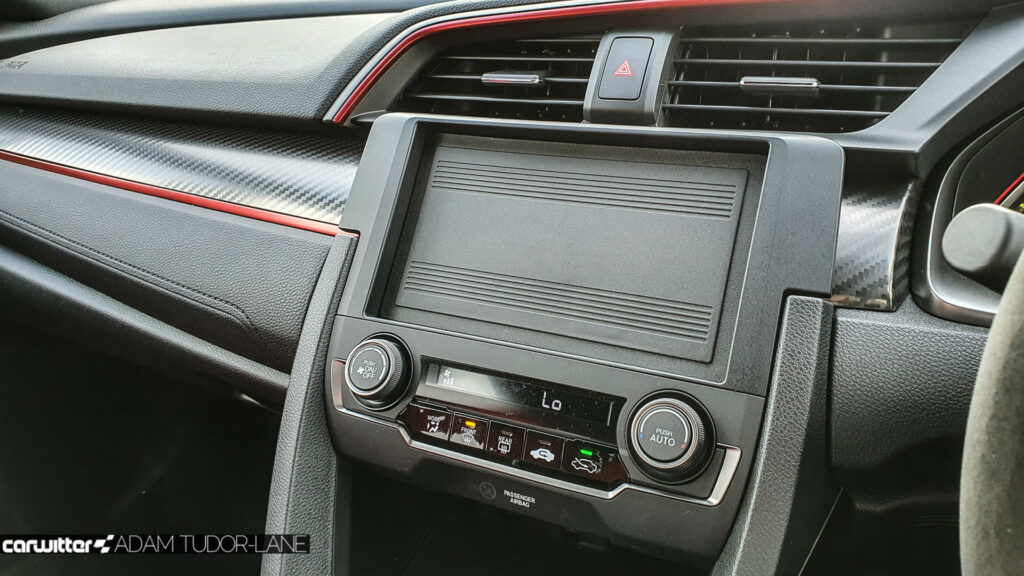 Sure, it would be a hoon on track days, but in reality, there’s no real performance benefit to be had during everyday driving. You also have to remember the super sticky Cup 2 tyres, a lot of the extra driving prowess can likely be gleaned from those bad boys. 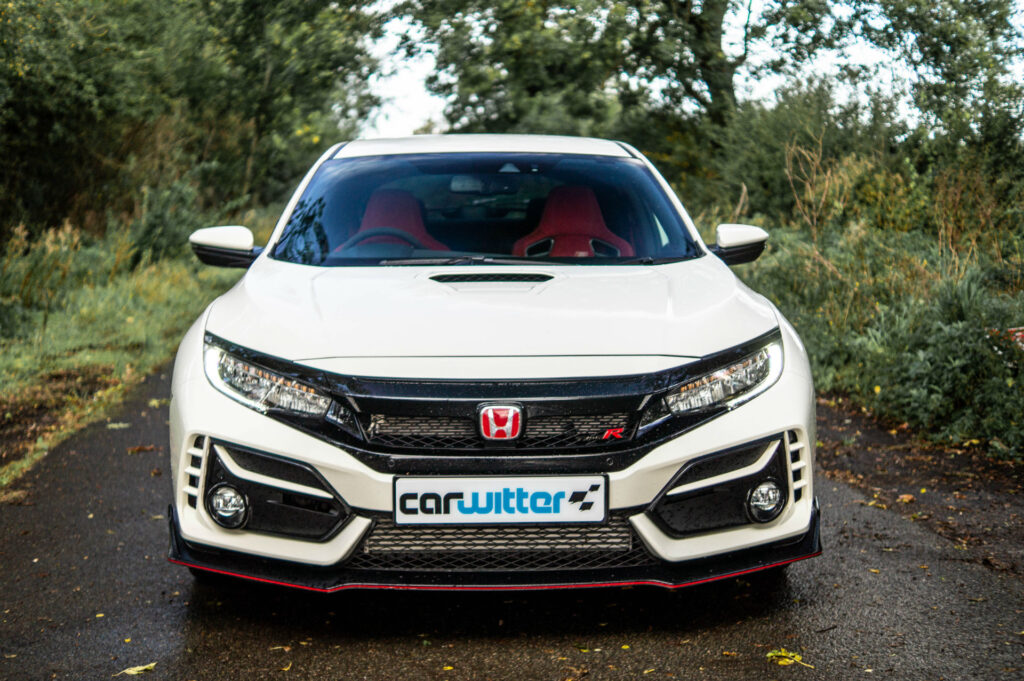 Tweaking perfection is always welcome, and it’s a testament to the engineers at Honda to want to improve on an already tried and tested model. It’s what Nissan have been doing with the GT-R for years, and it makes perfect sense for a low production, sporty model in a range.

It will also generate fresh sales, as this model is better than the last, but that’s still in a minuscule way, average Joe wouldn’t notice the difference if they were driven back to back. 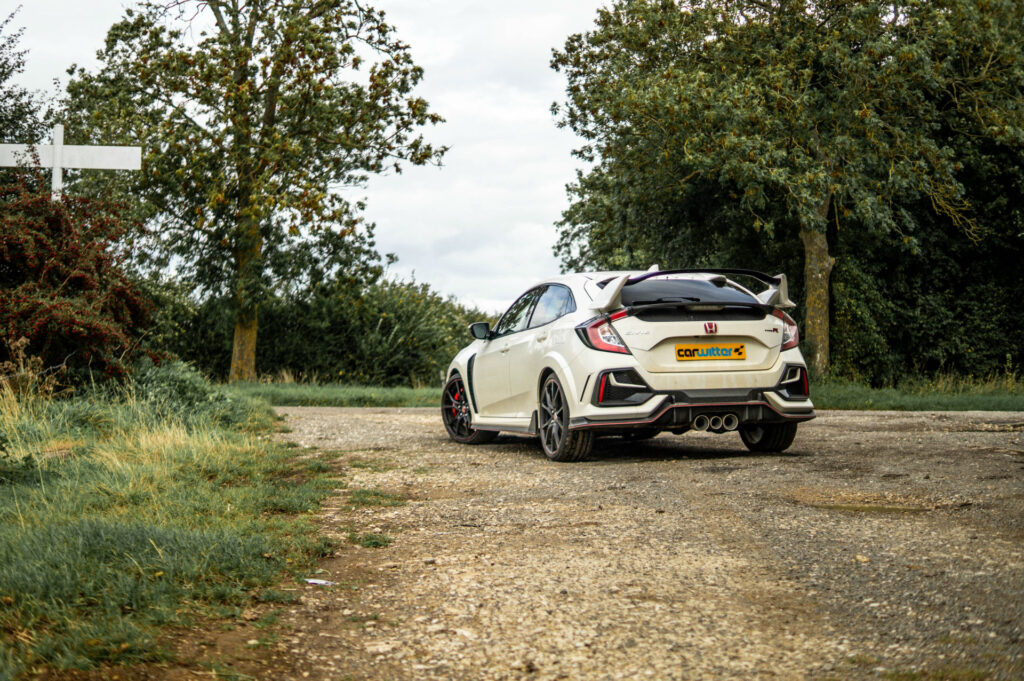 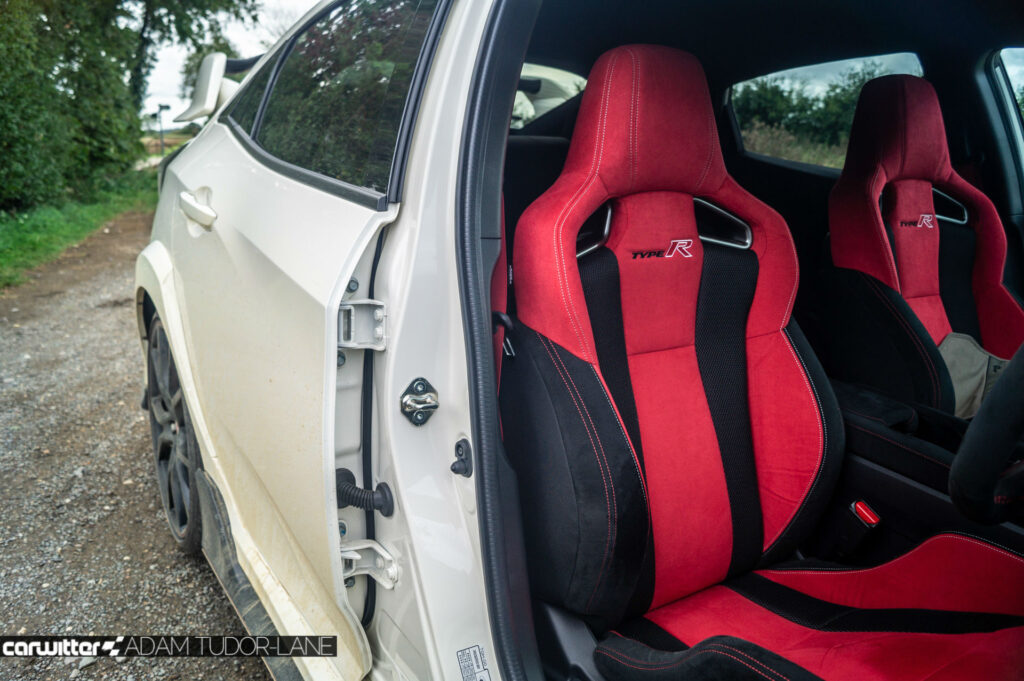 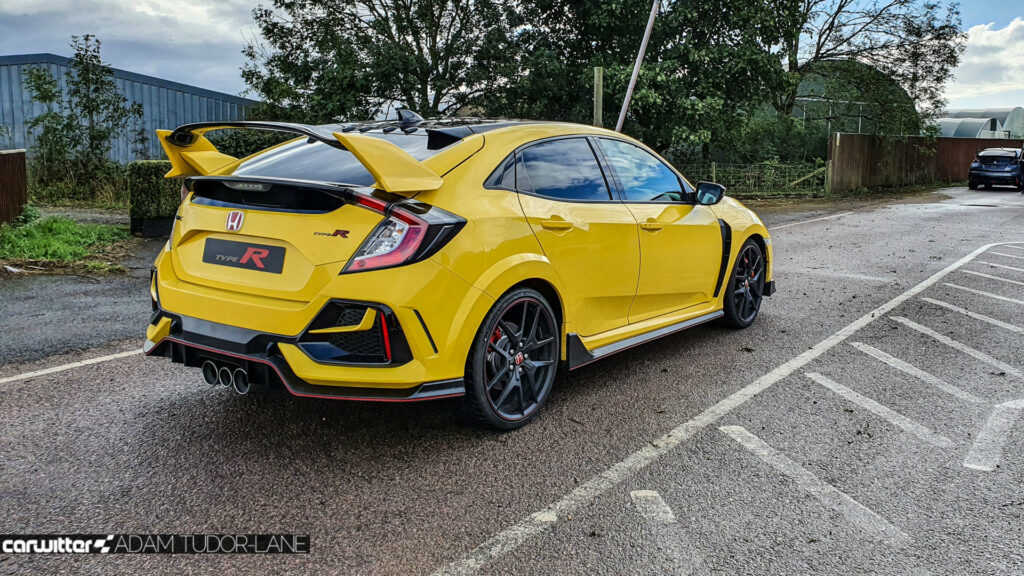 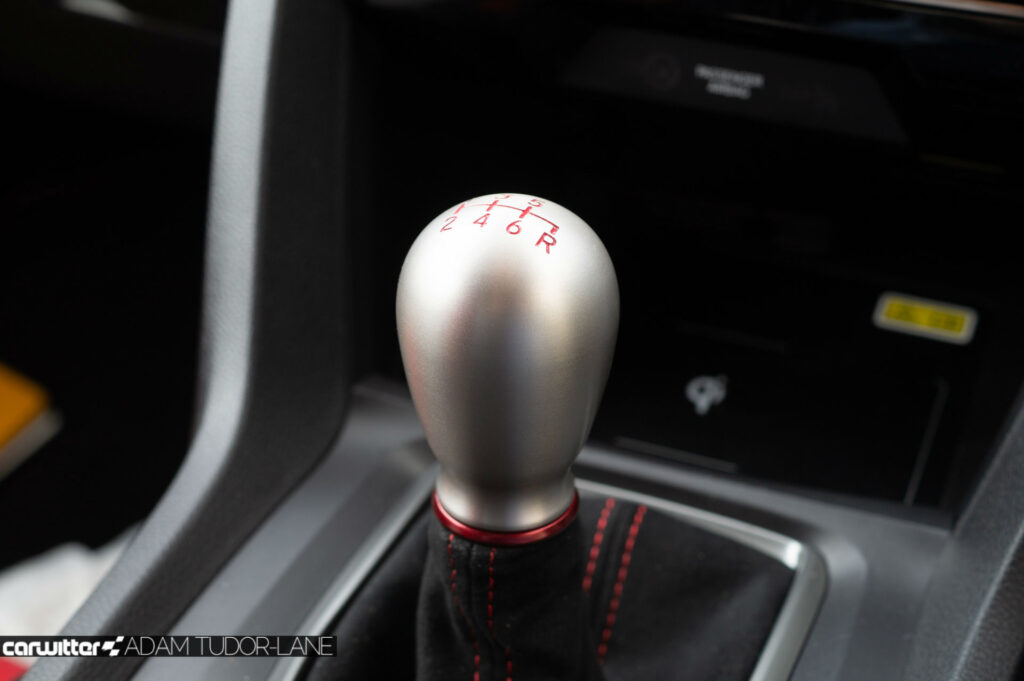 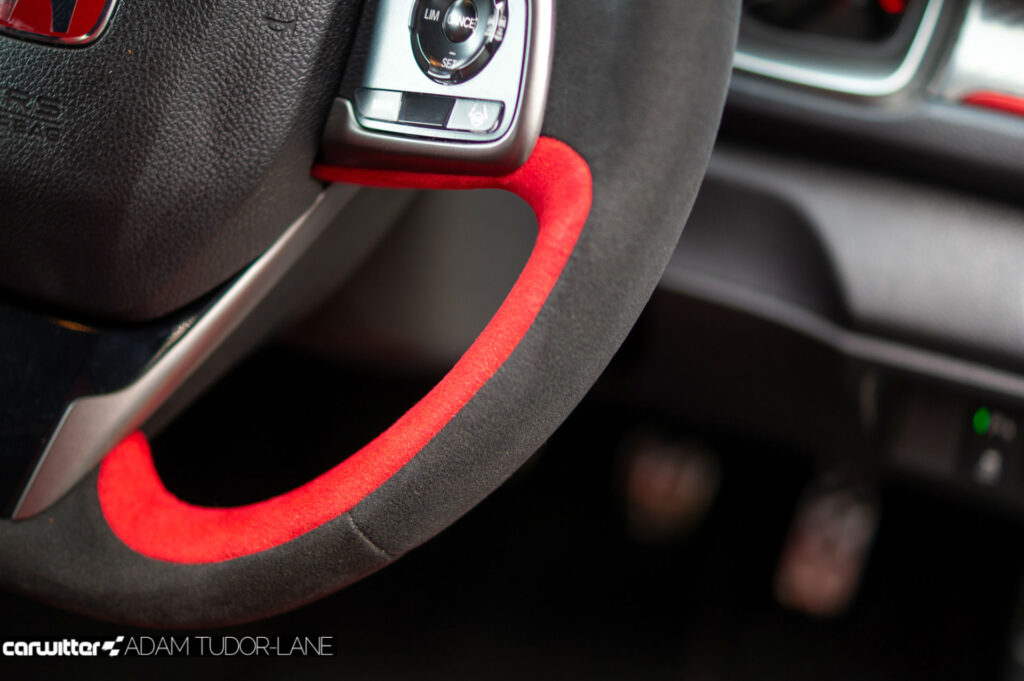 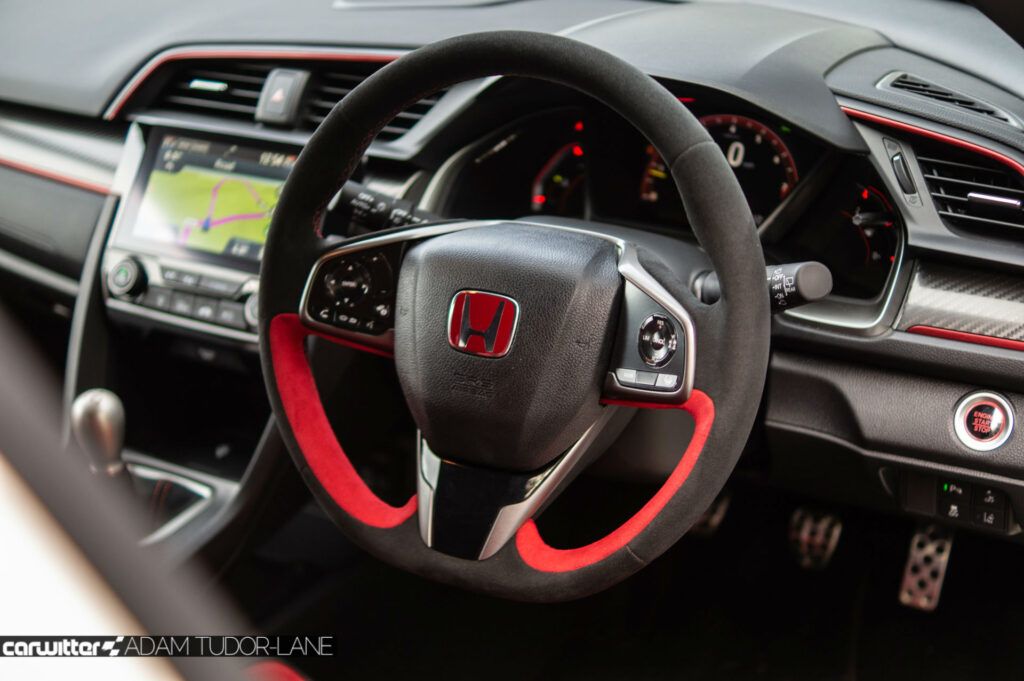 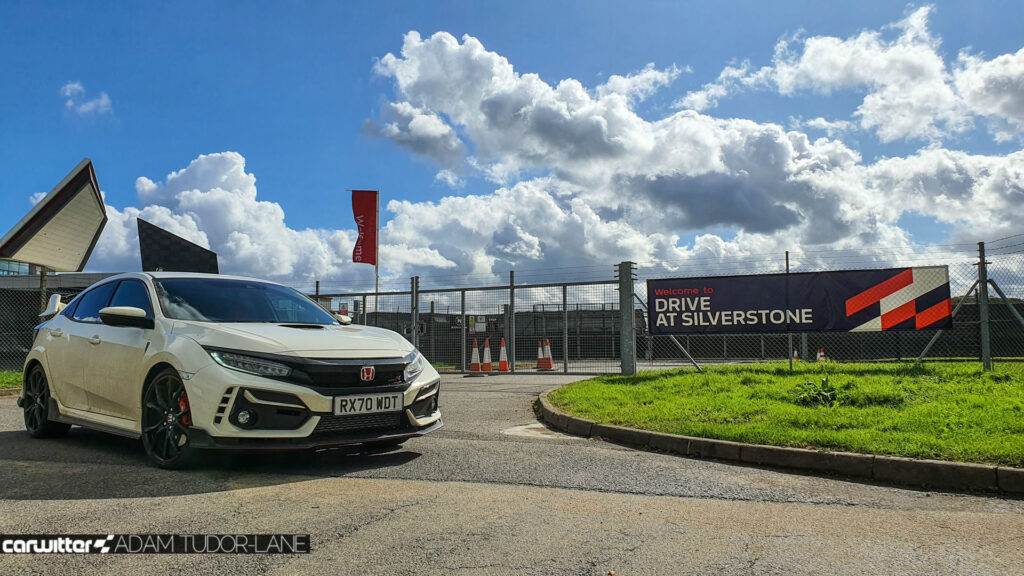 Under the skin: How HD radar may advance self-driving vehicles