When this ‘all-new’ 2019 Range Rover Evoque was first revealed, many, especially in auto-journo circles scoffed and laughed. Gerry must have been having an off day, the new baby Rangie is so similar to the old one most streetwalkers could pass it by and not even realise. But there’s more below that familiar skin which sets it apart from the first gen. 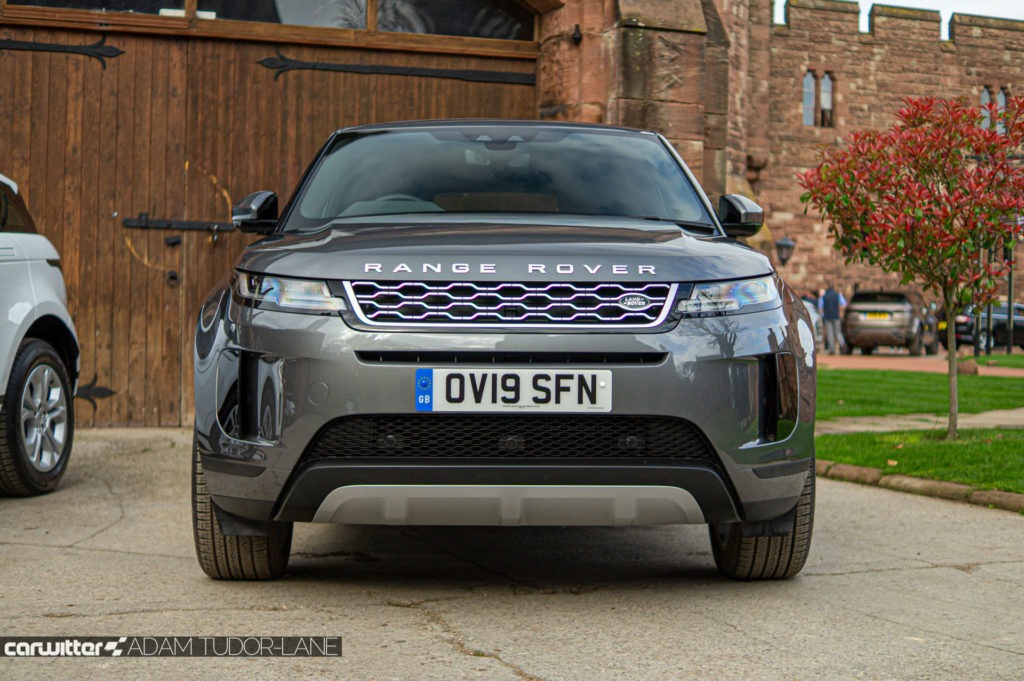 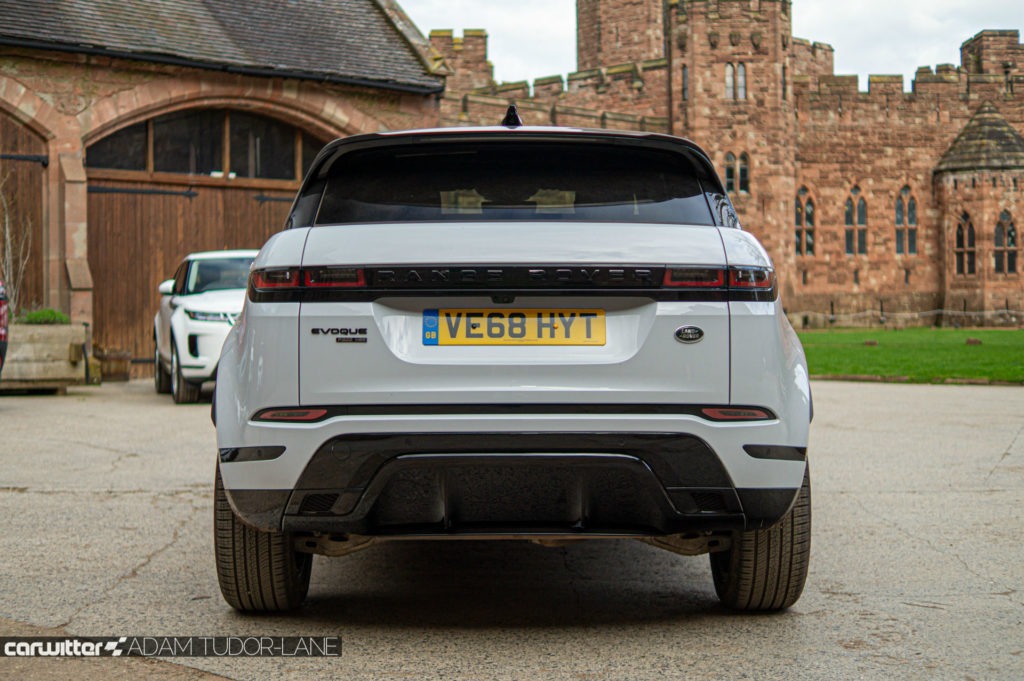 They’re gonna be divisive. Yes, it seems as though the nose and arse from a Velar have been ham-fistedly shoved on the front and back of a regular Evoque. To all intents and purposes, this thing looks like a facelift.

Actually, 90.1% of its parts are new, it also comes in a five-door only form…sadly. But that trend can be seen throughout the carscape, all the way from small and medium-sized hatchbacks. Three doors simply don’t sell in the volume needed to make them worthwhile. Which is kinda sad as the Evoque coupe was practically the embodiment of the concept.

Either way, the exterior does actually look sleeker, as the Velar is a rather lovely looking vehicle from any angle. 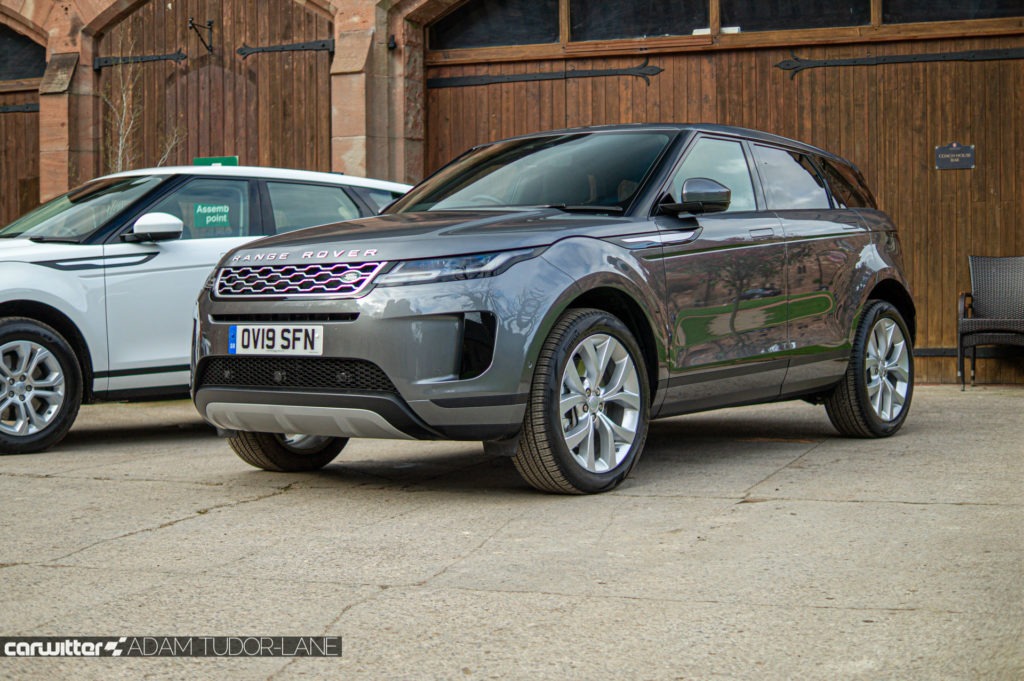 One thing you notice straight away is just how refined this new Evoque is, you’re so well isolated from both the engine and outside world it adds ‘premium feel’ by the bucketload. That serene nature continues to the ride, the standard suspension doing a superb job of refining broken sections of tarmac, dissolving lumps and bumps with ease – and this is just on the standard suspension, sans any active trickery.

Cornering hard creates just a smidge of body roll, there’s a superb mastery of weight control and comfort at work beneath, something Land Rover should be highly praised for. 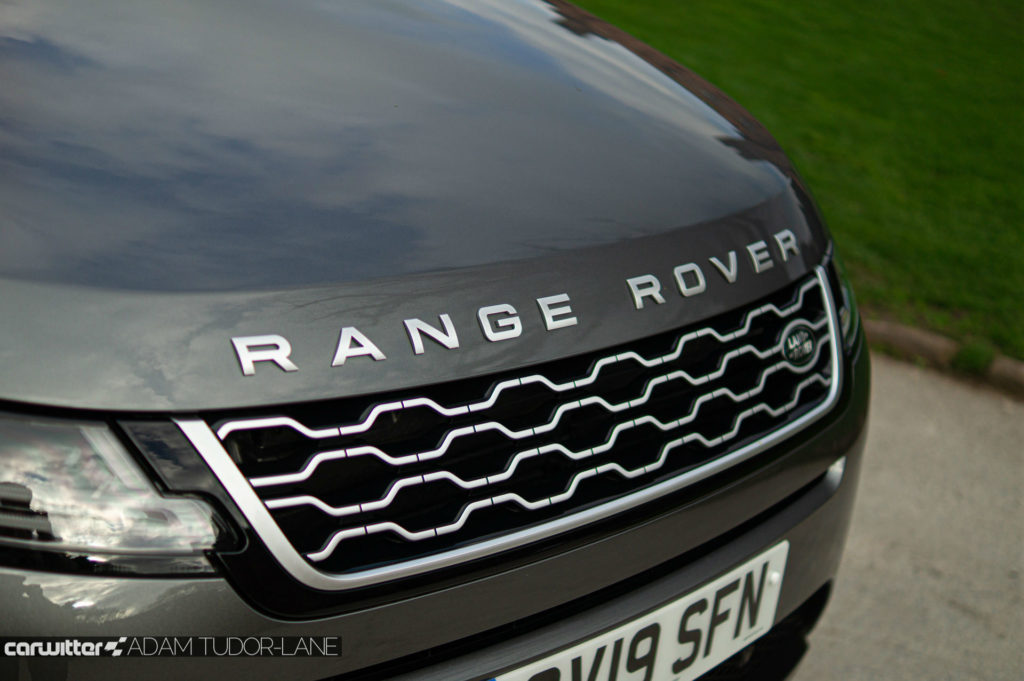 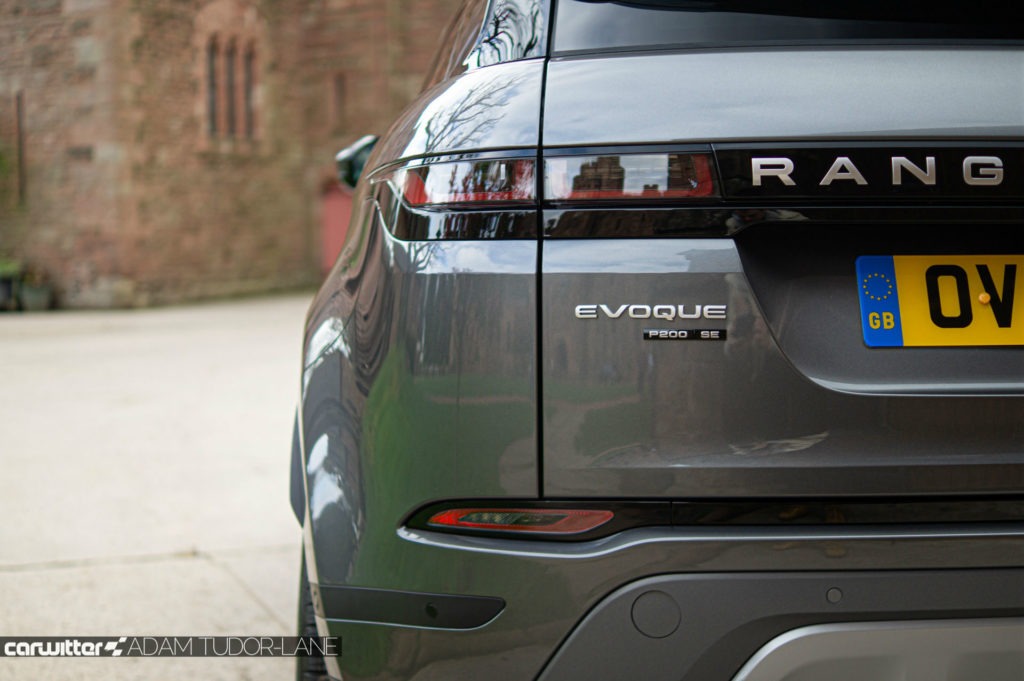 Entry level models with the D150 engine make do with front wheel drive only, the rest are all-wheel drive.

On the launch event we drove both the P300 petrol and D240 diesel, these are higher powered offerings and ultimately match a decent pace with fairly adequate MPG. The P300 packs 300 HP as the name suggests, from a 2.0-litre petrol engine and all-wheel drive setup, 0-60 comes in at 6.3 seconds. 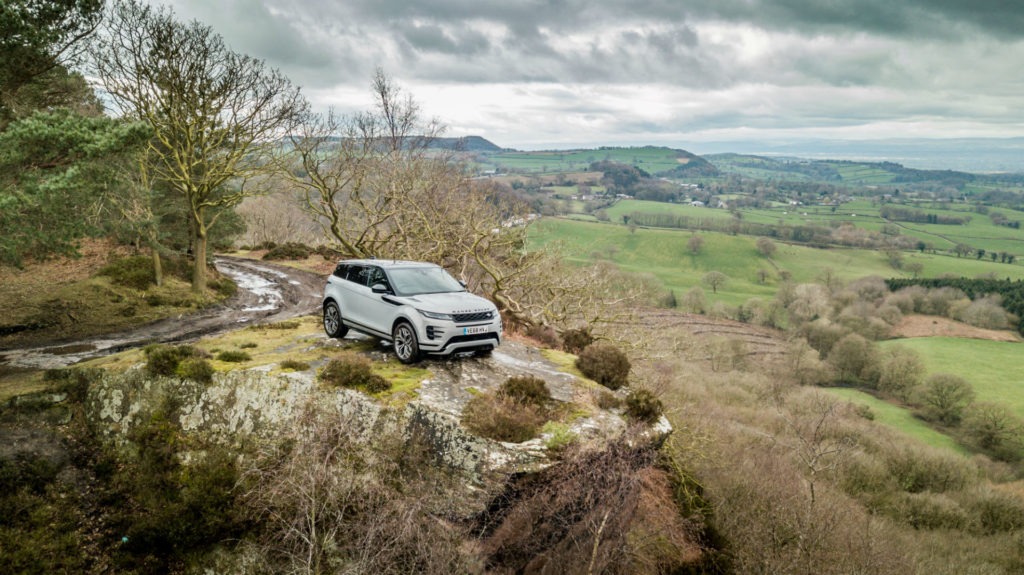 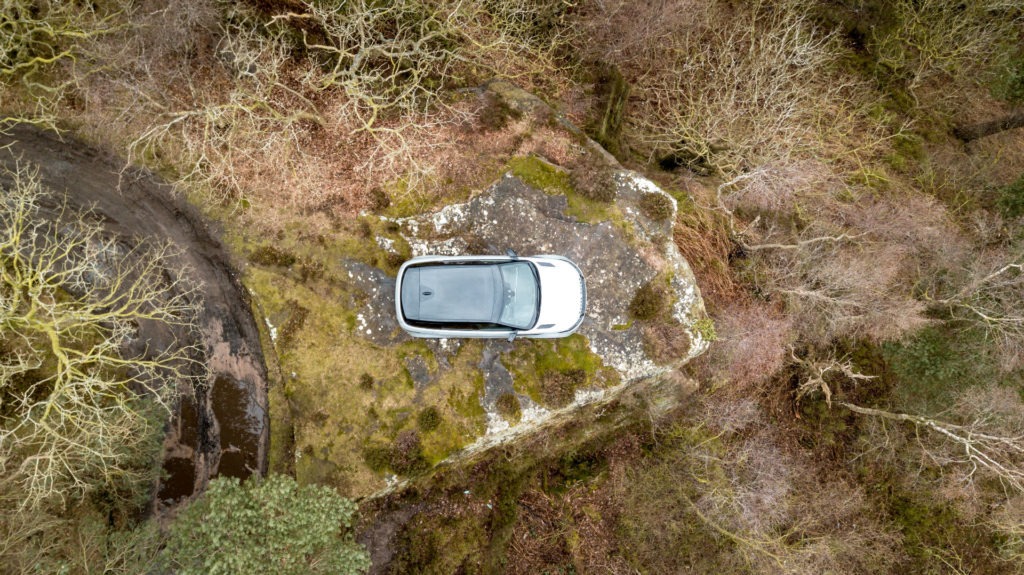 Anything less than 200 bhp feels sluggish in the Evoque, so it’s worth ponying up for the extra horses when speccing one.

There’s an upcoming plug-in hybrid model just around the corner, it’s thought that one in two Evoques inside the M25 ring will be of this flavour. Oddly enough a fully electric model won’t make an appearance in this lifecycle, the platform just can’t accept the number of batteries it would need to make it work. So expect to see one around 2025 at the very earliest. 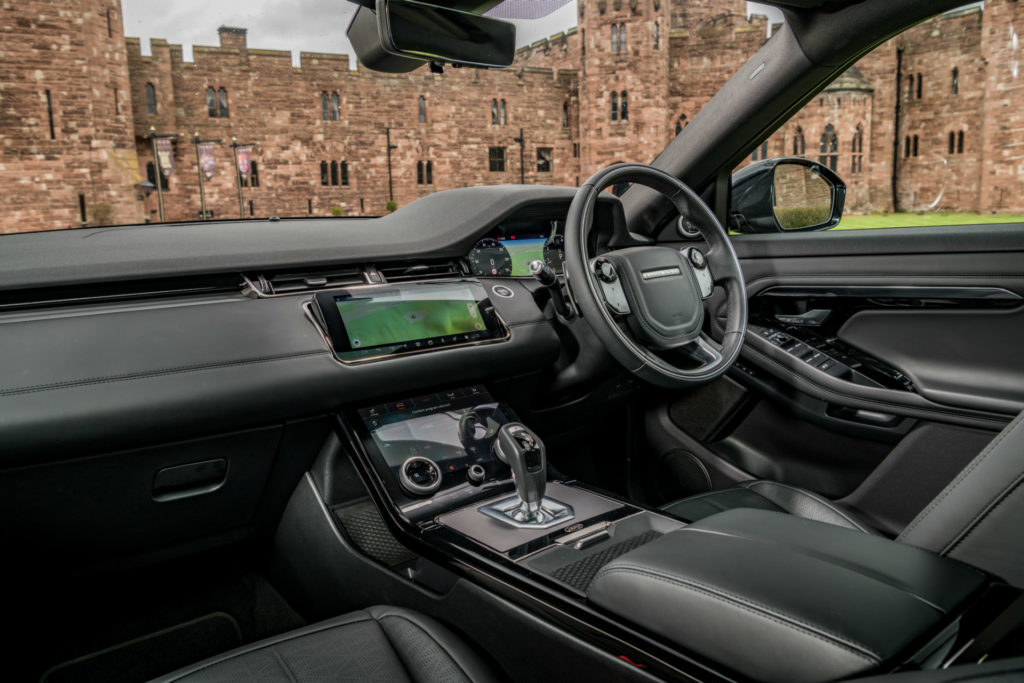 Jumping inside the Evoque and it’s clear to see this is a step up from the first iteration of the baby Rangey, not that the old Evoque was bad inside, but this is next level.

It feels as though you’re in a Vogue or a Sport, the quality hasn’t so much trickled down but cascaded. The part suede part thick grey flecked cloth adds an air of modernity to the interior, matched by the fully suede steering wheel rim and gear shifter, silver satin details shout for your attention as you sit inside.

Be warned though, this Kvadrat premium textile with Dinamica suede costs a cool £2,080 extra. The Evoque is a superbly nice place to be in, and that’s before we look at the infotainment. 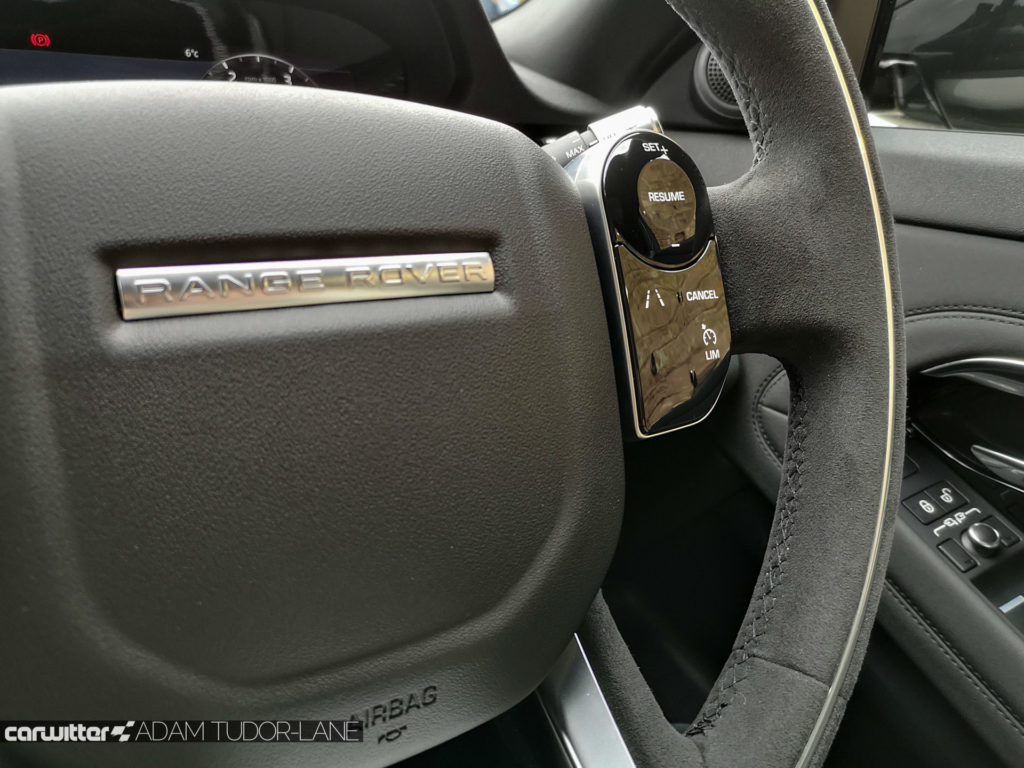 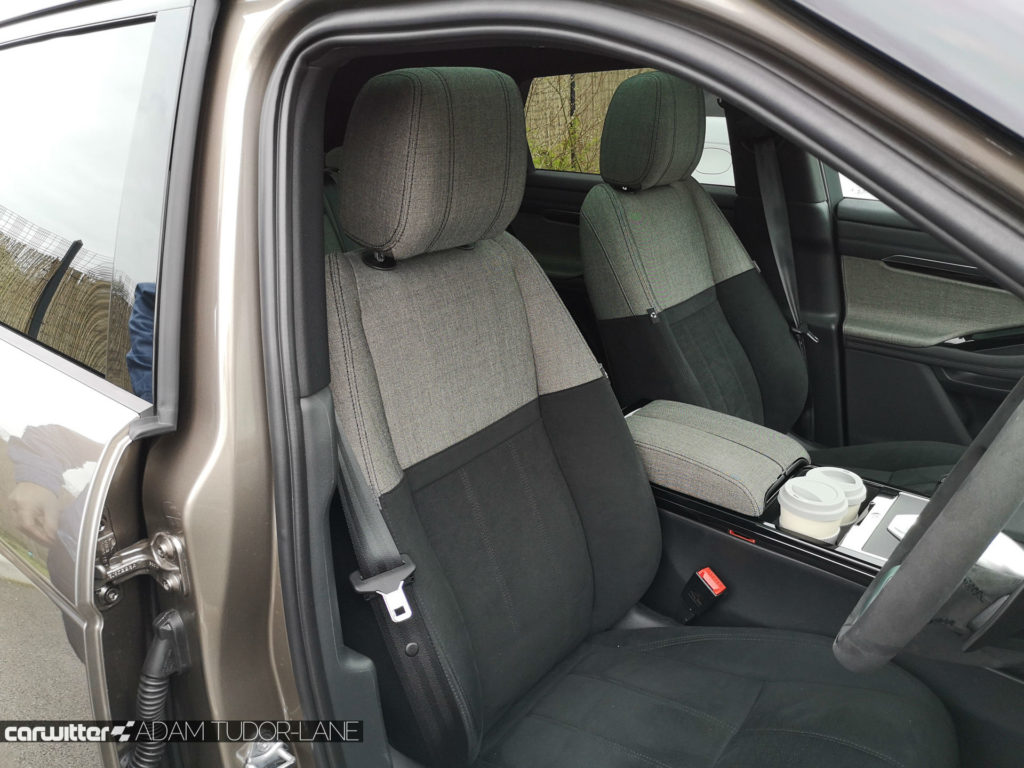 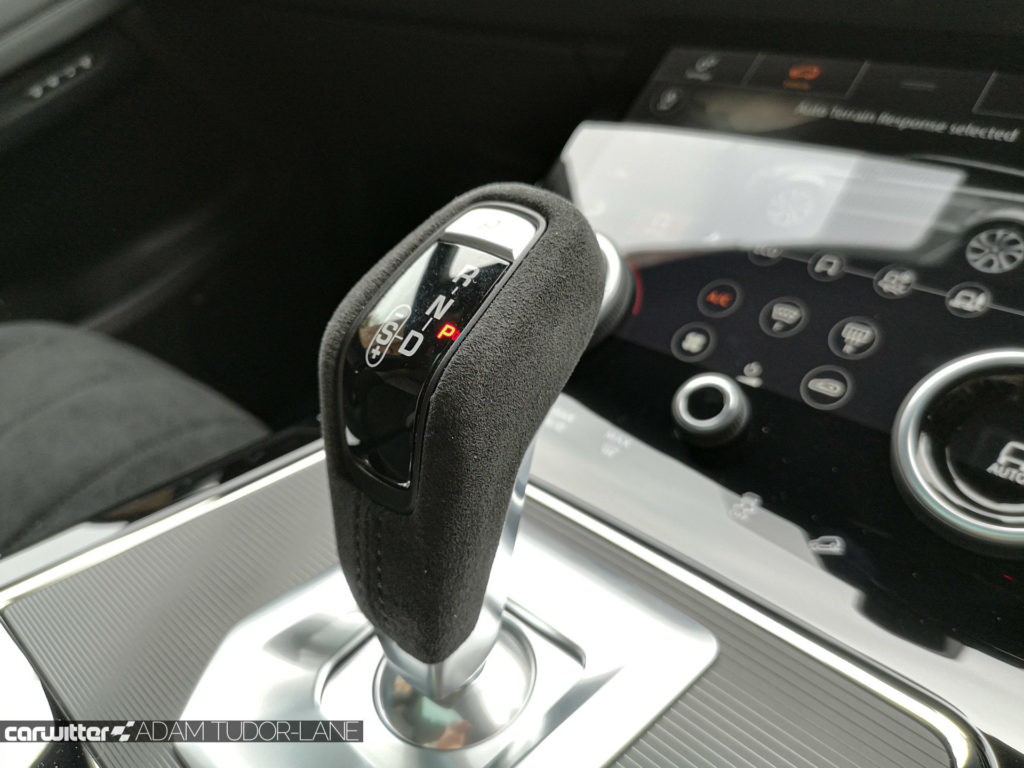 Those glassy screens from the Velar have made it into the Evoque, here you control anything and everything, from heating, lighting and even the off-road modes. The menu’s switch around and the dials change function as you go. It clears the dash of any pushy, pokey old fashioned buttons and looks stunning in the process, this comes standard on SE models and up.

Naturally, you can go super detailed on the configurator, making sure your Range Rover Evoque is going to be unique among the throngs that will be sold. Suede headlining, dark aluminium finishers throughout, head-up display or even the super cool ClearSight rearview mirror. 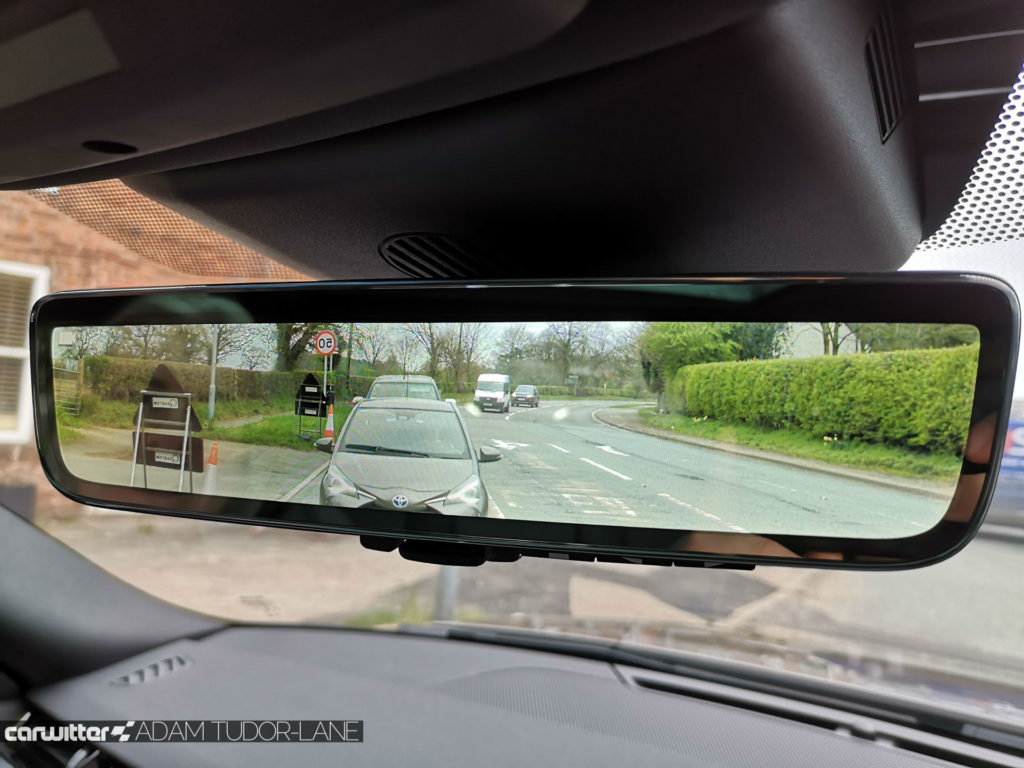 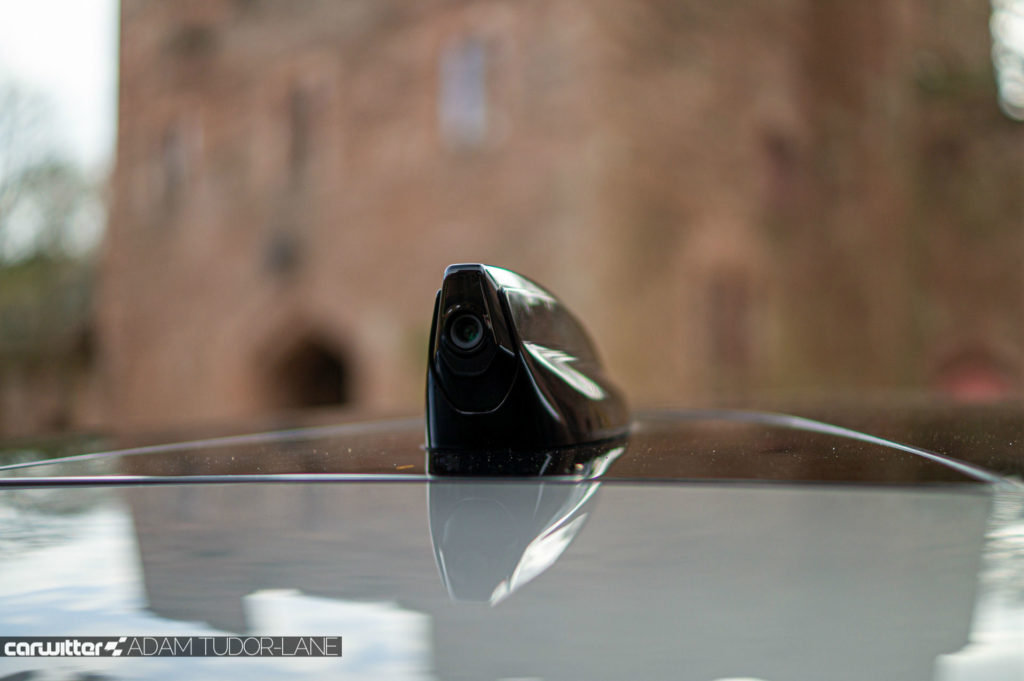 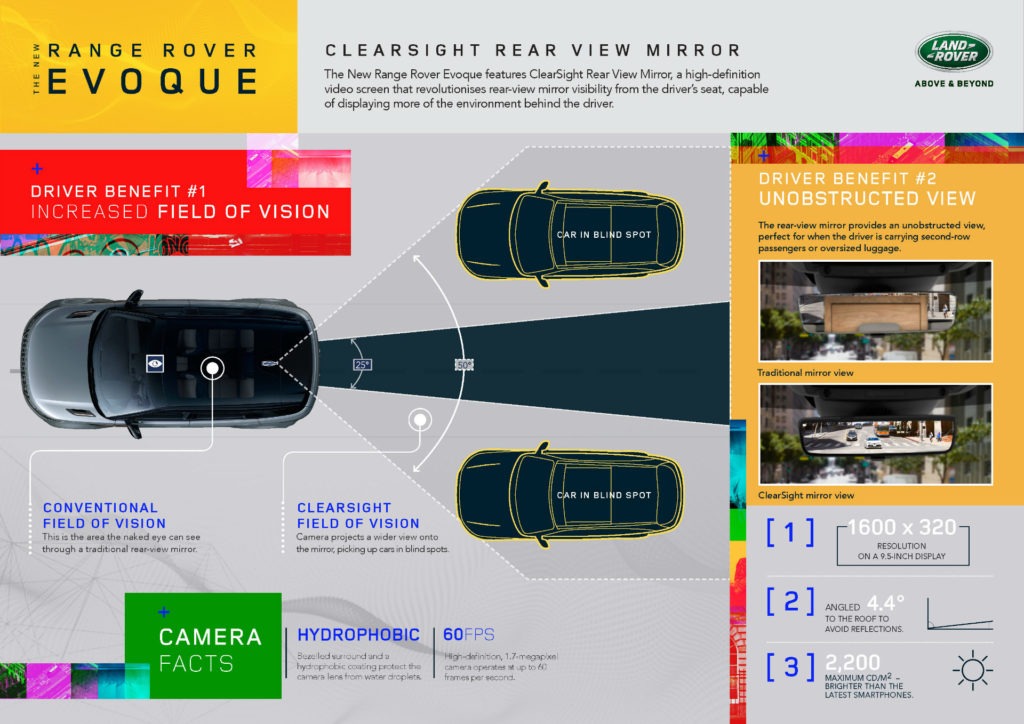 This clever bit of kit turns your rearview mirror into an LCD display, this is linked to a camera in the top spoiler. So no matter what you have in the back seats, stuff for the tip, children, maybe both, you can always clearly see behind you. The camera has been placed in the airflow, so it’s self-cleaning and has an oleophobic coating allowing water to bead off, thus should never need cleaning. 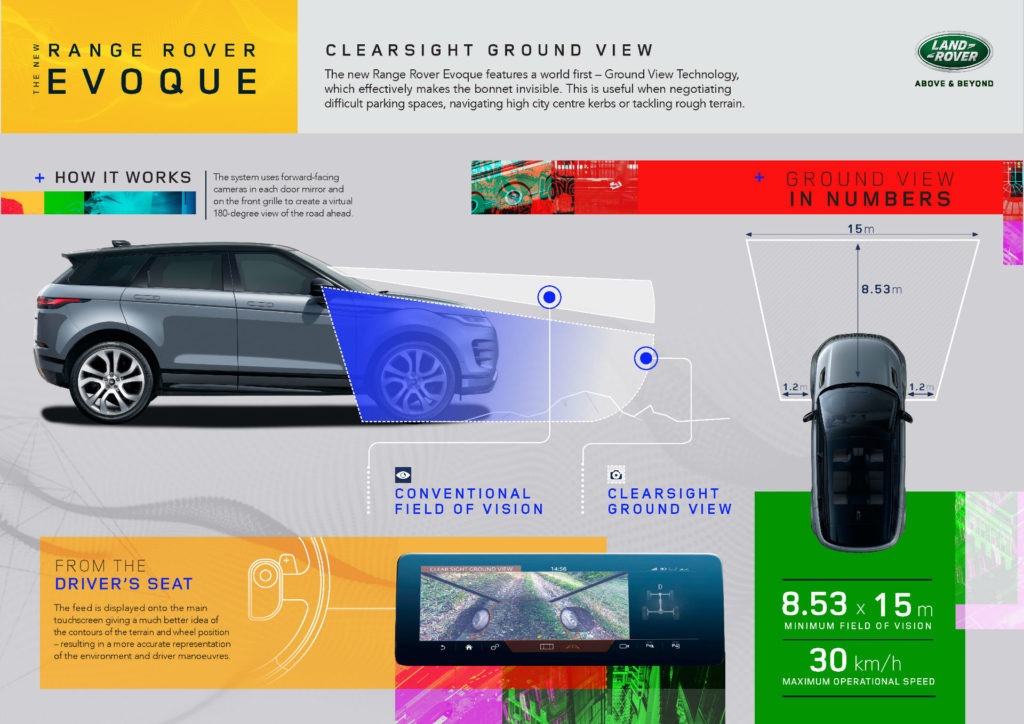 Another option is the ClearSight groundview system, this projects where your wheels and tyres are in relation to the world around you…hopefully making kerbed alloys a thing of the past.

Ditching the three-door model means there’s a decent amount of space for rear-seat passengers in both the leg and head department. Boot capacity measures 10% larger than the old model at 591 litres, this is measured up to the ceiling though, not the parcel shelf so beware that large figure. 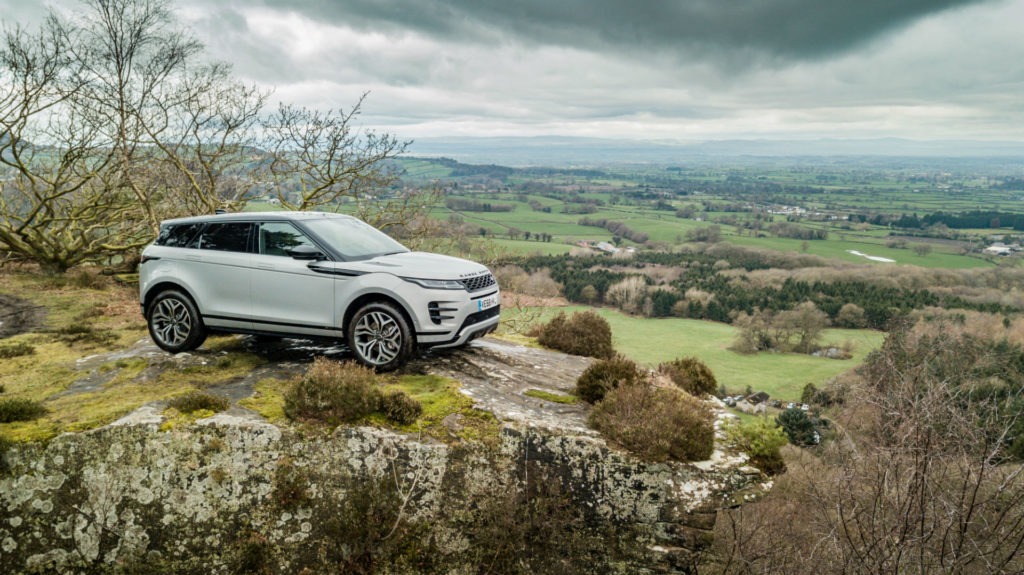 If you’re after a premium baby SUV for your around-town travels, the Evoque is a strong contender. Its looks are somewhat staid, this is total evolution over revolution, and there are much smarter offerings in the form of the Volvo XC40 or XC60, although you will compromise a little on the luxury by going Swedish. 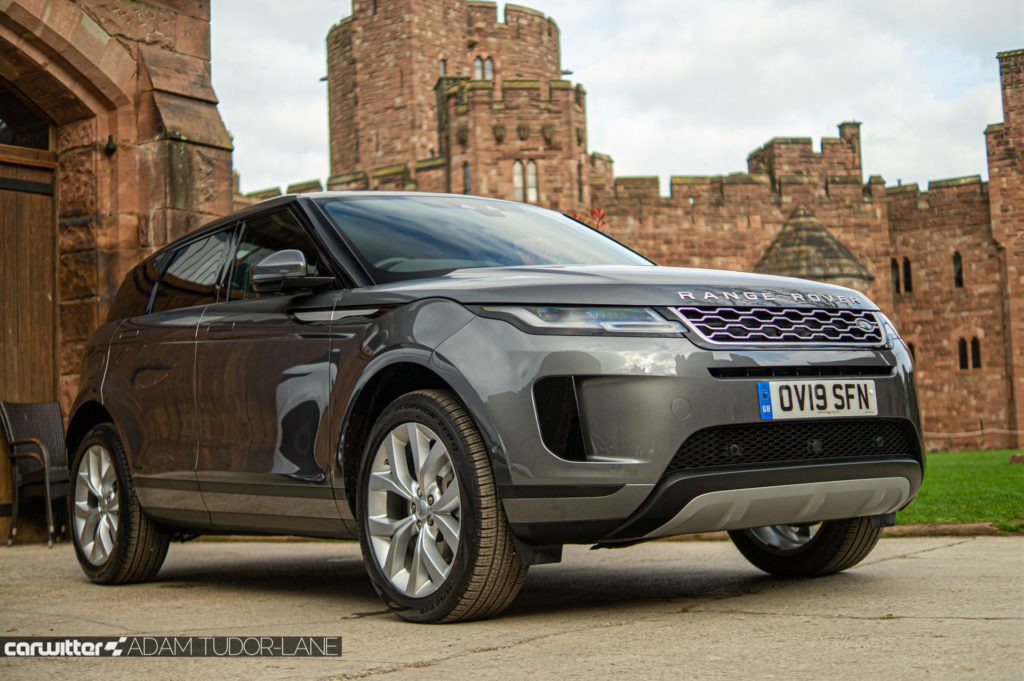 New Welsh Motoring At The Manor event set for June