Did you know that CR-V stands for ‘Comfortable Runabout Vehicle’? Now you do.
Believe it or not, the Honda CR-V is now in its fifth generation, and the U.S have had it since 2017, but better late than never it’s finally hitting UK roads.

Drive wise. we’ll cover both the hybrid and non-hybrid model. 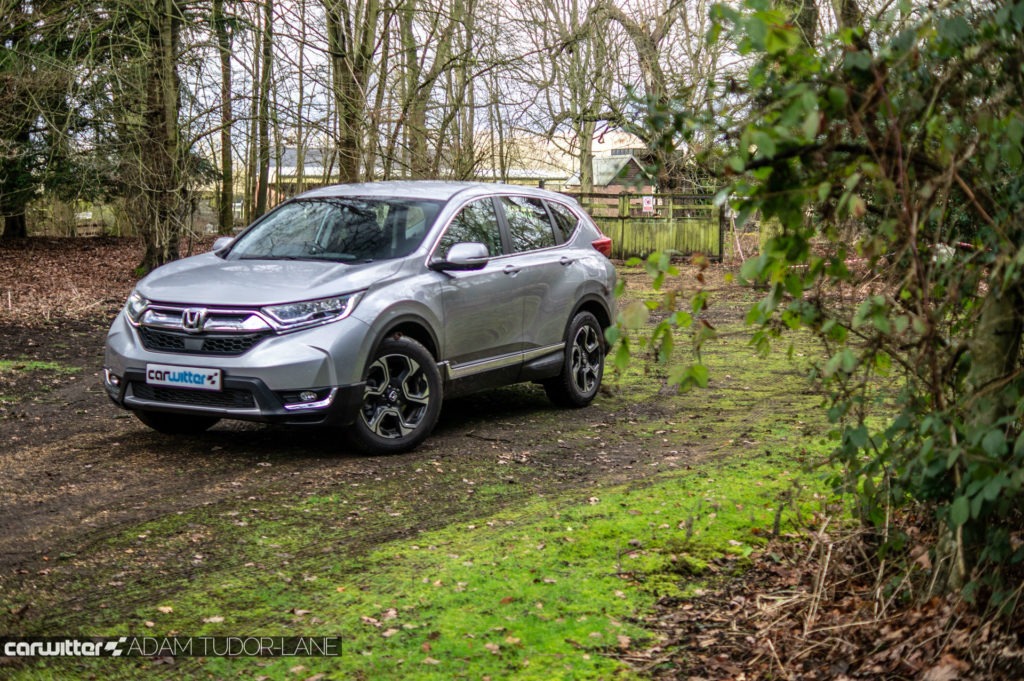 It’s as though Honda has taken some styling cues from Toyota with the front of the new CR-V, it seems very C-HR in appearance with its bulbous angularity, especially lower down. It gives the new CR-V far more road presence making it seem lower and squatter than before.

Side on and the Honda takes a far more standard SUV stance compared to the sloping rear of the fourth-gen model, while at the very back large lights make the rear end look smaller than it is.

The only noticeable changes between the specs are the addition of fog lights on SE, these change to LED on SR and EX. You’ll find roof bars on the SR and EX as well as tinted rear glass and the alloys change slightly in size and design as you go up the trim levels. 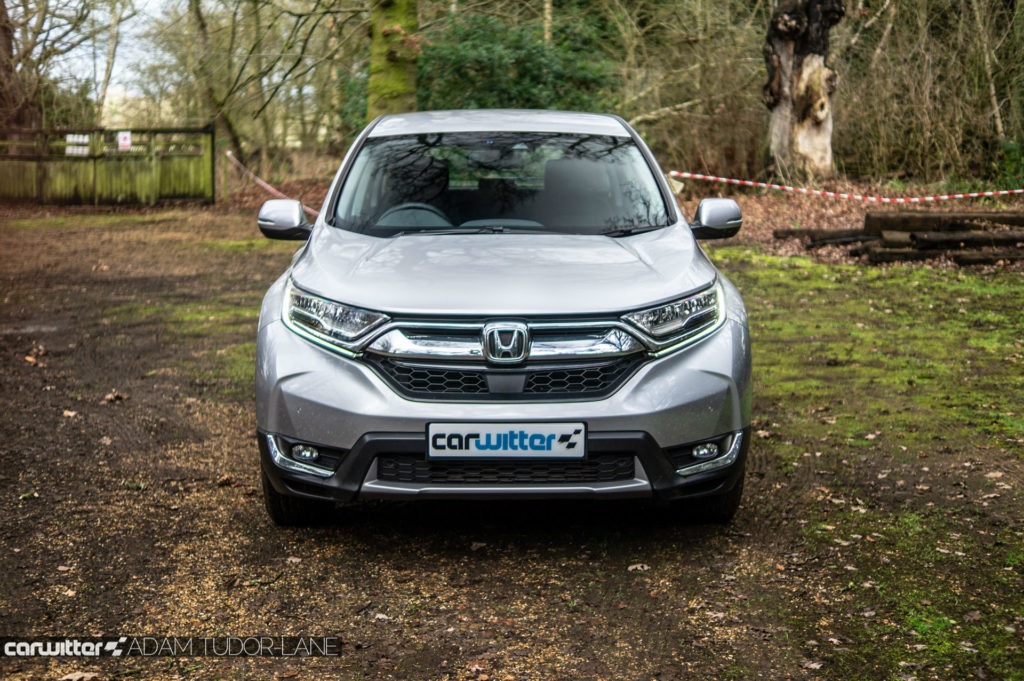 All CR-V’s are powered by the 1.5 litre VTEC Turbo engine making 173 BHP and 220 Nm of torque; you can opt for either 2WD manual, all-wheel drive manual or an all-wheel-drive automatic fitted with a CVT gearbox.

The CR-V hybrid, on the other hand, is powered by a 2.0-litre petrol engine fitted with two electric motors, one to power the vehicle and another to generate electricity. You can drive on electric power alone but for only around a mile. However, the combined power output is 181 BHP and 315 Nm of torque which means a 0-62 time of 8.8 seconds. 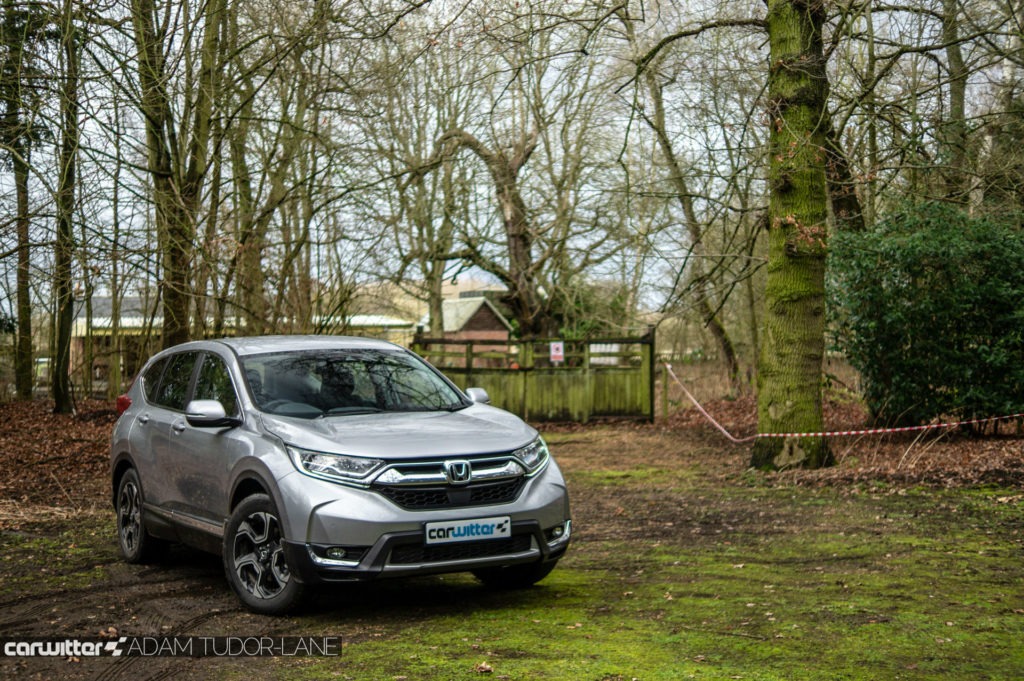 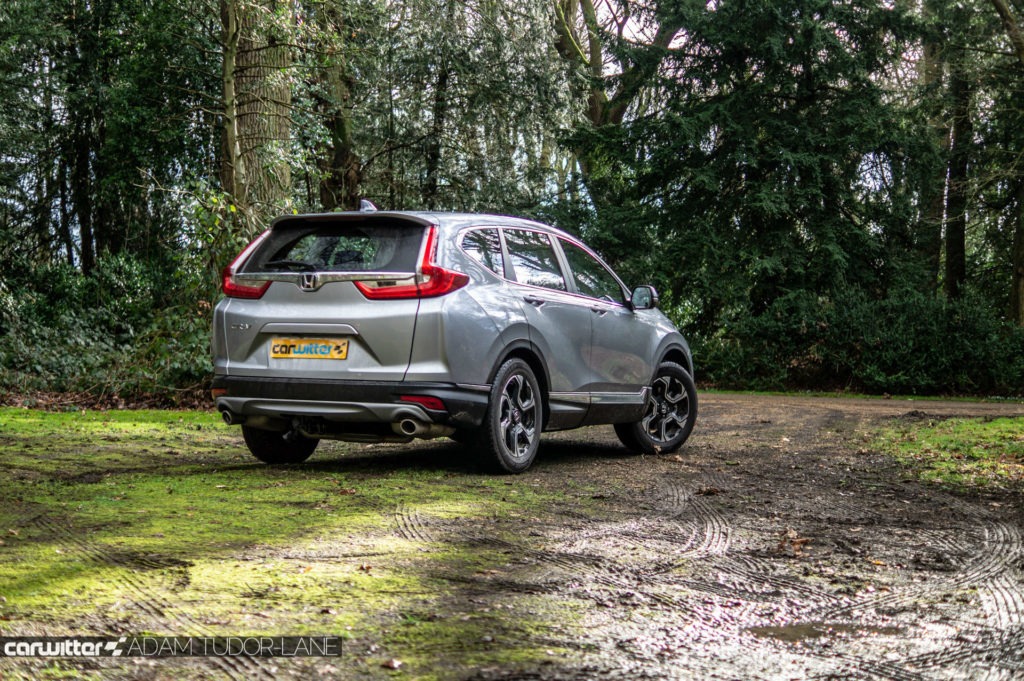 One of the most significant differences in this generation of CR-V is how much sportier it feels, the steering and turn in is now direct and near instantaneous, weighting is equally pleasing. Compared to the old one who felt like a big old bland people carrying bus its like night and day. You can now thread the Honda along a back road at a decent pace with ease; there’s little body roll unless your inputs are jarringly abrupt, while braking and acceleration are met with barely any pitch.

Power delivery in the Hybrid is the most potent of the lineup, that electric motor working with the petrol engine at every opportunity to give peppy acceleration around town and filling in the lack of torque when needed.

Its CVT gearbox is also silky smooth when combined with the electric motors; you simply get linear acceleration as if you were driving an EV. It just works and makes driving blissfully smooth.
If you nail the throttle be prepared to hear the engine up front as a cacophony of revs will slither through into the cabin, that’s forgivable as any engine will do the same CVT or regular auto. 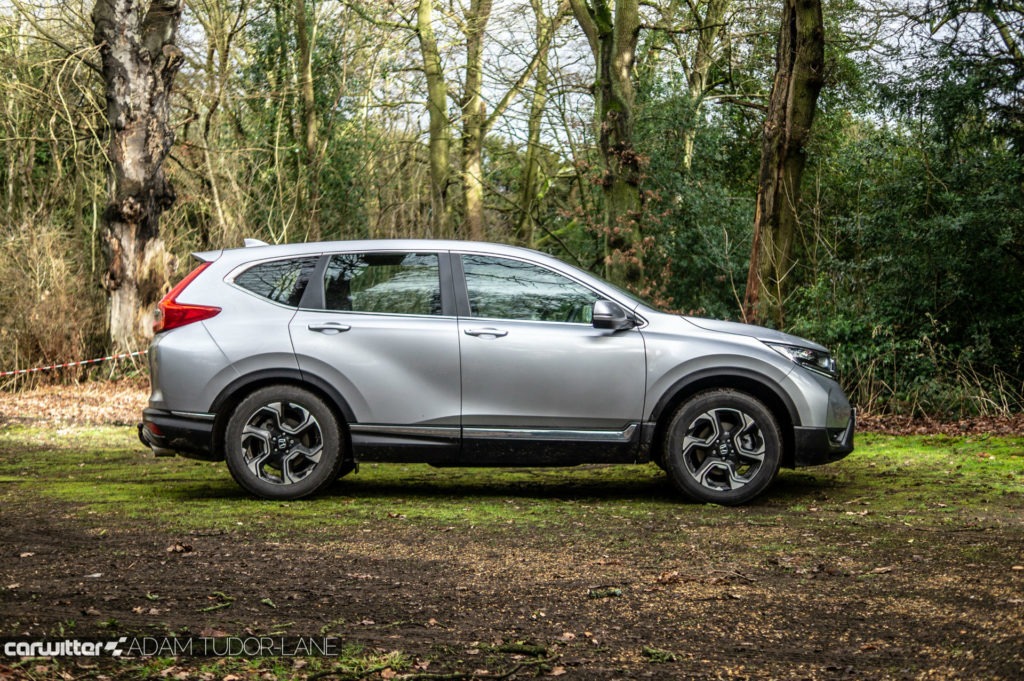 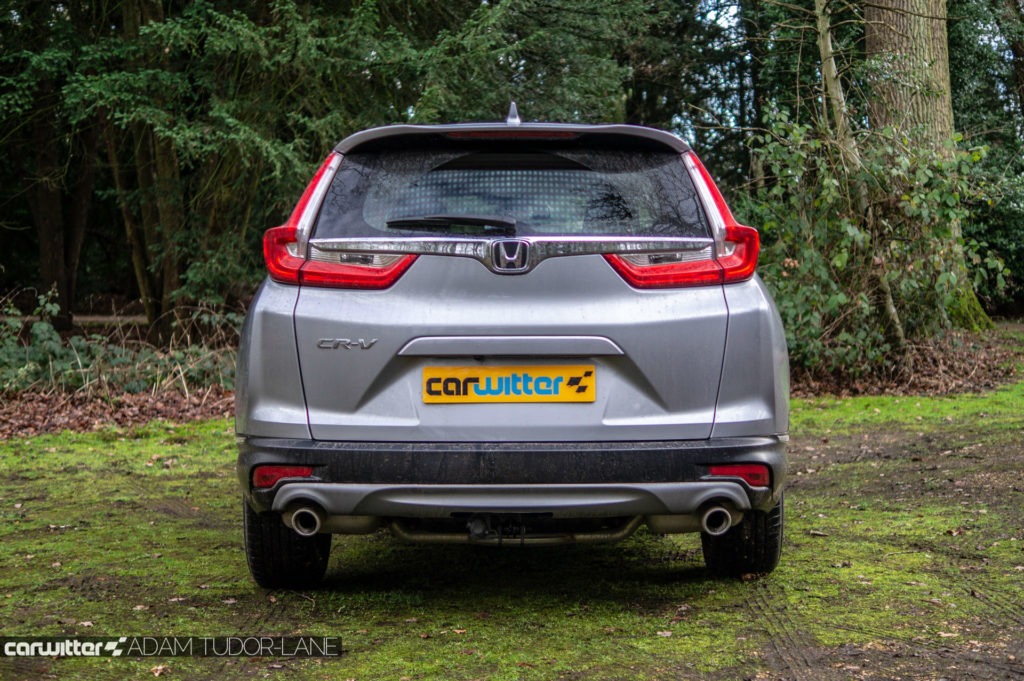 Driving the manual we found a nice short throw on the gear stick adding to the new sporty characteristics, and in two-wheel drive form there was ample power from the 1.5 turbo engine to cope with everyday driving, it never felt as though there was a lack of horses even at motorway speeds or under brisk acceleration.

Once in the driver’s seat, you’ll find things are typically Honda, well laid out but occasionally plasticy. Like the steering wheel buttons that are lifted from the Civic, they feel like they’re off a 90’s games console.

The centre console fares much better though with a matte plastic swathing all the touchy feely bits. A big plus point for the automatic is the lack of a gear stick; there are just four push buttons that control drive, reverse, park and neutral. Why so many autos still go down the archaic stick route, we have no idea. 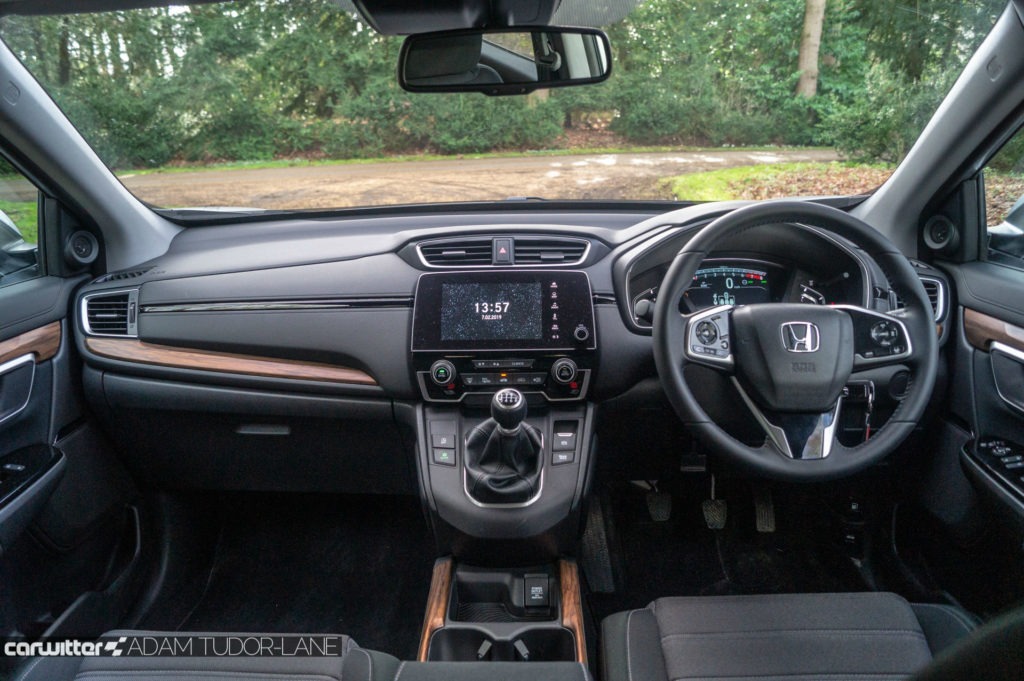 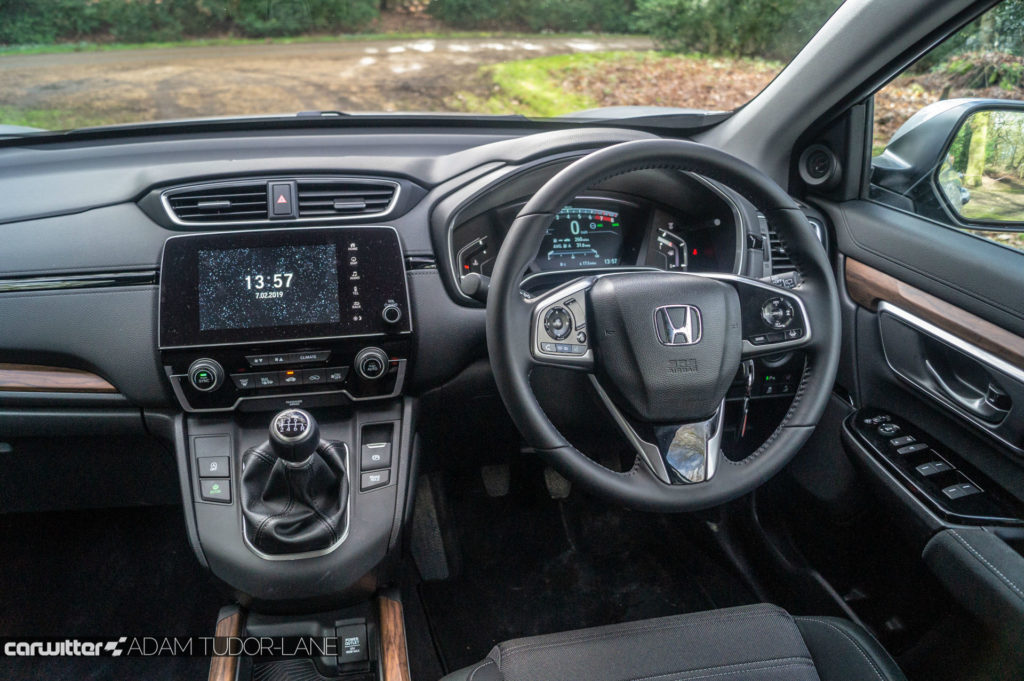 You’ll find soft-touch plastics across the face of the dash and on top which lifts the quality to higher levels throughout. Across the dash and doors you’ll see some printed plastic wood effect veneer, no idea why it’s there and from what we can make out on the Honda CR-V configurator you’re stuck with it as there’s no other option. While it may be OK for the U.S or Japanese market, it doesn’t suit European palates. EDIT – You can opt for a metal effect trim as a no cost option, the UK configurator doesn’t show that at this time.

Another slight annoyance was the position of the knee pad on the centre console; it’s there as something to brace or rest your knee against while driving. In the old model this fell square on with your knee, not so in the latest CR-V it was too far away so left me (of average adult height) with a knee hitting the edge of the padding.

Front or rear you’ll find tons of space in the CR-V, a 30mm increase in wheelbase length and intelligent design has managed to create an extra 50mm of cabin space.

At the back, a low flat boot lip makes loading large bulky items a doddle, but its capacity has slimmed down a little to 561 litres compared to 589 in the old model. Fold the seats, and that increases to a vast 1,756 litres. 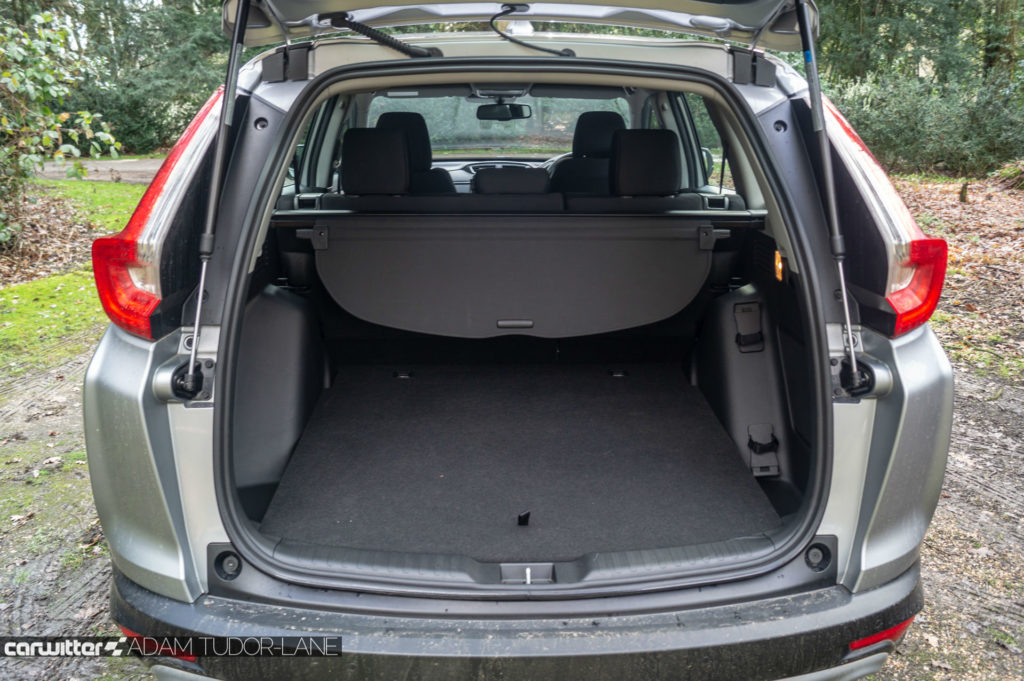 Honda has updated the CR-V to make it one of the best large SUV’s out there at the minute, the driving dynamics have improved no end, yet the Honda is still a comfy family lugger.

If you’re after a diesel then sadly that’s not an option, but the punchy hybrid nearly makes up for the lack of a derv power plant. Prices can be on the high side but stick with a mid-range trim, and you can’t go wrong. 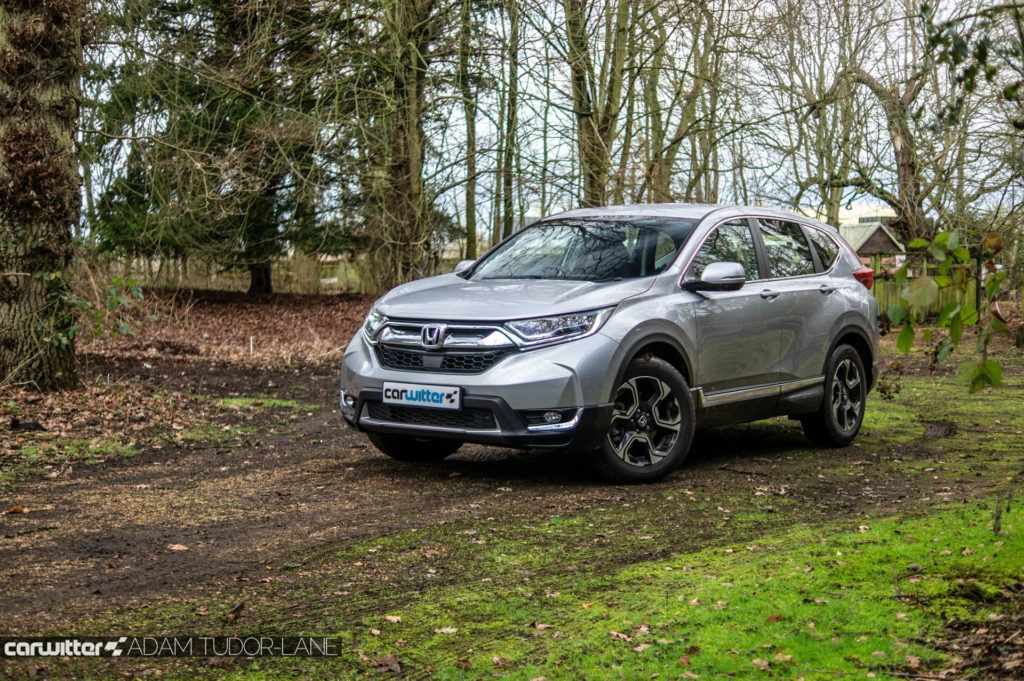 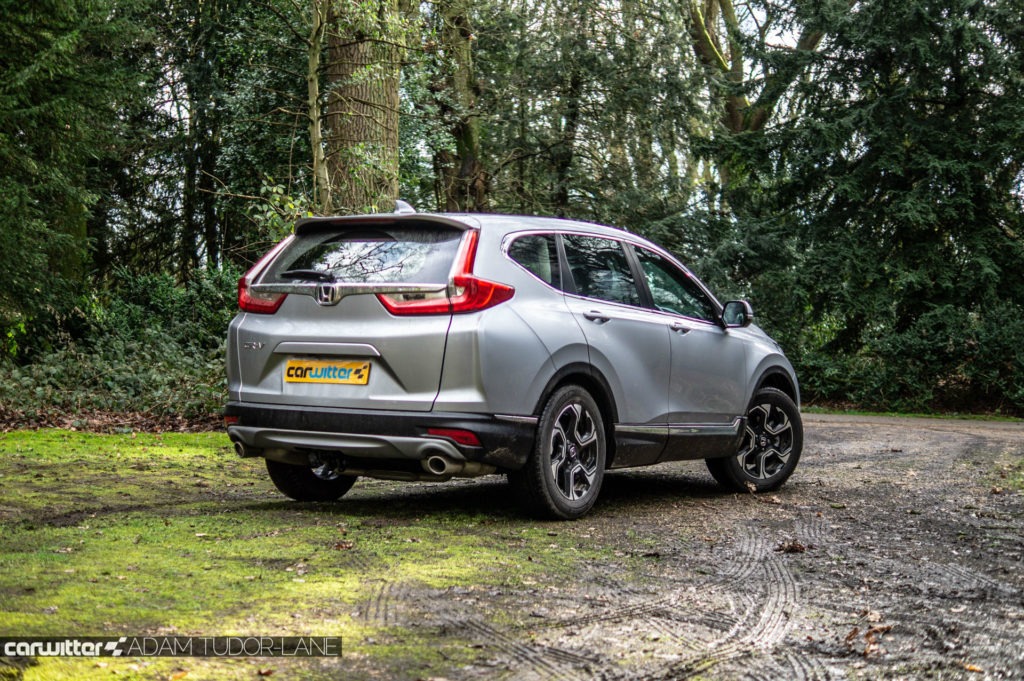