Here on Carwitter, we LOVE the Suzuki Swift Sport. Having had them on loan numerous times over the years, we’ve jumped at the chance to get behind the wheel of this epic warm hatch.

But as with everything these days, the time to turbo has come, gone is the high revving 1.6 VVT we know and love. So has this little bantamweight been ruined? We flew to Ireland to see. 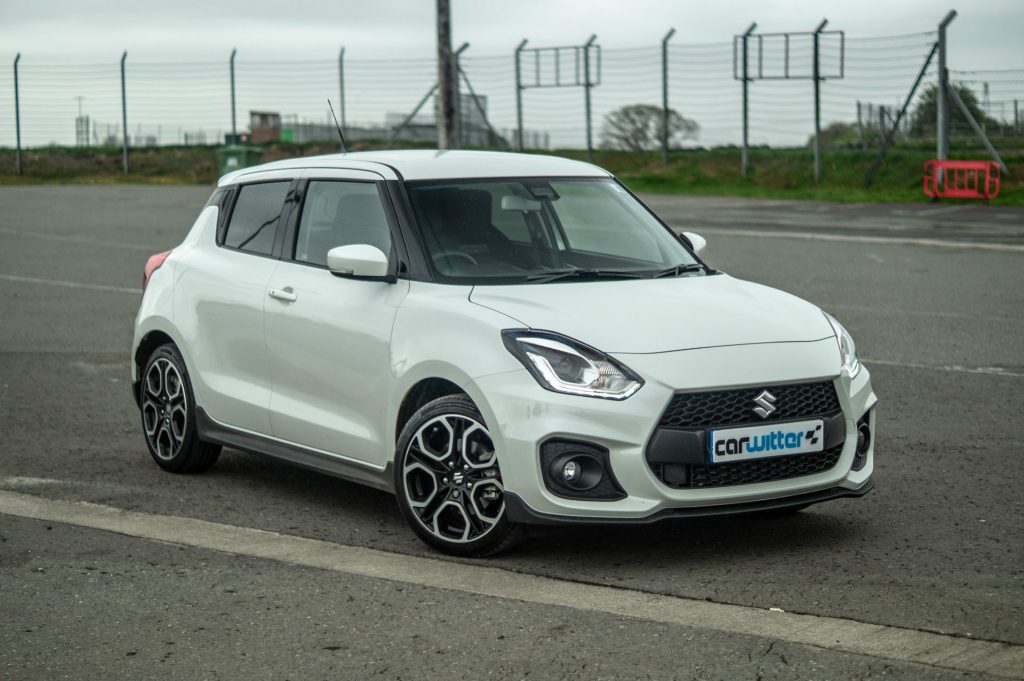 Now when it comes to the looks of the new Swift, personally we think it’s gone back in time. It now blends into the crowd somewhat, rather than being overtly different in a bland seascape of two box hatchbacks.

That being said, the Sport adds a certain level of aggression to the fore. A new extended nose and a different rear bumper add an extra 50mm to the Swifts length. It also sits 15mm lower than the old model. 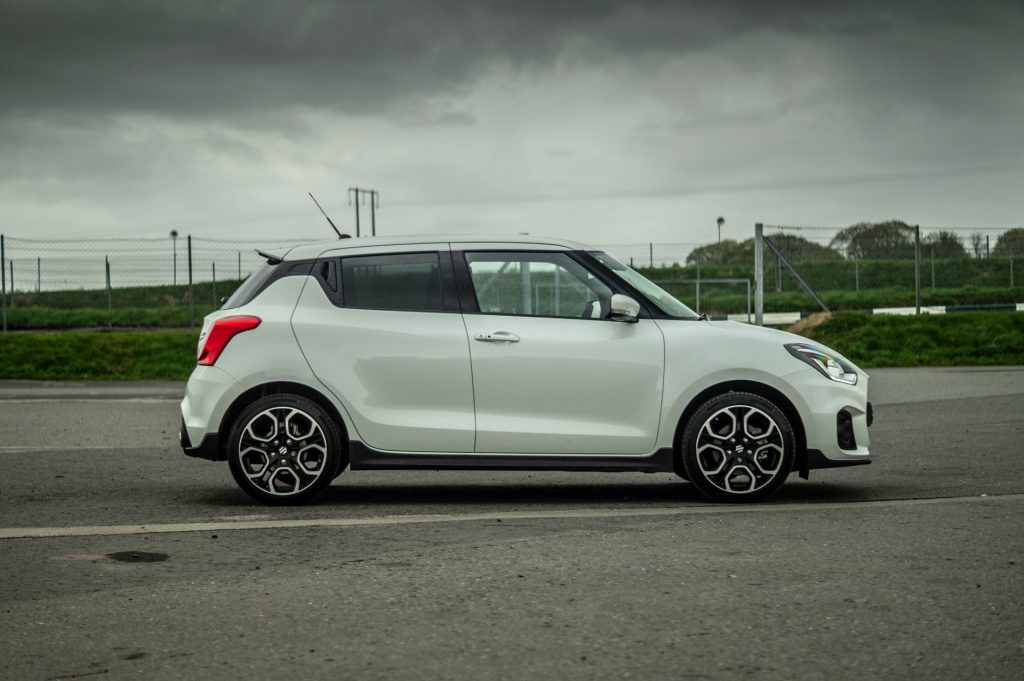 It’s great to see the ‘in body’ exhaust pipes have remained. Suzuki has also moved the radar detection patch to the lower right-hand side of the grille, it stands out rather prominently on the normal Swift, so it’s good to see it being relegated to a less prominent position.

You get matching front and side skirts, but the rear spoiler could’ve been a little more overdone. It’s the same one we’ve already seen on higher trim Swift models, and something a bit more outlandish wouldn’t have gone amiss on the Sport. 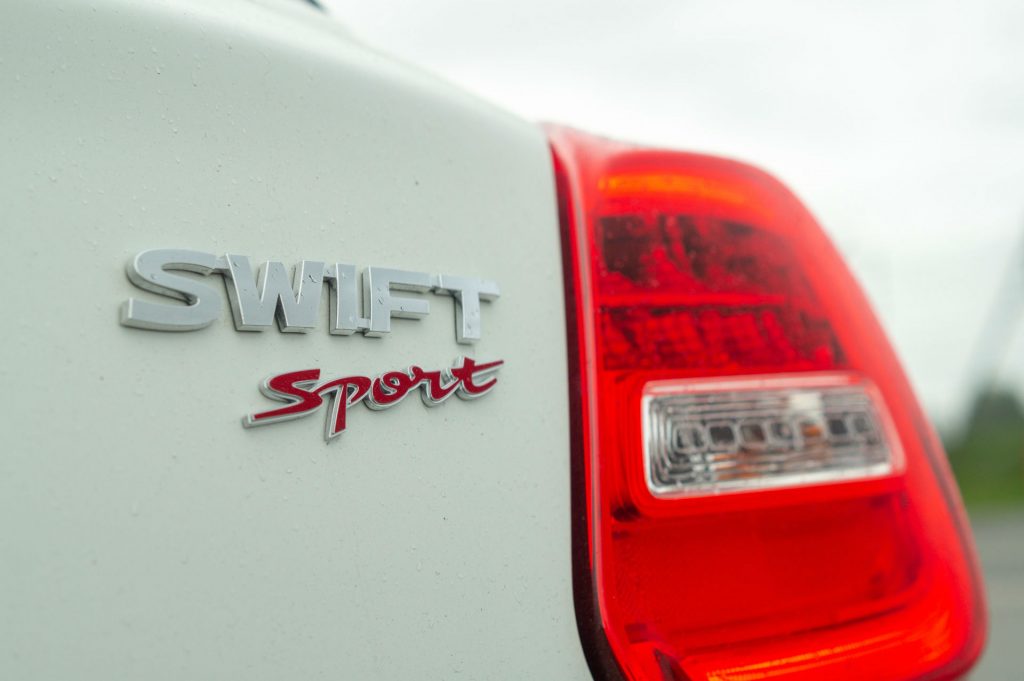 Ah, the all-important bit. Let’s take a trip back in time first.

What was so epically endearing about the old Swift Sport was the way you had to work it.
Granted, you could drive it around town below 2,000 revs and never see its rapid, B road eating side.

That VVT just loved to rev, in the same way VTEC works, a second lot of cams kick in halfway through the rev range. Its similar to having a turbo dump a heap of power, it just pulls and pulls. It rewarded you, making you feel engaged, you were part of the machine.

All the while you still wouldn’t be at licence losing speeds as you attacked some back roads. It never felt kill yourself quick, just rapid enough to have tons of fun. That character was mainly down to the engine. So what’s happened? 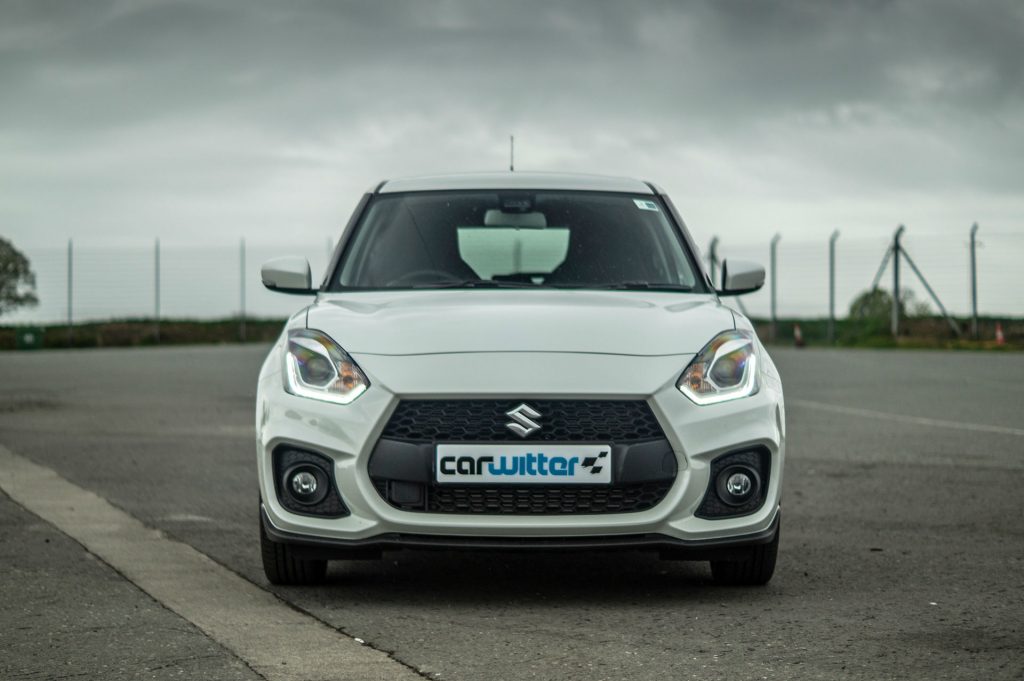 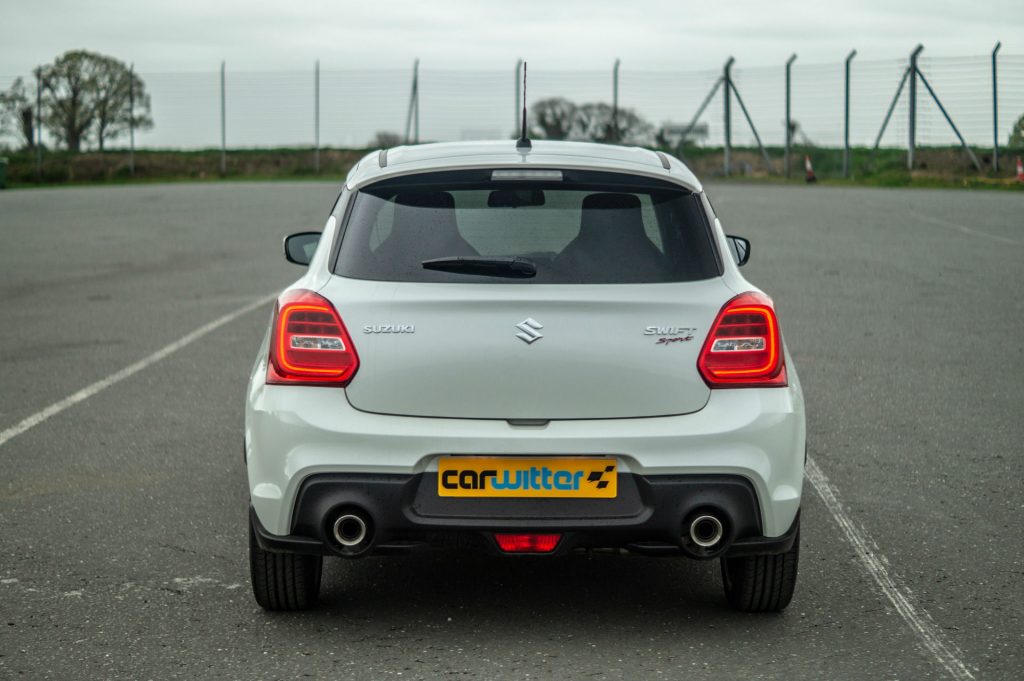 Well, the 1.4 BoosterJet is pretty damn quick, as we found in our Vitara S review a few years back. Plug that into a car that weighs 975 kilos, and it’s a hoot. The new Swift weighs 70kg less than the old one, that’s 11 stone. You’re basically driving around without a fully grown human tagging along.

Turboing isn’t a bad thing. Out of corners, there’s far more poke without the need to change down to keep pace, as with most turbos you can lazily leave it in fifth or even sixth for an overtake. 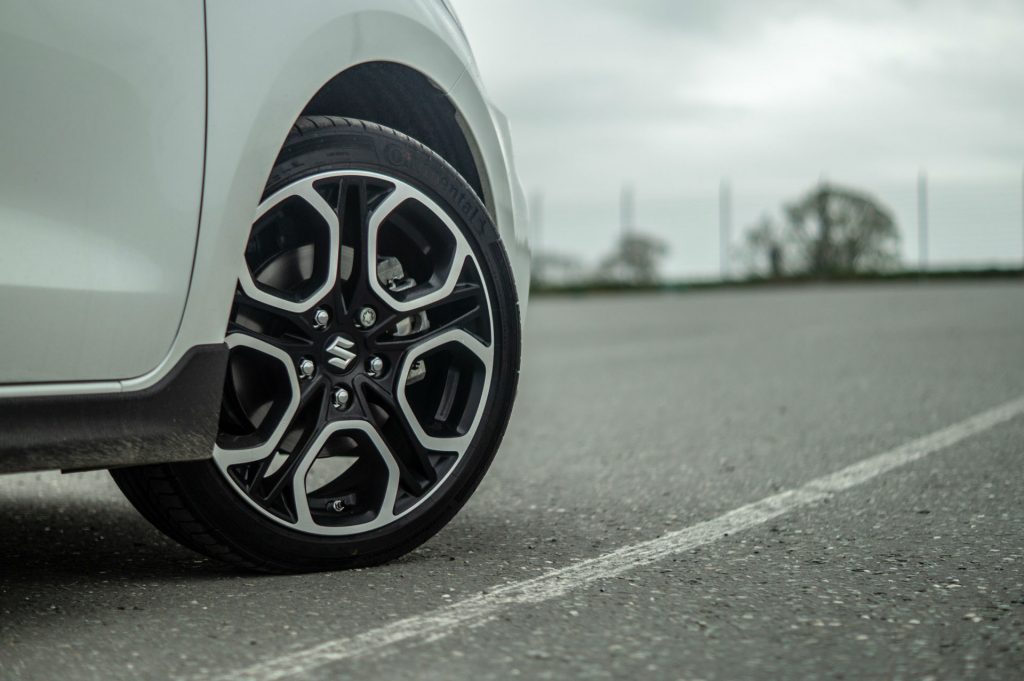 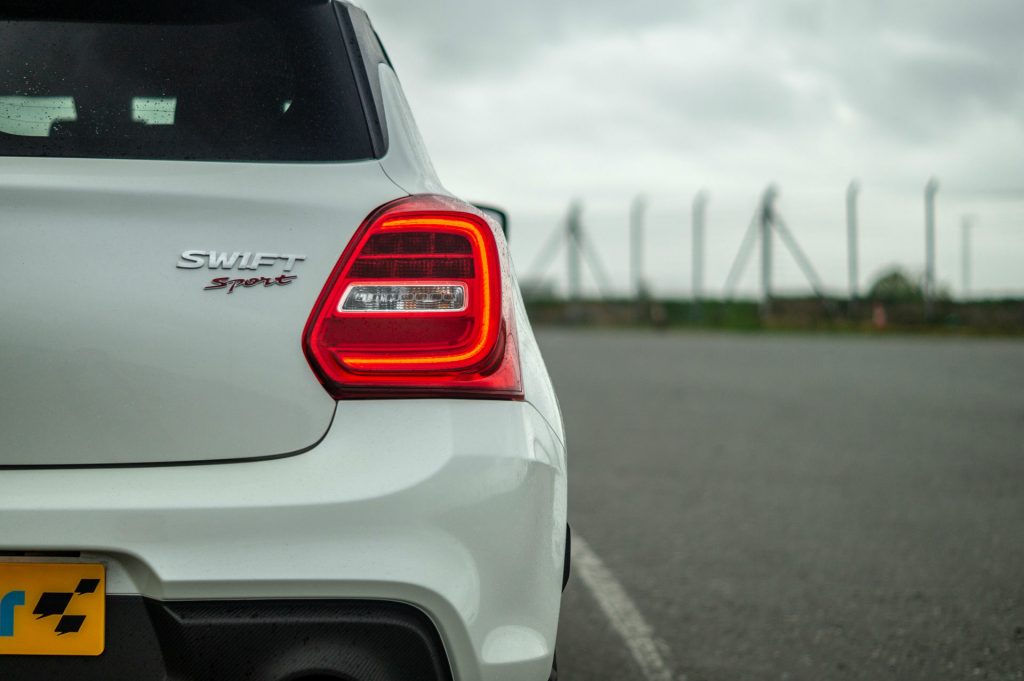 Oh, yeah I did say sixth there. The Swift Sport now has a sixth gear – praise the lord! While it was never a massive issue on the old one, it makes for a far more refined and usable all-rounder. Long motorway sections become a nice leisurely cruise, rather than being inside a buzzy little Terrier straining on a leash.

Turn in is sharp and while the ride is firm it’s not harsh, it will still soak up the rougher sections of tarmac without sending you to the chiropractor. Body roll could be better controlled, and even though the Swift Sport is light, it never feels particularly so. With the 208 GTi, you get a sense of tautness, as though the car and you were one, it flows with you through the corners, but that gelling of you and it, is absent with the Swift Sport.

You can’t unsettle the little Suzuki and play with it under a throttle off, turn in scenario. It’s planted, which is excellent, but that frisky nature is never found unless you’re really pushing…see below.

We also took the little Swift on track, which probably won’t ever happen if you’re an average punter, but it did show what the little Suzuki is like at its limit. The brakes hold on really well, after about 20 or so spirited laps around Mondello they still had near enough the same bite to them as when we started.

It’s also somewhat tail happy, jumping on the brakes in a straight line at speed will result in the back end feeling a little twitchy. It will fidget about as your scrubbing speed, something that’s reminiscent of the old RenaultSport Clio’s. 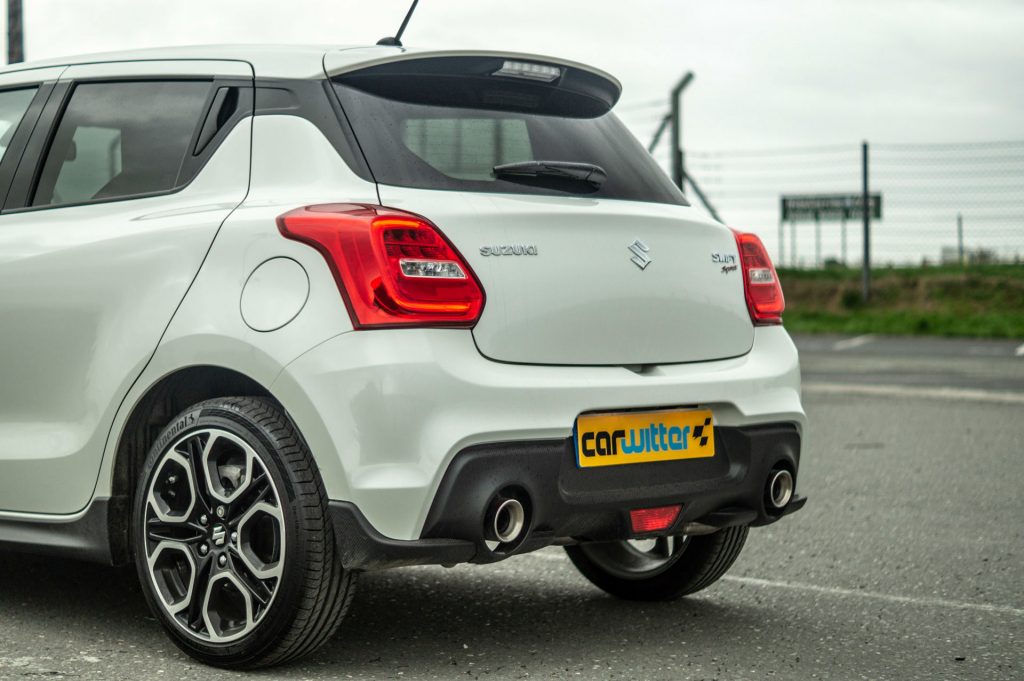 Taking that into account we’re pretty sure it would cock a wheel through a tight apex, but to get to that point, the Swift needs a fair amount of persuasion.

Some interesting technical bits to note are the new larger radiator to help aid cooling, which is backed up by a dual fan setup. The radiator helps heat dissipation by 34% while the extra fan gives 38% more airflow.

Interestingly the turbo is mounted directly to the cylinder head to effectively kill any lag; the exhaust manifold is also cast into the head to allow the optimum airflow.
The turbo runs at 1.0 bar of pressure, so could be tweaked to give another 20 or 30 horses in the future.

Monroe shocks are once again used all round; braking is taken care of thanks to some 285mm discs up front which are now 24mm thick. This helps reduce brake fade and disk temperature by 10% under repeated high-speed braking. 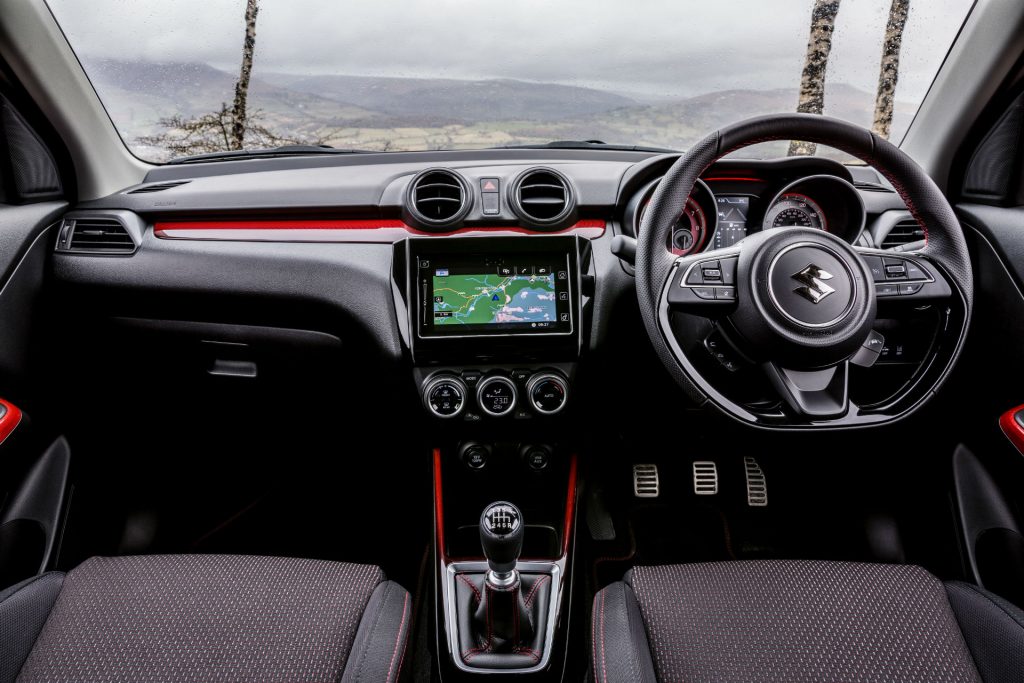 Inside you’ll find some rather hugging ‘Sport’ emblazoned seats. These follow on from the old car, you sit in them, and instantly they grab you. We found the limits of their embrace on track, but over some country lane blasts, you’ll be held firm.

Across the dash, you’ll find some red and black dippled ombre trim, red stitching on the steering wheel and gaiter and a fully loaded Swift. 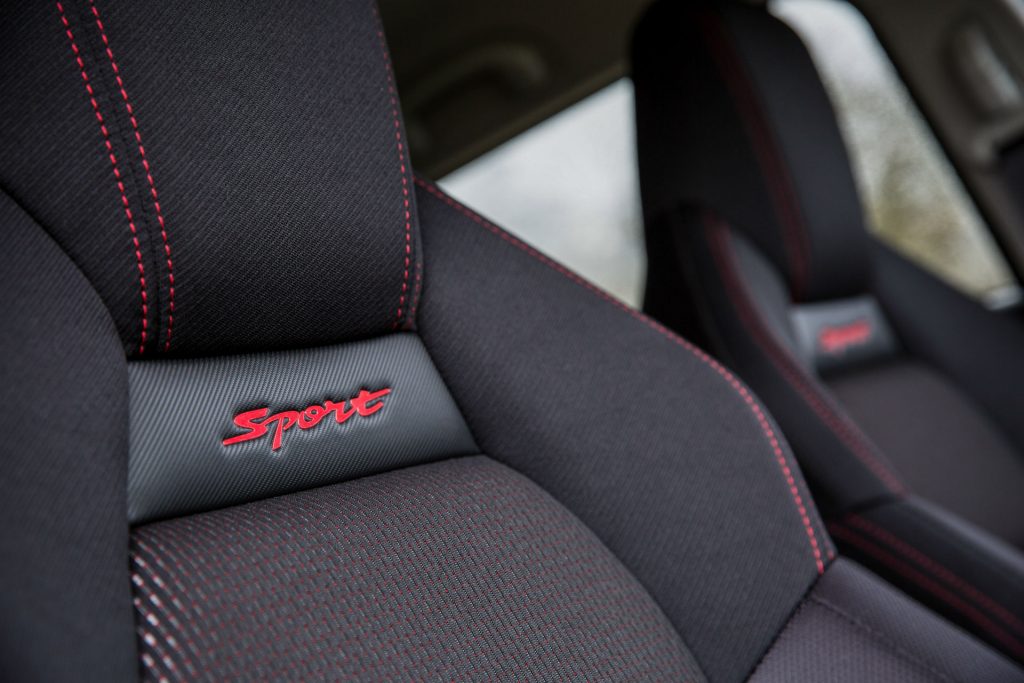 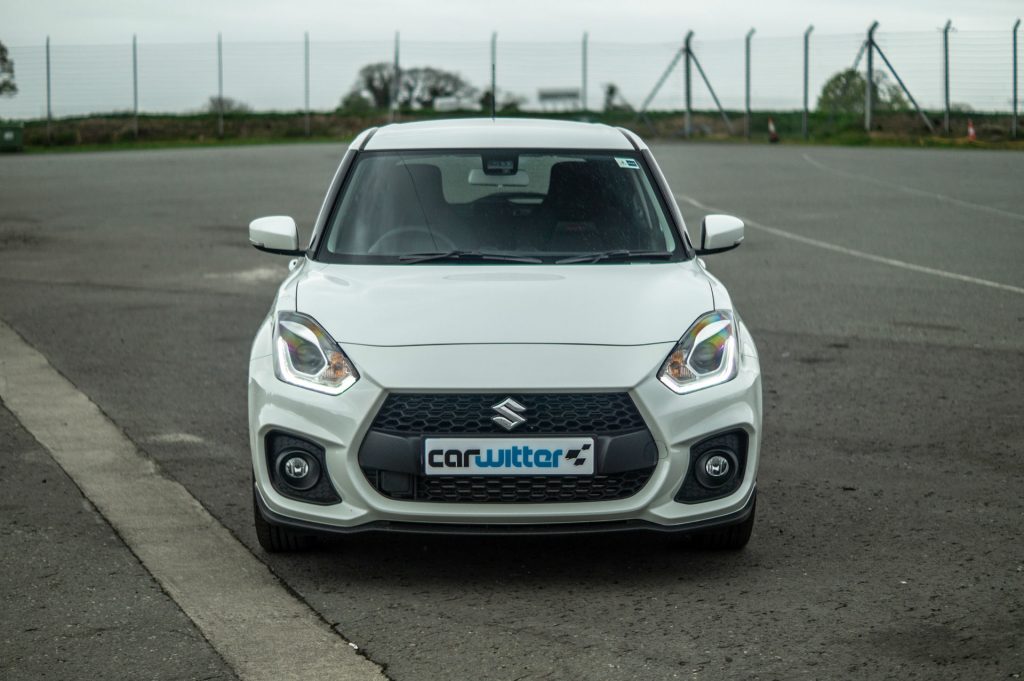 Suzuki is positioning the Swift Sport as comparable to the top tier 200 BHP fire-breathing hot hatches. That’s based on kit levels alone, which isn’t really what someone looks for if they’re after a rapid hatchback. Often its power and paper figures alone.

You’re not going to be down the pub arguing that your Swift Sport is better than a Fiesta ST because it has lane departure warning. 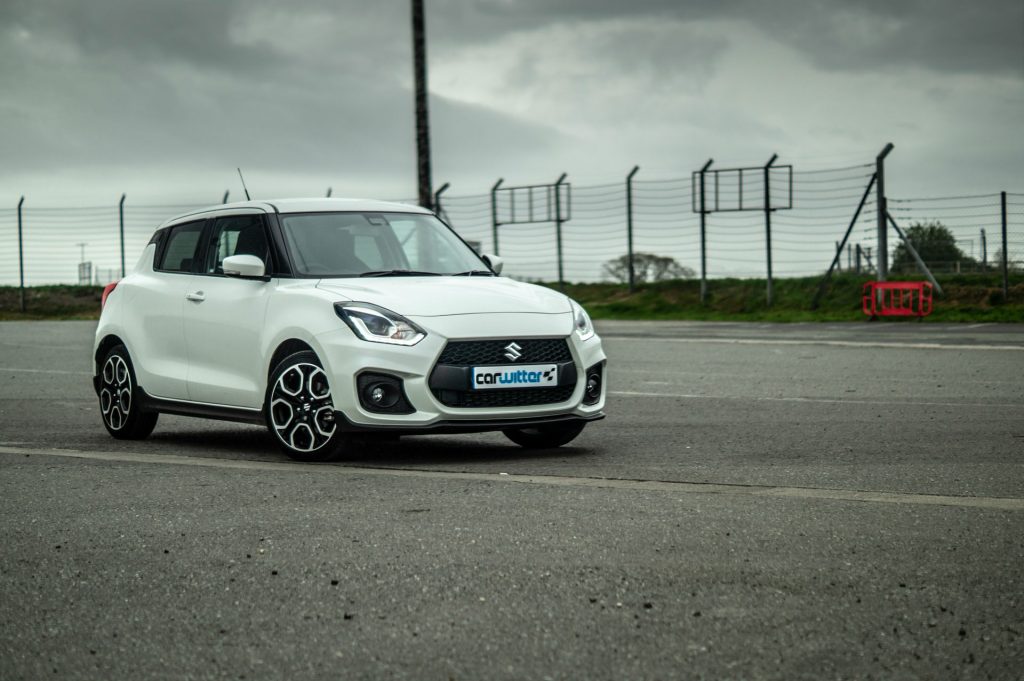 5 Tips to selling your used car