Having driven Audi’s TT before, in entry level guise we thought it was time to check out its most potent form, the RS. 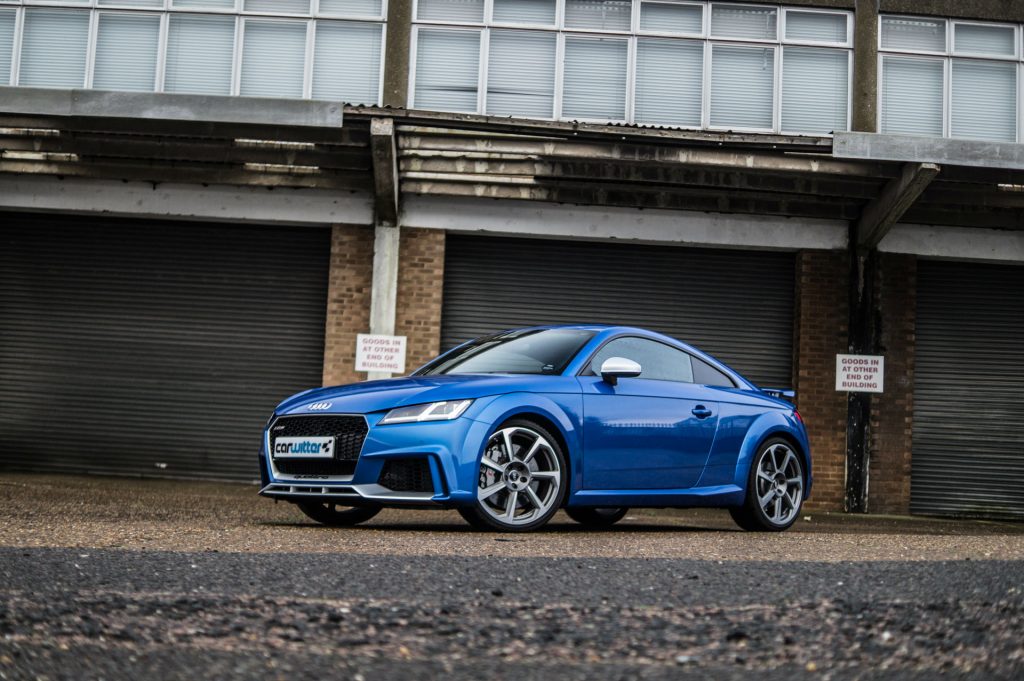 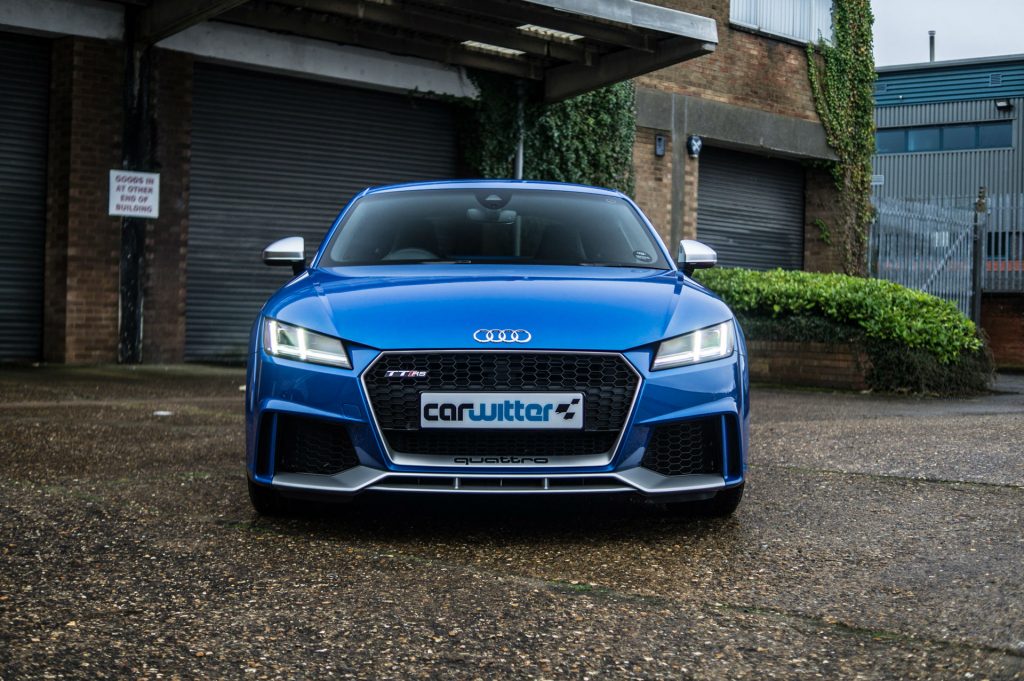 Now the current TT is a rather handsome beast, far more masculine than any of its forbears.

In RS form the manliness is turned up to 11. A massively wide front grille is missing the four rings, they’ve been moved to the edge of the bonnet for more prominence. Instead ‘Quattro’ is emblazoned on the silvered front lip, which contrasts the stunning Ara Blue paintwork. Intakes at the front edges are also shod in a matte effect silver to complete the mean looks. 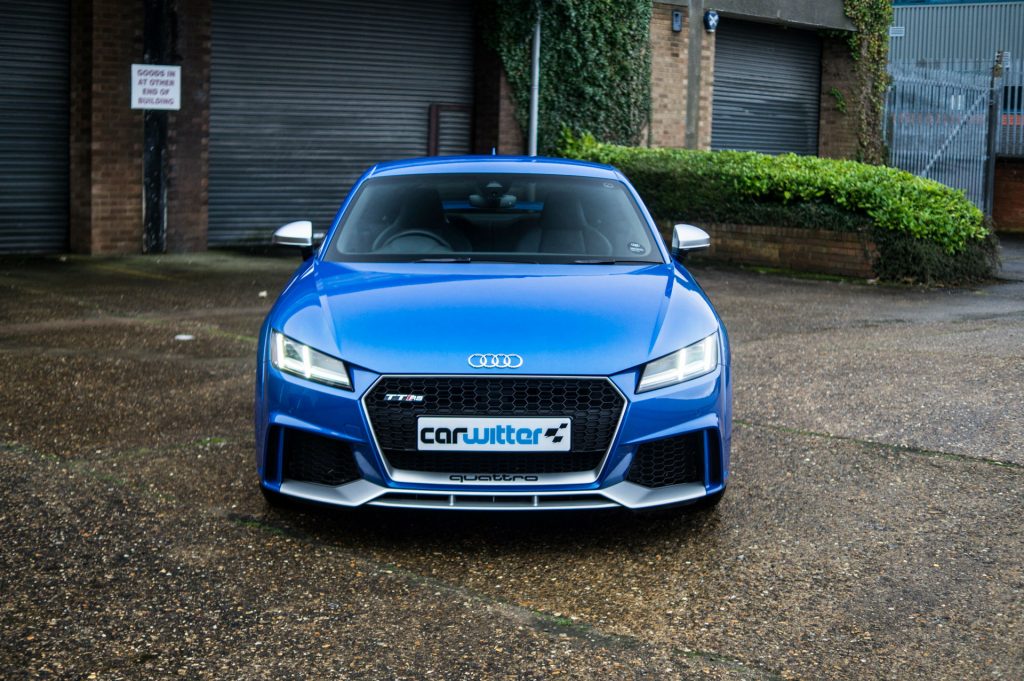 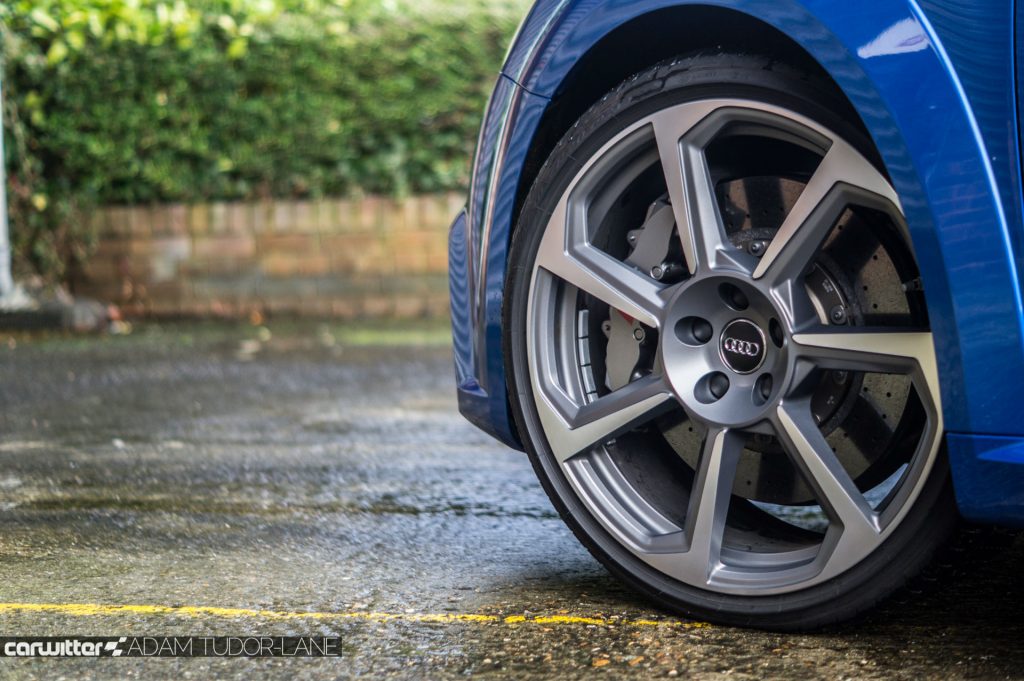 Those optional 20” alloys fit the arches perfectly, with deep side skirts adding to the sporty look.

At the back you’ll find those huge tell-tale RS oval exhausts pushed out to each lower corner, above sits a fixed rear spoiler…which does wobble a tad when closing the boot. 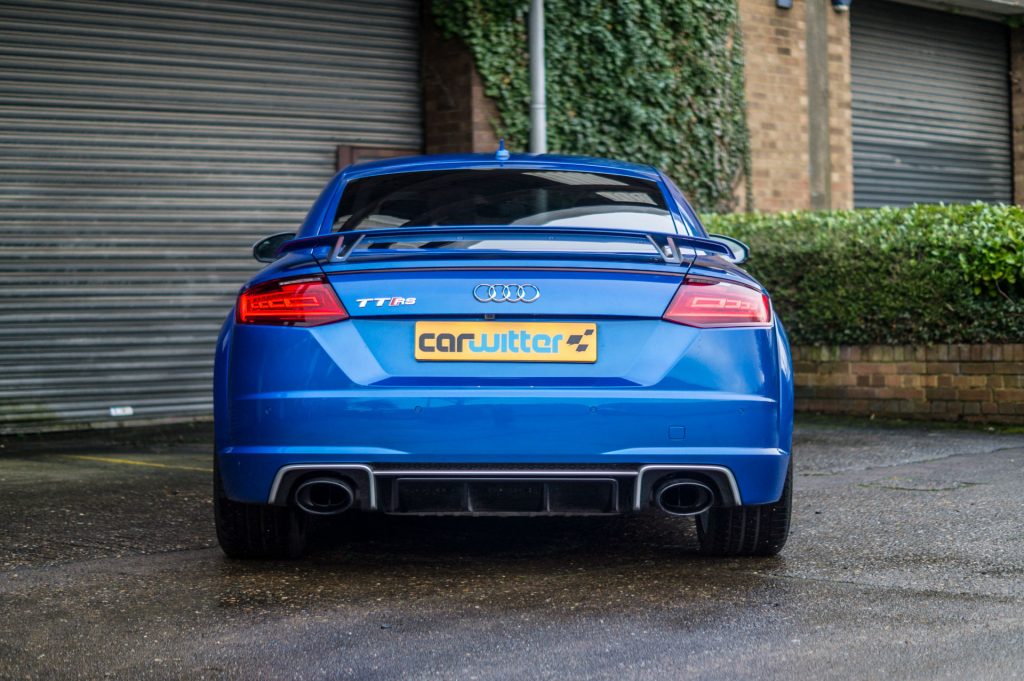 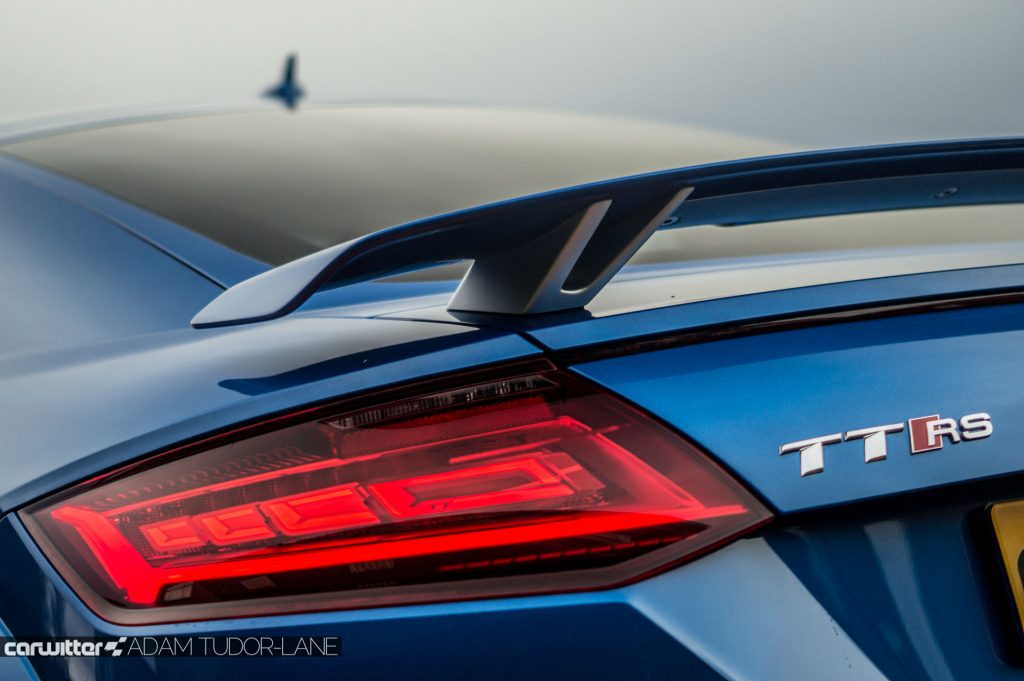 Supercar killing performance is the name of the game with the TT RS. Its 2.5 litre 5 cylinder TFSI engine produces 395 BHP and 480 Nm of torque. That makes it good for a 0-62 sprint in just 3.7 seconds. This is what that looks like.

Put that number against Audi’s halo car, the R8 V10 Plus, and that takes 3.2 seconds. So you may be slower by 0.5, but in the process you’ll save yourself roughly 90k. Oh, and the TT is far more practical to park. 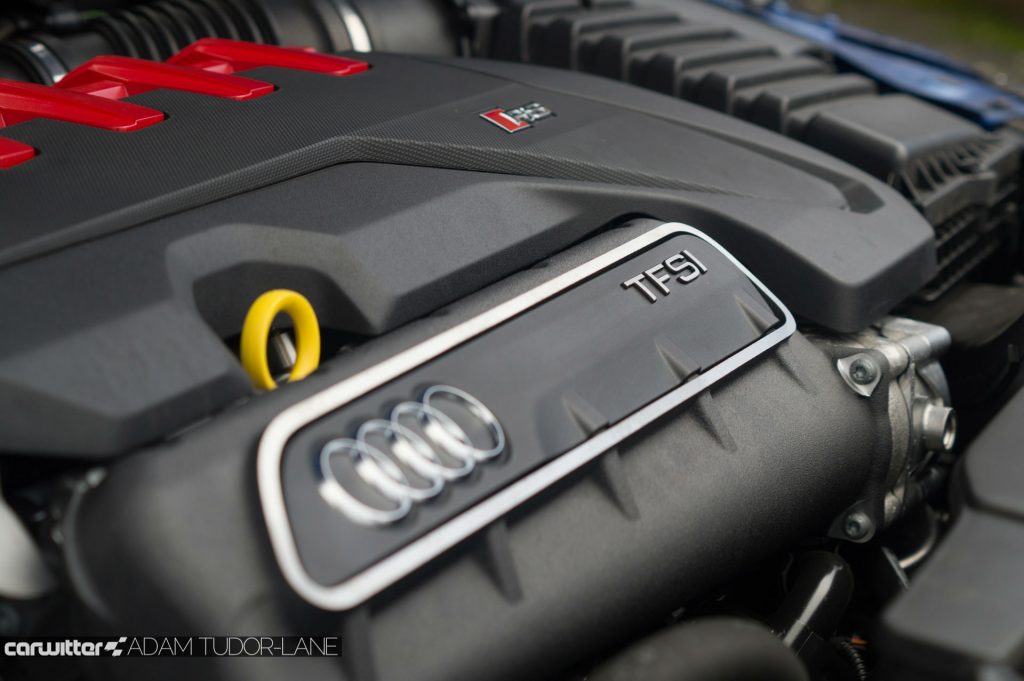 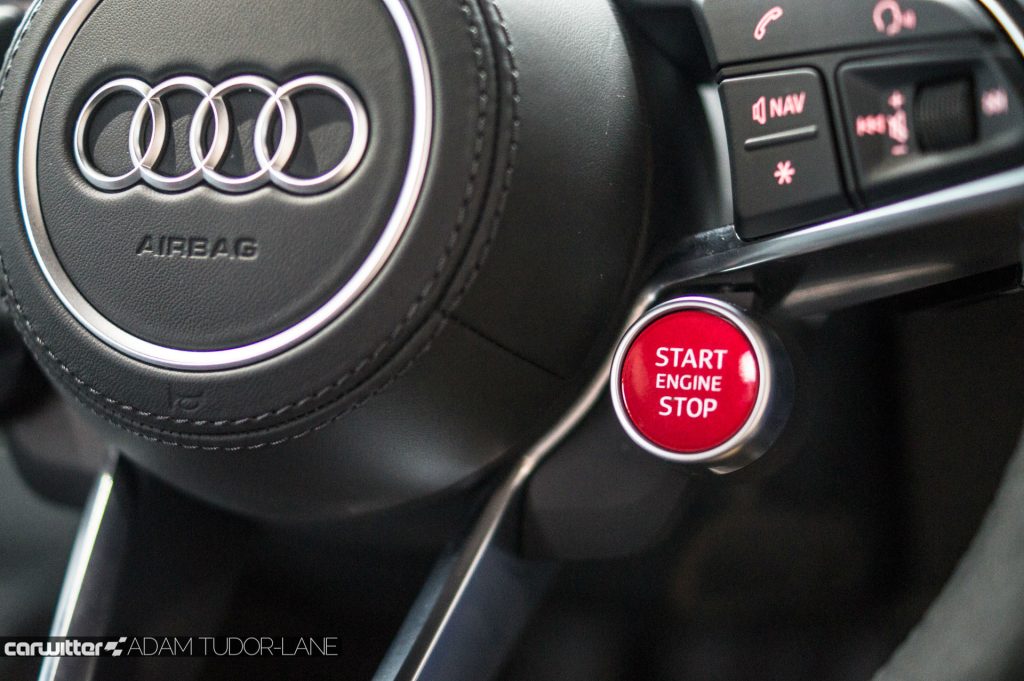 Thanks to its Quattro all-wheel drive the TT RS gets those horses onto the tarmac with ease, in pretty much any condition. In the dry the grip feels endless, enabling to you to squeeze on the power mid corner without any worry of the back end heading sideways; as you would in some sports cars.

But when you’re on it and cornering hard you can feel that the RS want’s to push wide. The edges of understeer start to creep in, making the TT feel far less sporty than it should.

In a straight line it’s blisteringly quick though, truly point and shoot. It needs no finesse on the pedals, just whack your foot to the floor and it will go. No drama.

Power is sent via the 7 speed S Tronic gearbox, it’s a match made in heaven. It enables you to leave it to its own devices and fire you off into the distance. Or you can take full manual control and let those revs sing out to a redline of 6750 rpm. 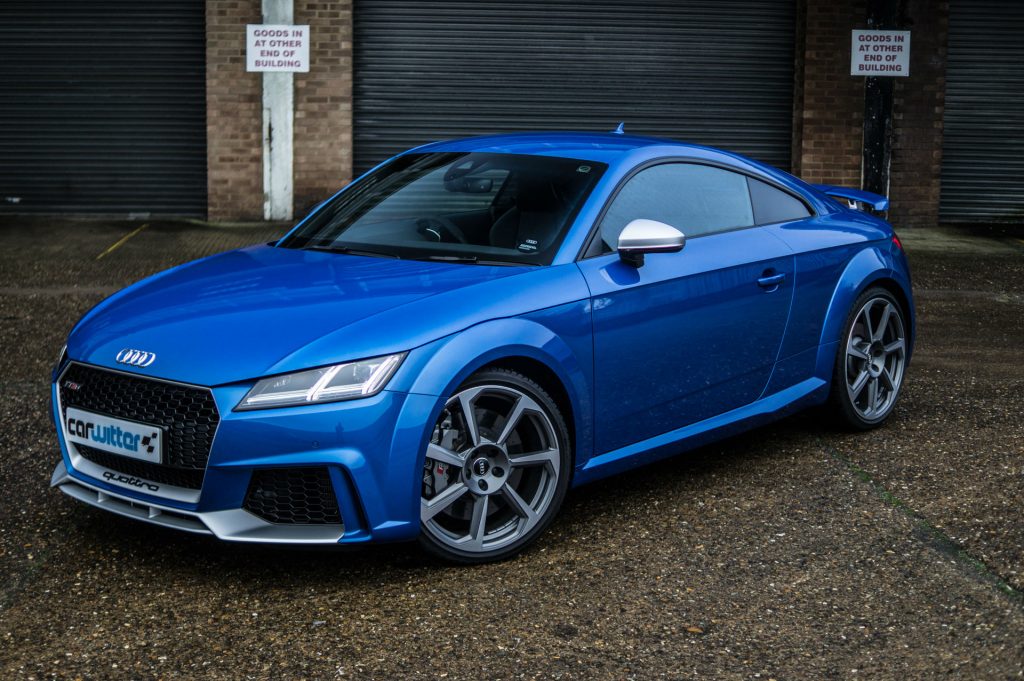 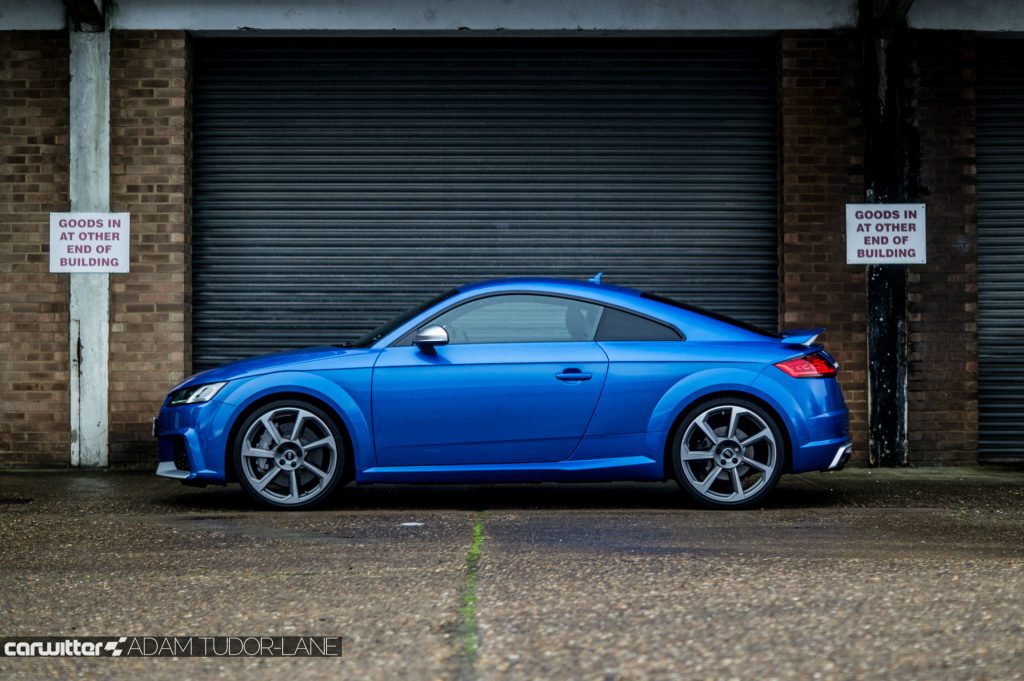 Our car was fitted with the optional Magnetic Ride suspension system (£995), it helps switch up the dampers from firm and rigid, to comfy. Whilst the changes are slight, they do make a difference. Personally, I could live with the TT in ‘dynamic’ mode all the time, it’s not crashy nor too harsh.

Carbon ceramics can always be a tricky thing, sometimes they take a bit of warming up to give proper bite. That wasn’t an issue with this setup, from the off they grab with such power. After an extended B road blast they held up fine, with all but a little squeal as they cooled down on the run home. 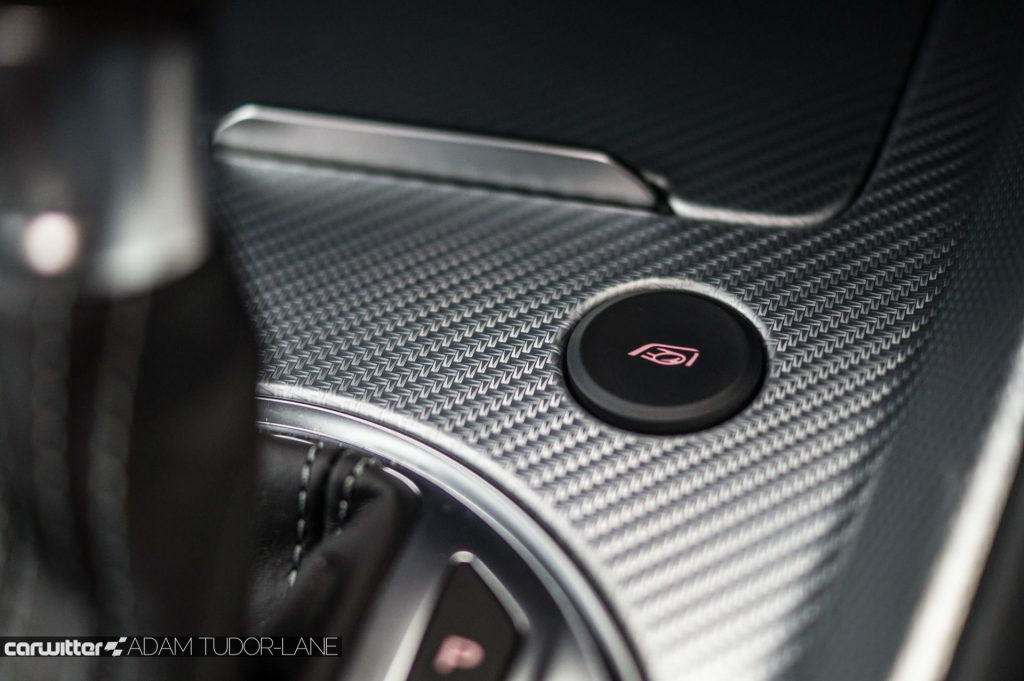 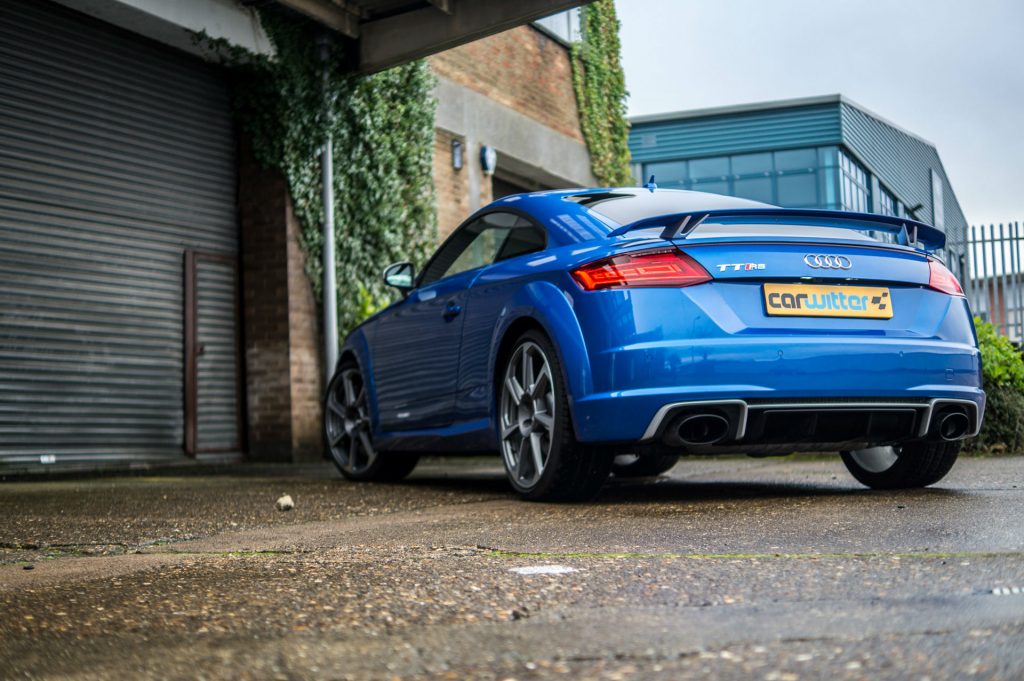 Another optional extra was the RS Sport Exhaust system, why that’s optional on a £52k ‘performance’ car I’ll never know. It does the same as any other adaptive exhaust system, valves open to bypass silencers, giving you an aural delight.

Whilst it sounds good working your way toward the rev limiter there’s not much else going on in the lower range. You feel left wanting when you compare it to the cacophony that an F-Type makes at any speed. 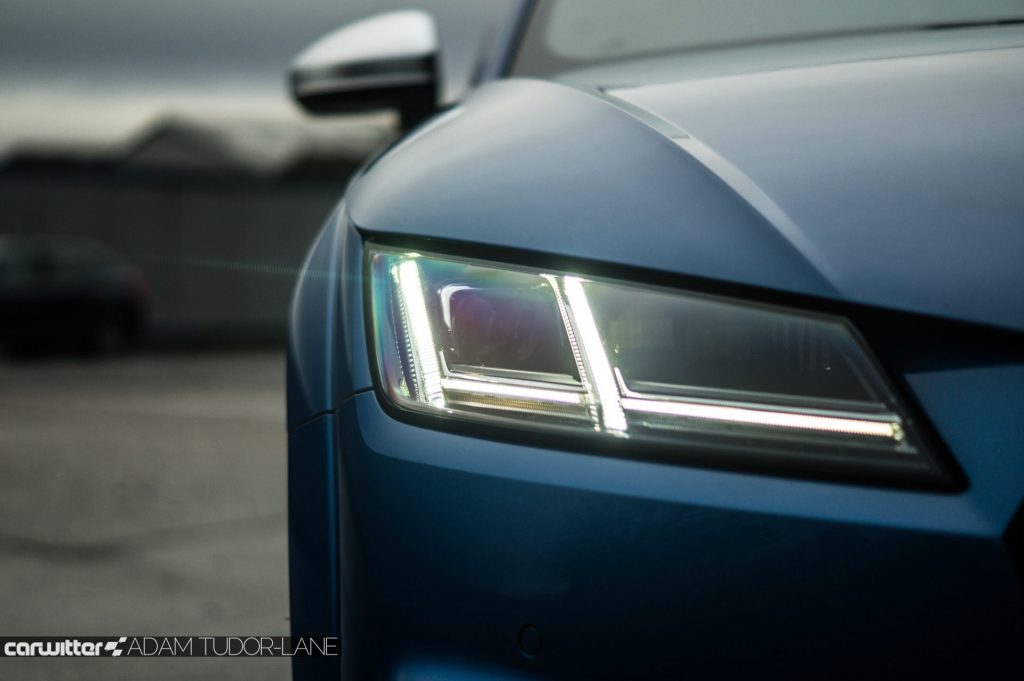 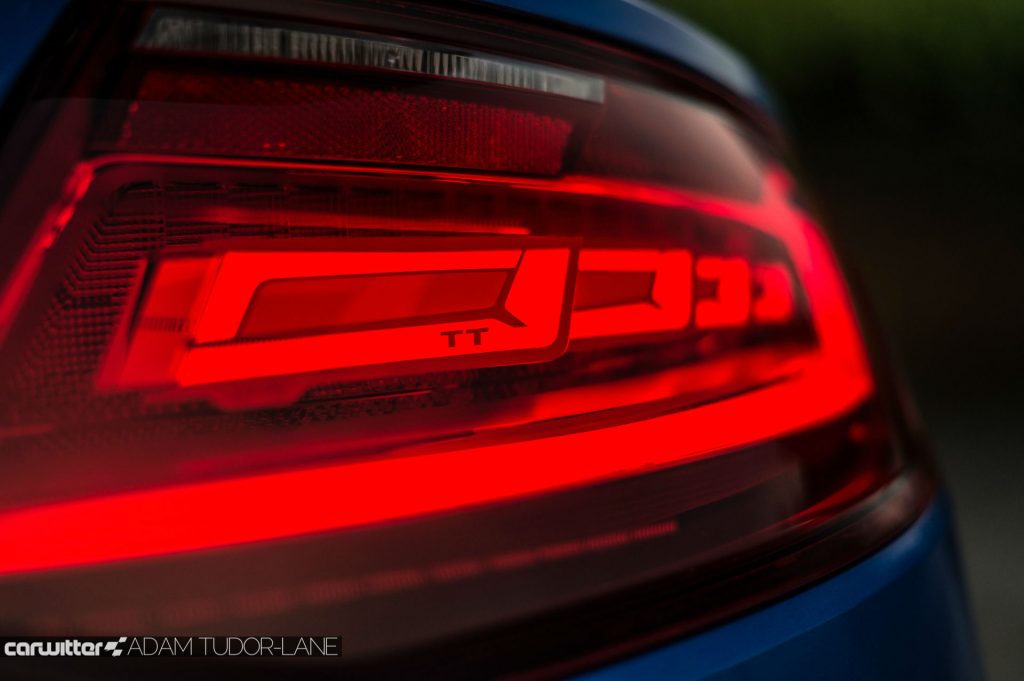 The spartan dash remains in the RS, with the only infotainment being centrally located in the drivers’ binnacle, a truly clean and classic design. Spot on Audi.

There are a few RS flourishes throughout, namely the alcantara steering wheel, some knurled effect metal across the centre console and doors, paired with a set of gorgeous diamond stitched leather seats. 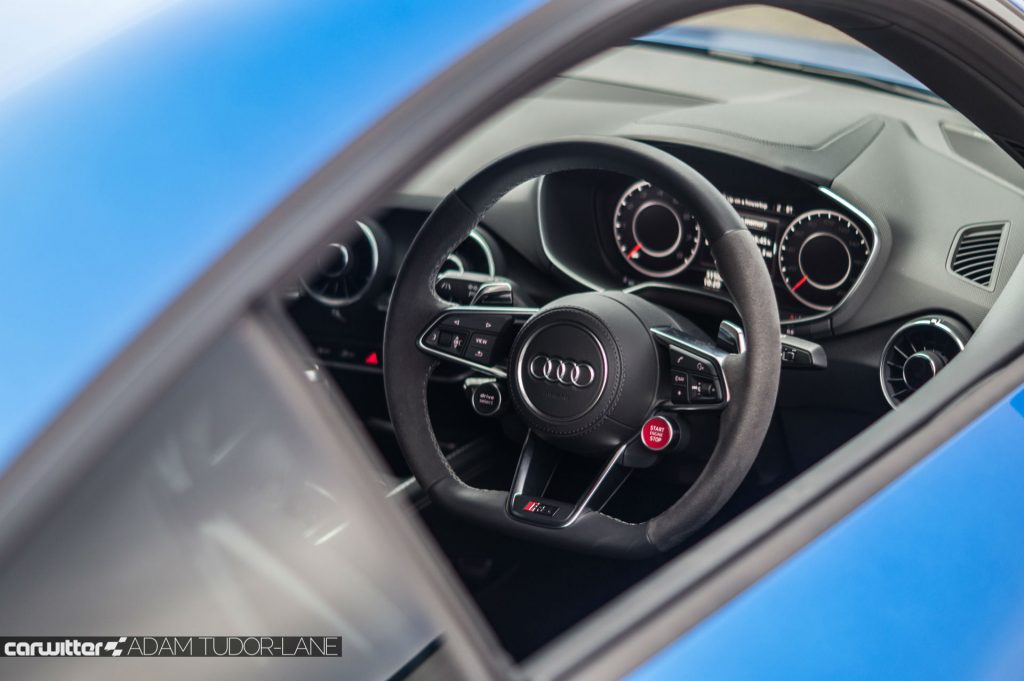 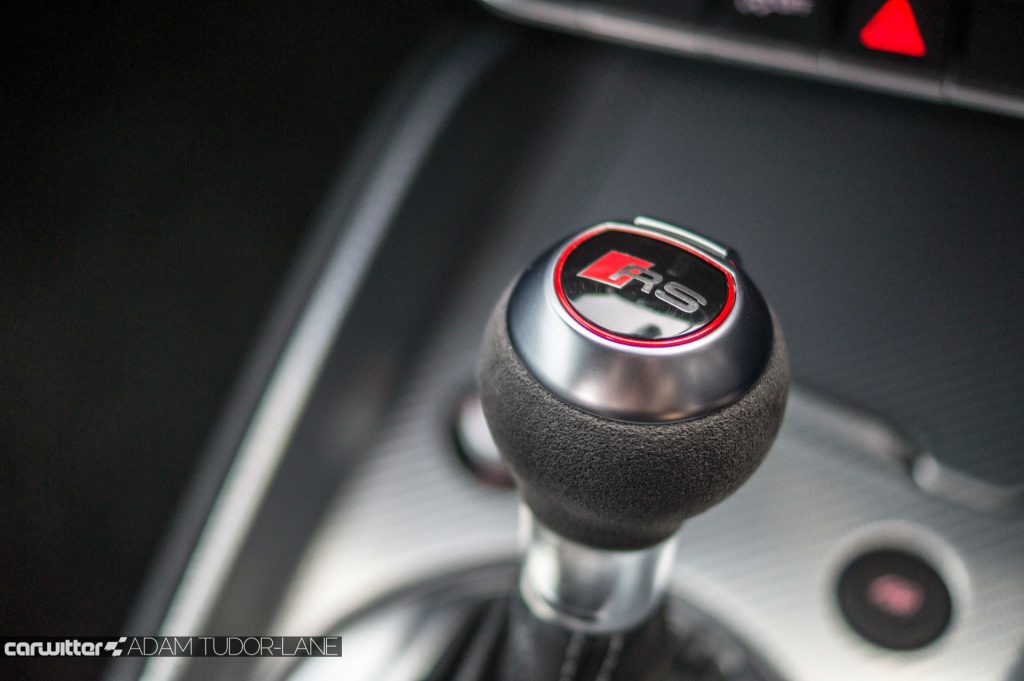 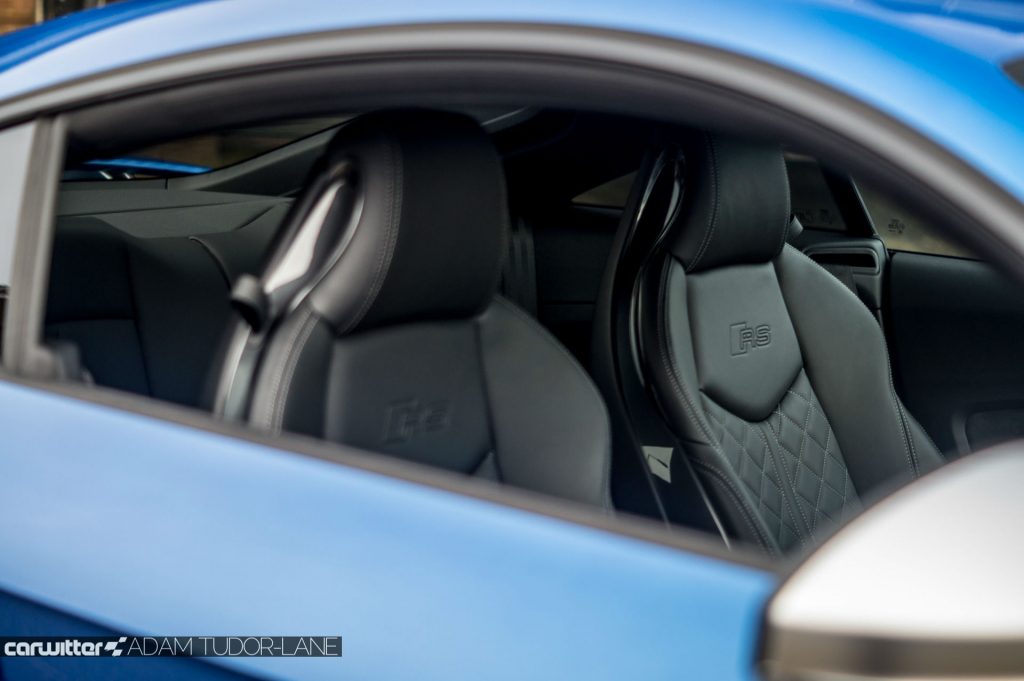 Whilst £52k, well £68k in this case, is a crazy amount of money for what is an Audi TT the performance punch it packs is well above its pay grade. More useable everyday than an R8, and nearly as quick as a Nissan GT-R to 100mph it’s hard to knock the RS. 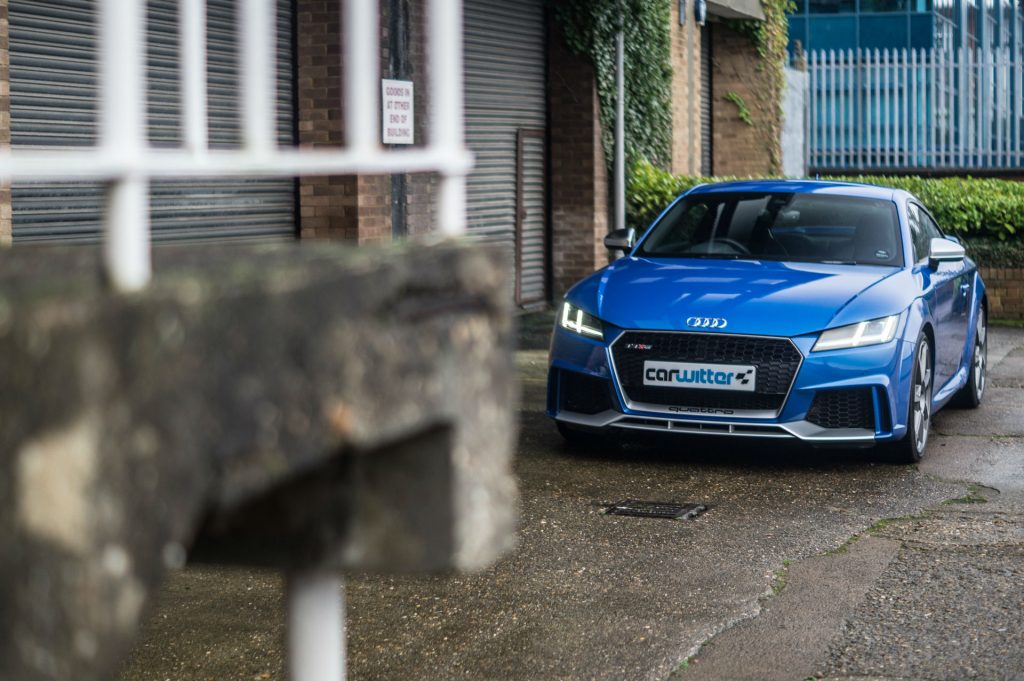 Thanks to that 5 cylinder it packs more of a punch than the Cayman these days, but for similar money you could have a Cayman GTS. It’s slower to 62 by nearly a second, and it’s down on power by roughly 30 horses. But the Porsche is mid engined, so will feel far more poised, with a cleaner turn in.

And when someone asks you what you drive, a Porsche sounds better than an Audi. 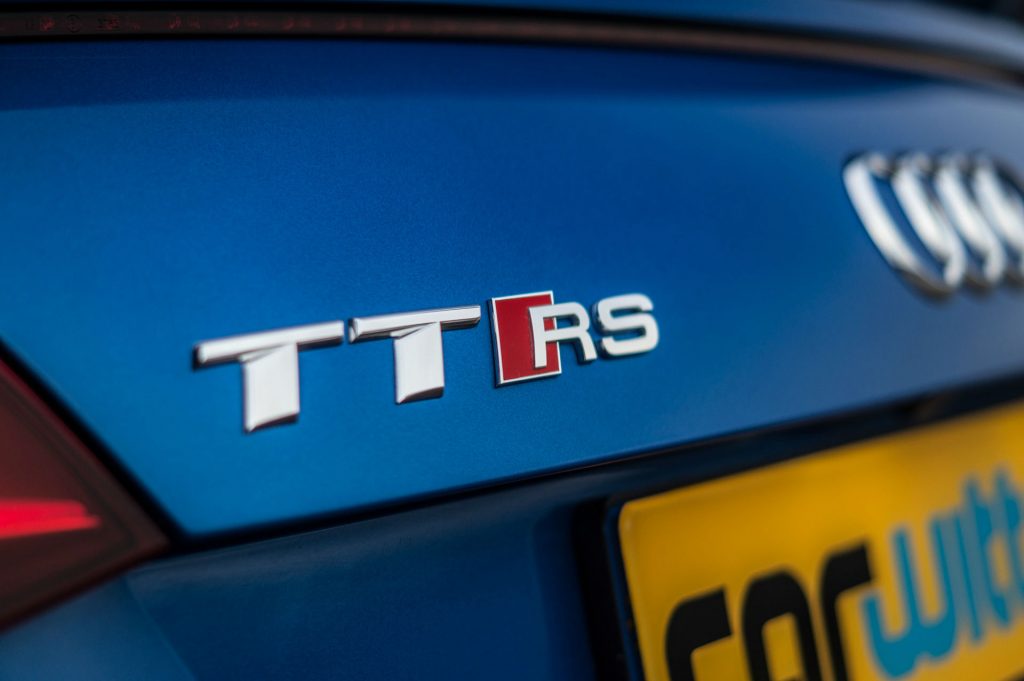