Peugeot have left it very late to enter the crossover market. They say the new 3008 is a SUV or an C-SUV, but let’s face it, it’s a crossover, aimed squarely at the likes of the Qashqai.

Leaving it late is a double edged sword, whilst they can fit it with cutting edge tech are they too late to capitalise on an already affluent market?

That frumpy, bulging thing from a few years back is most definitely gone with this reincarnation of the 3008. It’s metamorphosed from a portly MPV into a sculpted crossover.

A bold, stubby front end gives the new 3008 a mean purpose. That wide grille has a concave shape to it which is pleasingly unusual, and each headlight is split by the front bumper.

On upper trim levels you can opt for a two tone roof, and chrome adorns the sides, roof and rear bumper. In fact there’s a bit too much chrome going on here. We welcome a ‘black edition’ in the future. 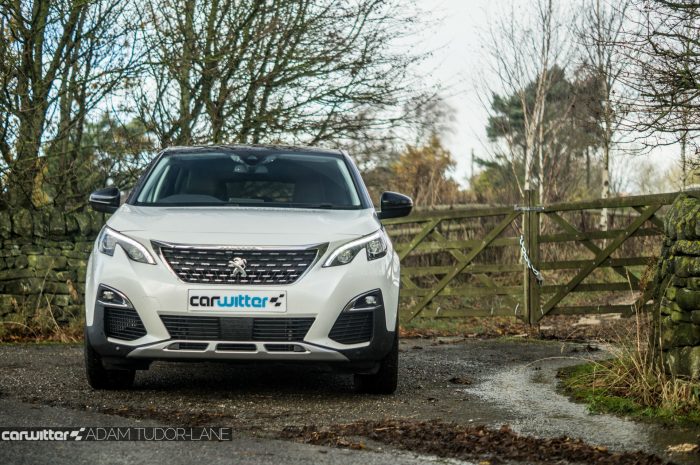 At the back you see the claw rear lights, these illuminate whenever the car is switched on, and they flow into a black band than runs just below the rear window. It’s a smart design feature, and when you compare it to a Qashqai, Kadjar, or even a Q5 the looks of this lion blow the competition out of the water. 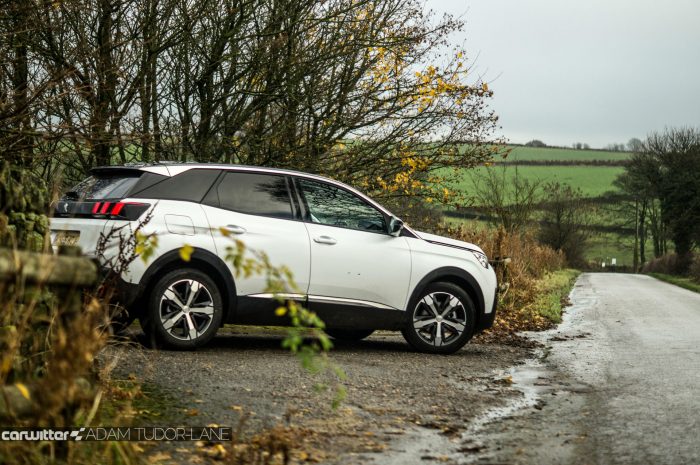 Peugeot say the manual 1.6 diesel will be their biggest seller. With 118 BHP and just 104 g/km of nasties you can see why. It pulls pretty well lower down the rev range, but as the speeds increase it tends to run out of puff.

It’s also rather noisy, almost as if diesel clatter is being played through the driver’s dash speaker. All the time you get that diesel chunter, but it seems even more prominent when in the captain’s chair. 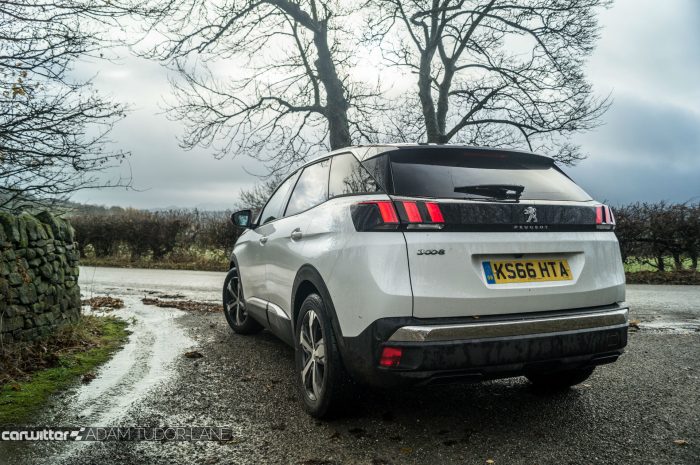 Switch to the 2.0 litre diesel and that din is quietened dramatically. If you opt for the GT model you can also have augmented sound played through the speakers when in Sport mode. Yeah, it’s a marmite thing.

As for the petrol gang you can opt for a 1.2 turbo – which is a very good engine in everything else we have tried it in – either with a manual or an auto. But if you want 163 BHP you will need to pick the 1.6 THP with start stop, strangely this can only be had with an auto gearbox.

The petrol performs admirably, it’s vastly quieter than the 1.6 diesel. The 1.2 petrol was absent from the launch, so we can’t comment on that. But with the dieselgate fiasco fresh in people’s minds, there surely has to be a percentage switch to petrol, so it seems strange the THP doesn’t have a manual option. 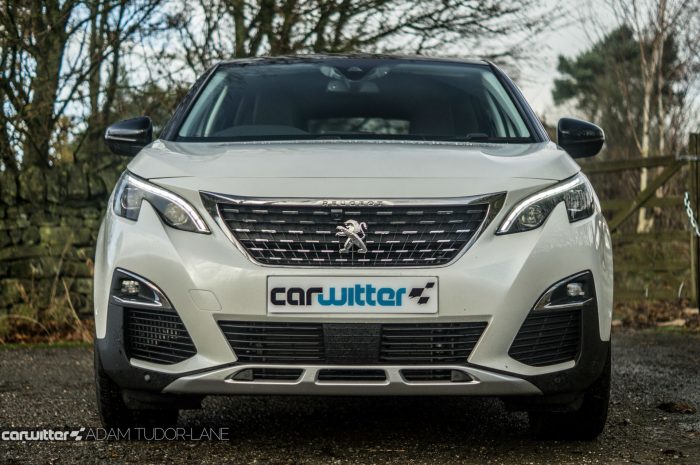 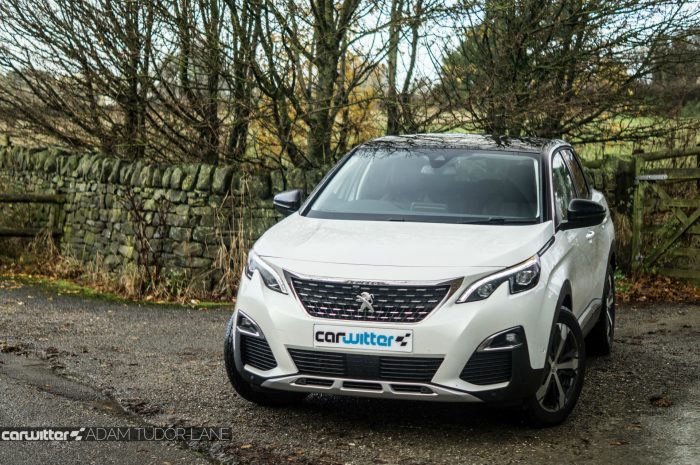 Ride feels a little stiff, you will feel imperfections in the road, especially when on the big 18” alloys. That would no doubt improve a little if you bump down a wheel size, but it seems as though firmness has been opted for in favour of body control.

Lean in corners is managed well, and you can even push a little in the wet without too much understeer creeping in.

The dinky steering wheel gives little sensation as to what’s going on beneath you. I thought it would feel comical and toy like in a car this big. But it’s perfectly fine, lock to lock is good and it’s not at all skittish, which is a worry we had beforehand.

In the manual the gear stick seems laughably high, until you realise that you can change gear whilst having your arm on the central armrest. It then makes perfect sense.

Peugeot have fitted a plethora of driving aids too, in fact it drops the insurance 9 places over the old one, to just group 11 for the new 3008. Lane departure warning, Automatic Emergency Braking, and Distance Alert Warning are all standard from the entry level Active model. 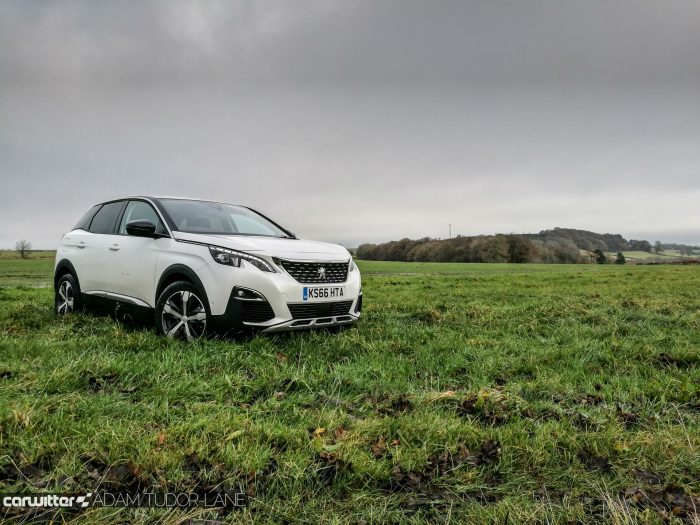 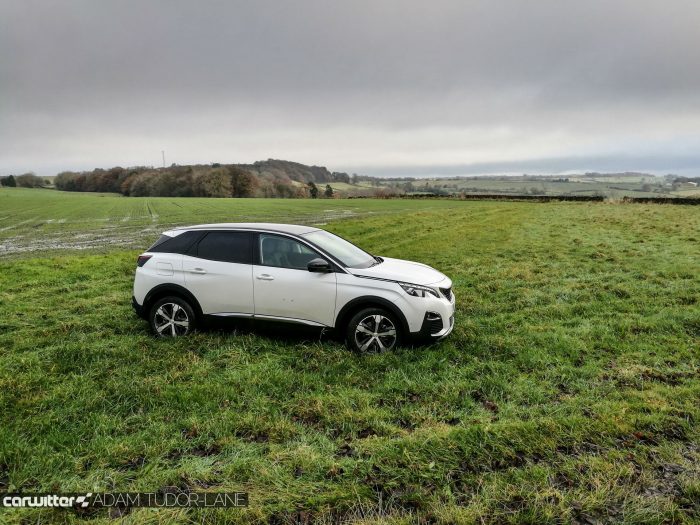 A quick mention needs to go to Peugeot’s trick Grip Control setup. Instead of offering a fully blown 4×4 setup, Pug fitted the new 3008 with its Grip Control system. It works with the traction control as a sort of pseudo four wheel drive. It has different settings for Snow, Mud and Sand, which calibrates the system differently depending on the condition.

We took it into a rather soggy field to see how it fared. Driving to the middle of it we stopped, turned around and went back out over the long grass without issue. Having used the system on Sand before we can assure you it works, and works well. It’s a modest £250 box tick. 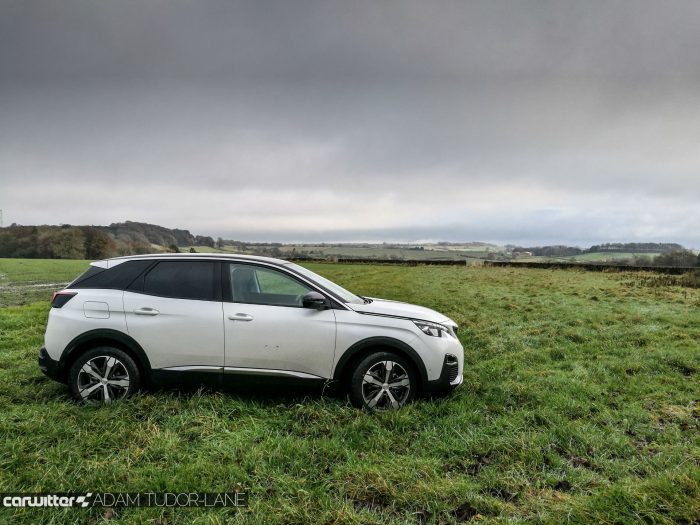 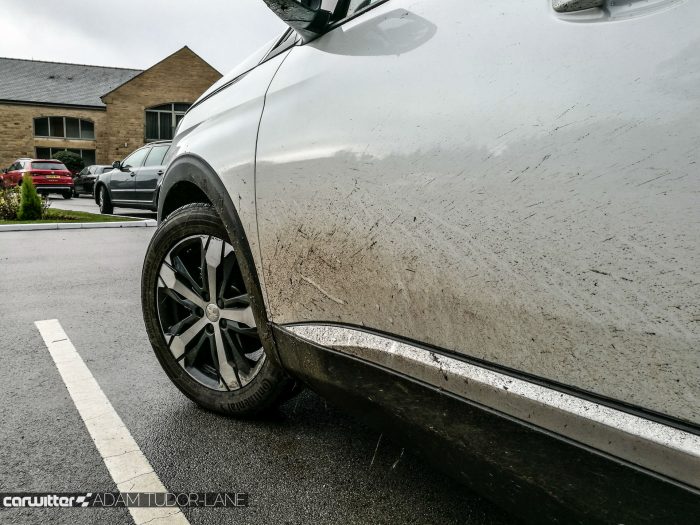 This all new 3008 is Peugeot’s debut for its i-Cockpit. Gone are the manual dials in favour of virtual ones, a completely customisable setup can be had. It’s what Peugeot needed, to bring themselves more up market and in line with the likes of Audi.

It works. The interior is stunning, almost concept car in appearance. Mood lighting is standard across the range which really lifts the interior at night, fabric is used as a trim across the dashboard and on the door cards. It’s modern and different, not bland and Germanic. 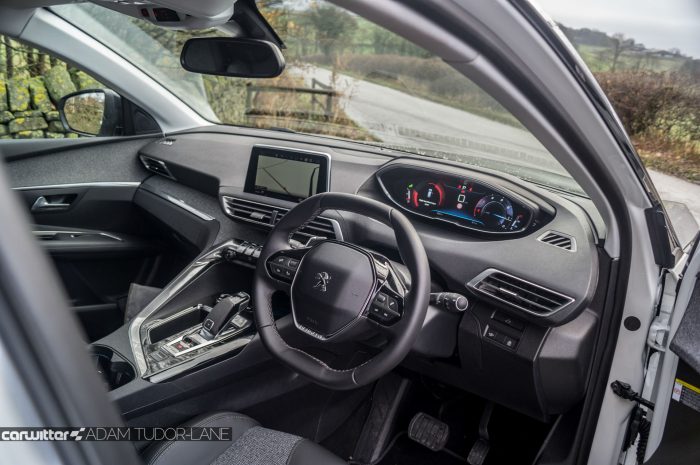 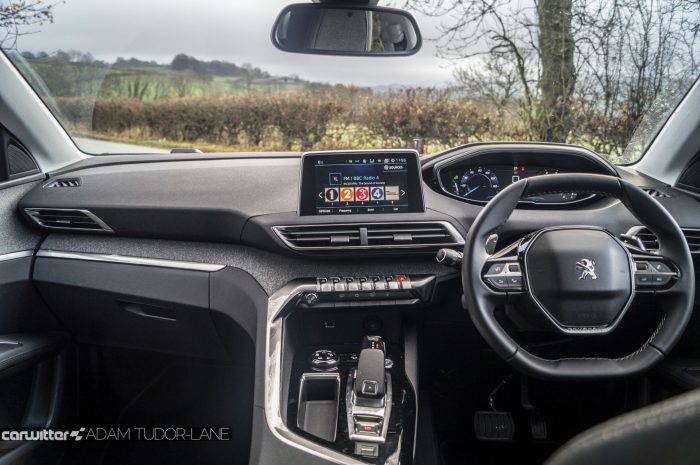 There are a few niggles. The infotainment system was meant to have ‘smart phone’ levels of responsiveness. It’s a damn site better than the abomination that’s to be had in the current Peugeot line up, but it’s still not quite instant, which is a shame. 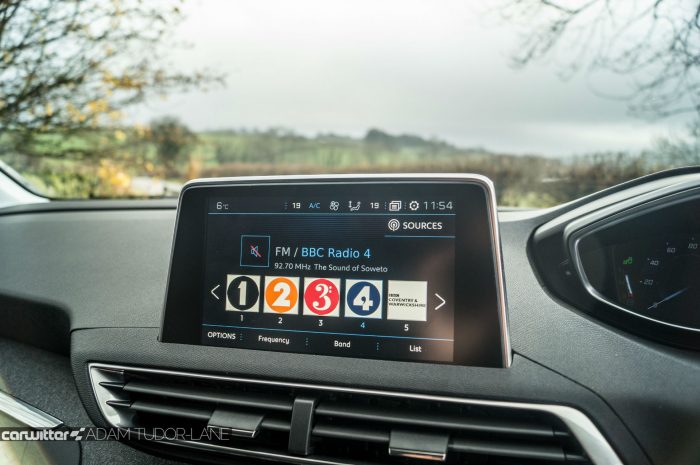 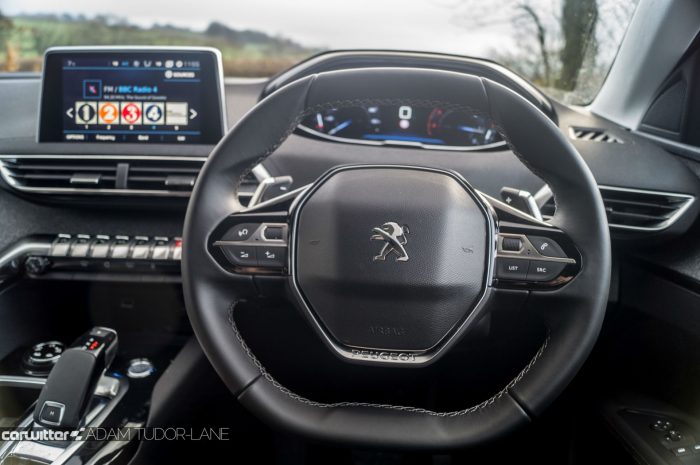 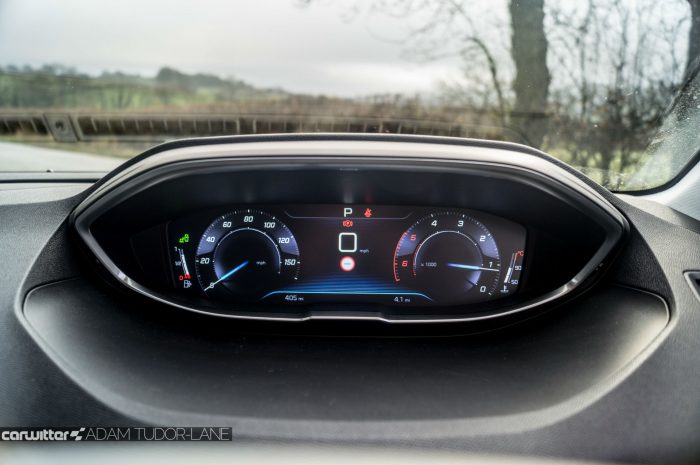 There’s plenty of room in the back for a normal sized human. With an average height driver the legroom is almost BA 1st class, head room is also fine. If you spec the panoramic opening sunroof the interior becomes bright and airy.

Gone is the split level boot of the first generation, in favour of a one piece affair that apparently cuts down repair times by 10 hours if you have a shunt. Capacity is 520 litres which is nearly 100 more than the Qashqai. 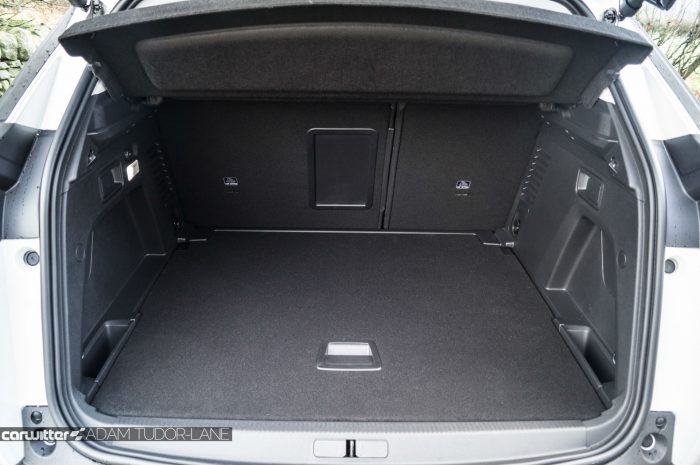 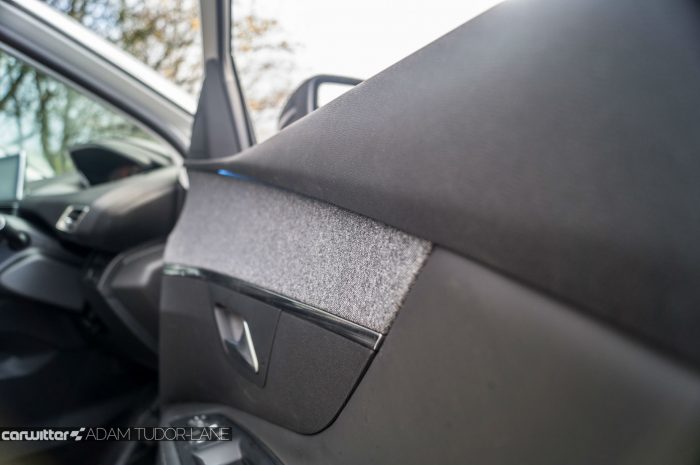 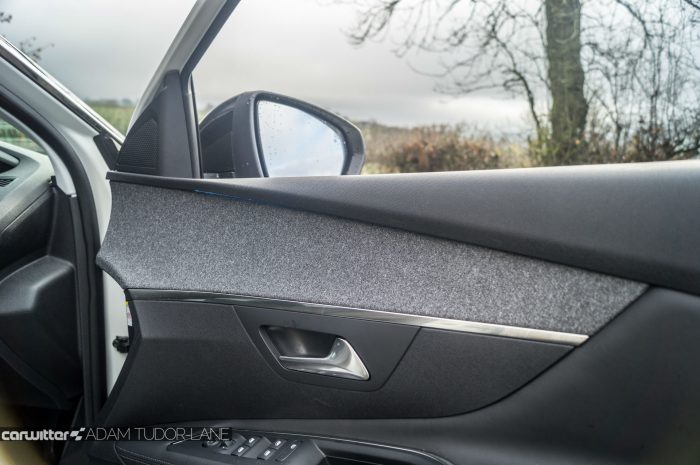 Without doubt the interior and exterior of the 3008 is head and shoulders above the current competition. It’s stunning all round.

If you need a bit more poke then the 1.6 litre THP is really very good, but you have to have it with an auto box, you can only have it in GT Line trim too so the price starts at £28,295.

Diesel wise the 1.6 BlueHDi is ok, its average, it will amble along noisily doing its thing but that’s it. Average.

Trim wise aim for Allure, it’s middle of the range and benefits from the 3D Connected Nav, the full suite of driver safety systems, reversing camera and the rear tinted windows. Allure starts at £23,495 for the 1.2 litre petrol. 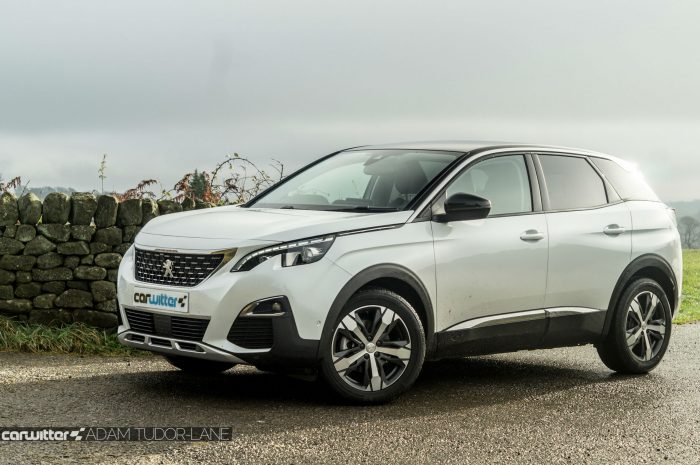 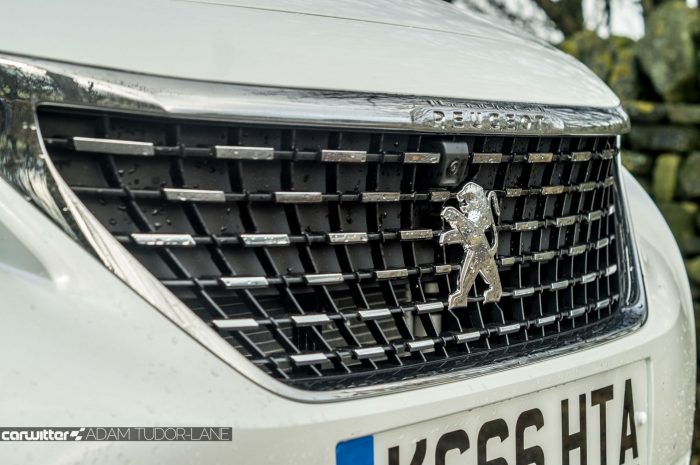 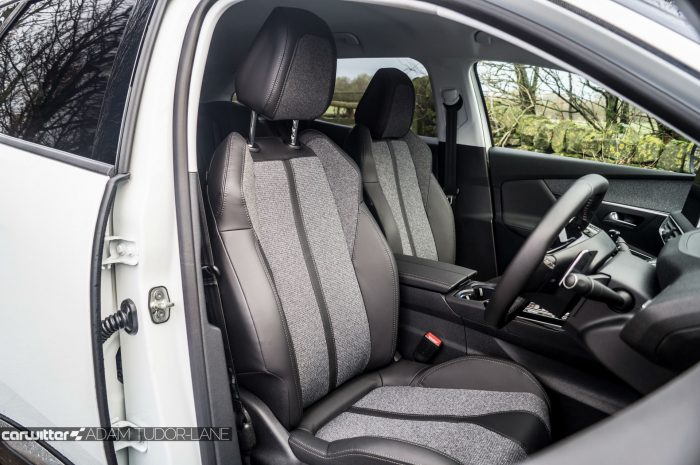 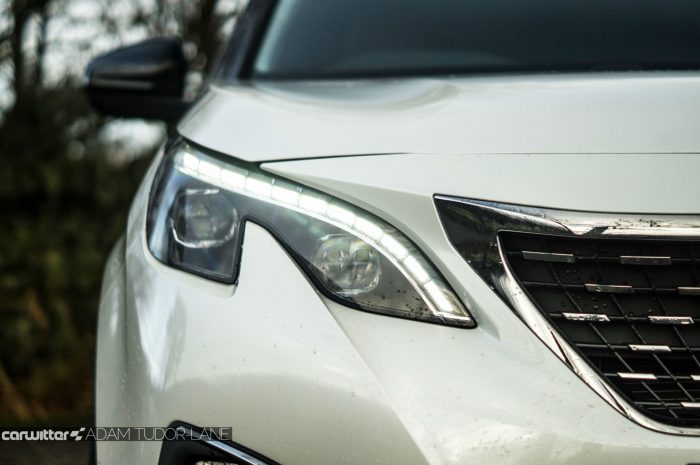 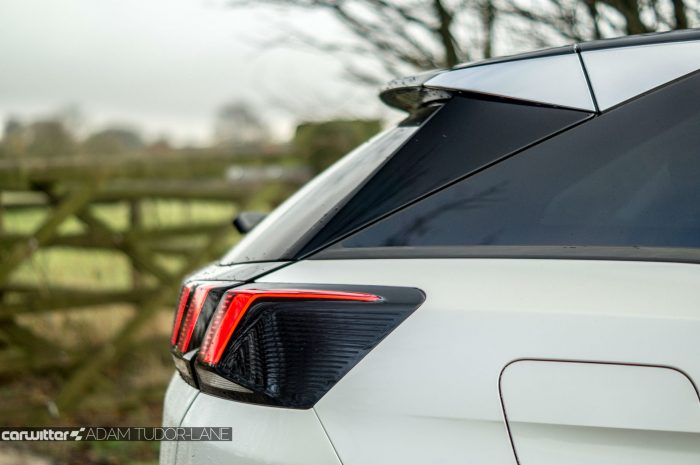 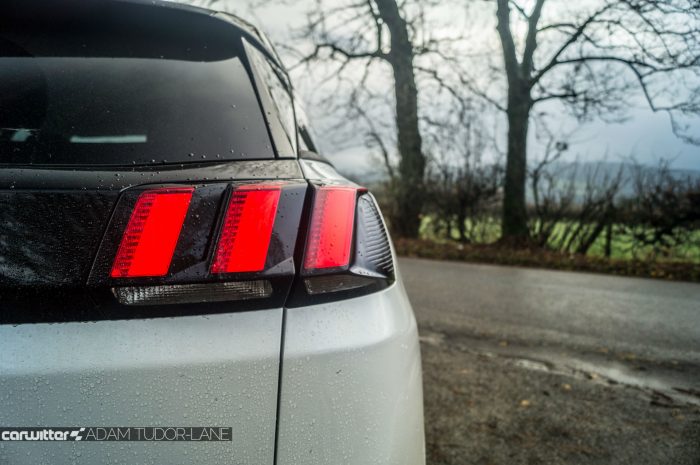 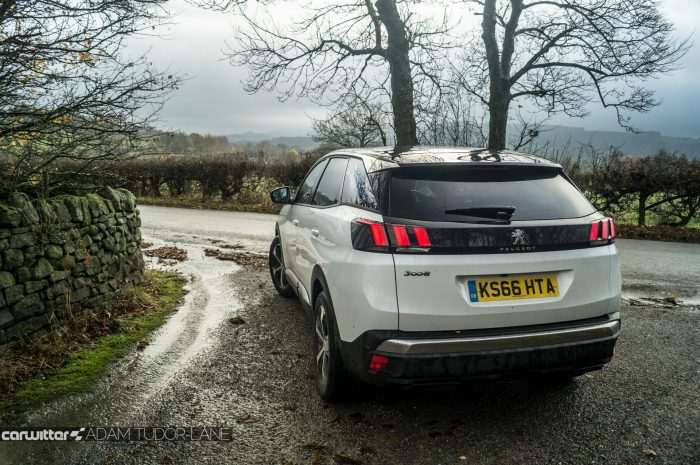 The 2017 Ford Fusion Hybrid is packed full of safety tech