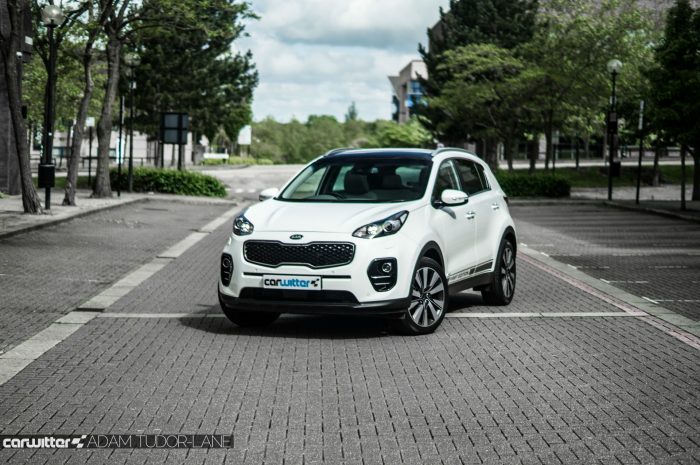 Kia’s Sportage is a big deal. It accounts for 29% of the brands UK sales, so when the fourth generation was launched they wanted to make a big deal of it. Queue the ‘First Edition’. Coming in at a whopping £31,650 it has EVERYTHING slapped on it.

Powered by a 2.0 litre diesel engine making 182 BHP and 400 Nm of torque it will get to 62 in 9.2 seconds. Fitted with an auto ‘box the First Edition has four wheel drive as standard. 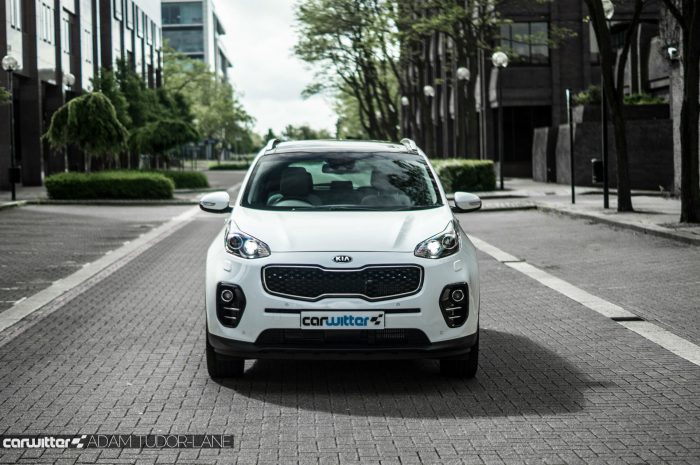 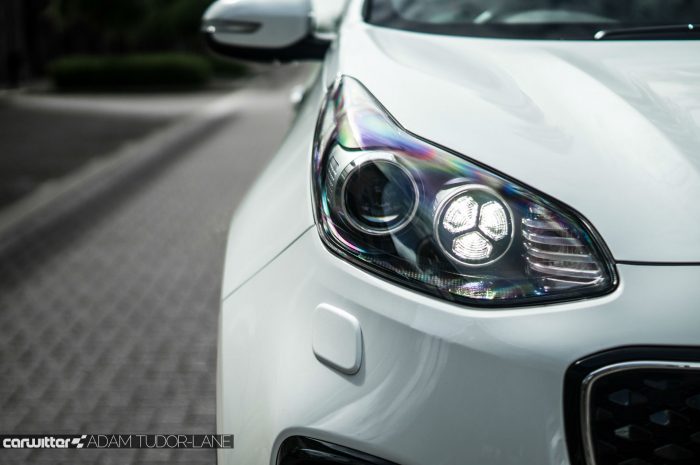 Kia have really upped the looks with the latest Sportage, it’s far more modern and from some angles dare we say pretty?
From the front it looks like a moon buggy, wide set headlights make it reminiscent of the Subaru Tribeca…but far more handsome!

The large tiger nose grille gives it a mean presence, and the back end looks equally as smart with an awesome light signature and central chrome detail, making it look far wider than it is.

Out of the current gaggle of crossovers it has to be the freshest and best looking. 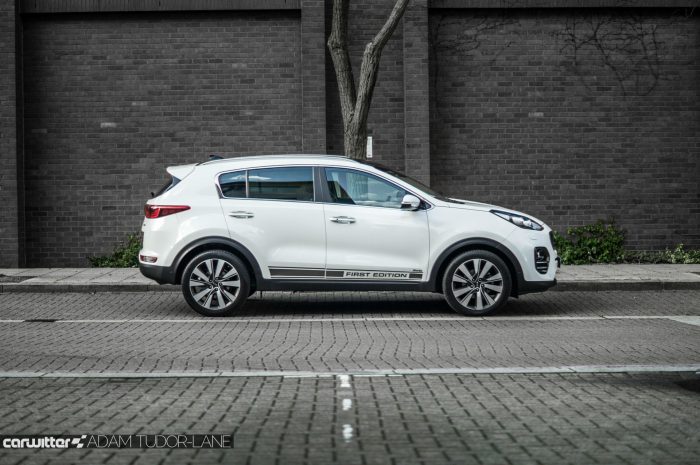 Thanks to the 400 NM of torque the pace is pretty good from such a big car. The Sportage only weighs in at 1690kg which helps, and when you press the Sport button everything livens up nicely.

Steering feel is good, sharp enough for a car this size but it can be a little too sensitive at times. It’s far more communicative than the old model though. 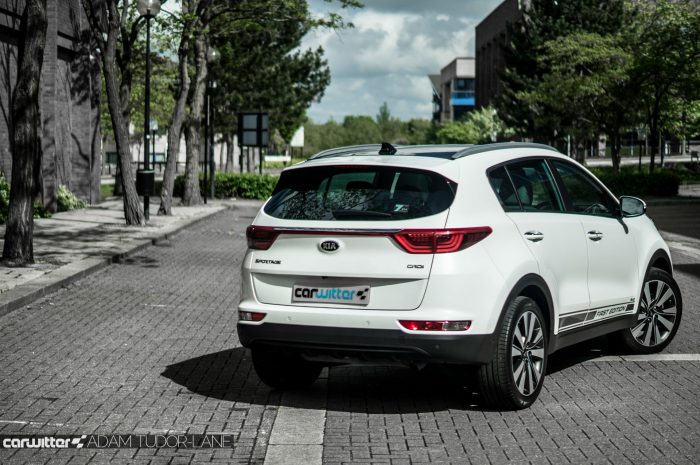 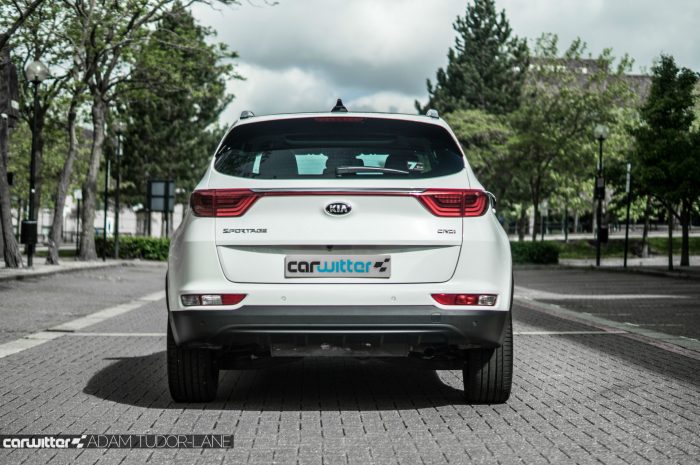 Engine roar is kept to a minimum on the inside, but there is a fair amount of wind noise around the large mirrors when cruising at motorway speeds.

The four-wheel drive system can send up to 40% of power to the rear wheels, but for the majority of the time it will be front wheel drive only until it encounters slip. You also get a nifty front and rear locking diff in case you decide to get the pretty Sportage mucky. 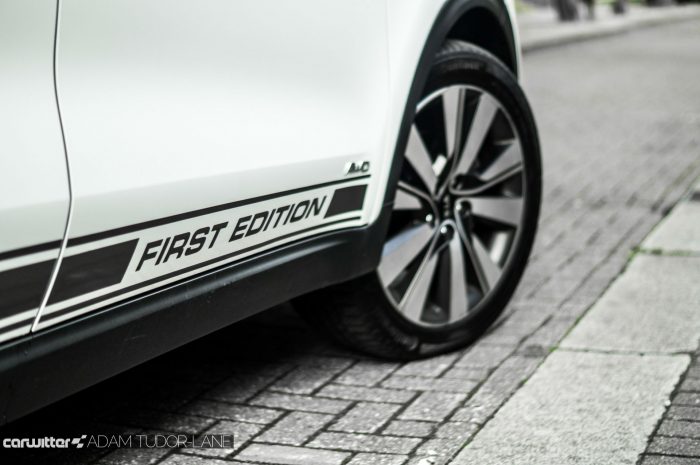 Climbing up into the Sportage and you are greeted by a hue of greys and beige, it looks smart and continues the modernist theme.

A plethora of buttons adorn the dash, stacked and set back in rows it looks a little cluttered when compared to some of the competition. The infotainment screen is nice and large with a responsive nature, it’s just a shame more of the functions haven’t moved into the virtual domain to free up the dash a bit more. 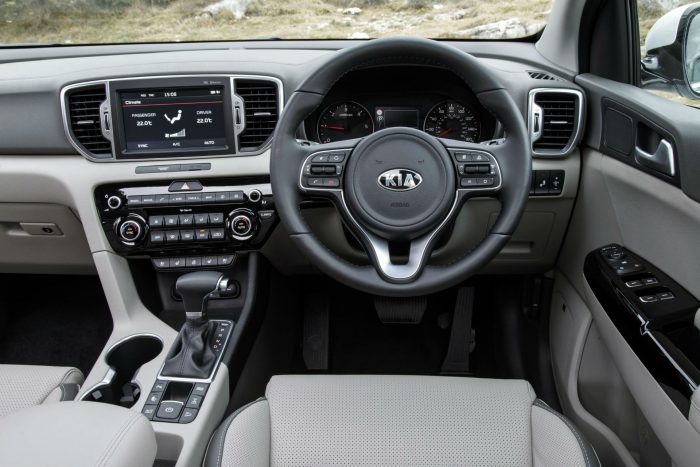 The plastics do leave something to be desired though. In places they are particularly hard and scratchy, even on the surfaces you are most likely to touch. It lets down the rest of the gloss black and the tactile feel to the switchgear, which is a massive shame.

Due to the increased size of the Sportage the interior is spacious with leg room being increased for all. Boot space is equivalent to the Qashqai, and the 60:40 split seats offer a nearly flat load space. 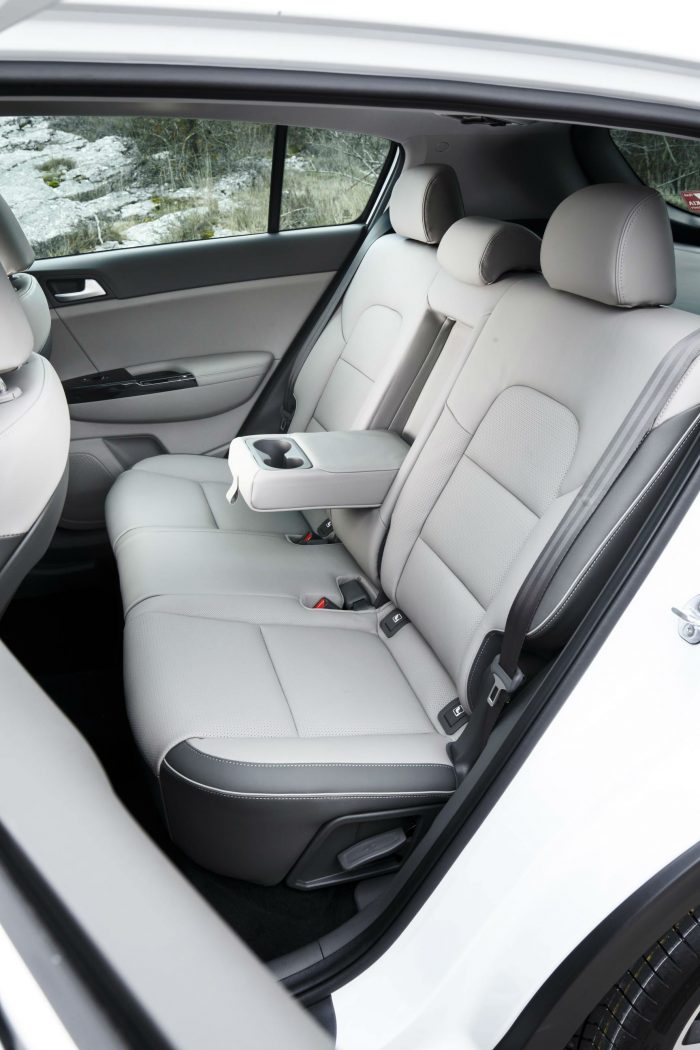 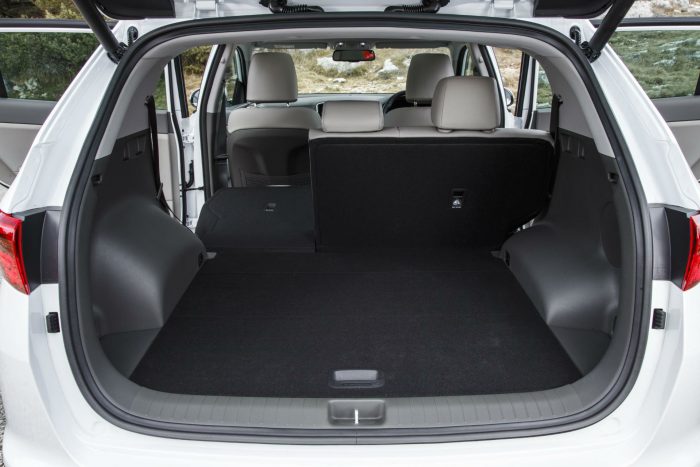 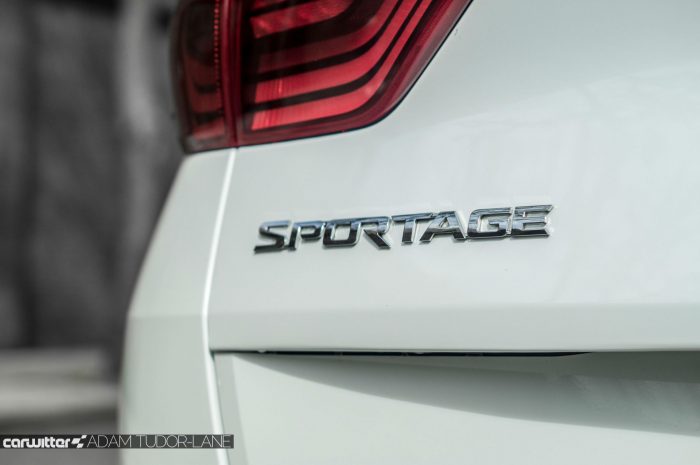 At £31,650 it’s rather pricey, but if you were to spec this engine with all this equipment it does add up to a rather big saving.

If you are looking at lesser priced models it would be best to stick with the beefier 2.0 litre diesel as the 1.7 is a bit agricultural and unrefined. 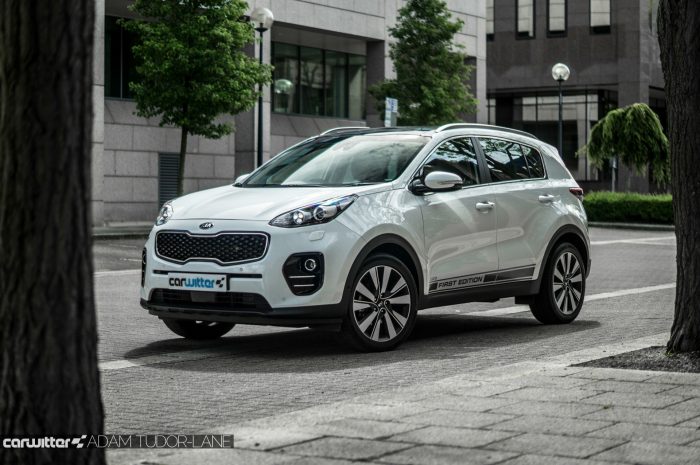 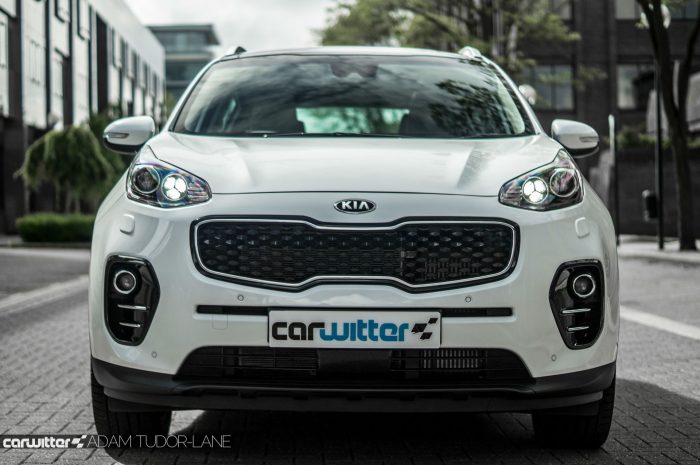 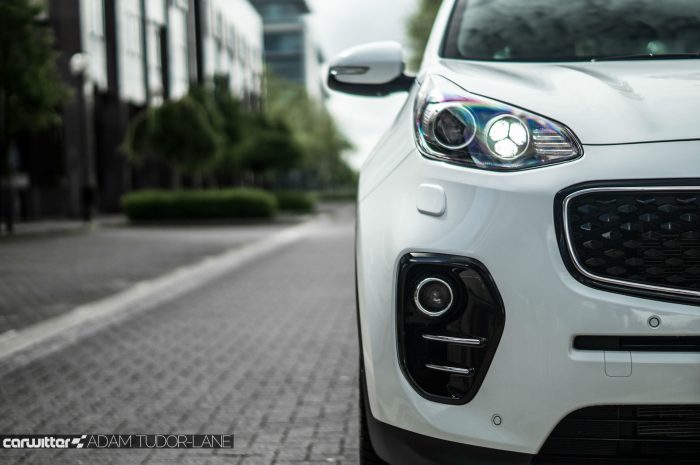 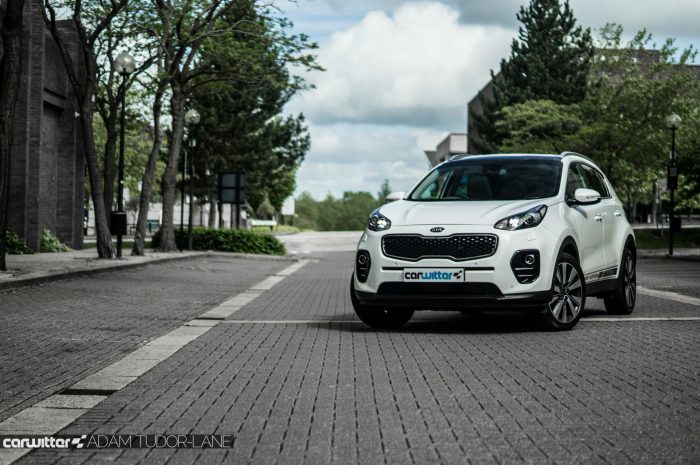 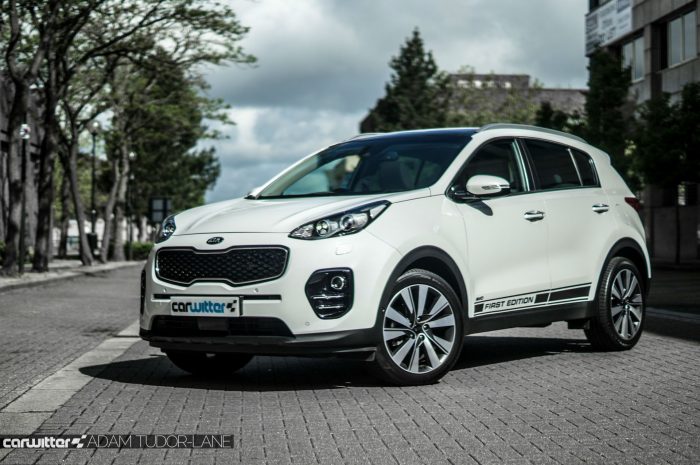 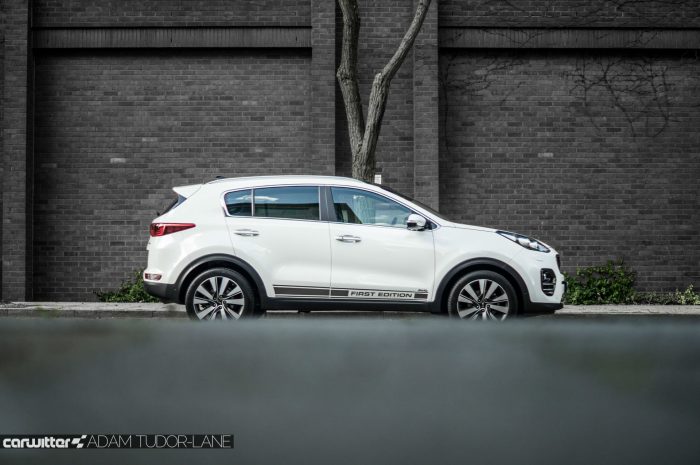 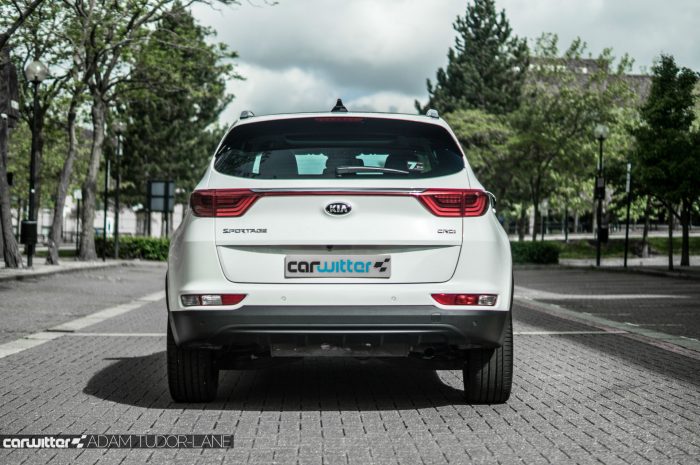