The Cactus Ripcurl is currently the only Citroen to be fitted with Grip Control, so we thought we would take one to the beach to see how it fared. 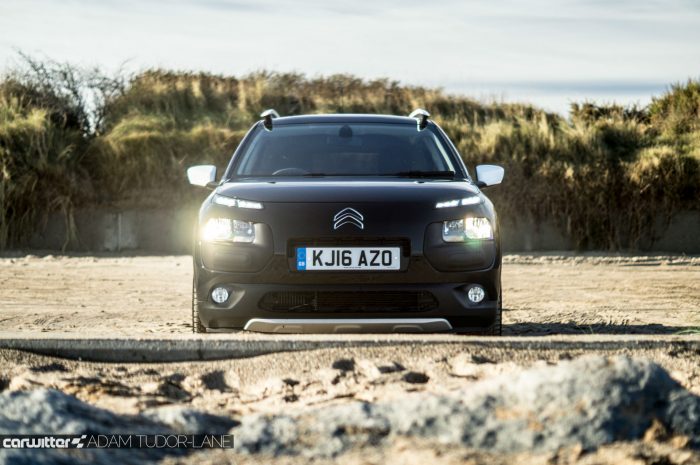 We love the Cactus, always have, always will. Agreed, it’s probably a marmite car but it’s quirky and different. Something Citroen have forgotten how to do over the past 15 years.

This model teams up with the surf brand Ripcurl, adding some discreet side graphics on the front wing and C pillar. Inside also gets some special treatment, but more on that later.

Prices start from £19k. You can opt for 5 different colours and two Airbump combinations, with either a cloth or leather interior.

If the Grip Control doesn’t suit your needs the Cactus can be had from just £169 a month on car leasing sites. 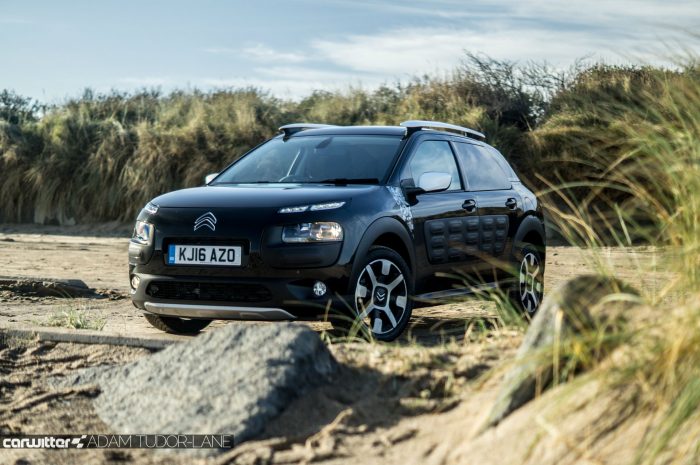 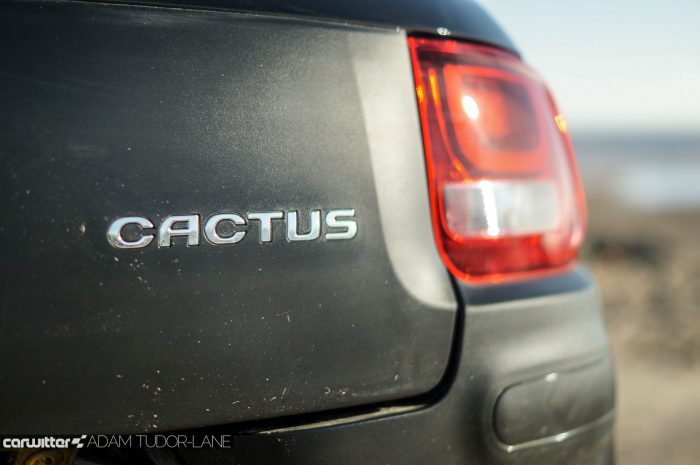 Engine wise the Ripcurl can only be had with the PureTech 110 petrol or the BlueHDi 100 diesel, both manual only. We sampled the 110 petrol, we have driven it before in the 2008 and it’s a cracking little engine.

It may be a raspy three-cylinder turbo, but it packs enough of a punch to get you up to speed quickly. It trundles along happily, always eager to accelerate. In fact, it’s won engine of the year 2016 in the 1-1.4 litre category, it’s that good. 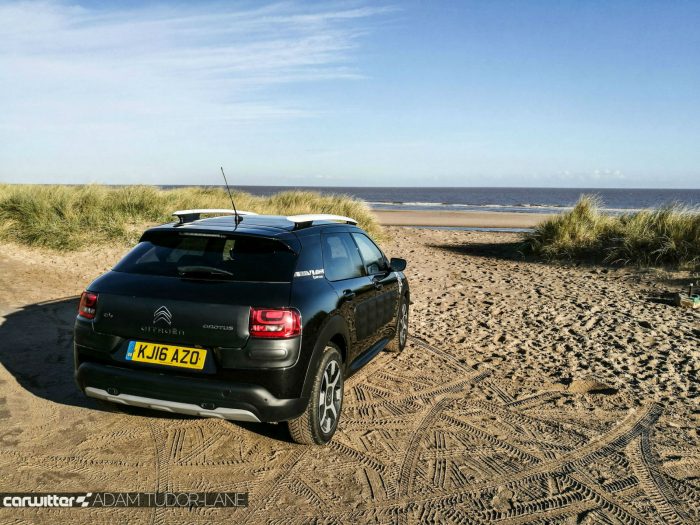 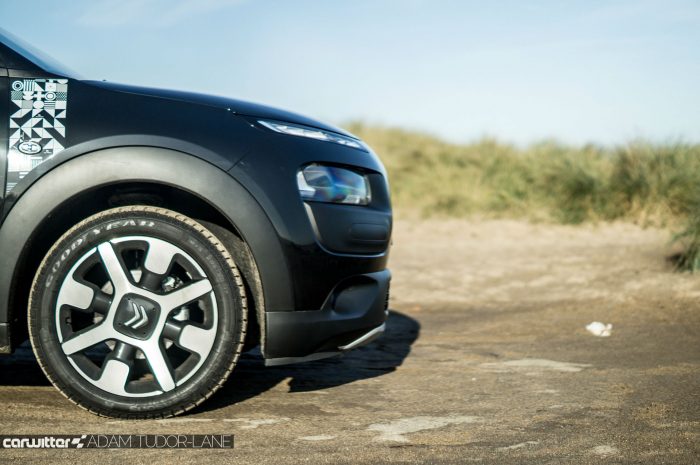 The gearbox can be a little notchy sometimes, hitting the middle ground on occasion until you get used to it. But it’s well geared with a closer ratio further down, but a 6th gear for cruising would be a welcome addition.

Handling wise the Cactus has always felt like a small hatchback, you will get some pitch under acceleration and braking but the body roll is managed fine when pushing on at a pace. It’s a fun and engaging drive, which goes with the cars characteristics. 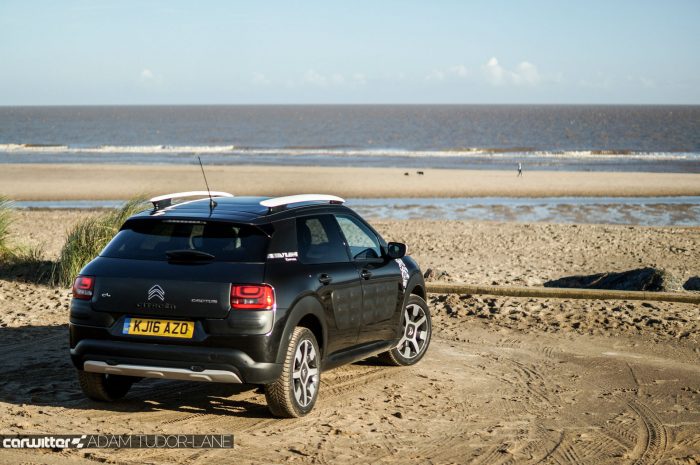 Obviously, we went to the beach with the Ripcurl. Switching the Grip Control to Sand mode we headed into about 30 cm’s of sand covered concrete.

The front wheels scrabbled for grip, pulling left and right where it found traction, but it didn’t get stuck and kept us moving forward.

Not wanting to get stuck and having to call the RNLI we only dipped into the dunes slightly, using them to turn around keeping the rear in the shallows. Even then the all-season tyres got us out no problem. 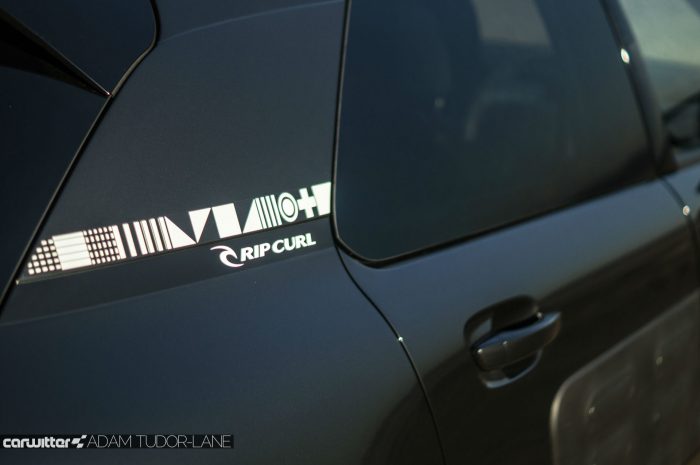 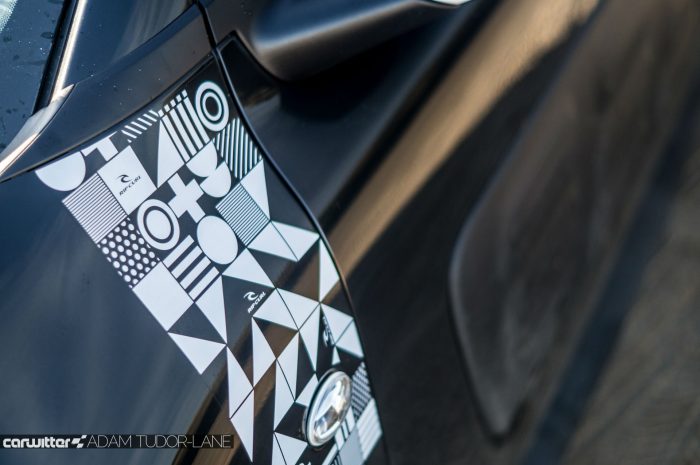 On the inside, there are a few visual tweaks for the Ripcurl edition, orange speaker trim, seat belts and branded matts are nice touches.

The ‘Grip Control’ dial takes pride of place low down in the centre of the dashboard, which actually makes a feature of an otherwise nasty bit of blank trim in the normal manual versions. 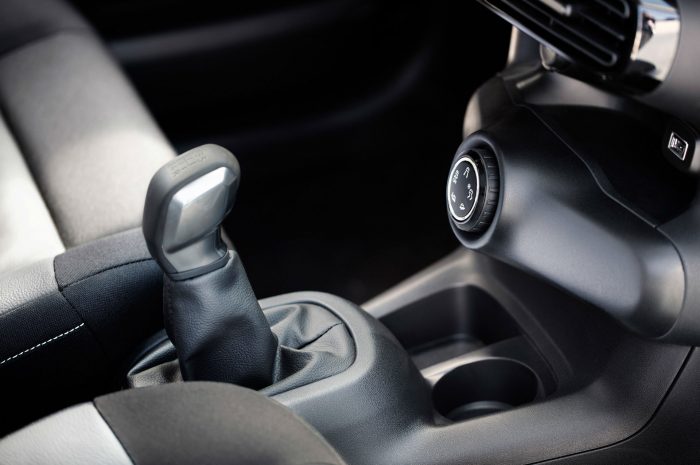 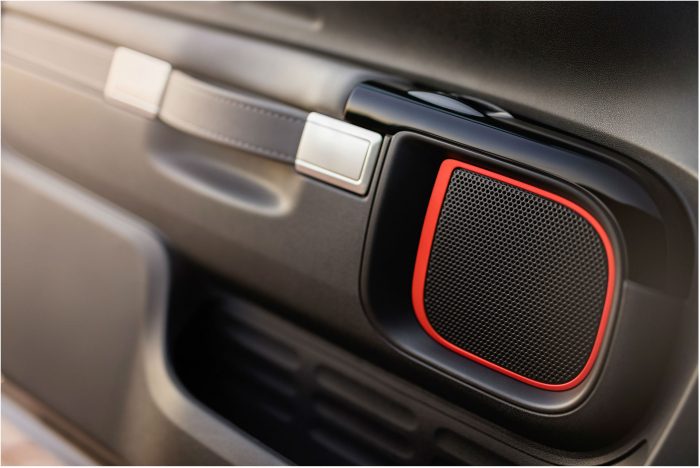 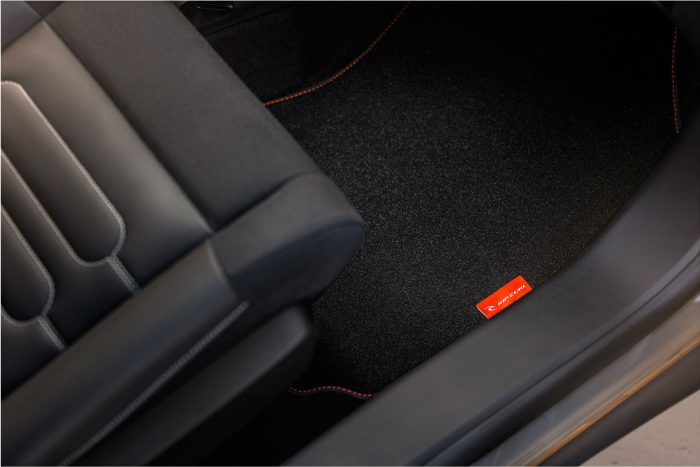 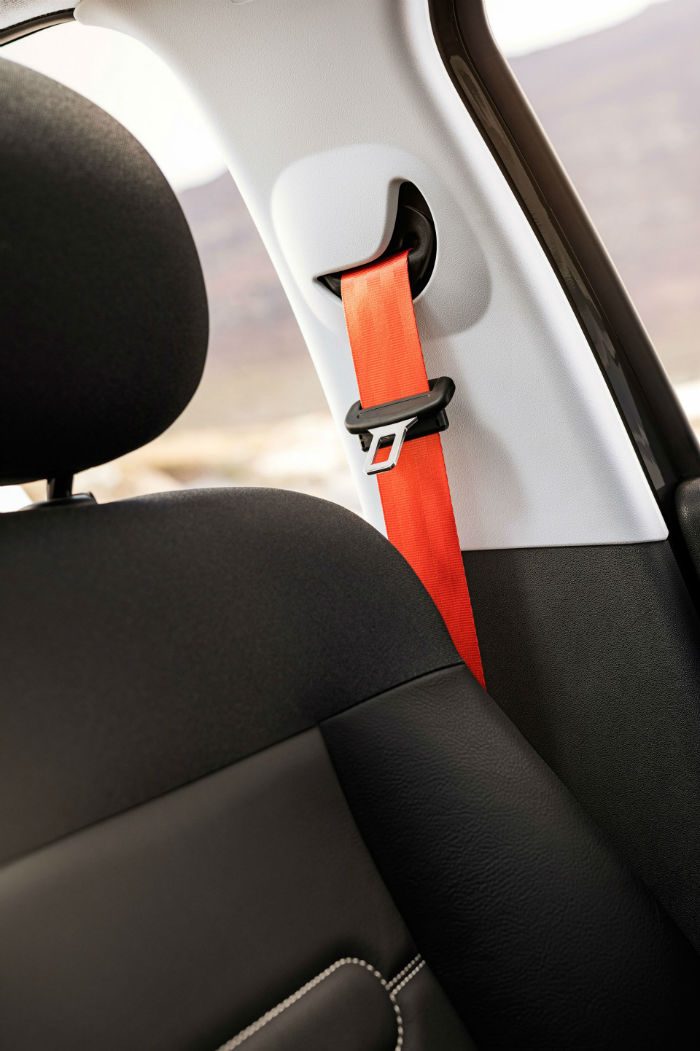 Having spent a decent amount of time with the Cactus, we can safely say that the infotainment is a thorough pain in the behind to use whilst driving. It can even be dangerous at times.

The new Peugeot 3008 gets around this issue by having dedicated hardware buttons that act as shortcuts to the air con, sat nav and the like, there’s no fumbling around taking your eyes off the road for those precious seconds.

Heated seats would have been a nice touch with the half leather interior that was optioned on our test model. 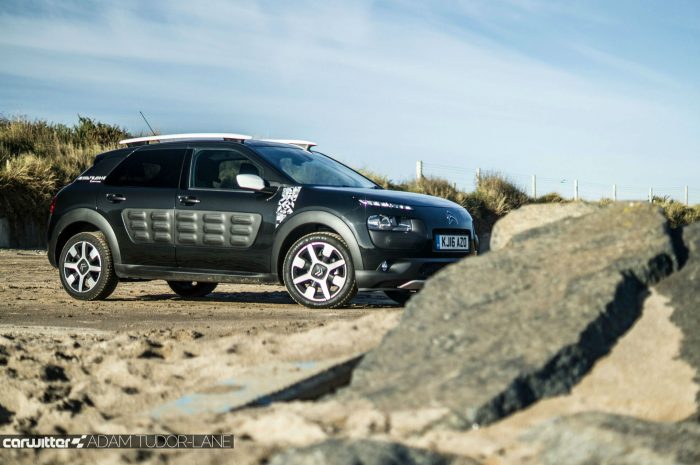 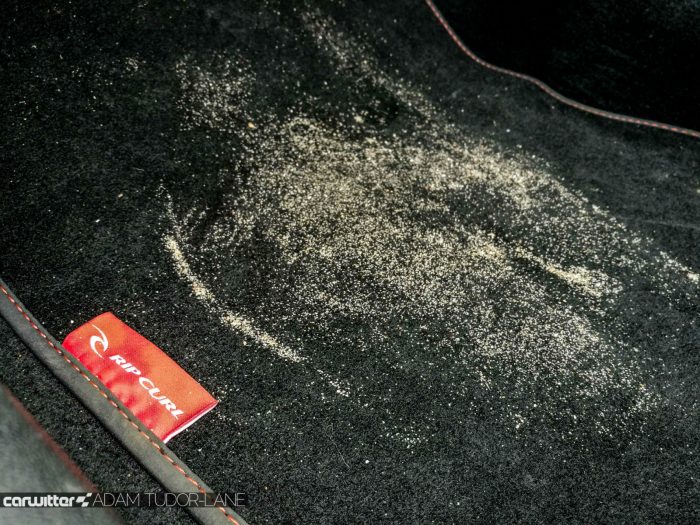 Whilst the Ripcurl model isn’t a limited run, it does add a few subtle differences to the already unique Cactus. The little 1.2 cylinder turbo powerhouse is plenty quick enough, whilst still only emitting 100g/km of CO2.

Grip Control will only appeal to a select few, but if you need that extra piece of mind for the winter, or if you’re a hardcore surfer in Newquay and need some mild ‘sandroading’ abilities it’s right up your street.

It’s well worth comparing the Cactus when you have a choice of personal lease cars available to pick from. 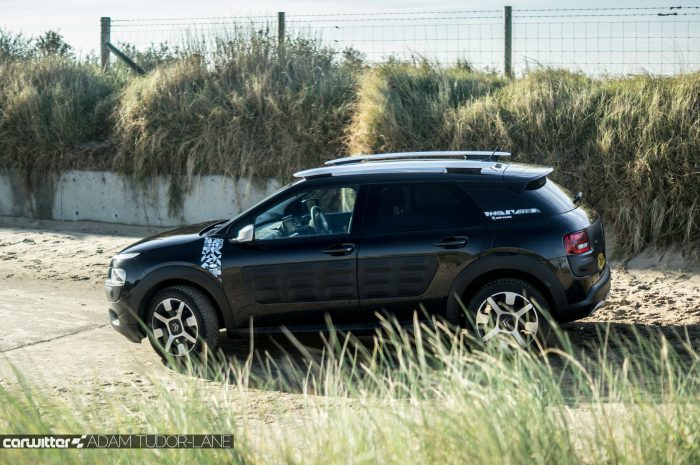 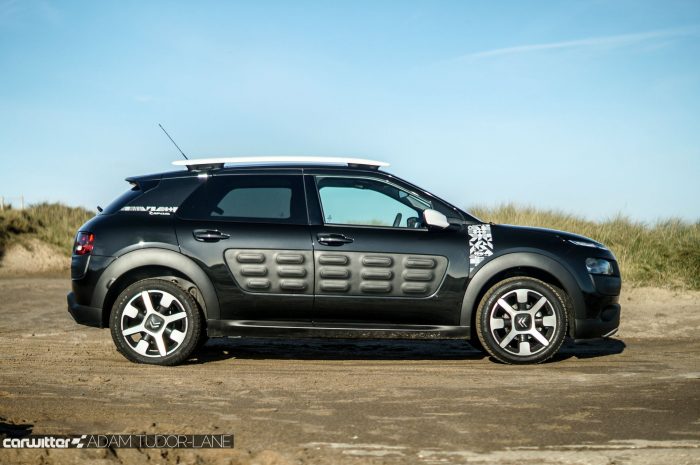 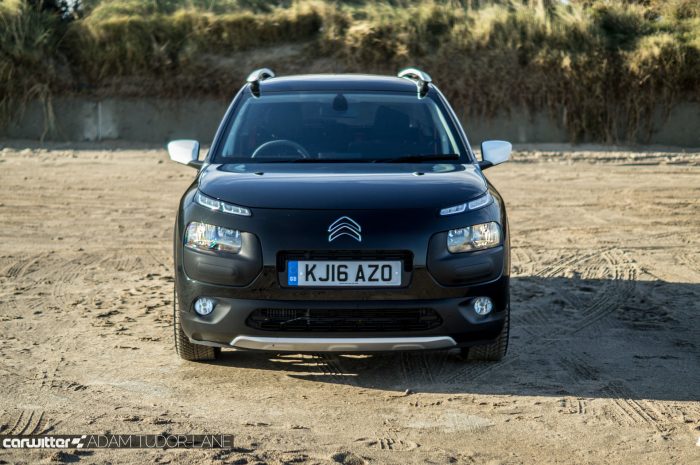 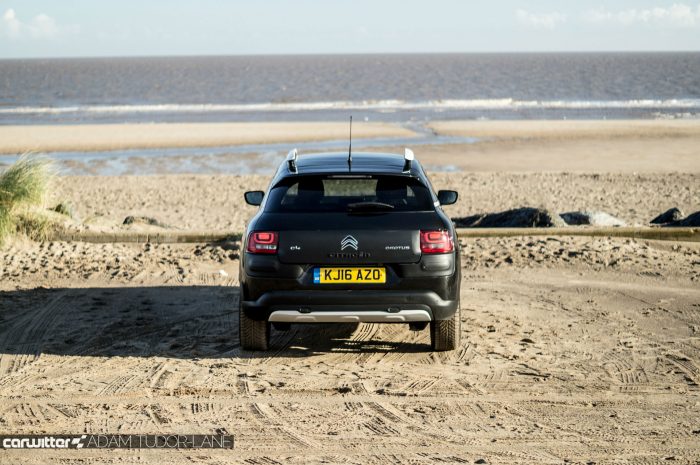