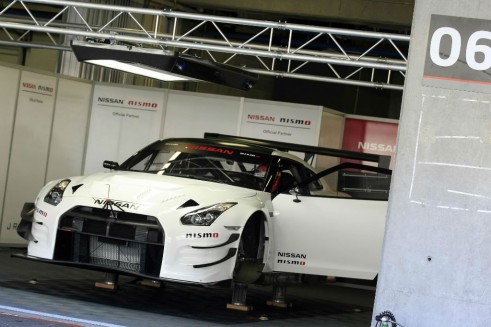 JRM Motorsports (based in Daventry) the constructor of the Nissan GT-R Nismo GT3 race car are inviting drivers and teams to test the car at Paul Ricard raceway on 26th – 29th August.

The test, organised by car constructor JR Motorsports (JRM), will provide substantial seat time in the car that currently tops both driver and teams’ Pro-Am championships in the Blancpain Endurance Series.

The 2013 year model pushes engine output performance to new limits based on a thorough re-setting of camshaft timing, with considerable reinforcement of the moving parts to guarantee durability. Several modifications were made to enhance aerodynamics: canards were added to the front as well as larger louvers to the front fender. The positioning of the rear wing was optimized. These changes increased downforce and enhanced overall aerodynamic efficiency, achieving greater balance between front and rear end forces. The suspension setting was re-worked to accommodate both a greatly refined brake force distribution and the improvements to aerodynamics. Optimization of the gear ratios consolidates the engine output improvements, making the car one of the most competitive in the field.
Nismo is currently preparing an update kit for the 2012 model, NISSAN GT-R NISMO GT3.