One of the advantages of the Los Angeles Auto Show is a 10 minute test drive of the new models available. Honda, Dodge, Fiat, Mazda, Jeep, Lincoln, Scion, and Toyota all had models available to be taken for a spin. I tend to prefer cars with sporting intentions, so I made a bee-line to the Mazda Ride-and-Drive tent.

Mazda wanted me to test drive any of their cars so much, that they had me register, verify my license, take a breathalyzer test, and offered me cookies, coffee, and a one-hour wait.

Fortunately, the Los Angeles weather was in full effect. It was a sunny 77*F day at 11a.m., and fortunately, the previous driver already left the top down from the last drive.

I was excited. I greeted the product specialist and asked him how his morning went. I had very specific questions to gauge his product knowledge. How much does the car weigh? How much horsepower does it have? What kind of MPG can I expect? What comes with the appearance package?

I knew the answers to every single question. I just think it would feel awkward for a nerdy car-guy to have dead silence on a test drive.

We took a quick spin around Staples Center and the Los Angeles Convention Center. 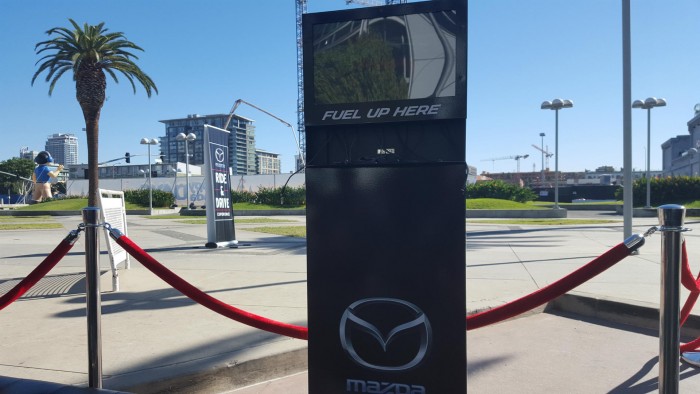 After exiting the driveway, there is a short straight where the product specialist told me to floor it. I did, but only at three-quarter throttle. We were well within city limits and I was well aware of the police presence surrounding the area. It felt quick.

With the automatic transmission, the shift time was fairly quick, with no prolonged delay. I would consider it acceptable for daily driving use, especially for those that choose to spec their car with the automatic. No manual transmission cars were available for the drive.

After a quick right-turn, I instantly noticed the direct steering response and the quick steering ratio. Perfect. I recall talking about my past experiences with an MR2 Spyder, and how I was itching to find a car similar to that, but with more chassis rigidity.

I asked him how much the car weighed. I knew the answer was 2,332 lbs. I also knew that I’d be the most technical person asking the questions that he has had all day. He was flipping through the spec sheet and couldn’t find the answer. He went to Google.

I drove through a bit of an alley, able to gauge bumpy road conditions at low speeds. The Mx-5 handled the rutty L.A. roads with ease. The suspension felt quite taut which surprised me. I was expecting a bit of noise, chatter, or harshness. None of it.

After another right turn, the product specialist wanted to show me how easy it was to pull the top back up, and back down again. We stopped at a light. I was familiar with this because I had done the same with the MR2 Spyder. Unlike the Spyder, there was no binding with the convertible top. It straightened as it was supposed to. It folded away like an accordion, like it was supposed to.

He proceeded to tell me that the car had 155bhp and that I should be able to average around 30 miles per gallon. I joked that it would be more along the lines of 25 miles per gallon with my driving and a manual transmission. He grinned politely. 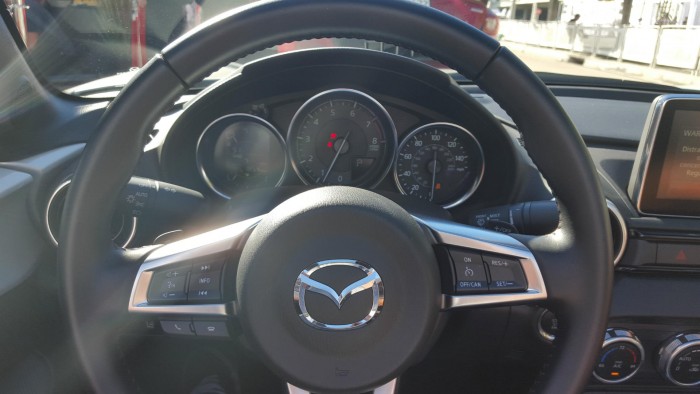 We got a few looks from the public while driving alongside L.A. Live, along Olympic Blvd. before turning right again back to Figueroa St. As we approached another red light, I asked about the appearance package. As a potential buyer, this was important to me.

Once again, he went to his binder of specifications, but after a few flipped pages, talked about the rear spoiler, lower lip spoiler, and side skirts. Nothing else was added, but he did indicate that I may need the Brembo Brake Package to include the Appearance Package.

That was a bit of a deal breaker for me. If I end up choosing the Mx-5 to purchase, I’d likely get the most base model, then upgrade the struts, springs, wheels, tires, and add a great set of brake pads. I’d considering looking to the aftermarket for more of an aero-look with the Mx-5 as well. 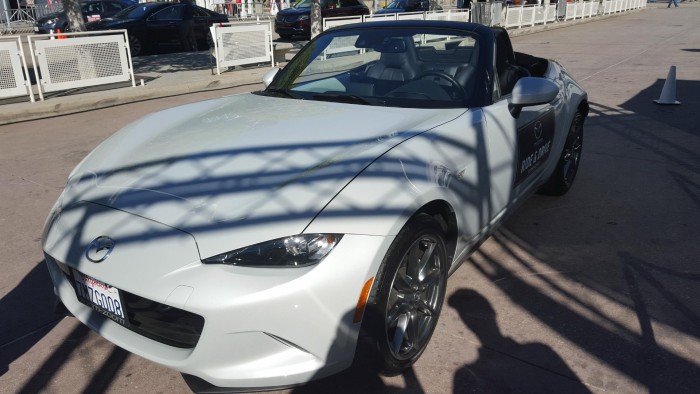 I turned right back onto the drive way, thanking him for the drive.

Overall, it was a quick test drive, but it was enough to get a feel for the car under harsh L.A. conditions. The automatic responded quickly when getting ahead of a few cars. The steering was precise, so much so, that it felt outright intuitive.

The chassis soaked up the roads well. The car felt light on its feet, ready to change directions and get to where you want to be on the road. Some people driving in Los Angeles dealing with the traffic, do that with horsepower. The Mx-5 handled it with quickness, deft change of direction, and did so with surprising road manners.

Simply put, it’s a fantastic car, one that I may consider in my near future.