It could be argued that a VW Golf GTi is all the car you’ll ever need. Decent performance and space for the family, what else do you want in life?

We went to check out the facelift mark 7, to see if it truly is the only car you need in your life.

Starting at £26,680 for a five door with a DSG gearbox, our GTi had a further £4,575 added to it. The bulk of the upgrades consisted of the infotainment, safety pack and the 19inch Santiago alloys. 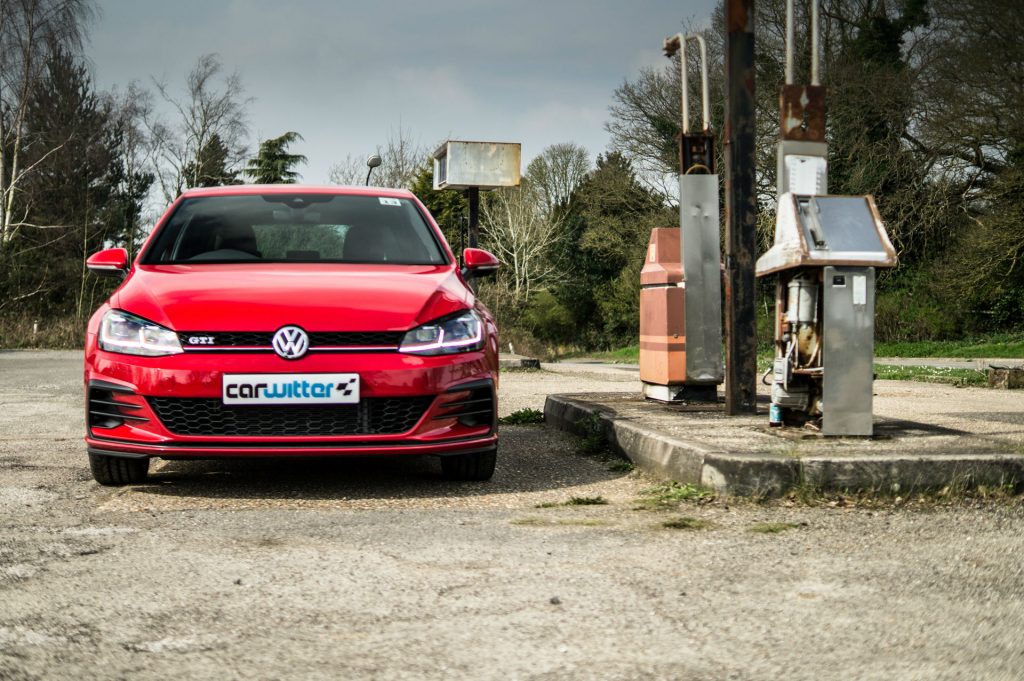 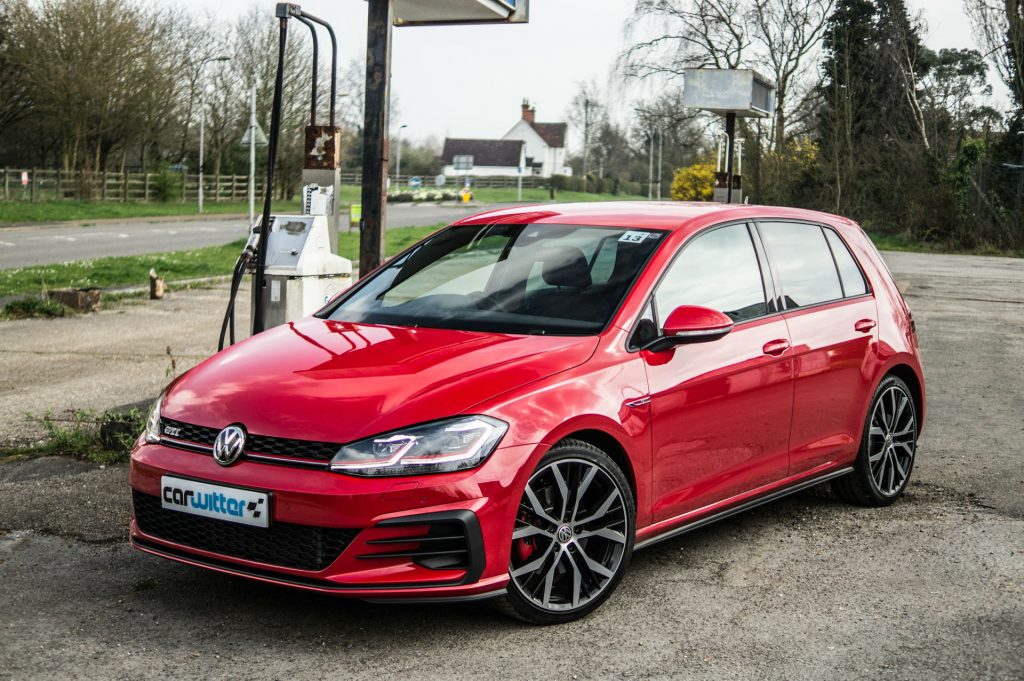 Yup, this is just a facelift. There are a few small changes here and there in terms of styling, LED front and rear lamps are the order of the day, new bumpers and a slightly altered front grille.

Thankfully they’ve got rid of that rather awkward square in the lower grille (which was the collision radar) to behind the VW badge, clever.

There’s another nifty hidden badge feature too – if you opt for the rear camera. Shift into reverse and you hear an electronic noise coming from the back of the car. The VW badge flips out as if you were to open the boot, then beneath that the sneaky little camera uncovers.

Not only does it keep the lens clean, so you’re not reversing into an artist’s impression of the world behind you, but it’s just super cool. Like something Q would concoct for Mr Bond. 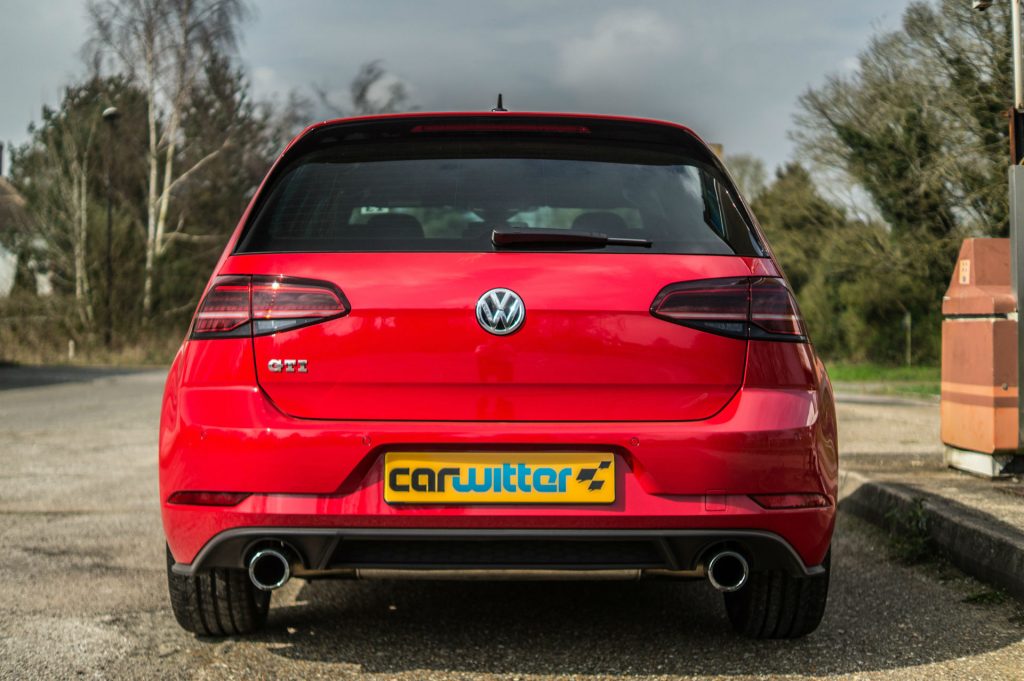 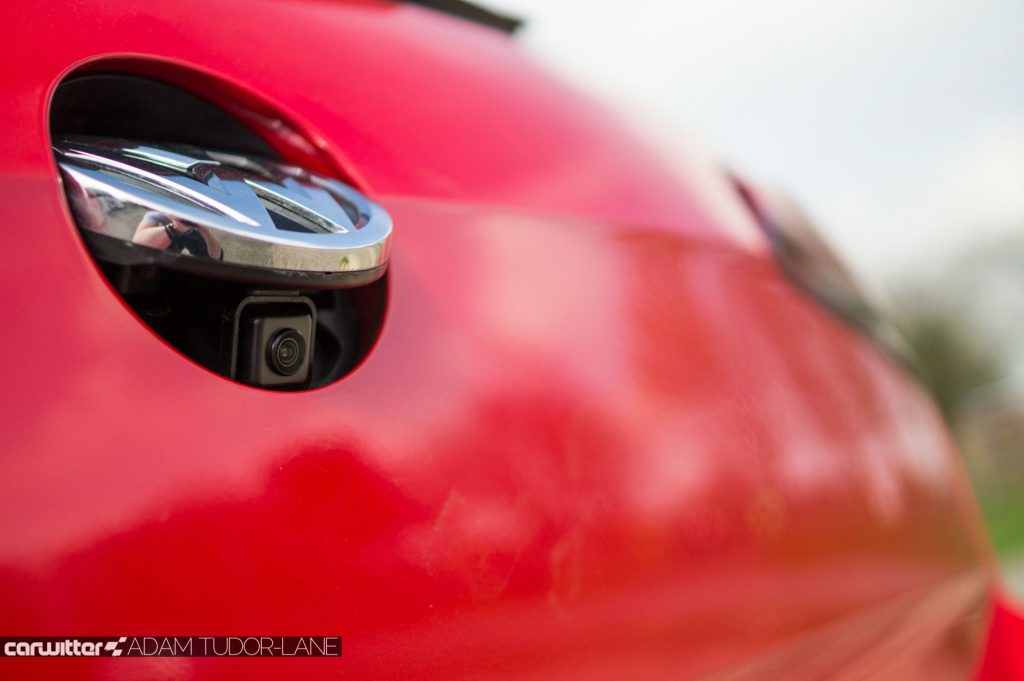 Now, this is why the Golf GTi is a jack of all trades. Keep the DSG in drive, and the car’s selectable mode in normal you’d soon forget any performance is to be had in this hatch. Gear changes happen often, keeping the revs down, there’s no audible exhaust sound and the ride is relaxed – in part due to the active dampers. 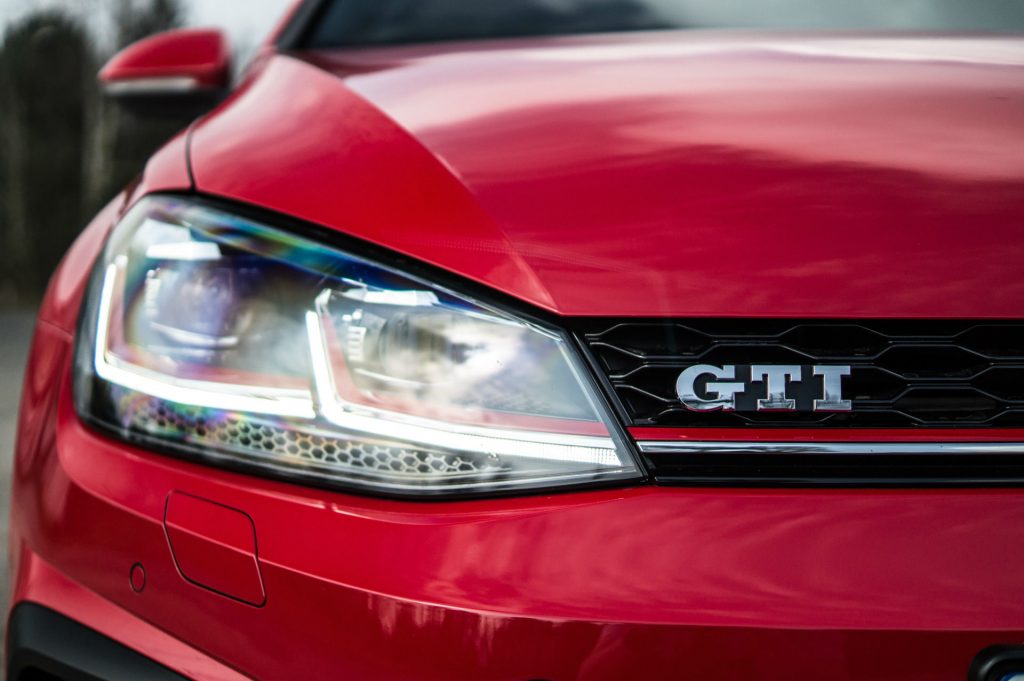 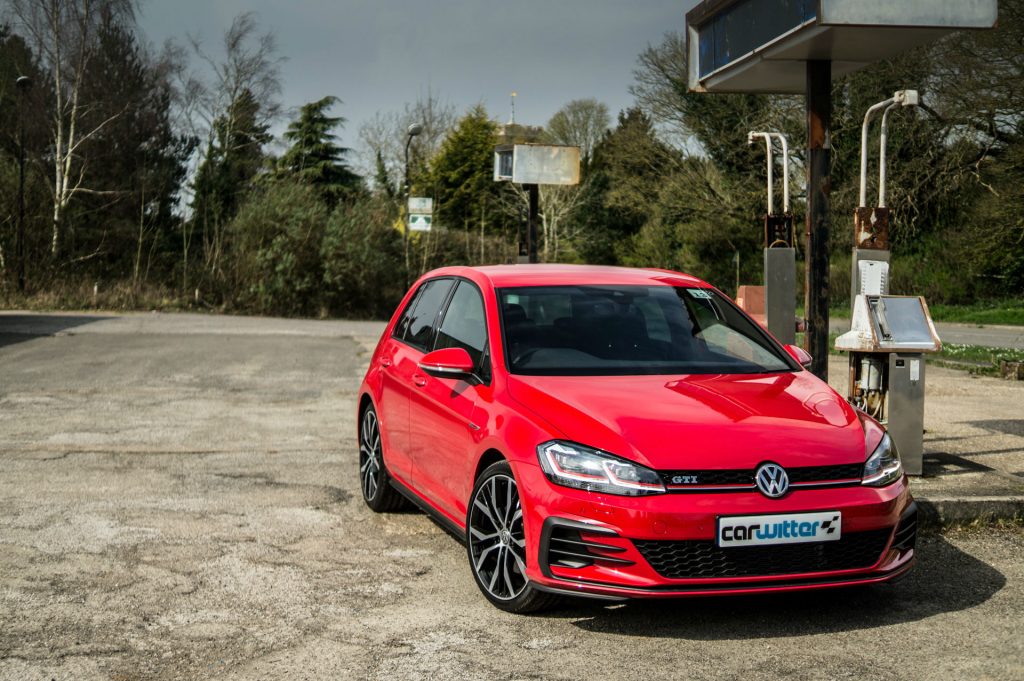 Knock both car and ‘box into ‘Sport’ and its demeanour changes completely. It hangs on to every last rev in that TSI engine. The whole car sharpens up considerably, and switches from a car your granny would be comfortable in to one that wants to attack every apex.

227 BHP is enough. It’s well balanced, driving the Golf R back to back and you realise that the GTi is quick, whereas the R is kill yourself quick.

There’s a subtle difference you see. One, you can have safe fun in. The other, you end up pushing harder and harder, upping the game of chicken between you and the car, until one of you has bigger balls. Or you both die. 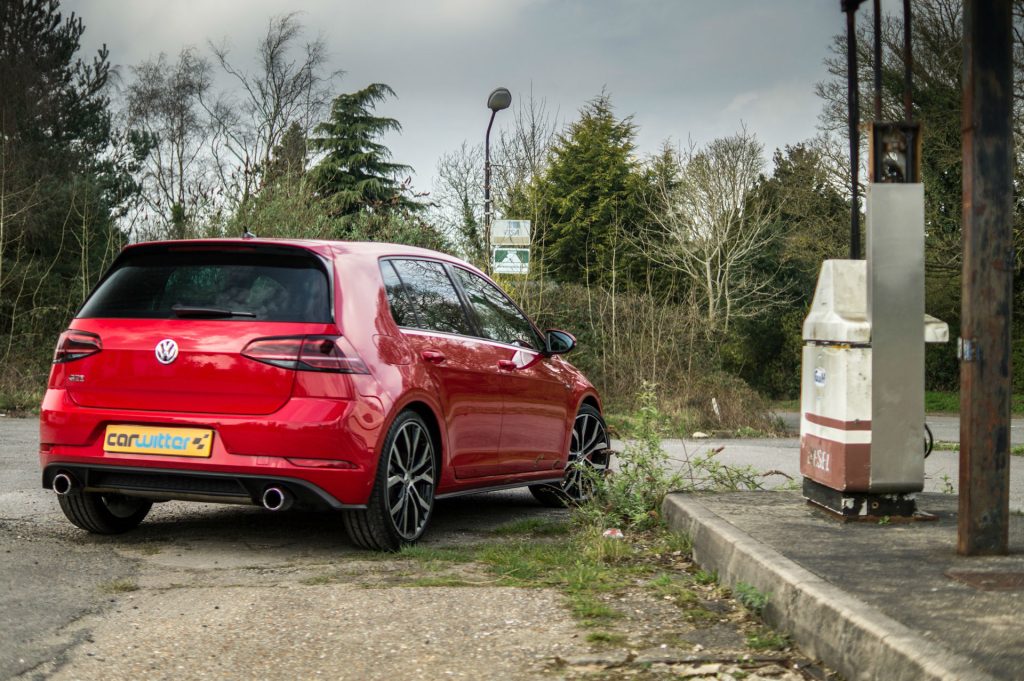 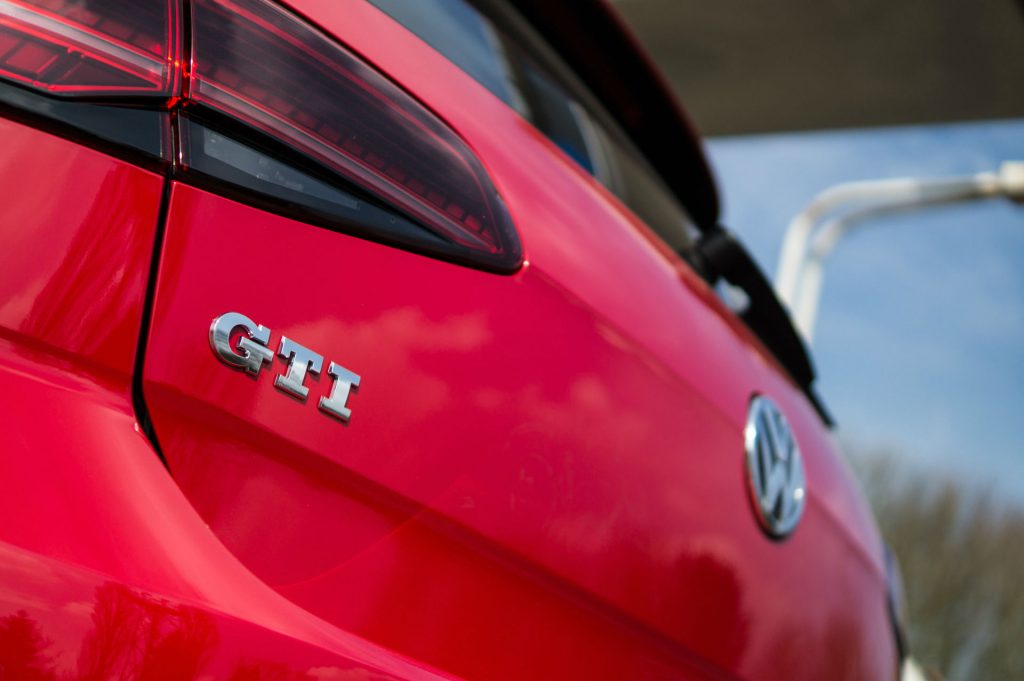 We only got to test out the five door, which weighs 20KG more than the three door model, but the Golf felt a little lardy at times. Occasionally when pushed, or under a swift change in direction you get a bit of weight transfer at the back end. It’s manageable, but reminds you that this isn’t a bantam weight 1,205 KG Peugeot 308 GTi.

Braking is nice and sharp when the bite happens, but a stiffer, more responsive pedal would’ve been nice. The same could be said with regard to the steering too. Dead of centre is pretty vague, direction change isn’t sharp or darty…but it gains lock well and there’s a healthy amount of feedback, which is a surprise in this day and age.

Pushing on out of a slow corner can result in wheel spin, and the traction control light flickering away at you. This would be negated if you opted for the Performance model though, as that includes a mechanical limited slip diff – £995 gets you into the club. 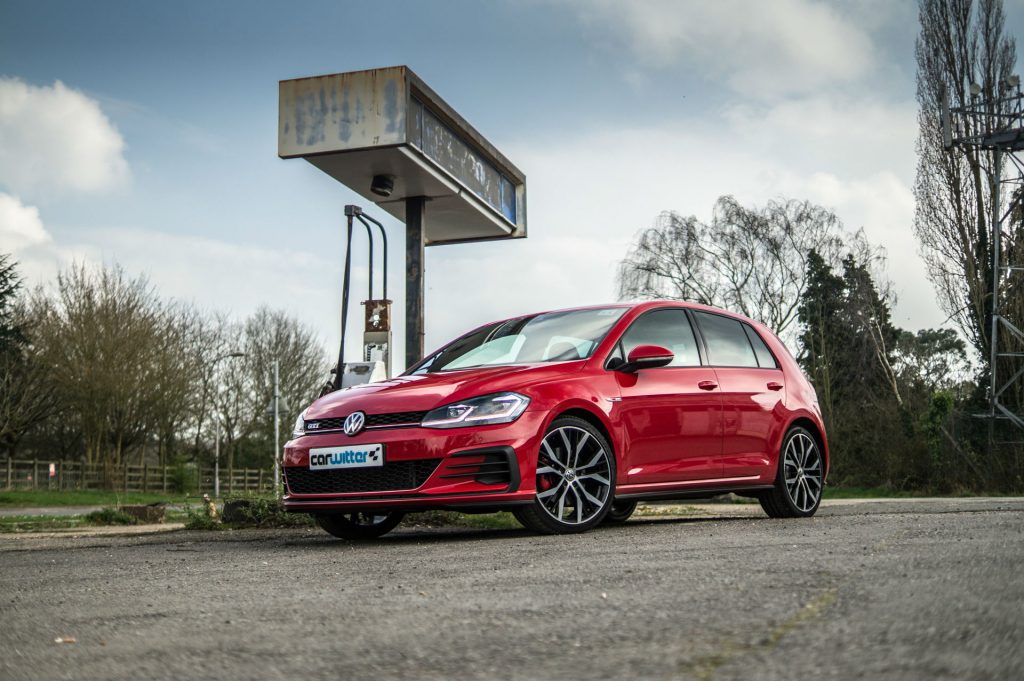 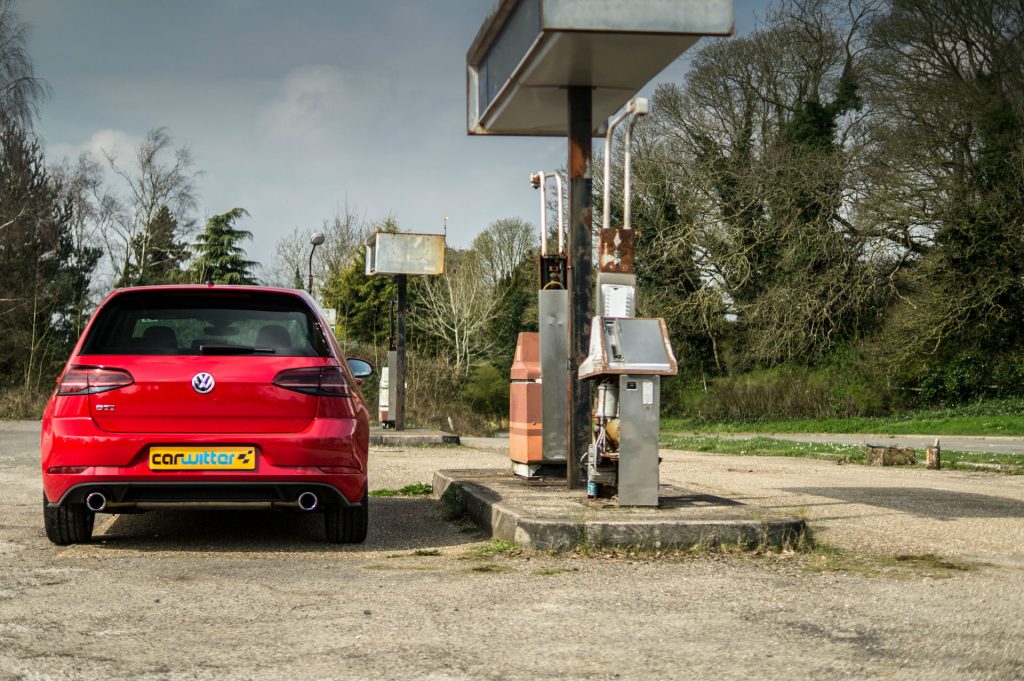 For this model update you can now opt for a larger 9.2” infotainment screen, with the ‘Discover Navigation Pro’ pack – £1,325. Pricey, but it looks so clean and modern. 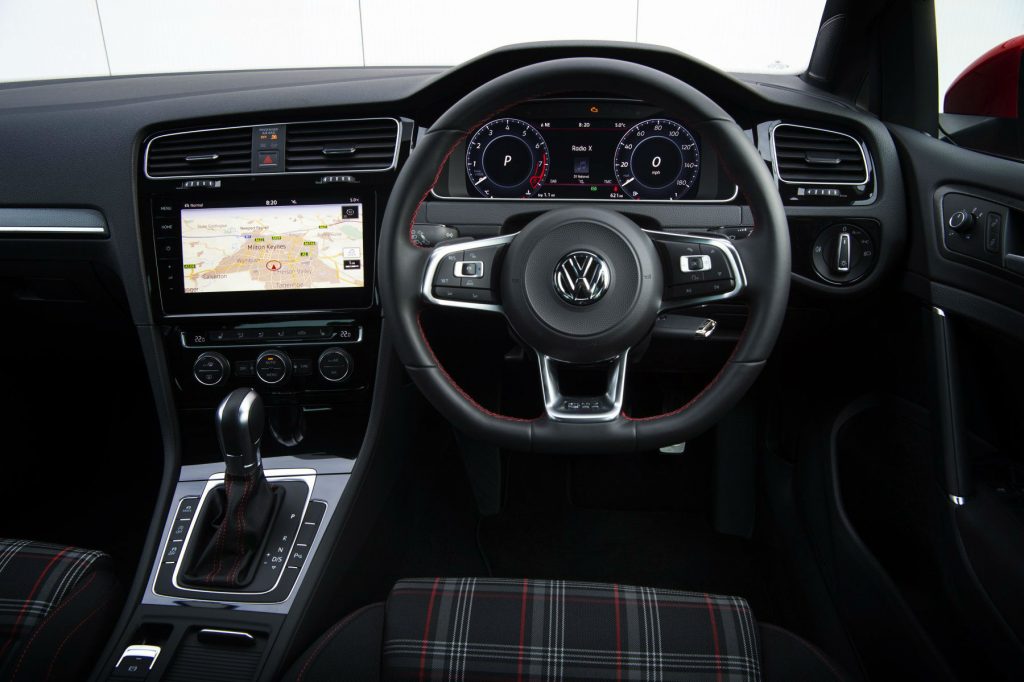 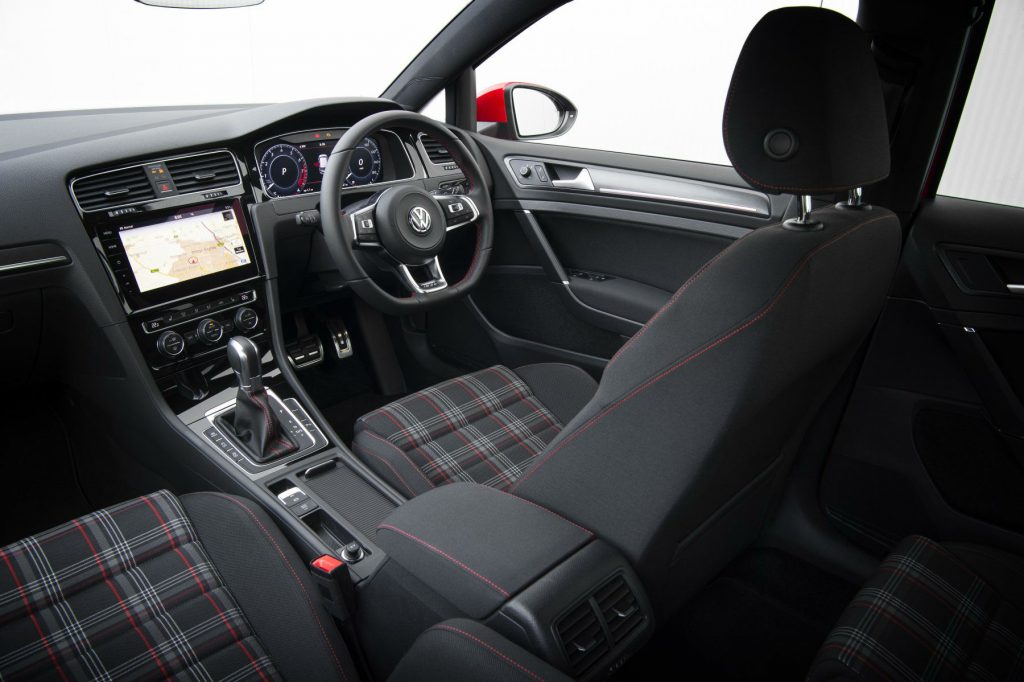 The only omission is a dial for the volume. Instead, VW have gone with a set of touch buttons, it’s a minor grumble, and after all it can be adjusted via the multifunction steering wheel controls.

There’s also a gorgeous LCD screen that serves as the dials, it’s crisp and clear being able to show you all manner of customisable readouts. The whole thing gets a bit nanny state at times though…nagging you if the windows are down that you’re causing ‘Aerodynamic Drag’.
Well yeah, I am, but I like having the windows down?! I’m sure it can be turned off somewhere in the plethora of menus. 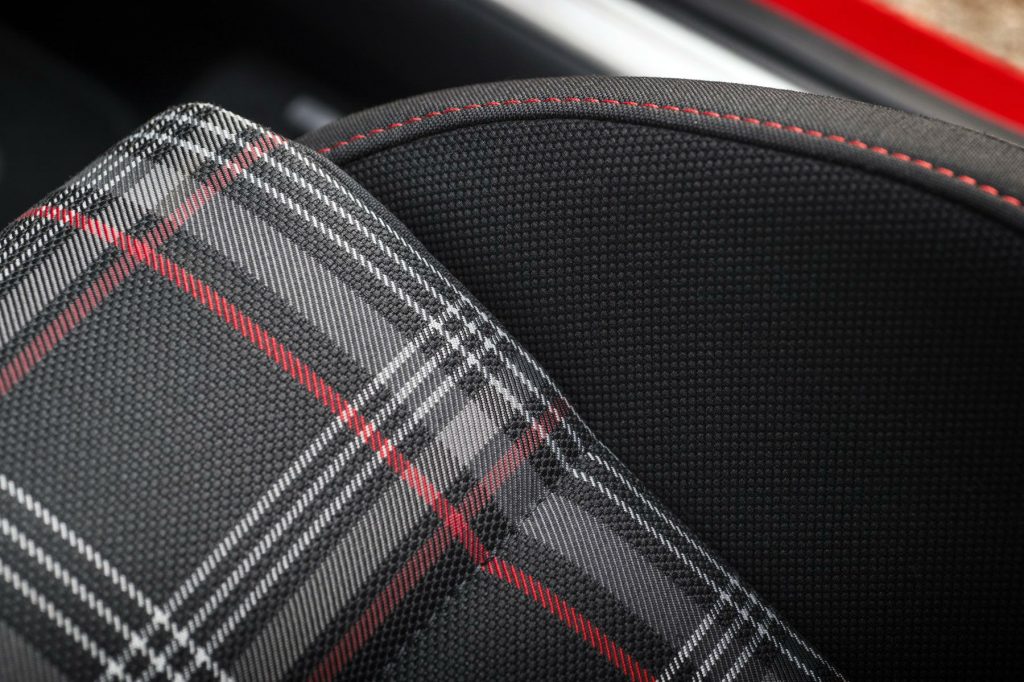 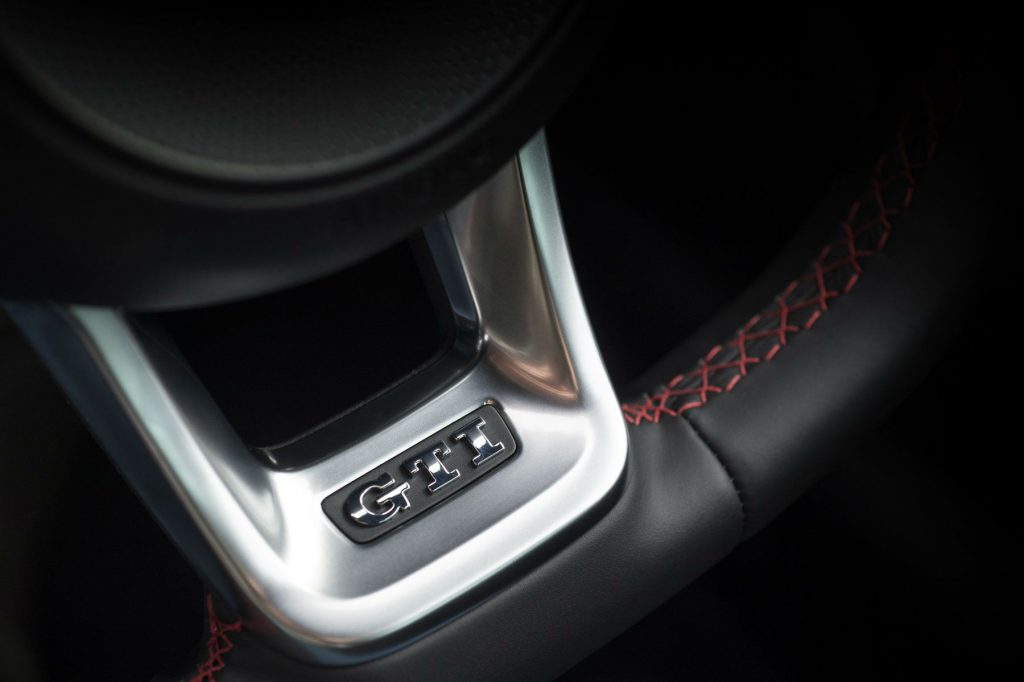 As always, with the GTi you get the lovely tartan seats, both are heated with height and lumbar support – nice touch.

Rear seat legroom in our five door was great, comfy enough for a normal sized adult in both the leg and head department. At the very back boot capacity is a healthy 380 litres normally, which increases to 1,270 with the rear seats down.

Perfect for a ton of shopping or pushchair. 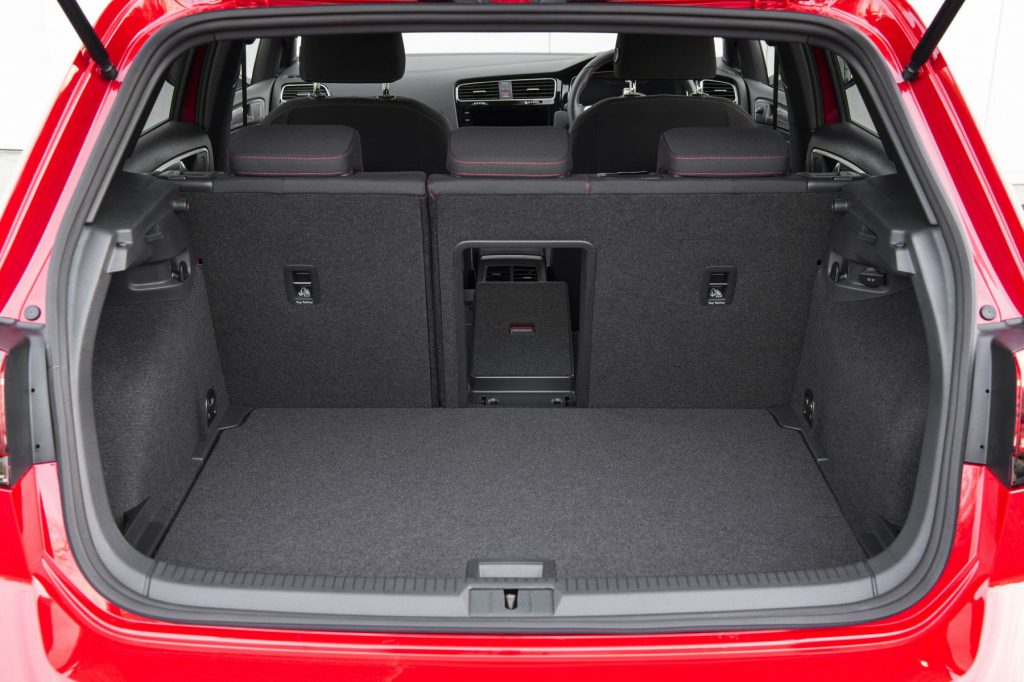 Although the VW Golf may be a ‘white good’ type of car, the GTi makes this humble hatch a Swiss army knife.

It’s a superb town cruiser, but when the moment arises it can change up into a slick B road beater. Whilst not as rapid as the R, it’s certainly quick enough for most. 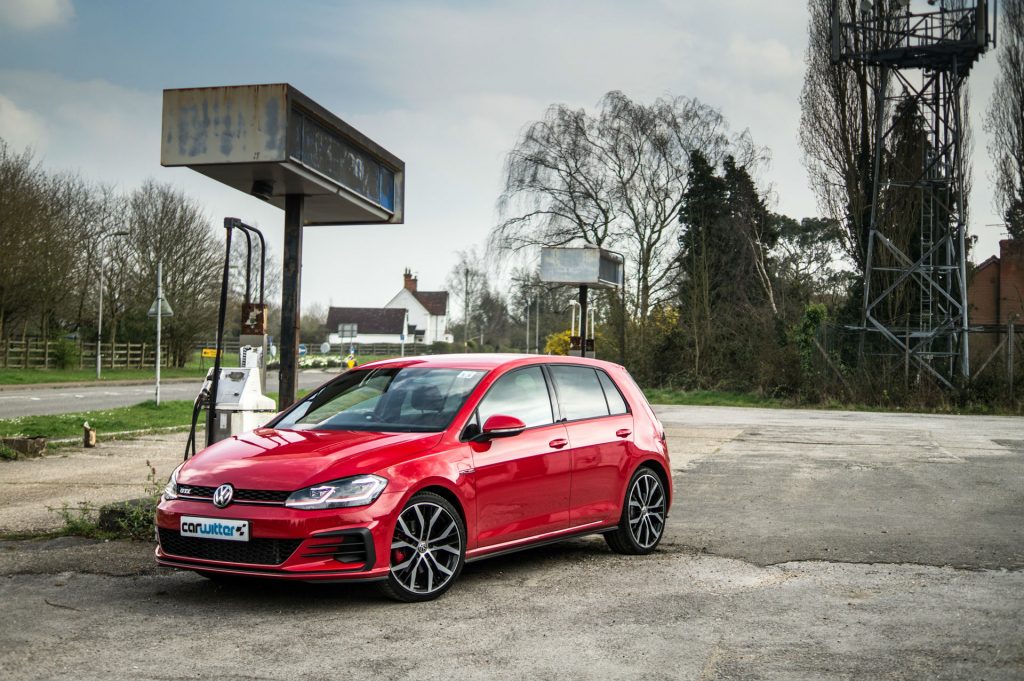