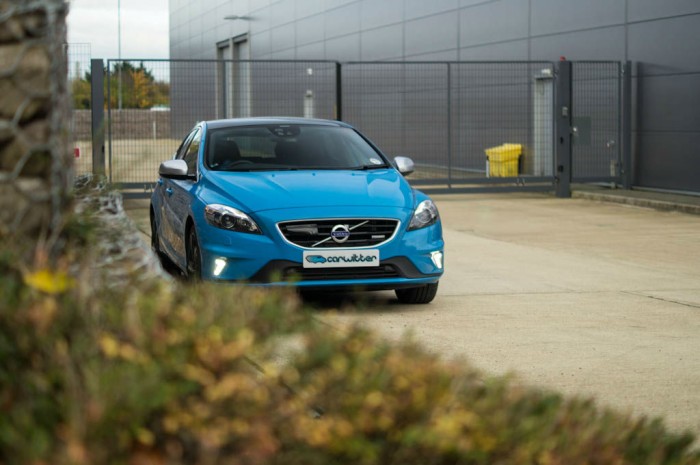 Volvo have always made fast variants of their ultra-safe cars, the T5 badge has forever meant something a little bit special to petrol aficionados. After driving the entry level V40 D2 earlier on in the year we simply had to try it’s more virile bigger brother, the V40 T5.

Our test car had nearly another £7k thrown at it. Optional extras included £1,900 Driver Support Package (Lane change alert, blind spot assist, driver alert control and collision warning), £1,000 for a near full length glass sunroof, £700 on larger 18” alloys, and £850 on Volvos parking assistance. There were a few others too, bringing the grand total to £38,625. 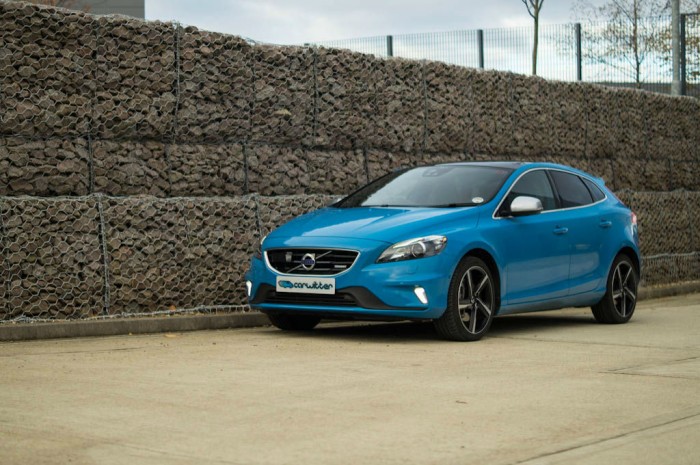 Even with a car costing that much it looks pretty much the same as any other R-Design Volvo out there, the D2 we reviewed also had the R-Design pack on it. It is a shame that Volvo have gone down the route of making all their cars ‘look fast’, it makes these special T5 beasts somewhat ordinary. On the other hand it also makes it the perfect stealth, sleeper car!

I stand by my previous comment on the V40: ‘Without doubt this has to be the best looking Volvo made in the last 10 years’. The larger 18 inch alloys fill the arches a little more, and the black glass sunroof makes the Swede look even meaner. 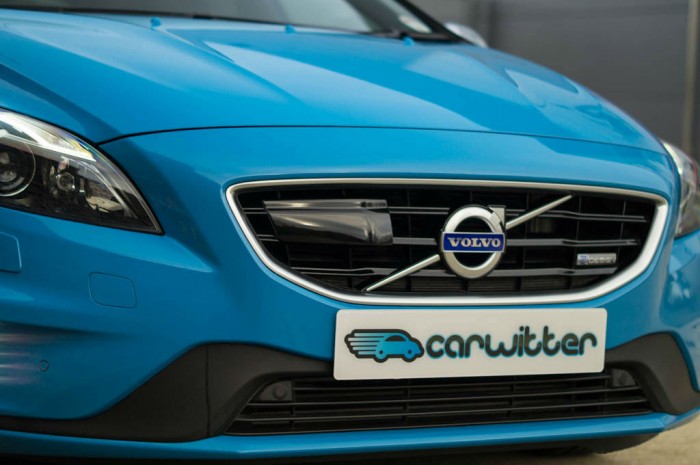 My only little moan is the rather large gloss black growth in its front grille. This houses all of Volvos technical radar wizardry. It is a little bit unsightly…and I know that Ford have recently managed to integrate a similar system behind the front bumper, here’s hoping Volvo follow suit in the future. 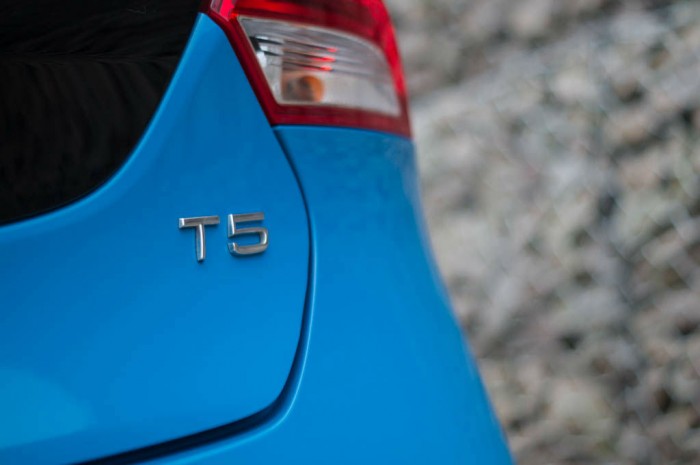 This thing is fast! Once you are behind the wheel you soon realise what a brute that 2.5 litre 5 cylinder engine is. Accelerating at any speed you are greeted with effortless torque and pace. It pulls like a train under hard acceleration, the gearbox doing a great job to keep the power delivery linear.

Point it into a corner at speed and you come out the other side thinking ‘That’s not possible’. The way it grips and turns in is just superb, the level of grip seems unending. We never actually got to find this limit in the dry! In damp conditions under feisty acceleration you do get the front understeering, but lift off and the T5 soon pulls back to the right line. 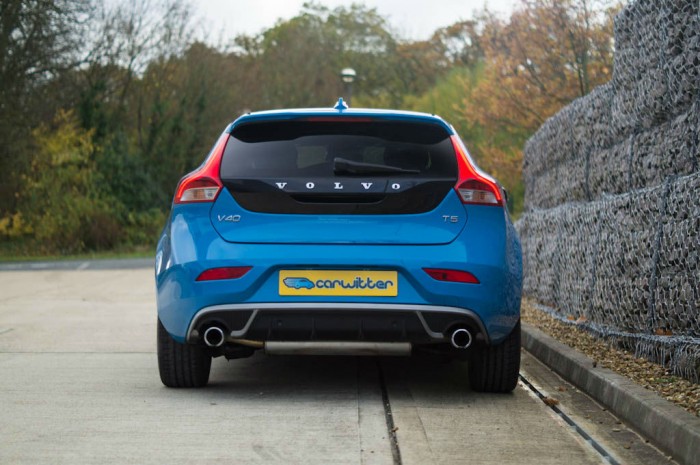 Even though the car is rather stiffly sprung it’s not uncomfortable, on motorways and dual carriageways it will pick up small undulations more than most, but it’s never tiresome.
Through corners you do get some lean, but as soon as you are heading straight the V40 settles back down, no drama, no fuss, no rolling.

Now there is one slight annoyance. The T5 only comes with a 6 speed auto ‘box, no paddles. It takes away some of the involvement that paddles would bring. I’m not one to cry for manual gearboxes in everything, and this is no different…I just can’t help but feel a semi auto mode with paddle shifters behind the wheel would make a huge difference from a drivers point of view. Polestar have recently announced a paddle system on its V60 and S60 models, so it’s not beyond the realms of possibility. 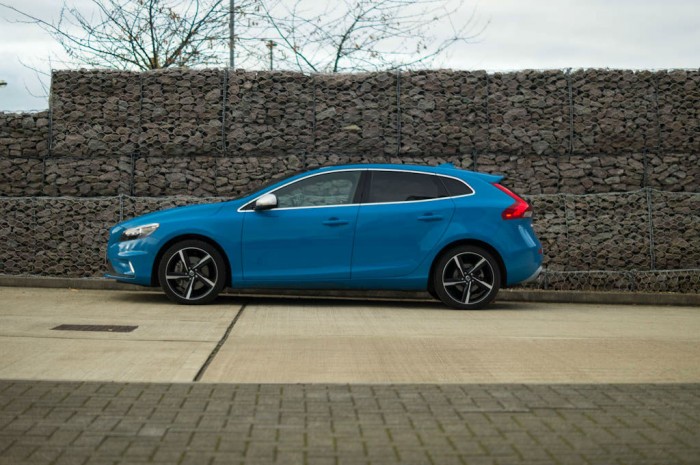 You do have the option of changing gear manually with an up and down flick of the stick, but it’s just not the same!

When in normal ‘D’ mode the Volvo holds on to gears a little bit longer, and shifts up quicker (no doubt trying to wring out every last bit of MPG from that thirsty engine) but put your foot to the floor and you wait around a second or so for the gearbox to respond. It gets better in ‘S’ Sport mode, mainly because its only 1 gear away from the one it needs to be, but it’s a little on the slow side for my liking. 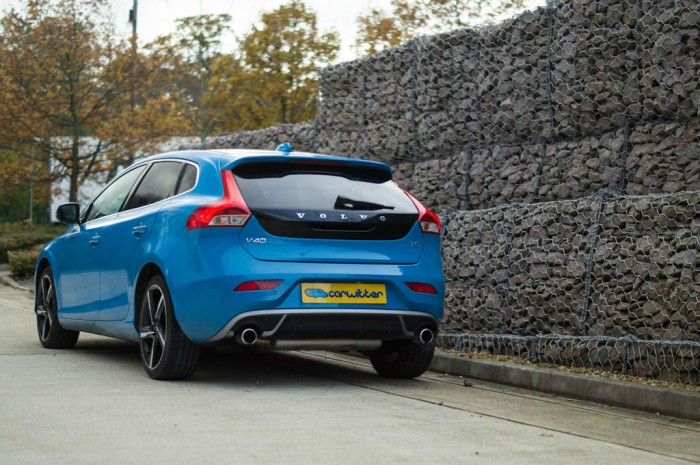 Two features we have to mention are the radar guided cruise control, and the lane keeping aid. You can set the gap between you and the car in front, and the V40 will keep at that same speed and pace. In start stop traffic it even accelerates and brakes to keep you moving – it makes driving in a traffic jam a breeze!

As for the lane keeping aid, instead of just vibrating the steering wheel, or showing you a light the Volvo actually turns the wheel to push you back toward the middle of the road – very mysterons!

It also has a rather rorty exhaust note. At start up and at low speed it lets out a low end growl, as speed increases this dies off. Personally i’d love it to have a Group B – rally spec – crackle and popper on this model.

Inside the V40 is a leather clad affair, when opting for a T5 you are instantly aligned with the ‘R-Design Lux Nav’ equipment level. This is top of the range, you obviously get Sat Nav, leather everything, and smatterings of smart R-Design aluminium trim. 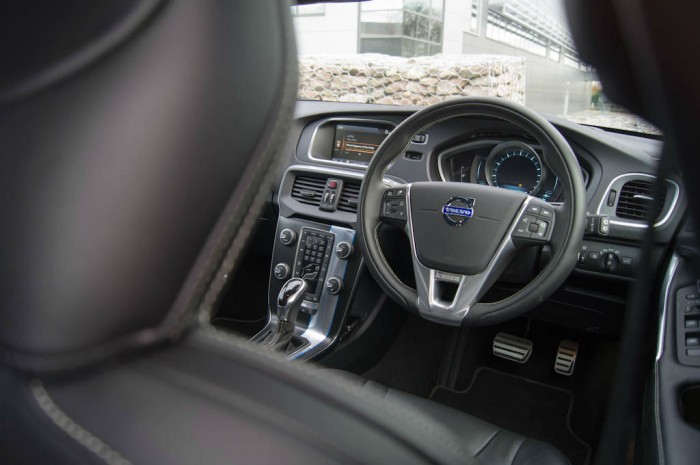 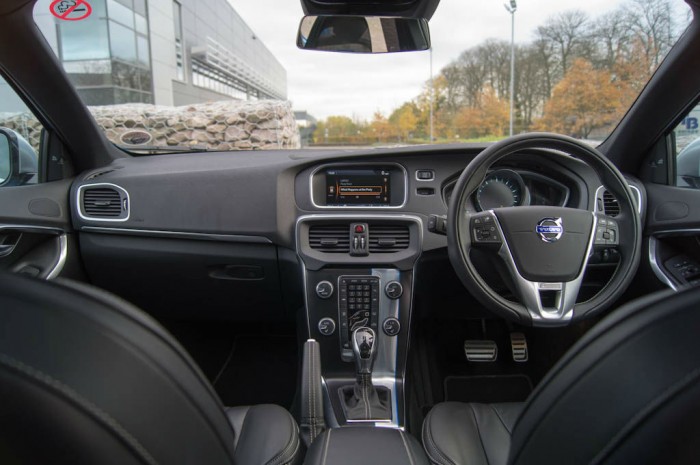 It’s a very nice, cosy place to be. With all the driver alert systems active you get a feeling of security I can only image tank drivers receive. 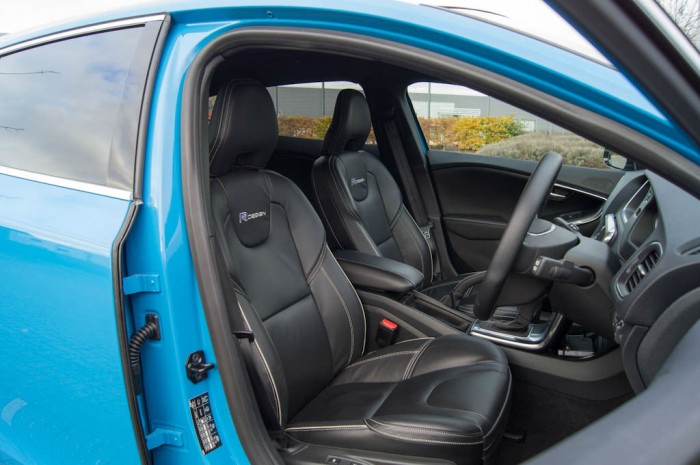 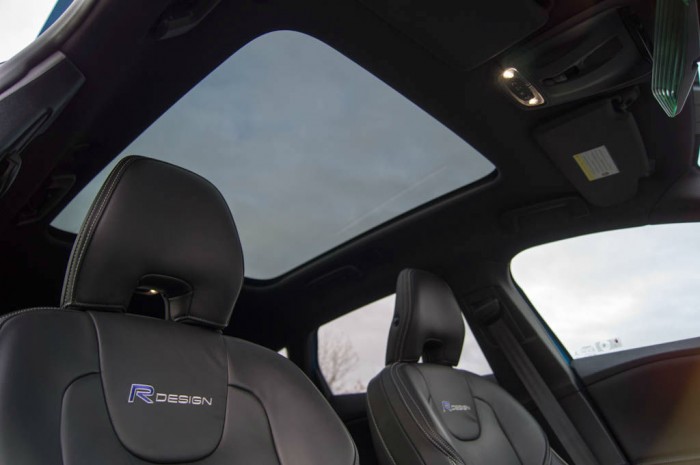 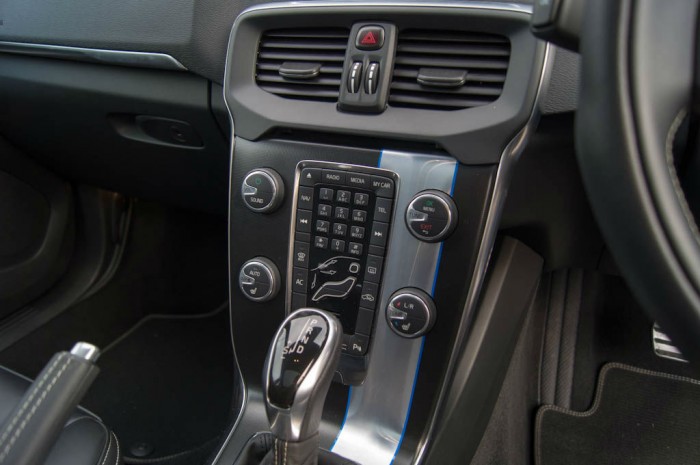 Rear seat access is ok, legroom is slightly pinched but comfortable enough. Boot wise you get 335 litres, part of the lower section is taken up by the ‘Tempa’ space saver spare wheel. An optional extra at £150. 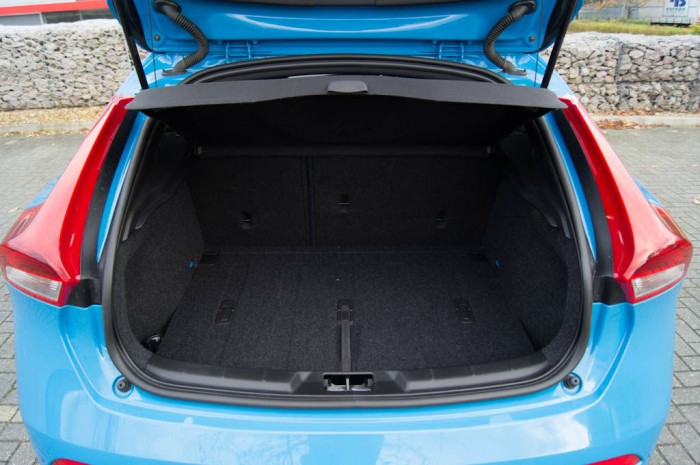 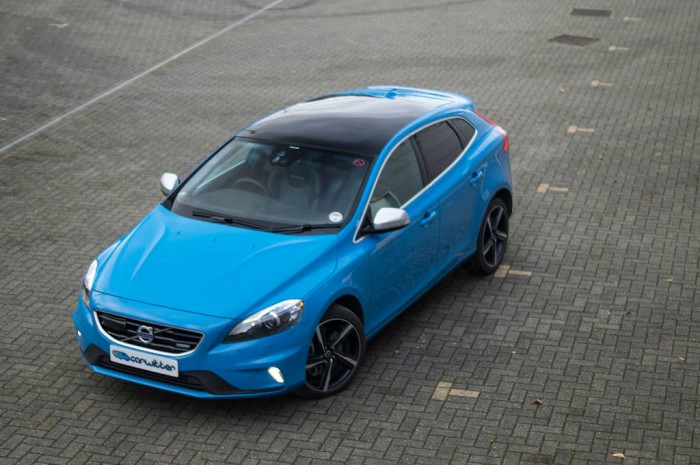 At nearly £32k this is a pricey car, it’s quicker than the Focus ST and Renaultsport Megane but it’s not really a clear alternative.

You know those two cars are special, they look different, beefier and faster than their run of the mill commuter brethren. The V40 T5 looks like 80% of the V40’s on the road. It’s a superb car, but it has some marketing position issues, it’s not at all clear cut and defined.

I would buy one though…it’s different, very quick, under the radar and the V40 is still relatively uncommon on the roads. 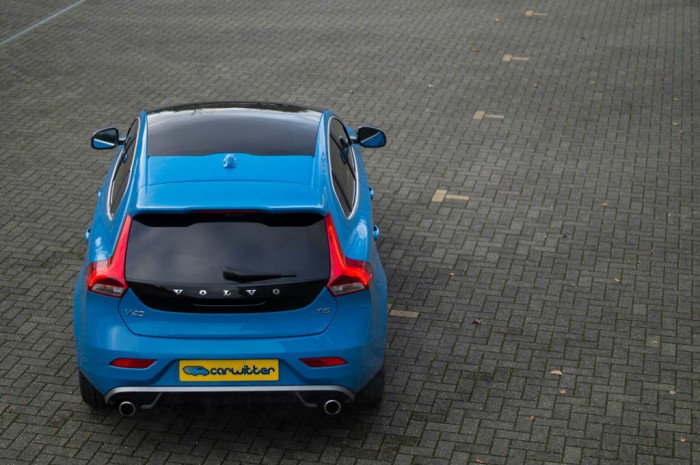