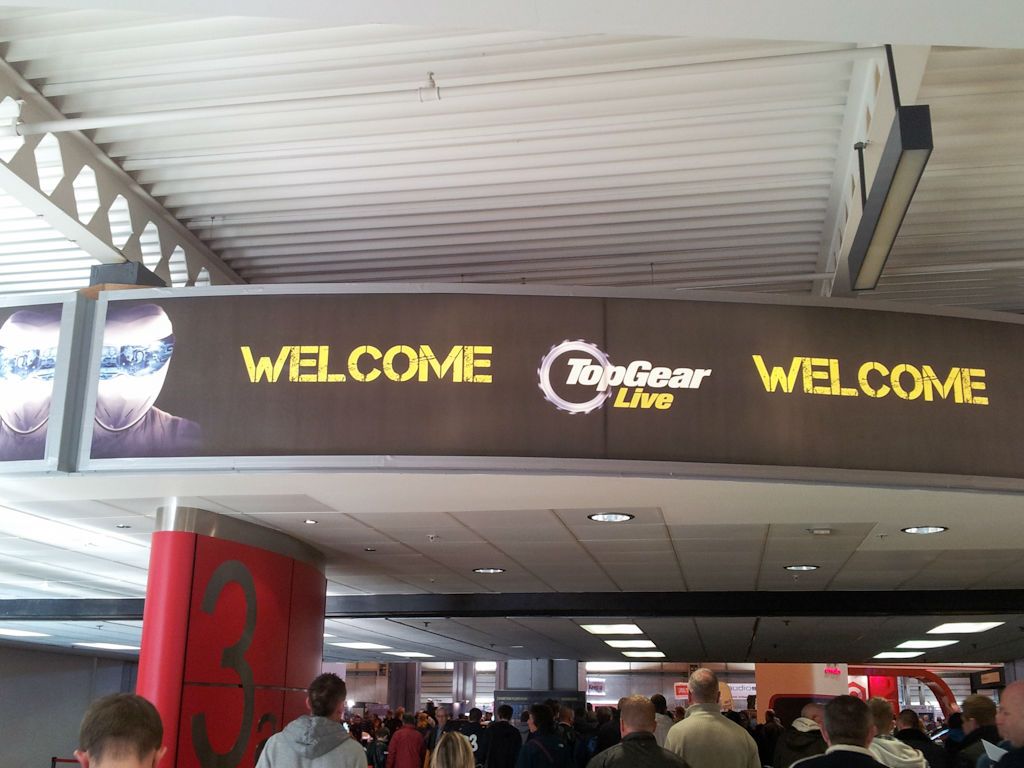 The past weekend was the UKs turn to see Top Gear Live, the worldwide travelling show featuring May, Hammond and Clarkson.

It was packed, walking into the main hall where there were cars from Citroen, Aston Martin, Mercedes and some exotics from varying car collections.

You couldn’t really get to see these properly, as you were shoulder to shoulder, being pushed and shoved around the place. Trying to get pictures was ridiculous too, there were so many other people trying to do the same that it was a bit of a free for all, so I gave up.

Ideally the displays and stalls should have been spread over two halls to thin the crowds out! Amongst the small stalls selling car related items was quite a few random ones, there was a bloke selling perfume, and further along a stall selling Barbie Dolls?!

I thought this was a car related exhibition/show not my local market! 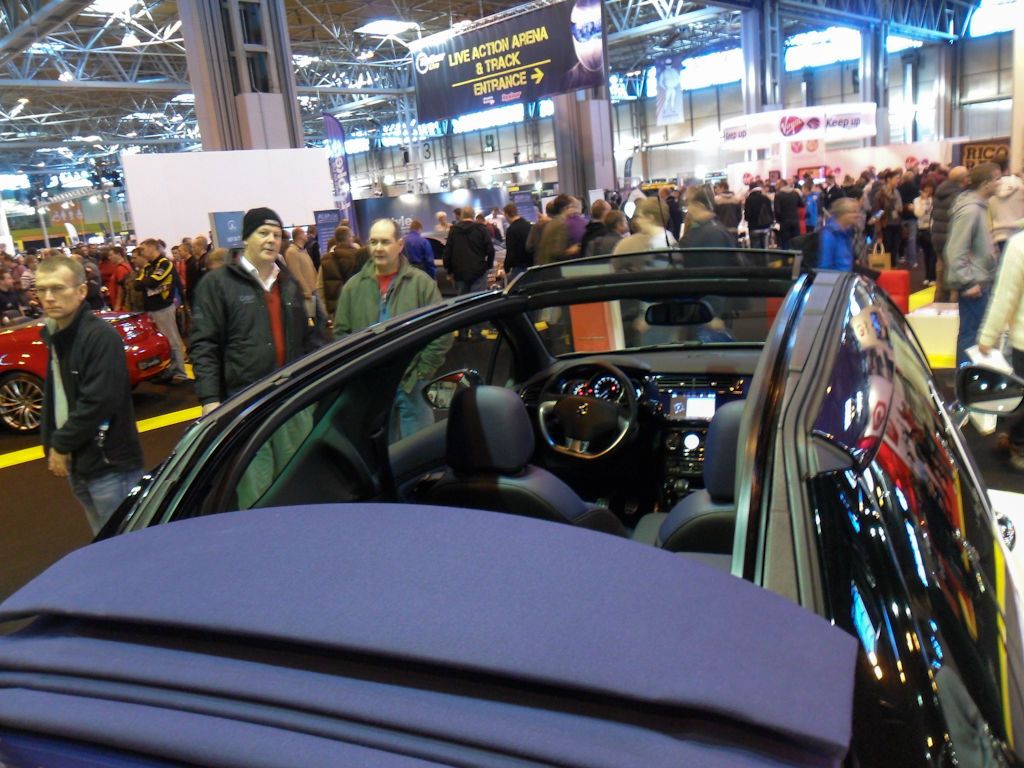 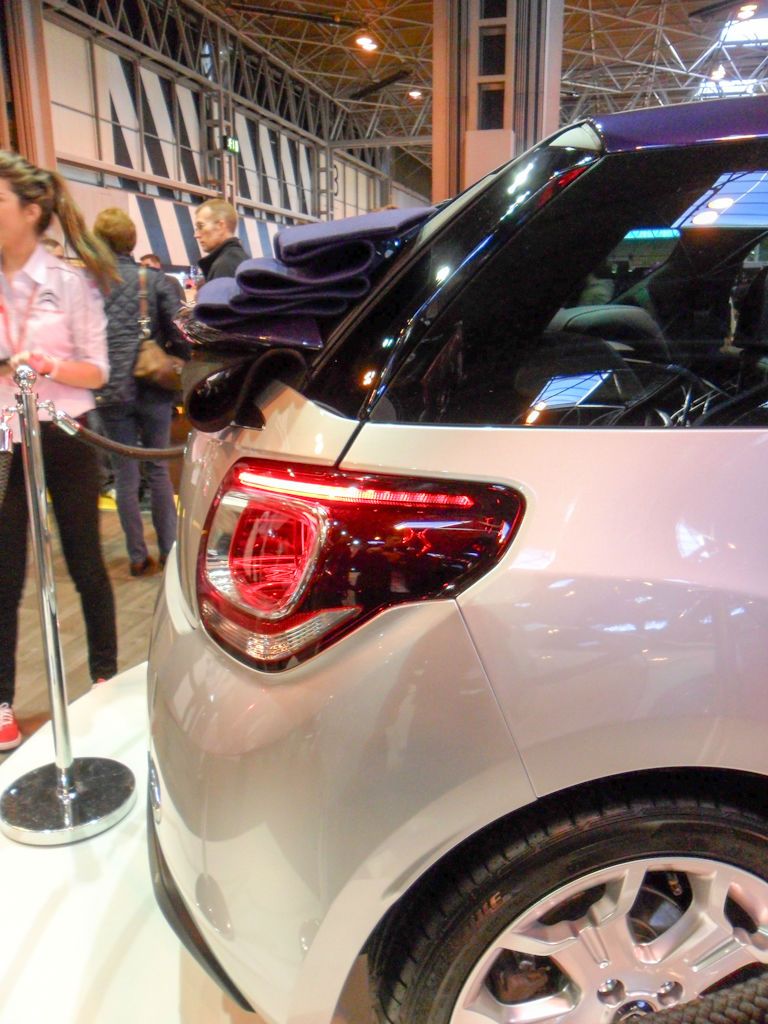 Having “Platinum” tickets, we were allowed to go into the backstage area and paddock. This was located in the far corner of an adjoining hall; the rest of the hall was empty free space.

Going into the walled off back stage area wasn’t anything to write home about. There were a few cars from different Top Gear shows, along with some vehicles used in other Top Gear Live events.

The cars were grouped in 3 to 4 behind barriers, spread out which made it look very sparse; we walked though it in about 5 minutes…it was that uninteresting.

Going into the “paddock” was equally unexciting. There were displays from a custom car company along with a few current hot hatches. I am not sure why it was called the paddock as these exact cars didn’t feature in the show, nor did any of the vehicles from the behind the scenes section?! 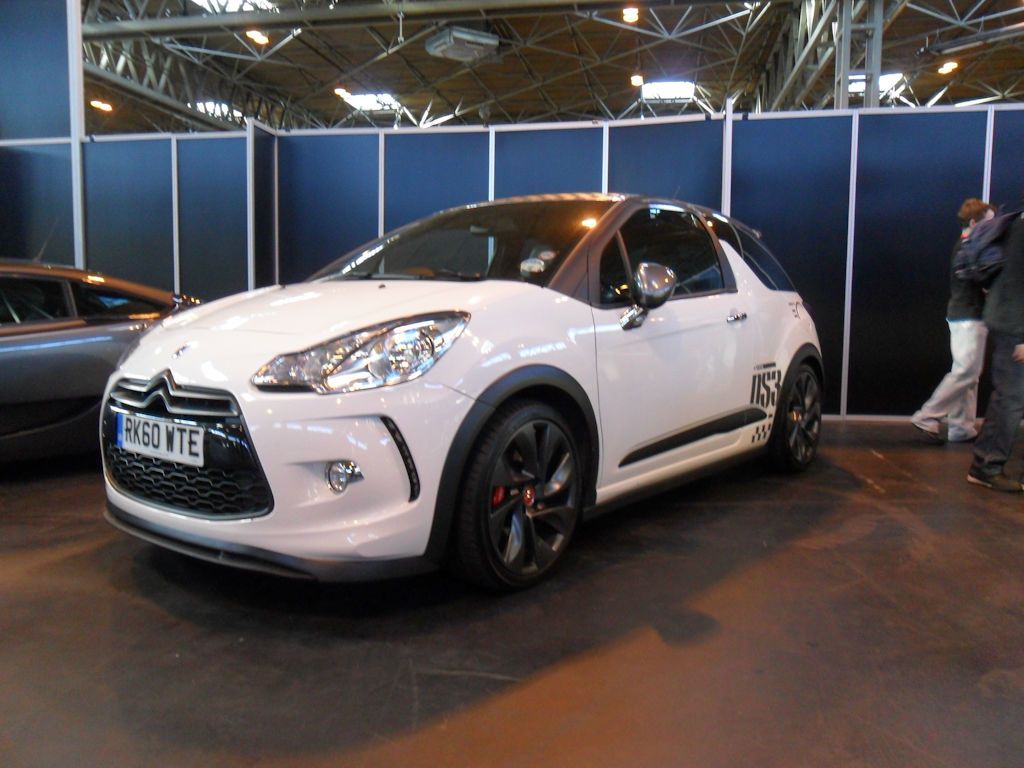 After being ripped off for a tea and blueberry muffin we walked through to yet another hall, where the actual show would be.

There was only one entrance and it filled with thousands of people as far as you could see, again shuffling along shoulder to shoulder for about 15 minutes until we reached our entrance to the stand. The view was great, no pillars or posts, and we were right in front of the action. 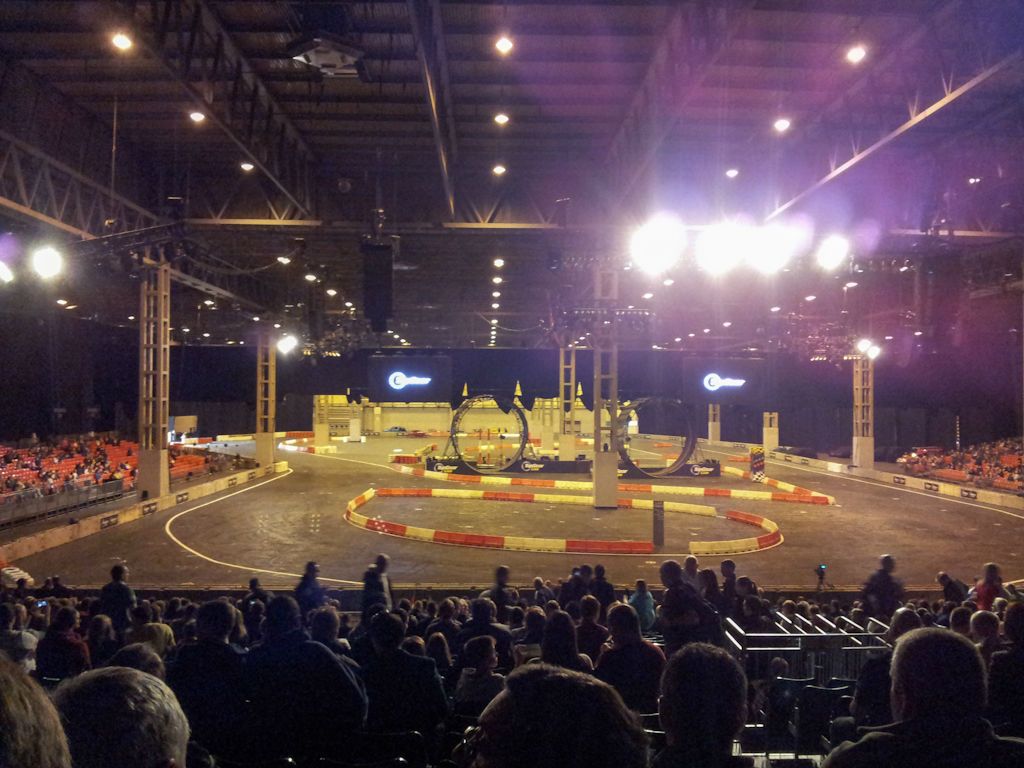 Firstly there was a 40-minute show presented by Tiff Needell and Vicki Butler-Henderson.

It included a race with Tiff and The Stig in a GT86, 90’s era Rally car sprints, hot hatch races (grudge matches as they were called) and a race between Tiff and Vicki, along with others in “half cars”.

For me this first half was the best part of the day, to see the rally cars that I grew up with going for it round the track was simply brilliant! The hot hatch races were also very good and thoroughly entertaining!

There was a short 15-minute break while the set was changed round for the Top Gear part. Clarkson, May and Hammond drove on with their V8 powered stage.

They talked a bit and took the pee out of each other as usual before getting on with a stupid challenge…which was May and Clarkson in old Fiestas being slowly spun round by Hammond in a BMW and hitting other cars to one side of the stage……….this went on for two rounds and was just dull to be honest.

The saviour of the Top Gear show was the stunt team, their displays were spread in-between short appearances from the “three egos”. Stunts included Aston Martin Cygnet ballet, FMX riders on fire in a Halloween theme section, and a fire show, which included burning Porsches.

The highlight was the Supercar show, in which a Lexus LFA, Mustang GT500 “Eleanor” and convertible CLK GTR were on display (among many others). It was good to see so much precious metal in one room! 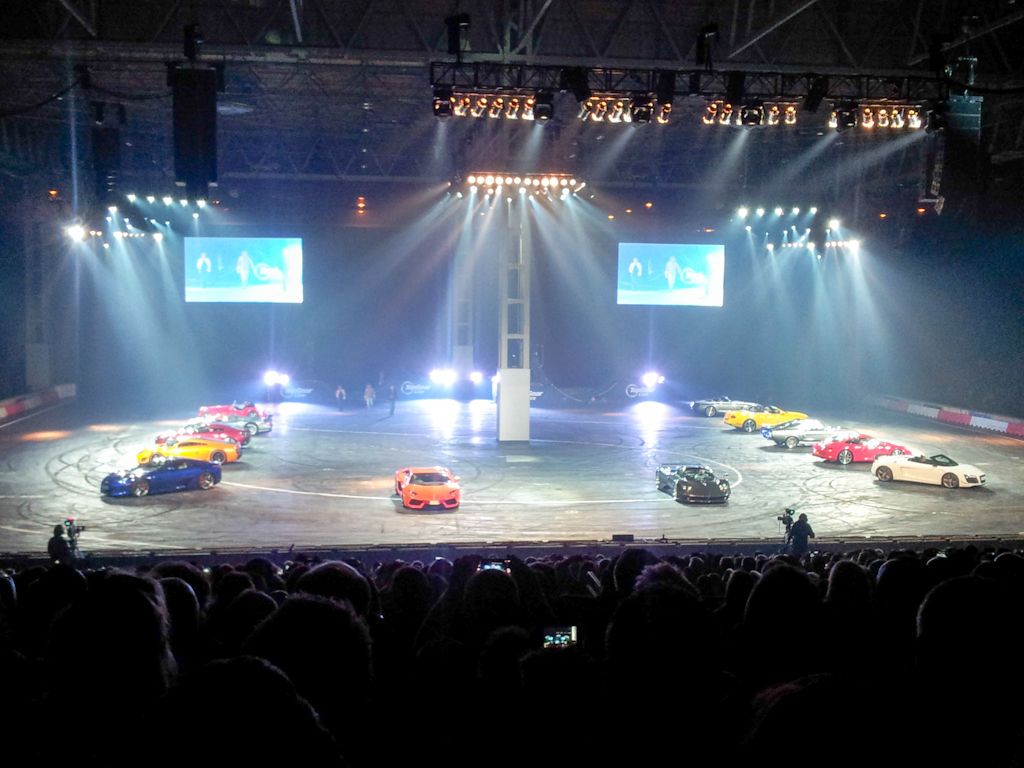 Again Hammond, May and Clarkson pratted around playing sidecar polo. Which involved Clarkson pretending not to know how to ride a motorbike, whilst yelling “Look, I did a skid!” multiple times.

There was no racing whatsoever in the Top Gear section of the show, which was disappointing as it would have been great to watch some more races.

The show finished and we spent 25 minutes trying to exit the event through the display hall, against the flow of people coming in for the next show. I have no idea why there wasn’t another exit opened up, everyone would have got out far quicker. 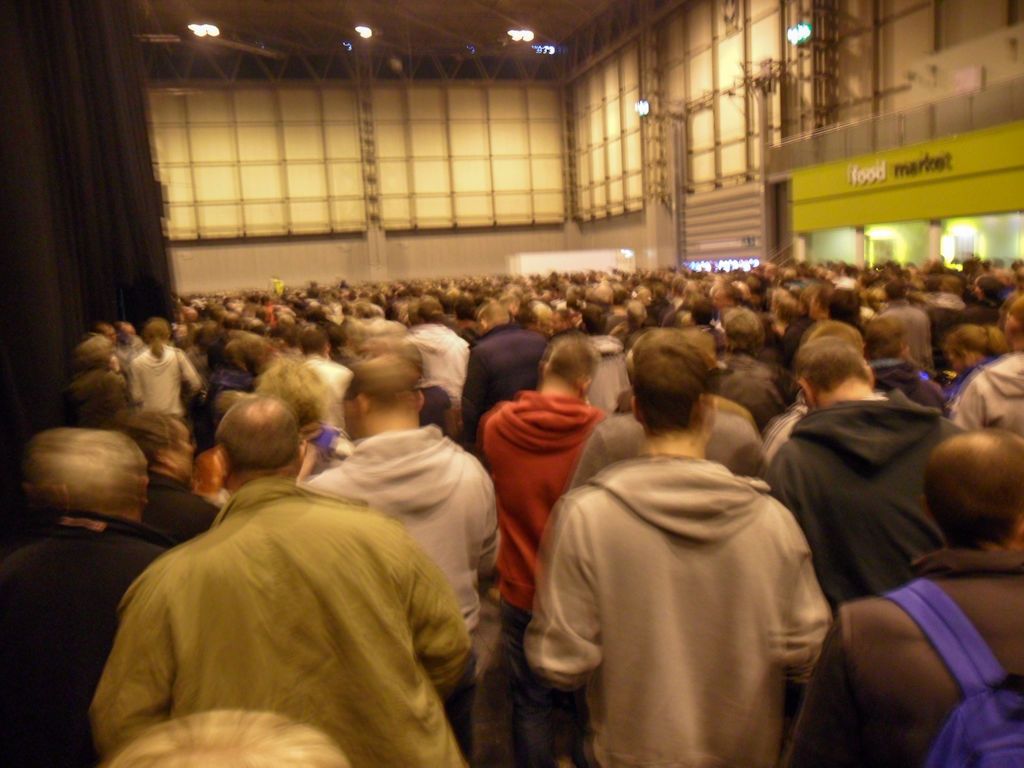 (Sorry for the blurry image i was shuffling!)

Basically the whole day was being in a massive crowd, shuffling around, not seeing an awful lot, and having to be bored watching random challenges that didn’t really relate to anything!

At £75 a ticket (for Platinum access) it wasn’t cheap, if you are a real petrol head there are far better ways to get your fix!

Get along to Goodwood for a start; you can get a ticket for nearly half the price of our TGL Platinum pass.

Next I would advise to go watch some racing at your nearest track. A day out at Silverstone to watch GT or World Endurance racing is about £20, that’s a full days racing.

You could go to three events, and still have change instead of going to Top Gear Live! If its exotic cars you’re after go to the start of Gumball 3000 in London, it’s completely free to attend and the cars you see there are on par, if not better than TGL.

The Platinum access doesn’t add an awful lot of value, the backstage and paddock wasn’t worth the premium. Nor was being able to sit in “Platinum” only areas to get food or drink. Just stick with the basic ticket if you really want to go!

As a footnote that will not apply to everyone, the Press Office at the venue was pretty bad, twice when I went there it wasn’t being manned, even after waiting around for 10 minutes nobody was there.