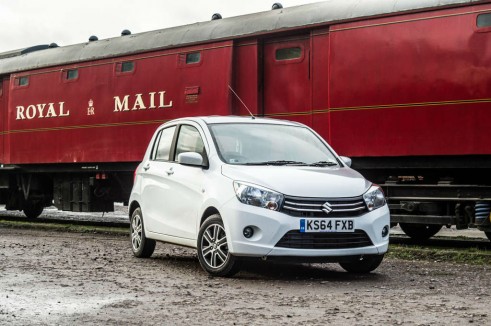 Suzuki are soon to retire the historic Alto name, in place of it we now have the Celerio…not as catchy granted, but is it a worthy successor?

We took the SZ4 Celerio for a drive to find out. 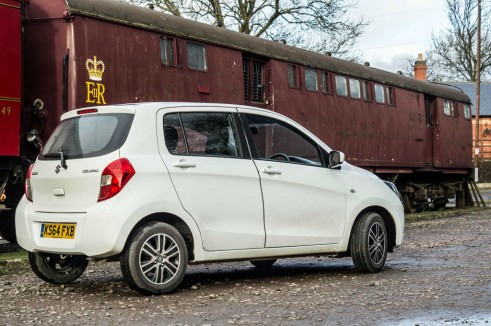 Suzuki have marketed the Celerio as an A+ segment car, this is due to it having class leading interior and luggage space. This means you end up with a rather short but high sided car, much like a Hyundai i10.

A bold front end has a soft look to it, with its large grille and corner set headlights, fog lights are standard on the SZ4 model and break up the bumper nicely. High slab sides feature two styling lines top and bottom.

At the back things get a little more square looking, especially with regard to the C pillar – that rear quarter glass is quite abruptly finished. It gives it a somewhat disjointed look compared to the front end. 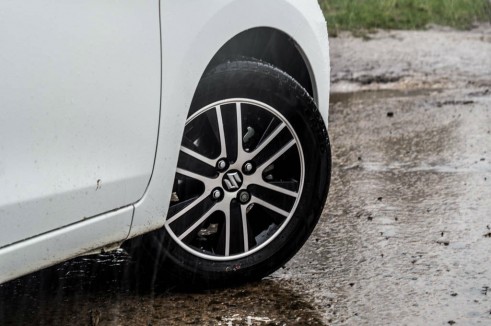 As standard you get 14” alloy wheels, which are diddy but cute!

Overall it’s a smart looker and although the taller, upright stance may not suit some, it looks better and offers more room than the squashed looking Alto. 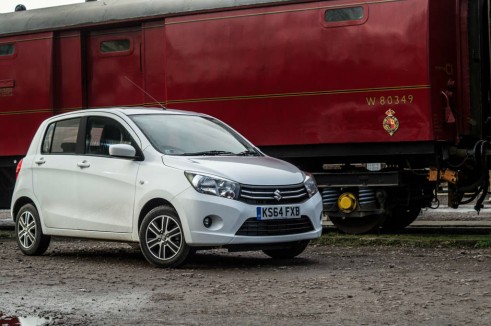 Fire up the three cylinder and it’s pretty well refined on tick over, normally with a three pot you get some vibrations being sent into the cabin but these seem to have been completely omitted on the Celerio.

Accelerating away and it still stays composed, you only really notice the thrummyness when revving it hard above 4,000 RPM.

For being a tiny 1.0 litre it makes progress well. It’s never going to be rapid, but it’s geared as such that you can leave it in third around town and have plenty of acceleration on tap as it sits in the middle of the power band.

Due to the longer gearing you only get 5 gears, but sitting at motorway speeds it ambles along comfortably. It also feels pretty well planted for being such a small, light car, whether it’s on the motorway, or taking some rough B roads it handles lumps and bumps surprisingly well. 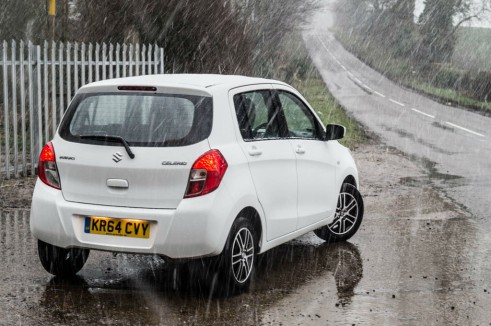 The steering on the other hand is a bit of a let-down. Dead of center it is pretty lifeless, you feel as though you have to constantly make adjustments to get the little Suzuki to stay straight. You also have to turn it a fair bit before you actually start to feel a response from beneath you. Once you get past about 10 degrees in either direction it’s fine.

Around town the super light controls make it ideal, it really is effortless to drive. But with that ease of use you do lose that connected sensation.

Working the gears right and keeping the revs where the power is means you can saunter along at a pretty decent pace. Although the 0-62 time is 13.5 seconds it never feels underpowered.

Urban MPG is quoted at 55.3, over our 80 mile test route we managed 49.7 over mixed driving conditions, so 55 isn’t above the realms of possibility. 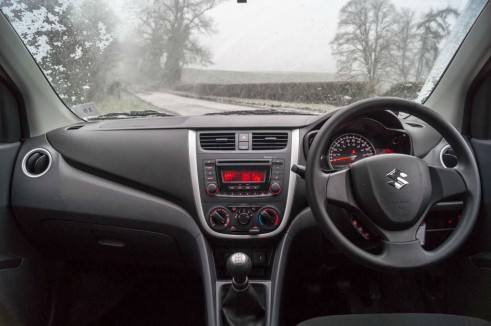 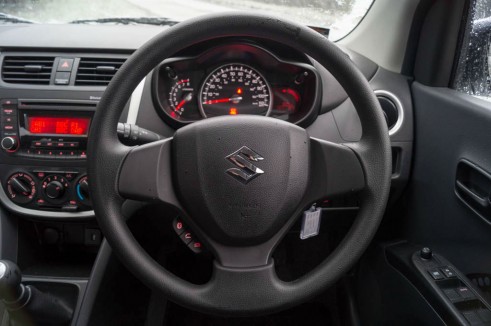 Once inside you notice that the dash is a near scale replica of that found in the Swift. Plastics are of a hard wearing nature…some would say scratchy, but you know they will stand the test of time!

You get a DAB radio, air con and Bluetooth as standard, all of the stereo and heating controls feel solid and well put together. 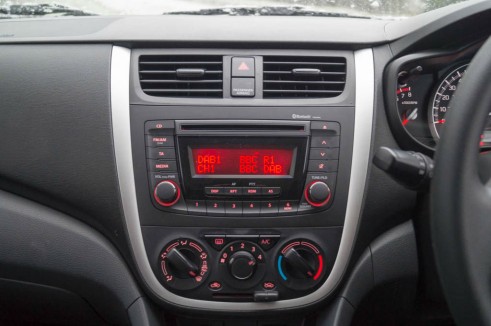 Door plastics and mouldings are probably the worst part about the interior, they do look and feel cheap.

The doors are also scarily thin. Whilst this creates a roomy inner space, having more between you and the outside world does make you feel a touch safer…even if it is just plastic trim! 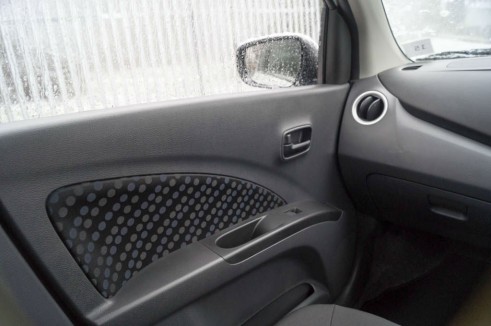 Saying that though the sound deadening is very good throughout, cruising along a dual carriageway you are well insulated from both road and engine noise, which was surprising for a car in this segment and price point. 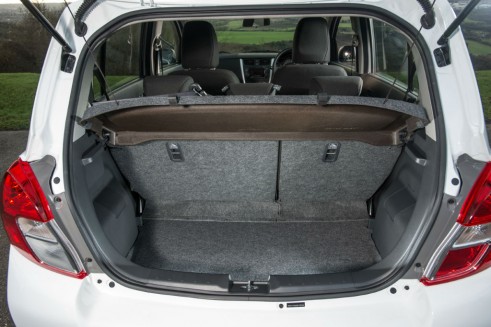 Boot space is class leading at 254 litres…but that is only 3 litres more than a Citigo, would you really notice that in the real world?

Head room is very good all round thanks to the cars tall stature, a 6 footer will fit in the front with ease, but the back is slightly cramped in the leg department. 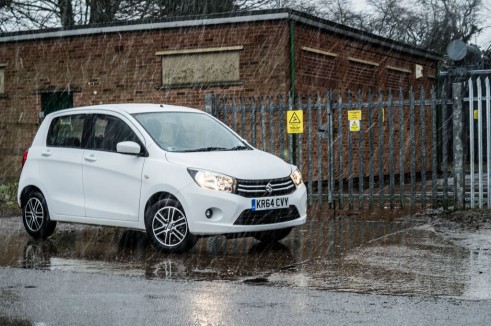 The Celerio makes a great budget city car, its small proportions and easy to use controls will surely generate a lot of sales.

Prices start from £7,999 for the basic SZ3 model, however I’m not sure it can compete with the likes of a 5 door Citigo/Mii/Up which can be had for £8,560 – albeit with less standard kit.

If Suzuki had come in at a price point well below the average, say £6,999 for SZ3 trim that would have been really appealing. But with such high quality competition – in an already tight market segment – it makes the Celerio a harder sales pitch.

Another option would be – yes it’s bigger – but you can get a Swift starting at £8,999, I know what I would rather have! 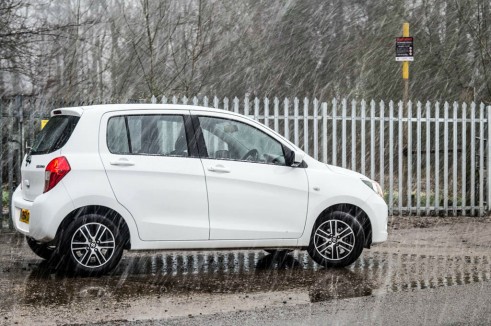