Subaru’s Impreza is a legend. Known for its rallying prowess it took Colin McRae to his only world championship title back in 1995.

They were forever duelling with Mitsubishi’s Evo, but that rivalry wasn’t just kept on the rally stage. You were either a Subaru guy or a Mitsubishi guy, Impreza or Evo. 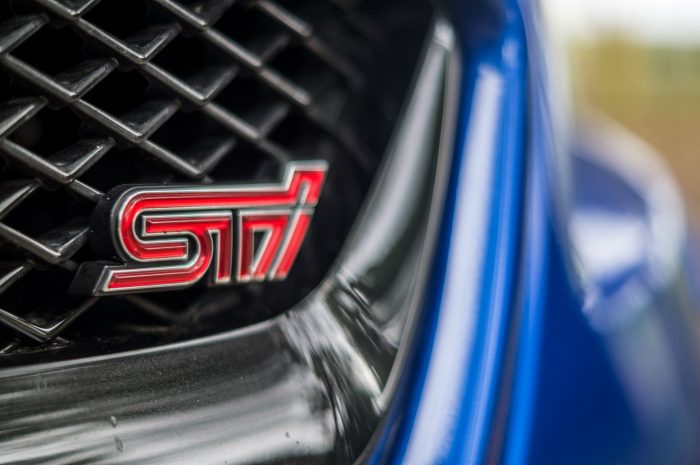 The latest incarnation of the fire breathing Scooby is often thought of as the 2014 Subaru Impreza WRX STi as that’s when it first debuted, so it’s not so much of a new STi really.

Naturally it retains the boxer engine with a 2.5 litre displacement, and turbo’s to boot. Alas it has lost the Impreza title, that nomenclature has been relegate to a limp hatchback.

There is only one spec to be had…dubbed the Subaru WRX STi Type UK. 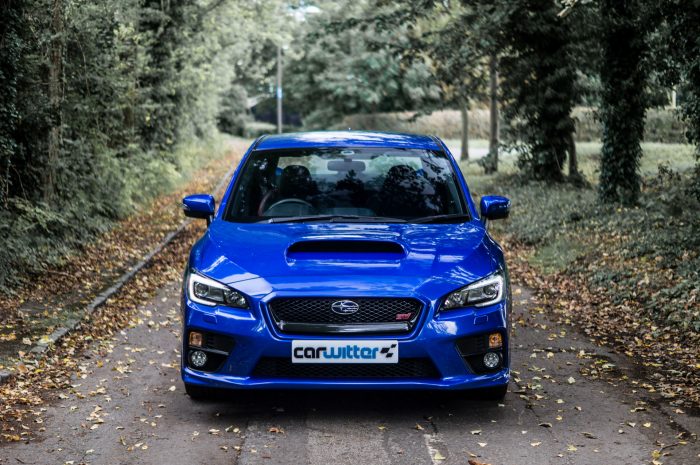 A Subaru isn’t a real Subaru unless it has a huge rear wing. Big check here, it’s huge and looks as though it’s been taken straight off a WRC car.

Wide arches and the angry bonnet scoop give the WRX a menacing look. Colours of choice have either got to be the WR Blue or Pearl White, especially with the anthracite alloys. 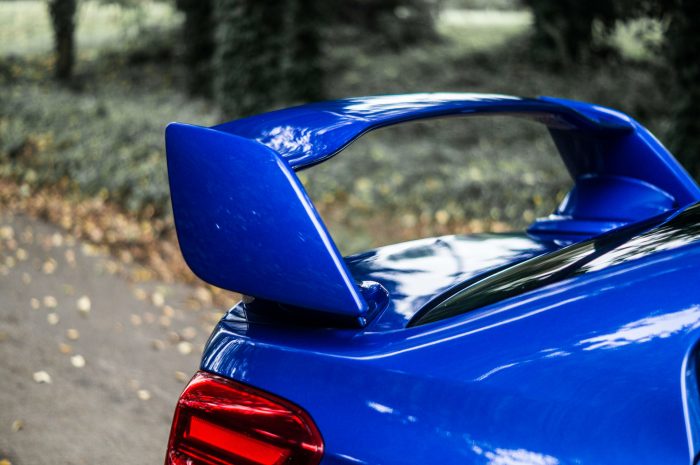 Mechanical. That word sums up everything the WRX STi is. It’s a machine and it feels like it.

The four-wheel drive clunks and grinds at low speed beneath you, when you set the diff lock you can hear it changing, the gear shift feels as though you are actually moving something, the pedals feel analogue and direct. It’s raw. Some would say that’s ‘unrefined’ but it isn’t. It’s engaging, it’s exactly how a car like this should feel.

With a 0-62 time of 5.2 seconds you’d think the WRX STi would feel blistering. It really doesn’t.

Even though it has a turbocharged set up it feels linear. There’s a slight lag in boost, in fact you can barely even feel the boost at times. It just revs, and revs high.

You have to work it, and work it hard to get the best from it. Unlike such modern tarmac weapons as the Audi S1 (0-62 time of 5.8 seconds) you can’t just bury your right foot, let the boost rise and head for the horizon.

The Subaru makes you earn it, you need to change down and use the gearbox, cycling through that short ratio ‘box. But that’s a delight in itself, it feels race car with a short throw and weighty feel, you have to be precise with it. 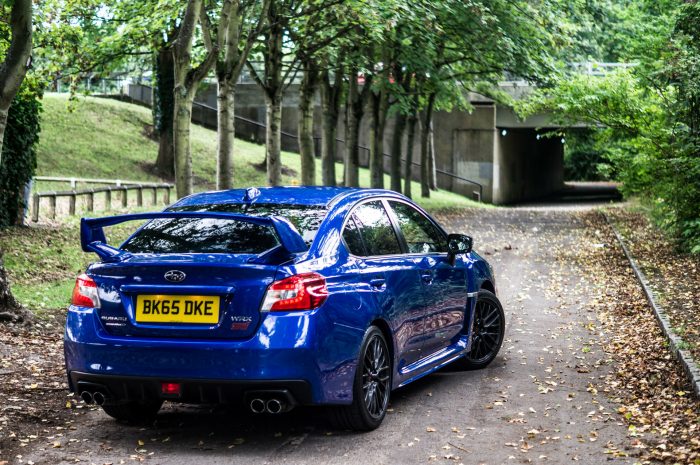 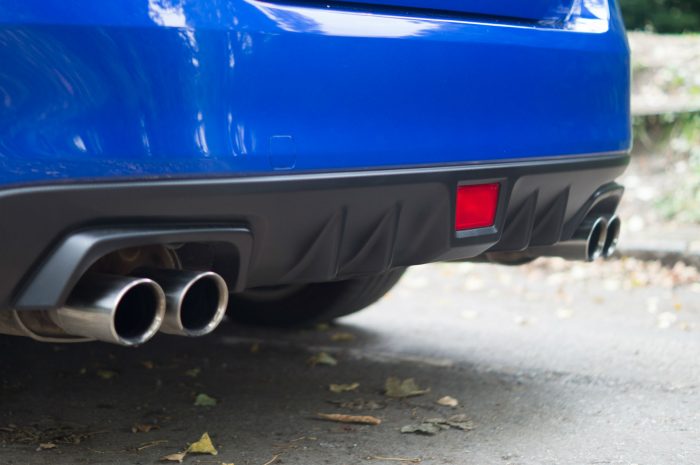 The engine is also suitably old school, lacking direct injection the four-cylinder boxer looks like a real piece of machinery sitting under the bonnet. No plastic covers in sight, you can just see the belts and metalwork spinning round in front of you.

Handling is nice and sharp, the hydraulic steering feels nice and weighty, not too over assisted. Mechanical.

Over our time with the WRX we only manage 17.4 MPG, but that was pure around town mileage. 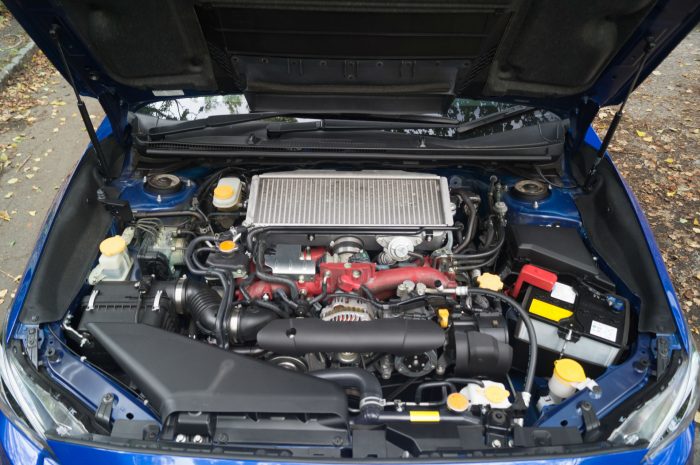 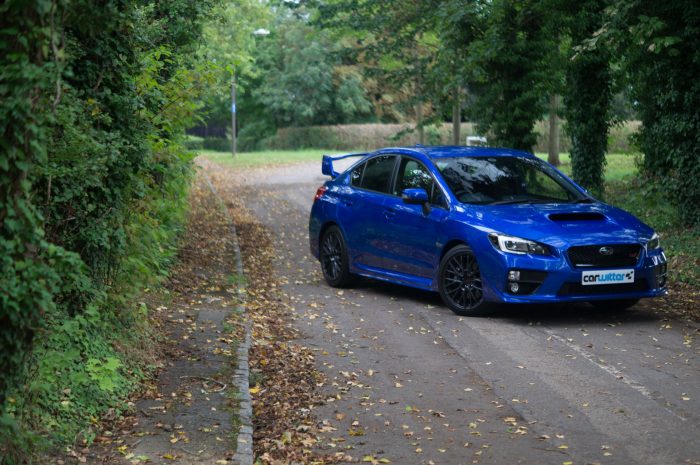 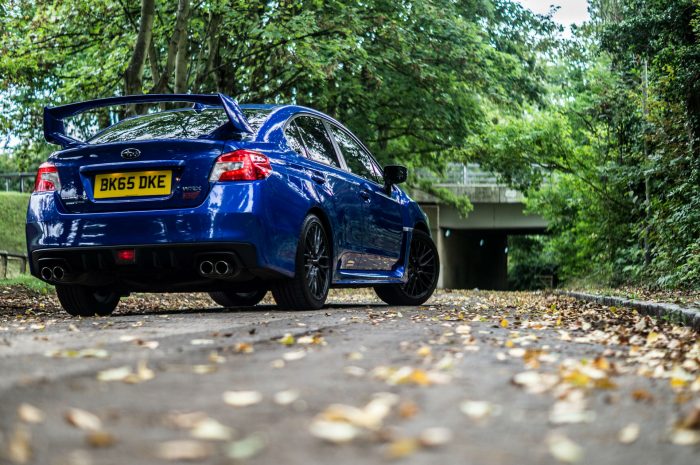 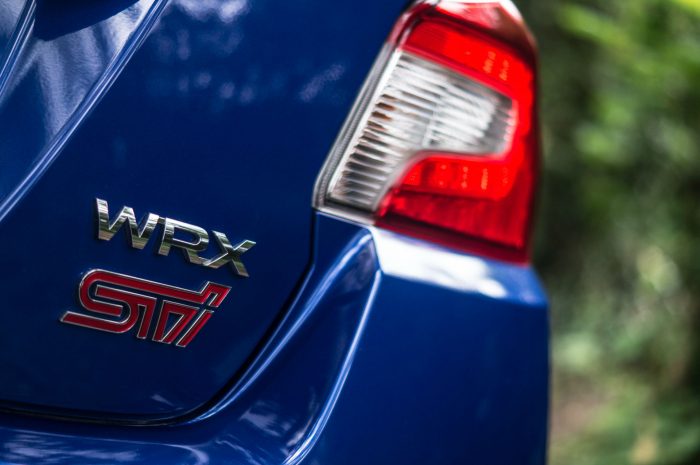 On the inside the WRX STi is let down somewhat. It feels 90’s. Lots of plastic, some shiny, some not, a plethora of different screens, fonts and odd controls for each.

That small screen centrally mounted can’t be controlled by anything other than those plastic buttons in the middle of the dashboard ridge. It took me a while to work out how you to actually do anything with them. 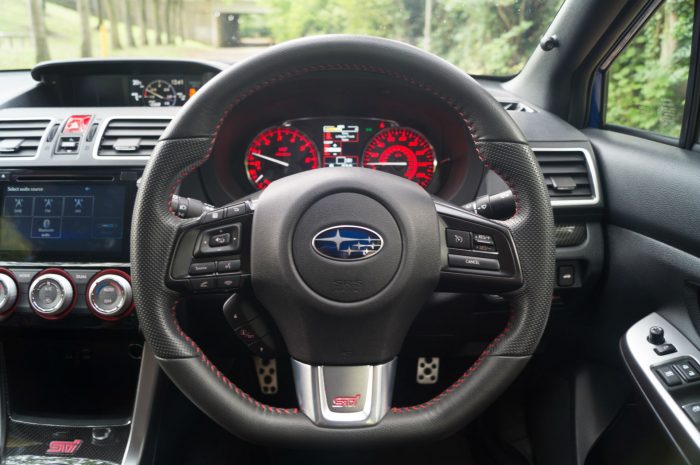 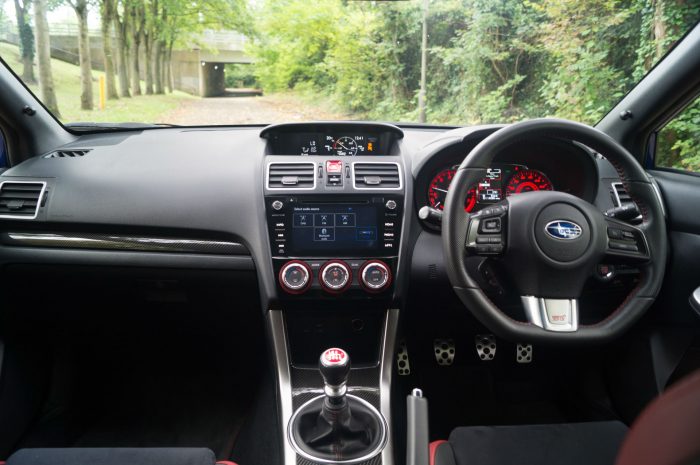 There’s no sat nav, that was a European option only. Great.

There are some plus points though, the seats are superbly cosseting, holding you firmly in place through the bends. The leather steering wheel with perforated grips is a nice touch, but more alcantara would’ve been good.

Some faux carbon fibre bits are splashed throughout, but there are some cheaper silver plastic parts that look a little Halfords spray paint.

It’s a shame that the interior feels so 90’s. It needs a proper overhaul to bring it up to the standards of the current hot hatch crop. Hopefully they will get it sorted in the next generation. 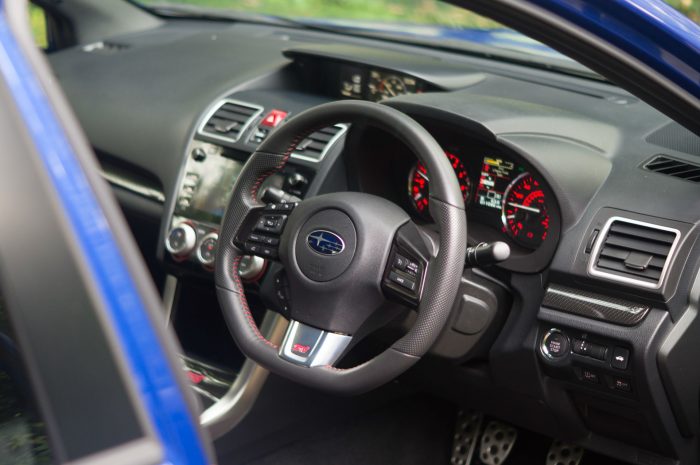 Starting at £31,180 you’re really paying for performance, as the interior isn’t the best and you can’t option it up to make it any better, granted the exterior looks are a big plus. It looks mean, menacing and fast.

But with only 296 BHP and 407 Nm it’s hard to justify the Scooby over our hot hatch pick of the crop, the Golf R.

In five door guise that tips the budget at £30,505. It has the same horsepower and is only fractionally down on torque. The interior is nicer, the engine feels punchier…granted it’s not mechanical in its feel, the Germanic ‘white good’ nature means that most of the fun has been stripped out. 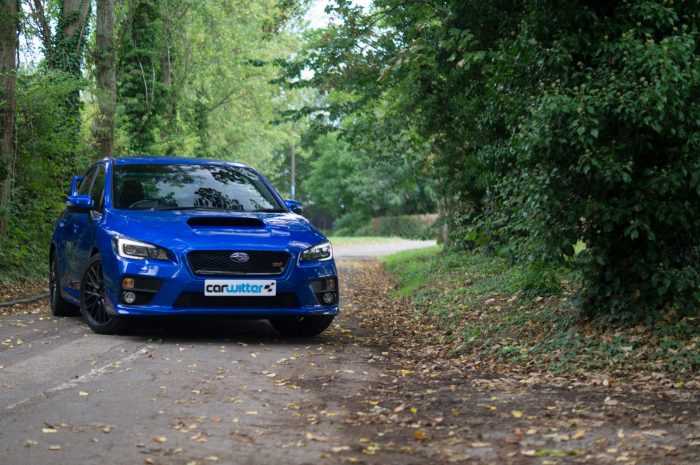 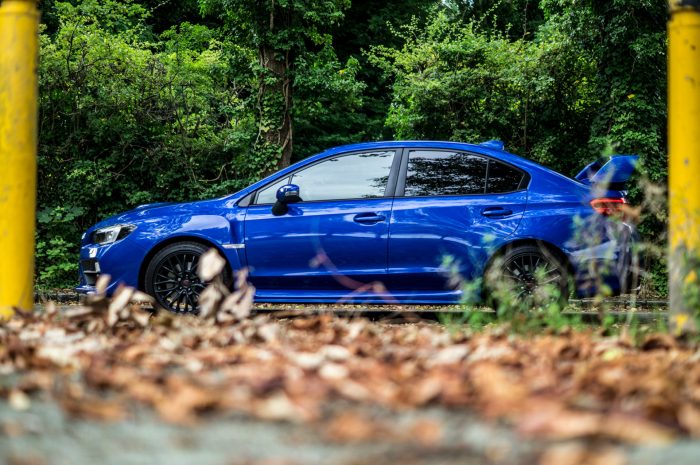 Ultimately, and sadly, the WRX STi is a car for Subaru enthusiasts only. Which is such a shame, as it’s an awesomely engaging car.

As much as the interior feels like a 90’s tape deck, its driving aesthetic is from the same era, but that’s what makes the car. You’re a cog in the machine, not just along for the ride as you would be in a Golf R.

It would be great for Subaru to come in at a cheaper price point. Let’s say £25k, a 6 grand price drop is unachievable, but it would make the WRX STi competitive.

The underdog. It would then be taken seriously, it’s old school charms loved rather than loathed. It’s not going to happen, but it would reinvigorate the performance side of a once motorsport rich brand. 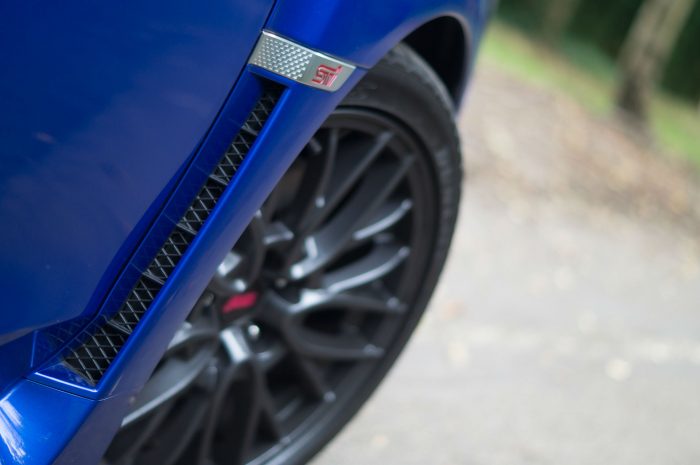 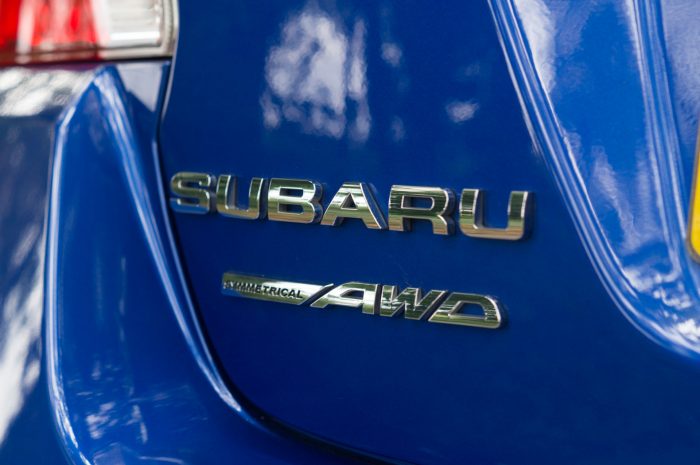 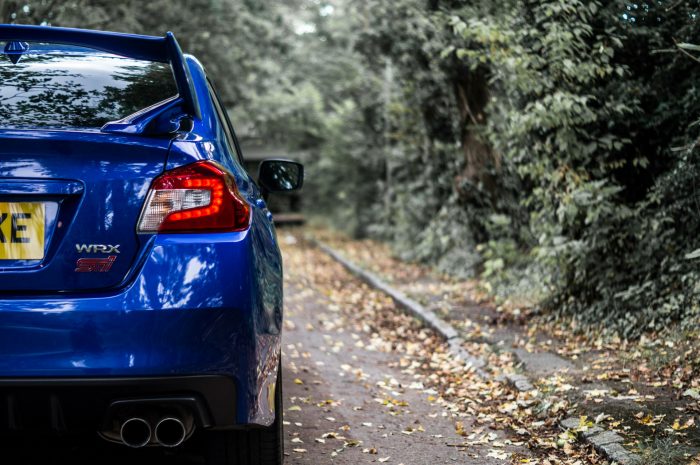