It’s funny how technology changes in such a short space of time, back in 2005 my mother purchased her first ever new car, a 1.4 litre Ibiza ‘Sport’ with 73 BHP….there’s little sporting about it, either in terms of how it drives or looks, it feels slow and has to be worked incredibly hard to get it to go anywhere with gusto.

Taking its modern day equivalent out for a spin shows the stark differences. 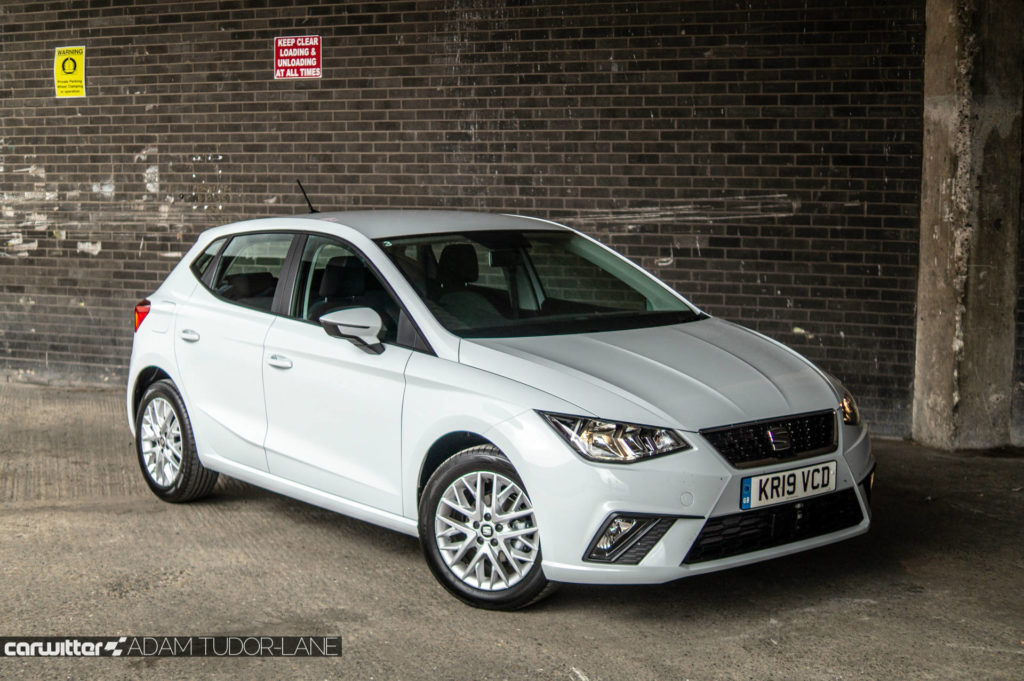 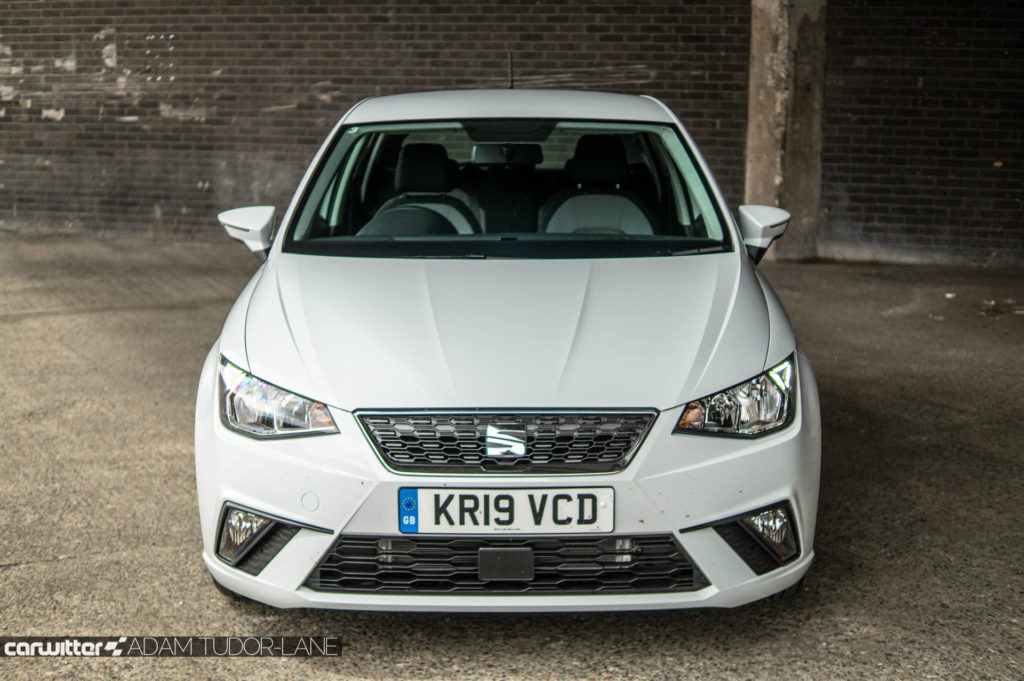 SE Tech adds alloy wheels to the fairly boggo Ibiza, and that’s about it in regards to the exterior looks. Overall it’s a smart looker, average and ageing, but its got far more kerb appeal than a Skoda Fabia.

The only odd bit is the rear valence, looking like a 3D printed afterthought. It’s shell-like in its appearance and looks plain awful. 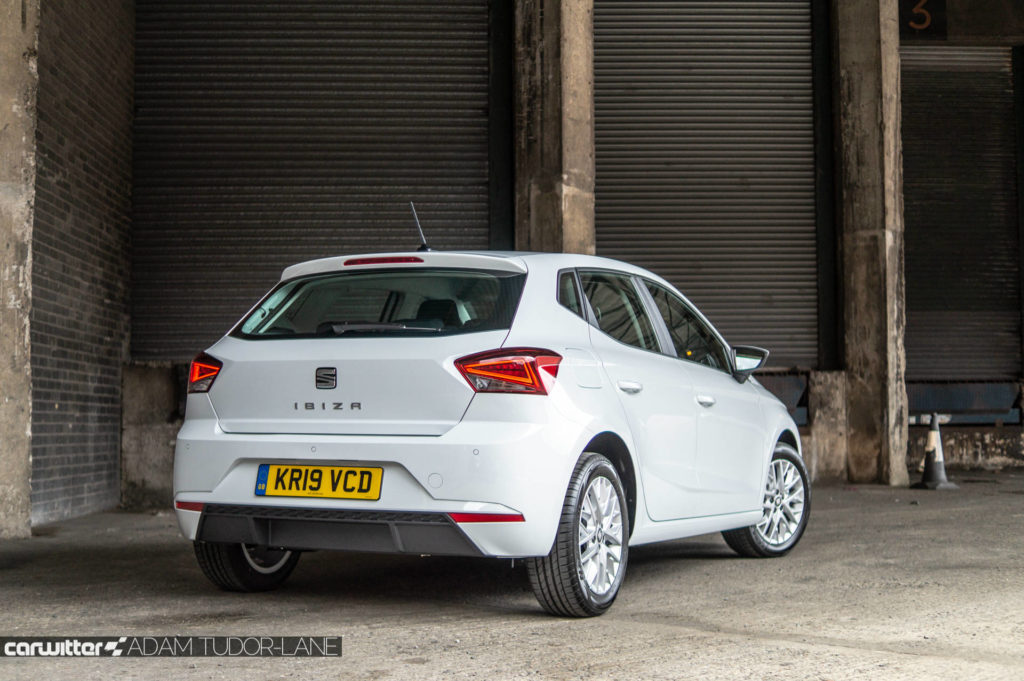 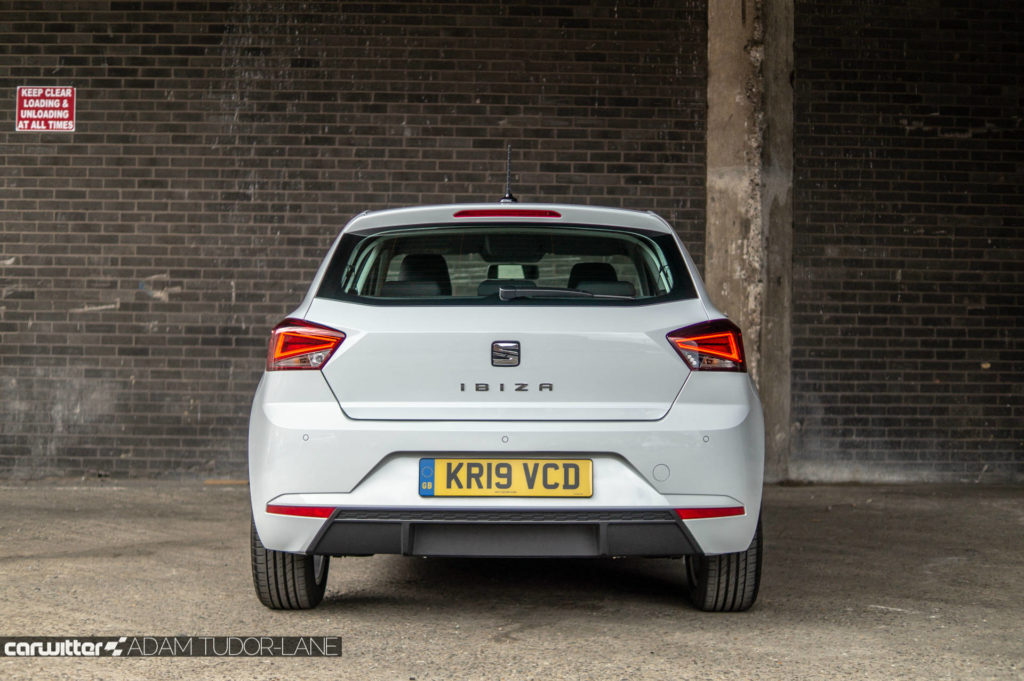 1.0 litre, three cylinders, that’s enough to make more power than a fully blown four pot 1.4 from 14 years ago. It’s the way it delivers that power that makes the difference; the torque is 95 Nm meaning this little Ibiza feels far quicker than it’s paper figures tell.

Around town it’s all you need, up to 30 MPH it zips along with ease, you never have to work the Ibiza hard, and the dinky three-cylinder is punchy up to around 50 MPH. It’s only at motorway speeds you notice the slowdown, that and hills. You’ll be grabbing for a lower cog in either situation until the SEAT picks up the pace. 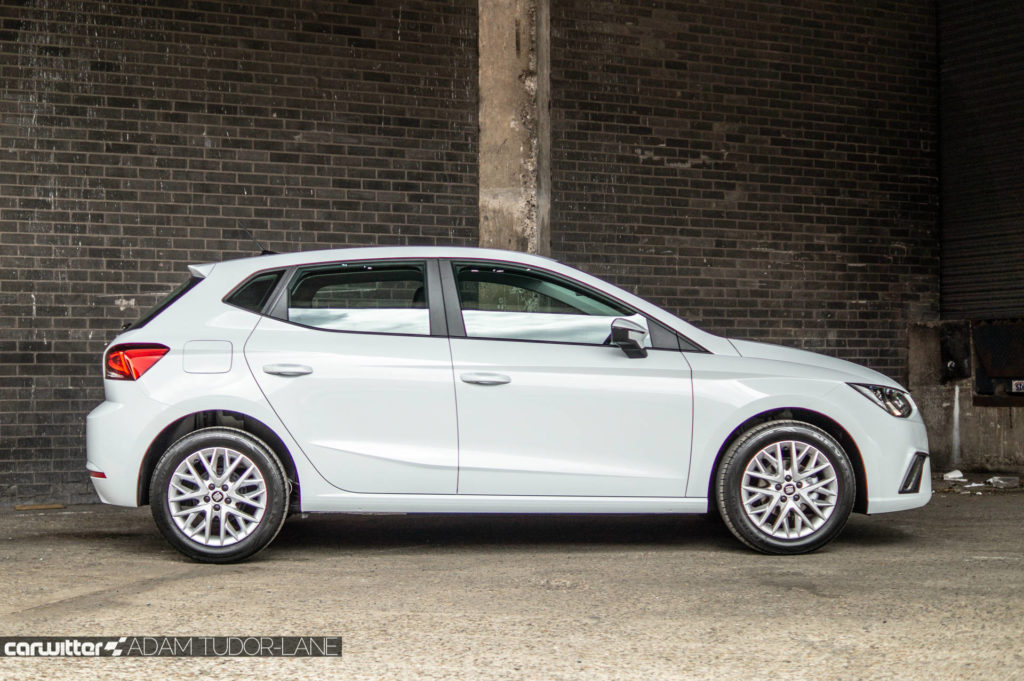 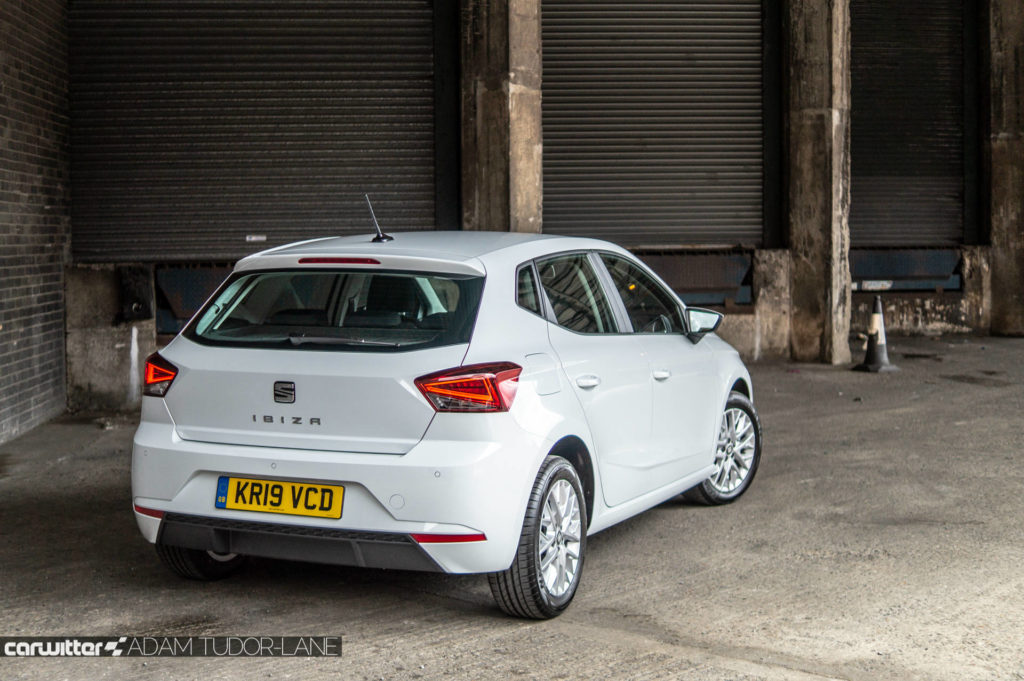 Ride is surprisingly comfy even on the 16-inch alloy wheels; it’s soft enough to soak up the worst our roads can offer. There is however a fair amount of road noise, especially when cruising along a motorway.

Over 70 miles in a car that barely had 500 miles on it, we managed 41 MPG, not bad seeing as we weren’t even trying. This was a mix of fast A roads, B roads and a bit of motorway thrown in. Around town expect this to dip a little if you’re pushing hard, but ’40s should be achievable for the most part. Official Urban figures are rated at 46.3, which is believable. 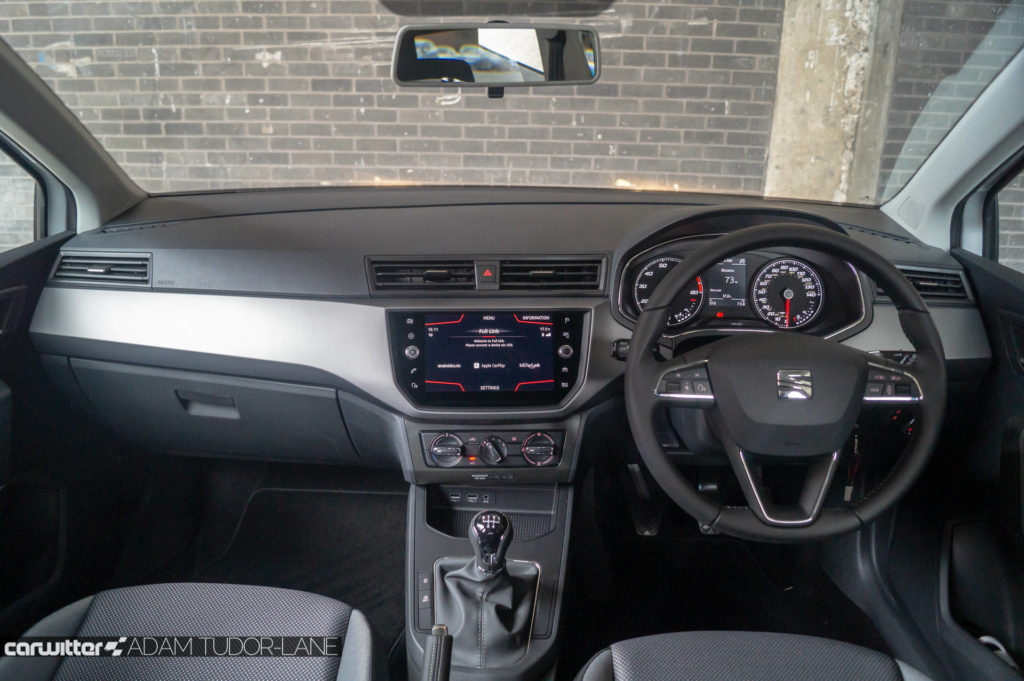 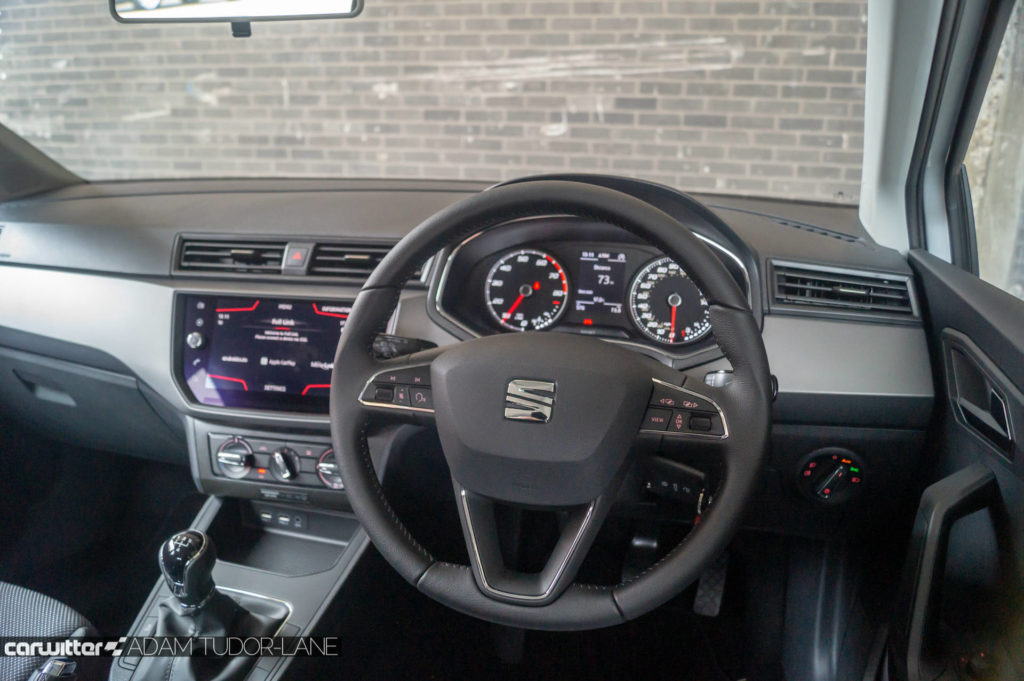 Inside the Ibiza, you’ll find a nice 8-inch infotainment screen, this has the ability to Android Auto, Apple Car Play and screen mirroring so all bases are thankfully covered, you also get 2 x USB slots, SD card and AUX in.

The rest of the interior is nice enough, nothing special and a lot of the plastics are hard to the touch. There are many other hatchbacks of a similar price with far nicer interiors, but then this is where the Ibiza is now showing its age. Manual rear windows are also a bit of a let down at this price… 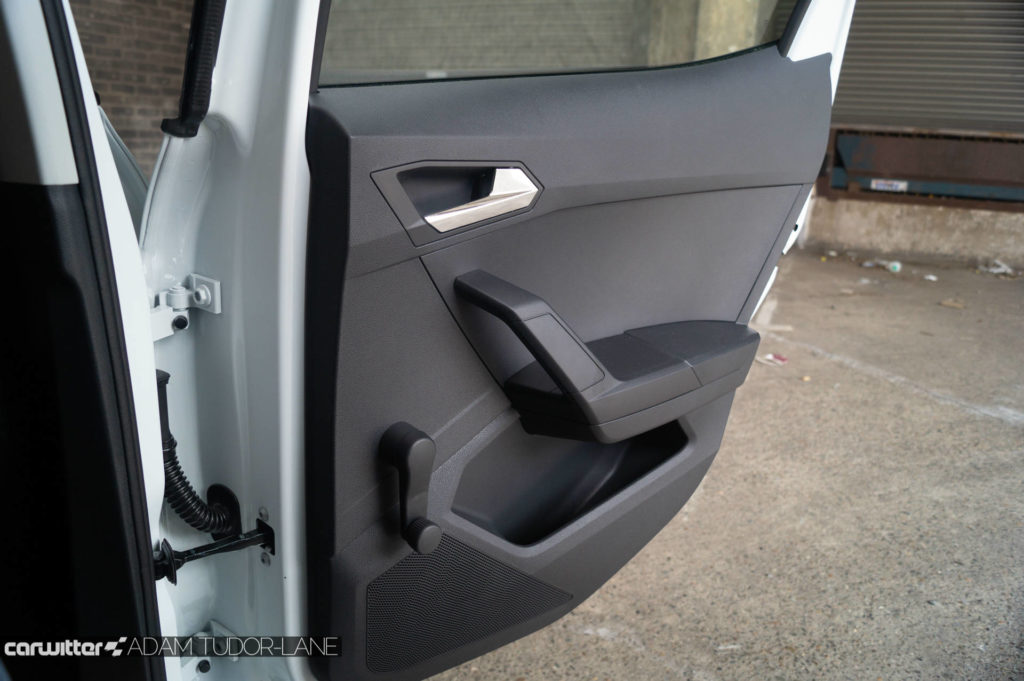 An armrest would be nice, the seats are comfy, and the grey trim makes a welcome break from the boring black you find clothing most car interiors.

Space in the rear is good enough for adults on short journeys; kids will fit in just fine. Boot space measures in at 355 litres, which is more than enough for the weekly shop. 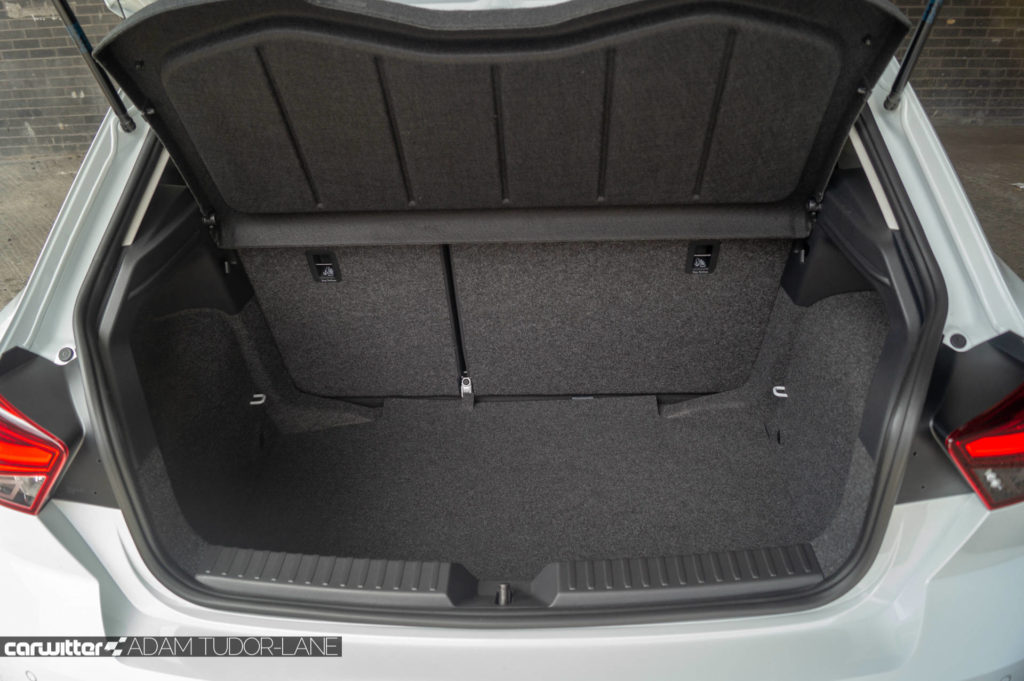 As a second car, the 1.0 litre Ibiza is a healthy proposition, especially when you look at the price per month on finance.

But it doesn’t offer anything special for the money, in fact, you can get the same performance and technology in a new Suzuki Swift SZ-T and for £14,499, saving you £1,600. The interior plastics are…dare we say it…better in the Suzuki.

A closer look at the Alfa Romeo 4C Spider Italia