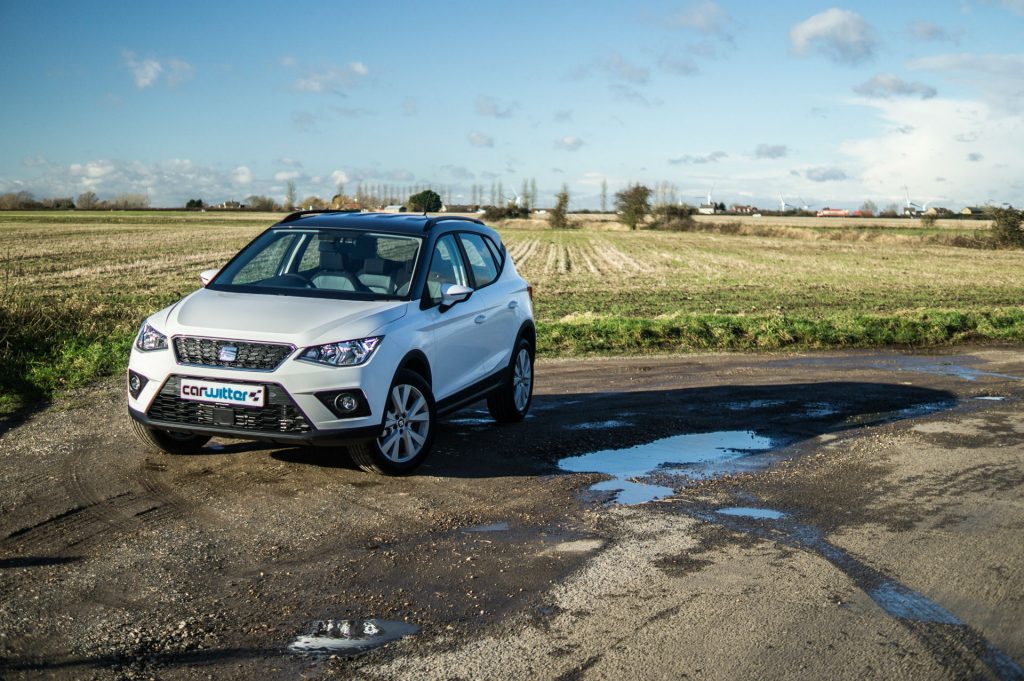 Now this is a tricky one. It looks like any other crossover. Inoffensive, some nice small styling cues, but rather generic on the whole.

Side on, the low-cut A pillar is neat, it matches well with the small swoopy door mirrors, and at the back there’s an upward kick to the C pillar to give the whole roof the floating look. Colour wise I think our test car is the best of the bunch, white with a gunmetal grey roof. It’s classy and looks smart.

If you want something modern, cool and different, there’s far more interesting options on the market. Personally, the Toyota C-HR looks like it’s been dropped from a mothership, and the Hyundai Kona has to be one of the best looking small SUV’s of the moment.

Or you could go the other way totally and opt for the bubbly, bulbous C3 Aircross. All of them are more interesting both inside and out. 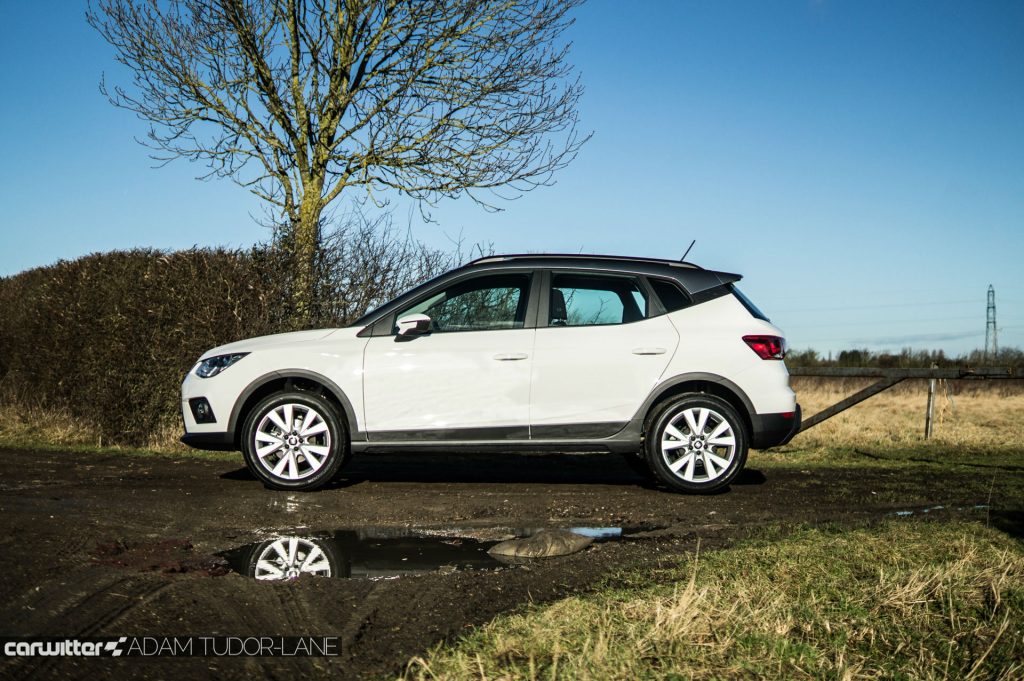 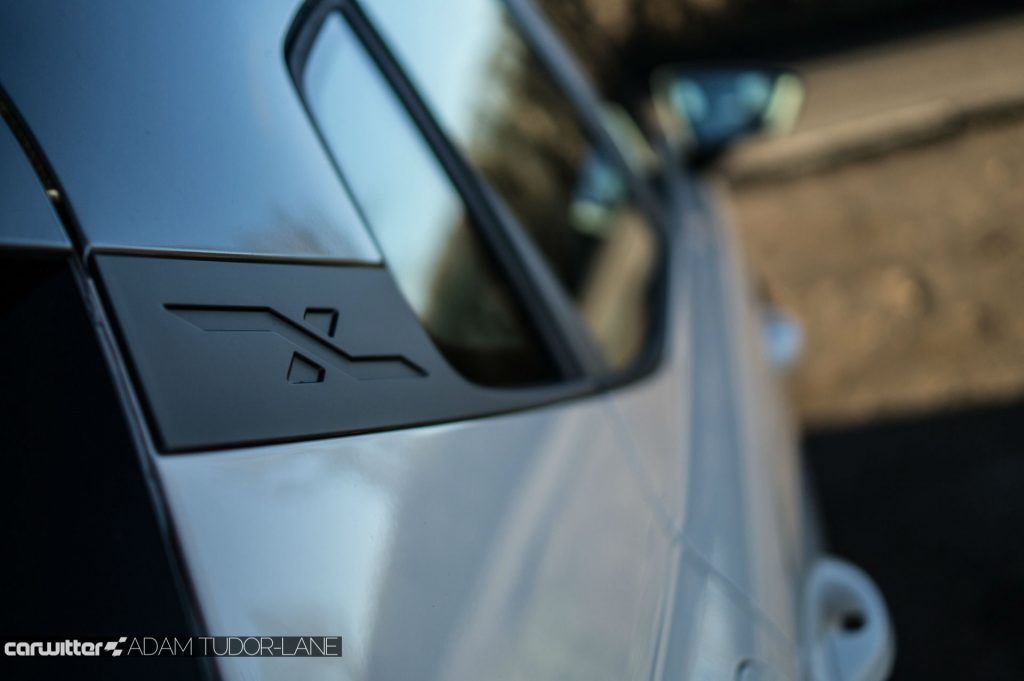 The Arona is available in nine different colours, with either a colour coded roof, Monsoon Grey or Midnight Black.

SEAT really impressed with the Ateca’s handling characteristics, but things are a bit wobblier when it comes to the Arona.

There’s predictable, moderate lean in corners on our SE Technology trim…we didn’t get to try one of the FR models with their sportier suspension, but no doubt things would be more controlled.

Steering is super light and direct, making the Arona easy to place around town. Couple that with the punchy 1.0 litre TSI and nipping in and out of gaps in city traffic is a breeze. 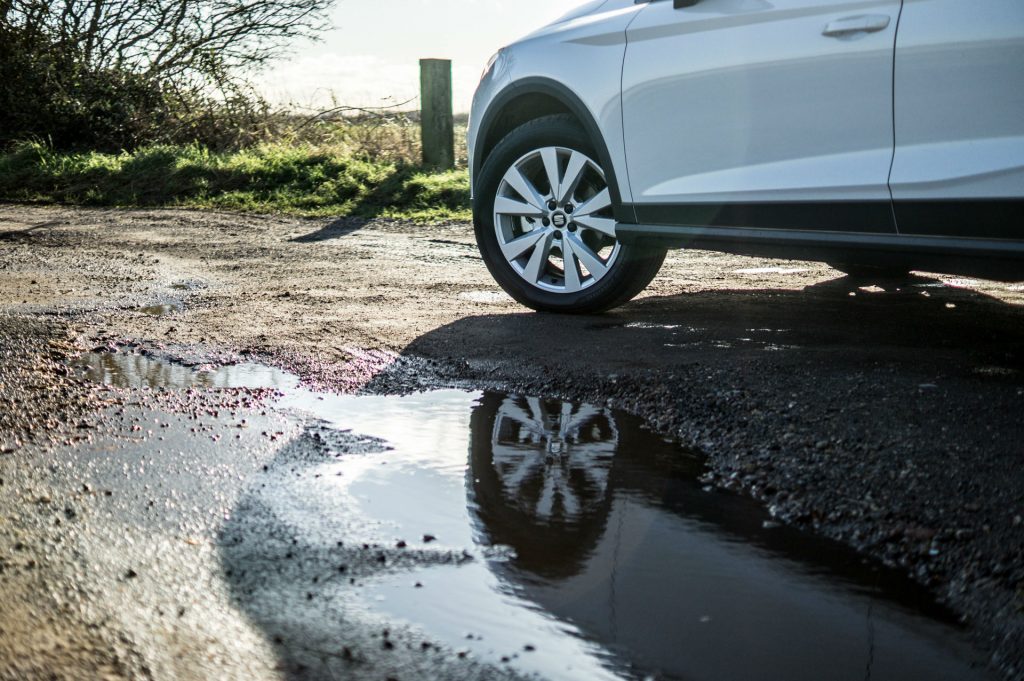 You’ll get a loud thrum once you initially set off, that’s down to the three cylinder up front…think of it as half a V6. The raucous settles down to barely audible once up to speed, you’ll have to work the gears to get it there thanks to the short ratios, but the pick up in third is superb from such a small powerplant.

Lumps and bumps are soaked up with ease, a dull thud being heard beneath you with little of that shock making its way to the cabin. For a small car it rides well, being comfier than some of its rivals and making itself feel far bigger than it is.

It does everything well, but the sporting abilities and fun to drive nature of the Ateca seem to be missing here. We’ll have to try an FR at a later date to see if the tweaked chassis and suspension help. 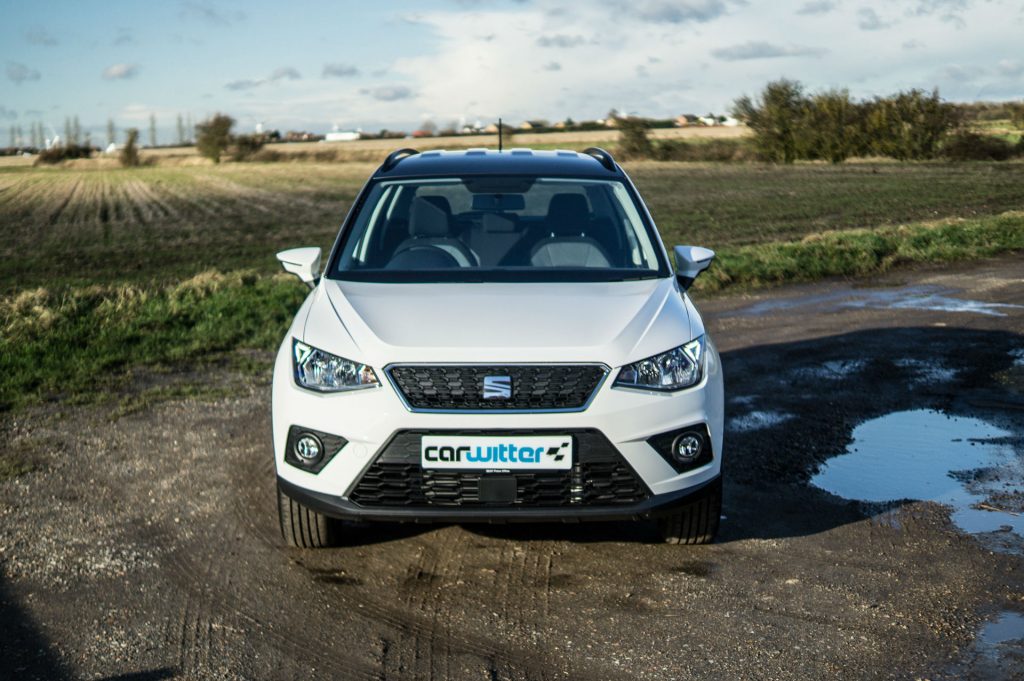 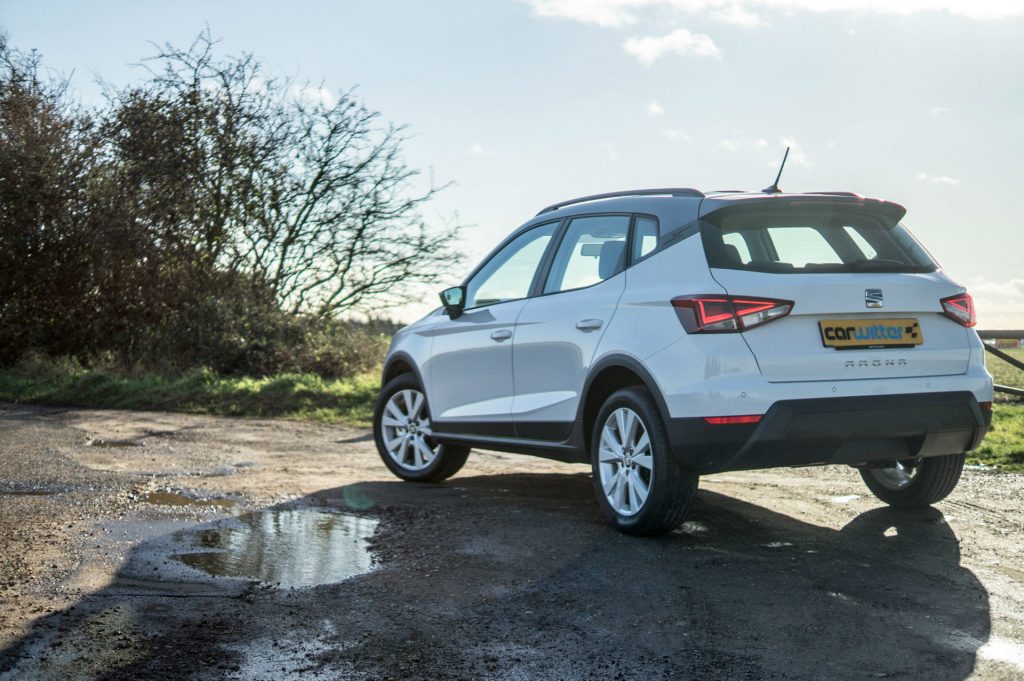 As much as the Arona screams off roader with its 19 cm ground clearance, there isn’t and probably won’t ever be a 4×4 version. For that you’ll have to look to the bigger Ateca.

Hopping inside and you’ll find a nice large 8-inch display with ‘Full Link’, SEAT’s own system that can do Android Auto, Apple CarPlay and Mirror Link.

Well done SEAT, it beats the odd set ups you find in many cars that can only do one or the other. 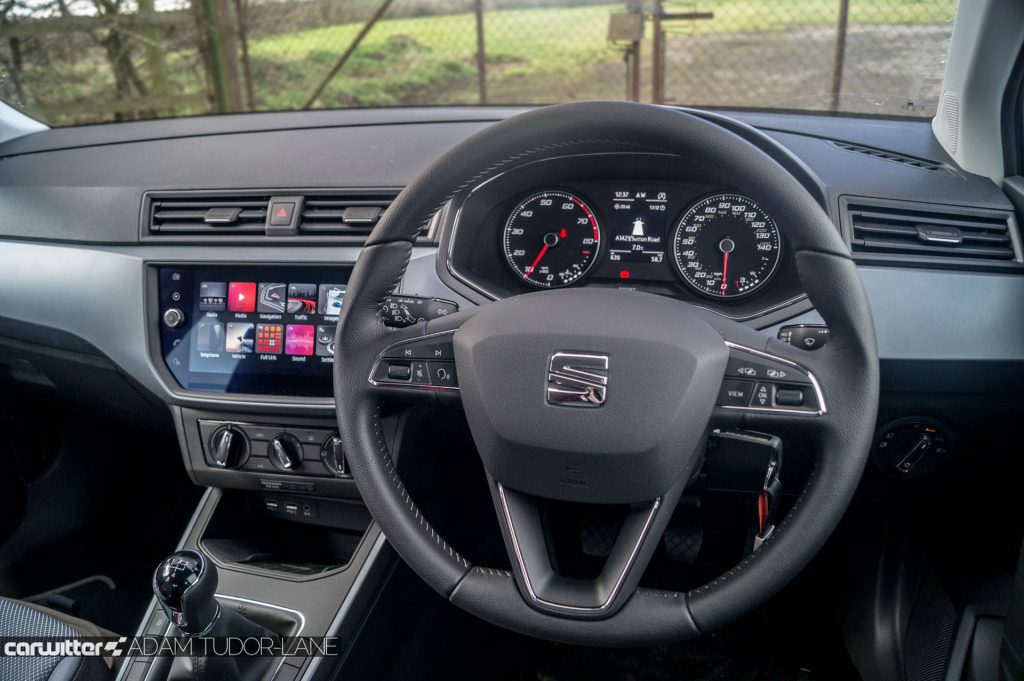 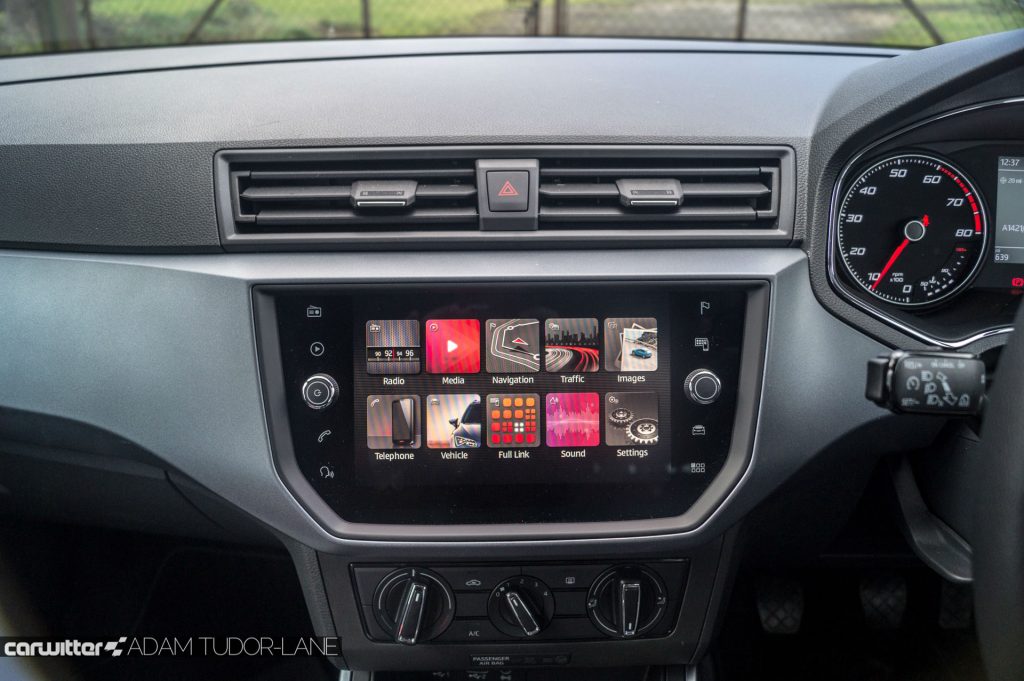 You also get a wireless phone charger, 2 USB ports and 2 SD card slots. Connectivity is well sorted in the Arona, and the inclusion of dials on either side of the infotainment make zooming in on the Sat Nav, or flicking between options a breeze whilst driving.

There’s plenty of hard plastics to be had though, the top of the dash has an average finish to it but catch it in the sunlight and it looks a little cheap and shiny. As are the door grabs, textured but ultimately feel on the budget side.
Moving up to FR trim adds some red stitching across the dash, this matches in with the wheel, gear gaiter and the sportier seats. 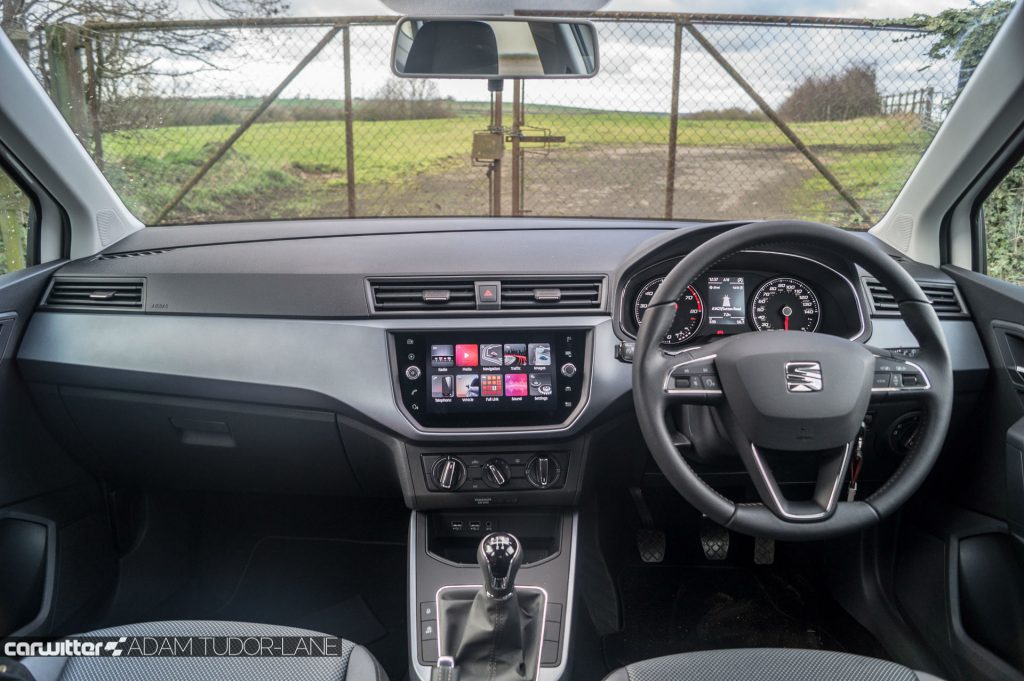 Rear seat headroom is amazingly good, the hip point is quite low and there’s a cut out section in the headlining giving you a few extra inches. Your ankles may be a bit squished, but your knees have room to breathe.

Boot space measures in at a healthy 400 litres, that’s 45 more than an Ibiza. A flat load space makes stowing items easy, and there’s even more space beneath…where the spare wheel should be. 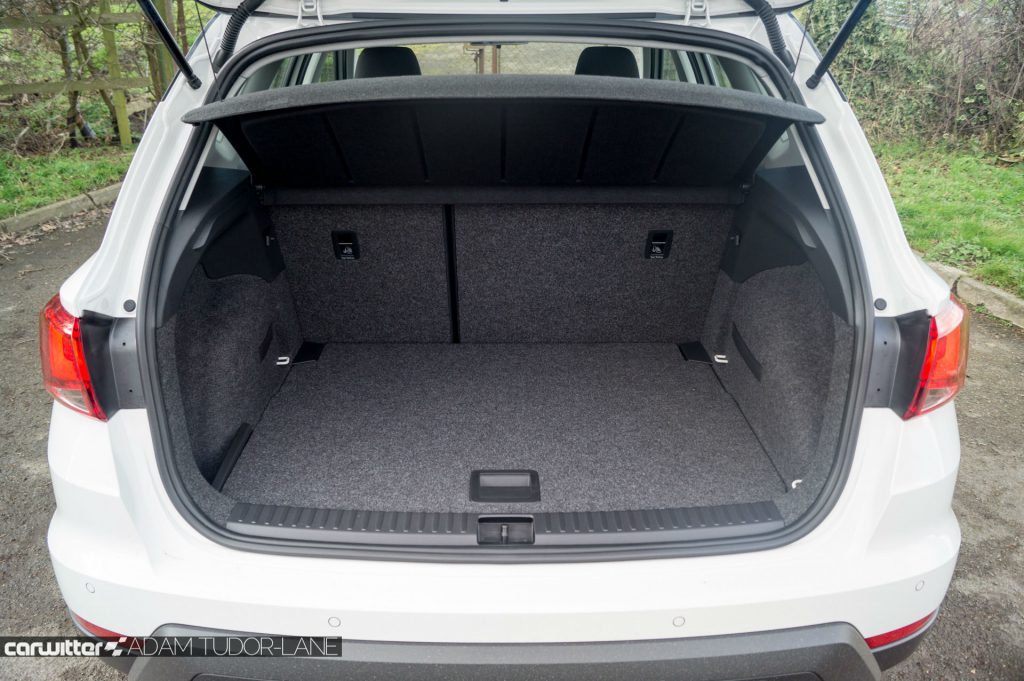 Oh, and because buyers find selecting options ‘difficult’ every Arona is option-less. You just have the choice of Trim, Engine then Colour. It helps keep costs down, and enables faster delivery times.

There are a range of accessories available, some of them self fit. 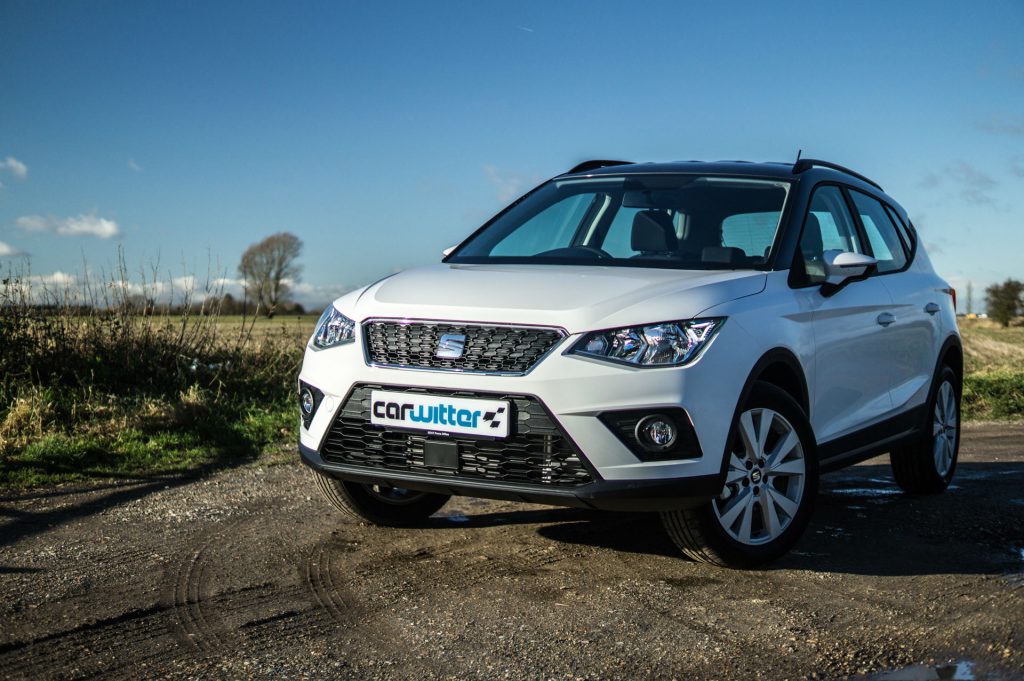 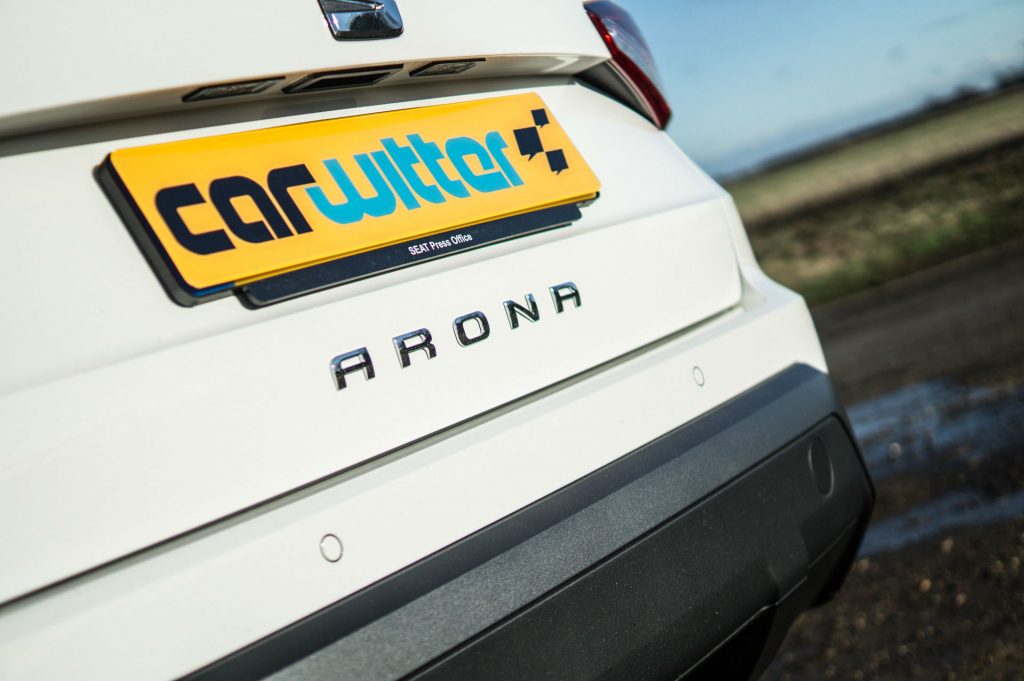 SEAT have played it somewhat safe with the Arona. It’s definitely a SEAT in terms of design, but the Arona is also rather bland…in a seascape of bland crossovers.

It does everything competently, but nothing jumps out. It’s the Golf of crossovers.

If you want, edgy, modern and interesting there are far more compelling options. 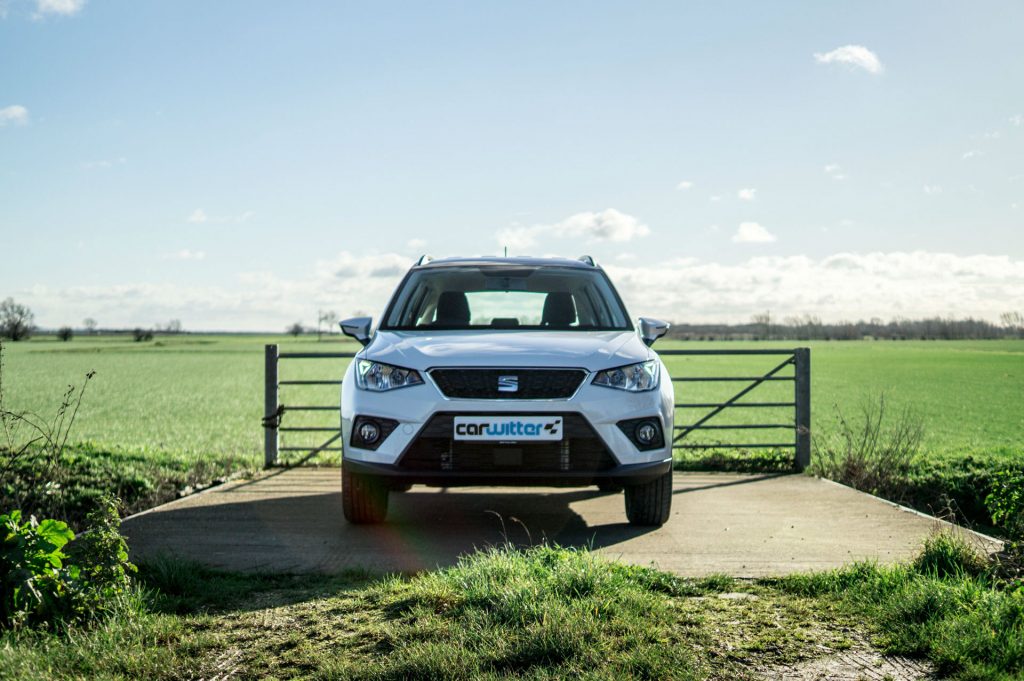