It seems like all the French car brands are finding their design flair once again, and Renault is among them. Their latest Megane is probably one of the most striking hatchbacks on the market right now; they’ve also recently fitted it with a new 1.3-litre turbo engine producing a massive 140 HP, so it was time we got behind the wheel of the latest Renault Megane GT Line.

This model is the top spec GT Line, starting at £20,655. Renault like to keep things simple, so there are only three trims to choose from, with prices starting at £17,715 for the ‘Play’ model. Mid-range ‘Iconic’ will set you back £18,815.
With a few choice options, like the Iron Blue paintwork, full LED headlights, parking pack, a BOSE stereo and the rather pricey £1,200 Alcantara Pack + this model came in at £24,215. 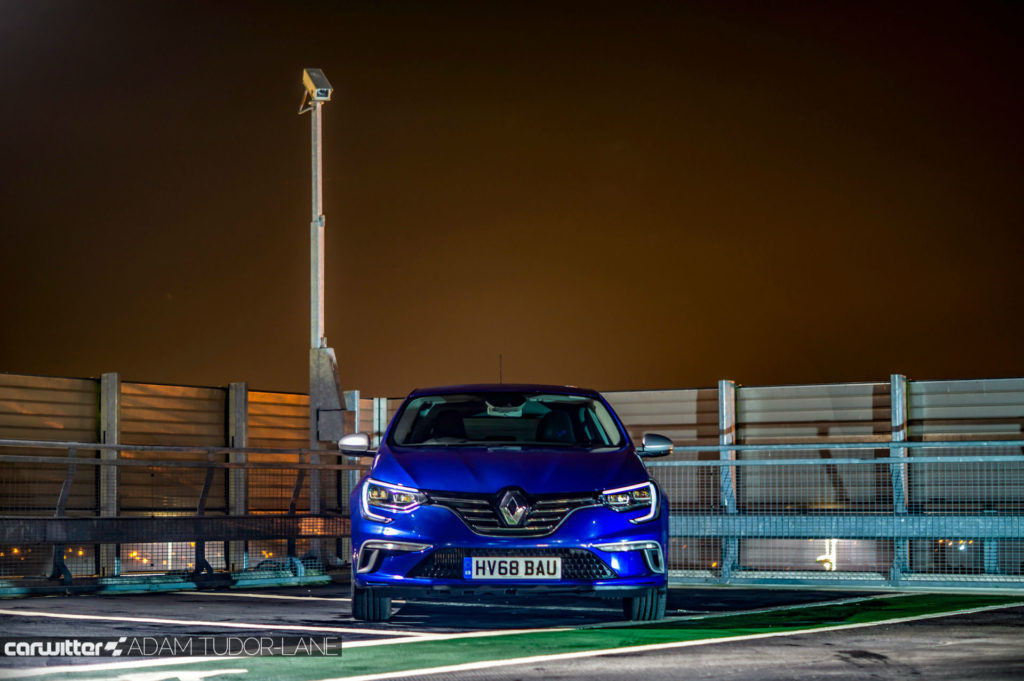 Although the current fourth gen Meg came out in 2016, it still looks fresh in its third year. A bold grille and large Renault badge feature up front, but what sets it apart so much from the competition is the light signature, both front and rear. The daytime running lights cut down into the bumper below the headlight; from the back, the Megane looks incredibly wide as the brake lamps eat their way into the middle of the boot.

GT Line adds larger 18-inch arch filling alloys, a sportier rear with a tasteful diffuser and minor changes to the front bumper, which include some faux air ducts by the lower indicators. A set of matte silver mirrors finish off the go faster looks.

It stands out from the current crop of reasonably bland, interchangeable hatchbacks from the Volkswagen Audi Group, it also looks far smarter than the likes of the Peugeot 308 and the Vauxhall Astra, but it’s less in your face and angular than the Honda Civic. A winning combo in our opinion. 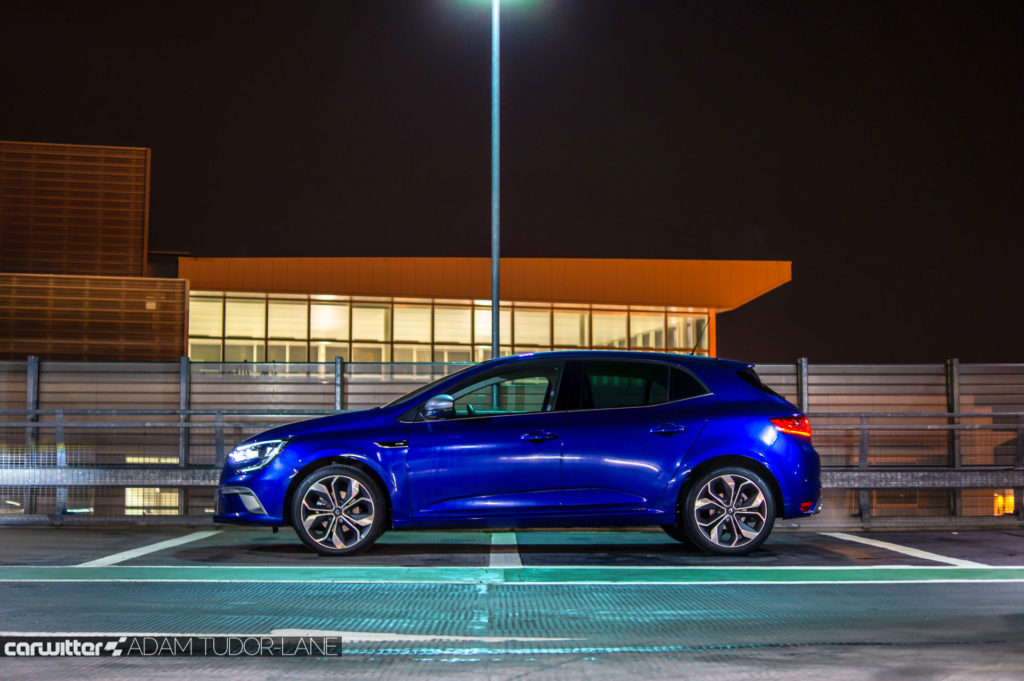 Now I had no idea what engine was in the Megane for the first two days; I thought it was something along the lines of a detuned 1.6 turbo; the one found in the RenaultSport Clio. The pace this thing picks up is pretty damn incredible, it feels nimble and sporty as the GT Line moniker suggests, even though the 0-62 time is 9.5 seconds.

Sitting under the bonnet is the fairly new 1.3-litre four-cylinder turbocharged petrol engine. It produces 140 HP and 240 Nm of torque, not bad for such a tiny displacement.
Usually, heavily turbo’d smaller engines are just a mess to drive, always having to be thrashed to get any sort of go out of them, while producing less torque than an arthritic geriatric on a treadmill.
Renault has hit the sweet spot with the TCe 140; it’s neither gutless nor needs the nuts revving off it to get you anywhere. 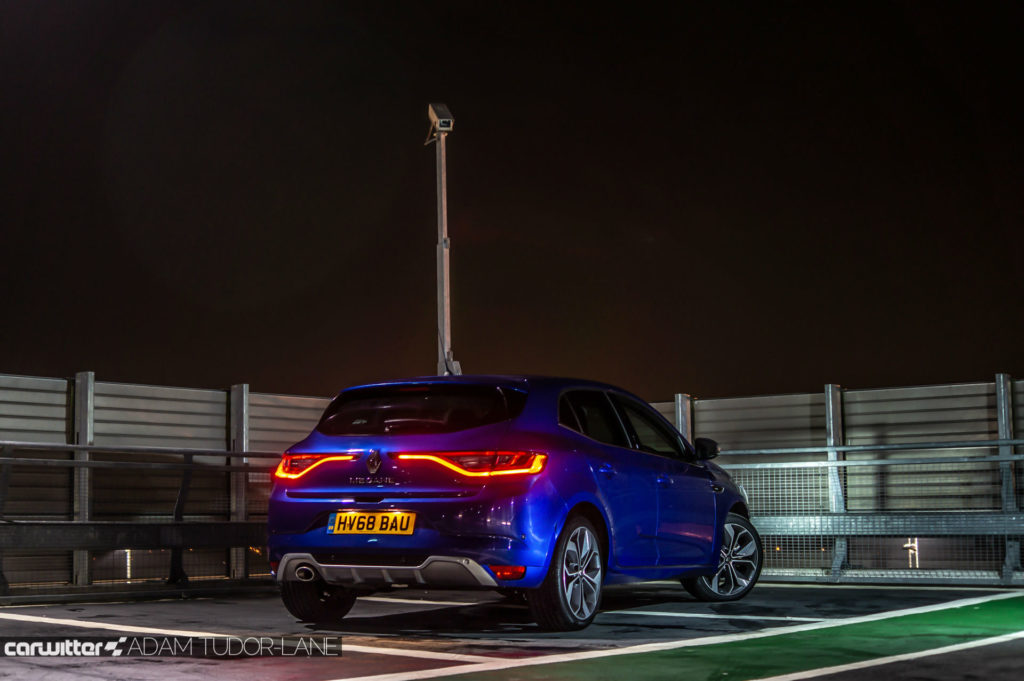 Ride is slightly firm in the GT Line, you’ll feel the lumps and bumps around town, but the stiffness pays dividends when you come to a section of sweeping tarmac, or your favourite B-road. Here the 140 horses and agile handling allow you to exploit the Megane’s prowess safely.
This is where a fairly mundane hatch comes together with the right amount of power, a slick gear change and a controlled body. It makes the Megane a fun thing to thread through corners, without being kill yourself quick. 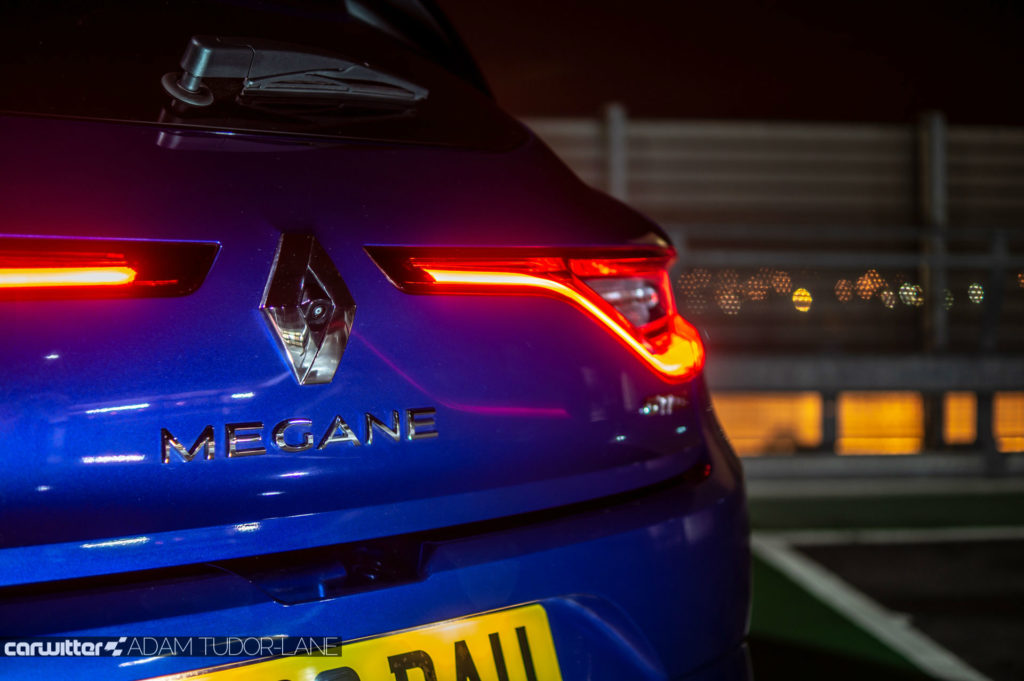 There are a few different driving modes you can cycle through. Eco holds you back and tells you to change gear earlier, all the dials turn green and you become a saintly driver. Comfort, and things go blue while steering gets lighter and then switching to Sport the dials turn red and you feel the car let go of the reigns, as if a limiter has been quickly whipped away. It also switches on the fake, synthesised engine noise that gets piped through the speakers, it doesn’t sound particularly great, but thankfully it can be fully turned off. 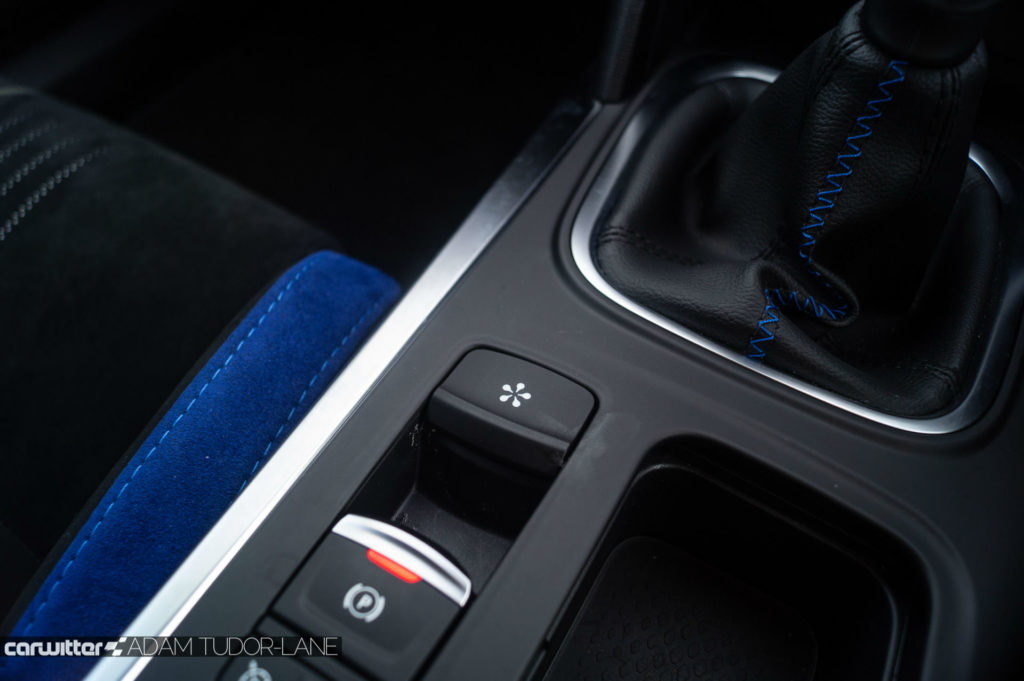 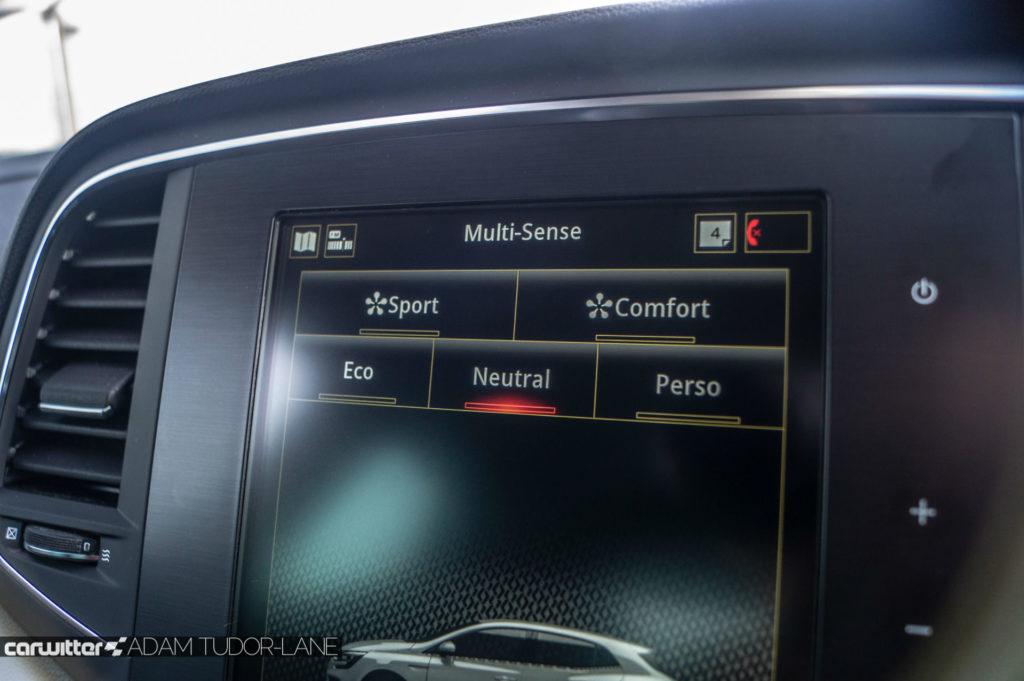 Over nearly 322 miles we averaged 36.7 MPG, these were mixed miles, motorway and around town with a few spirited drives thrown in between. 38-40 MPG should be achievable with ease. Renault rate Urban MPG at 42.2, sadly we were a fair way off that. The new NEDC combined rates it for 48.7 MPG. 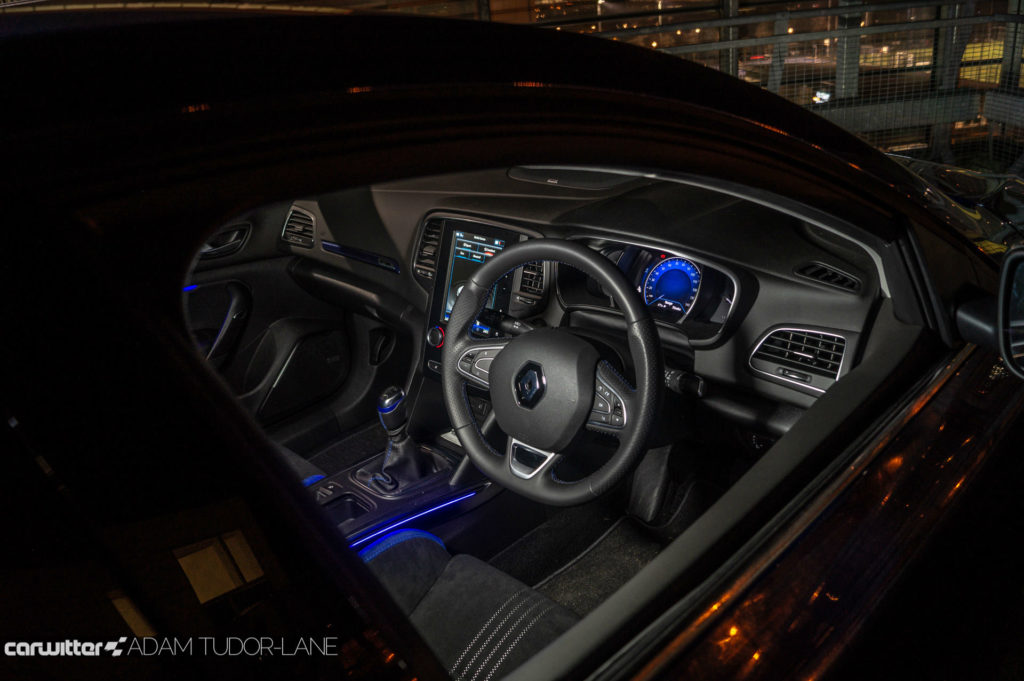 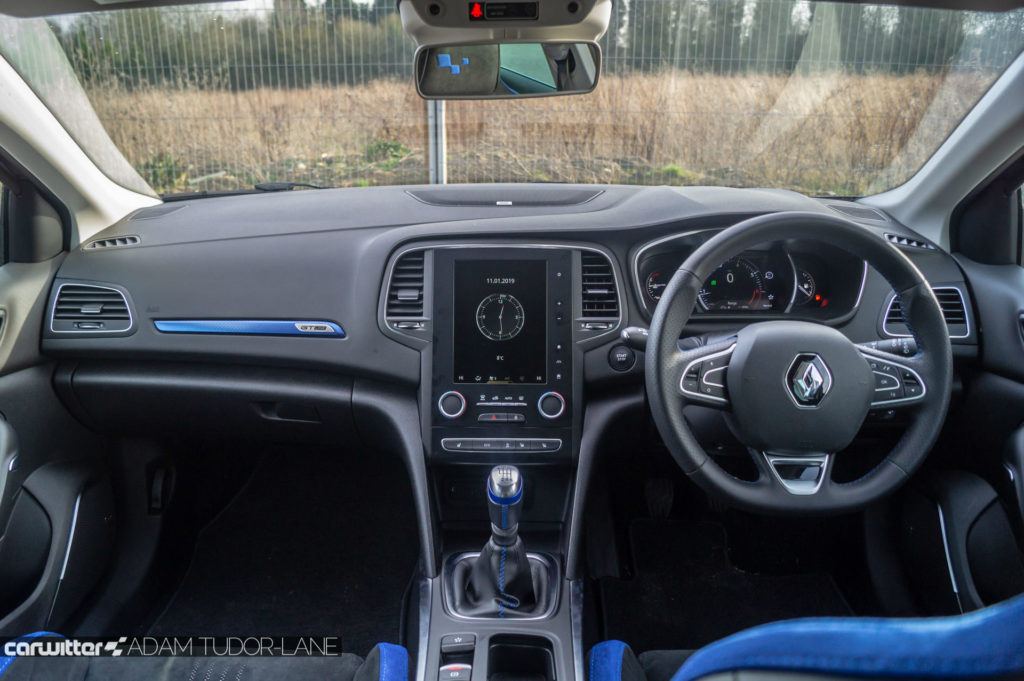 On the inside, the Megane is cleanly laid out, with a large central portrait style infotainment screen. Heating controls are thankfully still dial controlled, while a small row of buttons between and below allow you to control the rest of the heating with ease.

Menu’s on the infotainment screen can be a little on the fiddly side, taking numerous prods to get where you want to go. Merely adjusting the bass and treble is three menu’s deep, as is adjusting the screen brightness at night.

Dash plastics are decent; the top is all soft touch and nicely caressable. Lower down and to the left of the driver’s knee they become a little tougher, but the sea of black is mostly pleasant to feel.
Splashes of blue designate you’re in a GT Line, and the Alcantara trim on the sports seats help make things feel that bit more special, a worthy thousand notes spent there. 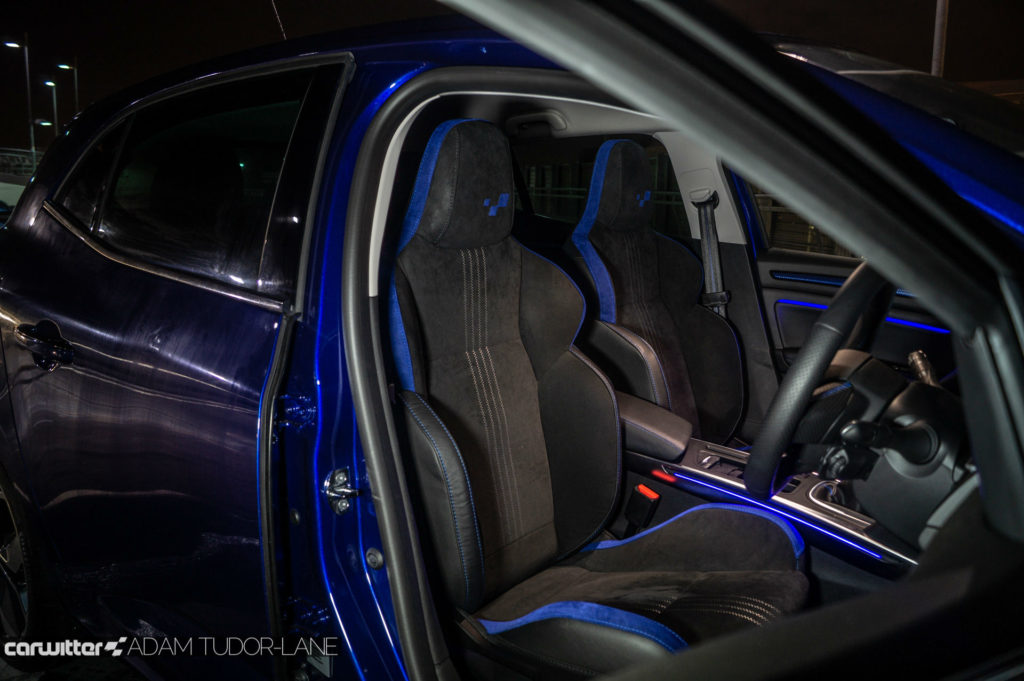 The upgraded Bose stereo, however, wasn’t much cop. It includes seven speakers and a subwoofer, but you wouldn’t know there is any sort of sub in the car at all. Even with the bass turned up full there were precious little vibrations to be felt. The sound, in general, felt a little flat. Save your £600, I’m sure the standard stereo is fine. 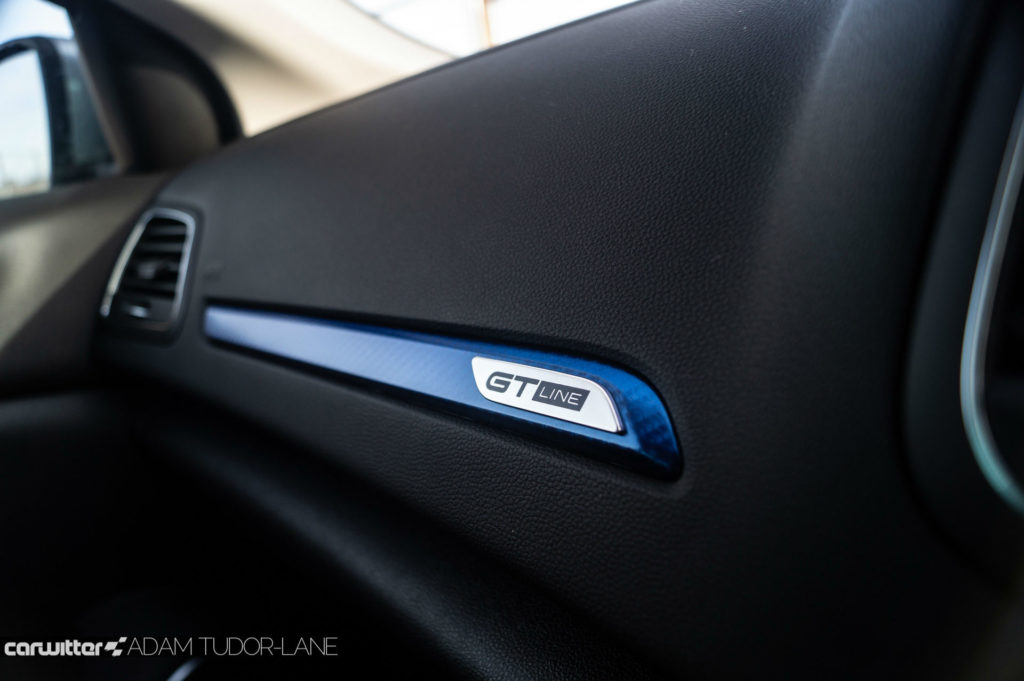 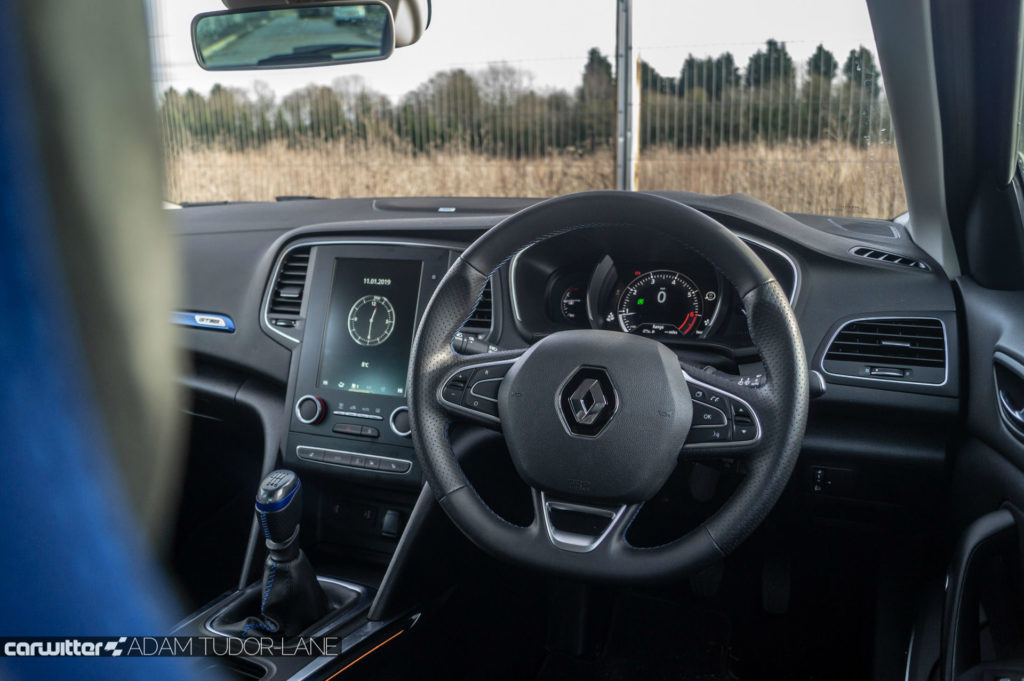 There are a few other choice packs to add, like the parking one this car had. That includes a 360-degree camera and parking assist, but even without any of these clip ons spec in the GT Line is superbly high.

Space in the back is a little on the tight side for an adult, a low hip point helps with headroom the best it can, but anyone nearing 6 foot will struggle to be comfy. Boot space measures in at 384 litres, four more than VW can muster and a whole 14 extra compared to what Vauxhall offer.
The boot lip is however rather deep, and there’s no split floor to help load and unload larger items without stooping. 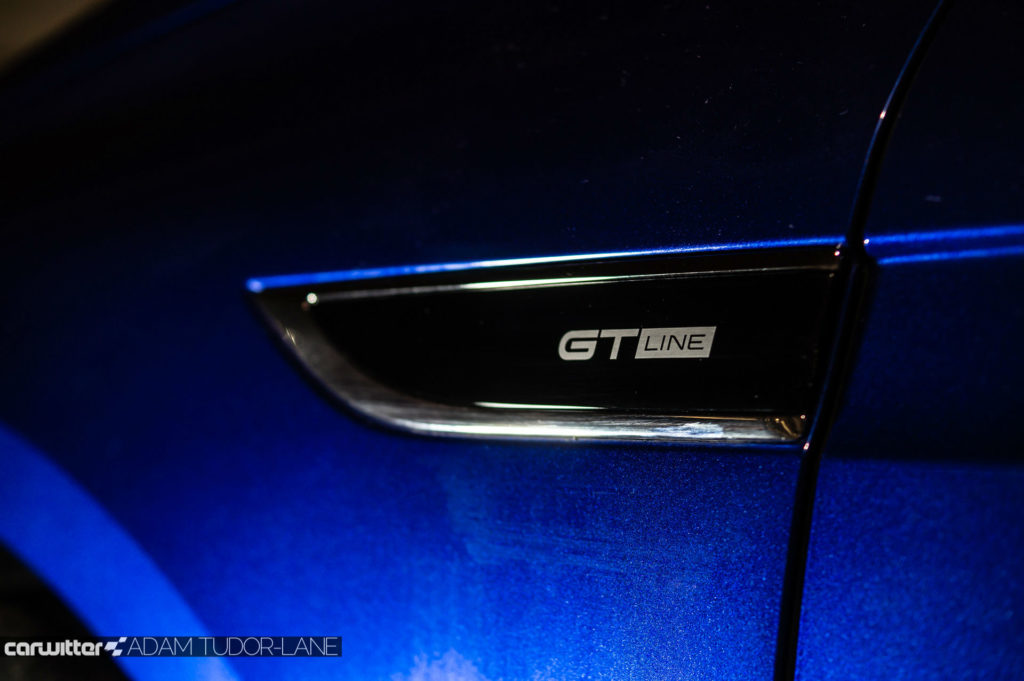 Overall the Renault Megane GT Line is a worthy competitor to the likes of the Volkswagen Golf, yet it comes in tips the bank balance at just £1,000 more than a poverty spec Golf fitted with a poultry 1.0-litre turbo engine making 85 horses.

If you’re in the market for a decent handling, punchy hatchback for the family and your commute you’d be mad not to take a test steer in a Renault Megane GT Line. 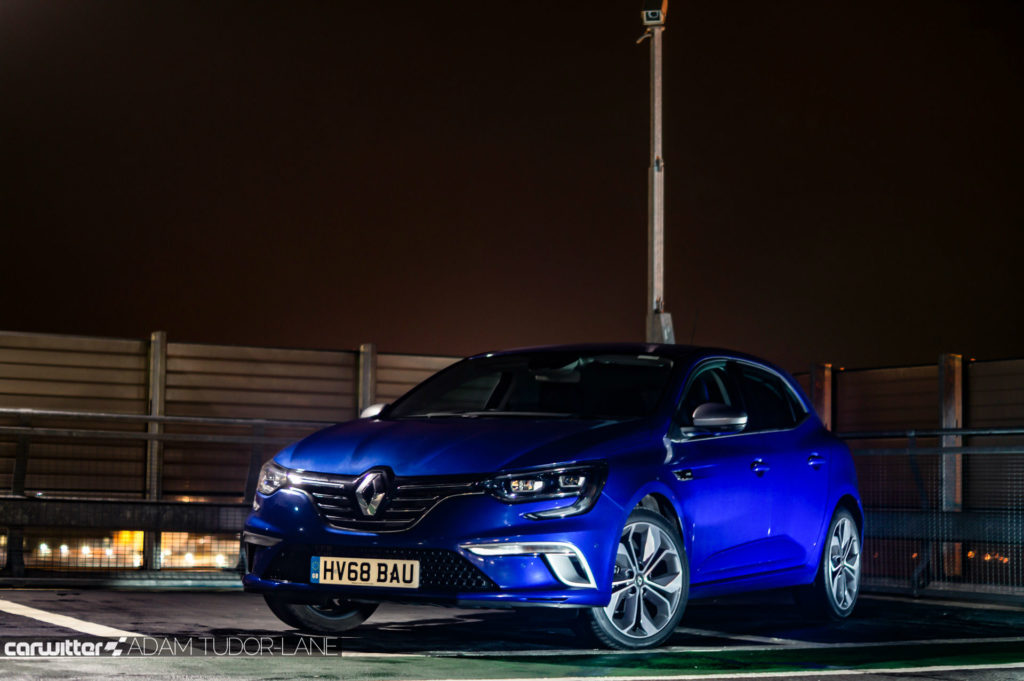 7 tips to select the perfect insurance type for your car