Renault Captur Review – The new kid on the block 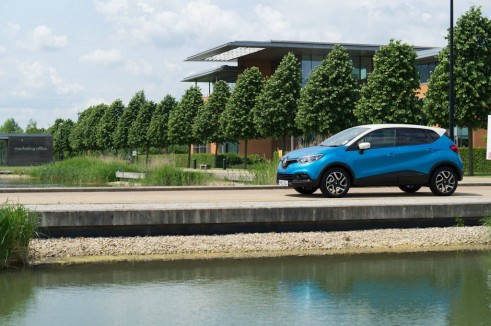 Renault have entered the B segment crossover market with the Captur, a stylish and customisable car directly competing against Nissan’s Juke. We tested the Dynamique MediNav spec, with a 1.2 litre Turbo TCe engine, and 6 speed automatic gearbox.  Our test car was priced at £17,195 but had been specced up to a rather pricey £18,390. The bulk of these optional extras was the Renault R-Link multimedia system at £450, the Tahoe Blue paintwork at £495, and the painted roof at £300. 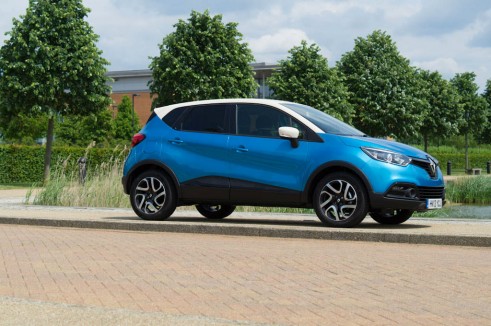 Once again Renault have done a superb job of the exterior. The first thing you notice is how chunky the Captur looks, prominent front and rear wheel arches bulge out from the sides of the car. Along the side the bottom trim kicks up into the rear door, making the side look more athletic and taught. The C pillar is so thin and small you almost miss it, as a rear quarter light nearly touches the edge of the boot. At the very back the whole design gets a lot more rounded and soft, but it still has this chunky look about it. I really like how the boot and rear wings have a lip to them, it’s really different and something you don’t see amongst the flush, fitted lines of modern cars. 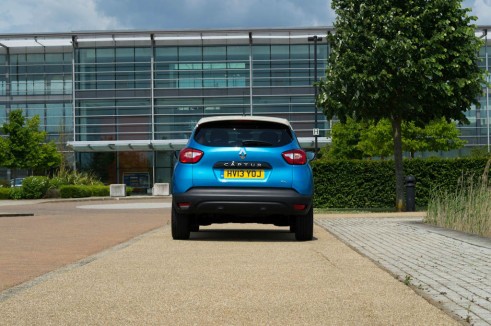 Renault’s two tone colour scheme is an optional extra, but it works really well. Especially when you see the ‘Manhattan’ hue collection, a black roof on a white body looks stunning! Our 17” ‘Black Ivory’ alloys where a £275 optional extra, but they do look the business against the Tahoe Blue paint. 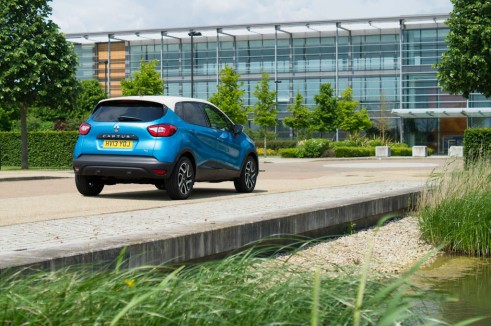 Being based on the Clio’s platform the Captur handles rather well. Even with the high ride height you don’t suffer too badly in the corners, it does have some body roll, but it’s all controlled and doesn’t get out of hand easily when you throw it about. Ride over bumps is good, not too firm, just comfortable. 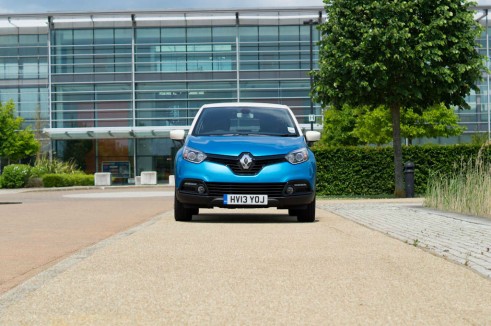 Steering is light which is perfect for around town, as you build speed it weights up nicely and still keeps its accuracy. 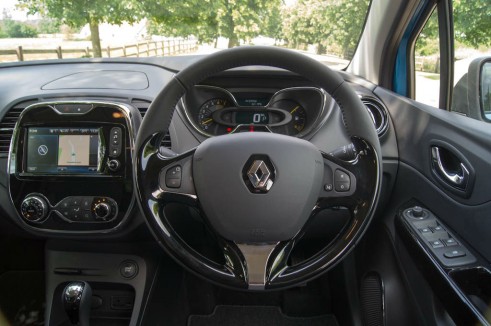 Once inside the Captur you are met with the Renault R-Link infotainment system, which we are big fans of. It’s very intuitive to use, and you can find everything you need without diving through tons of menus. Some notable extras on the Dynamique MediaNav are the hands free key card with push button start, upgraded 4×20 Watt speakers, and the Black/Chrome gloss detailing throughout.

Another really different feature on the Captur is the addition of zip off, washable seat covers. You can spec them as an optional extra on lower trim levels, but on Dynamique MediaNav it comes as standard; perfect if you have kids! 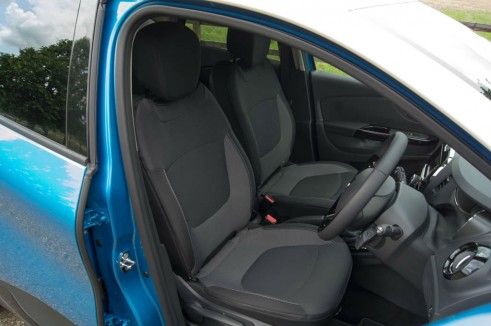 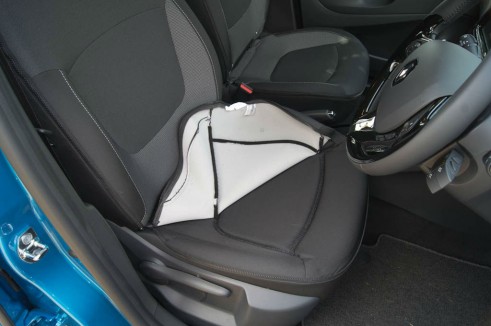 Dash plastics are nicely textured, with a perforated type diamond effect. Lower dash plastics are harder wearing but still have a nice finish to them. However the central trim is rather bland, and a little too plasticy for our liking. The same goes for the front seat backs and rear door cards, whilst it may be hard wearing they just look cheap and nasty. We also aren’t sure why Renault went for bungee type cords on the backs of the seats, instead of actual netting, which would have been far more practical and better looking. 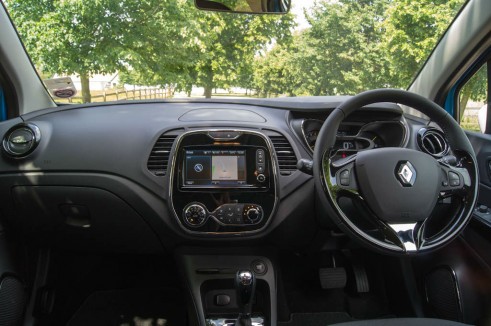 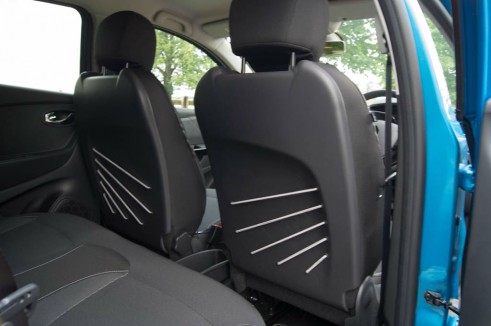 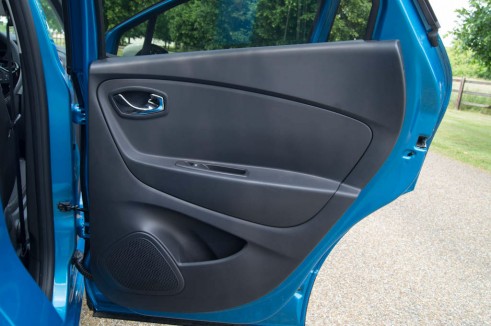 Rear seat leg, and head room is rather cramped. It would be fine for children, but adults nearing 6 foot would struggle. The rear seat bench slides forward to give you a 455 litre boot capacity, with the seats in their normal place you still get a plentiful 377 litres. 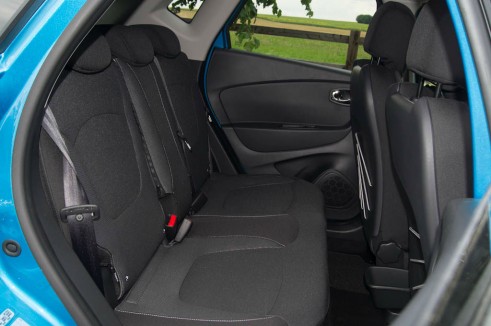 A very clever feature is the removal boot floor, with it in you get a nice flat load space but it can be taken out to gain extra depth. You can also tilt it at an angle to be used as a divider, or if you have something mucky to go in the boot you can turn it over to reveal a rugged hard plastic surface. 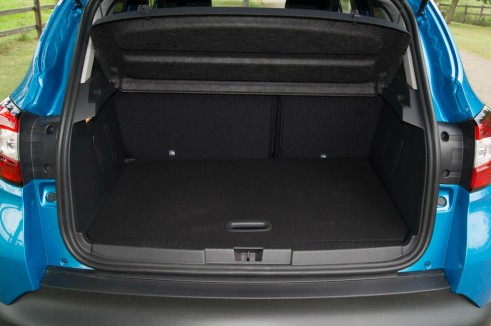 Captur is all about customisation and being individual, and with 3 pre made ‘Collections’, consisting of 24 colour ways it certainly does that well. That’s without the Decal designs, or the exterior Gloss Packs! But customisation costs on all but the top trim level, all the paints (except Boston Blue) are a £495 extra, roof colour is another £300 on top, this puts a heavy premium on individuality.

Renault have gone back to days of old, and come up with some genuinely useful ideas on the Captur, things like the reversible boot floor and washable seat covers are things you simply won’t find anywhere else. It’s a shame that the car is let down somewhat by poor quality interior plastics, but we think the Captur will be a success on looks alone, get ready to see a lot of these on the road! 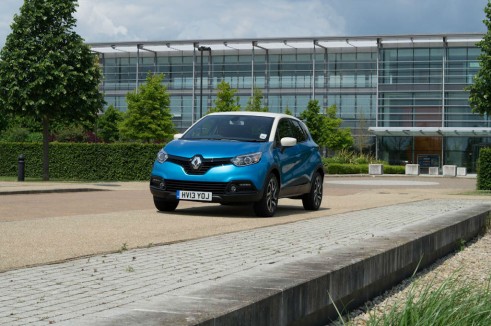