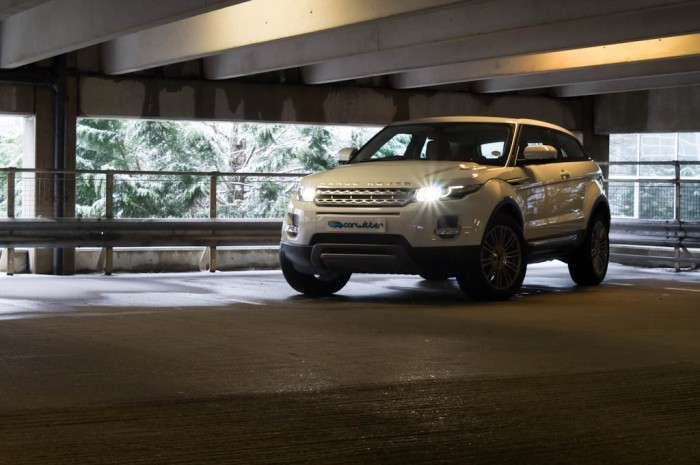 Land Rover released the Evoque back in 2011 as a Coupé four wheel drive, but seeing as many of them are rarely used off road, how does the Evoque perform on road?

We tested the SD4 2.2 litre Diesel with 187 BHP, in Prestige spec. With a starting price of £40,995 it sits in the middle of the Evoque range. Ours was kitted out with nearly £6,000 worth of optional extras though, bringing the total to a whopping £47k. 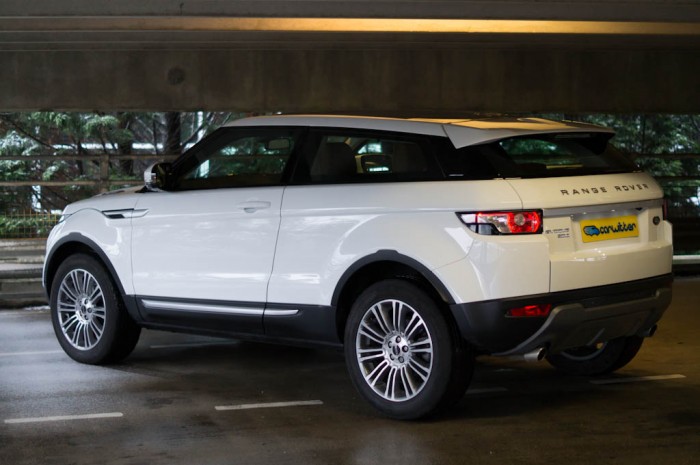 When I first saw the Land Rover LRX concept way back in 2008 I thought, and even said “They will never make that, it’s too futuristic”. Yet 5 years later it’s sitting on my drive. The car we are driving is nearly an exact carbon copy of the LRX, the only major external changes are the door mirrors.

There is nothing like it on the road, its angular floating roof and wide chunky stance set it apart from any other 4×4. Land Rover also make a 5 door Evoque, however I think the three door Coupé model is the better looking of the two, it’s a lot neater and in proportion.

Land Rover have even kept the unique daytime running lights from the LRX, along with the afterburner style LED brake lights. The exterior is just stunning all round. 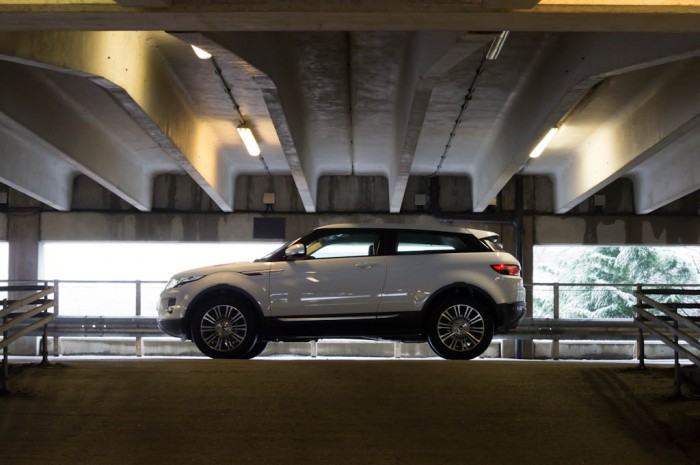 Most 4×4’s are rarely actually used off road, and with the Evoque this has got to be even less likely. It’s a car for the city, you buy a Freelander, or a Discovery if you want to go off roading….not an Evoque. So with that in mind, we used it for city driving only.

With 187BHP, coupled with a massive 420Nm of torque the SD4 engine was plenty powerful. Acceleration was quick enough, whilst overtaking was a breeze. The thing I love most about the Evoque though is its handling, and being loosely based on the Freelander platform makes it even more incredible. Through turns and corners the baby Range feels very much like a normal saloon, no wallowing body roll, just a remarkably flat setup. The steering is well balanced, slow to initially turn but then quickens as you add more lock, it’s a nice feeling, especially around town where minimal effort is needed. 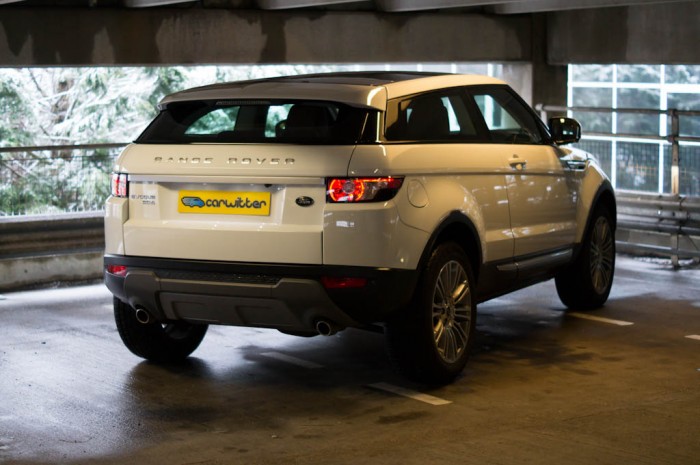 You can just about hear the grunt of the Diesel under hard acceleration, it’s very refined inside. Getting toward 70MPH you start to hear a fair bit of road noise, but this is most likely due to the fact our car had 19” alloys shod with chunky tyres.

One thing to gripe about around town is the sluggishness of the gearbox when it’s left in its normal state. You see a gap at a junction or at a roundabout, put your foot to the floor and not a great deal happens. After what seems like an age, with a car approaching you the Evoque springs into life and you shoot away. Luckily all this can be avoided by putting the gearbox into Sport mode, something I found myself doing whenever a bit more gusto was needed.

Being a 4WD the Evoque has many different modes, Grass/Gravel/Snow; Mud Ruts; and Sand. Now I can’t see you ever needing any of those in your normal driving routine, especially not in this model of Range Rover.

When selecting Dynamic mode the MagneRide dampers set the car up to have “tighter body control, with flatter handling and sharper responses” and this does work rather well. That is, until you hit a section of slightly undulating road. Then you are sent bouncing up and down in your seat, like on a bucking bronco. It’s not the cars fault entirely…..as it works great on perfectly flat, smooth sections of dual carriageway, but anywhere else and it just makes the ride rather bumpy. For the most part we left the Terrain Response system in neutral, “General Driving” mode; the ride was then brilliantly smooth. 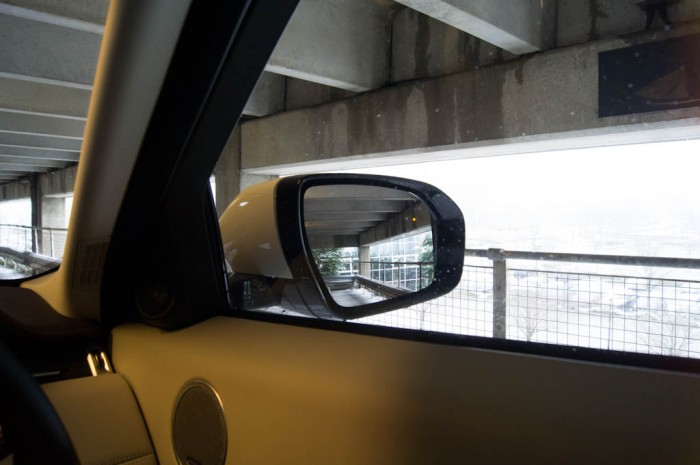 I found the door mirrors to be a bit of a hindrance too, when approaching roundabouts or junctions you can easily lose cars behind them, they are massive. You have to get up out of the seat and really move around to make sure nothing is hiding. The LRX concept had thin, elongated mirrors which would have worked better. 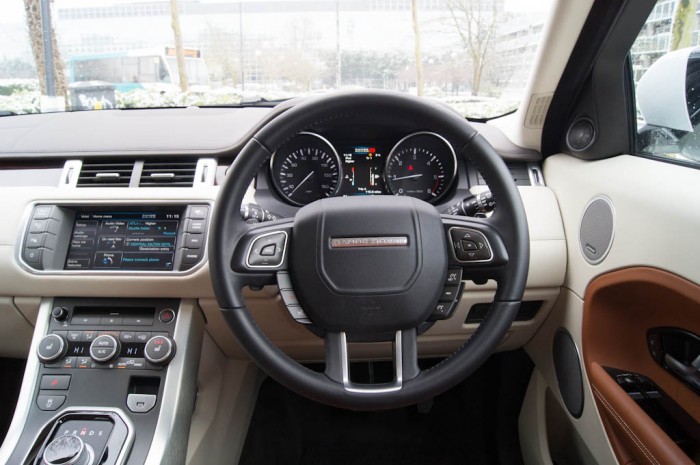 As part of the £4,425 Lux pack fitted to our car, we had toys such as Analogue/Digital TV, 8” Dual View touch screen display, powered tailgate, panoramic roof and a surround camera system. But by far the best extra of the Lux pack was the 825 Watt Meridian surround sound system, with no less than 16 speakers and a subwoofer. The sound is just superb, rich and bassy but crystal clear even at insane volumes. You can even set the system up in Dolby Pro Logic and DTS modes, that’s cinema grade audio! 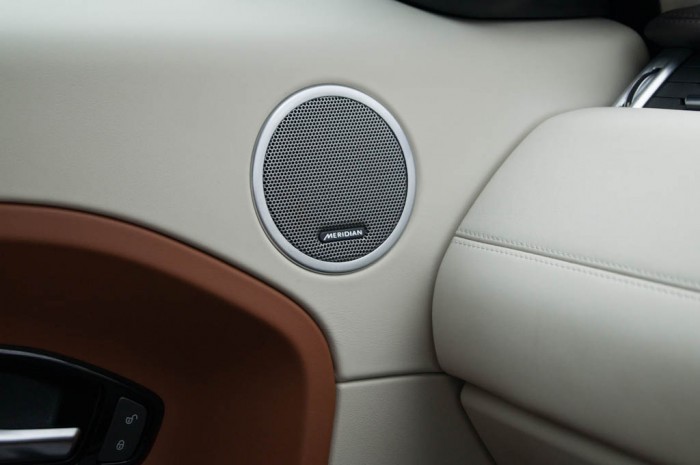 Inside our Evoque was swathed in tan and cream upholstery, not to everyone’s taste but it really grew on me. It definitely gave the car a more premium feel than just plain black, but there are up to sixteen tailored interiors you can choose from. Some of the upper door plastics feel a little hard, a bit of padded leather wouldn’t have gone a miss. 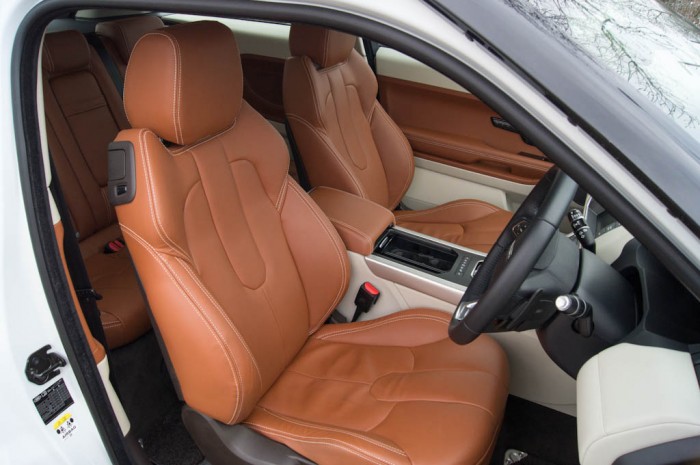 Switches are kept to a minimum, with all the controls being laid out clearly in a clutter free manor. When you engage Dynamic mode the dials and interior mood lighting change to red, it’s a very cool touch. 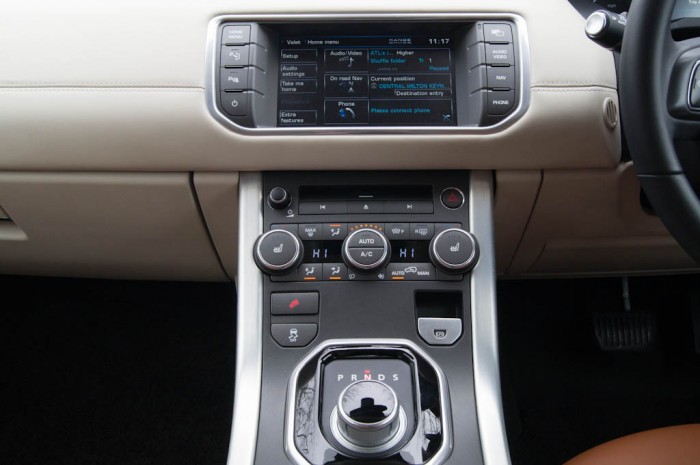 Being a 2 door doesn’t mean the rear occupants suffer too much, there is still a good amount of leg and head room for normal sized adults. Having the glass panoramic sunroof also makes the rear feel more spacious and open. Getting in the back is a little bit of a struggle as the seats only move forward so far, but if you want ease of access you would buy the 5 door. 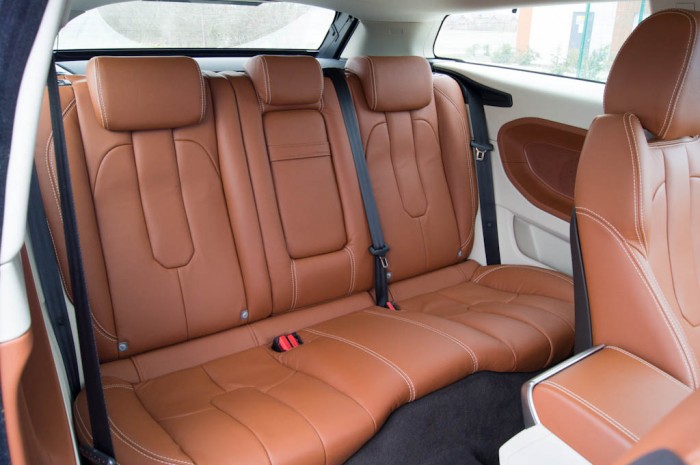 Boot space is ample, and at 550 litres its easily comparable to most saloons. 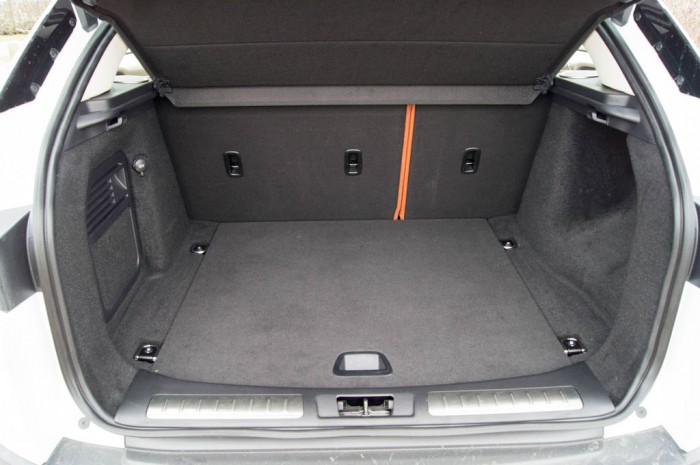 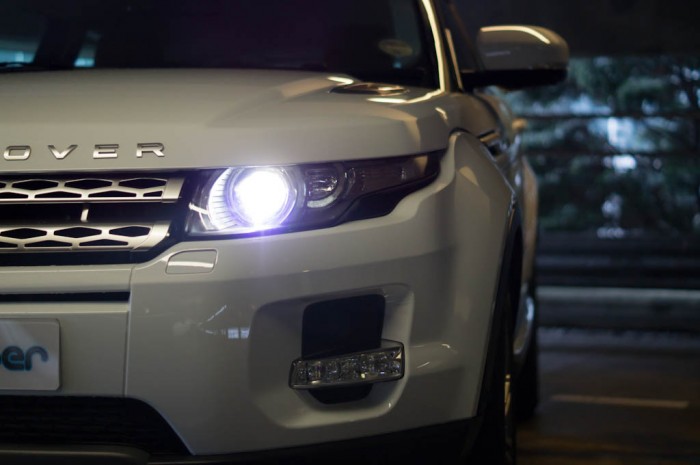 After over 300 miles of driving, around towns, and along A roads I can safely say the Evoque is a great on roader. Perfectly comfortable for long journeys, with enough luxury and stunning looks to make you feel that little bit special. Around town the higher driving position is great, with smooth, nicely weighted steering. It’s a dream.

If I was to buy one though I know it would never go off road, so I would opt for the 2 wheel drive. It does have 40 less BHP but it will be more economical and cheaper in the long run. Land Rover claim the 2.2 SD4 will achieve 35.8MPG under urban driving conditions, however our model only managed to achieve 25MPG over 300 miles. Half of this was around town, typical stop start driving and short journeys, the other 150 were at dual carriageway speeds, so you can see the always on 4WD dents your MPG quite badly.

You can get a 2WD Pure Tech with decent extras, like tinted windows, fog lights, and the Meridian stereo for £35k, now that’s a bargain, and its perfectly set up for on road driving. 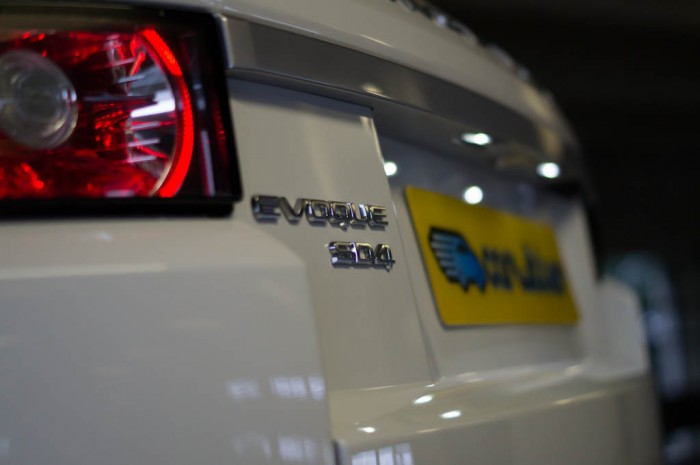