When Landy announced the drop top Evoque it instantly turned to marmite. Some will love it, some will loathe it.

Seldom do convertible SUV’s work, ahem Nissan Murano CrossCarbiolet…but I think the Evoque has been a success story.

It doesn’t look ungainly in its appearance, and that’s what drew us to having one on loan. They look almost custom, a chop shop job that’s a one off.

Our test car came in HSE Dynamic trim with £3k worth of options, including the black pack and lunar/ice leather interior, the total price – £50,610.

Granted, they appeal to bleached blondes in ripped jeans, tottering around in heels with dogs in their handbag. They will never go off road and are more at home sitting outside the house of Joey Essex.

We aimed to change this.

We went off road. A lot. 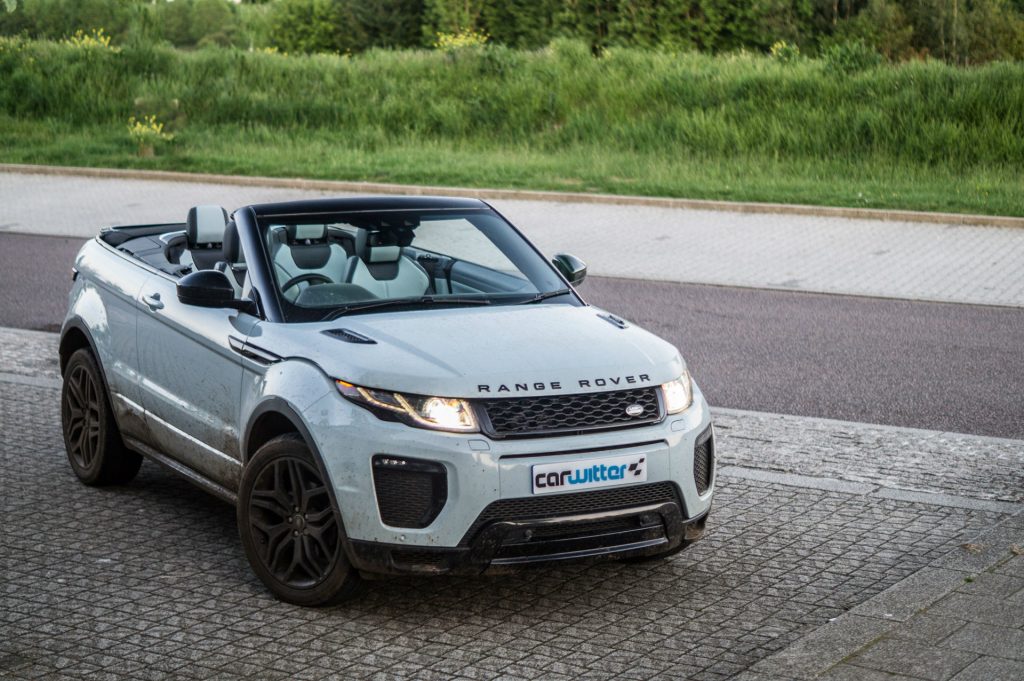 We can’t convince you, you’ve already made your decision. You love it. Or you hate it.

One thing you can’t argue with is that the Evoque convertible is totally unique. There’s no other topless SUV on today’s market.

And with the proliferation of the Evoque not looking to slow any time soon, you’re gonna see more of them that’s for sure. 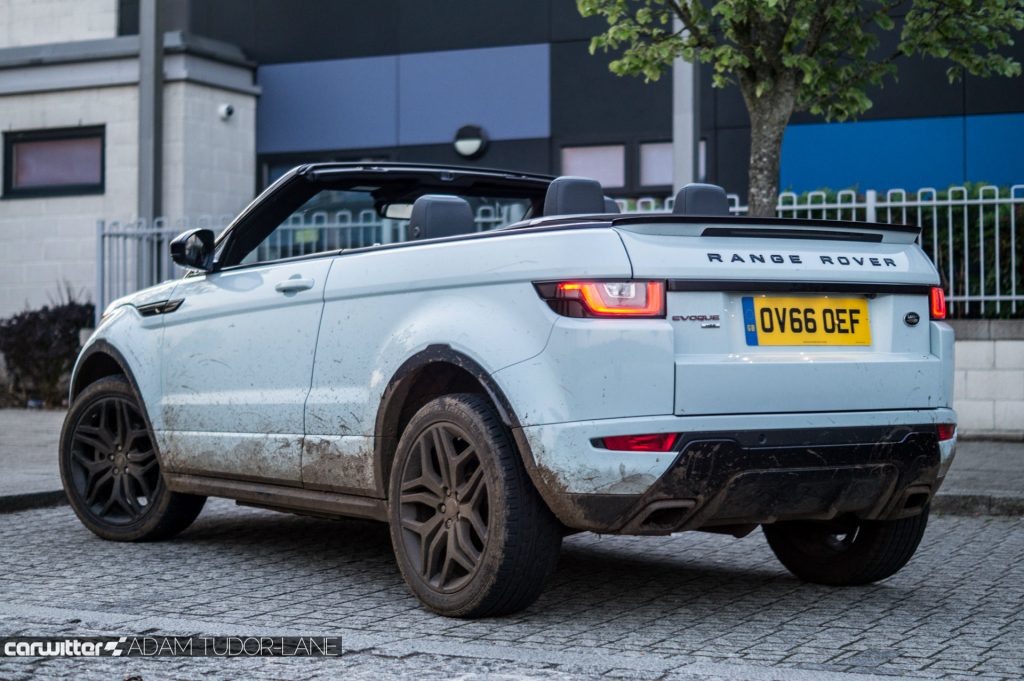 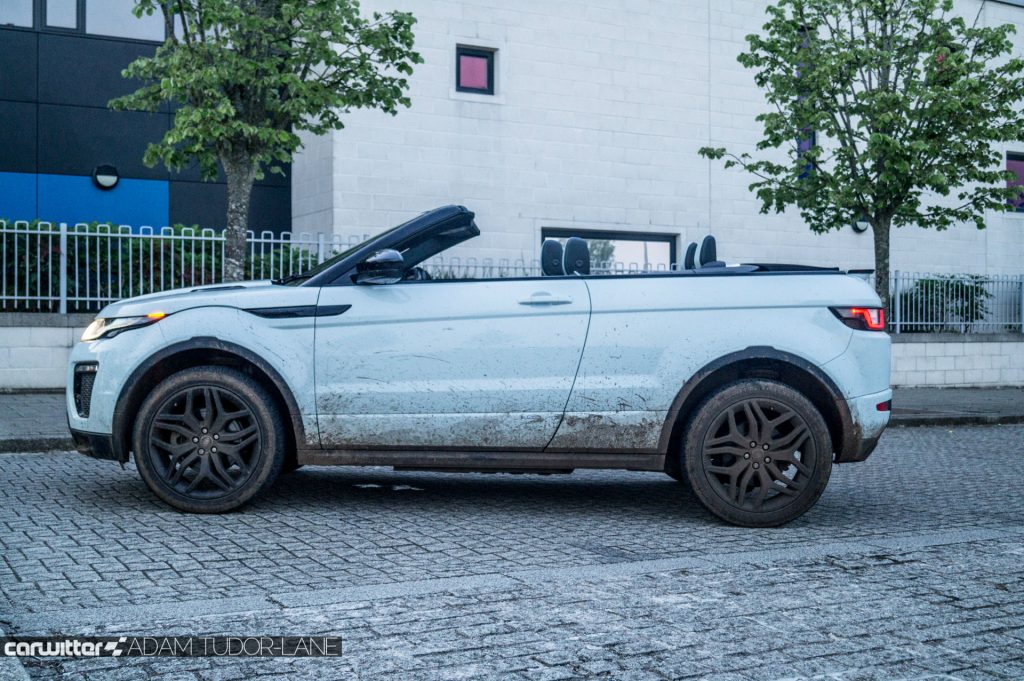 Yup, it looks great around town with the roof down. A tarts dream.

But what about going off road? It’s an off roader after all, and we’ve taken the Evoque off road before. Heading to our nearest hardcore green lane we held our breath. 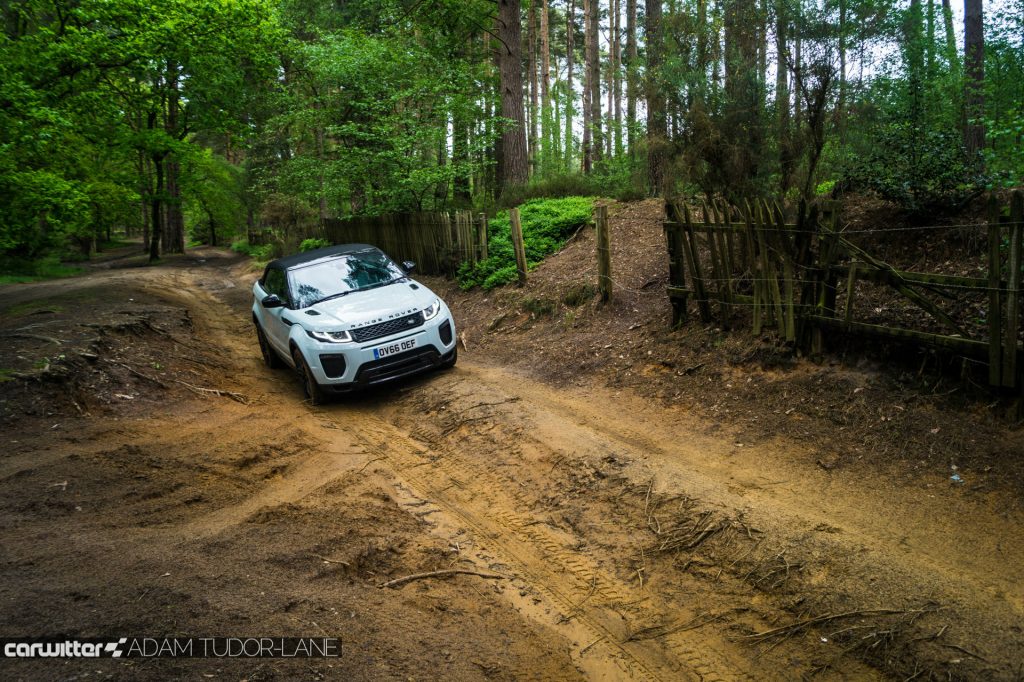 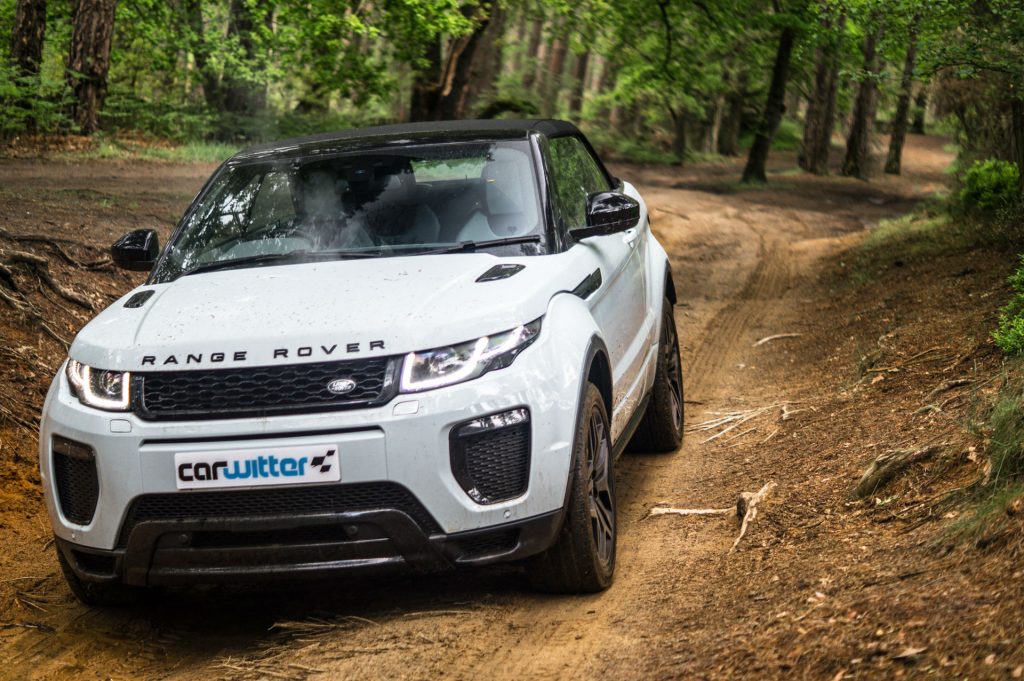 Switching up into Sand/Grass mode we tackled the first challenge. Deeply rutted sand on a steep embankment, roof down. Naturally.

Now, with losing 80% of its solid metal roof, rigidity is obviously affected. You’ll get the occasional creek from around the scuttle area, which is met with some shake when back on normal roads at higher speed. Hitting a pothole will give everything a little wobble, but it’s to be expected when you’re missing everything but the windscreen. 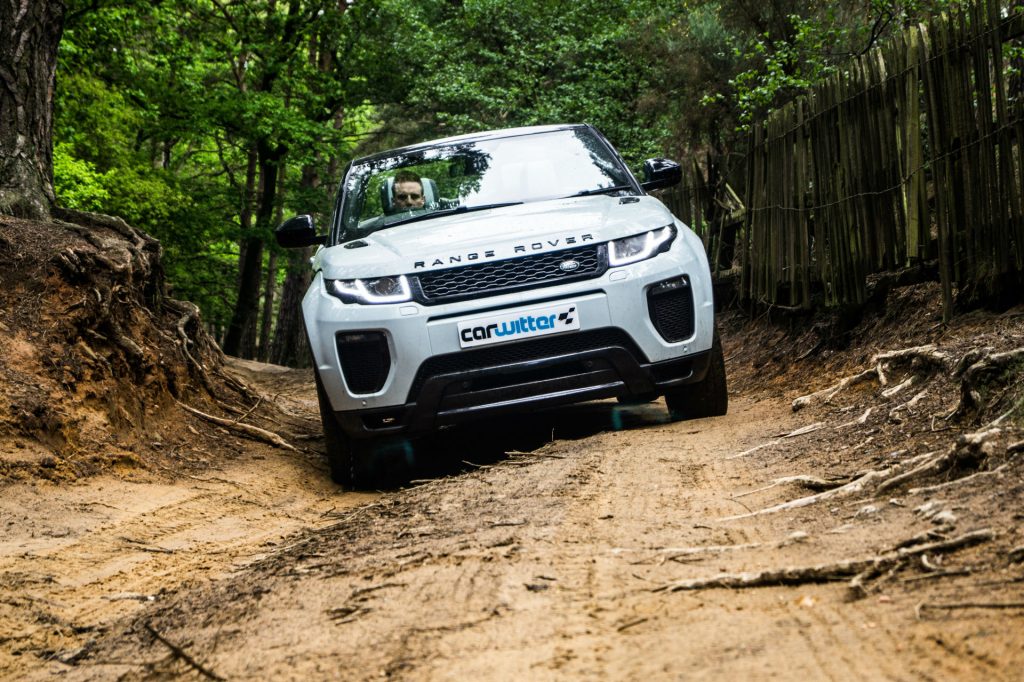 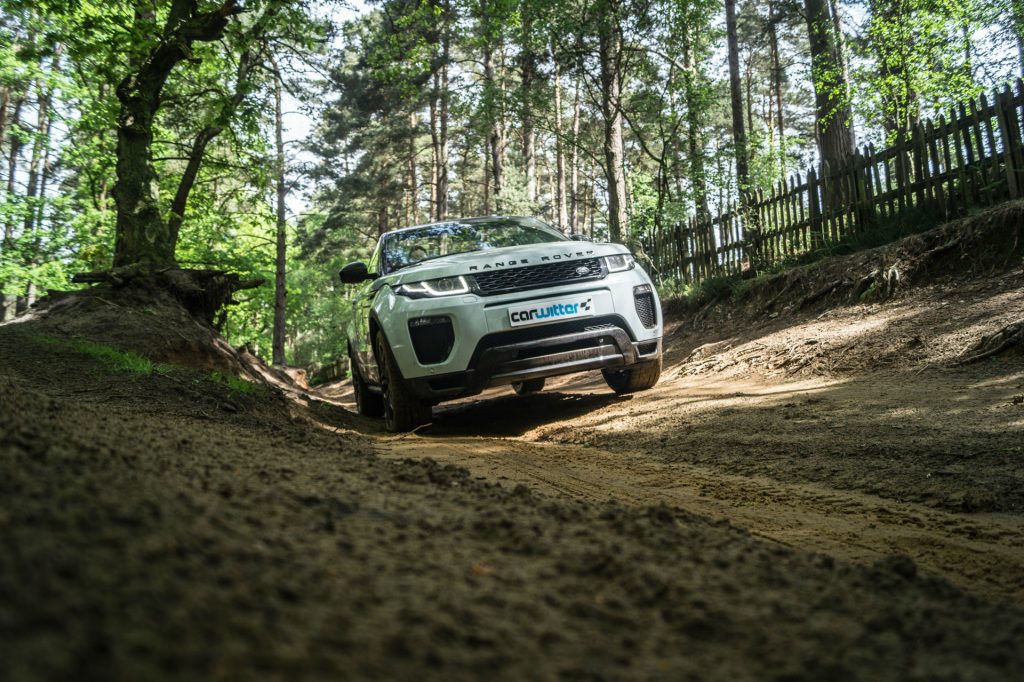 And that’s another thing, this Evoque weighs a smidge over two tonnes. Two. Tonnes. In fact, it’s the same weight as a Rolls Royce Silver Cloud. You can thank all the extra strengthening due to the omission of the roof for that one.

The extra heft doesn’t cause a problem, the sand was traversed without issue. Next up some rather sloppy looking mud ruts. We get a little bit of sideways slip going on, but there’s no hold up in the cabrio’s progress.

Approaching what looks to be a deep trough I ponder the Evoques wading abilities.

Seeing a second gen Freelander go though I was reassured we weren’t going float away, and that muddy water wouldn’t pour over the sides of the doors.

Taking a deep breath, we slowly enter…giving it a bit of throttle to create a nice bow wave the water laps up over the edge of the bonnet. Breaking just before the air vents up top.

Coming out the other side water pours out from around the headlights, down through the wheel arches and back into the earth.

We trundle on through the woods, hitting a few ruts, and dips before swinging round for another stab at the lane.

This time we took a smaller water dip. Stopping whilst in it, water just below the door line. Setting off again from stationary the back wheels work hard, scrabbling for grip on the incline. Slow and steady wins the race, and the Evoque pulled us clear without issue.

We pass a guy in a classic Series 2. He loves the cabrio.

After a good nose around and compliments exchanged on each other’s chariots, we set off for the sand once more.

Slipping slightly on the incline with the now wet tyres the Evoque holds on. Pausing for some pictures we get a few strange looks from mountain bikers shooting past in the trees next to us.

Off-roading completed, we turn straight back onto solid tarmac and head off to the next green lane in a flurry of mud and sand. 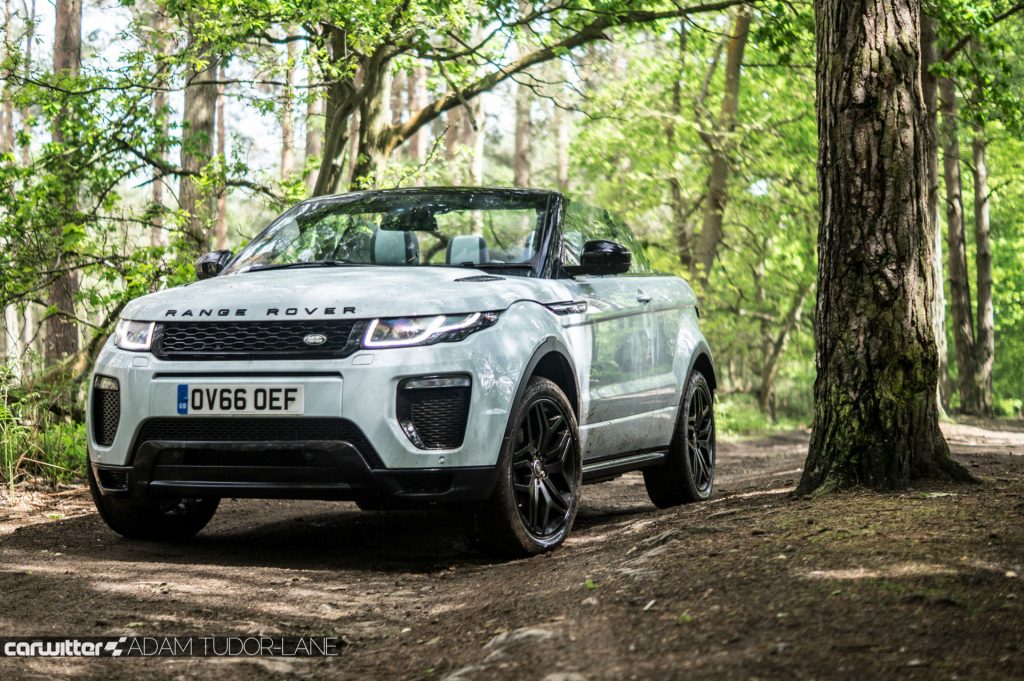 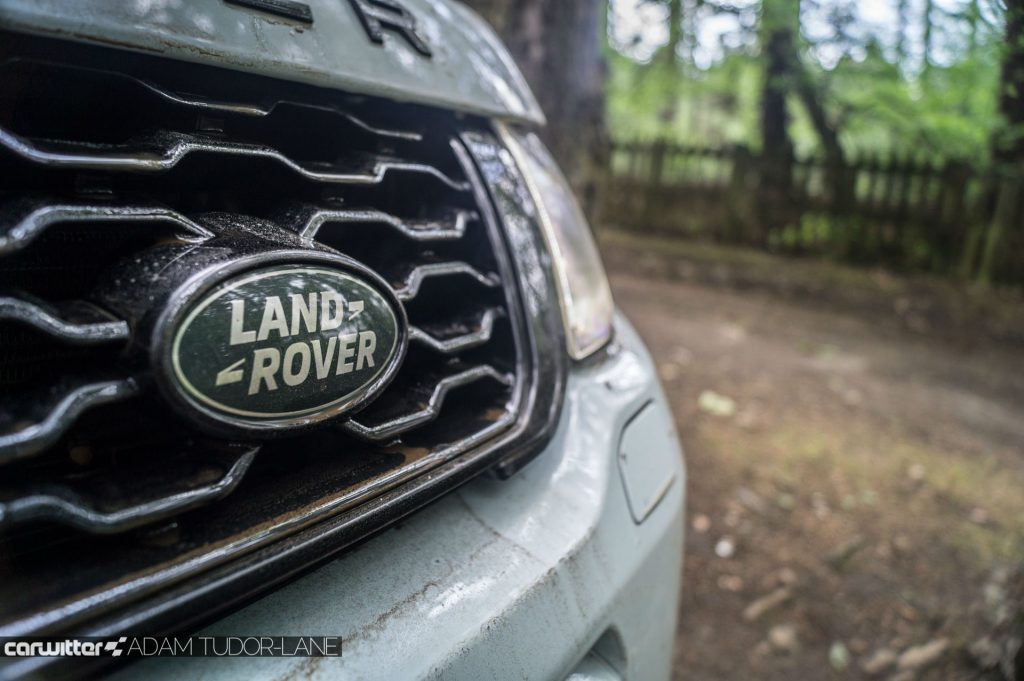 The next venue isn’t half as exciting. A simple jaunt through the edge of a forest.

It’s all flat apart from some deeply muddied ruts at the end. But what’s most enjoyable about this run is the open air, at one with nature feel that no other 4×4 can offer.

Ducking branches, having birds fly out of the undergrowth beside you, the pollen falling from the trees. It makes off-roading so much more of an adventure.

After those trials, we spent the rest of the week trundling up and down A roads and motorways. Evoque still caked in mud. It certainly got some looks.

And so it should, who else has ever seen a convertible Evoque utterly covered in mud. 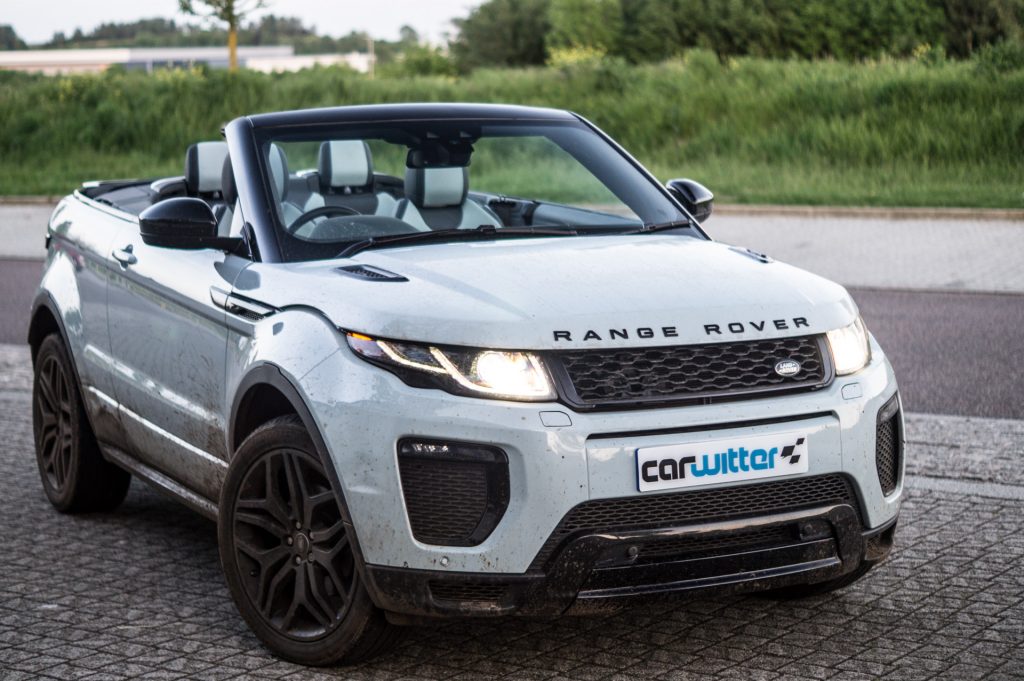 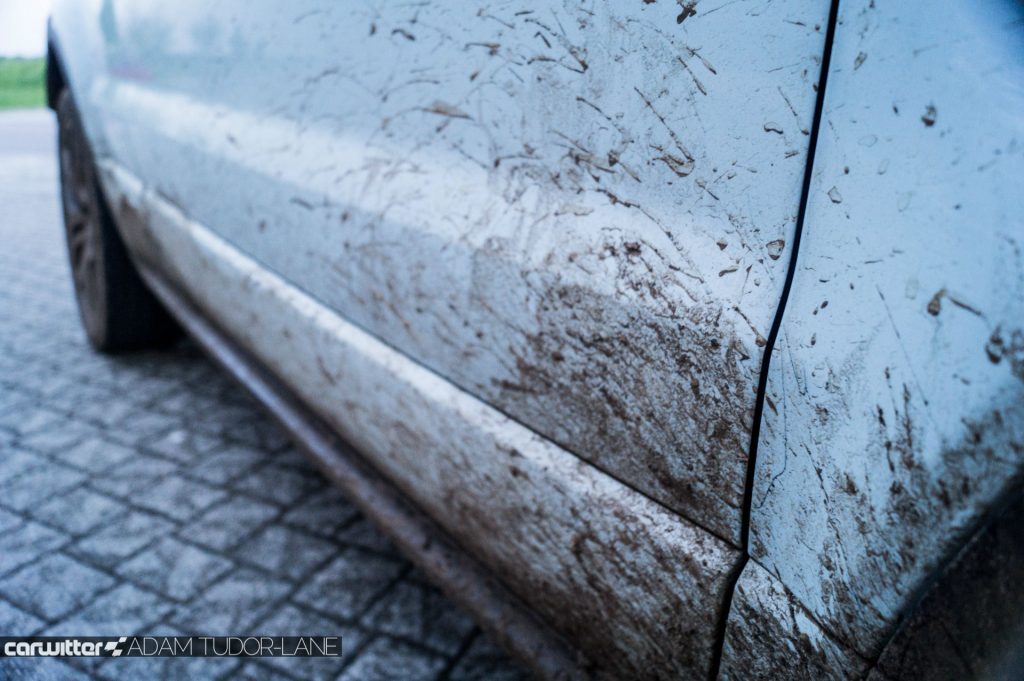 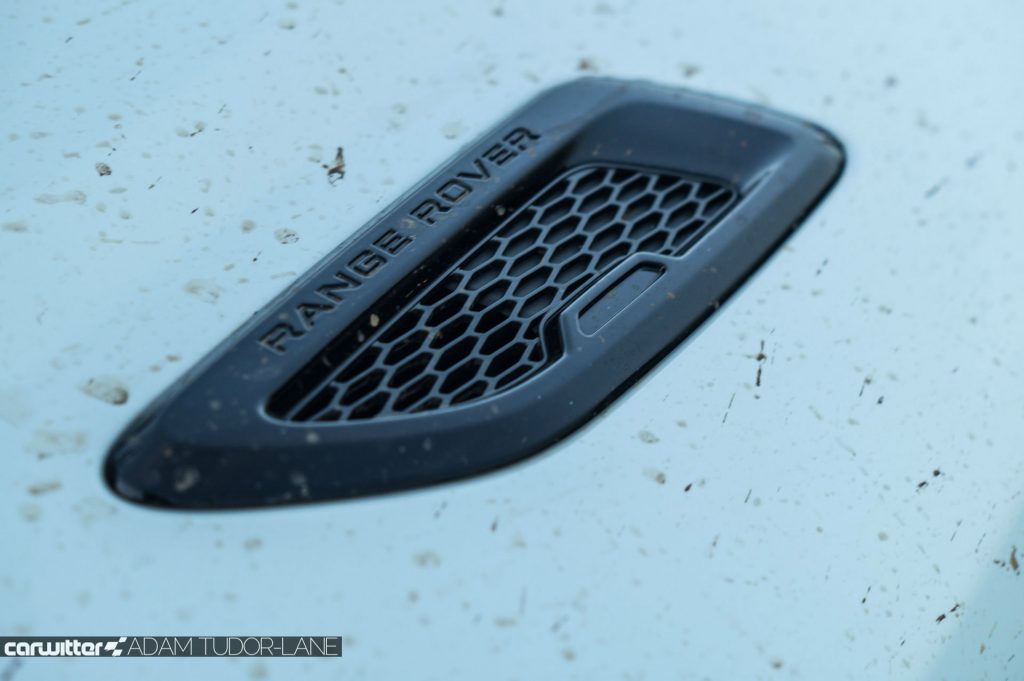 Here’s part of the off roading adventure, including the water splashes.

Boot space is rather hampered by the drop top. You end up with a small, low slot that you have to duck down to see into its depths.

Measuring in at just 251 litres, as opposed to 420 in the normal coupe. That’s still enough for a few weekend bags, but expect to use the back seats to their fullest. 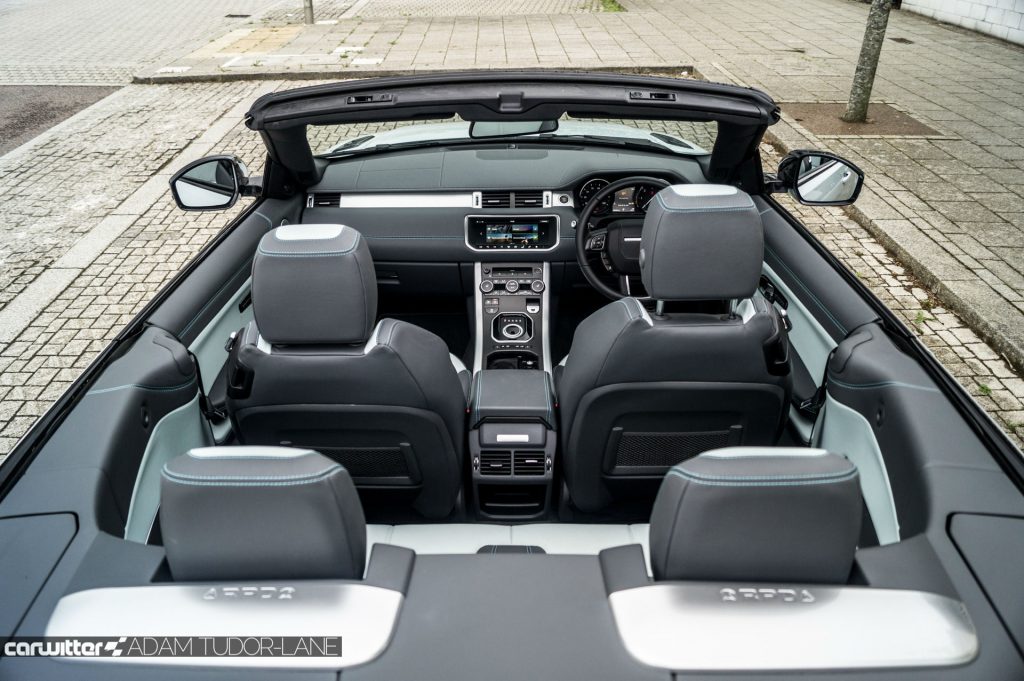 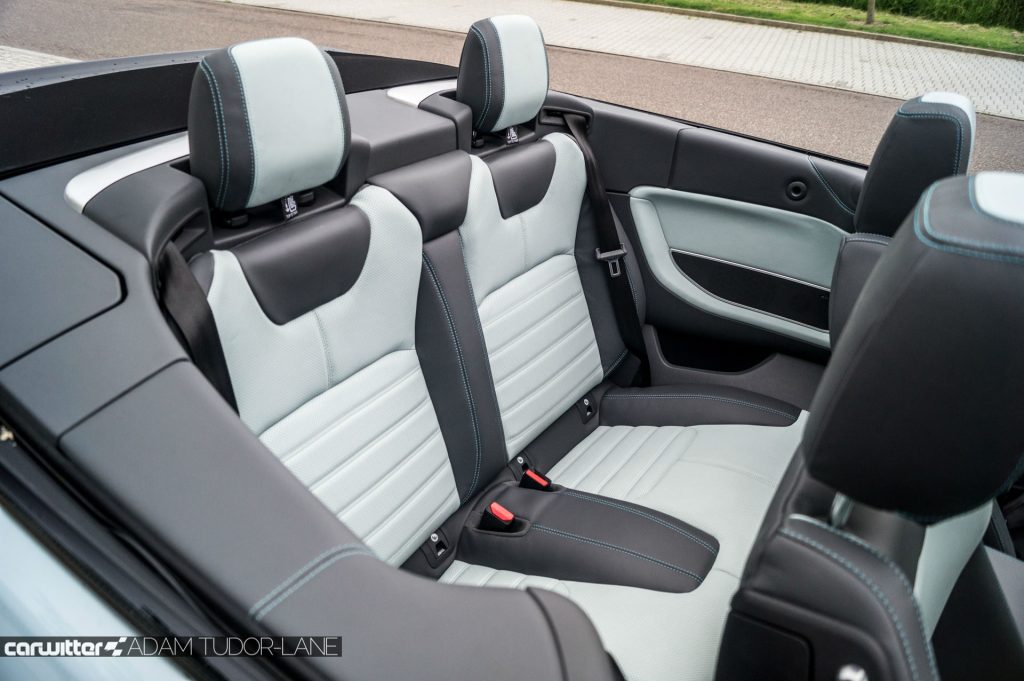 Rear seat legroom is tight, it’s a three door after all. Perfectly fine for short journeys, but expect most adults to be a little cramped.

Up front everything is suitably premium. The gorgeous Lunar/Ice Oxford leather matched the exterior, with some lovely light blue stitching. 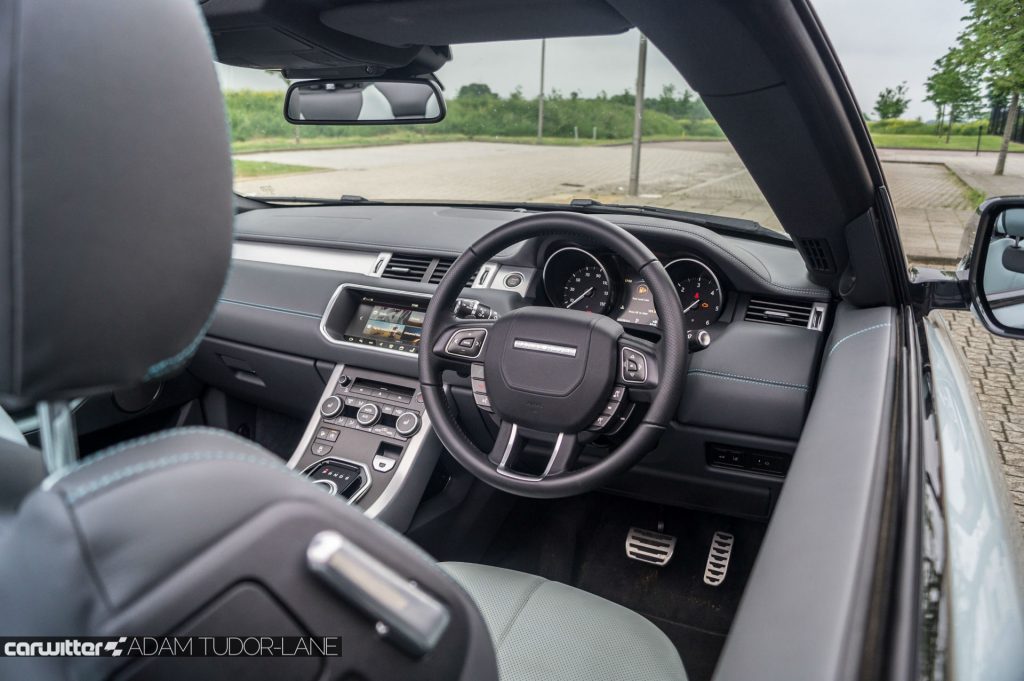 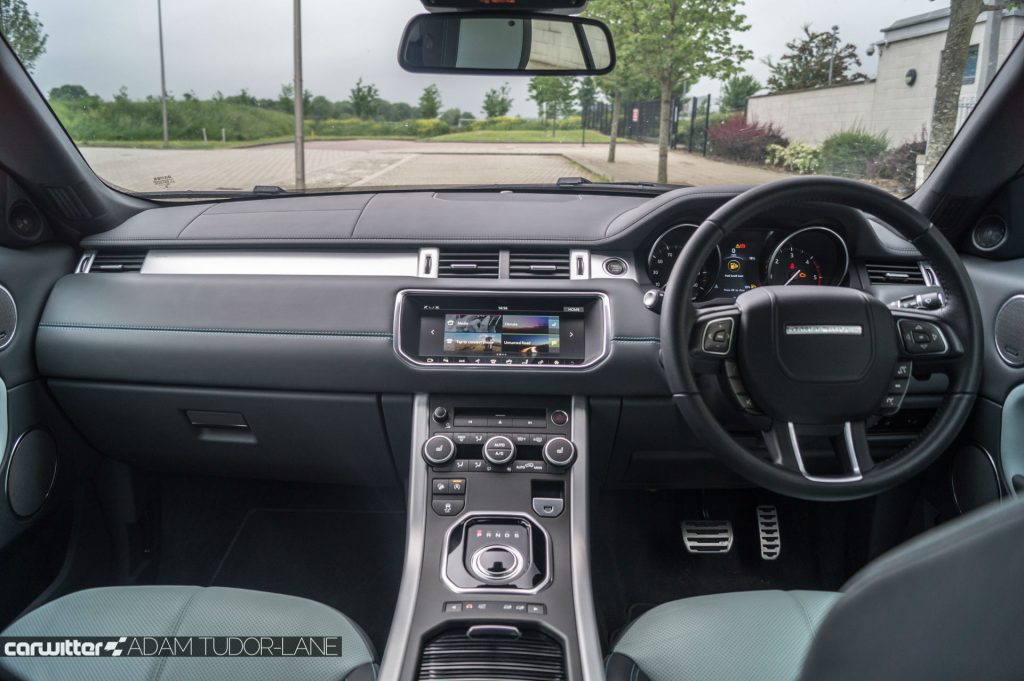 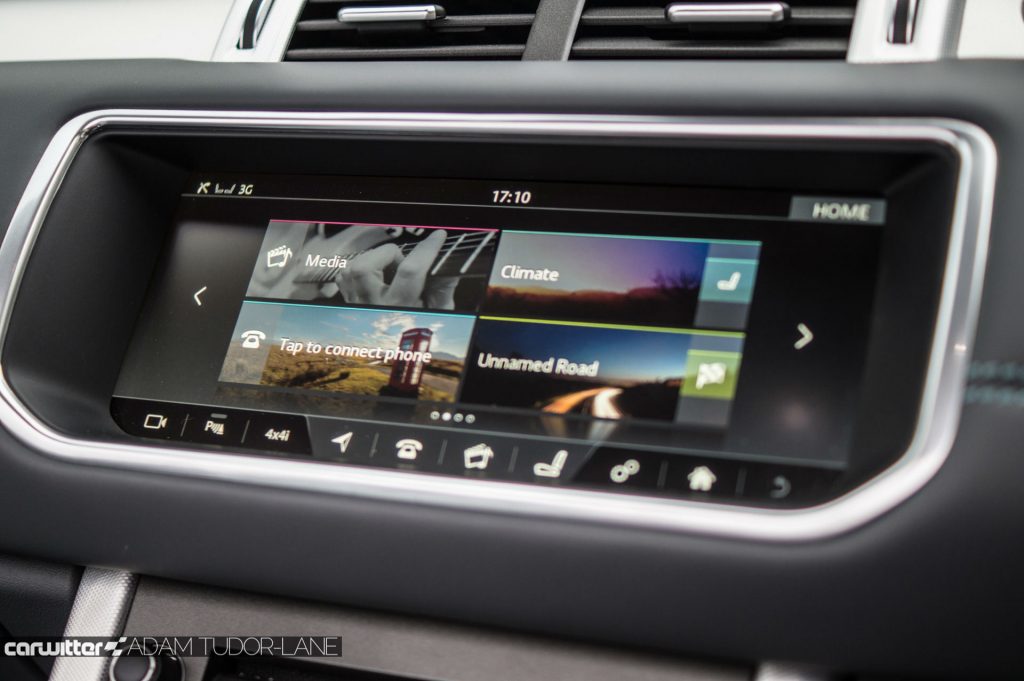 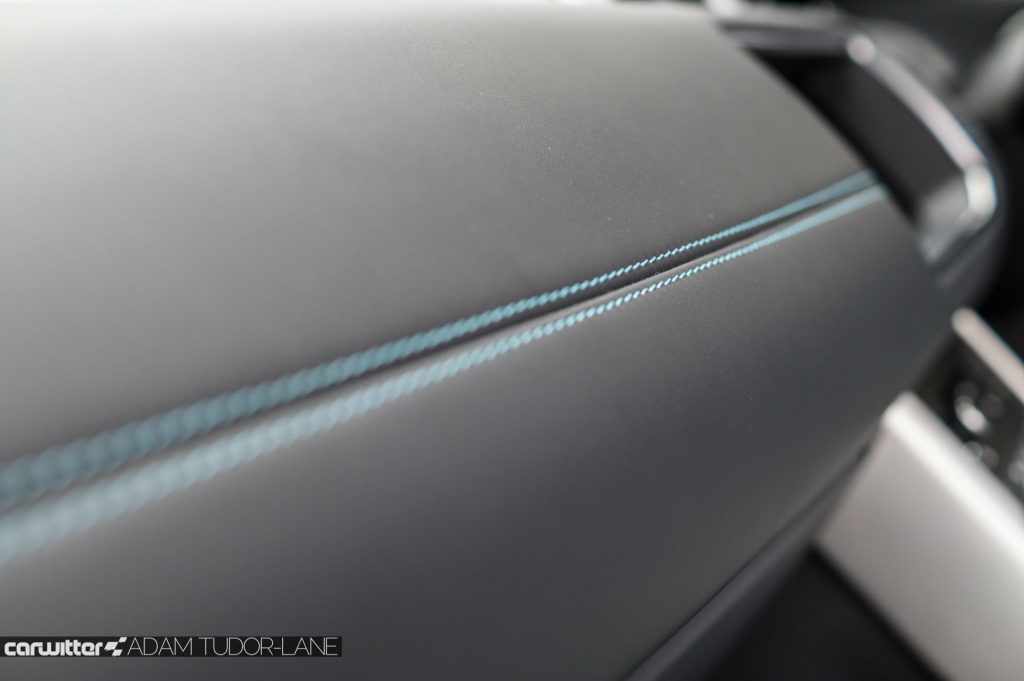 Oh, and the roof can be raised and lowered in just 18 seconds at speeds up to 30 MPH.

It’s also amazingly well insulated, even at motorway speeds you can be fooled into thinking you’re in a tin top. 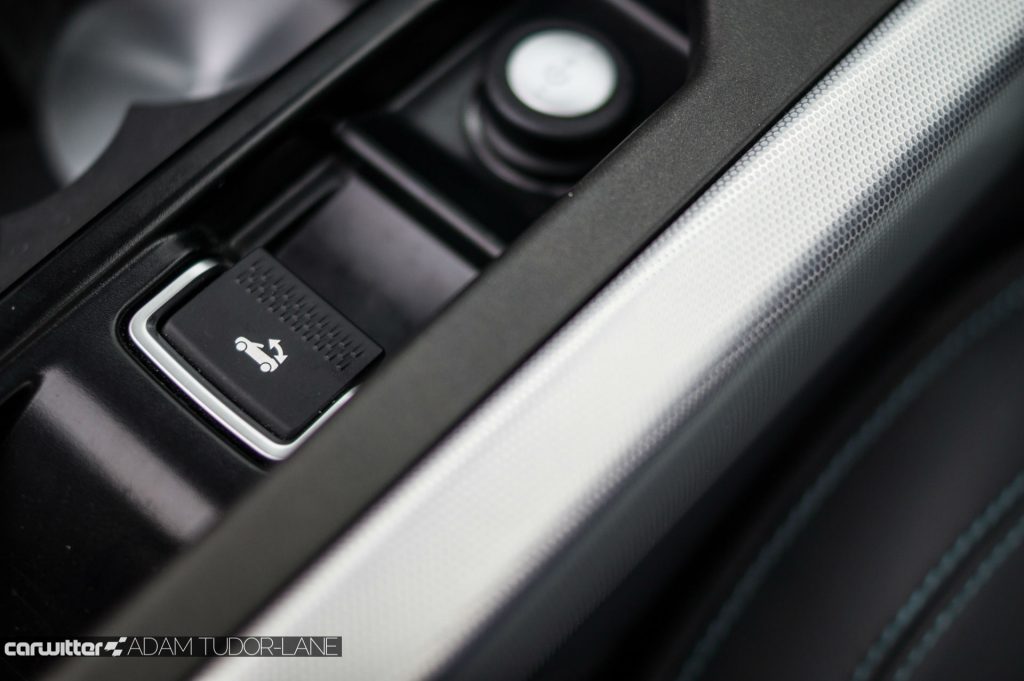 We absolutely love the convertible Evoque.

It’s a toy. A poser wagon. A tractor for Chelsea.

But going off road was incredible. Wading through water, navigating sandy inclines and plugging mud ruts, all whilst having the roof down was such a different, unique experience.

It really saddens us that the most off-roading these cars will likely see is bumping up a kerb. 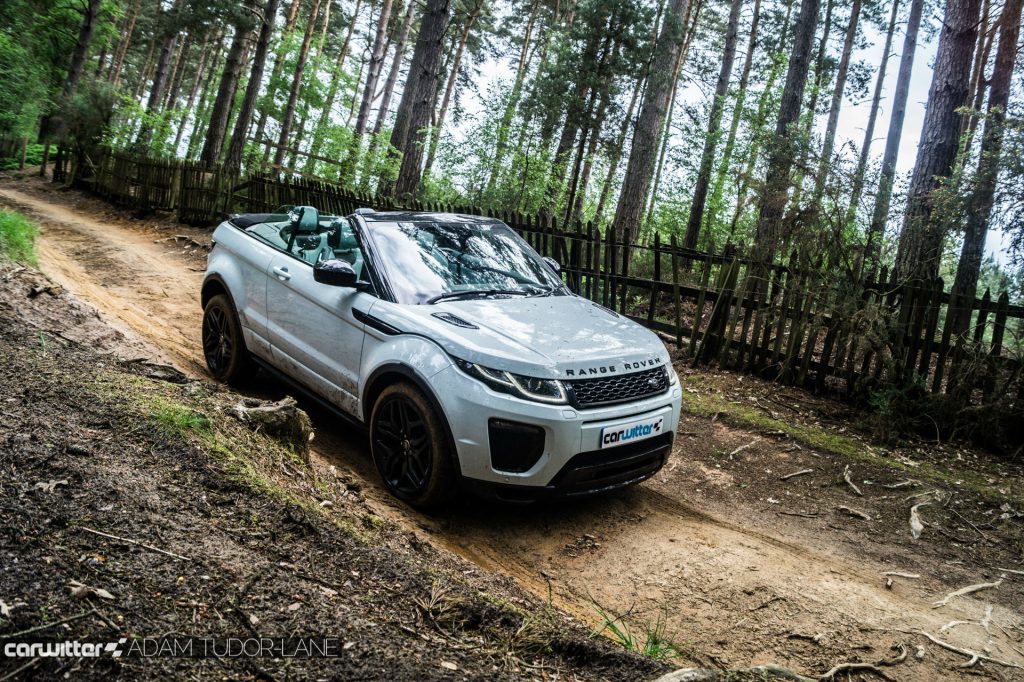 Would we have one?

It would be a weekend toy, purely for taking along green lanes and byways. It would stay covered in mud, apart from a yearly clean.

Outfitted with sump guards, led light bars…maybe even a winch if there’s one that fits. 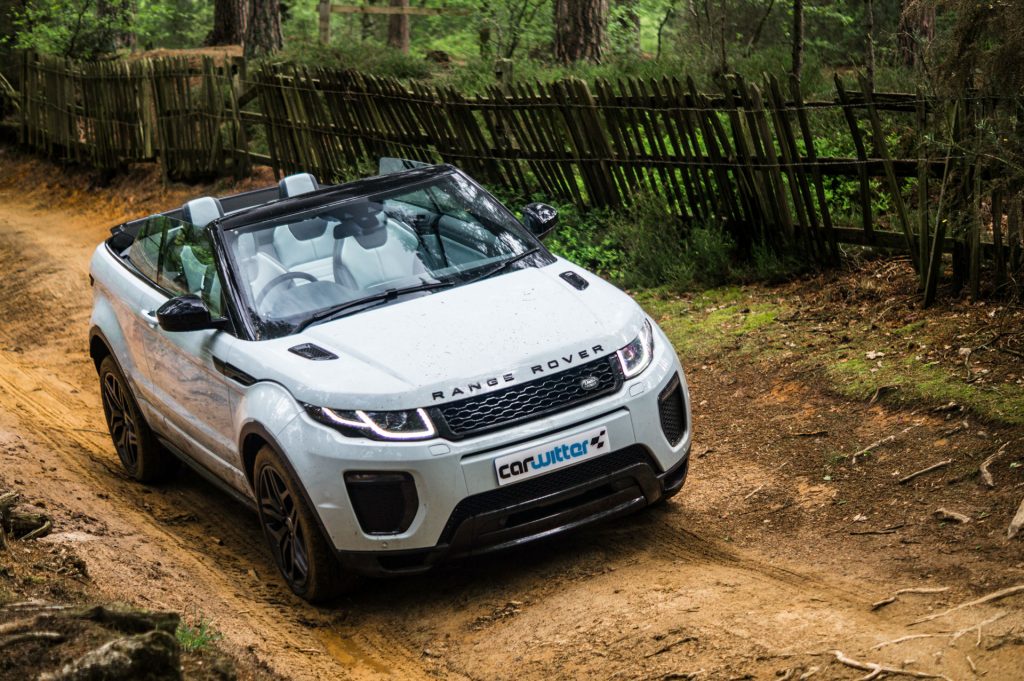 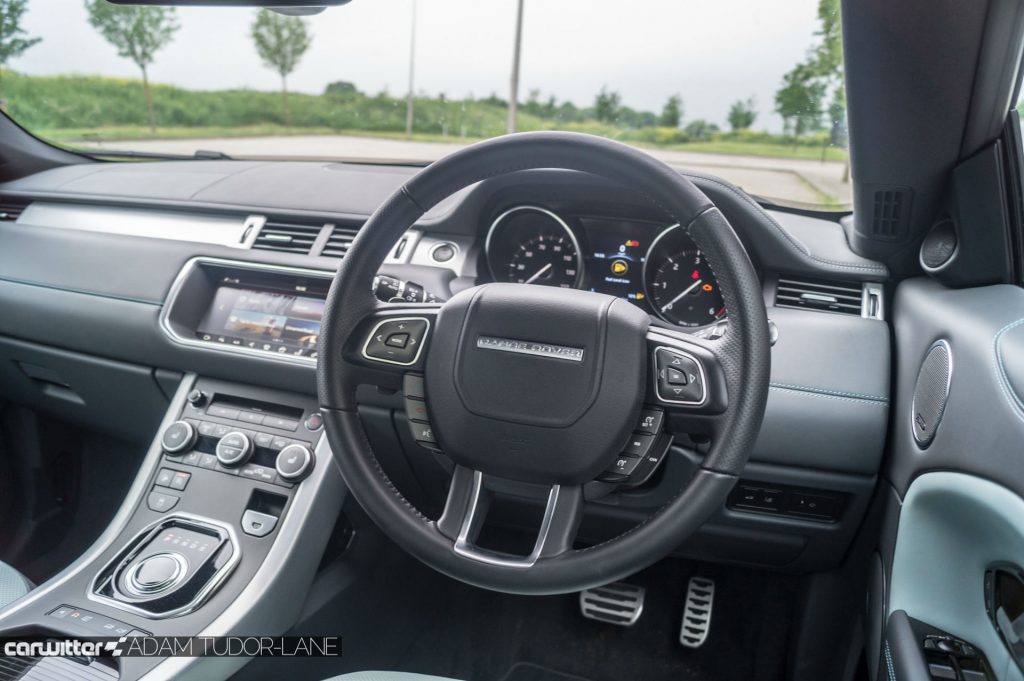 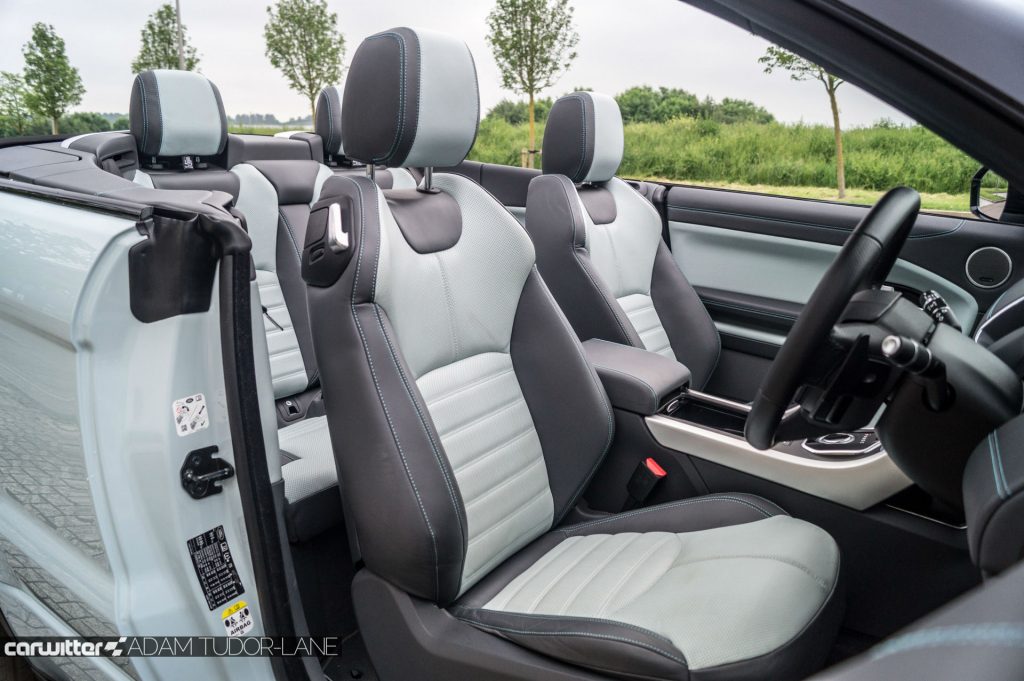 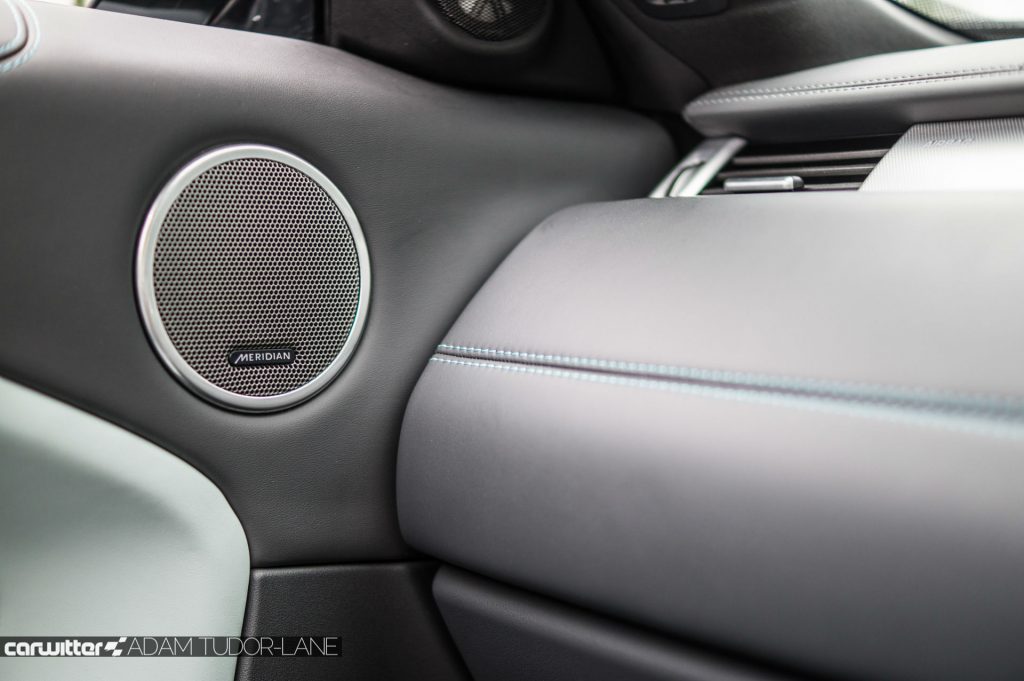 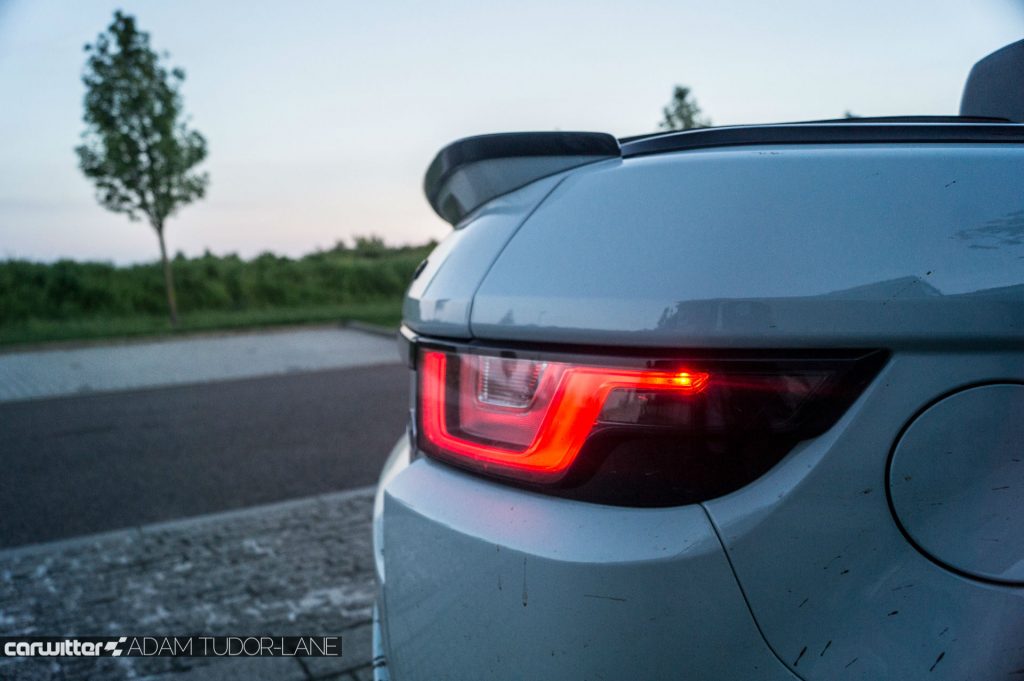